Where the Sidewalk Ends

In the early 2000s, the main buildings of the c.1927 Packard Proving Grounds were saved from ruin and restored as a cool museum, so that they would not share the same fate as the Packard Plant in Detroit. A short portion of the oval test track was also restored, but the rest of the track had been ripped up and turned back to grass long ago. Or so I thought. 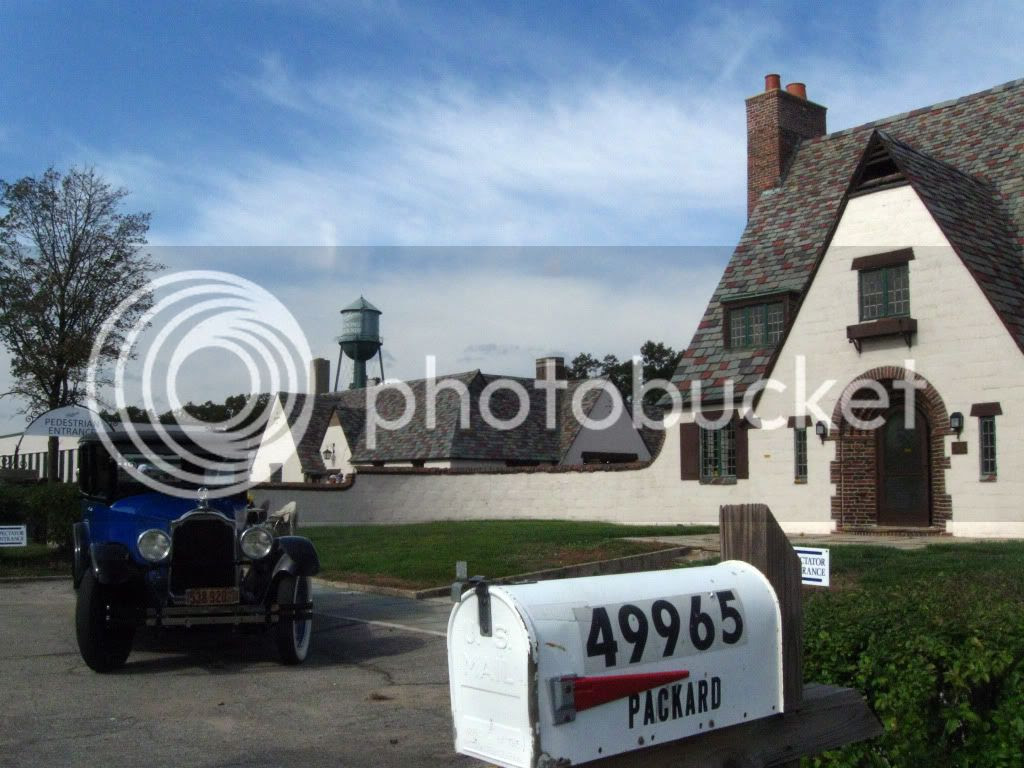 One day while scanning over Macomb County on Google Earth, I noticed that the outline of the old Packard Proving Grounds oval test track was still partially visible. New housing development has also covered much of the old proving grounds, but you can still make out the shape of the oval from above.

Immediately adjacent to the old Packard test oval was what had lately been the Visteon Utica Plant. The plant was originally Ford Motor Co.'s Utica Trim Plant before it was transferred to Visteon Corp., which spun off of Ford in 2000. 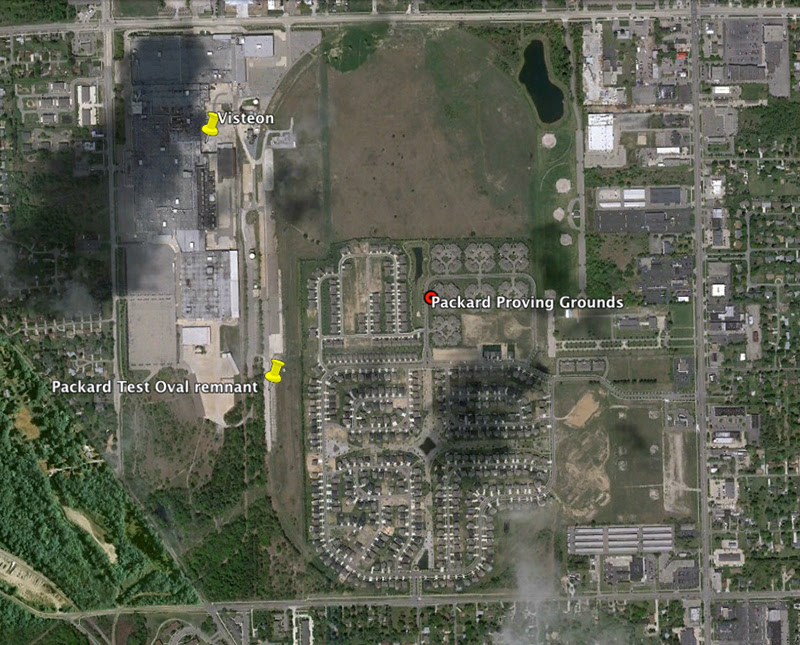 On the map a long, weedy strip of old-looking concrete extending beyond the south end of the Visteon plant seemed to my eyes to be only one thing--a lost fragment of the old Packard test oval. I felt that a closer investigation might yield a fine autumn afternoon's entertainment. 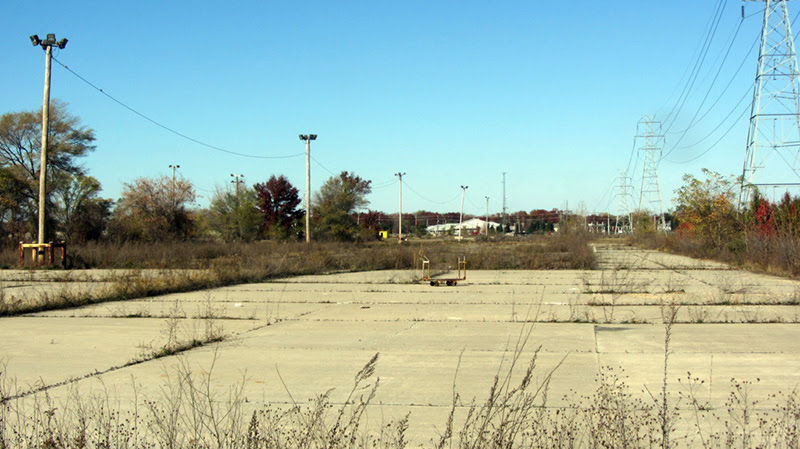 I sort of started in the middle of the parcel by hopping a gate, and found myself on what looked to have once been a parking lot for the Ford plant maybe. It was hard to deny however that the old Packard oval track had been incorporated into part of it, even if it was partially covered in asphalt: 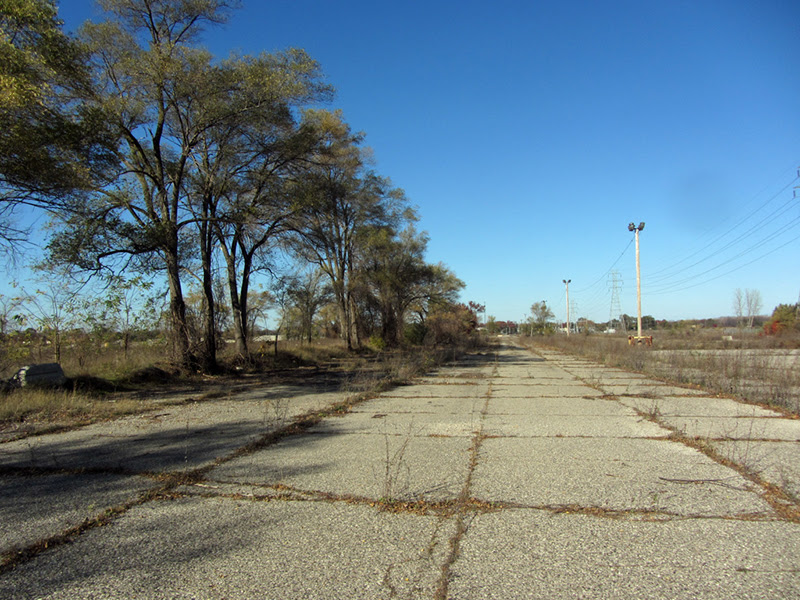 A sign seemed to indicate that this section of the track had been kept around for the purpose of parking semi-trucks on it: 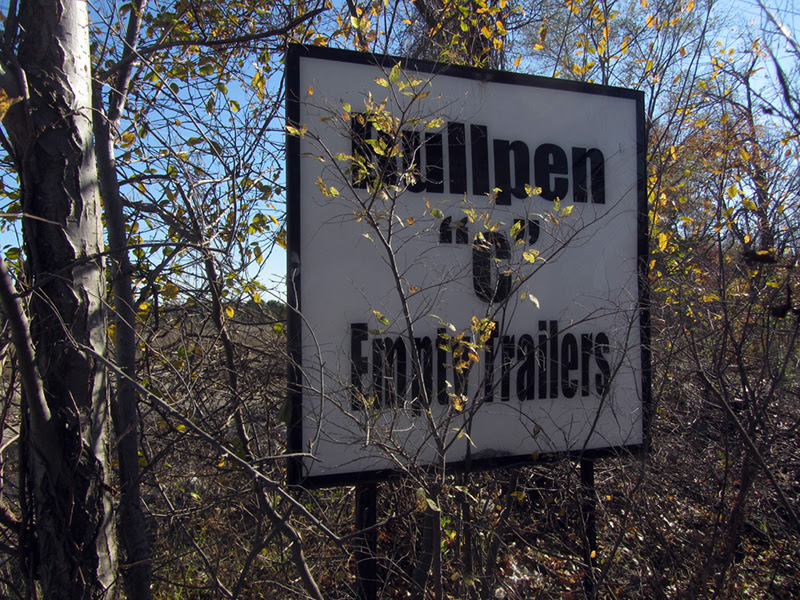 In 1925 Packard decided to build one of the most complete and most advanced testing facilities in the automotive industry, since the days of being able to simply test their cars on the increasingly congested streets of Detroit were coming to an end. They chose rural Shelby Township near the village of Utica as the place to build their new facility, which was one of the first in the business. 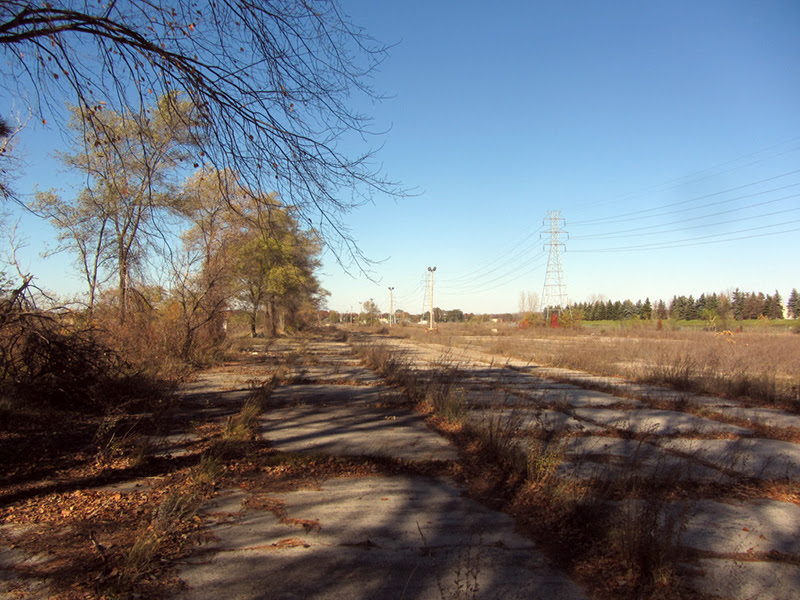 With the improvement of roads in the city by the 1920s, there came a need for dedicated proving grounds to simulate the worst driving conditions that a car could be subjected to, without having to drive cross-country to find them. Ford, GM, and Chrysler all followed suit in building large proving grounds of their own in Dearborn, Milford, and Chelsea, respectively.

According to the Detroit Historical Society, the test oval was so well engineered that drivers could pilot Packards through its banked curves in excess of 100mph without holding the steering wheel. The book Packard by Dennis Adler says that the track was four lanes wide and banked at 35 degrees in the corners. 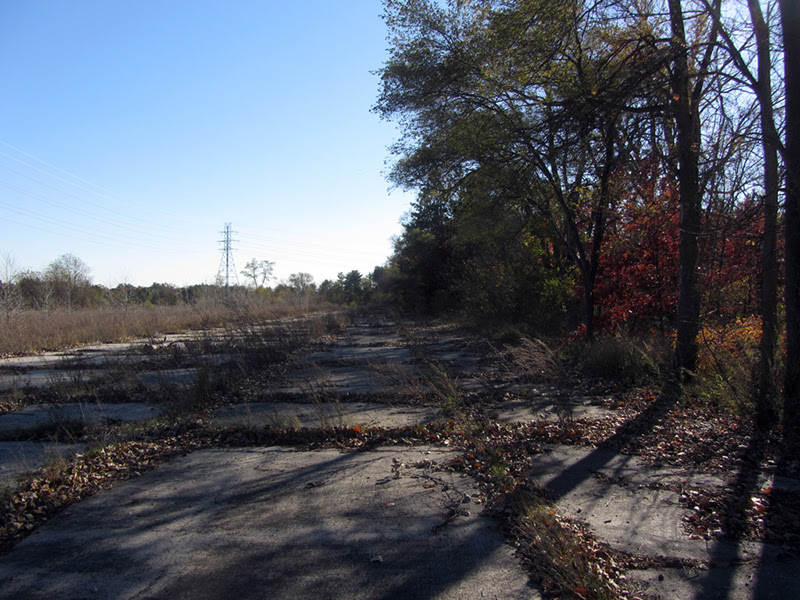 As time went on, another reason for developing closed proving grounds for testing cars came to light--secrecy. As the automobile industry became bigger and profits soared, protecting a company's engineering breakthroughs became important as well, so that they would not be stolen by spies from competing automakers looking to trump the market. I imagine there was also the added benefit of keeping their engineering blunders behind closed doors as well. 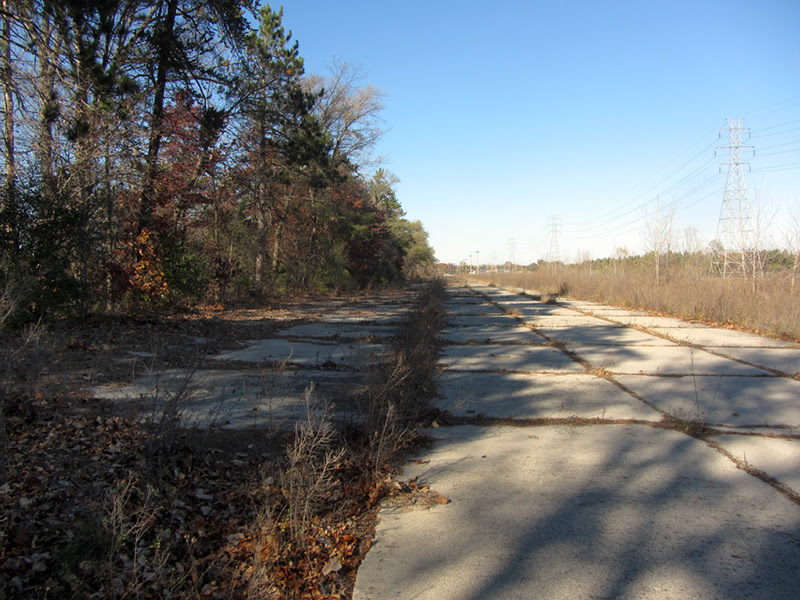 The proving ground consisted of more than just the speed oval--there was a water bath, sand pits, a hairpin course, railroad ties, and "The Hump"--a 50-foot hill in the southwest corner of the site. According to the book Shelby Township by Hilary Davis, Packard-engined aircraft were also tested here, and sometimes even raced against Packard cars. During WWII Davis says that Chrysler leased the Packard Proving Grounds for testing army tanks.

As I was walking along, suddenly the old concrete track came to an abrupt end, just before it would have gone into the banked curve. Hey this reminds me of that one Shel Silverstein poem... 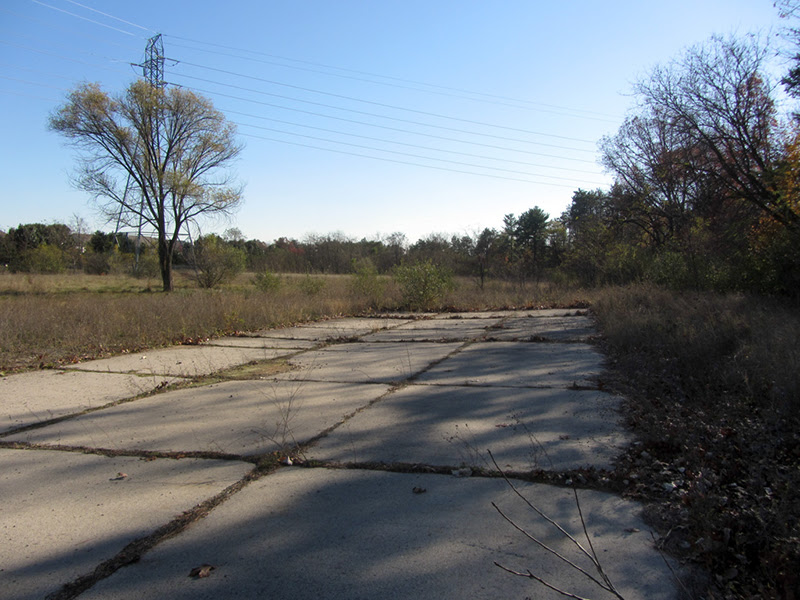 With a walk that was measured and slow, I made my way back toward where the Ford / Visteon plant had been, to see if there was anything left of it. 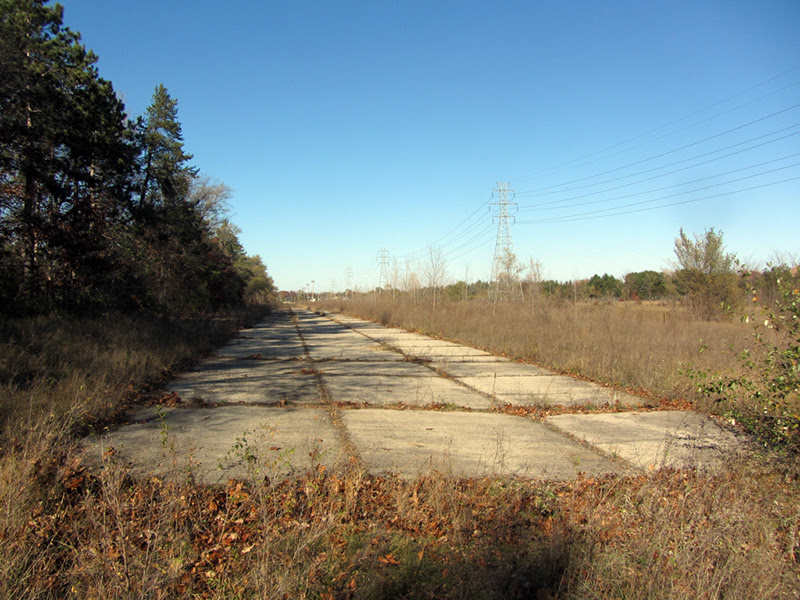 Ford built their Utica Trim Plant in the late 1950s or early 1960s at the same time as their Woodhaven Stamping Plant, their Livonia Transmission Plant, and several others in the outer-ring Detroit suburbs. It was part of the ongoing decentralization of the auto industry from the old inner cities, which took advantage of the cheap open land available in rapidly sprawling suburban areas. 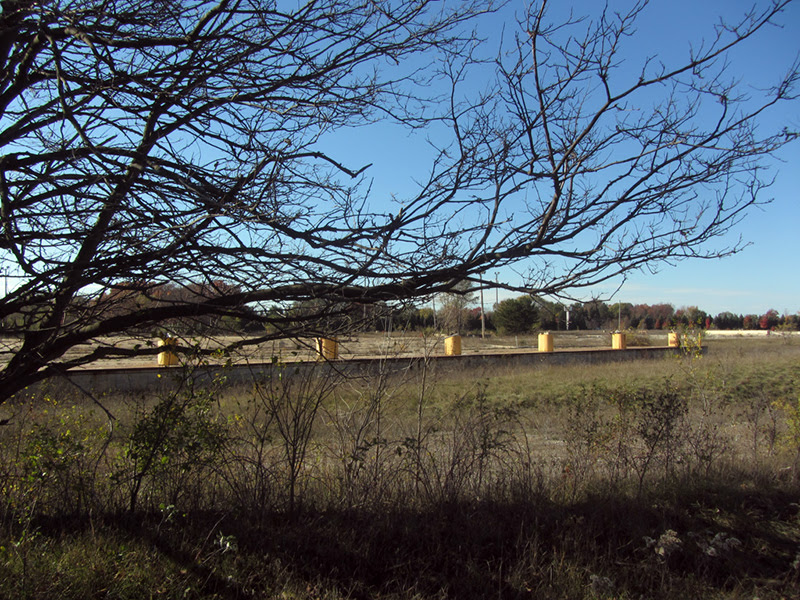 The plant shut down for good between 2008 and 2009 according to the Macomb Daily, and was demolished in 2011, which was when groundwater contamination was discovered in the northern half of what had once been the Packard test oval. 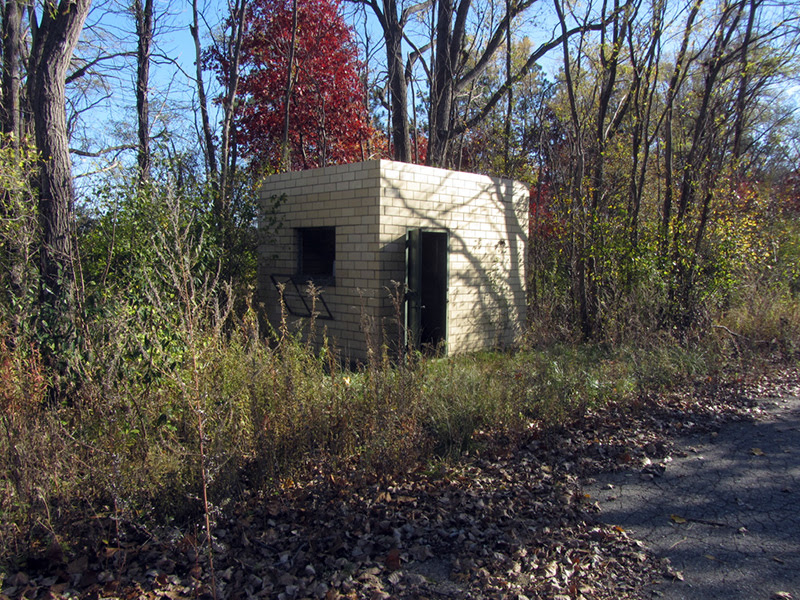 I started to find a series of small brick huts still standing that may have been pumphouses for the plant's wastewater system. One webpage explains how the Utica Trim Plant dealt with its wastewater, which was divided into three categories: deionized water, paint wastewater, and sanitary wastewater. 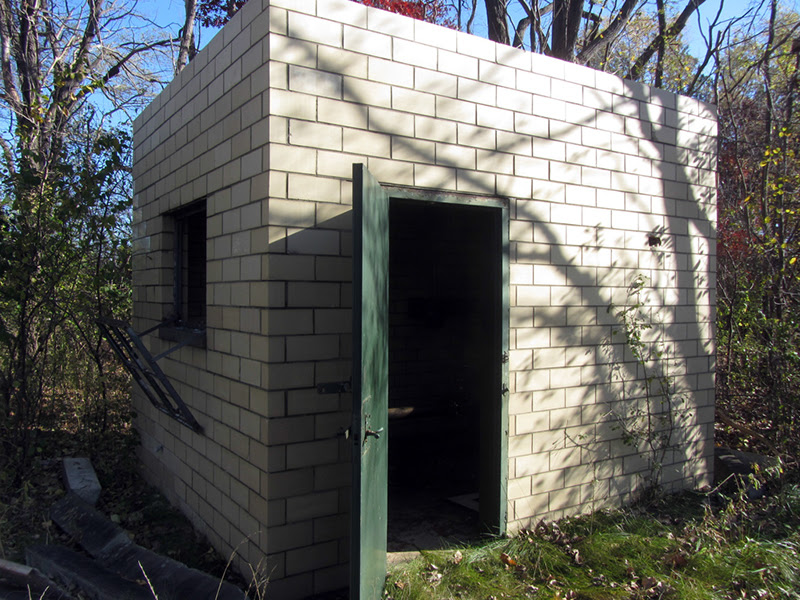 The paint wastewater and sanitary wastewater were blended and treated in a way that supposedly reduced its pollutant level by 99.3%, allowing it to be discharged to polishing ponds, and then to the Clinton River. Surprise!--it apparently was not a perfect system. 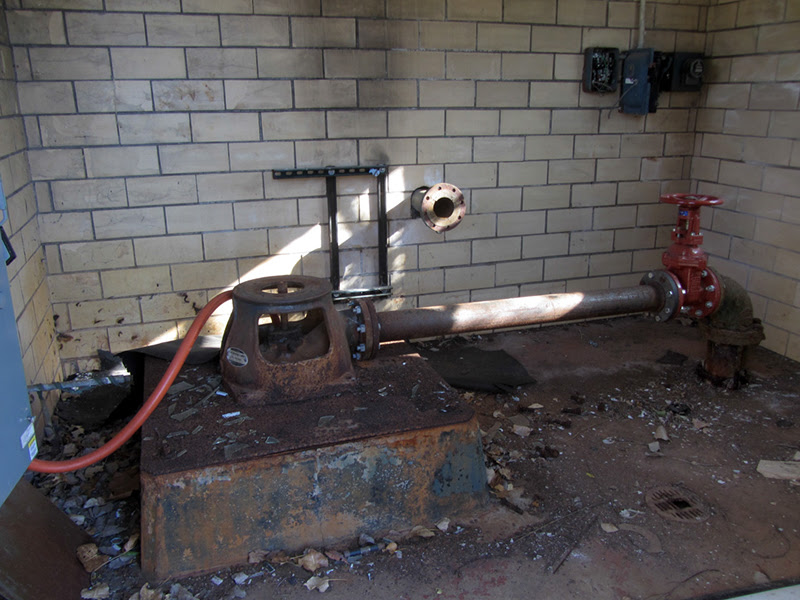 The old-timey painted lettering on this pipe leaning in the corner marked it "FMC WATER DEPT, DO NOT REMOVE." I am guessing that FMC stands for Ford Motor Company. 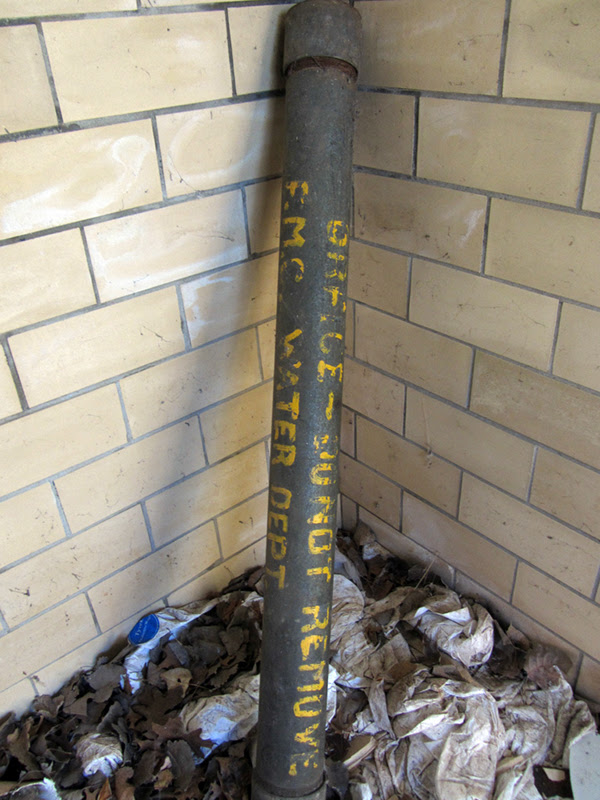 A second, identical hut presented itself deeper in the woods. 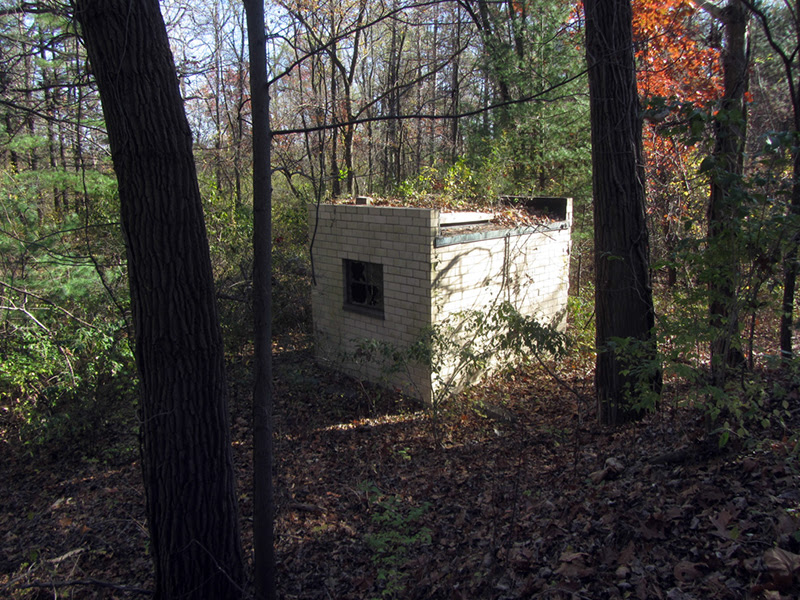 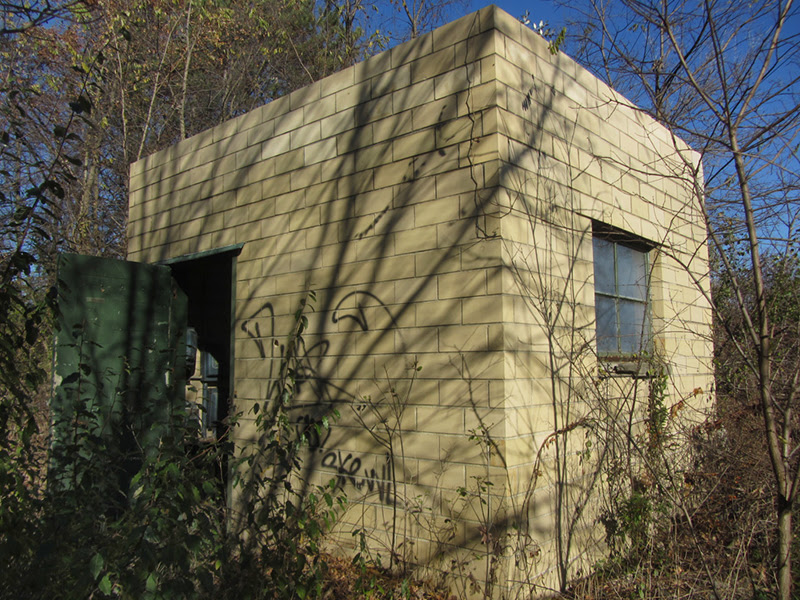 A third and fourth hut soon also appeared further down the service road. 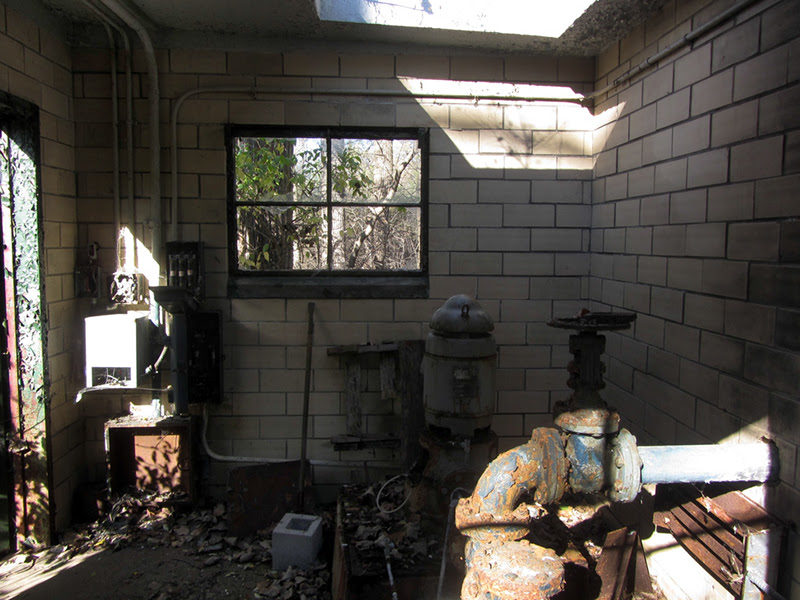 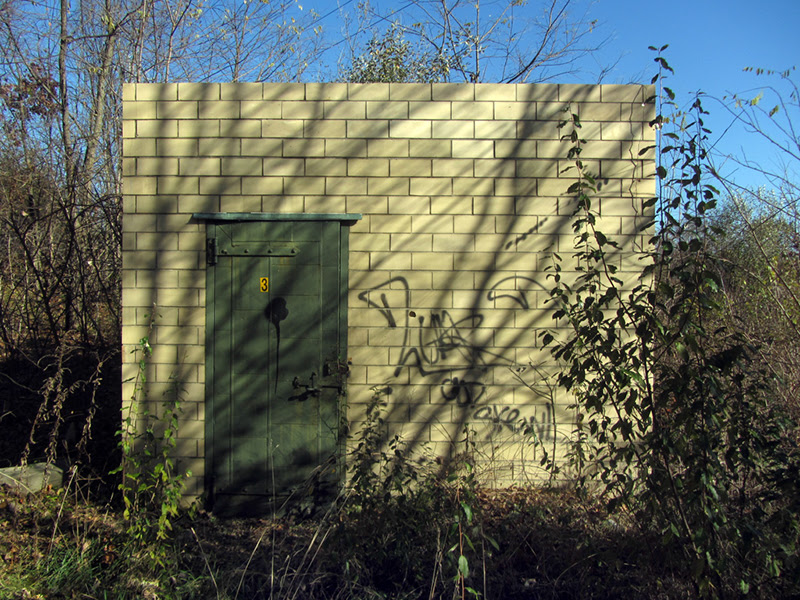 Speaking of the Clinton River, a mere couple blocks away from the edge of the Packard test oval runs a sluggish little creek that was once known as the Clinton-Kalamazoo Canal, a failed project that had its origins in the early 1800s when westward expansion was dawning and the Erie Canal brought settlers from crowded New England out to the Michigan frontier in droves. Ground was broken in Mt. Clemens in May 1838, but the project stalled indefinitely in 1842.

I started hiking over in that direction to see if I could find it. 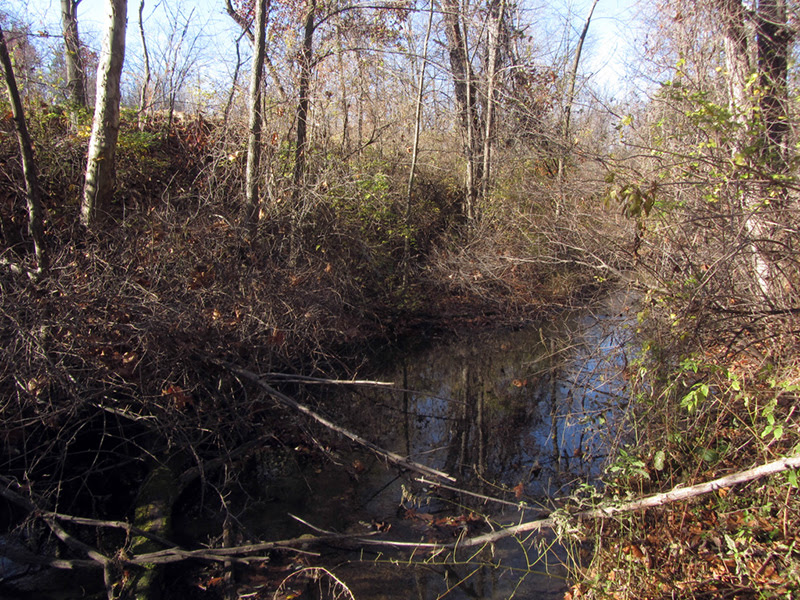 The principle was basically the same as the Panama Canal--in order to avoid sailing all the way around the Lower Peninsula of Michigan, a canal would be dug across the bottom of the Mitten to join the Clinton River on the east side of the state with the Kalamazoo River on the west side. 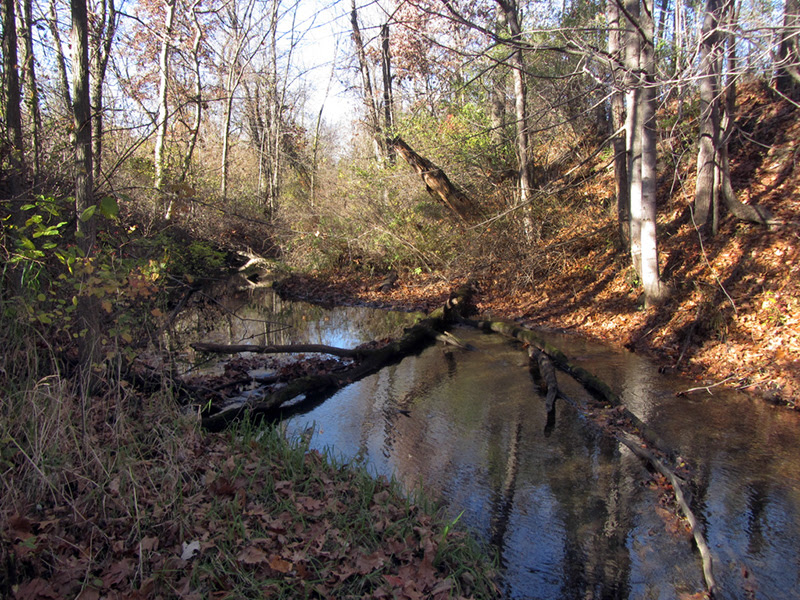 This would link Lake St. Clair to Lake Michigan, providing a direct route from Detroit to Chicago, allowing goods to be moved by barges over land much more safely than by navigating the fitful maelstroms and treacherous shoals of the Great Lakes, whose wilderness coasts had yet to be marked with many lighthouses. 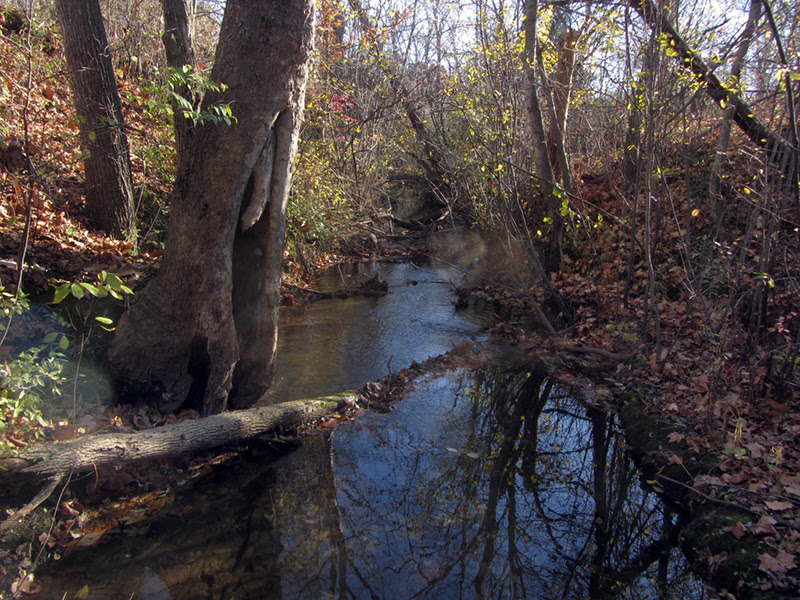 According to Hilary Davis, the state of Michigan spent nearly $400,000 to build the Clinton-Kalamazoo Canal, but due to failed financing only 16 miles of it was ever completed, from Mt. Clemens to Rochester, despite the canal idea having more public support than a state-financed railroad. It has been left to become overgrown pretty much ever since.

The water level here is much lower now than it would normally have been if it were going to be used to float barges. 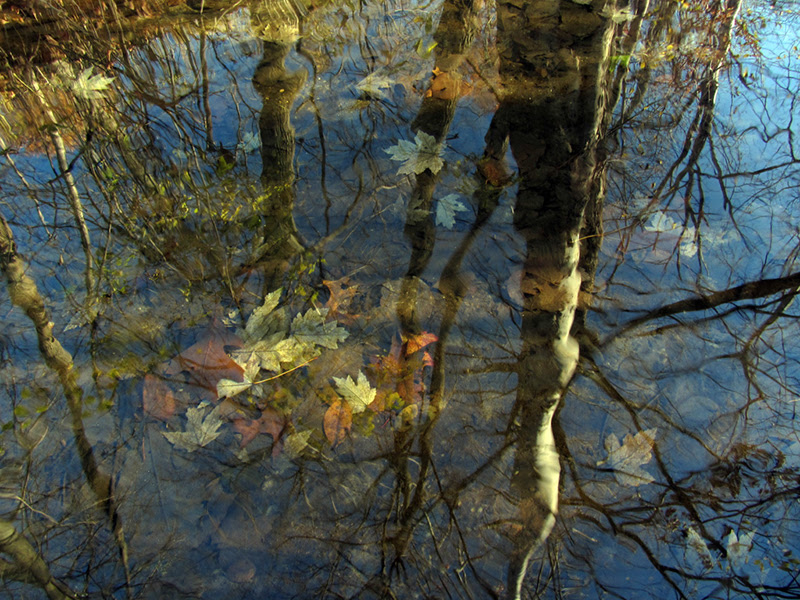 Michigan historians Willis Dunbar and George May note that canal boats were actually operated along this stretch between Mt. Clemens and Utica for a brief period. They also state that a second canal was planned to cut across the "extreme northern fringes of settlement" by joining the Saginaw River with the Grand River, but only a very small portion of this "Saginaw-Grand Canal" ever came to fruition. 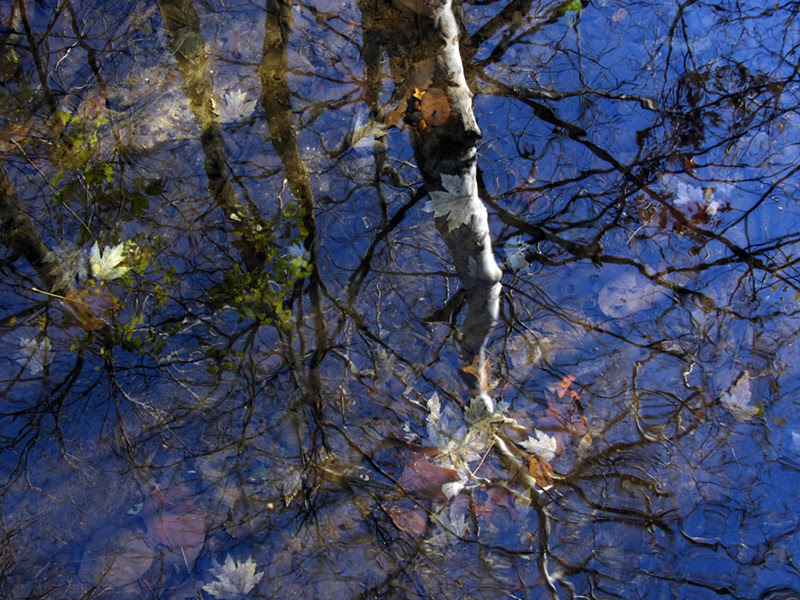 Apparently there are other remnants of the Clinton-Kalamazoo Canal closer to Rochester that I missed. These three photos were taken by Panoramio user MtBike2350 of ruins along the Oakland County sections of the canal:

The canal also follows an old branch of the railroad, and when the going got too tough in the brush, I jumped up on the old tracks for an easier walk back to my car. 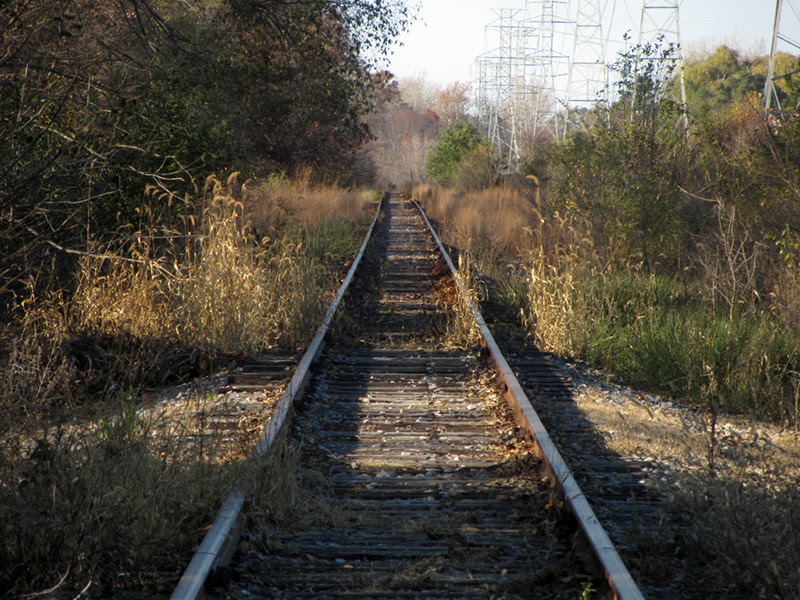 I believe this line might have led to the spur that served the aforementioned Ford / Visteon plant, which might explain why it looks so disused. It also led to another old wooden viaduct that crossed the canal itself. 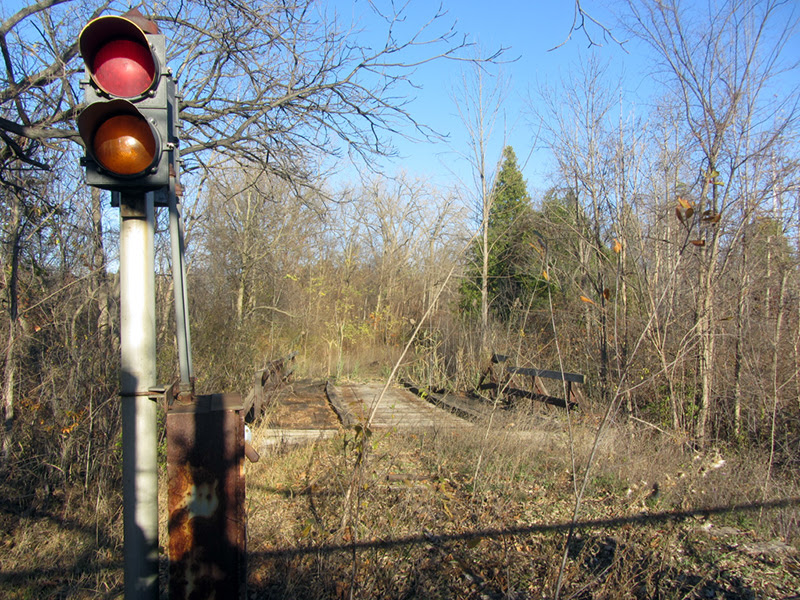 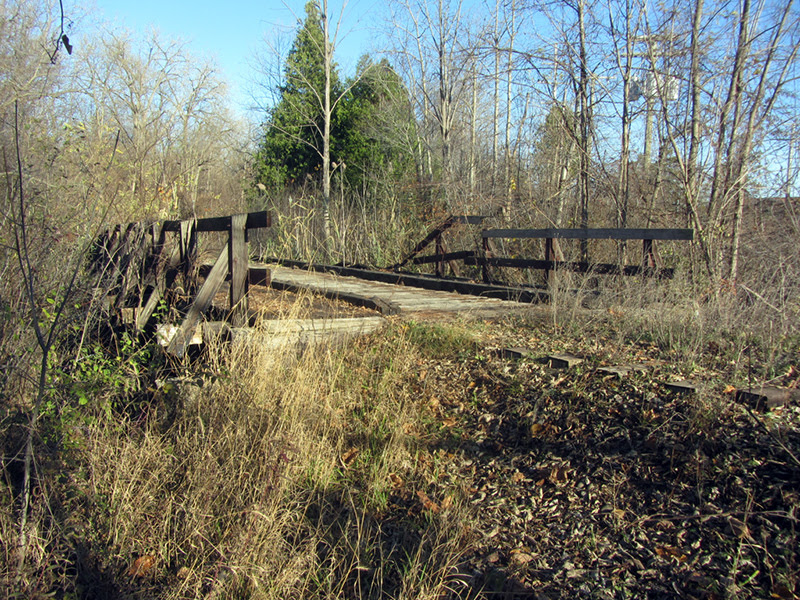