The Bridges of Midland County

Of all the Michigan counties that have proved to be the most challenging as far as finding something abandoned or in ruins, but still interesting enough to bother photographing or writing about, Midland County might just take that title. Finally I came across a nifty old railroad trestle spanning the Tittabawassee River that would fill the bill. 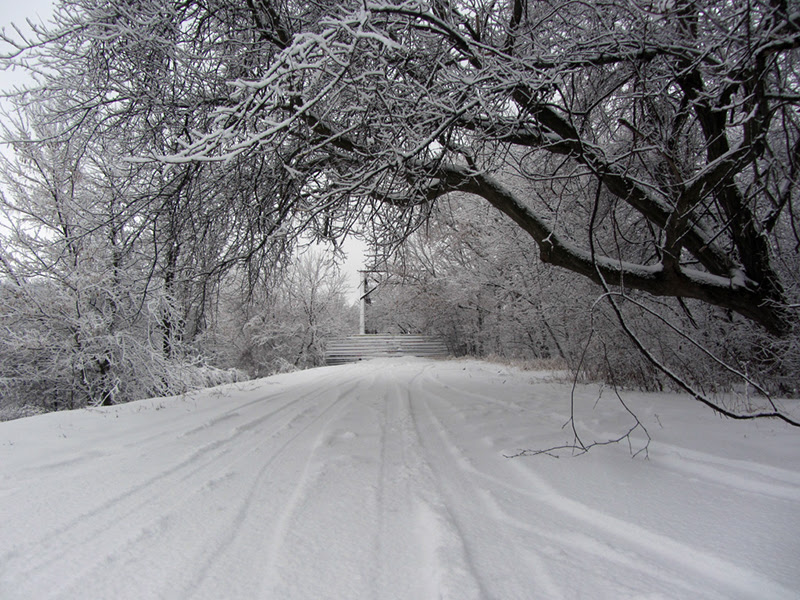 On a midwinter road trip with Navi to the Tri-Cities region, we decided to check this one off the list despite road conditions that made the prospect of facing an ISIS beheading look like an attractive offer by comparison. The wintry glaze of snow on everything turned out to be a stroke of terrific luck as far as photography was concerned, by way of accenting every inch of dark black steel with a coating of contrasting pure white. 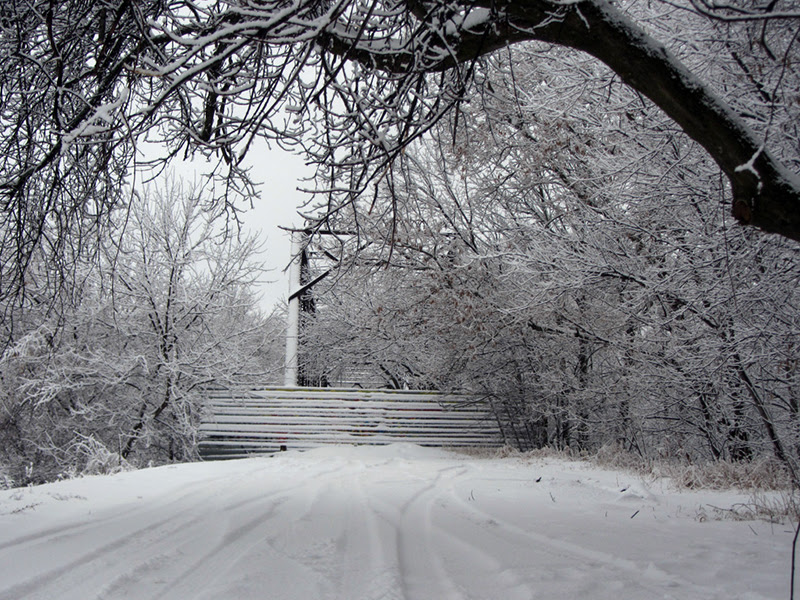 Maps label this road as Bailey Bridge Road, so naturally I assumed that this must be the name of the bridge that it crossed as well. David M. Brown however seems to mark this bridge as the "Smith's Crossing Bridge" in his Michigan County Atlas, where a settlement named "Mapleton or Smith's Crossing" had once been. 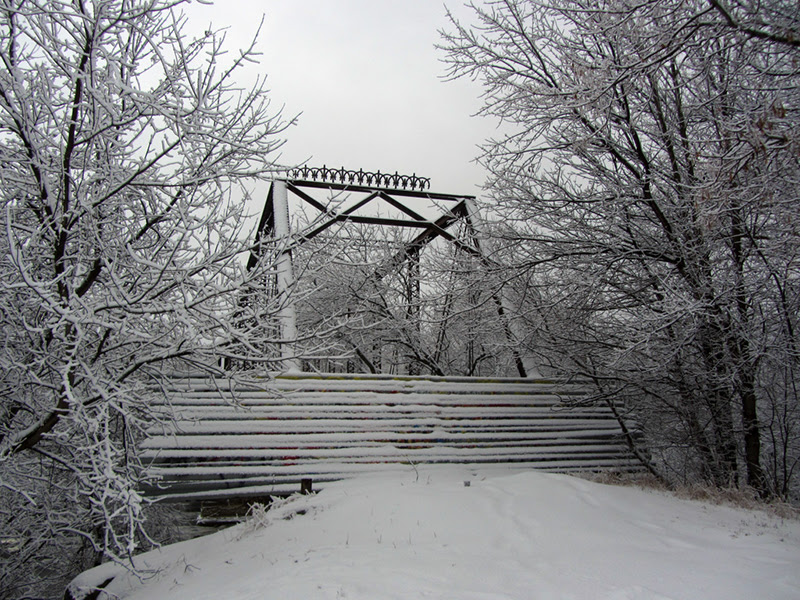 Brown's description of the town of Smith's Crossing says that it started out as "Smithville," with a depot on the Pere Marquette Railroad and a post office from 1872 to 1873. Smithville's name was changed to Smith's Crossing in 1890, and the post office closed by 1911. Michigan: A Centennial History of the State and Its People, by George Newman Fuller shows that the town name had changed again to Mapleton sometime before 1939. 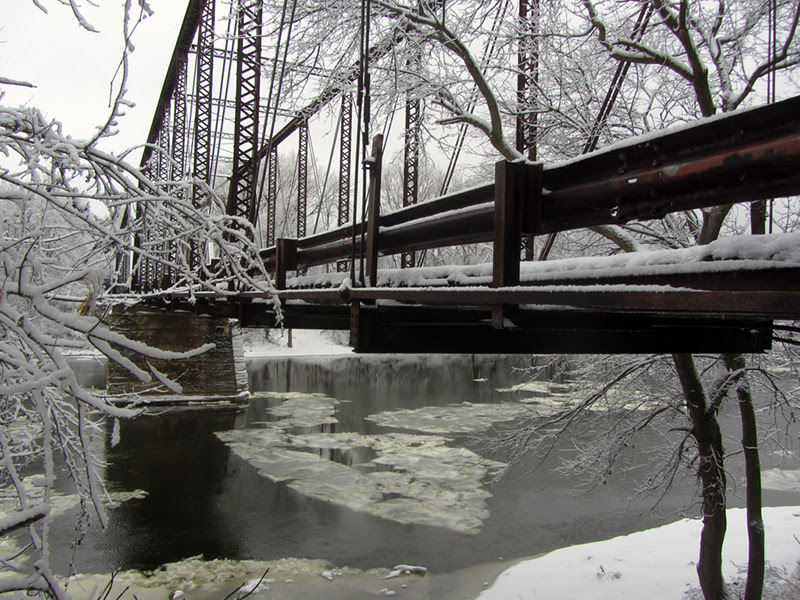 Midland County itself was surveyed in 1832. It had been an aboriginal dwelling place for millennia, and later the Ojibwa and Potawatomi tribes too dwelt here in numbers at what was called "The Forks," where the Pine River and Chippewa River joined to form the Tittabawassee River. Before the Treaty of Saginaw in 1819, very few Europeans had really ventured into the area, Brown says. It was not organized as a county until 1855. 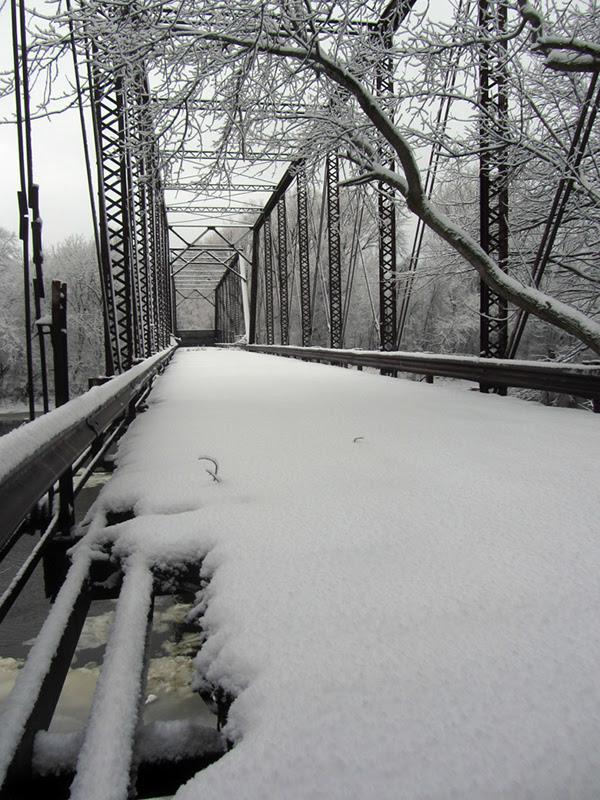 The Tittabawassee River joins Shiawassee River to form the Saginaw River, and Virgil J. Vogel, author of the book Indian Names in Michigan, translates its name to "the river that runs along the line." He explains that describes how the Tittabawassee runs parallel to the shoreline of Saginaw Bay, instead of straight into it. 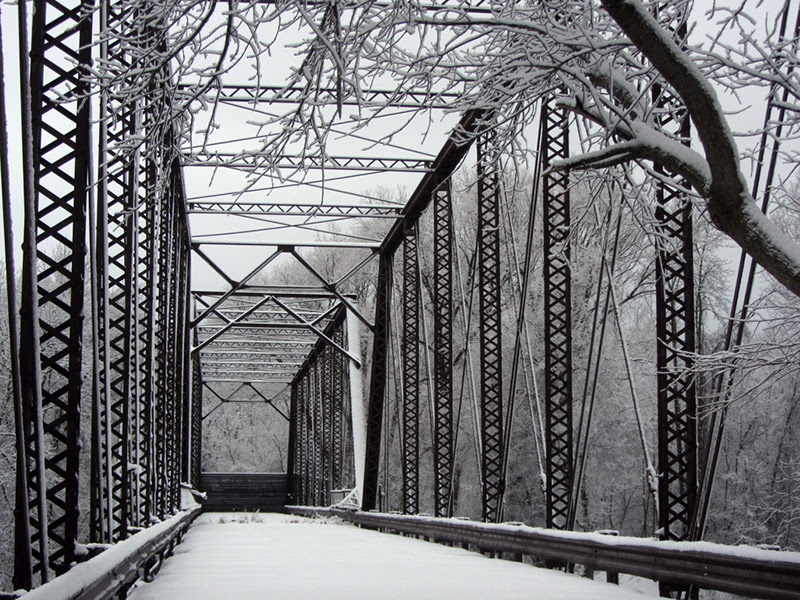 Once the logging boom took off, every river in the area was dotted with lumber camps, and agriculture followed soon after. But Midland County really came into its own after Michigan's first salt well was delved nearby in 1878, and by 1897 Herbert H. Dow had founded the Dow Chemical Co. here. Today Dow-Corning is one of the largest chemical producers in the world, and it remains headquartered just upriver from this bridge, in the city of Midland. I talk more about the Michigan chemical industry in another post. 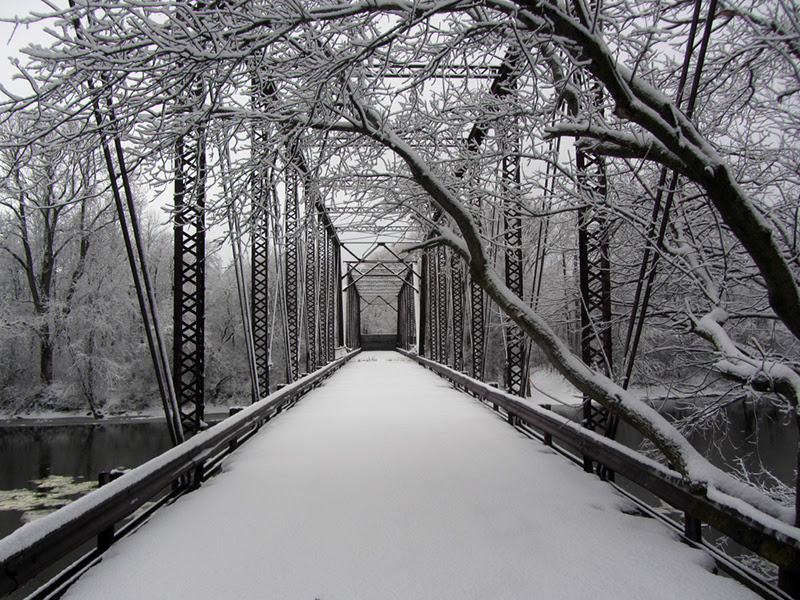 I was a little bit nervous about stepping onto the snow-covered deck of the bridge, since it was almost impossible to see what kind of condition it was in, except for the occasional gaping hole. It appeared to have last been paved with asphalt. 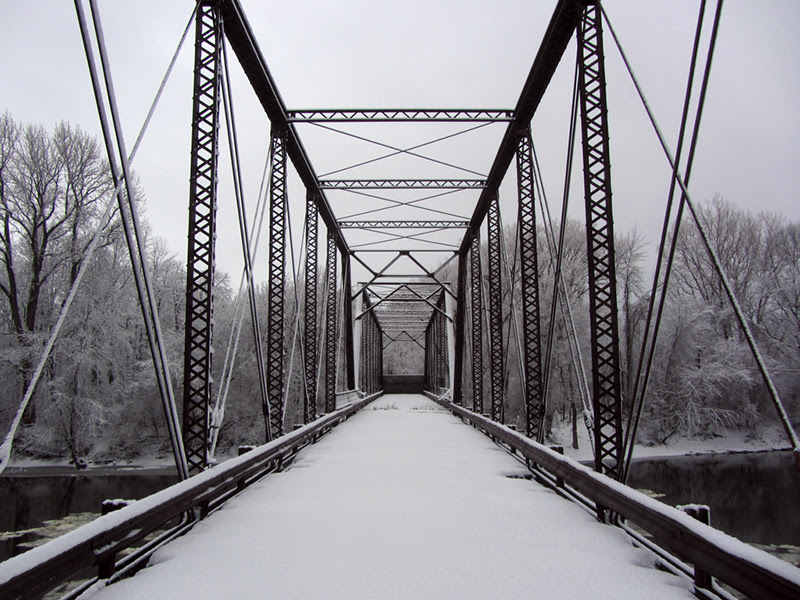 As it turns out this bridge is fairly significant from an engineering history standpoint. HistoricBridges.org rates it a 7 out of 10 on their national historic significance scale, saying that it is a "rare example of multi-span highway truss bridges in Michigan." 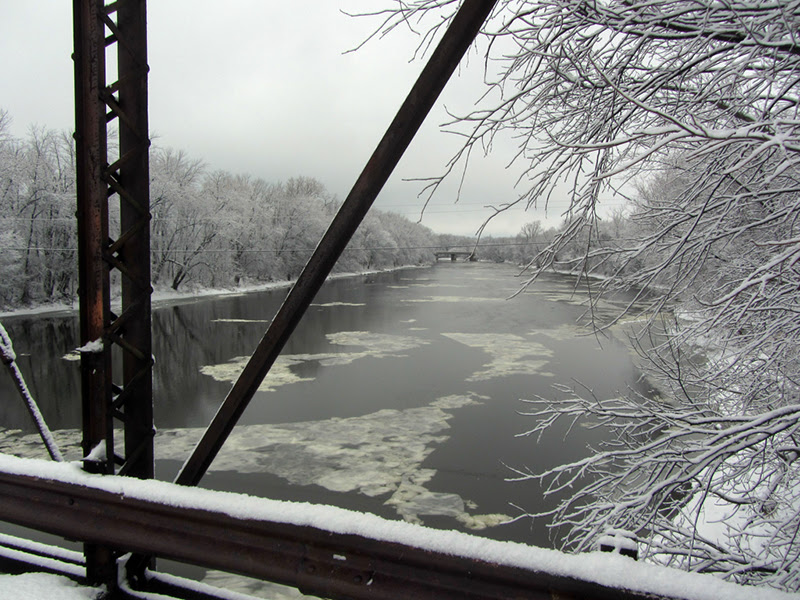 The Historic American Engineering Record (HAER) says that this 300 foot bridge was built in 1907 by the Joliet Bridge & Iron Company of Joliet, Illinois, with J.C. Reifenberg as engineer.

HistoricBridges calls this a "pin-connected, Pratt-through-truss" type bridge, with lots of V-lacing present on structural members, and some sections of the lattice railing are even still intact, as seen here: 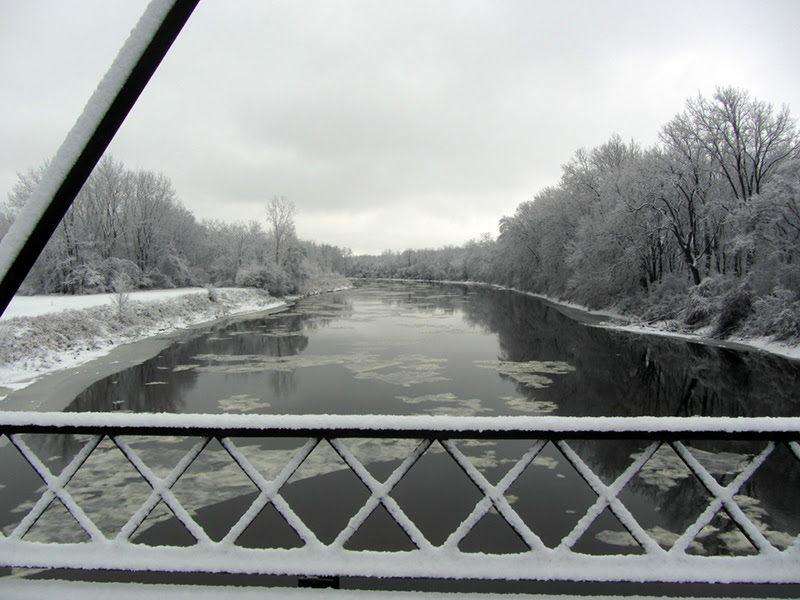 The bridge is currently barricaded with steel to keep people off it: 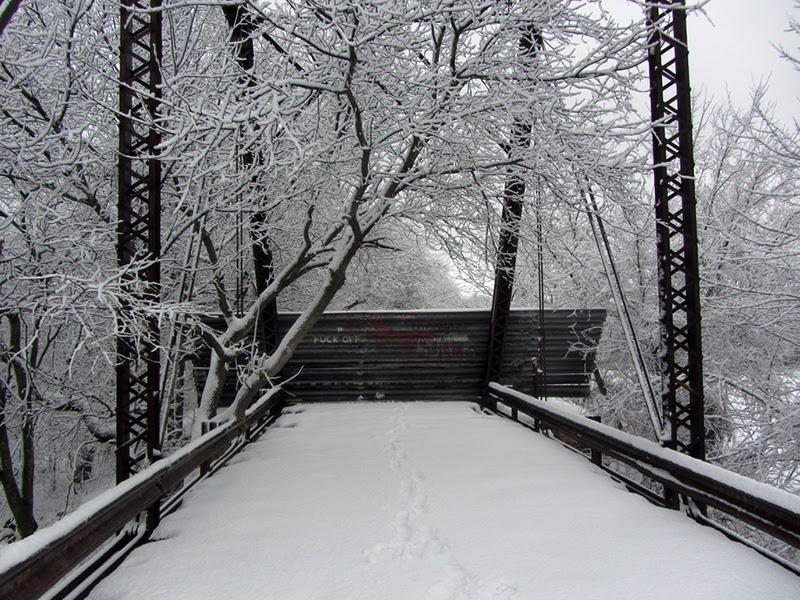 There has been talk of restoring this bridge for non-automobile traffic use however. 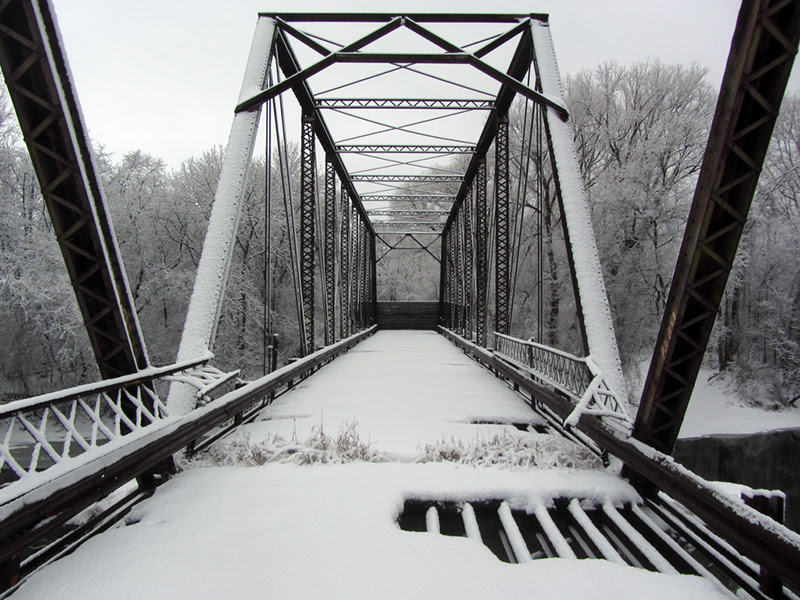 I climbed down underneath for a look at the footings. 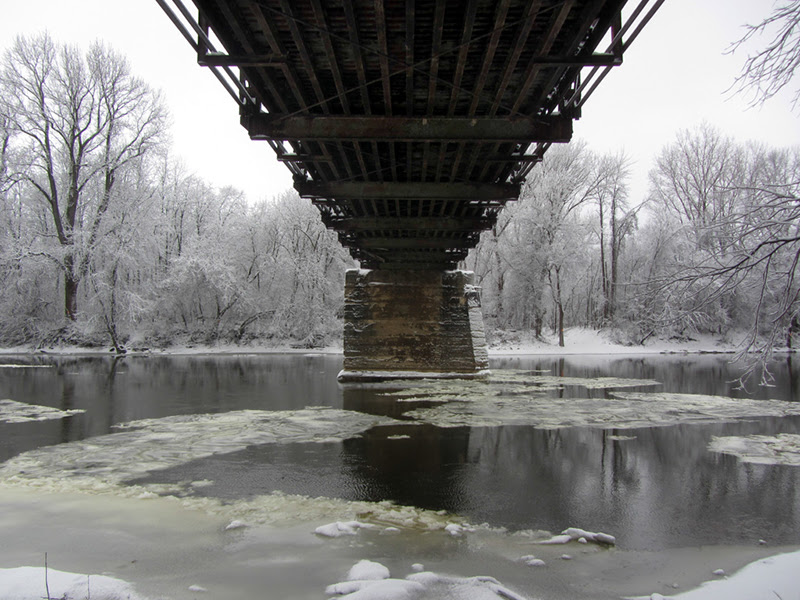 Looks like some local kids are repping the 989 area code HAM: 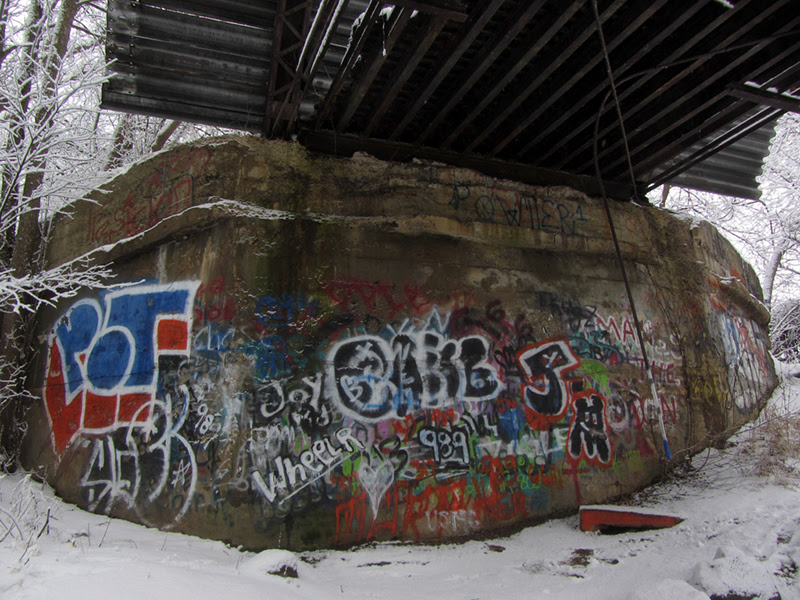 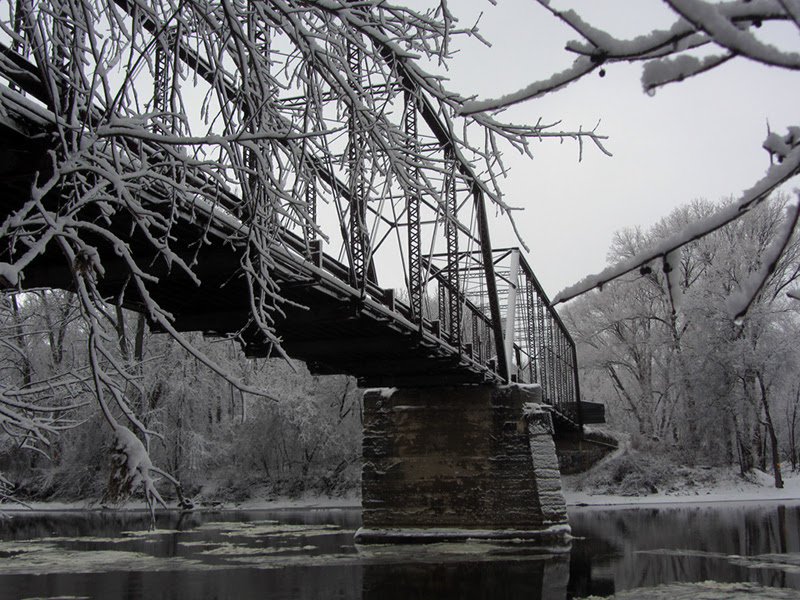 One of the coolest features, I thought, was the presence of this last bit of frilly iron lace that has decorated the top of the span for the past 108 years: 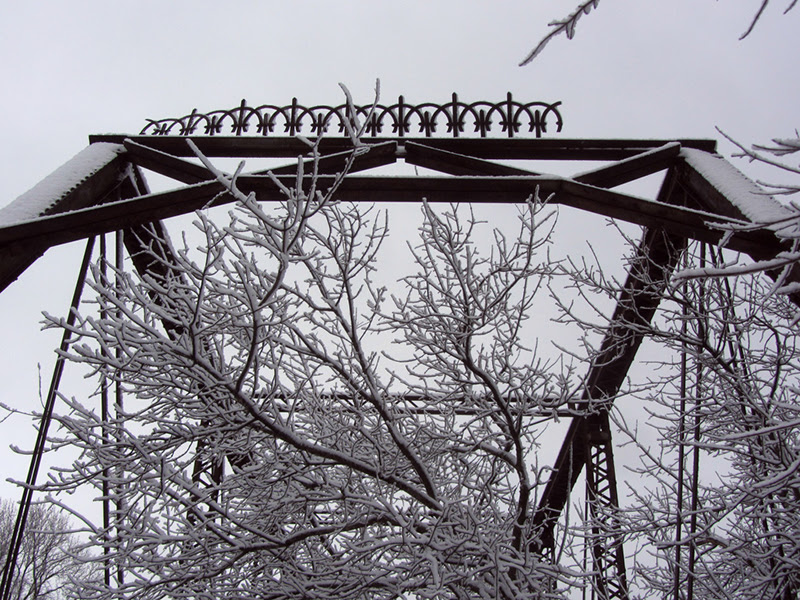