Probably 90% of my trips to the Brewster-Douglass Projects meant heading up in the 14-story towers to enjoy the view from the heights, and as a result I never got to explore the older six-story buildings at all. When demolition started to become a topic of discussion in the papers, I made the effort to get over to them while I still could: 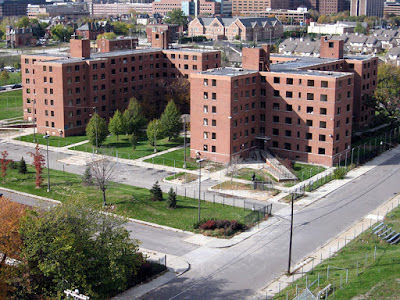 My Canadian homie Navi accompanied me on this frigid winter's day as we both made our cursory once-though. 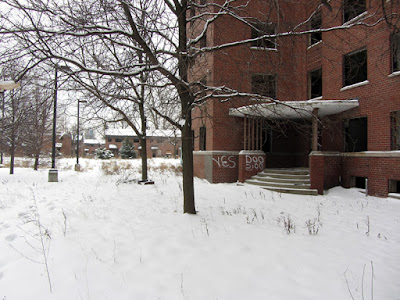 It became evident to us that I was no different from the norm, as these two smaller buildings had apparently been less frequented by explorer types on the whole; there was less graffiti and vandalism, and I couldn't really remember having seen anyone else's photos of the place online. Naturally, being slightly off the beaten path sure didn't deter any scrappers however. 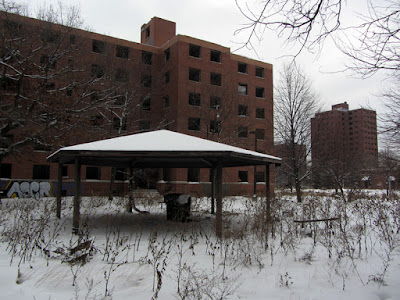 Again, the first phase of the Brewster Homes started admitting residents in 1938 and was completed in 1941, with a total of 941 living units according to professor Ren Farley. These two six-story buildings were erected as the first phase of expansion onto the original Brewsters, and they were built in 1942. The 14-story Douglass Towers and row homes were added from 1950 to about 1954. 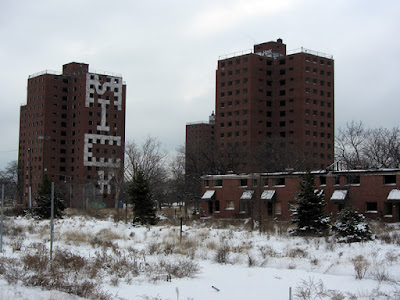 There are a couple historic photos showing what the original Brewster Projects looked like, in Wayne State University's Virtual Motor City Archives. Here is an aerial shot showing the new projects as they were being completed:

At the righthand side of that shot you can see the Brewster-Wheeler Rec Center for reference, and Hastings Street running all the way up past St. Josephat Church. 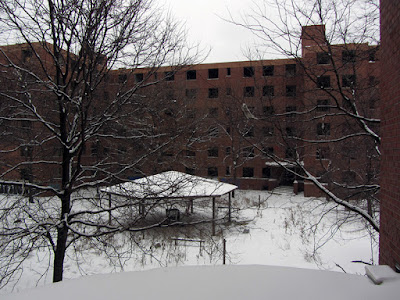 Here is another shot of the front elevation of one of the original Brewster Projects:  [Click here] 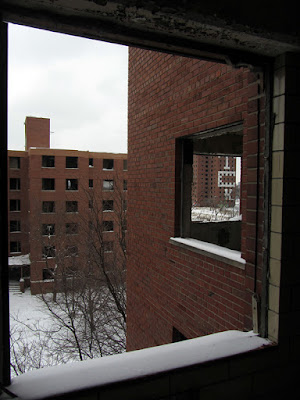 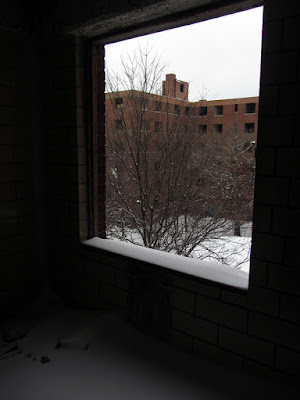 This aerial shot from the 1950s shows the Brewster-Douglass at its peak, before any of the structures were torn down:

Notice that there was once a powerhouse standing just northeast of these buildings, with twin smokestacks. I presume that it provided power and steam heat to the housing projects. 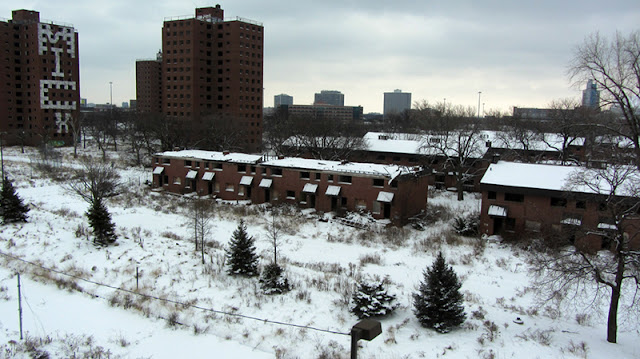 Here is a better photo of the powerplant, shot seemingly from the windows of this very building we were exploring: 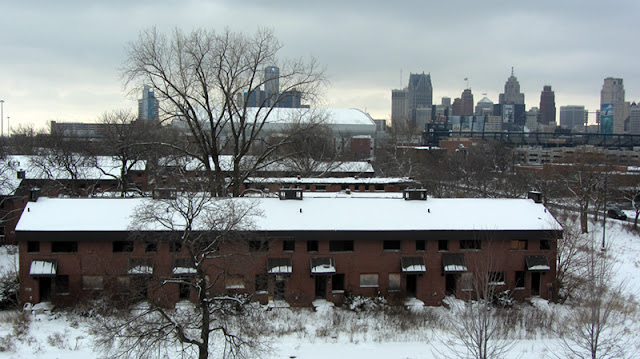 Right around the time I shot these photos of the two-story row homes, one of them went up in a huge blaze that took the entire roof off the structure. 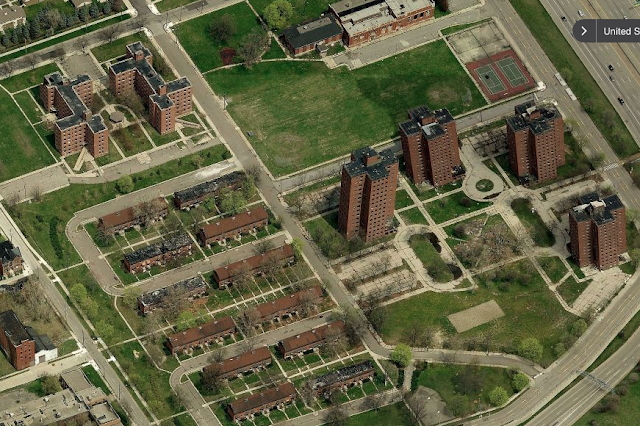 Eventually at least four of the row home buildings suffered the same fate, as you can see in the screen-capture from Bing Maps above. 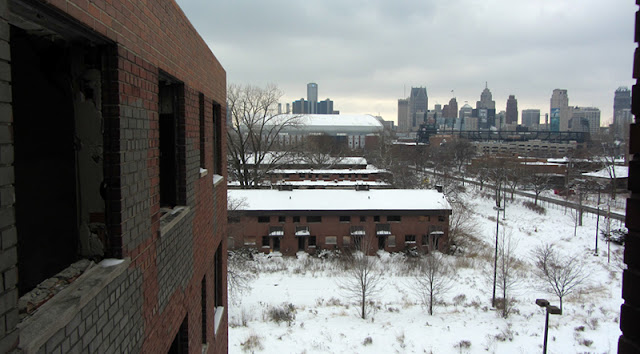 I slowly noticed something peculiar about the stairs in these buildings; each building seemed to be divided into two incommunicable sides, and yet their stairways shared the very same space between the two halves.... 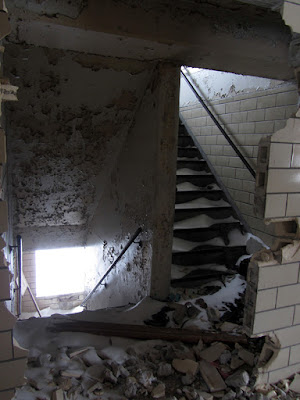 Both sets of stairs each shared a stairwell while still remaining separate, like a double-helix. I only figured this out after coming to a place where a scrapper had smashed a wall down, probably out of the same frustration as me in not being able to figure out why he couldn't get more than halfway through the building without running into a dead-end. I've never seen such a stairway before in any other building. 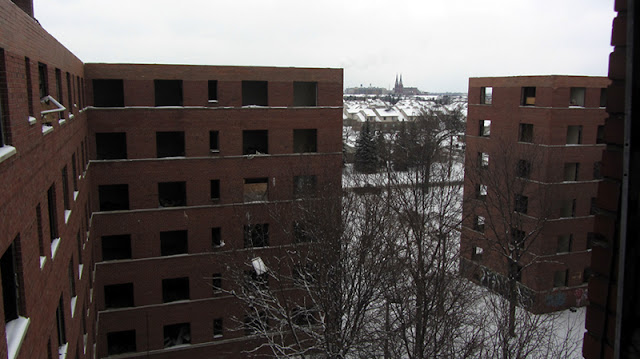 My last-ever trip to the PJs was in the summer of 2013, right after demolition had started. 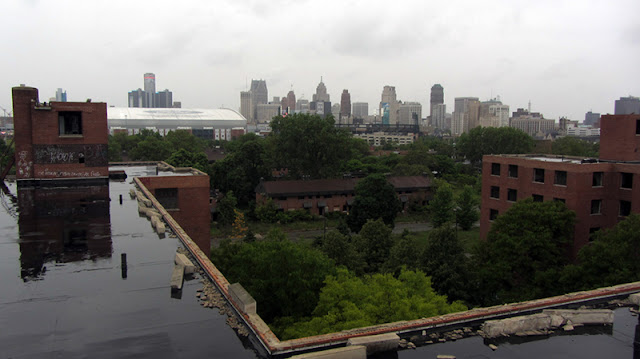 I was actually escorting a couple British colleagues of mine who had just arrived in town, whose eyes were already rather glazed over at the scale of urban desolation on their first visit to the Midwest, and the ease with which one could simply stroll at will into any abandoned skyscraper one selected. 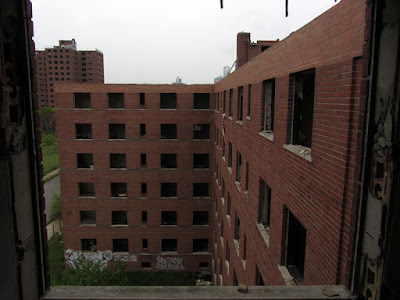 Comparisons to the desolation of Chernobyl or Pripyat come easily to the mind when looking at these photos, but it is all gone now and a prime piece of real estate in the heart of the city has been prepared for a hopefully positive reuse, despite its prickly past. 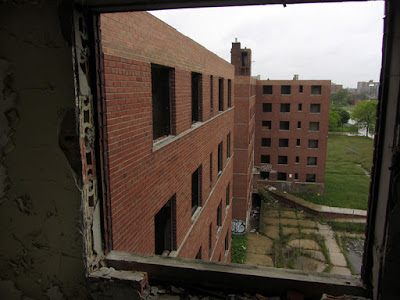 Here's hoping the Brewster-Douglass doesn't just get replaced by something else that continues to reinforce Detroit's racial and class boundaries. 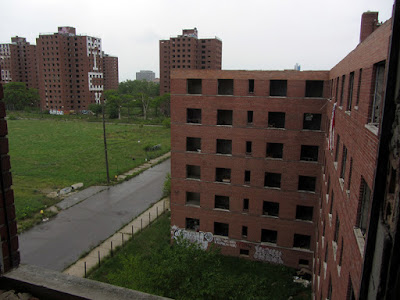