While the Brewster-Douglass Housing Projects stayed open until 2008, the Brewster-Wheeler Recreation Center was closed in 2006. The projects were all demolished in 2013 except for this one historic landmark, which the city is trying to keep around and hopefully reopen it as a recreation center and is seeking proposals for redevelopment. 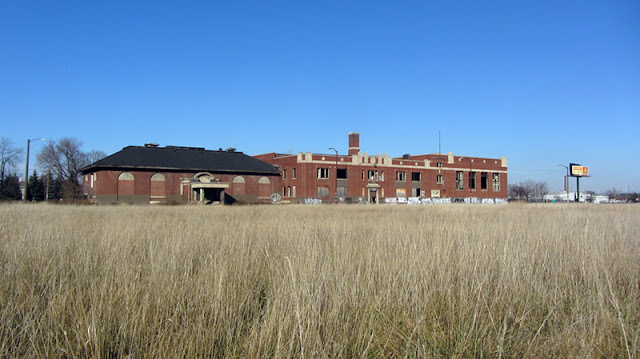 The Detroit Public Library's former Bernard Ginsburg Branch is the older-looking part of the building on the left, while the larger building on the right is the rec center containing the gymnasium and pool.

The library became part of the projects when they were built in the 1930s. This large addition was built onto the library in 1929, making it the new Brewster-Wheeler Recreation Center. It is famous for being the place where the great Joe Louis learned to box, at a gym in the basement. More on that in a minute. 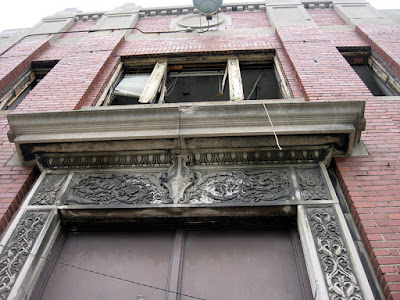 According to a historical marker that once adorned the side of the center, it was originally called just the "Wheeler Center," named after Leon "Toy" Wheeler, who became the first black employee of the Detroit Recreation Department in 1919.

In 1926 or so the city bought a building a the corner of Vernor and Hastings in Black Bottom and put Mr. Wheeler in charge of it, based on his "knowledge of sports and leadership qualities." Wheeler had been an outstanding athlete in both high school and college. When this recreation center opened in 1929 the city put Mr. Wheeler in charge of it since, I assume, the previous building at Vernor and Hastings was done away with. The plaque said that the well-rounded athletic program offered at this center made "significant progress in basketball, swimming, tennis, boxing, and other sports." It also noted that at the time the plaque was placed, there was also a pioneering program for the elderly in operation here. 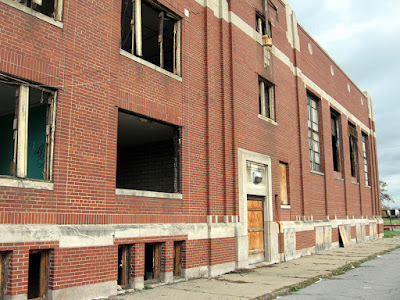 The interior had been heavily remodeled since the 1930s, and heavily neglected since well before the city finally shut it down. Here in the hallway leading to the basketball court was a mural of black role models peeling away in the darkness: 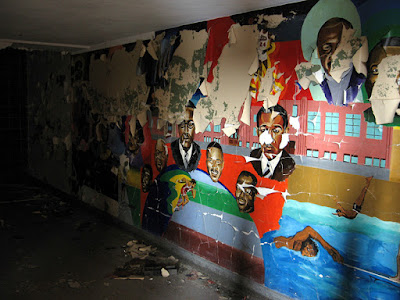 Apparently there was also an oil-painting portrait of Joe Louis hanging in the lobby of the Brewster-Wheeler Rec Center, but it has long since been moved elsewhere.

When I first visited in 2008 the building's facilities were still in good enough shape to be renovated easily, but today it has decayed quite a bit more. 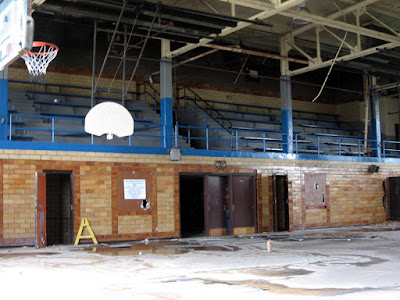 Look at these jive suckers... 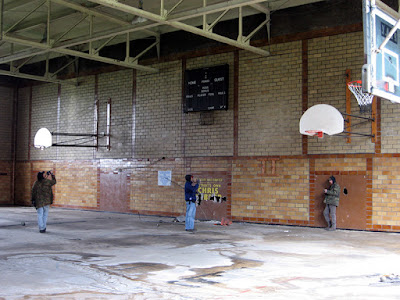 The basketball floor was ruined by an accidental flood and the court had to be closed down, so after that there was no more basketball at the rec center. 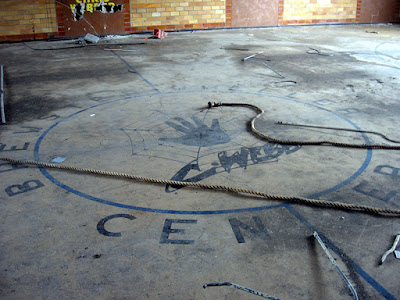 This court was in fact donated by "Detroit's own Chris Webber," according to the dedication on the wall: 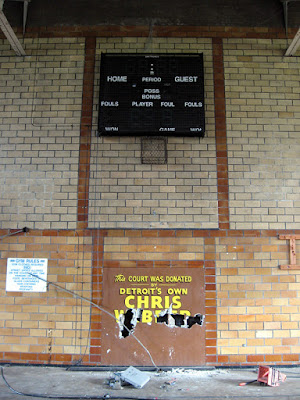 According to the book Detroit Across Three Centuries by Richard Bak, when the legendary Detroit fighter Tommy Hearns turned from boxer to promoter in the fall of 2000, he brought Mike Tyson to town for the first time. Tyson, Bak writes, treated his first heavyweight fight in Detroit almost as "a pilgrimage," and he even made a "wide-eyed visit" to the former Brewster gym where Joe Louis had gotten his start in boxing 70 years prior.

After a brief search in the dark, I too beheld the hallowed room where Joe Louis first put on the gloves... 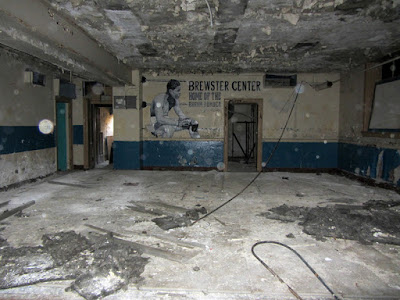 I couldn't possibly encapsulate the life and times of Joe Louis adequately in the space of this tiny post, but to give you an idea of how beloved he is in Detroit, consider that a massive sculpture of his fist placed at our most prominent intersection is one of our city's proudest symbols, and our only remaining stadium that is still named after a person and not a corporation, is named for him.

Growing up in Black Bottom, Joe Louis's mother used to give him 50 cents every week for violin lessons, but a buddy changed his mind one day and they decided to go to the Brewster Center and take boxing lessons instead. His mother was not pleased. I'm sure Max Schmeling would also have preferred Joe stuck with the violin too. 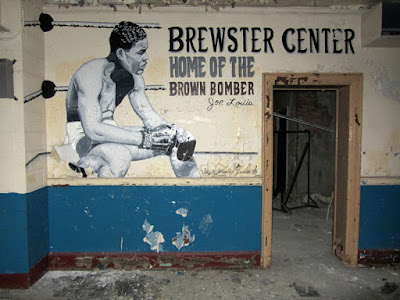 A book called Metro Detroit Boxing by Lindy Lindell discusses other boxers (besides the Brown Bomber) who fought out of this gym over the years. One of the best fighters to come out of the Brewster in the late 1970s and early 1980s was David "Machine-gun" Braxton. Known for his hefty right, Braxton made it to a World Boxing Association Junior-Middleweight Title shot in 1985 when he went against Mike McCallum of Detroit's even more famous Kronk Gym, but lost in the eighth round by TKO. Speaking of the Kronk Gym  its founder, Emanuel Steward, also received his first formal boxing lessons here at Brewster. I explored the Kronk in a different post.

Another middleweight bruiser that Lindell calls the "star" of the Brewster Center in the late 1970s was Dwight Davison. He was coming up at the same time as Tommy Hearns, but he never received the same press as Hearns did. Again, like Braxton, Davison was known for his right-handed power. Davison once TKO'd Olympic gold medalist Sugar Ray Seals at a bout in 1980, at the Pine Knob in Clarkston. 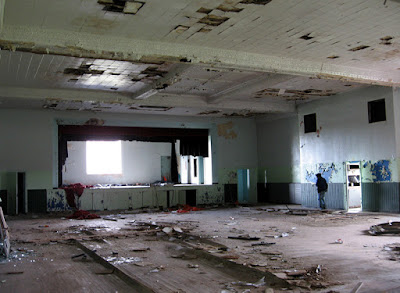 We wandered into the half of the building that used to be the Ginsburg Library, to find it apparently converted for use as an auditorium. 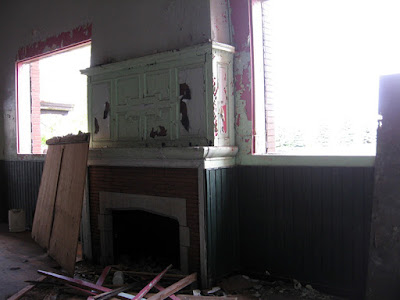 According to a post at detroityes.com quoting from a book by Frank Woodford, the Ginsburg Branch originally opened in rented space at 540 Hastings in 1913, then moved into this new, permanent structure designed by architects Mildner & Eisen at 91 Brewster Street in 1917. 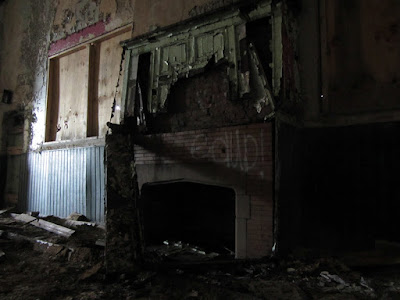 The library was named after Bernard Ginsburg, a president of the Detroit Public Library Commission in the early 20th century and was one of ten Carnegie libraries in Detroit at the time. "Because of declining patronage," this building was given to the Detroit Recreation Department in 1927 and the library branch relocated back to a rented storefront on Hastings, where it only lasted another year before closing permanently. 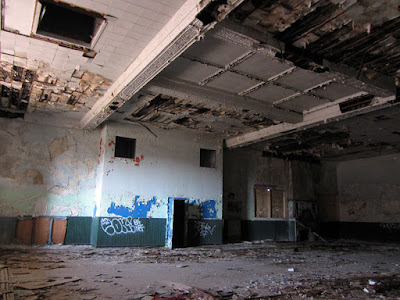 Bernard Ginsburg was also a prominent Jewish businessman and philanthropist who lived in Brush Park nearby at 236 Adelaide, and who owned some of the scrap iron yards in the immediate area, one of which I explored in another post. His Albert Kahn-designed mansion still stands. 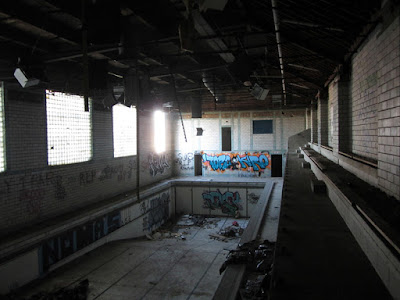 The pool was in an addition on the rear of the building, and had already started to accumulate some graffiti pieces. 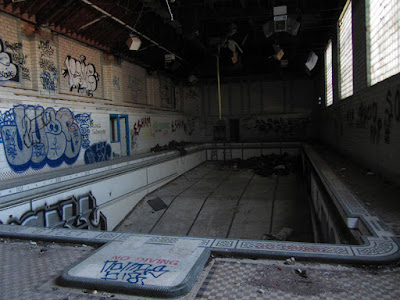 Up in the bleachers I saw evidence that the harvest of the Pewabic Tile accents around the room had begun to follow the scrap copper and iron out the door: 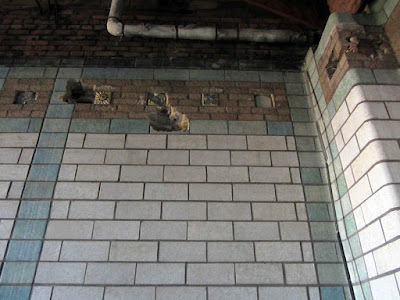 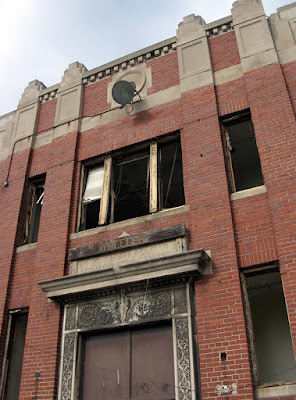 Stay tuned for the final part, where I explore the six-story buildings of the Brewster-Douglass Projects. 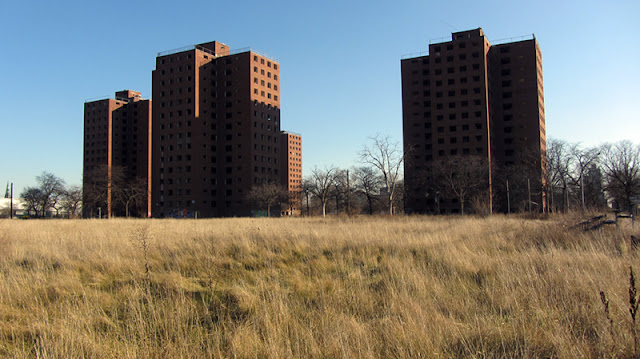