Education is the Defense of Nations 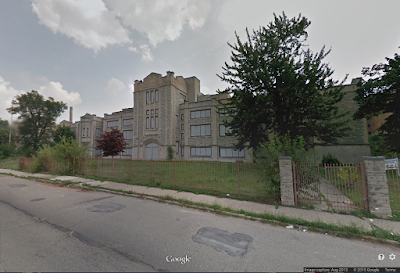 Graven upon a tablet set into the wall of the building near the main entrance are the words "Education is the defense of nations," which as far as I can tell is a paraphrase of a quote from Edmund Burke, a British statesman and philosopher:

His original quote however was "Education is the cheap defense of nations," and I am not quite sure why Highland Park chose to omit that one word from their inscription. At any rate, the meaning seems to point to the notion that an educated people are better equipped and better prepared to keep a nation afloat in the world than uneducated vassals. It also implies that youth are the main asset of any nation, and if a nation does not nurture and invest in that asset, there will be no one who is worthy enough to pass the torch to when the current generation retires from power.

And I think that Mr. Burke is also correct in asserting that it is the most cost-effective means of bolstering a nation's prowess as well. I would even go as far as to assert that we are reaping the spoiled fruits of that lean harvest in America as we speak; our current leaders are crooked and incompetent, and our upcoming generations are dull, lazy, dumb, listless, and apathetic. This is the product of neglecting our national education system for decades while we squander funds on more government, prisons, and warfare.

The vestibule and stairwell at the front entrance was pretty stunning:

Just like all of the other schools in Highland Park it was designed by Detroit architect Wells D. Butterfield, according to the book Michigan: A Guide to the Wolverine State, and is a Tudor-style structure faced with Indiana limestone. The "senior high school" section was completed in 1915 and the "junior high school" section was added in 1918. With both sections the entire school accommodated 3,700 pupils.

The junior high school section of the school also housed a junior college that offered two years of college work in literature, engineering, business administration, pre-law, pre-dental, pre-medical, and other professional courses. The approximate enrollment to that program was around 360.

The book goes on to say that Highland Park's school system also attracted students from other outside communities to attend their schools if they paid tuition. Of course taxpaying HP residents attended without additional charge, and even their school supplies were paid for and provided.

The Guide to the Wolverine State mentions that there was a psychiatry staff on hand here, who were there to help students adjust and to administer intelligence tests for classification purposes. The book also mentioned the "Unit Plan" that I talked about in my post about the Willard School, saying that it was in effect in all seven of Highland Park's gradeschools, and was "now known throughout Michigan."

As usual for a school in rapidly growing Highland Park, classes were being held before the building was officially completed, according to a Detroit Free Press article from February 1919. The building had two pools and two gymnasiums, because male and female students were originally kept separate. Its library was described as "one of the most beautiful in the state" (shown further down in this post).

The open house celebration included murals hung in the corridors on loan "from the art museum," by which they of course are probably referring to the predecessor of the DIA.

The new Highland Park Republican Club held a banquet in the auditorium that same month, attracting about 1,000 politicians from around the state, according to another Free Press article. It's been a long time since there have been any Republicans in Highland Park, that's for sure.

According to a few news articles I've turned up on the Detroit Public Library's ProQuest search engine, this auditorium was often used as a place for various community addresses and meetings during this school's later days as the Highland Park Career Academy.

These included meetings with Highland Park's emergency financial manager in 2002 regarding the absorption of Highland Park's police services by the Wayne County Sheriff, and a community meeting between residents and State Representative Bill McConico to discuss ways to curb an arson epidemic in the city in April of 2001.

The Highland Park Community College took over in 1977, following a catastrophic fire to the original gymnasium, at which time Highland Park High School was moved to the ugly modern building on Woodward Avenue where it has been for almost 40 years.

Another Free Press story says that Ford Motor Co. made a significant investment in the college in August of 2001 by turning one whole building into the "Youth & Adult Automotive Training Center," in order to help fill a gap in properly skilled repair technicians at Ford dealerships.

Highland Park School District shut down the Highland Park Career Academy program in the middle of the 2009 semester amidst controversy, and it has remained closed ever since.

This mall-like atrium connected two of the older buildings:

A 2012 MLive article said that the c.1977 high school building on Woodward was getting to the point where it was uninhabitable, and among other options the city was considering moving the high school back into its old building here on Glendale, which had only been closed down for three years by that point.

I made a trip through the basement, and saw the very impressive old boiler room, which was still stocked with all kinds of tools and things that I wished I could take home with me. This steam gauge was made in Detroit, by Otto A. Wurm & Co.:

Unfortunately I think that's the only photo I took down there. In fact, there was a lot of this place that I simply didn't bother to take photos of because I was too busy putzing around and enjoying myself.

The radio station WHPR (88.1 FM) got its start here on May 21, 1954, and was operated as a noncommercial educational radio station by Highland Park Community College until 1994 when it was transferred to R.J. Watkins Late Night Entertainment. The station still broadcasts today from a different location in the city, and can be heard online via their website.

Another superlative claimed by Highland Park High School back in its glory days was that Taylor Drysdale, a University of Michigan Big Ten swimming champion, attended this school from 1927 to 1931. It was here at Highland Park High that his talent for swimming was discovered, when he won the Detroit City High School Championship for 100-yard backstroke in his senior year, according to The Michigan Technic.

Drysdale went on to the Olympics and secured himself a place in the International Swimming Hall of Fame, having set many records in his career (including placing 4th at the 1936 Summer Games in Berlin) and went on to coach the 1956 U.S. Olympic Swimming Team. According to his obituary he was also a Colonel in the Air Force, and as a University of Michigan-trained nuclear engineer and master mathematician he became one of the Pentagon "whiz kids" who participated in the Manhattan Project. Could this perhaps be a different and ironic spin on the school's mantra, "Education is the defense of nations"?

At last I found the doorway into the school's library--curiously decorated with paintings of Egyptian hieroglyphics and scenes, in an apparent tip of the hat to ancient scholarship. This was clearly a place after my own heart, and that got me even more excited to see the splendid book-haven that surely lay within.

Libraries are my favorite place of all. Fancy old libraries with lots of anachronistic architecture score even more points with me, so finding a new one that I'd never seen before is just about the most excellent thing ever.

That said, my excitement is always tempered in these situations with the unavoidable awareness that these places are on the chopping block and not long for the world; the enjoyment is muted by my desensitization to the inexorable decay and loss that steadily gnaws away at our cultural heritage, and the knowledge that all this shit is going to end up in a landfill by either the scourge of water or of stupid men, or both.

No Tudor-style library is complete without the stone hearth...

A close-up of the inscription:

I have a feeling that this room was not always painted hospital white, and that it was originally trimmed in much dark stained wood.

Happily, this place might be saved after all. Galapagos Art Space of Brooklyn, New York bought this building in 2014 for a whopping $49,000--a sum of money that wouldn't buy you a hot dog in Brooklyn today (I've checked).

Galapagos' move to the heart of Detroit was prompted by the over-gentrification of Brooklyn, even though they were essentially the ones that arguably spurred that exact economic growth when they moved there and made the once-grimy borough "cool" to live in.

So then can we expect Highland Park to become the next "happening," fashionable place that everyone wants to live in? Seems like an awful stretch...Ford Motor Co. jobs and the prosperity that came with them was the only reason anyone ever really moved here in the first place--and that was exactly 100 years ago.

Well, at least Galapagos got a good deal on a great building, which will hopefully be opened back up for the public to admire it at some point soon.

The building seen across the alley on the right was the aforementioned automotive workshop:

Unfortunately we didn't take more than a glimpse inside it since we didn't even get to see all of the main building during our stay, which I deemed more important, but from that glimpse I saw several cars, and lots and lots of equipment and lootables. I promised to return, but alas, that opportunity never came.

On the roof, there was a very interesting skylight over the aforementioned modern atrium between buildings:

The New Center and downtown Detroit skylines blending together:

Downtown Highland Park and the Model-T Plant are seen on the horizon in the other direction:

Highland Park High School was really a huge place, and I didn't have adequate time in my one visit there to see it all...

The reason I never went back is because a couple of my friends who came with me that day ended up getting assaulted by Highland Park police officers after they left the building--I was lucky enough to have gone out a different way. No tickets, no arrests, just good ole-fashioned police brutality and intimidation, just for the fun of it...because that's how the cops do in HP. Needless to say we avoided that part of town for awhile.