The more things change, the more they stay the same. It seems like just yesterday that I was in gradeschool and Reagan was in office, and my biggest fear was a nuclear war with Russia. Well, here I am 30 years later, and we appear to be back to where we started. George Orwell, something something.


Anyway, our country's state of constant war leaves behind quite a few relics and ruins as you might well imagine. It's one thing to hear about nuclear war on the tele-screen when the talking heads are droning on, but it's completely another to actually go inside a nuclear arsenal and see the infrastructure that facilitates our nation's ability to destroy the very planet it sits on.

So when I learned that there was an apparently unattended ammunition depot at Kincheloe Air Force Base in the eastern Upper Peninsula I made a side-trip to check it out. I have explored an actual Titan II nuclear missile silo / underground base in Colorado, but this was the first time that I'd be checking out an abandoned Cold War nuclear site in Michigan. There is also the Newport Nike Missile Base down in Monroe County but that place did not have nuclear capability.

Mind you, I had to scale about 20 electrified razorwire fences and crawl through a minefield in order to get these photos, so I hope you appreciate them. 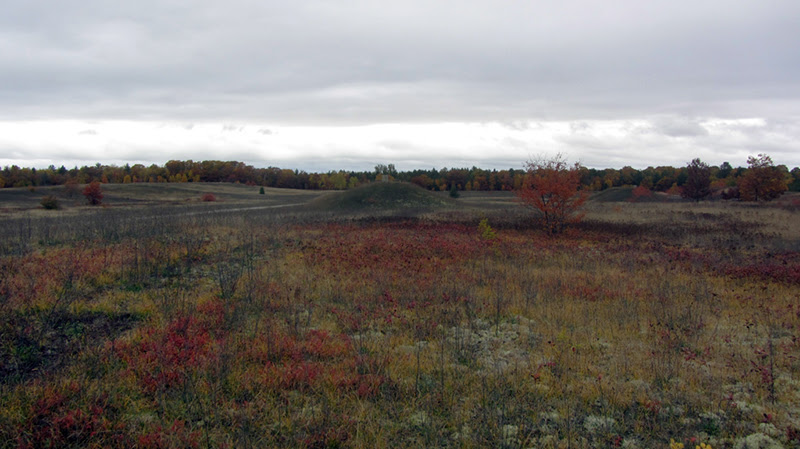 Kinross Auxiliary Air Field came about in June 1941, right before America was dragged into World War II (or while it was waiting for the invitation to the party, depending on your view of history). According to a lengthy writeup of its history at strategic-air-command.com, Kinross served as a refueling base for aircraft heading to Alaska during the war, and as an air base for defense of the critical Soo Locks.

The Soo Locks are one of the most important logistical points in the Great Lakes, and without them it would not have been possible for America to effectively operate its war machine. If the locks were bombed, ships carrying Upper Peninsula iron and copper ore to the mills of the lower lakes would be unable to sail from Lake Superior. Kinross was operated under the 4250th Army Air Force Base Unit until April 24, 1945. 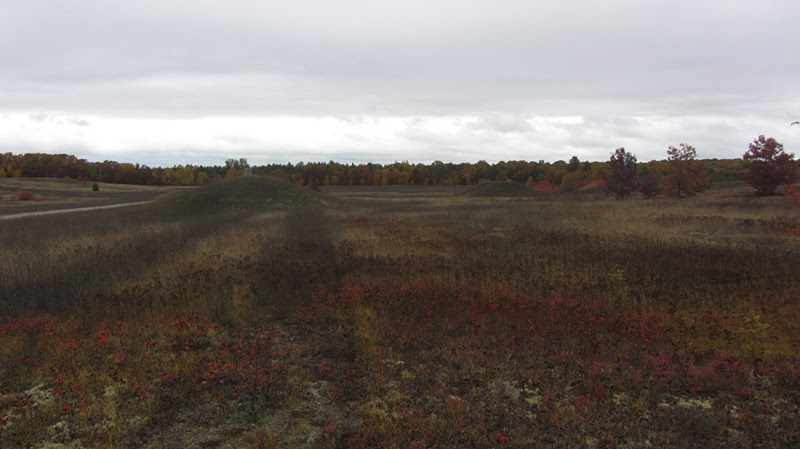 The airfield was used by the City of Sault Ste. Marie as a civilian airport until the Korean War began a mere five years later, in 1950. Army troops returned to the Soo, and a series of different fighter-interceptor squadrons were stationed here. According to strategic-air-command.com this base's name was changed to Oscodo Air Force Base at that time, and renamed Kinross Air Force Base (AFB) by 1955. Some of the jets that were stationed at Kinross were Northrop F-89H Scorpions, and Lockheed F-94B Starfires. 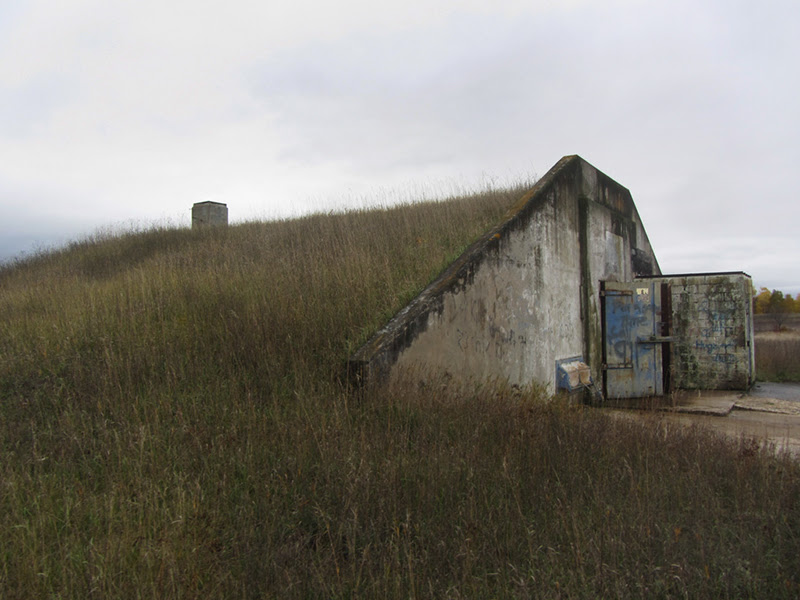 During 1958 the Air Force decided that it wanted to be able to keep larger aircraft such as nuclear bombers at Kinross, so they sent the 438th Fighter Squadron to live at K.I. Sawyer AFB near Marquette while reconstructing the runways.

These bunkers are your typical ordnance magazines found at any Air Force base, and were used for storing missiles and bombs while simultaneously designed to blend into the landscape when viewed from above. The reason being of course to make it harder for enemy bombers to see their targets. In 1959 Kinross AFB was once again renamed Kincheloe AFB, in honor of Capt. Ivan C. Kincheloe Jr., a native of Cassopolis, Michigan. Kincheloe was the first pilot to ever climb above 100,000 feet, in the Bell X-2 rocket-powered research airplane. He was awarded the Mackay Trophy for this in 1956 and dubbed "America's No. 1 Spaceman." Ahh, the 1950s. Kincheloe was killed two years later however, when he crashed an F-104. 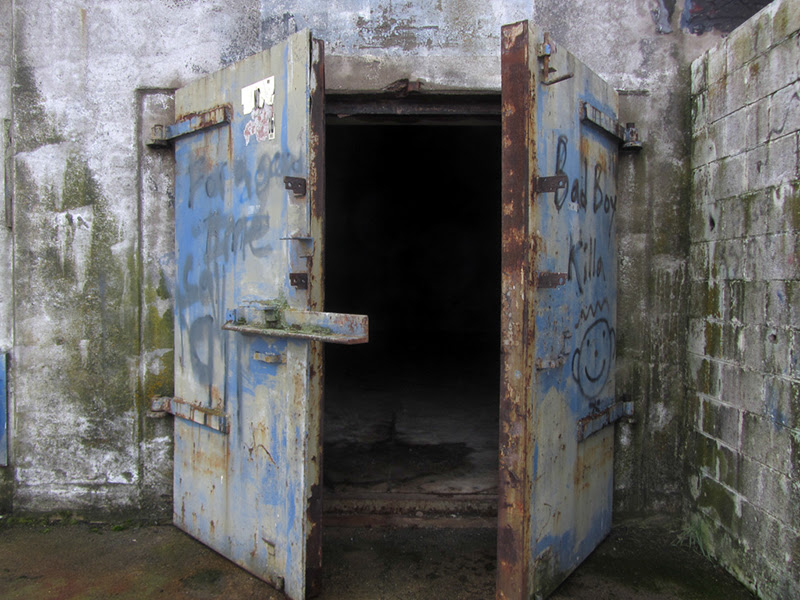 In 1962 the 4239th Strategic Wing of the Strategic Air Command at Kincheloe went operational, and was designated the 449th Bomb Wing. The fifteen B-52H bombers of the 449th shared the base with the 507th Fighter Wing. The next year the 908th Air Refueling Squadron was added, with ten KC-135 tankers. Kincheloe AFB was considered a primary nuclear target in the event of a nuclear war. I'm guessing that Kincheloe, like K.I. Sawyer AFB, was positioned so as to launch a nuclear counterstrike on Russia by sending B-52s across the North Pole. 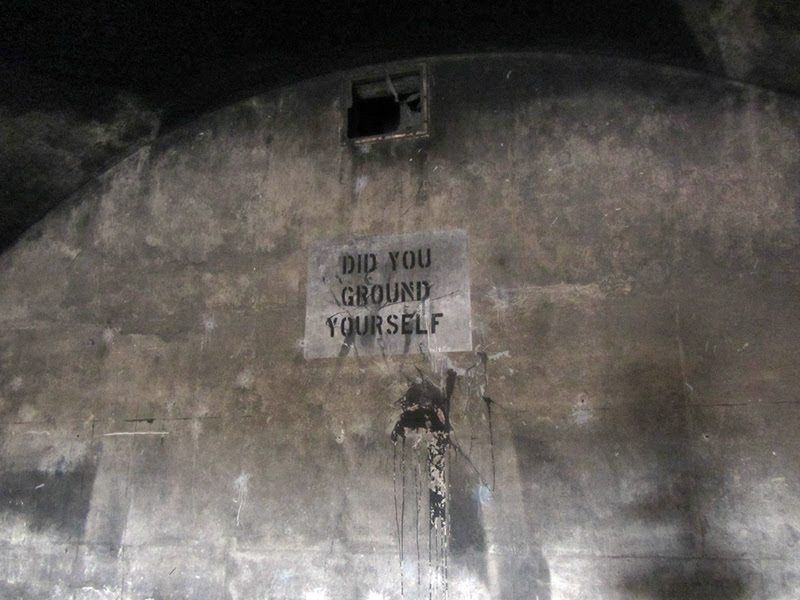 The sign reading "DID YOU GROUND YOURSELF" implores the technician to make sure he has taken the proper precautions for working near ordnance. In order to avoid unwanted static electric discharge that might lead to an explosion, anyone entering the magazine must make sure they have grounded themselves to get rid of any static charge built up in their bodies. 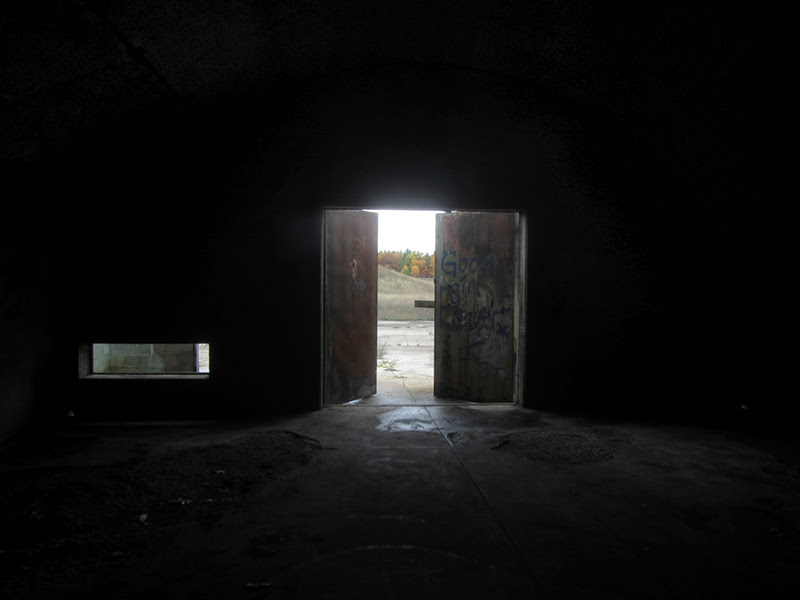 According to the book The United States Air Force: A Chronology, by John C. Fredriksen, Kincheloe was also where the BOMARC-B missile system debuted, in June of 1961. Boeing's corporate website says that the supersonic BOMARC was the world’s first long-range anti-aircraft missile system, and the first ones that Boeing mass-produced. Boeing also designed and built the launch facilities. BOMARC is militarese for Boeing / Michigan Aeronautical Research Center. The system was developed as a countermeasure to the Soviet Union’s nuclear capability starting in 1949.

The object of atomic warfare is to be the last country killed off by the horrific effects of radiation fallout and nuclear winter, and to have the most billionaires and plutocrats locked away safely somewhere deep inside a mountain with a bevy of handpicked virgins by which to repopulate the shattered planet in their own pale, flabby image. The country with the most of these conditions met, and the most precious bodily fluids intact, wins. 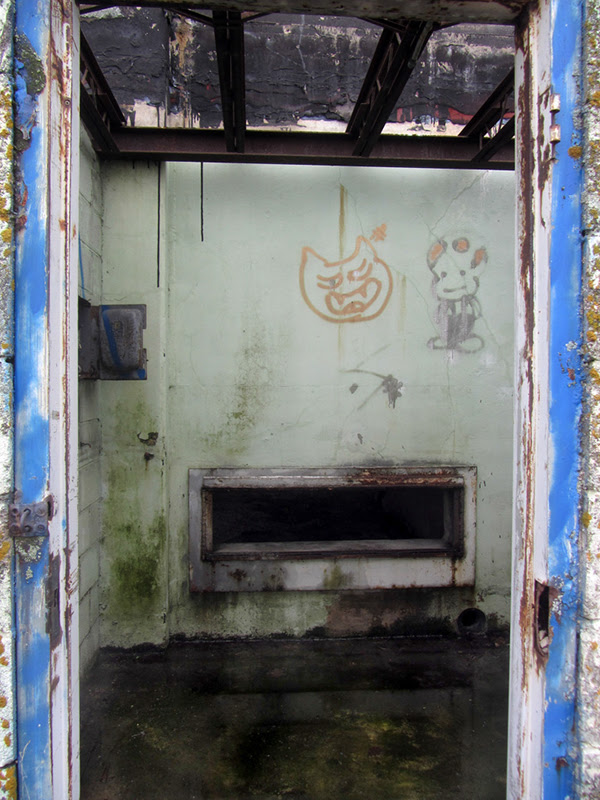 In 1965 the Department of Defense announced that it wanted to phase-out Kincheloe AFB by the end of 1971, even though they had just spent $30 million of our money on enlarging the runways here to accommodate bombers just a couple years earlier. The base's population was about 10,000 people by 1970, and this number comprised about 27% of Chippewa County's population.

Also in 1970, Congress declared that a continental air defense missile system was no longer needed, and the BOMARC missiles were retired from service in 1972. So if you were counting, the BOMARC took 12 years to design and implement, and 11 years later it was all scrapped. Sounds like a good use of tax money to me! I'm sure Boeing would agree. 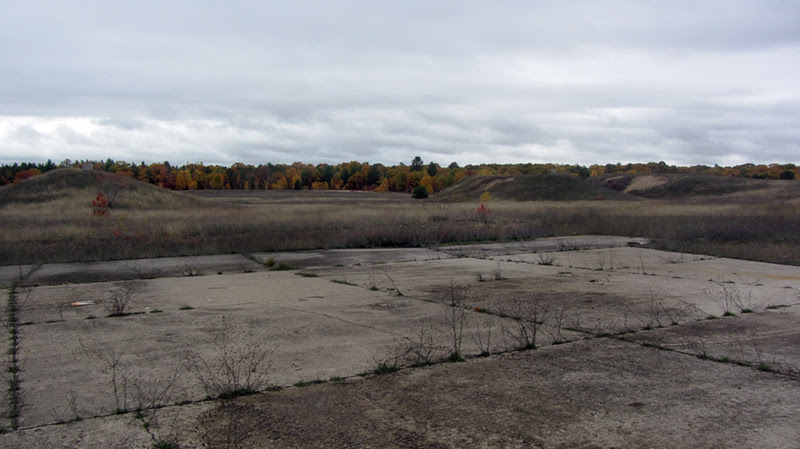 I didn't really figure out what this was, but it looks to be an automatically closing counterweighted blast shield of some sort, perhaps it was just a vent: 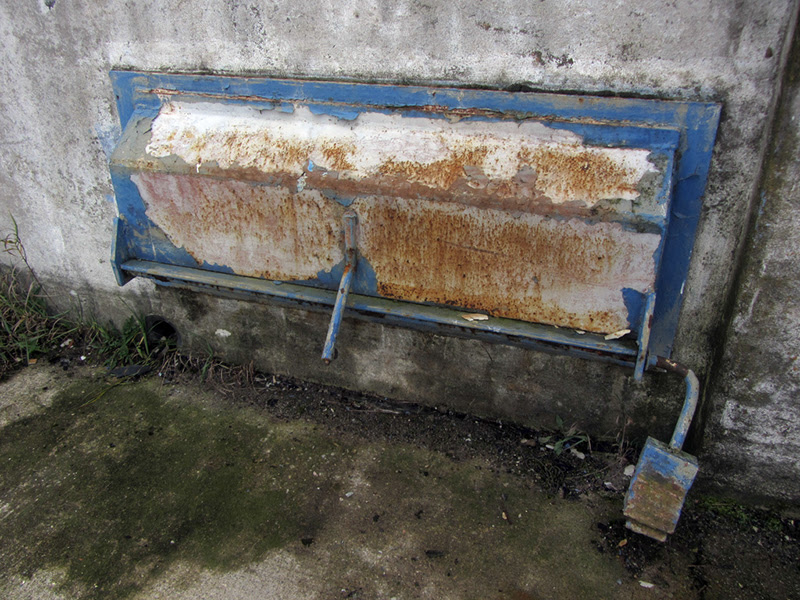 In the spring of 1971, the Air Force decided to keep Kincheloe open for a bit longer, and the 449th Bombardment Wing assumed command. The base was finally deactivated on September 30, 1977. The surplus 7,265-acre base has found other uses over the years...big surprise--several of the uses were prisons. Four prisons and a work camp, to be specific. One of them, Hiawatha Correctional, has been shut down since 2009, but will be reopening in 2015 while the Kinross Correctional Facility (housed in a former barracks) will in turn close down. 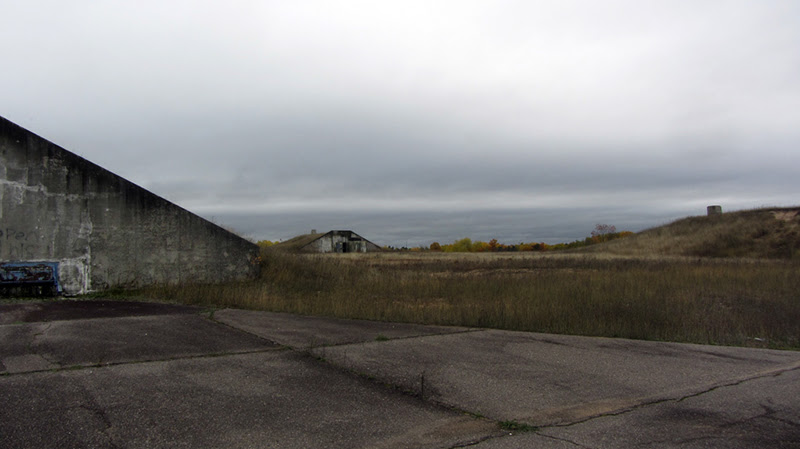 There have also been industrial companies and retail businesses using space at the former base. The local tax base had reportedly doubled, and the civilian payroll was somewhere in the neighborhood of $110 million. During the winter months, General Motors allegedly leases a portion of the airport as a test track for cars. According to imdb.com, the airport scenes from the movie Die Hard 2 were also filmed here, and in Alpena. To be fair, I was only seeing a very small portion of this large site--the airport itself was about a mile south of here.

Someone painted "For a good time call 911" on the blast doors: 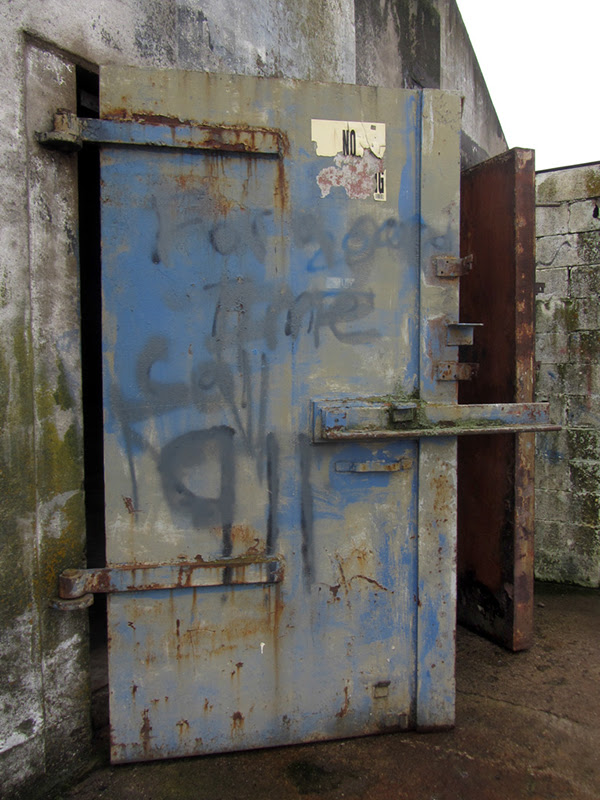 We've got UFOs and aliens painted on this one: 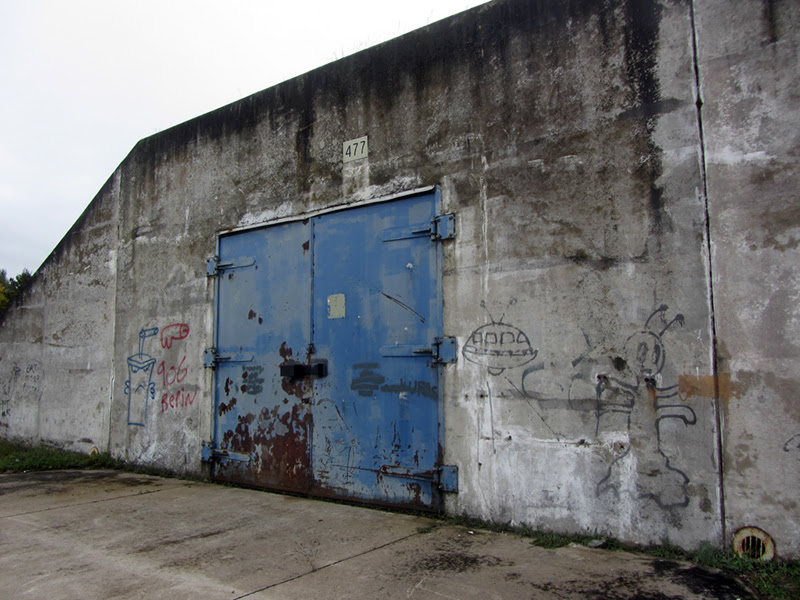 There was a lot of evidence of local yokel activity here, as 4-wheeler tracks were evident in the sand, as well as a lot of paintball splats, and spent cartridge cases from slightly more powerful weapons. 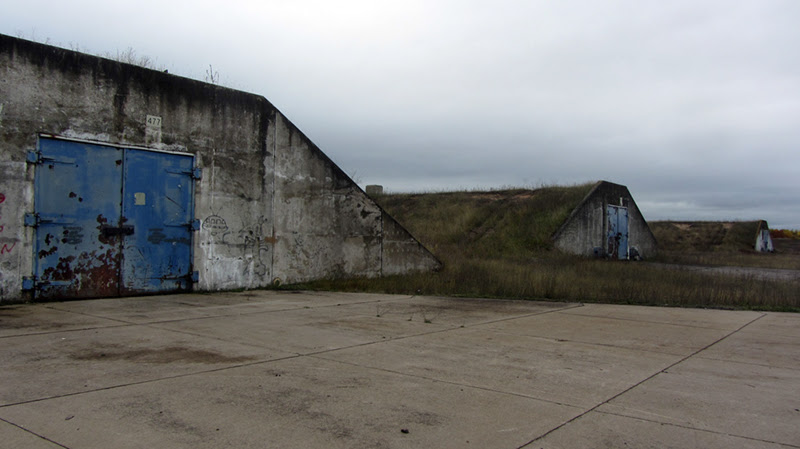 I think you could have some developer come along and turn these former ordnance lockers into a prestigious condominium...you could even call it "The Cottages at Nuclear Cove," or "The Bunkers at Paranoia Way," or some other idiotically tacky slogan. Couldn't you see it? Ward Cleaver out front manicuring the pristine lawn, Betty Crocker in the concrete kitchen fixing up a batch of Freedom Fries, Tanner and Jaiyden playing cowboys & jihadis with the neighbor boys.... It could be the ultimate salute to the absurdity of American life. 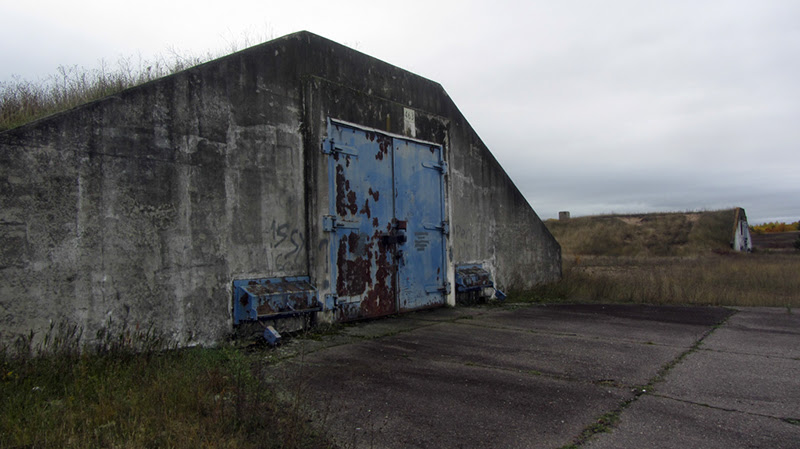 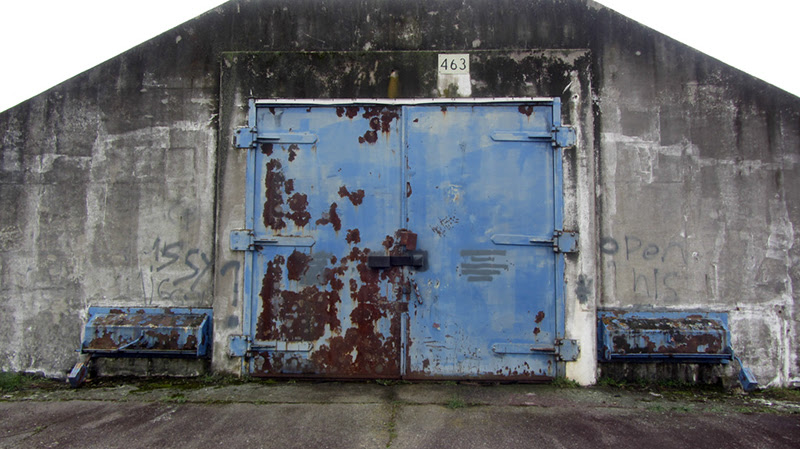 Just think, if you lived here, you'd be home by now... 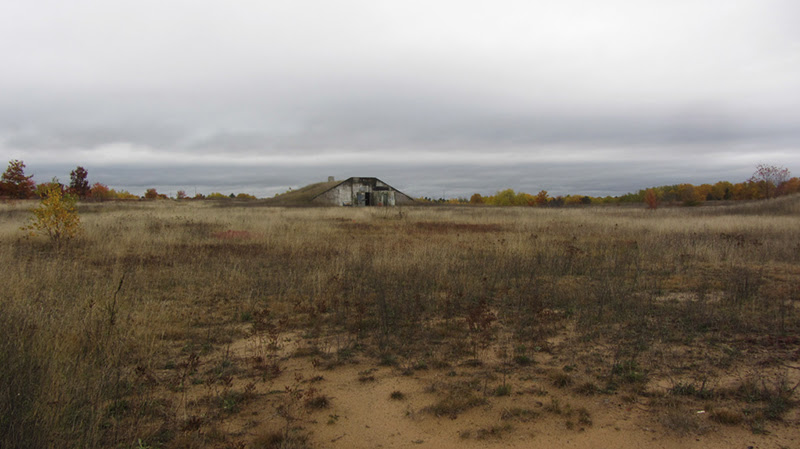