Henry Ford Did Not Work Here

The Detroit Dry Dock Engine Works (aka, Detroit Shipbuilding Co.)  was a complex of interconnected buildings that sat abandoned at the terminus of the Dequindre Cut for many years, and just recently underwent an extensive "renovation" by the Michigan DNR. I say "renovation," because they demolished most of it before slapping some silly decor and an even sillier name on the remnants: "Outdoor Adventure & Discovery Center." 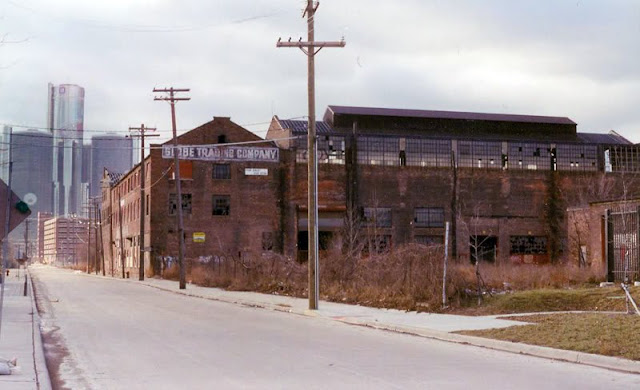 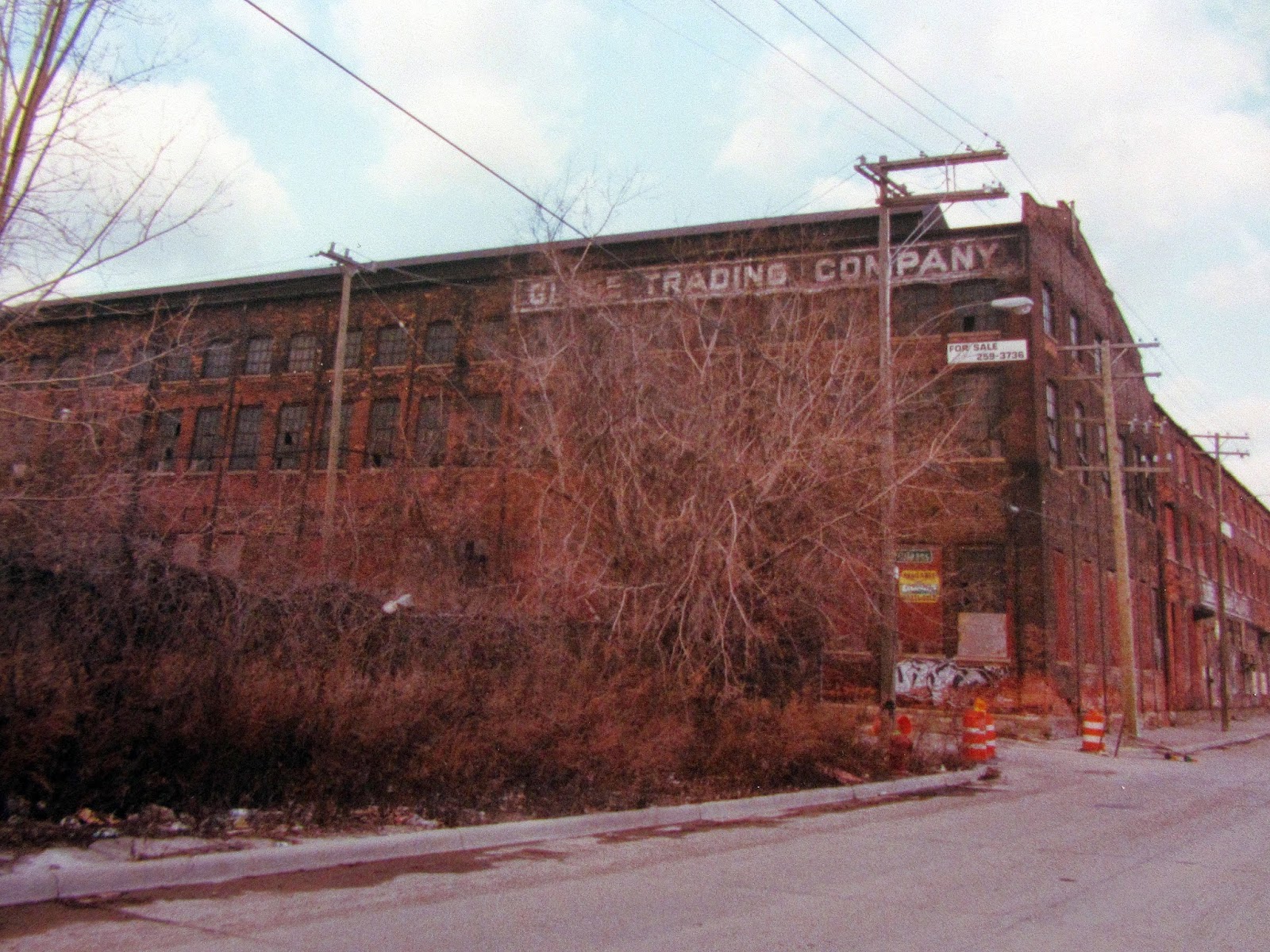 Klug says that the Engine Works is significant because of its role in "manufacturing and repairing marine steam engines and boilers for Great Lakes freighters and passenger vessels from 1867 until the mid-1920s." It was also significant as a showcase of the evolution of American factory construction methods of the period, as Klug explains:


The six extant buildings that make up the Dry Dock Engine Works complex were erected between 1892 and 1919. The first of these, a machine shop, was designed and built by the Berlin Iron Bridge Company of East Berlin, Connecticut, and is an early example of an industrial structure entirely supported by a steel frame with brick curtain walls. The remaining five buildings (a foundry, an industrial loft building, an addition to the machine shop, a chipping room, and a shipping and receiving space) were built between 1902 and 1919 and show the evolution of steel-frame construction as riveted connections became welded, solid webs gave way to lattice webs, and builders began to use reinforced concrete.

I have italicized the most important part--essentially, this factory was one of the archetypes of the modern industrial building. The old brick-&-timber mills of the 1800s, and even the "Kahn-crete" factories of the 1900s have given way to this style of construction--a spacious, steel-framed, thin-walled structure. 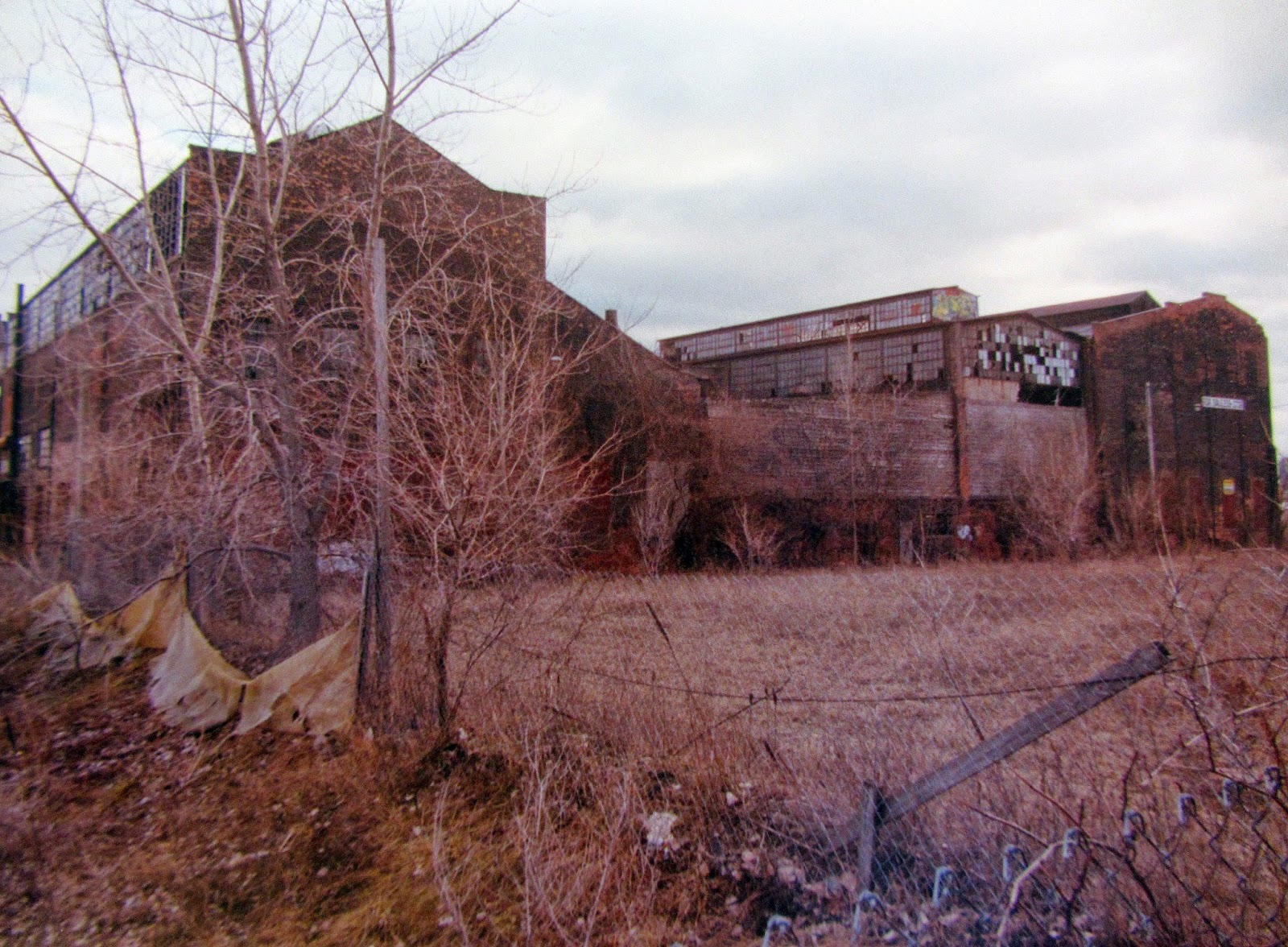 One oft-repeated myth, or lazy "half-truth," that seems to get a fair amount of play is that Henry Ford worked in this building, and that it was here that he learned the skills to design his first motor car.

Close, but not exactly. 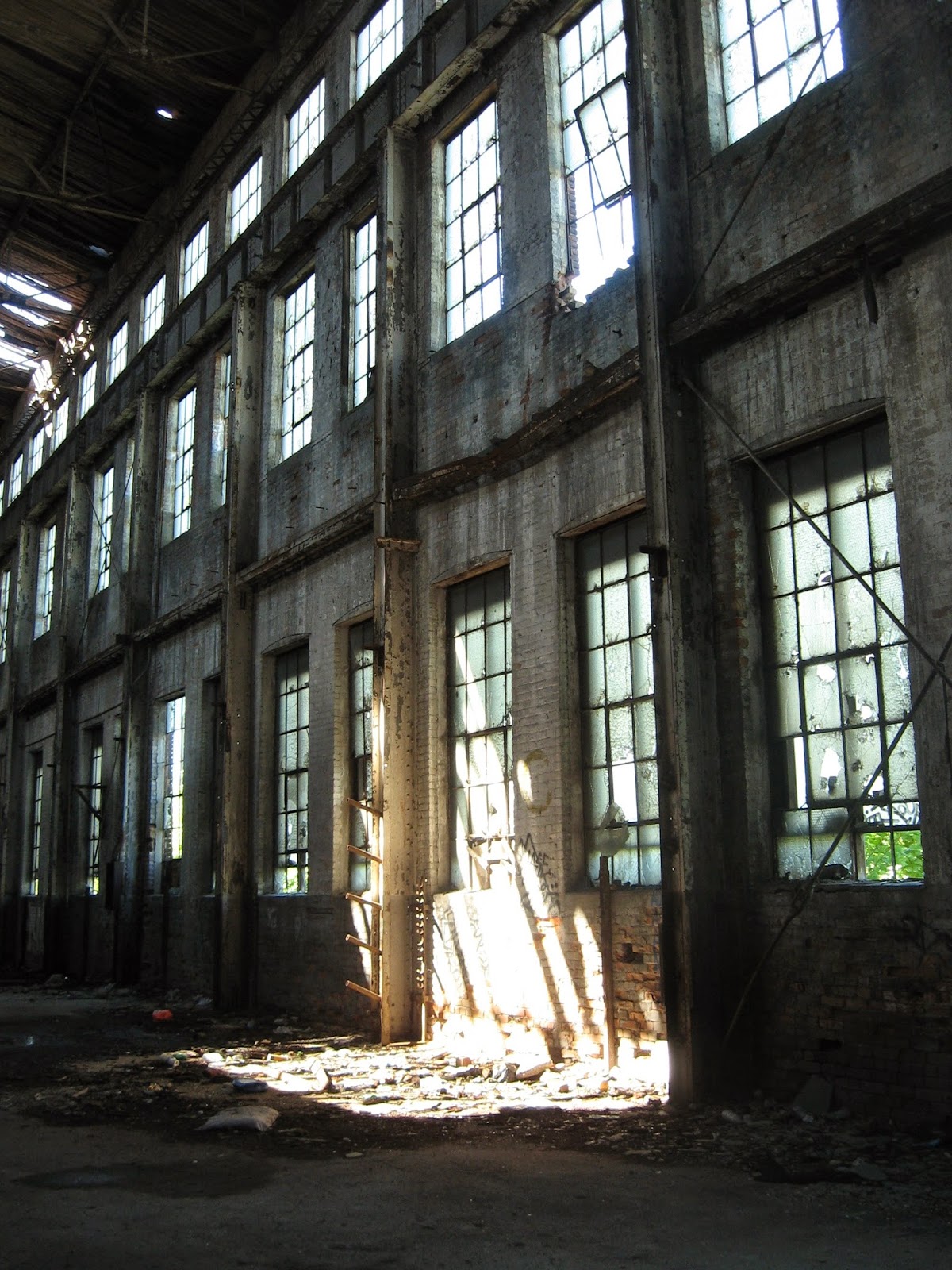 According to both Thomas Klug, and the book American Odyssey by Robert Conot, Henry Ford worked here from 1880 to 1882. If you consider that this part of the complex was only constructed as of 1892 and onward, then Henry Ford could not have worked in any part of this complex that is standing today, nor the sections that were recently demolished during renovation. 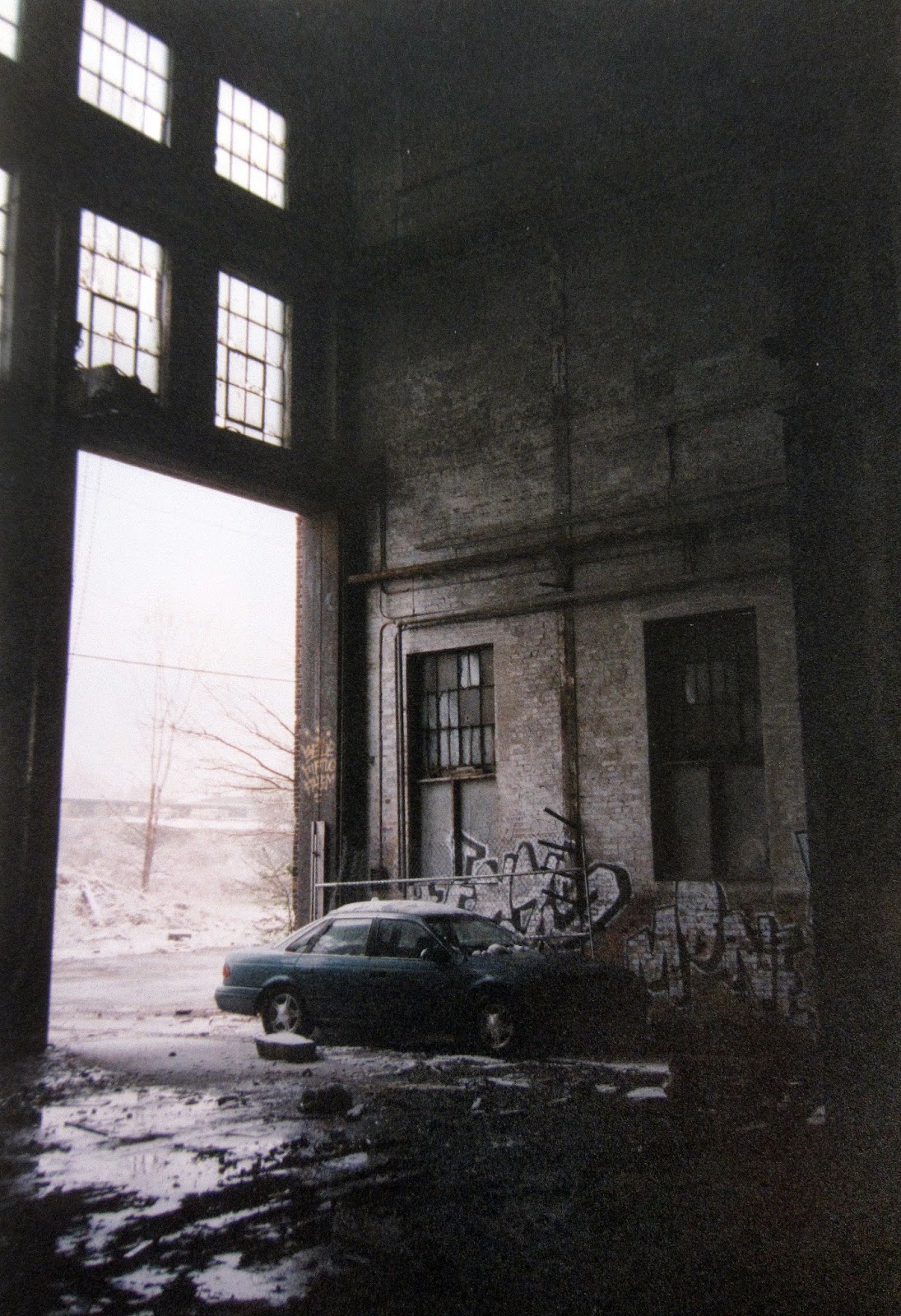 Henry Ford did work in a nearby section of the Detroit Shipbuilding Co. long ago demolished, and his experience there with steam engines grew into an interest in building a steam-powered "tractor" to help farmers with the grueling labor of plowing, and by natural extension as a means to replace the horse entirely as a means of conveyance.

It was at this company that Henry Ford came into hands-on contact with internal combustion engines, and earned enough experience to be hired by Westinghouse, where he set up and serviced steam engines for farmers in southeastern Michigan. 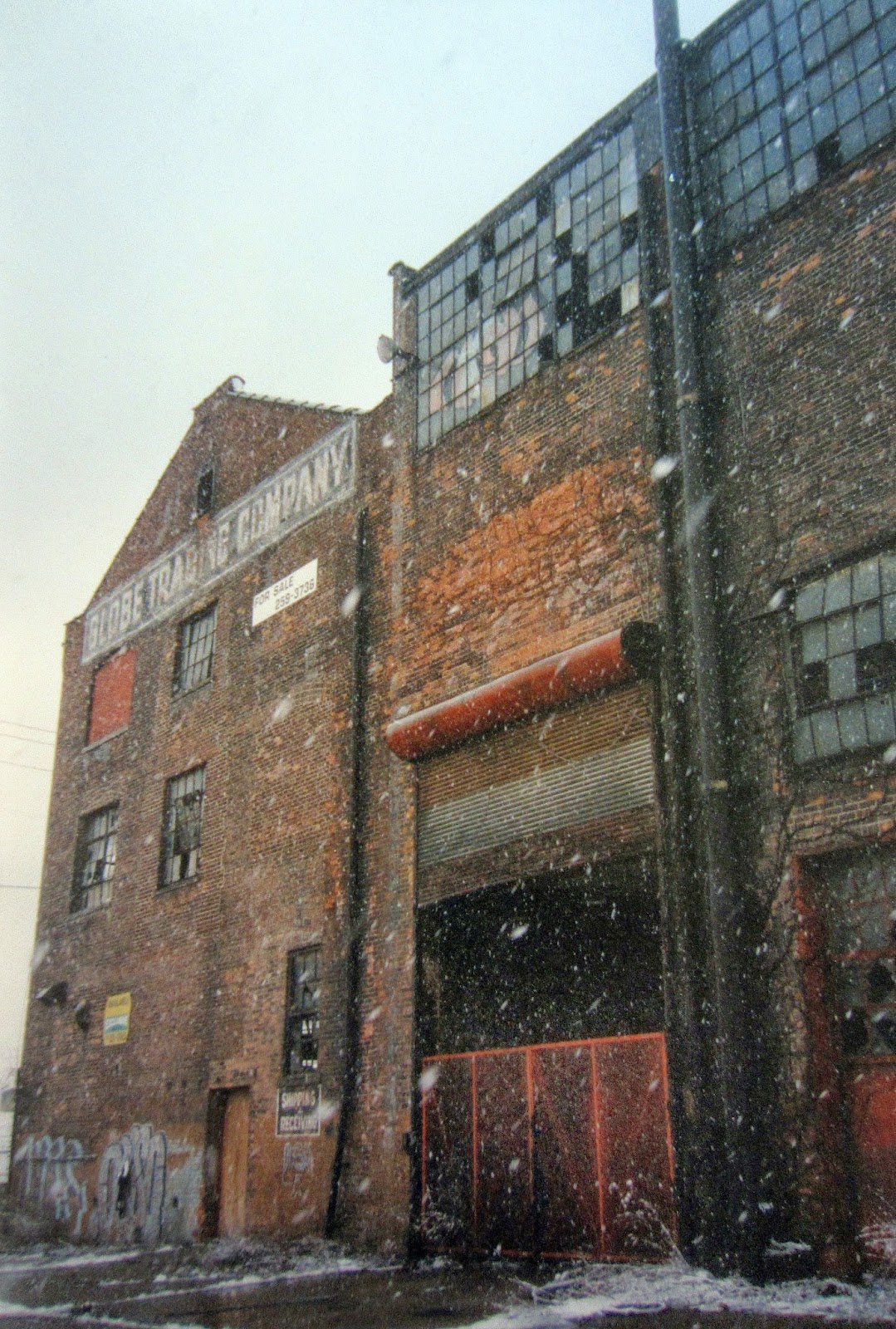 Interestingly, Conot asserts that Detroit was a leading shipbuilding center in the 1800s because due to a lack of locally available fuel-grade coal in Michigan, Detroit was lead to focus on perfecting internal combustion technology. 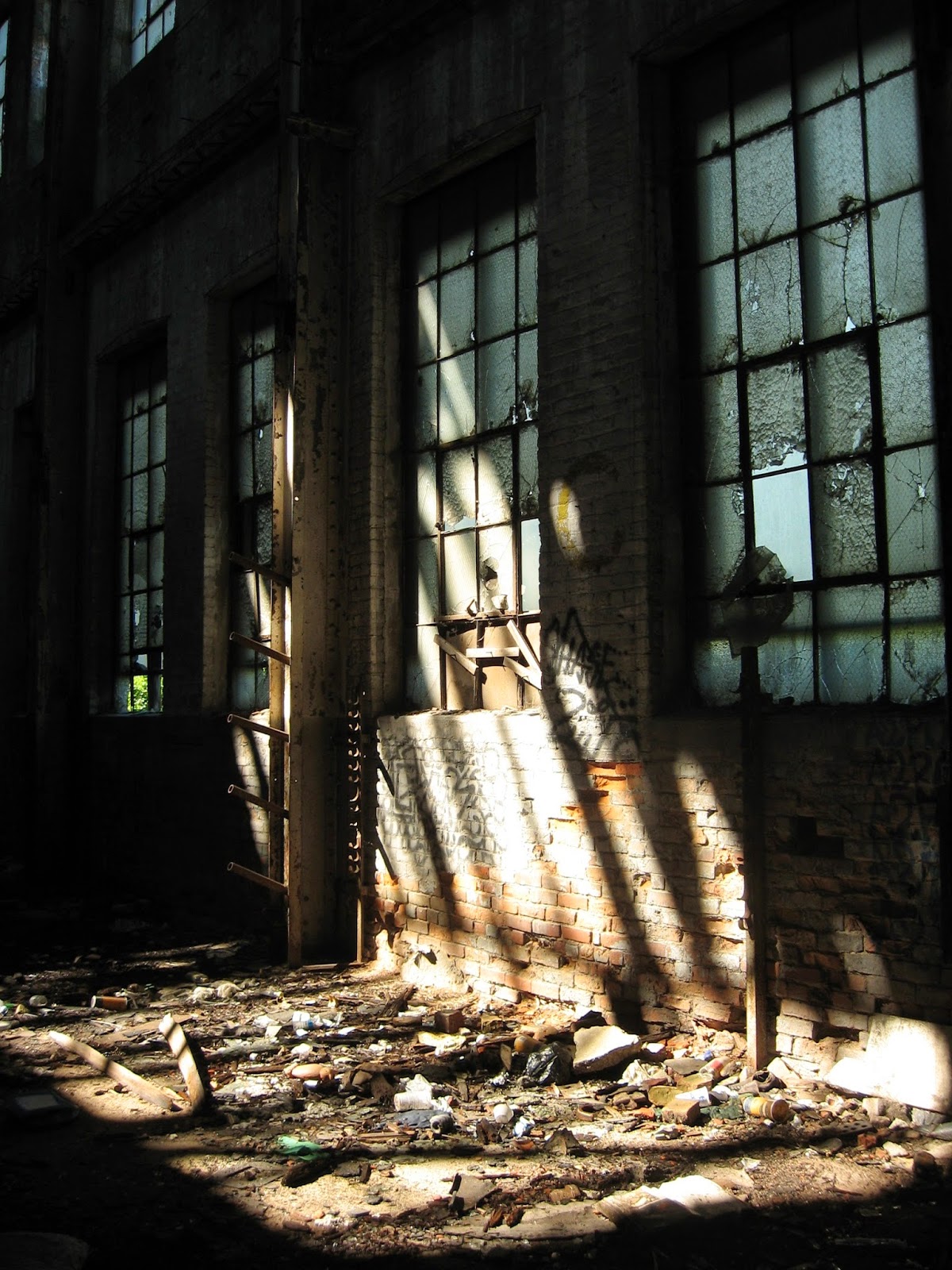 "From daybreak to dusk," he writes, "the clangorous sounds of shipbuilding penetrated into the city. From mansions along Jefferson Avenue nurses brought their charges to look at the hulls taking shape or being repaired in the drydocks." Up to eight ships per year were launched, and numerous others were refitted by the company. 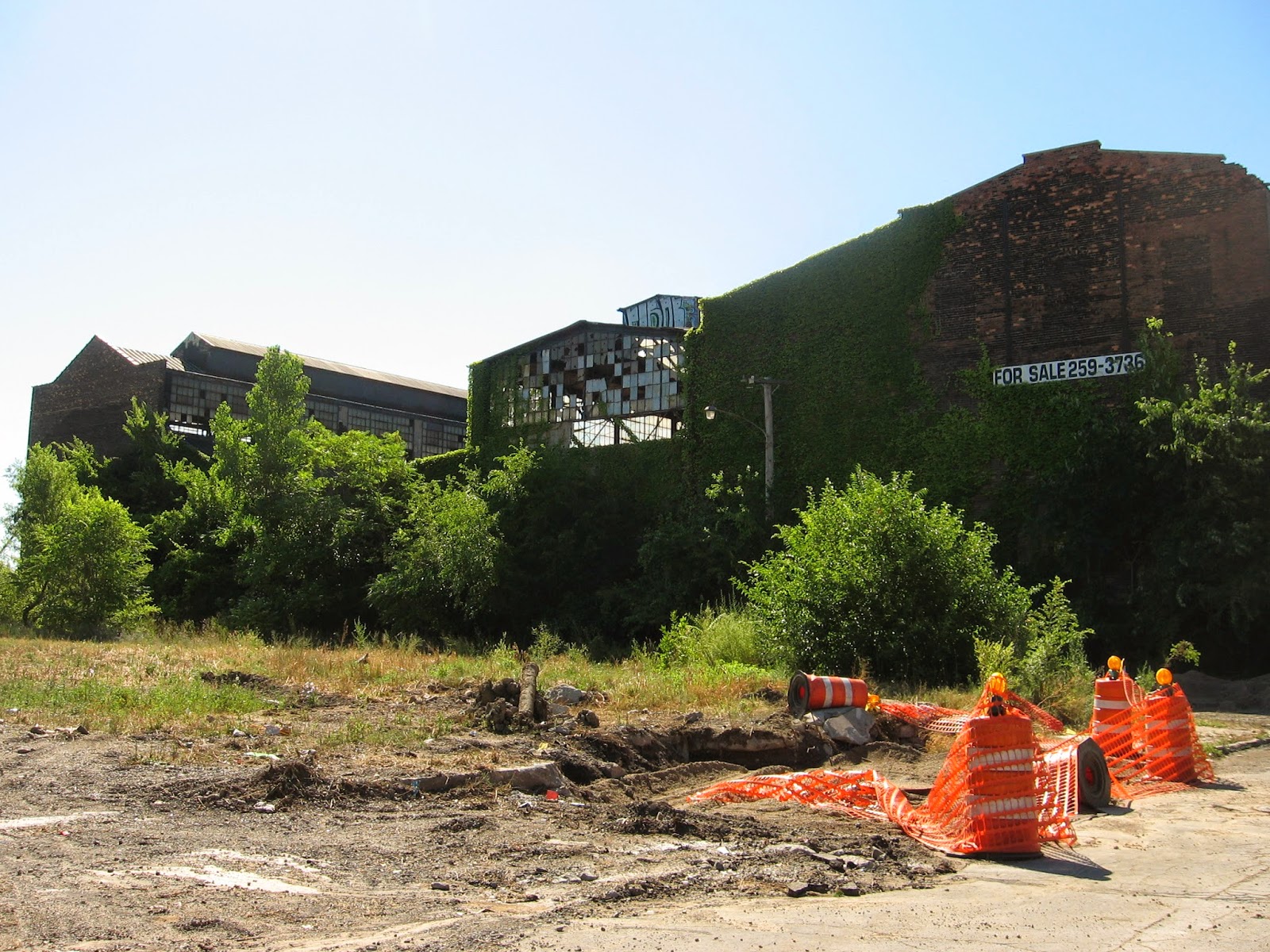 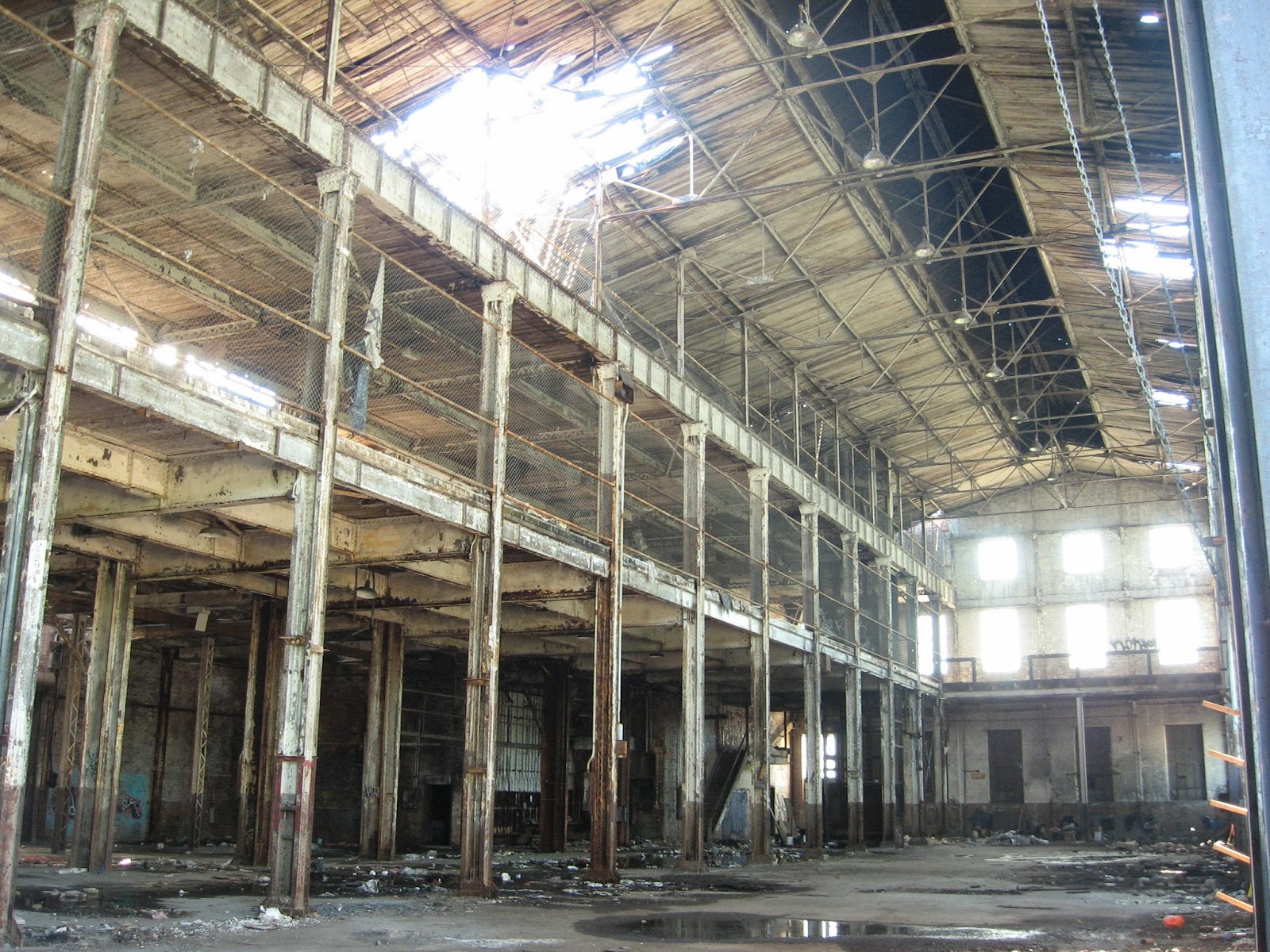 Substreet.org cites a source that says the company even built a unique 75-ton submarine here in 1895. He goes on to say that during WWI, the Wyandotte branch of Detroit Shipbuilding Co. "constructed almost 100 ships, many of which were outfitted with steam engines from the Detroit shop," and by 1905, "half of all the ships built for the Great Lakes (by tonnage) were built in Detroit." 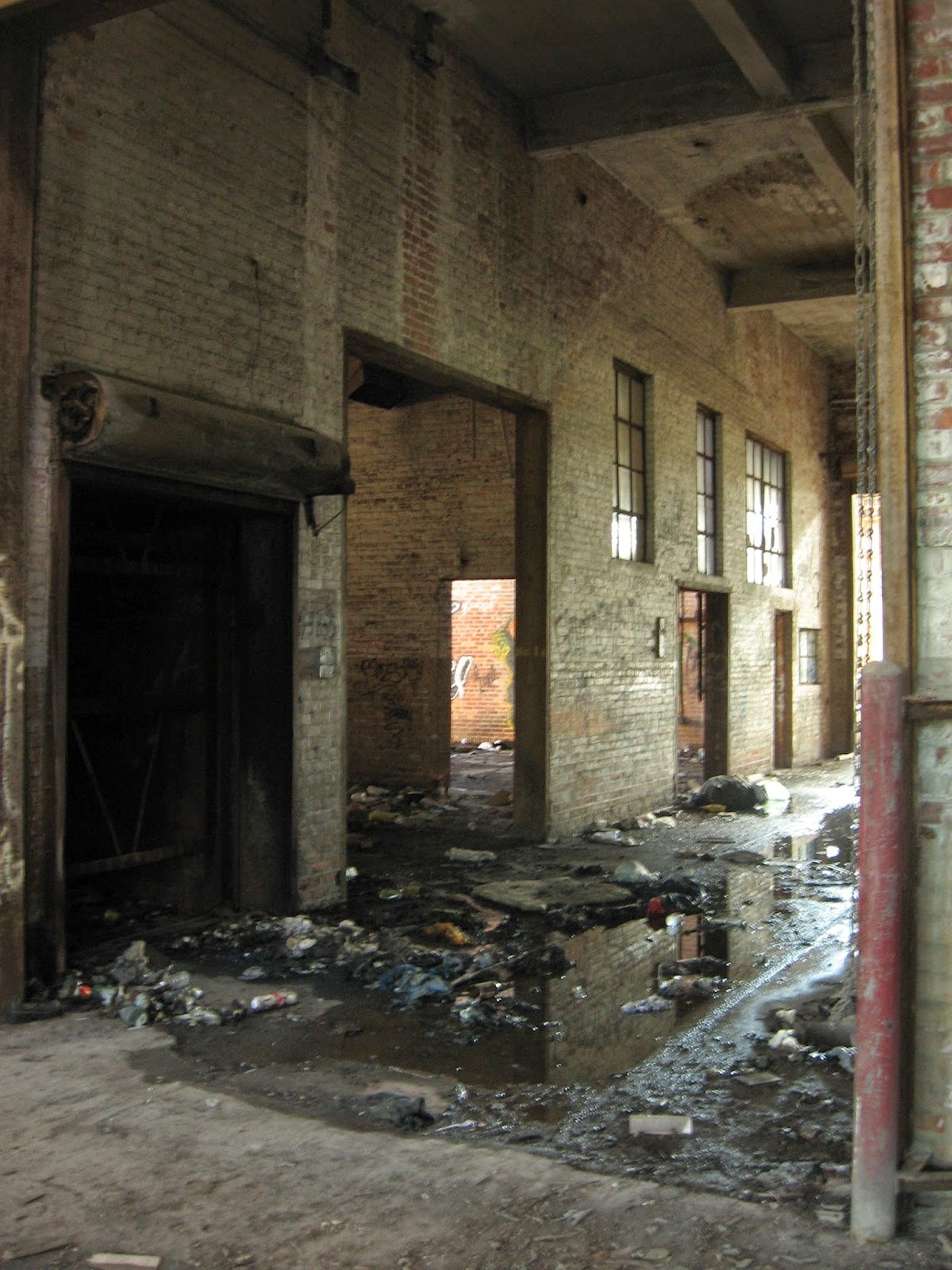 He says the Dry Dock Works the fourth-largest employer in the city, with almost 1,500 employees between here and Wyandotte. According to the c.1980 redevelopment study done on the Engine Works, the idea of having another branch of the Detroit Dry Dock Co. in Wyandotte next to the Eureka Iron Works was the result of a conversation between naval architect Frank E. Kirby and ironmaking magnate Eber Brock Ward that occurred while the two were on a train from New York to Saginaw.

Both the presidency of Frank Kirby over the Detroit Dry Dock Co. and the partnership with Eber Ward would herald very important developments in the history of the company and in the shipbuilding industry itself. The first boat produced at the Wyandotte works was the tug Sport in 1873, which went down in history as the first steel-hulled (as opposed to iron) vessel in the United States. Such innovations continued throughout the company's existence, most notably with the development of the modern icebreaker in 1888. The inventions Kirby employed on these first icebreakers continue to be used on modern ones today.

Remember my post about the Boblo Boats? Well according to BobloSteamers.com, they were also built by the Detroit Shipbuilding Co. in 1902 and 1910, under the direction of Frank Kirby, and are in fact among the only surviving boats built by this firm in existence today. The famed passenger steamer City of Detroit III was also designed by Frank Kirby, and outfitted here at Detroit Shipbuilding, as well as the ferries St. Ignace and Chief Wawatam, and the Sainte Marie, whose shipwreck can still be seen today at DeTour.

And as it would turn out, Frank Kirby endeared himself as one of Henry Ford's fondest role models while the latter was employed at Detroit Shipbuilding. 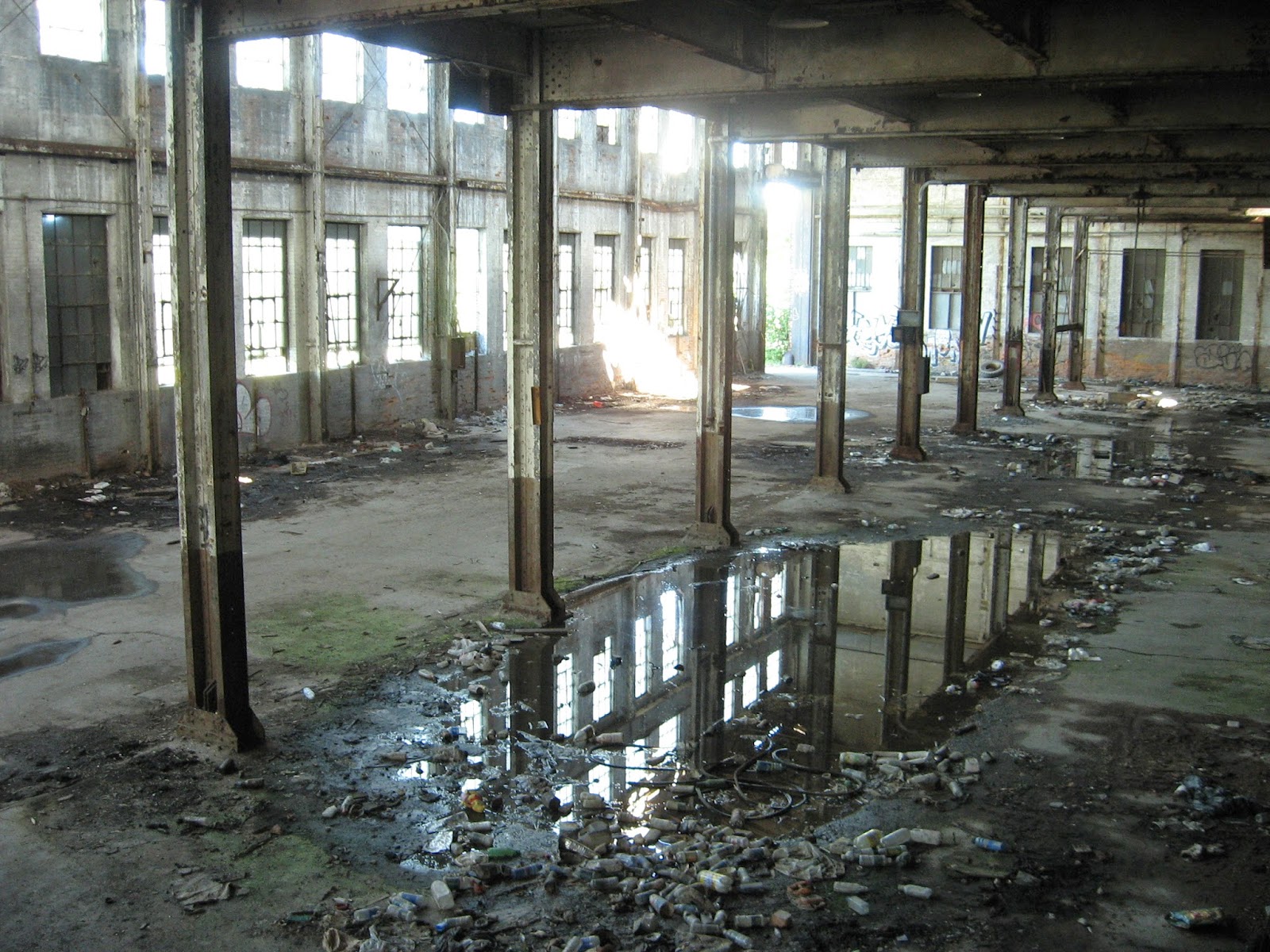 Around 1925 the Detroit Shipbuilding Co. found this plant on Orleans & Atwater to be too small for constructing the engines in the increasingly larger ships of the 20th century, and in conjunction with labor issues, decided to close the Engine Works.

Most of the real shipbuilding operations had moved to the Wyandotte works already, and this facility was used only for engine building and related outfitting. By 1929 Klug says, the company ceased to exist, and Electromaster, Inc., a stove manufacturer, occupied the plant. 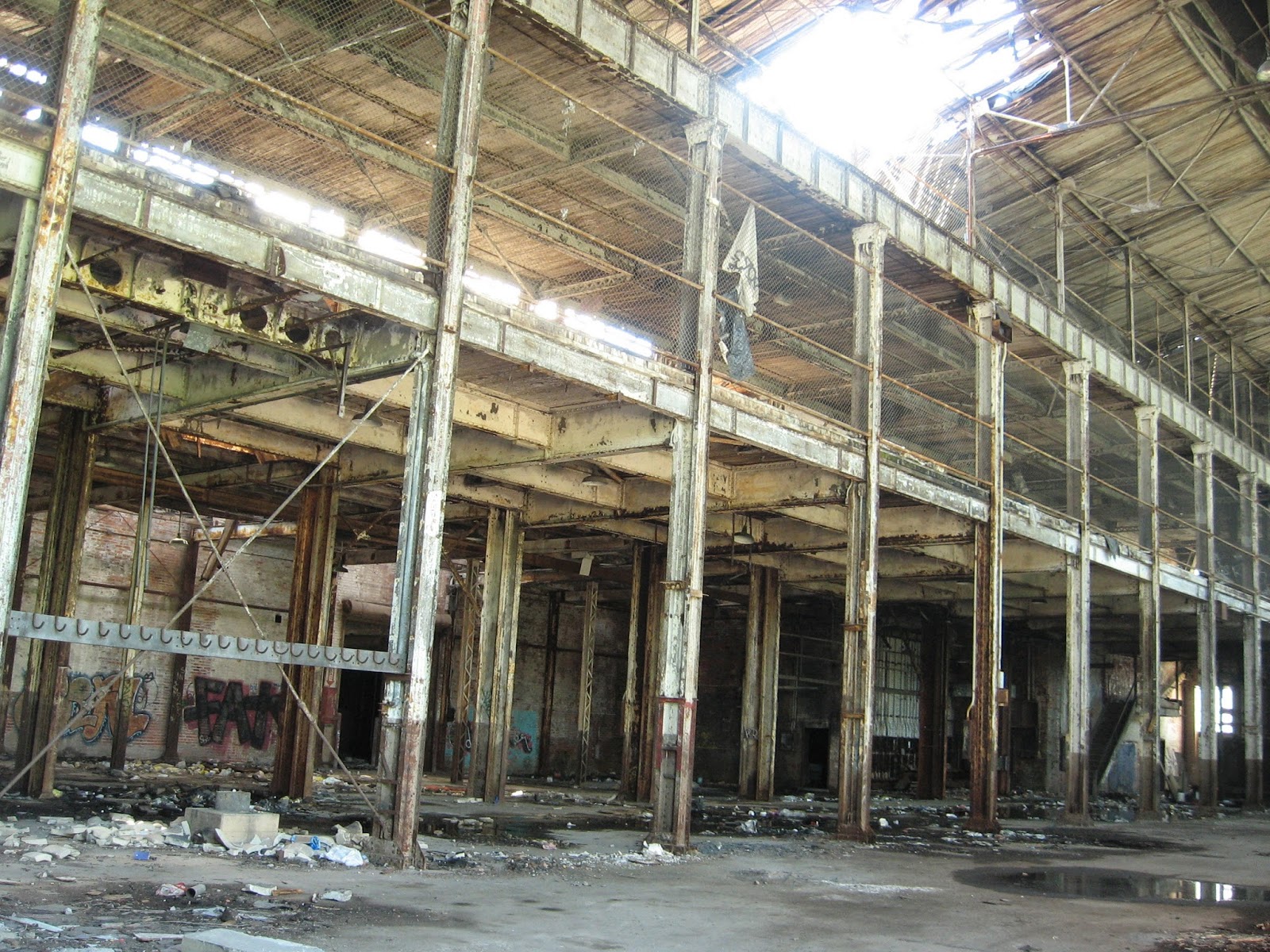 The complex was purchased again in 1935 by Detroit Edison Co., which from the 1950s to the mid-1960s used the plant as a “reconditioning and appliance shop.” The Globe Trading Company, a wholesale dealer in machinery and mill supplies, then occupied the former engine plant sometime after 1966, and purchased the building outright from Detroit Edison in 1981. 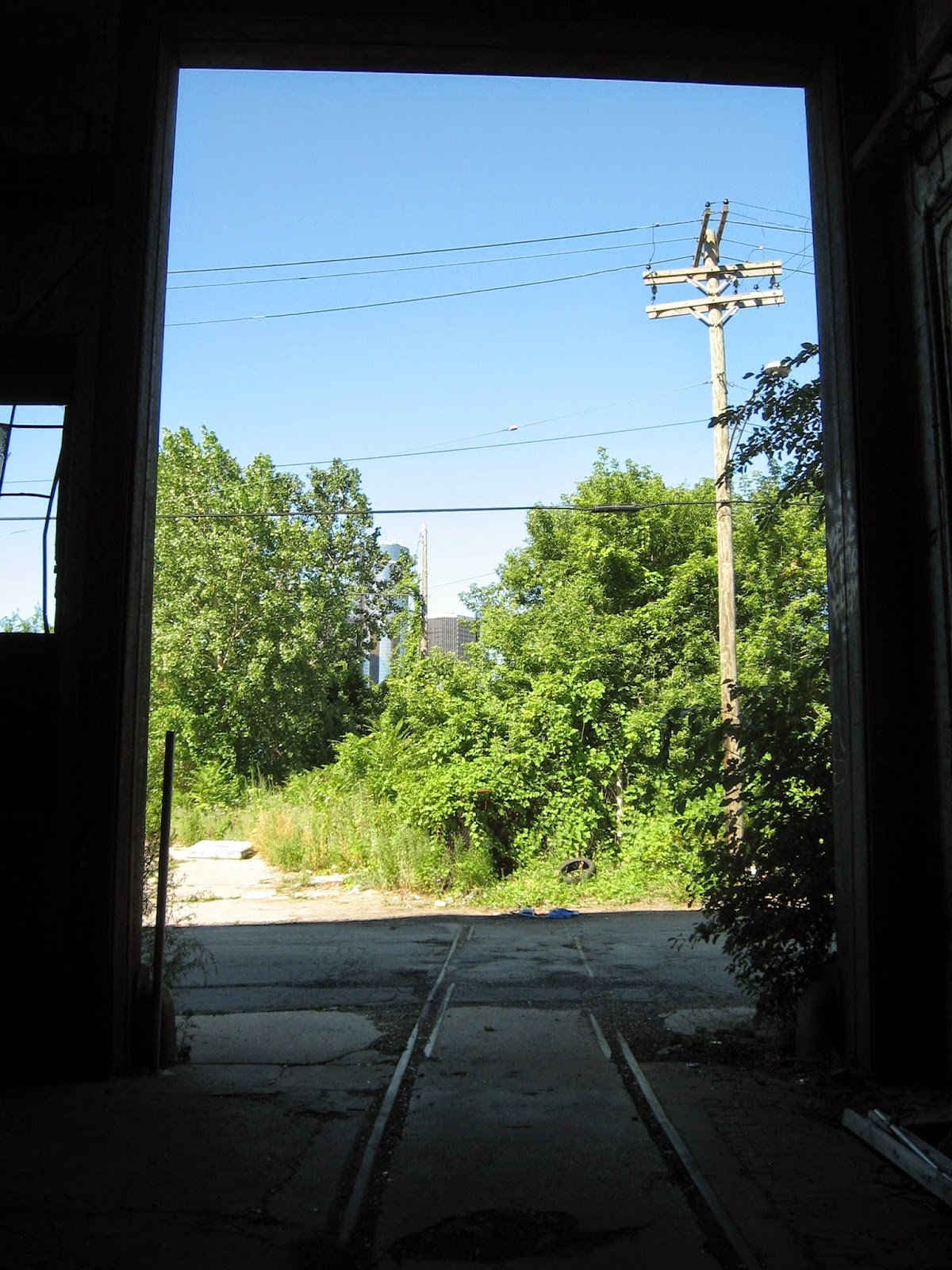 Here is an example of some of the "lattice-webbed" girders described by Thomas Klug regarding the varying examples of construction methods used in this plant: 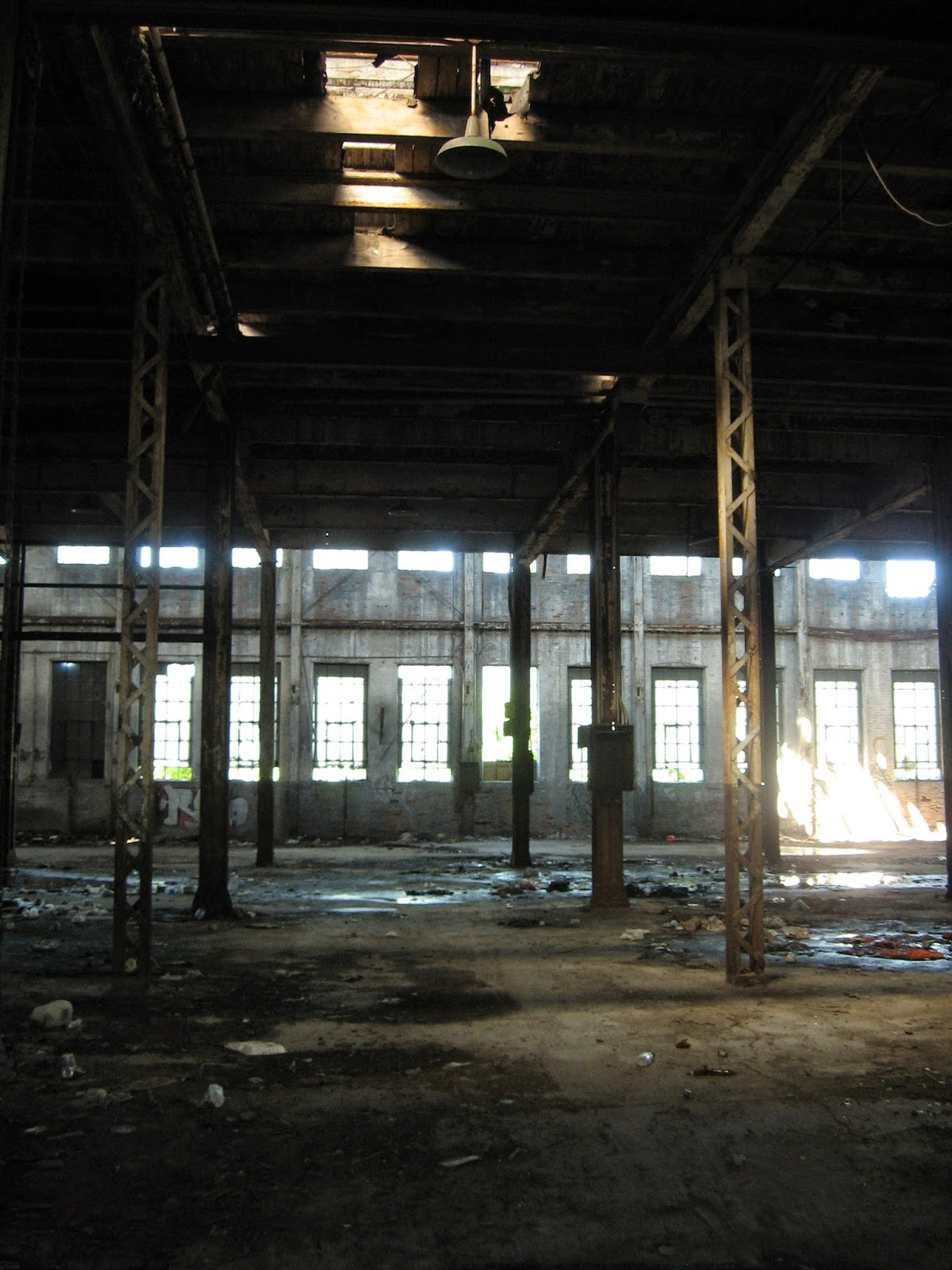 And here is an example of the "riveted" beams that preceded welded ones: 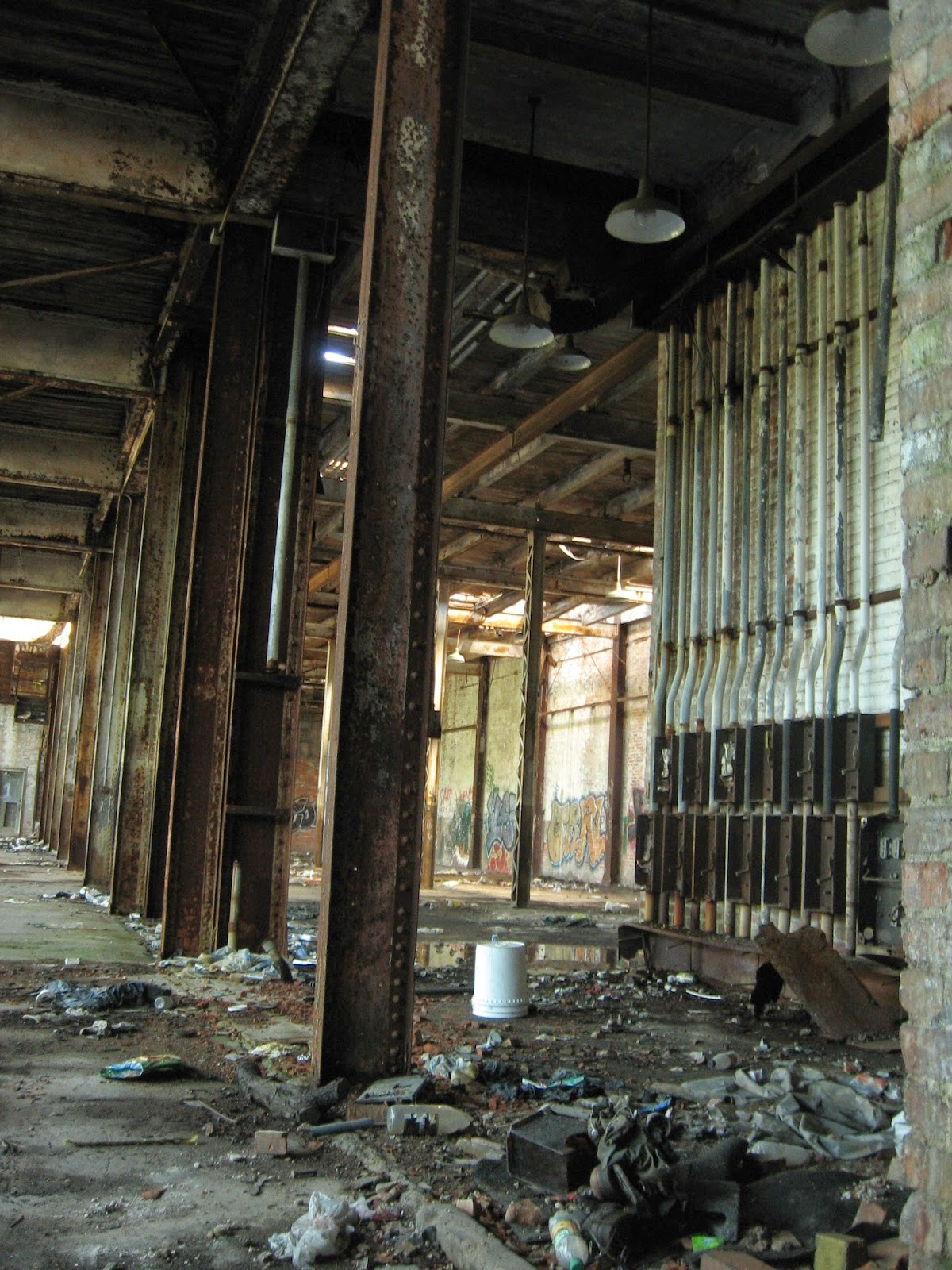 The overhead crane installed in this building was originally a Shaw, but was later replaced by one of the earliest ones produced by Northern Engineering Works, nearby.

The Engine Works was vacated in the 1990s and remained empty ever since, no doubt serving as the place of Steampunk wet dreams, what with all of its rivets and things. 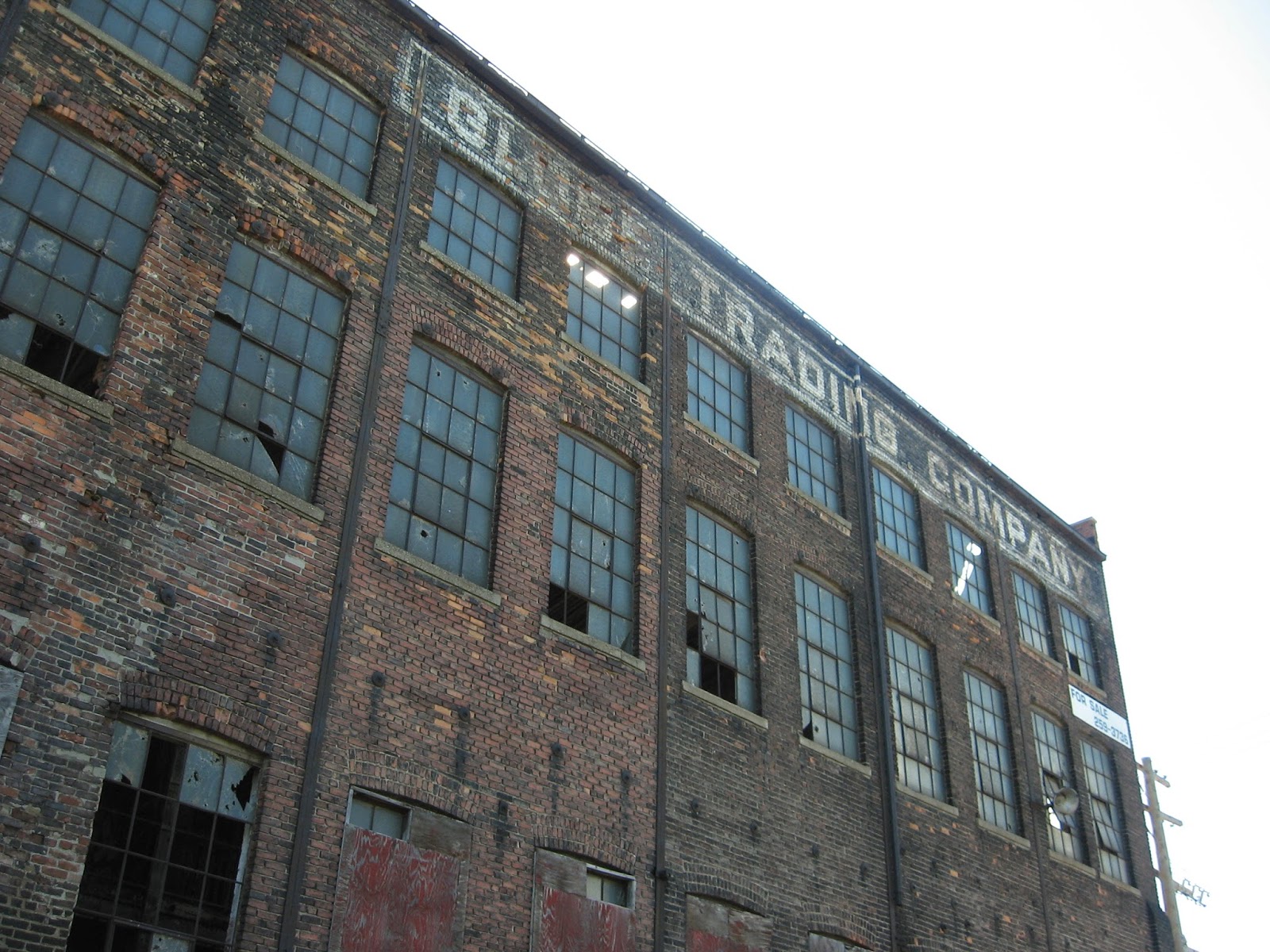 Somewhere I think I have photographs of the boiler building that was demolished in 2004, but I can't find them. 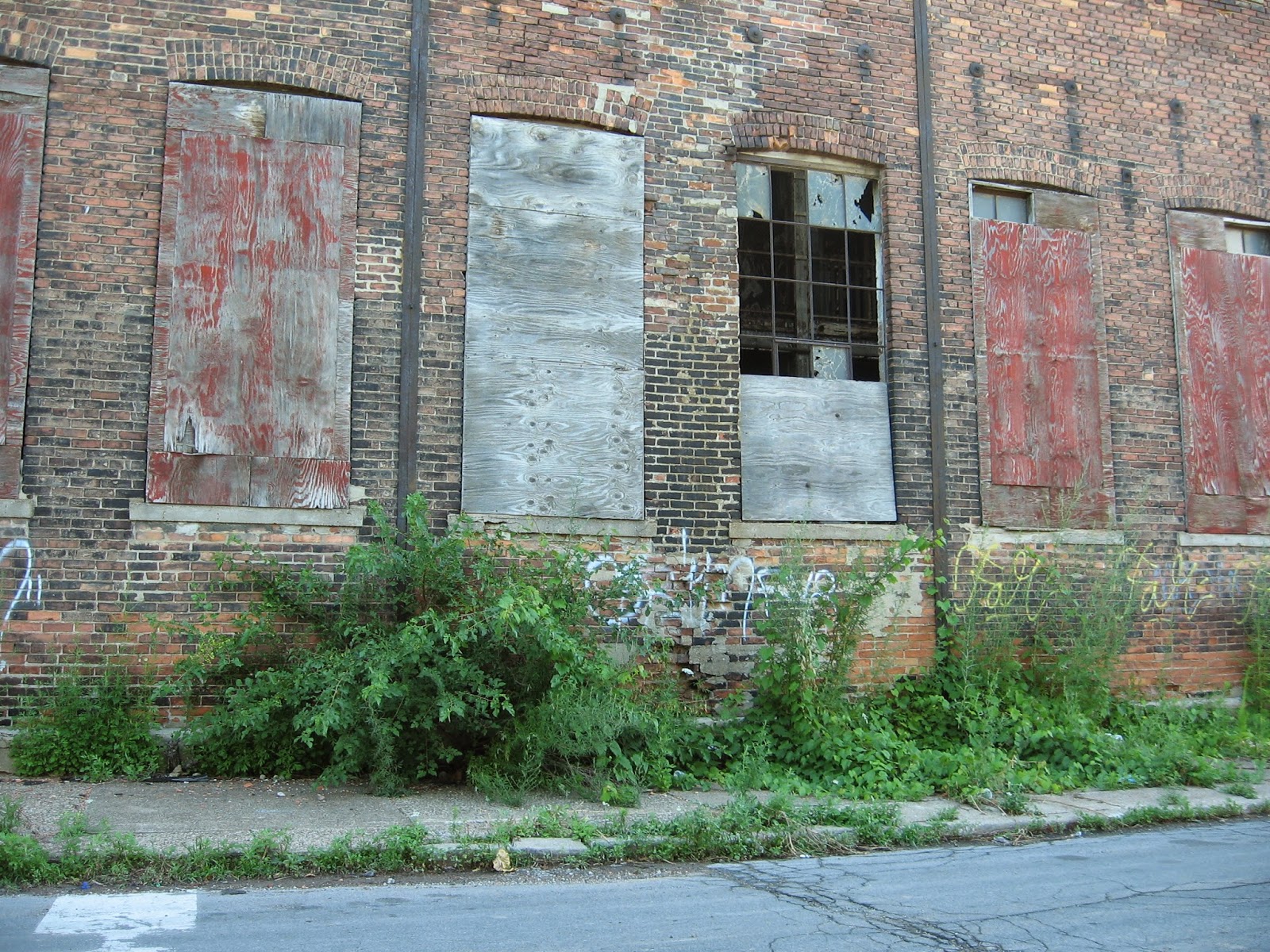