According to the former Security Trust Company Building's website (it has been converted to lofts since my visit), this Beaux-arts bank tower at 735 Griswold opened in 1925 and is faced in hand-carved Indiana limestone, designed by Albert Kahn.

We coaxed our way inside to take a rare peek in the midst of what up 'til then was proving to be Detroit's darkest days, with the threat of bankruptcy rearing its head, the Kwame scandals, the GM and Chrysler bankruptcies, and in the next couple weeks, the Johnnie Redding media circus. (And yes, the title of this post is a euphemistic pun for what amounted to B&E).

Naturally the relief stone carving on the facade of the Security Trust Co. is attributed to Corrado Parducci, though some sources say it was Ulysses Ricci's work. Ricci was a sculptor born in New York City, under whom Parducci apprenticed. Ricci did other work with Albert Kahn, but also worked on some of Wirt Rowland's best-known Detroit buildings as well. This bank was built by the William E. Wood Co. starting in 1923, according to Clarence Burton.

The original gable atop the building was removed in 1964 and the two-story flat-roofed addition you see today was plopped over the top of the building.

On the first floor was a cafeteria type area related to the last function of this building as an adult education center:

In his The City of Detroit, Michigan, 1701-1922, Clarence Monroe Burton writes that the Security Trust Co. got its start in 1906, and moved to the corner of Griswold and Fort Streets by 1908, before finally landing here at 735 Griswold.

There was another great consolidation in January 1930 that formed a holding company out of the Detroit & Security Trust Co. and four other banks, most of which had already consolidated at least once. The banks taking part retained their own identities within the holding company, which if I understand correctly, was dubbed the Detroit Bankers Company.

Financial history is hardly my cup of tea, so for me sorting all this crap out is extra tedious. Fellow armchair historian detroit1701 remarked that the Security Trust Company probably ceased to exist during the 1933 bank holiday when all Michigan banks were closed by order of Governor Comstock in order to avoid a second panic. Only the strongest banks were able to come out of the Great Depression intact.

According to the National Park Service's documentation regarding the designation of the Detroit Financial Historic District, this building was occupied by the Olde Discount Corp. stock brokerage firm (which also occupied the former First State Bank next-door at 751 Griswold) after it ceased to be a bank. Following that, a private business school known as the Lawton School moved in.

Of course if you were paying attention and you read the newer sign on the front of the building earlier, you would have noted that in more recent years the building was occupied by the Jessie C. Kennedy Downtown Adult Education Center of the Detroit Public Schools.

Details of the Dime Bank, seen out the giant lunette window, next-door:

There was a distinct lack of graffiti anywhere in the building except in one or two instances, of course meaning that this place had always stayed relatively tightly sealed to the intrusions of us nosy individuals.

Most of the original interior had been gutted or covered up with the usual dropped ceilings.

I could not help but think of the classic Monty Python skit "The Crimson Permanent Assurance" as I walked through this old financial institution, nestled in a sea of taller, sleeker modern banks.

Nearby the bleak black walls of 1001 Woodward reflect the harsh winter glare:

There was at least one ornate board room still surviving, unfortunately bathed in darkness and glare...I did my best in Photoshop to bring it out: 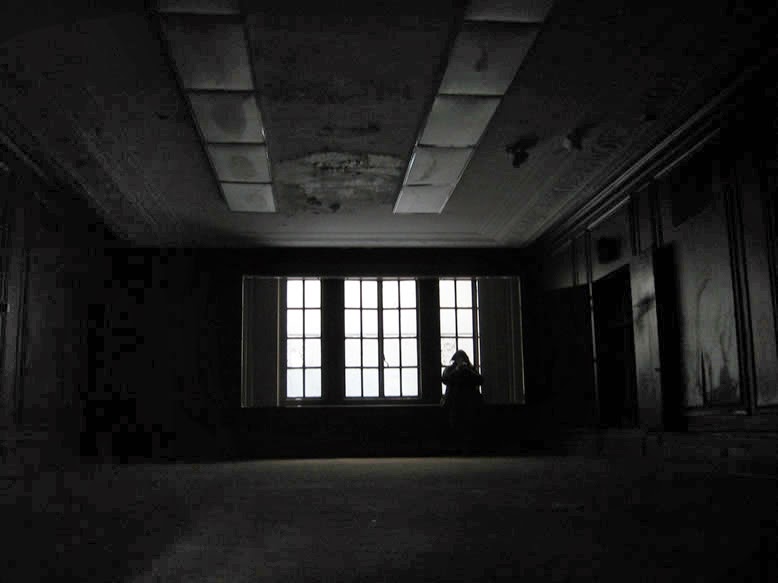 The walls were all original dark wood panelling. 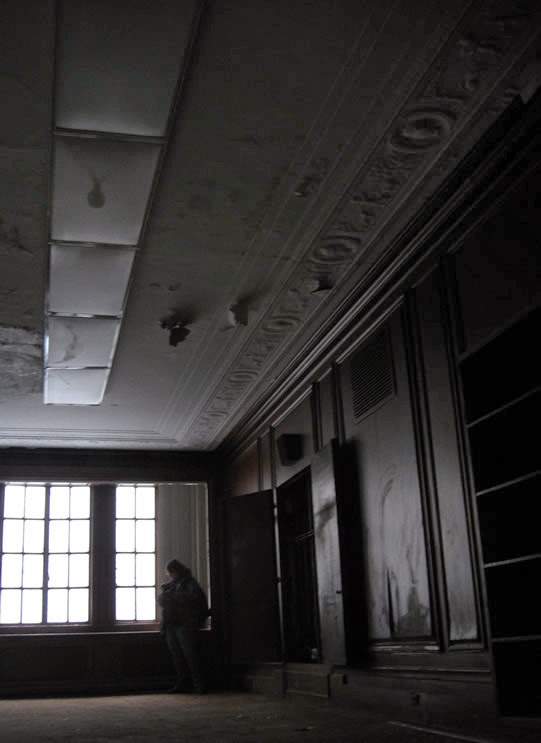 Extremely heavy-duty windows looking out over the alley, to deter the cat-burglar of yore:

On the roof, we were surrounded by a different view than usual.

According to the People Mover voice, this is the "Fort-Financial District," I guess.

The modern green-glass monstrosity seen behind my colleague was still under construction at this time if I'm not mistaken:

The Lafayette Building still stood proud, but by this, the close of 2008, we knew that its days were numbered, with a freshly renovated Book-Cadillac standing behind it:

Knowing that the Theodore Levin Federal Courthouse was bristling with super-zoom 360-degree joystick-swivel security cameras that they often use to monitor activities in surrounding areas (I've been in their security office), we decided not to linger very long in here:

I once scaled this ladder down to the neon sign:

This view up Griswold Street was to die for:

Thanks to the demolition of the People's Outfitting Building, the back of the Peter Smith & Sons Building was now fully visible:

I am embarrassed to have to say that I once again completely neglected to go into yet another potentially awesome basement, and therefore missed out on seeing the giant bank vault. The thought occurred to me after I had already gone home. Rookie 'urbex' faux pas!

Then again, the weather was bitter cold that day and going someplace warm after hitting the roof was higher on the list.