In Carbon Works, one of the crummiest parts of Detroit, a tall, smooth monolith marks the location of the Peerless Cement plant's ruins like a gravestone. The lettering once was probably painted for visibility, but in death it has become as ashen in color as the cement the smokestack is made out of:

A Geological Survey of Michigan lists the date of the company's founding as August 1896, but Clarence Burton's History of Wayne County says that Peerless was organized in 1897 under the name Peerless Portland Cement Co., in Union City, Michigan.

It moved to Detroit in 1924 to this location, West Jefferson Avenue at Brennan, on the Rouge River (c.2006 aerial view). Clearly, the structures that are here today are much more modern than 1924, as the plant had probably been continually updated throughout its life.

In January 1928 the company merged with the New Egyptian Portland Cement Co., and in December 1929 was renamed the Peerless Cement Corporation.

The original Peerless plant at Union City comprised 675 acres of marl beds near Turtle Lake. The marl was present on the surface, and though it was very dry it contained little organic matter, so once water was added it was very readily worked, according to the Geological Survey. The Peerless plant there was said to have the most advanced rotary mills in Michigan and one of the "finest" power plants too.

Peerless erected another plant in Port Huron in 1924, on the site of old Fort Gratiot. It was demolished in 1973.

The Detroit plant covered a full 14 acres and as of Burton's writing in 1930 could produce 1,750,000 barrels of cement annually. The plant employed 350 men, and 80% of that output was sold in the Detroit area. He wrote that Peerless could also produce a "Super-cement," upon demand. What that means, I have no idea.

Interestingly, Burton notes that the offices of the company at the time were located in the Free Press Building.

As of 1930 Peerless still operated a plant at Union City with a capacity of a million barrels per year, one at Port Huron producing half a million barrels a year, and another at Fenton that was not in operation. The output of these plants was sold throughout Michigan, and northern Indiana and Ohio.

If I'm not mistaken, these long tubes are called kilns, and actually rotate as part of the process...you can see the rollers on the tops of the cement piers:

We happened to drive in here one evening and made a quick once-over as the sun was setting. We quickly knew that we would have to come back at some point for a more thorough go-over.

The site was not exactly abandoned, either...it was clearly still being used as a cement shipping depot, where large stockpiles of cement material offloaded from freighters were stored on the grounds. A Maritime Security Level sign hung on a nearby office, and the Detroit Water Department's Springwells Station was immediately next-door.

Author Robert Conot wrote that in the 1960s while companies were fleeing Detroit for suburban locations, Detroit Mayor Jerome Cavanagh was doing his best to convince them to stay, against all odds. The Burroughs Corp., and Peerless Cement were two that he was able to convince to stay.

But, as Robert Conot notes, "for every company that stayed, two were leaving." Peerless was acquired in the 1970s by the Edward C. Levy Co., a company that got its start hauling slag from the Ford Rouge Plant 100 years ago. Levy also purchased the Clawson Concrete plant on Hastings Avenue, which I explored in another post.

Across the Rouge River, the U.S. Gypsum Co. plant in the city of River Rouge:

This place was a veritable jungle-gym: 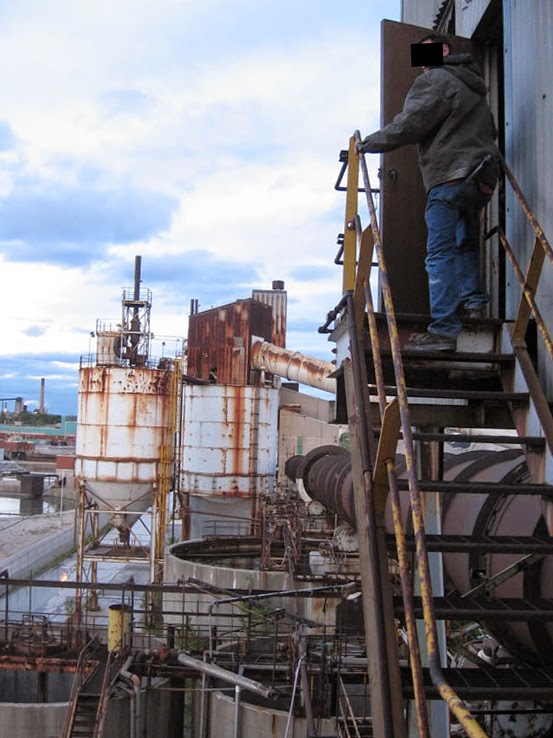 You can see how close the water treatment plant is...the security truck kept driving in here, so we had to be cautious:

The church in the middle of the next shot is St. John Cantius, which closed a year or two after I took the photo:

An old railroad spur went directly under the silos:

From inside a vast warehouse, the aggregate piles look like mountains:

One of the many bascules that span the Rouge River:

This was about as close as we got to the bascule before we noticed what looked to be a railroad cop approaching, so we sprinted out of there as fast as we could before we got our asses shot up with rock salt:

This large vat was almost completely filled with water:

In the distance, Zug Island belches out its once-in-awhile green haze:

Back in the cavernous storehouse...

Down in the lower levels of the complex, around the bases of the machinery, it was like being in a dim forest--very different from the airy views to be had up in the maze of catwalks above.

After a short while I became aware that a large beast was prowling very near, but I could not see it. Thoughts of being devoured by a starved Rottweiler came to mind, and upon discovering a vast collection of large-diameter feces in what could have been the beast's potential lair I quickly climbed the nearest ladder out of this dark jungle.

I joined back up with my associates and we decided to ascend the tallest structure on the site, the cement silos near the train tracks, since it had been passed up last time when the sun was setting.

Everything inside was covered in a layer of fine dust, and there was a spiral staircase going all the way up.

It was a very long climb, I would say easily the equivalent of ten stories.

On the roof, the view was incredible. To this day, this was one of my favorite rooftops to chill out on. 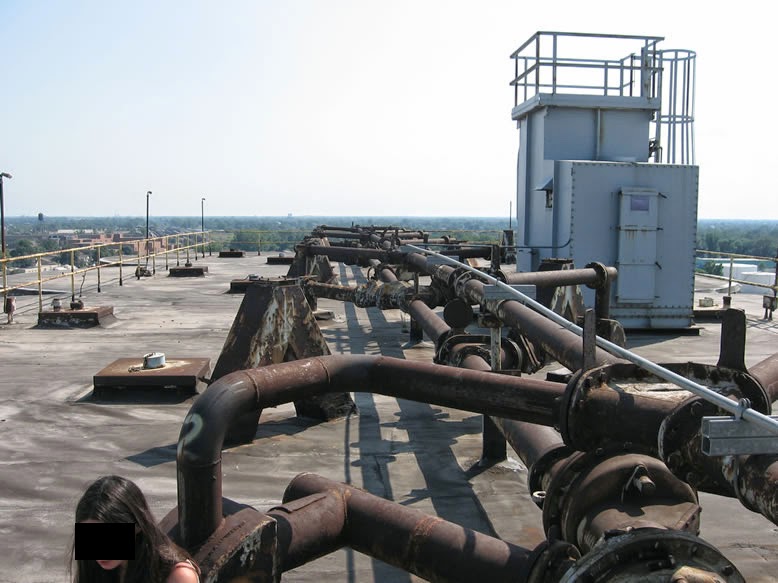 An overview of the Peerless Cement works:

Below, the railroad bascule:

On the left here is seen the still-operating plant of the St. Mary's Cement Co.:

A ship was even docked there at the moment:

Looking down the Rouge River to where it empties into the Detroit River:

Looking up the upriver, toward the mammoth Ford Rouge Plant:

In the distance the gargantuan Ecorse Works of the Great Lakes Division of U.S. Steel took up the entire horizon:

I talk more about Great Lakes Steel in another post. The train tracks stretched out past I-75 to New Center:

Not many people know this, but if you stand in the middle of Delray Junction and look down the railroad tracks in either direction, they point precisely at the Fisher Building, and the RenCen, respectively. Strange coincidence...

Anyway, this zoom view toward the mouth of the Rouge River shows the Jefferson Avenue drawbridge, which you may remember as the one that was recently crashed into by a freighter when it was lowered too soon:

Today there are still a couple remnants of the Peerless Cement plant still standing, but most of it has been demolished.