The next morning when I arrived back at the Adventure Mine, I was the only person there. I went into the office and the guy said he could take me himself. Apparently for $55 you can take the extra-special tour, which involves rappelling and climbing. Yes, please.

They geared me up with a harness and everything, and I brought in a real tripod for a change. He led me back outside to where a surplus Swiss Army troop transport waited to drive us up to the entry point. After a very steep, bumpy ride over a boulder-strewn path through the woods, we were dumped off and I found myself staring at another adit: 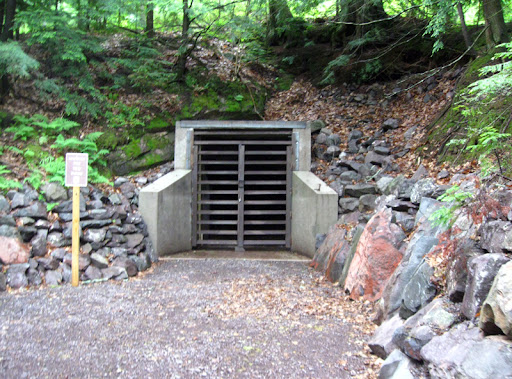 My guide walked forward and unlocked the heavy iron gate into the mine. The clanking of metal latches and bars behind me ceased and I found myself locked inside the yawning black coldness of the mine. My guide illuminated his head lamp, and we moved forward. On the floor I could see the old wooden ties for the tram rails: 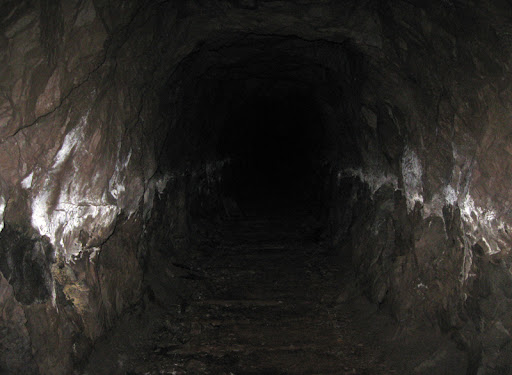 According to my guide, they were still the original timbers from the 1800s. This place of course reminded me of my trip into Colorado's Gilman Mine, but not as wet and mucky. Or as orange. We soon came to a junction room where drifts (horizontal tunnels) extended out to both left and right. There was an old table full of relics sitting off to the side: 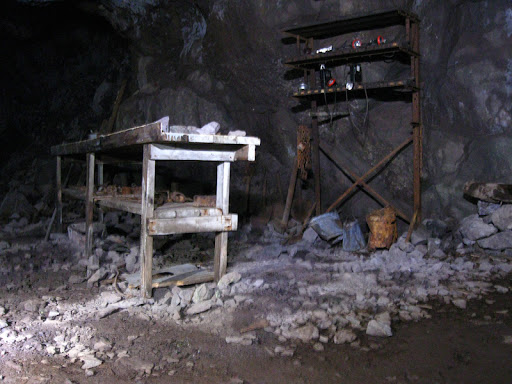 The drifts here are struck at an angle because that’s the orientation of the lode, which is why a lot of the tunnels you’ll see are slanted: 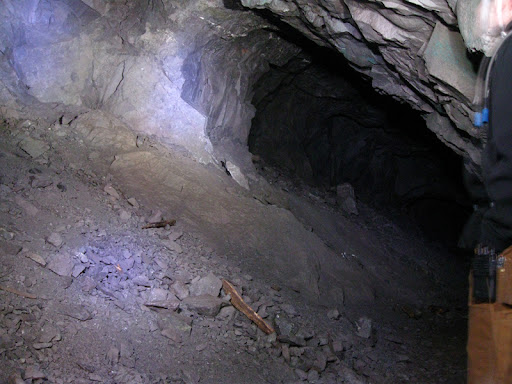 Copper veins here occur at about a 45-degree angle so that’s how it’s mined out along the lode. As the copper is found, you mine out of the ceiling up as far as you can go before it compromises the structural integrity of the level above, or you stop finding copper, whichever comes first. My guide talked all about some of the more technical aspects as I sat and light-painted pictures. Or, tried to... 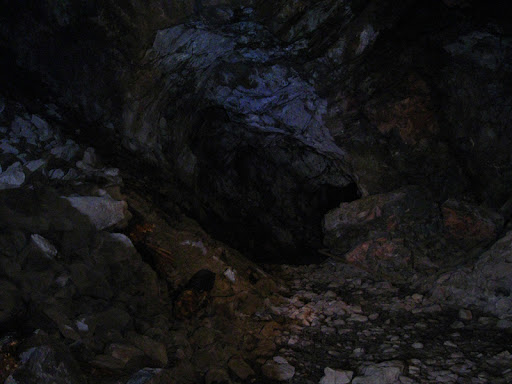 Mining here at the Adventure started in 1850 and always showed promise but never turned an actual profit. This was another site that had been presaged by ancient copper diggings done by aboriginals.

According to Lawrence Molloy, activity peaked in 1857 but almost died in 1880. It changed hands in 1894 and was run more successfully until 1908, but still never made a profit. It was worked again during WWI, but was salvaged for scrap in 1930. 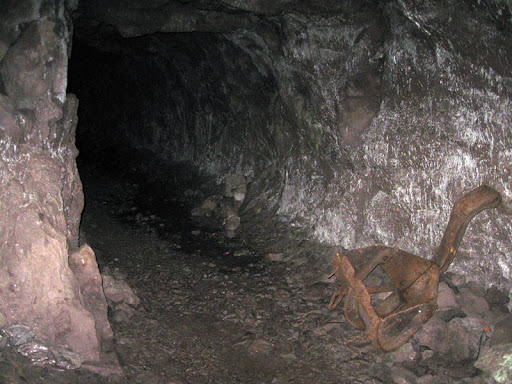 As usual, work here was done by candlelight in the beginning, and the idea was to drill and blast until a solid copper mass was found. Then men came in with hammer and chisel to find the edges of the ingot, and break it into pieces for easy removal. This was inconceivably laborious.

My guide showed me a spot where a large ingot had been uncovered right before work stopped…the exposed part probably weighed 300lbs. It was unclear just how much more of this piece of pure copper lay within the rock, but the overall expense of working this mine had become prohibitive despite estimates that Adventure managed to remove only a mere 20% of the copper available in their mountain. 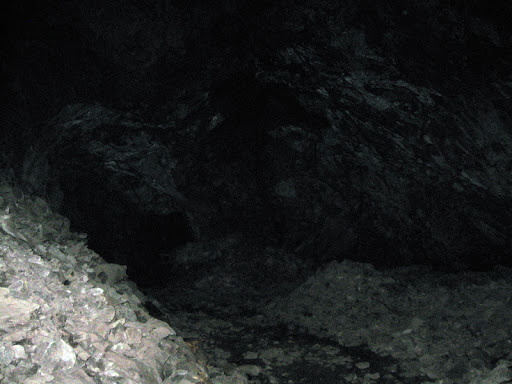 We ventured deeper into the bowels of the Adventure. After the era of sledge and hand-bit drilling came the pneumatic drills. Here they had a one-man drill set up as if ready for work: 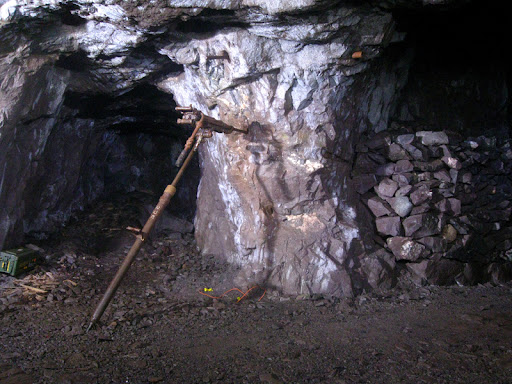 This was unaffectionately called the “Widowmaker” because of the fact that instead of having teams of men operating together, now one man was forced to work alone all day with this noisy, dangerous piece of shit. If something happened, he had no partner to keep an eye on him or to help him out of the mine in case of mishap. I am also told that it was called the Widowmaker because it had no water lubrication for the bit, meaning there was a lot more dust and the onset of "Miner’s Lung" came much sooner.

To the right of the drill you see a stacked stone wall. When the drilling is done for the day, the dynamite comes in, and the blasting is done at the end of shift. The dust clears overnight and the trammers come in to haul out the freshly blasted rock. Sometimes with poor rock they just piled it along the walls of completed drifts if there was space next to the tram rails, so that they don’t have to cart it all the way out of the mine, and that’s what explains the wall you see here. The yellow wire you see on the ground is blasting wire. Here’s a post drill, which is a little safer: 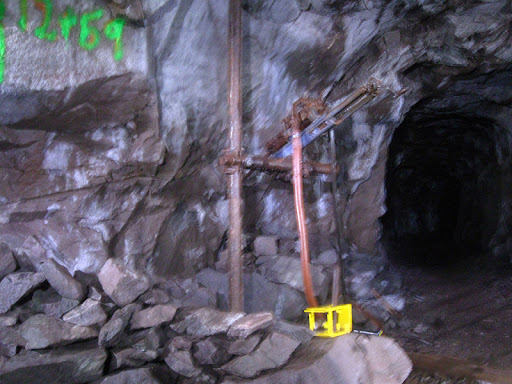 We came to an adit opening in the side of the mountain overlooking the forest below. The lumber you see is going to be used to construct an observation deck of some sort: 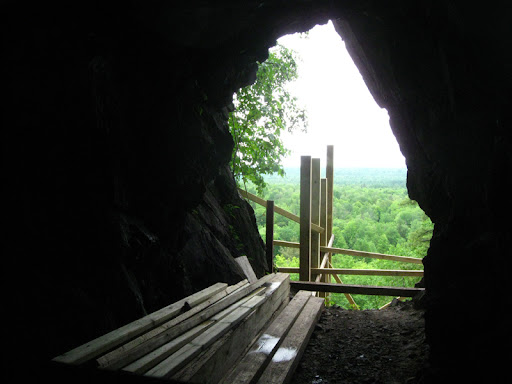 In the distance were the stone ruins of the powderhouse, which I would explore later on. My guide used this opportunity to radio back to the office so that a second guide could come and assist with the descent to the next level. Moving back into the mine we came to the entrance to the second level, which was a winze struck on the usual 45 degree angle--this is where we would have to rappel: 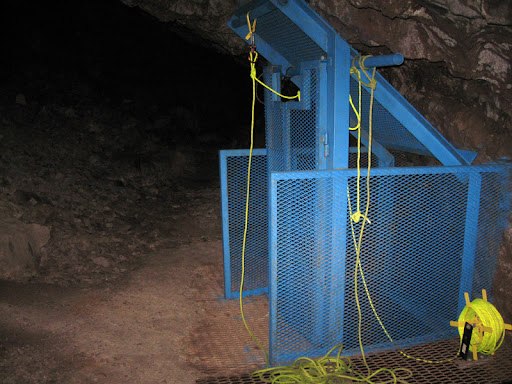 A winze is a shaft that is bored downward to connect two or more existing levels of a mine. My guide unlocked the cage over the winze and I clipped my descender and karabiner onto my harness. At this point the other guide arrived and descended the winze first in order to set the line for us (or something…I dunno, I wasn’t really paying attention). I tied on and went down next, surprising myself with how well I remembered how to rappel after all these years since Boy Scouts. Indiana Jones, eat your heart out.

At bottom I waited for my guide to come down inside a large hollowed out room that reminded me more of a cave than a mine. Now that we were all together again I found out that we had not yet reached the second level--we had to clip on to an anchored line along a wall over a dangerous chasm and walk about 50 yards to a certain point where we could climb down again into another hole. We also had to switch to a second anchored line about halfway. This reminded me more of a cave than a mine. Here’s my guide…we had reached the second level: 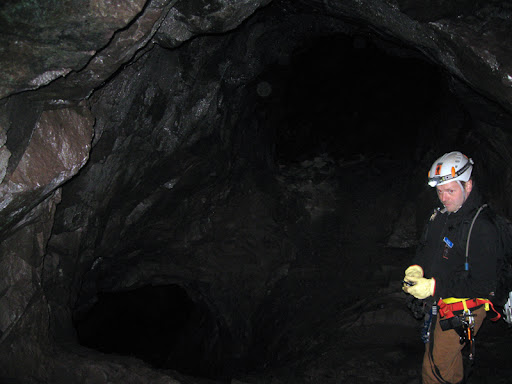 After the mine changed hands in 1894 and became the Adventure Consolidated Mine, everyone was fired and the better, more experienced miners were allowed back under what was called the “tribute system.” In other words you were no longer paid by the day, you were paid by how much rock you cleared.

It was sort of chaotic; no longer was there an orderly plan set in place for how the mine would be worked, now the men were basically just told to “go in there and bring the copper out.” This is why the Adventure became more productive, but it also resulted in a disorderly mess of tunnels honeycombing in every direction, as you can see in the above photo.

No more trammers either; waste rock was strewn wherever it could be dumped and soon accumulated into quite a mess down there. They also stoped the shit out of the place, which wan't entirely safe. Here is a blurry shot looking up a stope that was opened clear out of the side of the mountain, and was letting daylight in: 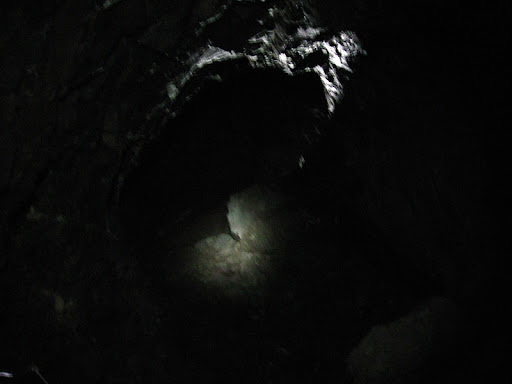 As we forged ahead we passed a pit where I could recognize the oily scent that had enticed me the night before when I smelled it wafting out of the adit in the dark--the pump was down there. According to my guide they had just recently pumped out the second level, which is why they were able to conduct tours down here now.

Every level below us was still flooded however, and I want to say that there are 19 total levels under the Adventure…? That may sound like a lot, but the Quincy Mine had 92 levels…. We started to come up and arrived at what is called the “Ice Cave.” 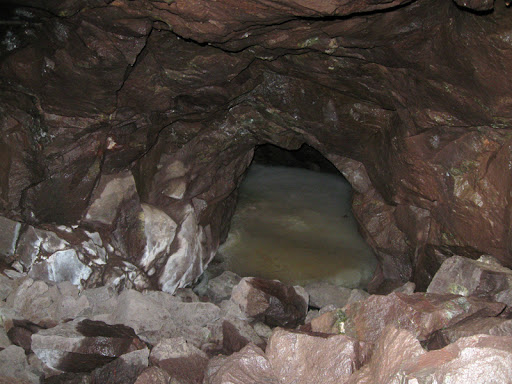 I can’t remember if it was a way into the third level or what the deal was, but there’s a hole with ice in it (yes, in June) which apparently never thaws. 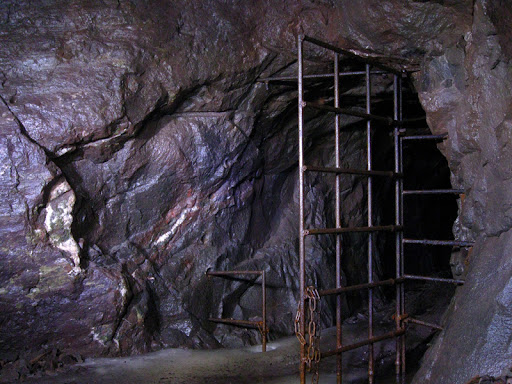 In later days I guess miners used this to store perishable goods before electricity. We now continued on toward the exit, which led up a “raise” to another adit: 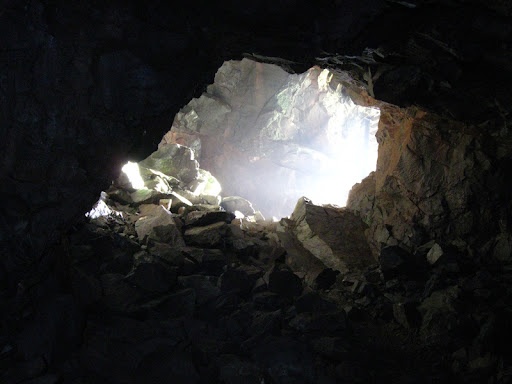 I shot one last pic looking back into the adit, and we emerged from the mountain’s darkness: 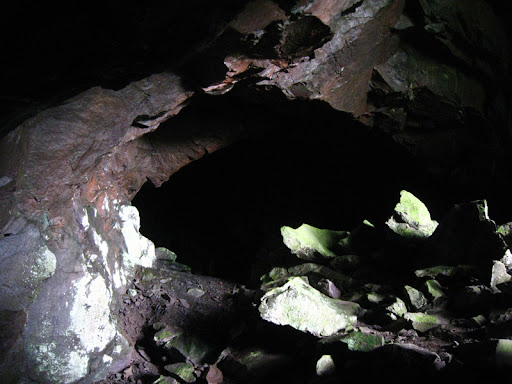 This is where we popped out: 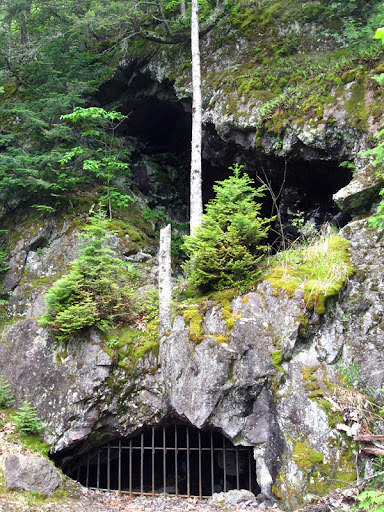 Recognize it? We walked back to the office and along the way passed the hoist foundation of the #3 shaft: 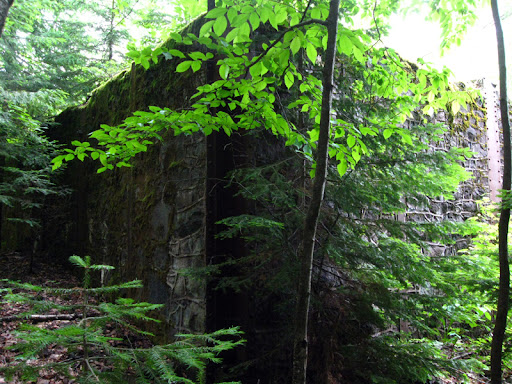 I was so bummed that I forgot to get a shot of the Swiss troop transport though. Oh well. I sat in my car and ate lunch while perusing my map of the area to see about hiking around to some of the many other nearby mines.

Email ThisBlogThis!Share to TwitterShare to FacebookShare to Pinterest
Labels: Adventure Mine, Ontonagon County