The way back from Mt. Ojibwe was decidedly less scenic than the way up, though my mood had undoubtedly darkened the landscape. Also, the route back from this junction was much smoother, topographically. This was the way I should have gone in the first place. Just before coming back into the area of Daisy Farm I came across a rushing stream, near which I saw yet another crazy wildflower of a type I’d never seen before. Figuring that I had better take a picture of this or risk a completely fruitless waste of a day, I stopped to take my pack off and get my camera out. It looks like another variant of Lady Slipper: 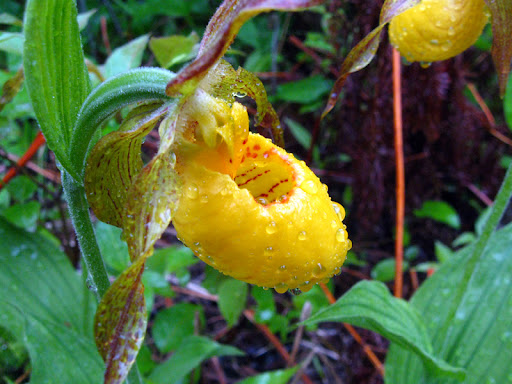 Arriving in shame back at Daisy a few minutes later, I began to look for a shelter. Everything I passed was full. It was pouring rain. Just as I was about to believe that I was indeed f#$%ed, I found one last shelter with no one in it. I dove in. I dropped my gear like a ton of wet bricks and plopped myself down painfully to pry off my sucking, waterlogged boots. This was misery. I peeled off the cold, now shiny-wet jeans I was wearing and opened my pack to find the dry stuff. I dug…and dug. And then I got pissed and tore everything out only to find that…I didn’t have any more clothes. I stood there with my brain giving me a 404 error for several minutes wondering how the fuck this could be. I searched the now completely empty pack once again, this time with a flashlight and my head fully inserted. Nope, there weren't any invisible clothes hiding in there still. My brain started making grinding noises like an angry Apple II disk drive, and smoke started to waft from my ears.

I had to reboot for a minute, and then started mentally piecing together what must be happening. As if in a vision, I saw the rest of my clothes now peacefully sitting, neatly folded in the backseat of my car, back in the world. I must have somehow forgotten to actually put them back in my backpack the other day when I woke up in Houghton and changed clothes in my car before getting on the boat…? 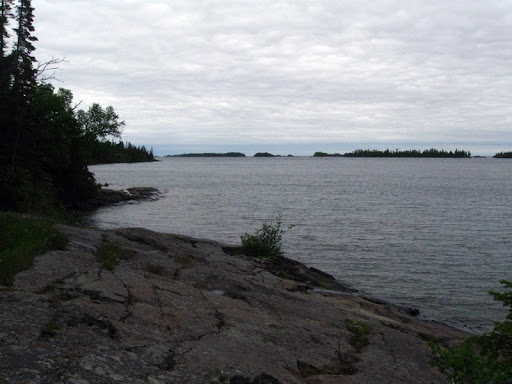 I did have a laundry basket in the car full of other assorted garments that I had brought on the trip that I did not intend on bringing to the island. That must be what happened; the two sets must have gotten mixed up. Well, it didn’t matter anyway. I had to cope. What do I have? I laid out and took stock of what was here before me:

…plus what I was wearing, or had just removed, including: a wet hoodie, a partially wet t-shirt, and my soaking jeans and socks. I didn’t have any other pants. Nor did I have any serious socks. This was not good. I also noticed that I had a nice heavy bottle of sunscreen that was completely f#$%ing useless, and some nice heavy rope I didn’t need either. I contemplated throwing that bullshit into the woods as I began hanging articles to dry on the walls of the shelter, in hopes that the slight wind that was coming in might dry them eventually, cold though it was. When I turned my boots over, dirty water poured out of them like a jug. My dripping pants added to the soup that was now collecting on the floor. I was shivering-bare-ass naked, and it was 50F degrees out. All I could hear was the sound of falling rain on the roof and leaves nearby. What a disaster. What am I going to do with all this spare time now…? I didn’t even have any idea what time it was, though it felt like evening. What I didn’t know is that it was only 1:30 in the afternoon. And I could do nothing now, because I could not get dressed to go outside. I put on three pairs of dry socks and the long underwear and got in my sleeping bag. To replace the wet hoodie, I took the used but dry long john shirt and tied it around my head like a bonnet. That kept me decently warm though I must have looked like a Drooling Ward inmate.

Excruciatingly slowly. I kind of wanted to go talk to the other campers in order to break the pervasive solitude, but that would’ve meant getting back into wretched wet clothes, and walking around in the rain again. I paced back and forth in my shelter to keep warm, and to keep from going nuts. The melancholy crept into my mind like a poison. I had no idea what time it was, how much longer I would have to wait before I could eat dinner or go to sleep (the only two events left on my itinerary for the day), and I had nothing to do except stare at the graffiti and that damned map again. The walls began to close in. This was worse than jail. 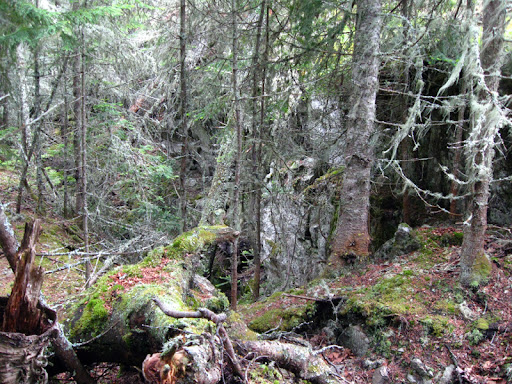 I swept my shelter out a couple more times. I did stretches, sit-ups, and push-ups. I tried my hardest to fight the loneliness. There had been no sign of the sun since I had left the mainland to come to this forlorn place, and it had been raining for 24 hours. I had left Detroit to seek solace here from my troubles, but now I was realizing what folly that had been--I was trapped here with nothing to do but dwell on them, and slip back into the clutches of depression. I hoped to god someone would happen to walk by so that I could ask them what time it was at least. It was a long time before that occurred. When they did, I barely managed to grab their attention in time, and they said it was 2:20pm.

2:20pm? How the hell am I going to pass the eight hours that were still left before I could realistically go to sleep? I couldn’t just go to sleep now, because that would mean that I would wake up in the middle of the night…and if you think sitting alone here in the daytime is bad--just wait ‘til after dark. I remembered waking up briefly last night to roll over, and it being utterly pitch black…and all I could hear was the distant relentless roar of Lake Superior. If I was going crazy now, I’d be absolutely out of my skull by morning if I were forced to endure sitting through that all night. I could drink some more of the whiskey, but there really wasn’t enough for me to sit and get drunk on if I intended to make it last the rest of this trip. So I rationed it out. I took just enough to calm my nerves every couple hours. I wanted to make a fire, but fires aren’t allowed here, and I would have to get dressed in order to go outside the shelter to get wood anyway. And I’d have to sit in the rain to sit by a fire.

Normally I am not this easily succumbed to gloominess, but there was just something about the whole ordeal (on top of the weight of my already existing life problems) that just made me crumple. Normally I love being in the out of doors alone--that's how I've always done it. I was now wishing I had somehow hijacked the attention of the people who I’d asked for the time for a little longer. They were in a hurry to get wherever they were going however. I sat and studied my map some more, stared blindly out into the gray dripping woods in front of my ramshackle little three-sided universe, and read more of the words scratched into its planks. Some of the stories that were scrawled here were quite melancholy indeed; I was not the first person to sit here in suffering on this ragged, forlorn shock of land in Lake Superior’s bosom. If Superior has a heart, it is surely Isle Royale--and that heart is surely made of stone…solid, cold, unforgiving stone. I never felt more alone in my life than I did that night.

It would be different if it were sunny and mild, but I knew that it was just going to keep raining for days. My trip was now basically a wash; with no dry pants how would I be able to do anything outside? I knew now that the rest of my time here would basically consist of putting wet clothes back on and hiking in them through more rain just long enough to get to the next shelter, so I could do this captivity all over again. Somehow I had to make it through two more days of this hell. Worse yet, I now had to recalculate my itinerary to somehow use up all this extra time. Tomorrow the only option I had was to hike back to Three Mile and set up camp there again, but that would mean sitting in the shelter for another eight or nine hours doing nothing again. Or I could slog all the way back to Rock Harbor and hopefully find a shelter there, but then I’d be forced to do the same thing for two nights instead of just one. I contemplated going to the Rock Harbor Lodge and trying to see if they still have a room available, but come on--I had to salvage some shred of my pride. 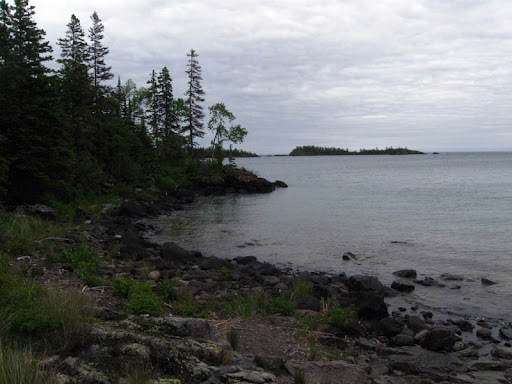 Just knowing that you’re a million miles from anywhere, in a lightless forest floating in the middle of a raging cold sea is oppressive. Worse yet, I had a really sad song stuck in my head since I got here. Actually I’m told that if you bring a radio to Isle Royale you'll mostly just hear empty airwaves, but it has been said that sometimes there are pirate stations that you can pick up out here. I think the nearest actual town is Thunder Bay, Ontario, but that’s 40-some miles away and they probably don’t have any very strong commercial stations. Obviously cell phones don’t work out here either.

It was a lot more nervous pacing, and diligent sweeping of invisible dust on the floor before the drab daylight began to flag, hinting of night’s coming. And I carved more than a few of my own terse epigrams into that shelter’s plank wall. But somehow I made it through. As soon as I thought it was starting to become slightly darker outside, took my last miniscule, sparing swig of Yukon and sat listening to the distant haunting calls of the loons before I finally faded out.