I woke with the dawn and silently left my shelter. Both my companions were still asleep. I cast good vibes over them as I shouldered my pack and hiked to the docks, the memory of the frightening incident last night still lingering in my mind. I set my gear down on a luggage cart except for what I was going to carry onto the boat with me. It was still way early, and the boat didn’t leave until 9am. I decided to go up to the Smithwick Mine, which I had somehow missed on all my other trips to Scoville Point. 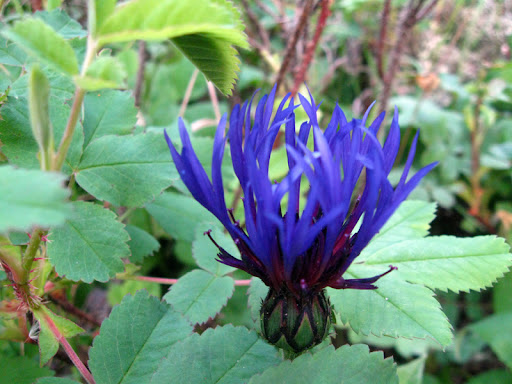 While I was wandering Rock at this early hour I came across a couple fabulous things to photograph, namely this new flower, and a pretty wild moth. Seems there's never nothing to look at while on Isle Royale… 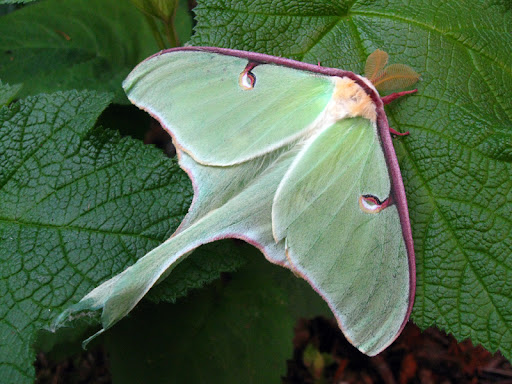 The site of the Smithwick was very much curated compared to the rest of the isle as it turns out, consisting of two open but flooded shafts sitting fenced off directly next to each other. There were interpretive signs here too. Smithwick Mine was started by James Smithwick in July 1843, pretty much right after the Ojibwe ceded the land, making it one of the oldest (of the white man’s mines, at least) in the state.


For two years…Cornelius G. Shaw and a small crew of miners worked Smithwick’s mine. They dug four shafts and built a blacksmith shop, root cellar, and several dwellings. The main shaft reached 96 feet deep. The upper 30 feet produced some copper, but lower down the vein “pinched out,” prompting Shaw to abandoned mining here.

It then went on to excerpt some of Shaw’s diary entries from 1847, illustrating the harshness and trials of life on Isle Royale in the 19th century:

Tuesday, June 22, “found a vein of copper…but was drove out of the woods by the black flies & was almost blind when I got home from their byte.”
Sunday, June 27, “Recd two letters from my wife all well…”
Thursday, July 8, “flies are leaving and musketoes take their place.”
Sunday, July 18, “…caught the largest trout I ever caught…”
Monday, July 19, “two men working…had a narrow escape by the explosion of a charge…that had misfired.”
Saturday, July 24, “I cut my foot on the great toe joint badly but managed to dress it myself by tearing my Shirt up for Bandages….”
Wednesday, August 25, “…have a tooth pulled out about 10 Oclk I was completely wild with pain….”

I didn’t take any pics since there was little left to see here. I went back and sat at the docks until it was time to leave. 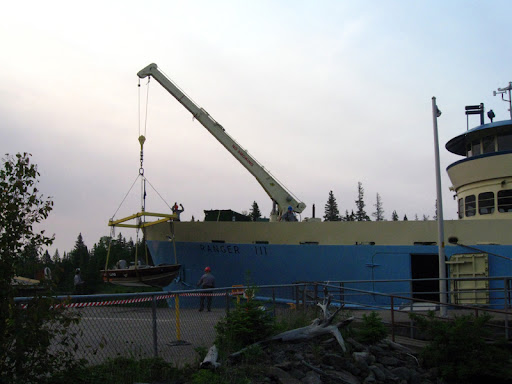 I was happy to be on board the Ranger III once more, on my way home. A rush of feelings coursed through me as I manned the railing and gazed out at the shores that I was slowly leaving behind. I was so glad to be leaving but I had come to love this place indescribably…or maybe more like an admiration or guarded respect perhaps, than an open love.

It was the respect that one privately feels the first time he finally finds a rival who he cannot beat. Isle Royale was the first place that I had set out with intent to conquer but instead was conquered myself. I vowed grimly to return. 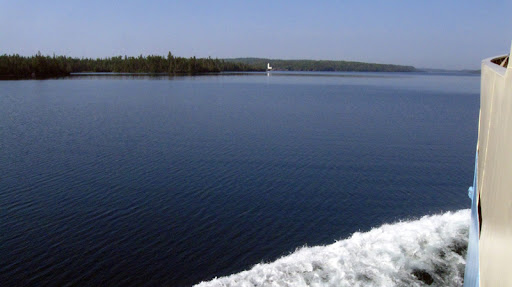 On our way toward the open waters we stopped for a supply drop at the park depot on Mott Island: 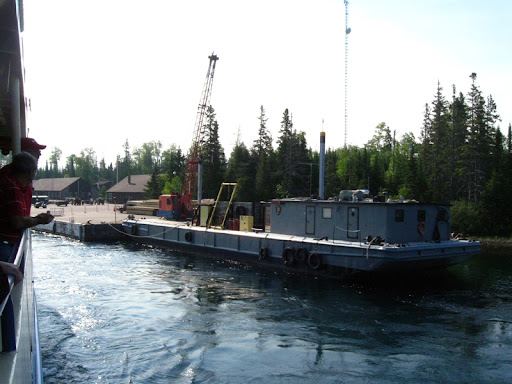 Underway once again, I spied the poor-rock pile of the Siskowit Mine on shore: 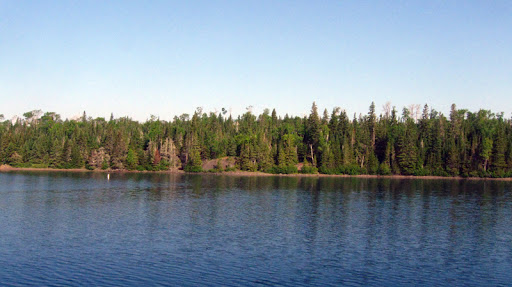 The morning had gone from hazy and gray to sunny. It looked like we were going to have a beautiful day for sailing. The report called for two-foot waves and clear skies. Over the immaculate waters of the harbor, we approached the Rock Harbor Light one last time before turning out into the waters of Superior: 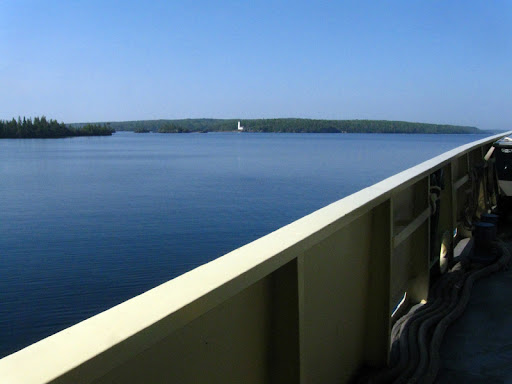 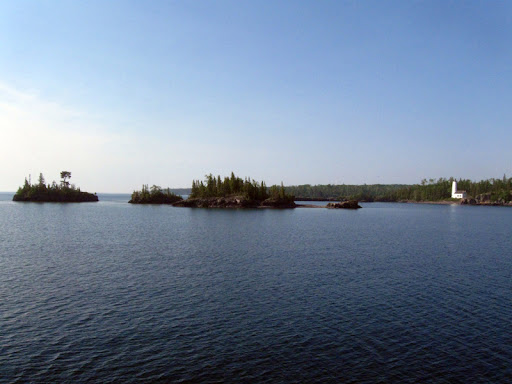 Once beyond the garrison of the protected harbor waters, the captain opened up the engines and we were sailing. 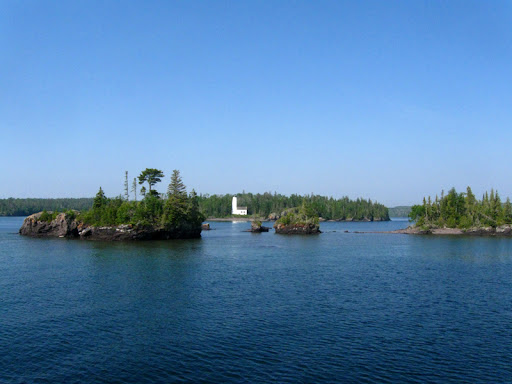 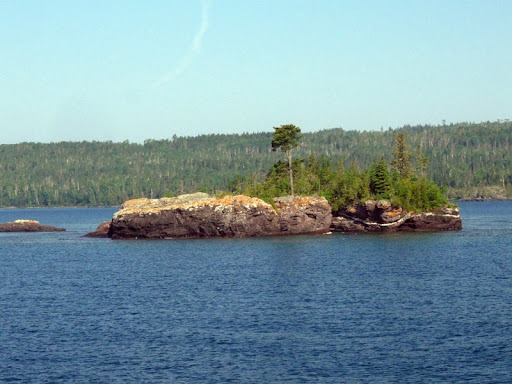 This was the very same spot where on Wednesday morning I had seen 12-foot waves slamming into the rocks, while standing in misery upon the crest of Mt. Ojibwe: 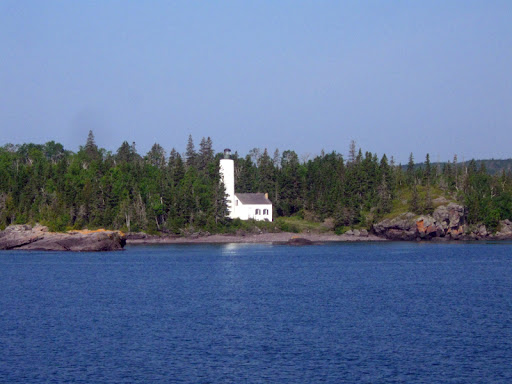 Out aft, I watched the lighthouse diminish into a white speck nestled in a prickly sea of green conifers. A slight haze hung over the forest: 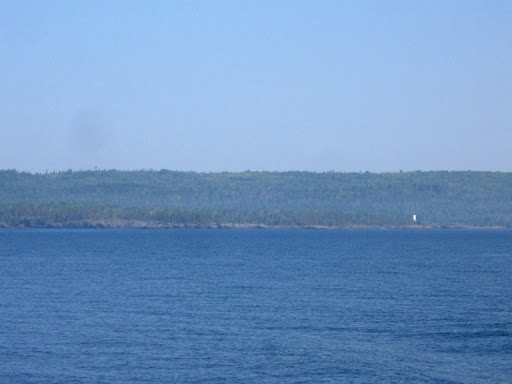 I kept watch off the starboard side as we cruised past Saginaw Point, eyeing the walls of the unpenetrated wilderness that I had originally thought about setting myself off into. I wondered what would have happened if I had gone that course. I squinted to study the coastline, to see if it looked navigable by foot, and indeed mostly what I saw were bare rock cliffs hemming the forest from the sea. Nonetheless I thought that perhaps conquest of this untamed sector of the isle might best be accomplished with a comrade, and a canoe. I looked for telltale poor-rock piles along the jagged coast, but saw none: 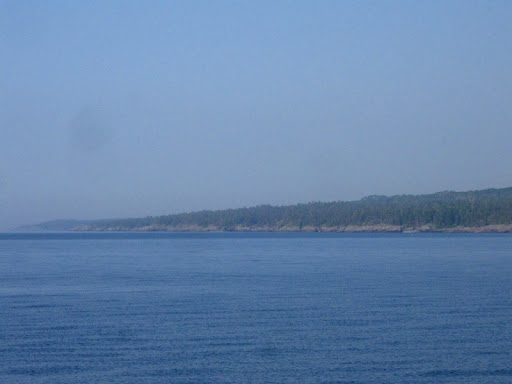 The mystical land mass that I had just come to know as Isle Royale began to recede back into the blue shroud of enwreathing mists from whence it came, to lie timelessly in wait for my eventual return. Out ahead was an undefined blur of blue-gray smudge, making it impossible to tell where sea stopped and sky began. 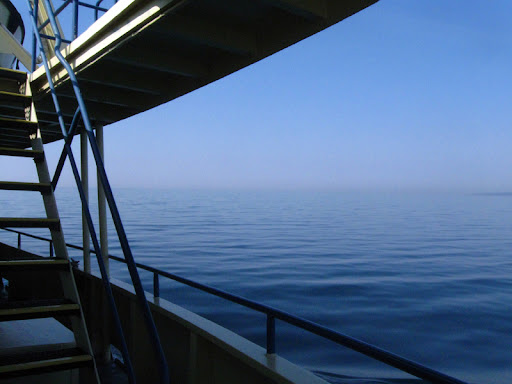 The waters were so calm today that it was like we were caught in a sargasso…as if there hadn’t already been enough eerie scenes on this trip: 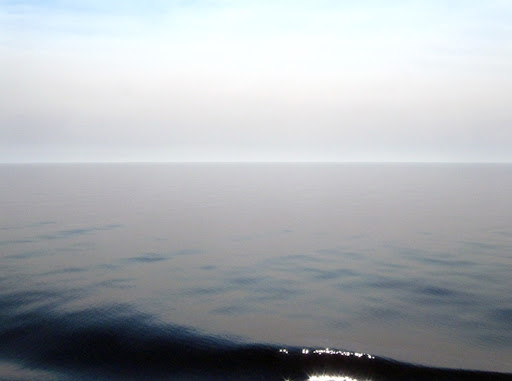 After awhile I suddenly thought I saw something tall and white just barely standing out from the murk on the extreme horizon, and realized that it was the ruins of Menagerie Island Light. Even at full-zoom on my camera, it was only the faintest sliver of white lost in a swirling miasma, but I knew that’s what it was: 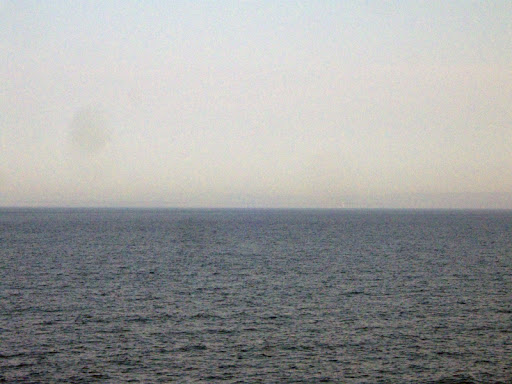 That’s all it could be. When it disappeared, I knew that now there’d be nothing left to look at out there for at least the next three hours when we would come within visual range of the Keweenaw. The boat ride this time was plane-smooth and almost mind numbing, like we were navigating on a starship through the heavens. 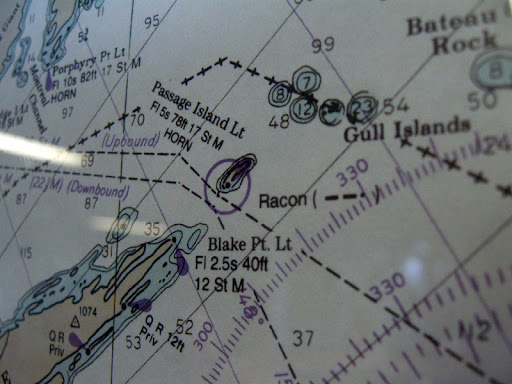 I began to get stir-crazy again and paced about the ship. Everyone else looked beat, and most found somewhere to nap. I sat and drank coffee at the snack bar, along with a much appreciated donut that I purchased with my last pocket change. It occurred to me that if I had bought Dramamine during the ride to the island, I would not have had quite enough to purchase these blessed rewards that I was currently cherishing. I gave myself an extra pat on the back for not being a pussy. I had not had caffeine in four days.

Well after we crossed the mid-point of the lake and entered the shipping lanes again, the airs cleared somewhat into something with more definition, and I spied the ghostly form of a freighter miraged on the horizon, still almost completely imperceptible: 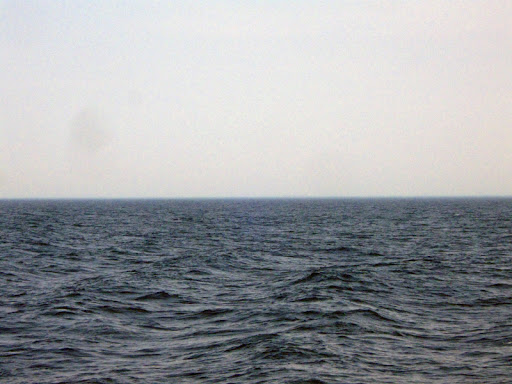 I became tired of walking around the ship and sat at a table to read a copy of the 2011 Greenstone, the official publication of Isle Royale National Park. A particular excerpt from an article about prehistoric mining caught my eye…“And while archaeological surveys of mining sites have been conducted at Isle Royale since the 1870s, many of the sites and associated habitation areas remain largely uninvestigated.” Wow…I whistled the Indiana Jones theme to myself briefly. What a place. 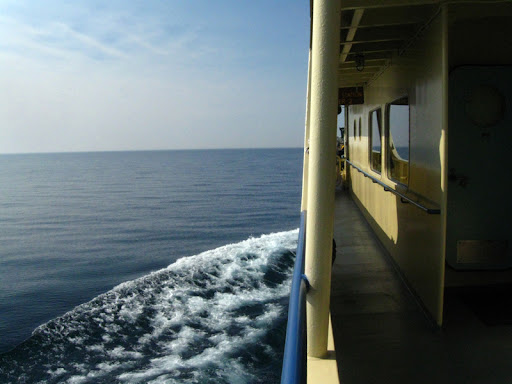 Now deeply rapt in contemplations of the ancient history and deepest secrets of the isle, I again unfolded my piece of scratch notepaper that I had been jotting thoughts down on for the whole trip, and began to brainstorm. Eventually I got so anxious on the long boat crossing that I began to painstakingly draw out the doodles that I showed in an earlier episode of this saga depicting the geologic development of Isle Royale.

Joseph Papineau, who I quoted heavily for my Norwich Mine series, always wondered why so many copper tools are found at ancient mining pits, and disagrees with the commonly foisted theory that they are merely lost tools dropped there by miners. He thinks that it holds little merit because any tradesman knows that a tradesman keeps track of his tools—especially if he laboriously made them himself—and would not be so careless as to lose as many as are found left behind at these sites. The amount of them that are typically found on archaeological digs makes it seem like one day the workers just dematerialized in the midst of their work, the tools falling from their hands, to be left there undisturbed for millennia—a very unlikely scenario.

Papineau argues that the only possible explanation is one of economics—the very same reasons that we abandon our mines. Simply, the market for copper changed on these ancient miners over time; at one time it was so plentiful they could afford to make all kinds of tools out of it, and when the demand slowed and work stopped, the people moved on to other places and occupations. Either that, or tribal warfare could have driven them suddenly from their native lands. Naturally, since they carried everything on their back and since copper is heavy, they only took with them what they could carry, and selected their best tools, leaving the rest behind intentionally at the work site. The ancient copper mining era lasted about 1,000 years and by some guesses extracted 1.5 billion pounds of the red metal, miskwaabik.

The first white men arrived on Lake Superior in the 1630s and found a few of the Huron tribe who were making trips to Isle Royale to get copper for their personal use, but the Ojibwe themselves knew little or nothing of copper mining, Papineau says. The first white attempt at mining Michigan copper he says was by Frenchman Denis de la Ronde in 1727, and the Englishman Alexander Henry tried in 1771. It was not until the Americans arrived in the 1840s that successful large-scale mining for trade returned to this land for the first time since the ancients had done it millennia before. And with the use of explosive, they removed more copper in 50 years than the ancients had in 1,000. Though the first wave of white mining on Isle Royale in the 1840s faded quickly, there was a resurgence of interest in the 1870s, which was when the isle organized itself as a county. The last mine closed in 1883. 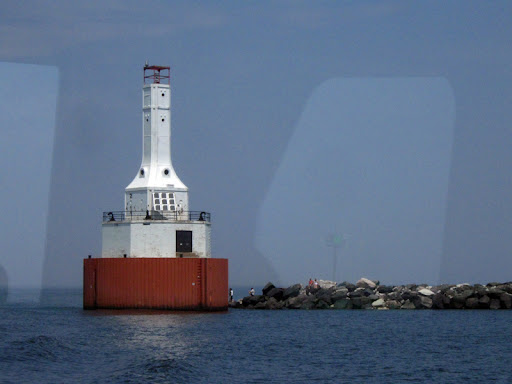 At long last we passed the markers for the Upper Portage Entrance, and I knew we were back in civilization. It was about another hour of sailing through this fjord-like inlet before we were passing under the Houghton Lift Bridge and coming in to port, precisely at 3pm. I wasted no time in getting back to my car (and finding my missing dry clothes, neatly folded in the backseat as suspected), before getting some lunch. The plan for the rest of today was to investigate a few more points of recent interest on the way home, mainly Silver Mountain and Sturgeon Gorge, and perhaps take another shot at finding the King Phillip Stamp Mill.

Silver Mountain was a very steep bluff, deep in the Ottawa National Forest that was pocked with a few old silver mines that--like the Norwich Hill--had lain largely untouched. Obviously I did not have the proper amount of time to conduct the kind of investigation that a locale of this caliber deserved, but I wanted to at least do a quick pre-expedition shakedown. This was another one that had come well-recommended by ROC, the guy who gave me the scoop on Norwich two years ago. Sturgeon Gorge is very nearby, sometimes called “The Grand Canyon of Michigan,” because it is one of the more scenic spots in the state. There are a few waterfalls in the vicinity too.

References:
Norwich Mine, An Historical Journey Across Time, by Joseph R. Papineau