At 3105 Carpenter, in a dense neighborhood on the Detroit-Hamtramck border, stands a complex of large mid-century hospital buildings, one of which has been abandoned for many years. The North Detroit General Hospital went bankrupt in 1993, but was reopened under the name "Greater Detroit Hospital" and continued operating until early 2000. It was reorganized as a non-profit, and also included a mental health component since there were currently no other mental health care centers still operating in Detroit.

Local historian Greg Kowalski writes that the land where the hospital stands had been previously occupied by the old Carpenter School, which closed in 1935 and was converted into a park. The land was later sold to build North Detroit General Hospital "in the 1970s."

A 1973 issue of Jet Magazine says that Melvin D. Jefferson, who started Superior Beauty & Barber Supply Co. and was Detroit's first black fire commissioner, also sat on the board of directors of North Detroit General Hospital.

A January 2003 article in the Metro Times by Curt Guyette explains how this hospital closed due to cuts to Medicaid and "the failure of Wayne County to pay its bills," as well as a host of other legal disputes regarding ownership of the hospital, and highly questionable financial practices. The hospital was poorly managed and seriously understaffed, resulting in a highly stressful workplace for the employees.

I also know through personal connections that there were other reasons for this hospital's closure, namely charges of mishandling medical waste that were brought to light when at least one nurse blew the whistle on their highly illegal practice of disposing of certain "residues" straight into the municipal sewer system. It would seem however that these allegations appeared relatively minor in the shadow of the other malfeasances that plagued Greater Detroit General.

In its "Best of Detroit 2002," the Metro Times facetiously named Greater Detroit Hospital as Detroit's "Best Vacant Hospital," and stated that it would soon be making its Hollywood debut in Eminem's upcoming movie 8 Mile. If you recall from the movie, this hospital was seen briefly in the scene where Eminem went to the E.R. after his buddy Cheddar Bob managed to accidentally shoot himself in the junk.

An article in the Hamtramck Star laments that by 2006 the hospital had finally been breached by scrappers after having remained so well sealed for so long. Being nestled in a dense, high-traffic area made this an especially risky one to attempt busting into, but after that first door was cranked open it seemed like the jackals moved in quickly to devour.

I was fortunate enough to get in there in the very beginning before everything was looted. It also turns out that not long after our visit, the place became a de facto heroin junkie commune.

"Over the winter," the Hamtramck Star reported, "the neighborhood cannibals kept everyone within earshot awake, night after night, though the police would not arrest trespassers because they claimed there was no property owner."

What we found on our visit (mere days after the hospital was first breached) included fully stocked operating rooms, offices, and laboratories.

Look at all that unbroken glass:

I think this is one of those machines that goes "BING!":

There were of course plenty of patient rooms as well:

As mentioned earlier there was a mental health services component to this hospital, as evidenced by the presence of this hardened seclusion room:

There was just glassware everywhere we looked:

Some sort of headgear with wires coming out of it (left), and data backup discs (right):

We could hear the sounds of at least one scrapper or looter operating elsewhere on this floor of the building.

Tri-lingual signage means we are definitely in Hamtramck:

Then we started finding all these unused packages of Lidocaine...there were seriously a lot of them:

Suddenly the mission had taken an unexpected turn...

We couldn't believe our eyes...there was enough medical grade laughing gas in here to knock out an entire warehouse full of rave kids; the black market value of all the full cylinders we found in there was nearly incalculable. Clearly we had to do something to make sure this potentially hazardous substance was disposed of properly, so that it did not fall into the wrong hands. 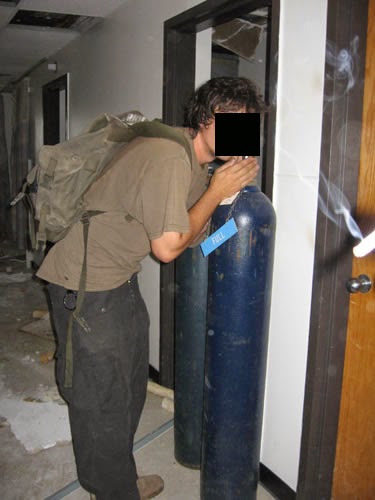 Ummm, nothing to see here... 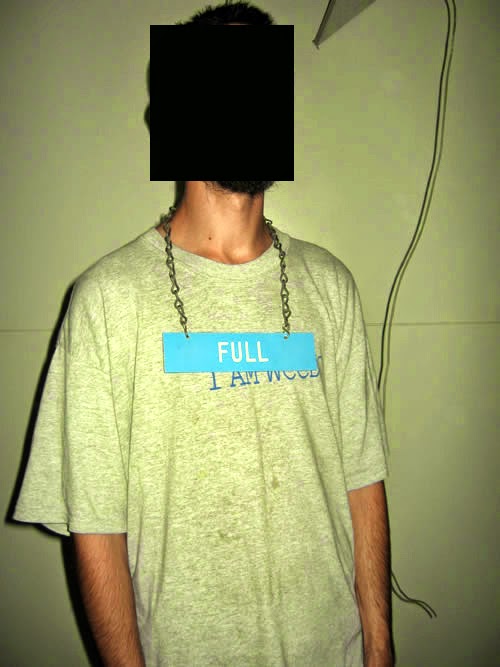 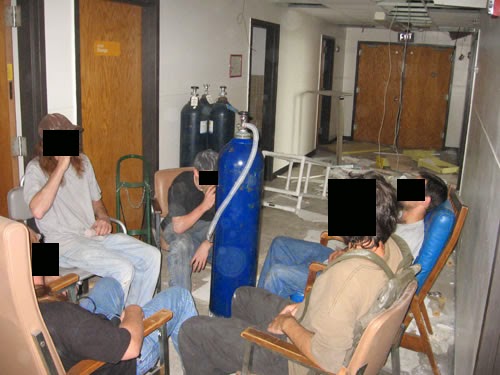 Finally, by October 2007 the community succeeded in getting the building resealed, and another renovation was underway.