I always found the old storefronts of Michigan Avenue particularly cool, and the one with the "witch-hat" turret overlooking the corner of 23rd Street was a standout. 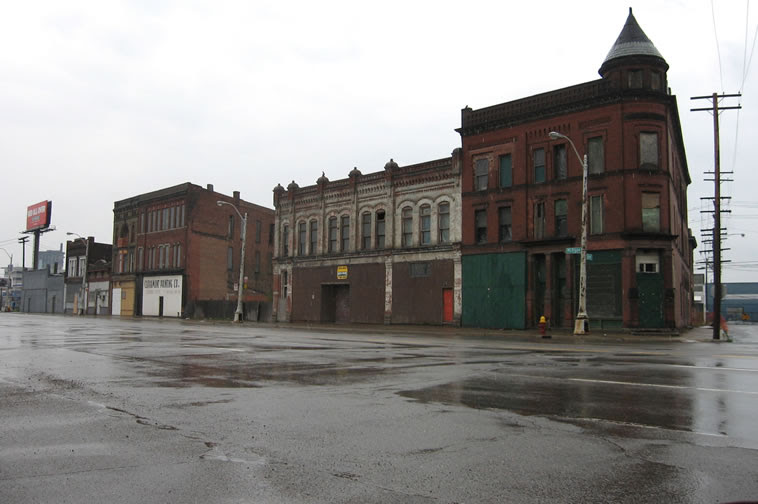 The whole block had been sliding into oblivion for many years, but it looked for a moment like someone was trying to renovate this one. Sadly, that effort didn't get beyond the gutting and reframing new interior walls stage before it died out. It was also bombed with a bunch of those "IT DON'T EXIST" tags that were splashed all over this stretch of the west side around that time, presumably as a statement about the pervasive blight and our jaded collective reaction to it. 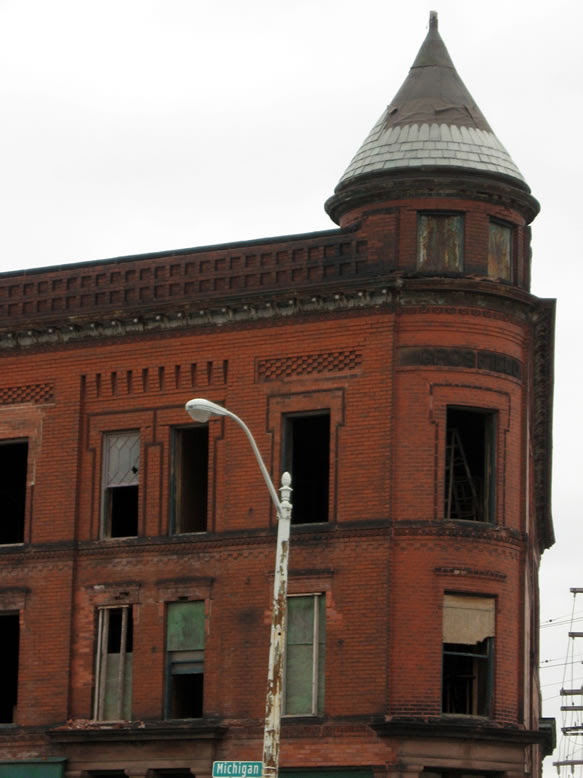 On a carved sandstone tablet high above the corner entrance, reads the name "GROSFIELD." 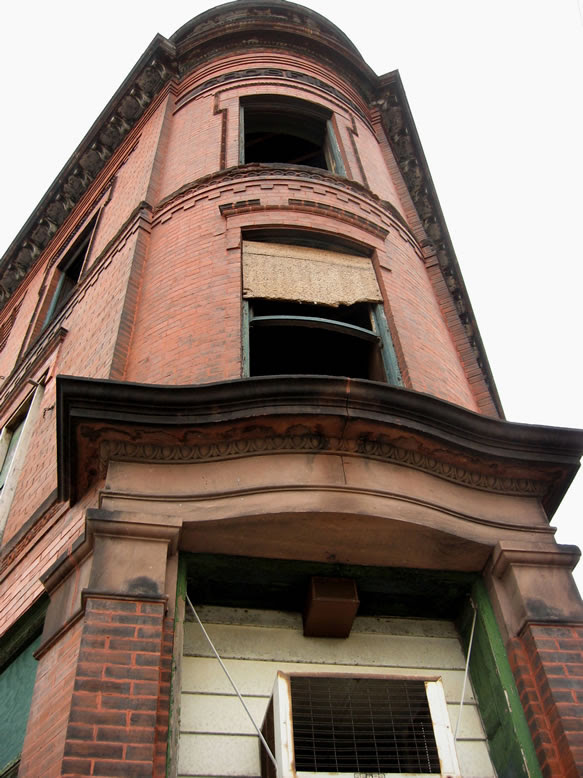 According to Detroit historian Clarence M. Burton, this structure was the business venture of Anthony Grosfield, a German immigrant who came here from Westphalia just in time for the American Civil War. He ended up in Cold Spring, New York, where he worked for the U.S. Ordnance Dept. at the West Point Foundry. Grosfield later made his way westward and settled in Detroit by 1866, where he got a job working for Patrick McMahon, a grocer at the southeast corner of Michigan Avenue and 23rd Street. 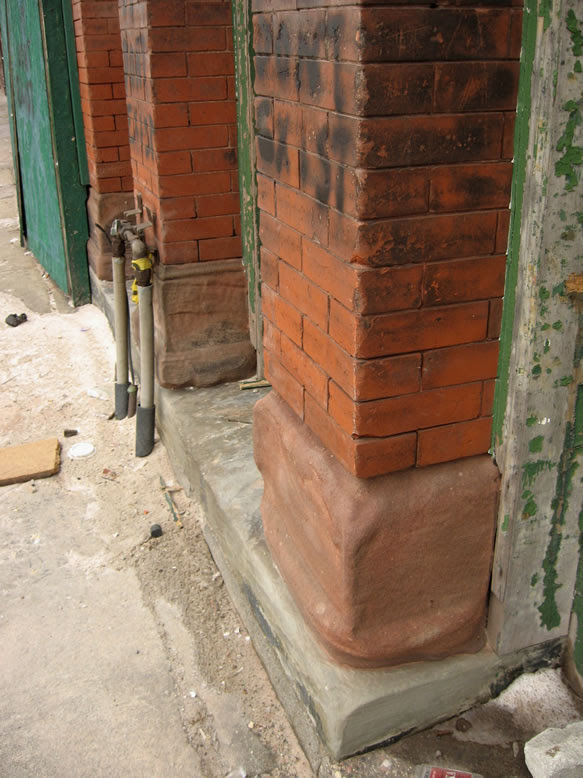 Soon Mr. Grosfield had enough money to send for his parents from Germany, and partnered with his father to buy out McMahon's grocery business and operate it as Grosfield & Co. In 1871 he was able to purchase the land as well, and in 1882 began switching from dealing in groceries to dealing in hardware. 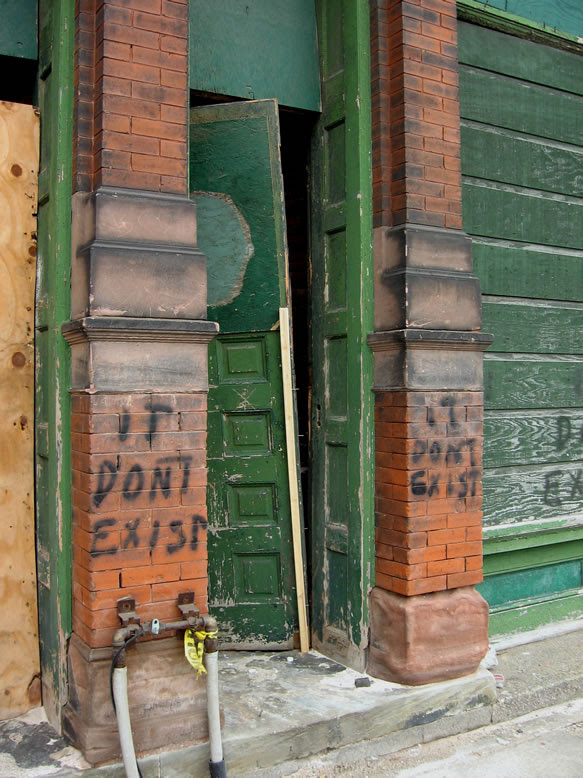 In 1887 he sold off his mercantile interests to get into the real estate and insurance business. Partnering with Peter Schulte, Grosfield began buying up land on the outskirts of the city, and eventually sold a very large tract to the city for the right-of-way to build the new segment of West Grand Boulevard from Michigan Avenue south to the Michigan Central RR tracks--an $80,000 piece of property. 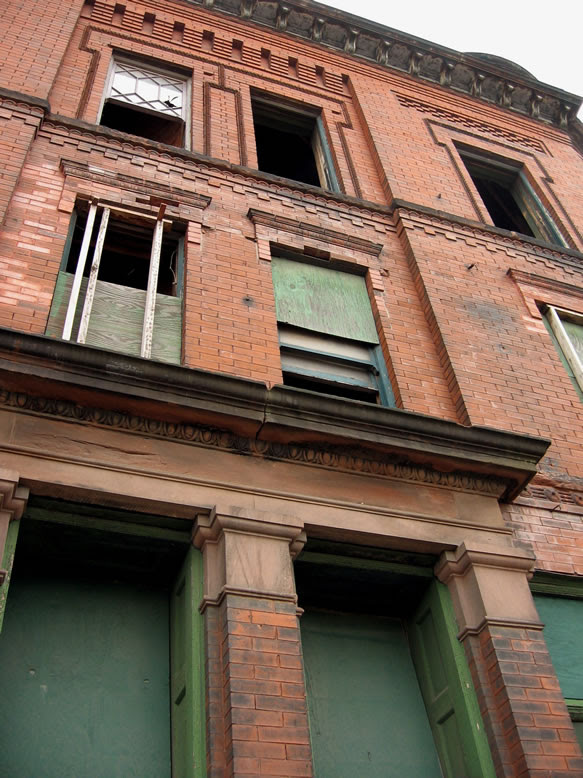 Mr. Grosfield built this present building in 1893 to replace the old McMahon grocery, and it continued to serve him and his sons, who subsequently got into the family business, as their offices. In 1905, Burton writes, Mr. Grosfield built a new family home at 819 West Grand Boulevard. Grosfield, "a staunch democrat," was elected as alderman to the old ninth ward, "in the days when it was considered an honor..."

When I snuck in there, the steps and floors were covered in a fine mixture of wind-blown snow and sawdust from the recent attempt at renovation. 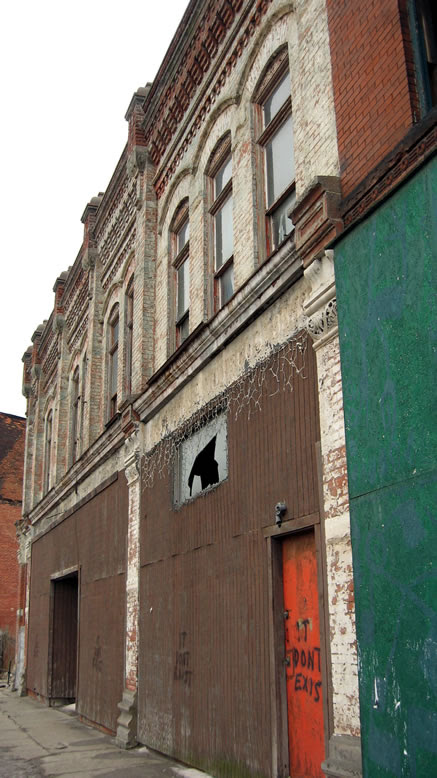 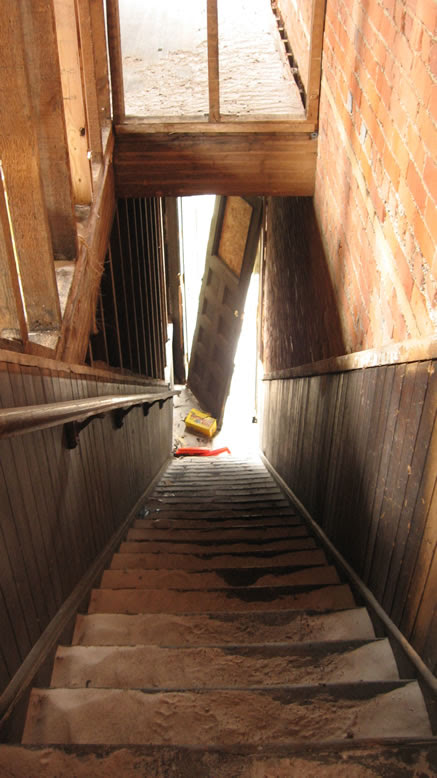 The lighter-colored brick building next-door was built in 1887 as the Charles Reeber & Brothers Dry Goods, designed by Peter Dederichs. 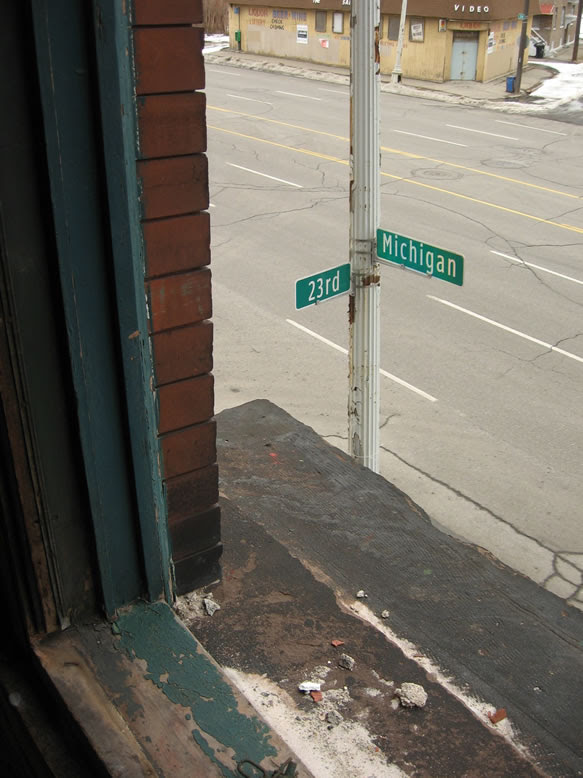 The corner turret was nothing special from inside; just a rounded corner of the building. Kind of a let-down. 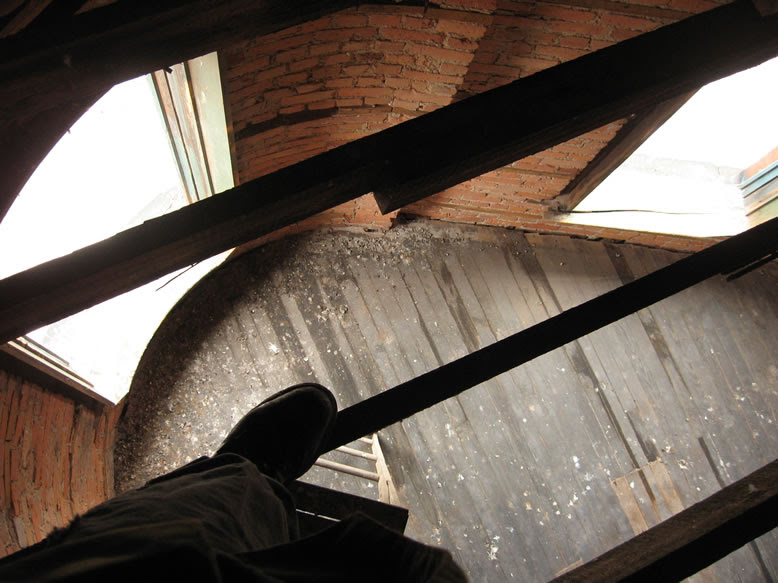 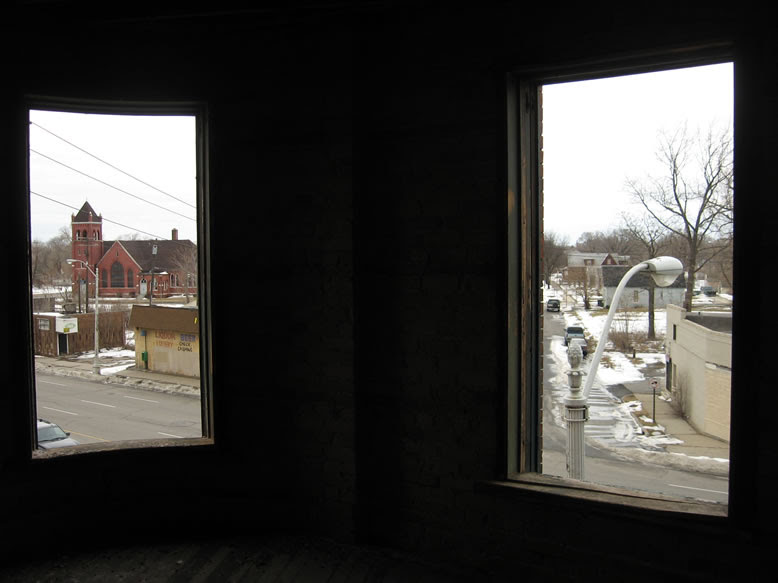 On the horizon you can see the top of the C.F. Smith warehouses sticking up: 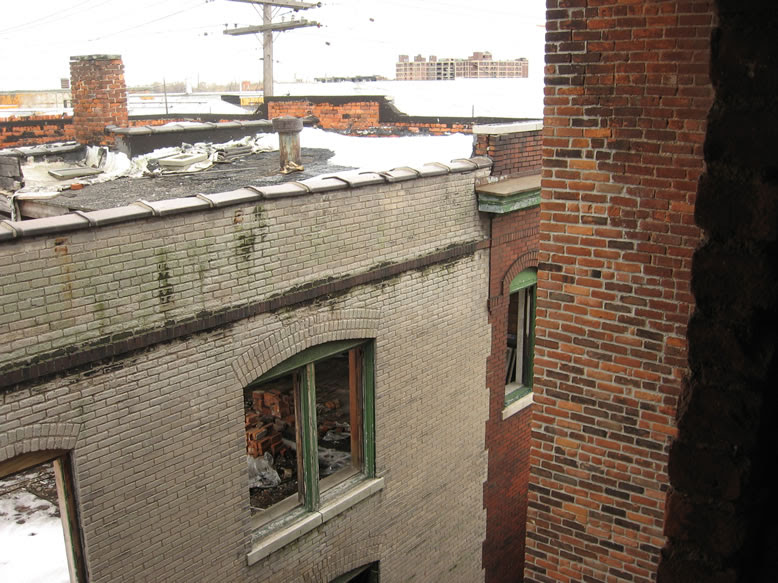 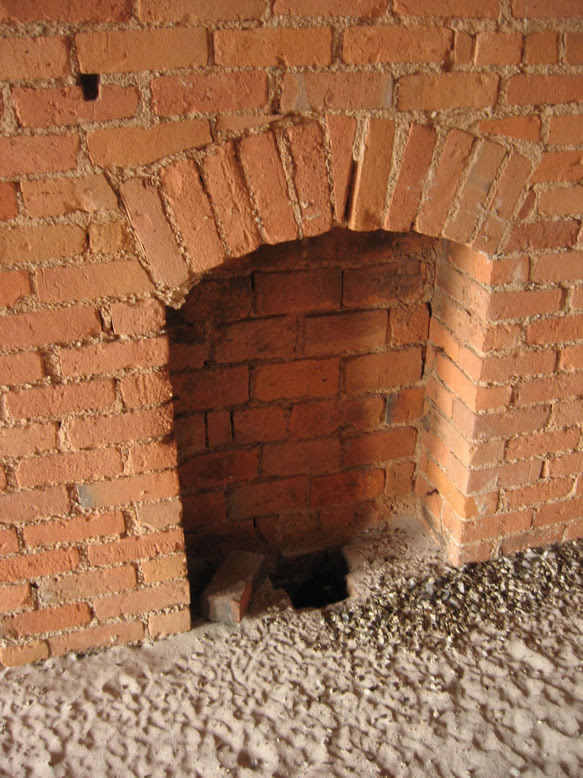 Looks like they were planning on doing apartments in here: 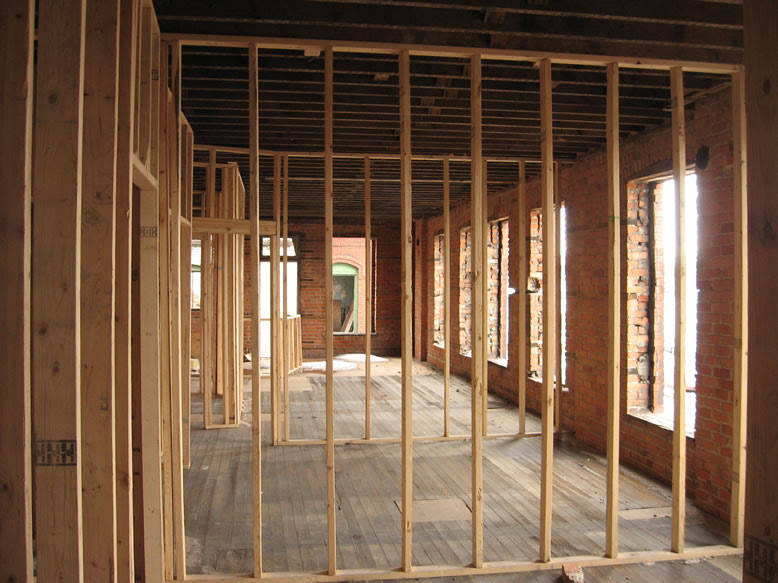 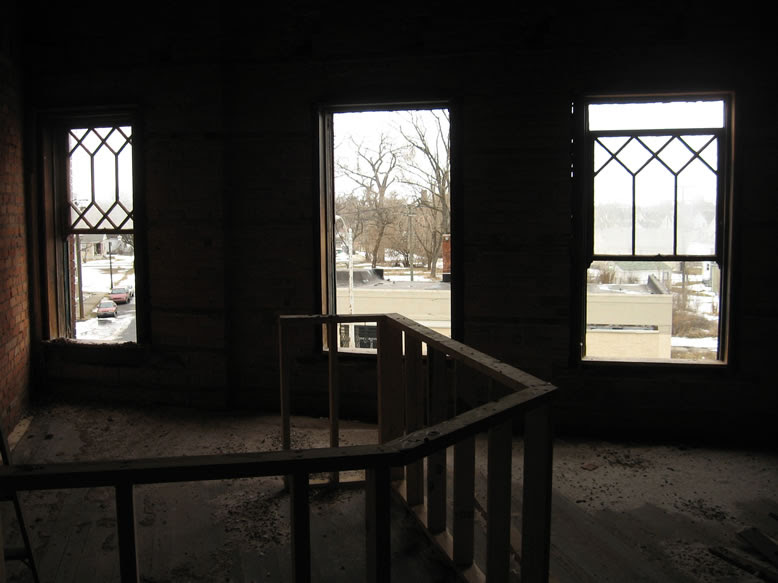 Original wooden-muntin windows from over 100 years ago, wow: 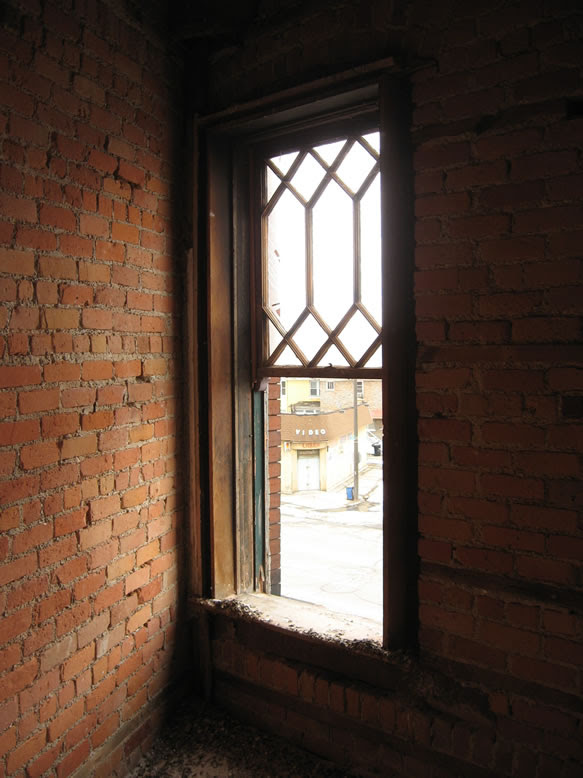 I am sure that they will get ripped out and thrown in a dumpster however, in favor of some cheesy fiberglass bullshit that will last 10 years. Apparently some people think that replacing an entire window every few years is easier than trying to mess with glazing or paint. 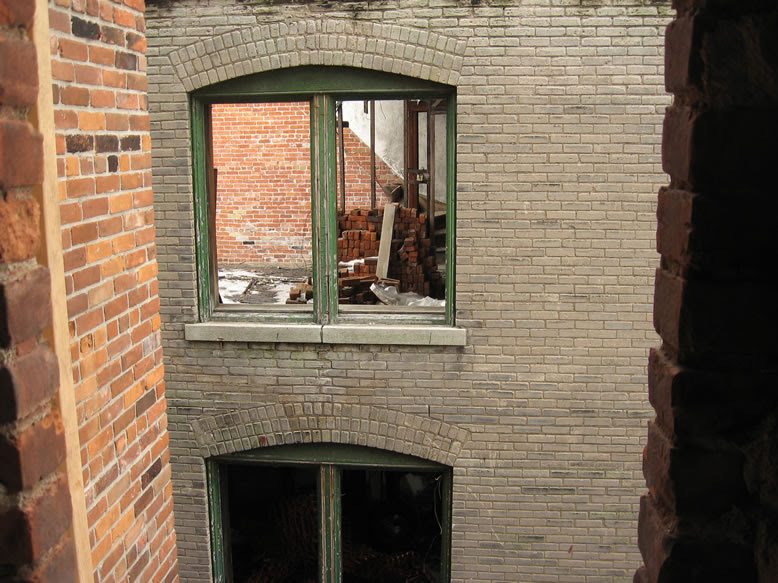 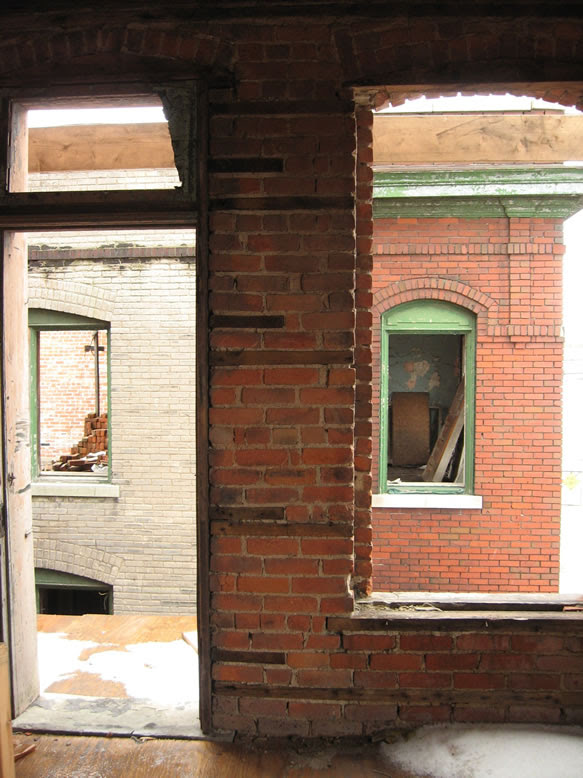 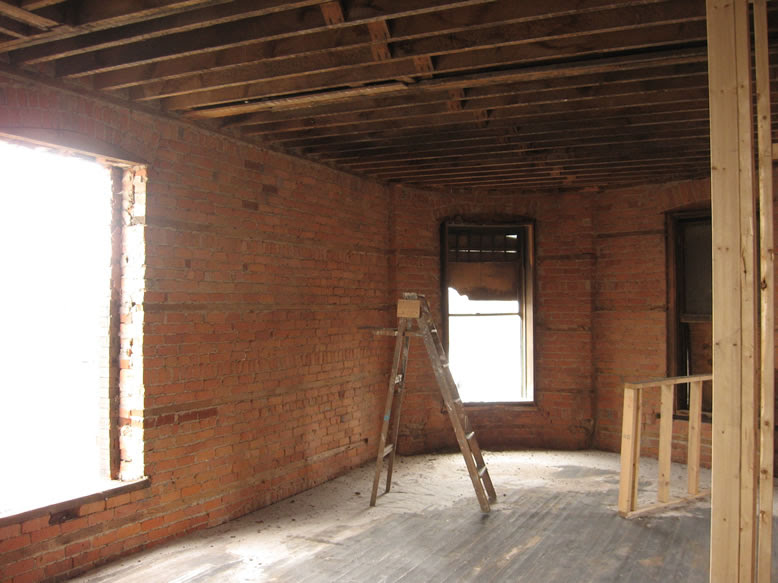 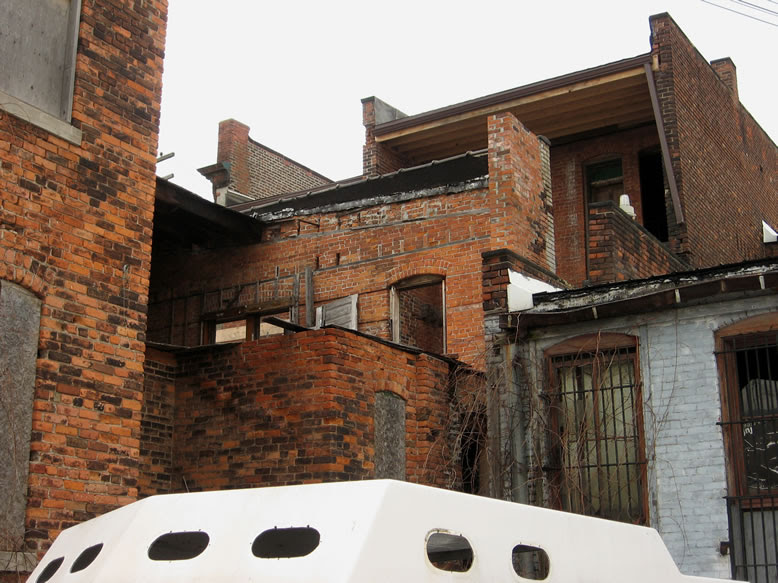 Of course there was an abandoned boat out back. 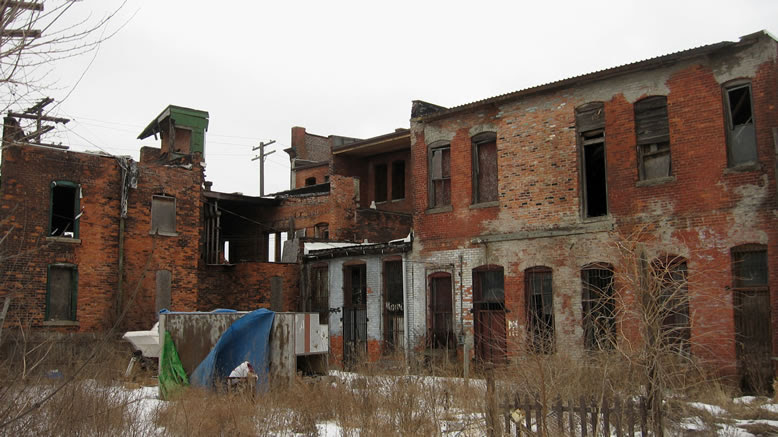 On the bright side, I think I have heard rumblings that the renovation of the Grosfield Block may have restarted, so hopefully it will be around a bit longer, even if it does have cheesy modern windows.

Update: As of March 2017, a large portion of the rear wall of the building has collapsed, and demolition may be imminent.