Looming over the Davison Expressway at Hamilton is the hulk of the former Willard Elementary School, more recently known as the Highland Park Bright Center for Adult Education. Hamilton goes down in my mind as one of the absolute most devastated avenues in the entire county. 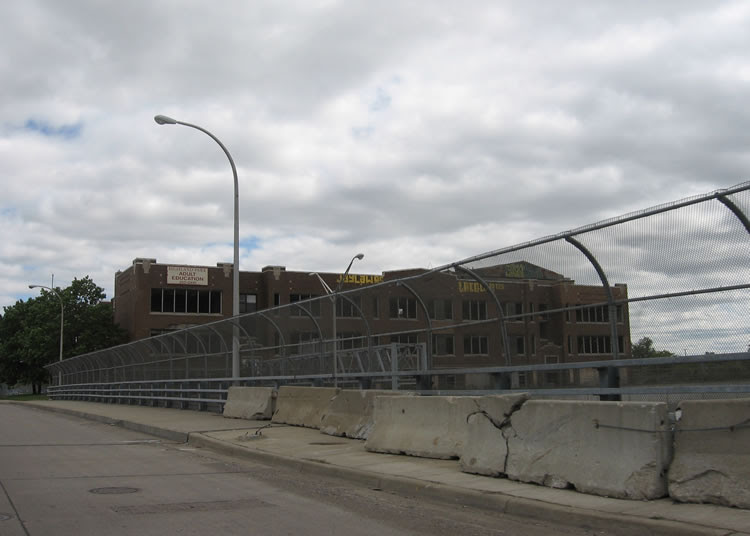 Willard School was constructed in stages starting in the mid-1910s, as far as I can tell (the school does not appear on the 1910 Sanborn map). The architect, according to a 1916 volume of Electrical World was Wells D. Butterfield, who also designed Highland Park High School, Ferris School, and the Cymbre Building in Corktown, as well as many local churches. 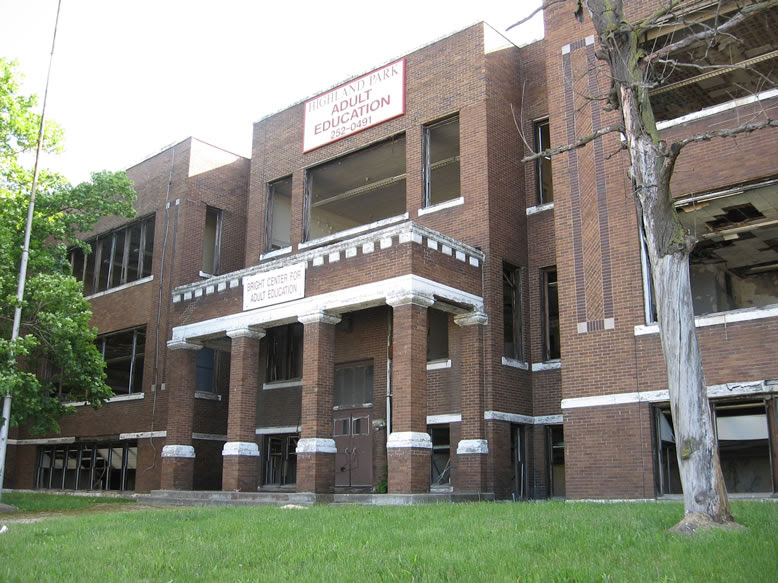 A copy of an old journal from 1919 called The Industrial Arts Magazine indicates that Parents Day was held on May 28th, the art and "industrial-arts" departments of the school held a "Red Cross bazaar" where items made by the children were put on display and for sale. The items included rugs, towels, aprons, breadboards, and toys. 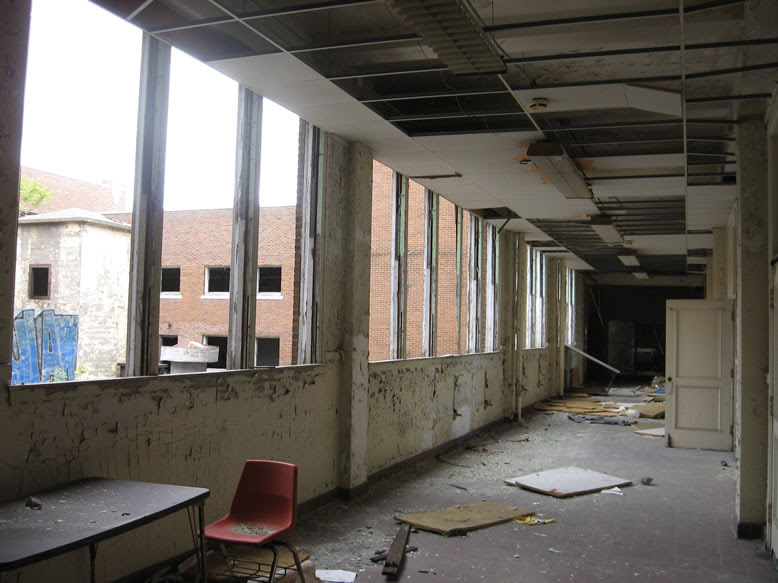 Clarence Burton writes in The City of Detroit, 1701-1922 that the principal of Willard School at that time, Edgar F. Down, was also simultaneously in his second term as the mayor of Highland Park, and that his popularity was "indisputable."

As principal however he attracted nationwide attention Burton says, by introducing "new ideas and plans in education." Willard was the largest grade school in Highland Park at the time, and boasted an enrollment of 1,400 pupils during those flush years when the Ford Model-T Plant was the very hive of Detroit industry. 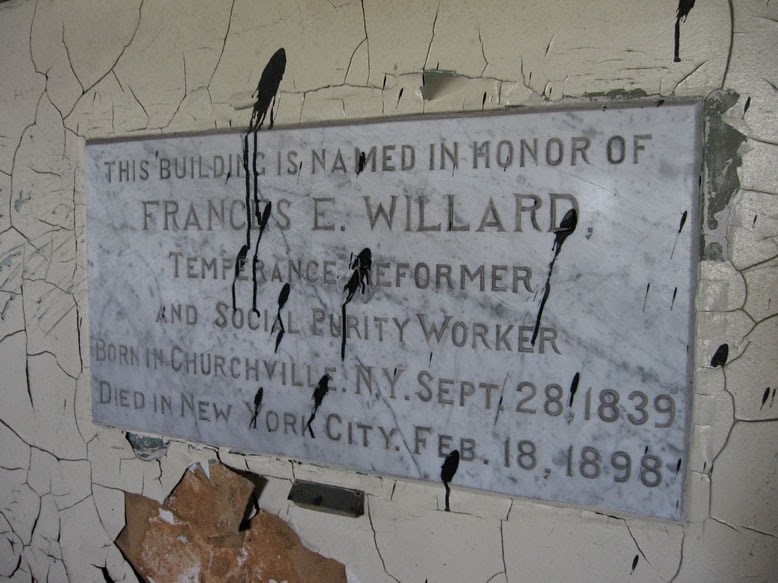 Mr. Down was born and educated in rural Onondaga County, New York, and began teaching there and in New Jersey, where he was principal of a school. Down came to Highland Park in 1912 to be principal of the Willard School where he began studying its methods with an eye to make improvements, while working toward his bachelor's degree at University of Michigan (which he received in 1917). 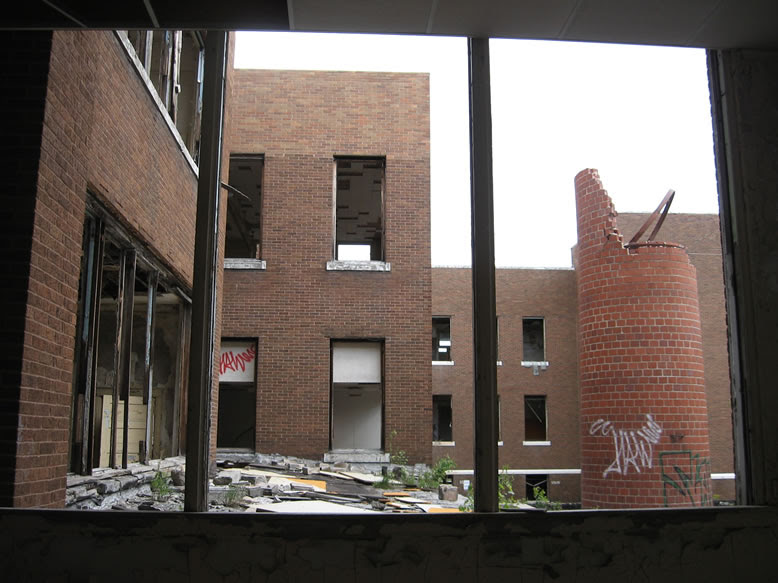 Principal Down came up with the idea of "alternating activities" in the school, similar to a concept that became commonly known as the "Platoon System" in schools across the country. Down's "greatest contribution," Burton says, was the plan of establishing "Unit Rooms" for primary grades. 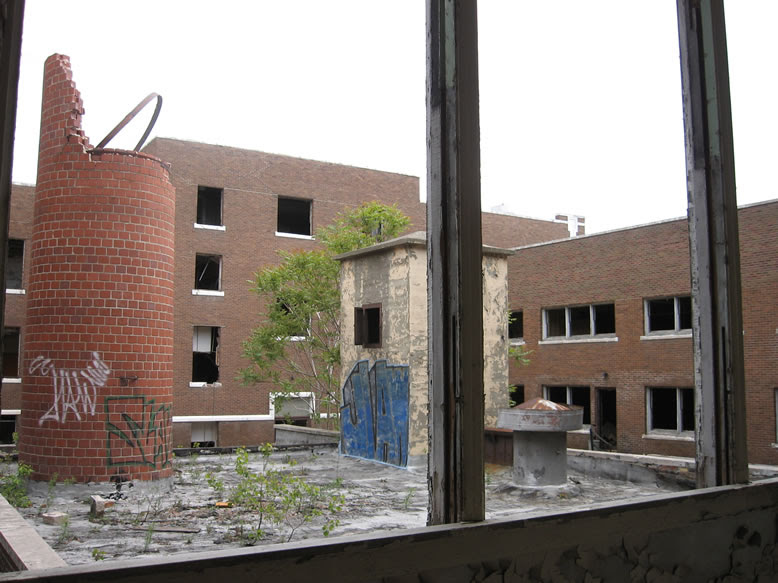 An educational journal from 1921 published by the University of Chicago talks of how the Highland Park school system took steps in the direction of "a closer amalgamation" of kindergarten and first grade at Willard School. This was Mr. Down's "Unit Room" plan that Burton described.

The two large neighboring classrooms that housed the kindergarten and the first graders were reconstructed so as to form one large room, called the "problem or work room." At each end of this large room were two smaller classrooms for the respective classes...it sounds as if the kindergarten and first grade were undergoing a sort of reverse mitosis. 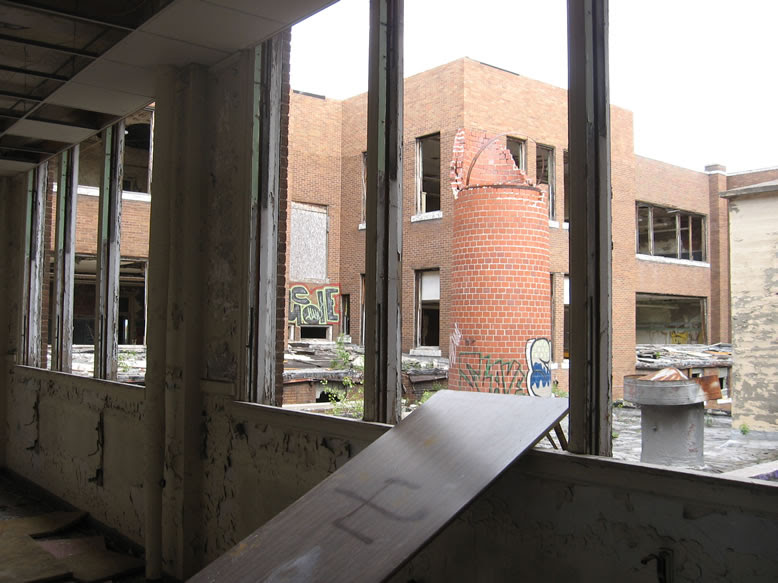 Between the two grades there were 80 children, and 40 of them would all meet in this common room during the times that their classes would normally have been doing "busy work," and engage in construction problems under the guidance of a special teacher.

Meanwhile, in the two small classrooms on the sides, regular teachers would be conducting standard academic lessons to the remaining pupils, and there was an effort to correlate the lessons of all three of these teachers, as well as to keep pupils grouped together with peers of similar mental status and development. The aim of the room, according to Miss Myrrl Hight (a teacher, I presume), was to develop self-expression and to broaden the pupil's experience in the uses of materials. 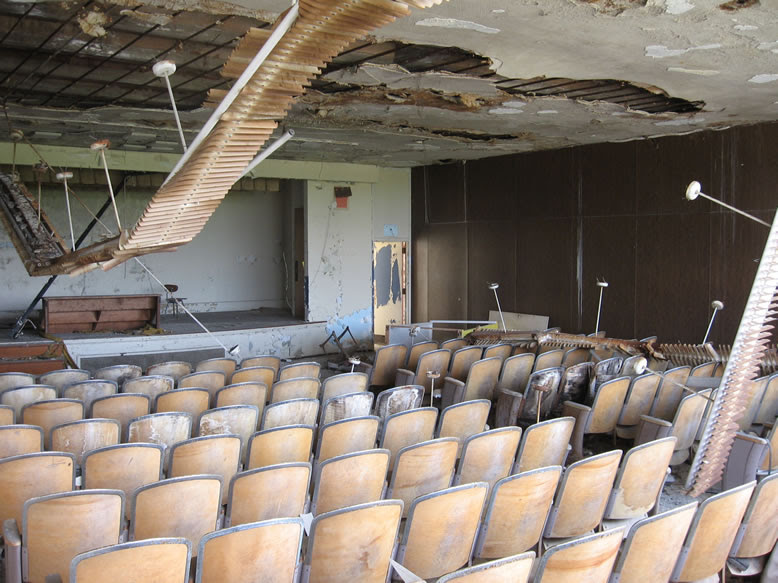 The whole concept is laid out in full detail (even with photos) in a pamphlet published by Principal Down himself, called The Highland Park Plan, Or Unit Rooms for the Use of Primary Grades. In it he explains that the idea is to get children away from the traditional classroom "busy work" and to get them thinking in terms of working on projects, or on problem solving.

By breaking the kids up into groups and having them move about during the day keeps them from remaining stagnant, which in turn helps them focus. Furthermore, the reduced sizes of the formal classrooms (rotating 20, instead of 40 all day) allows the teachers to give more focused, personalized instruction, with less chance of disruption. 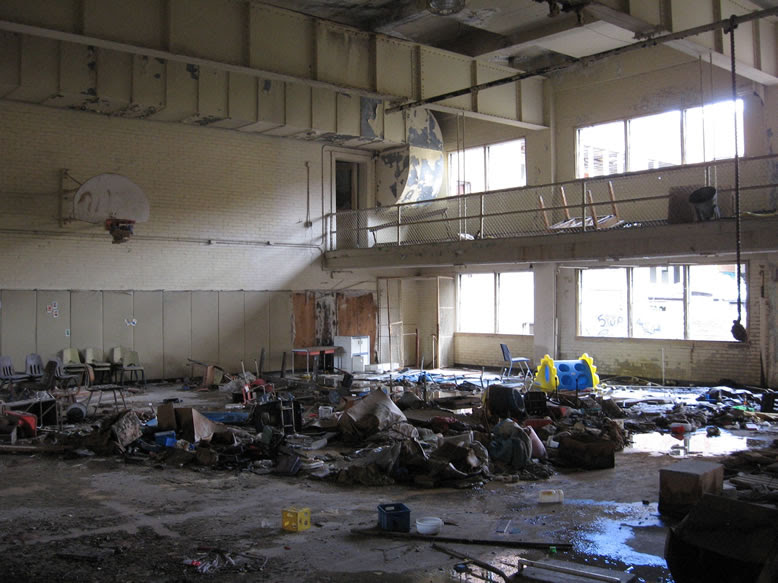 The Highland Park "Unit Room" system was Principal Down's tweak on the aforementioned "Platoon System," also known as the "Gary Plan," which was developed in 1907 by William Wirt, the superintendent of schools in Gary, Indiana. 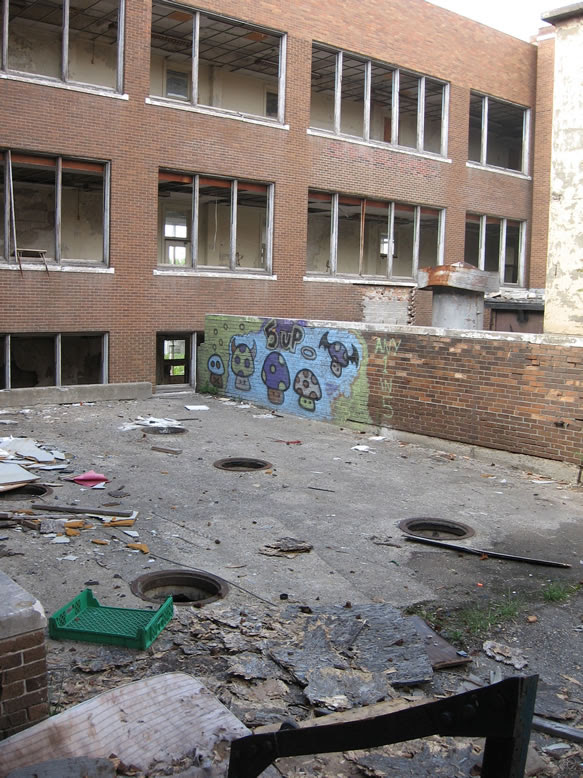 Encyclopedia Britannica defines the Gary Plan as a progressive form of education that broke from the stodgy nineteenth century model by functioning on a "work-study-play" format as opposed to standard "readin'-writin'-'rithmatic." It departmentalized school subjects, which were expanded to include the arts, shop classes, and phys.-ed.

The Gary Plan thus resulted in the idea of moving student groups (platoons) around to the different classrooms within a school building, and it transfigured the American educational system for the entire 20th century. In other words, it is the system that all of us grew up with. 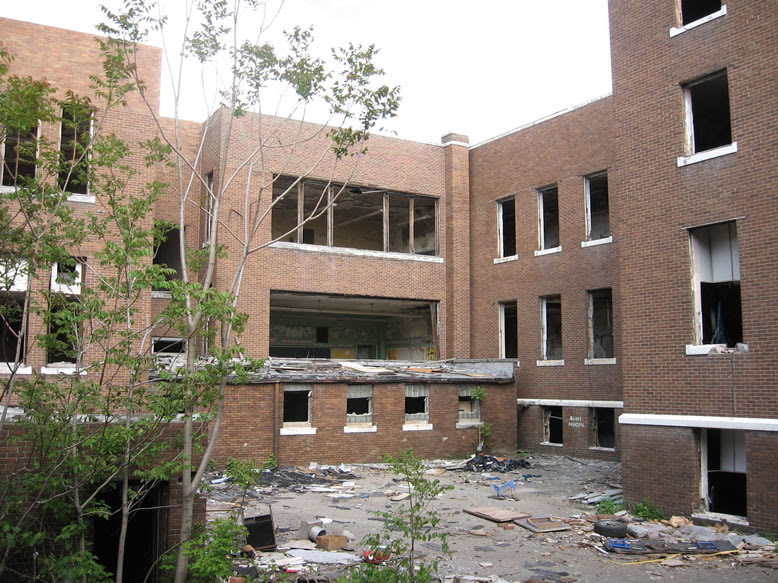 The Michigan Alumnus of February 1947 records that Mr. Down had relocated to Royal Oak and was recently elected to the Michigan State Senate. Apparently after moving on from Willard School he became the superintendent of Ferndale-Pleasant Ridge Schools in 1925.

During his time in Highland Park Down also served on the city's charter commission, on the Wayne County Board of Supervisors for four years, and as the president of the Michigan Education Association from 1944 to 1945. 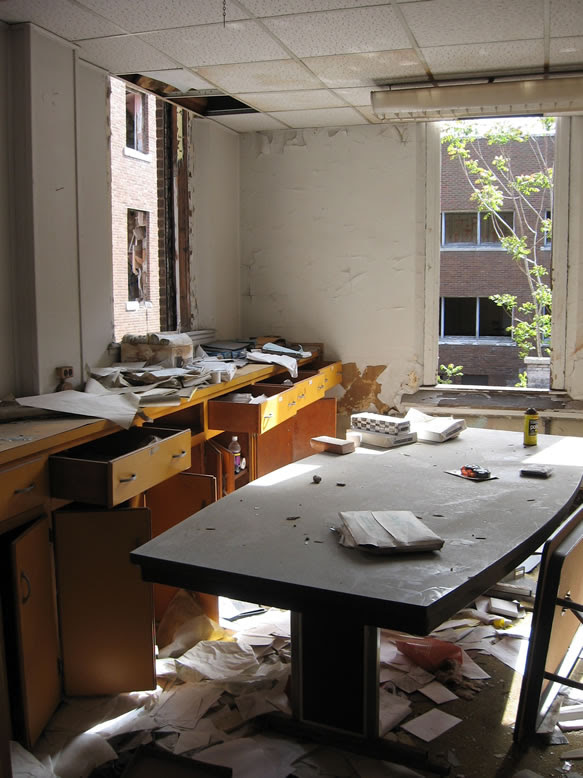 As mentioned earlier, Willard School closed down at some point in the 1980s or 1990s and became the Highland Park Bright Center for Adult Education. 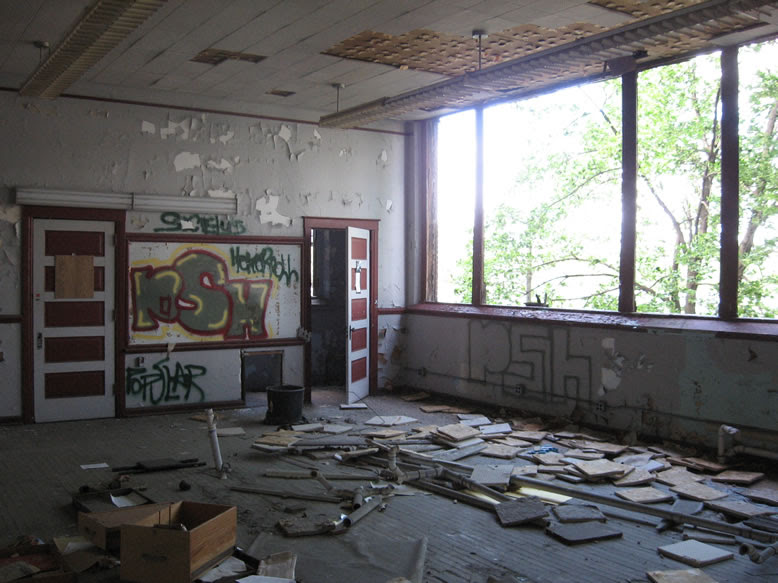 And here's that now-famous before / after photo that was stapled to the bulletin board in one classroom: 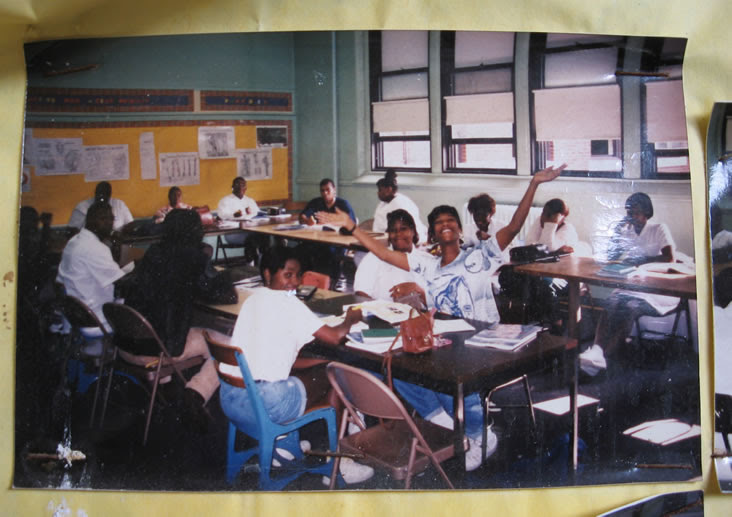 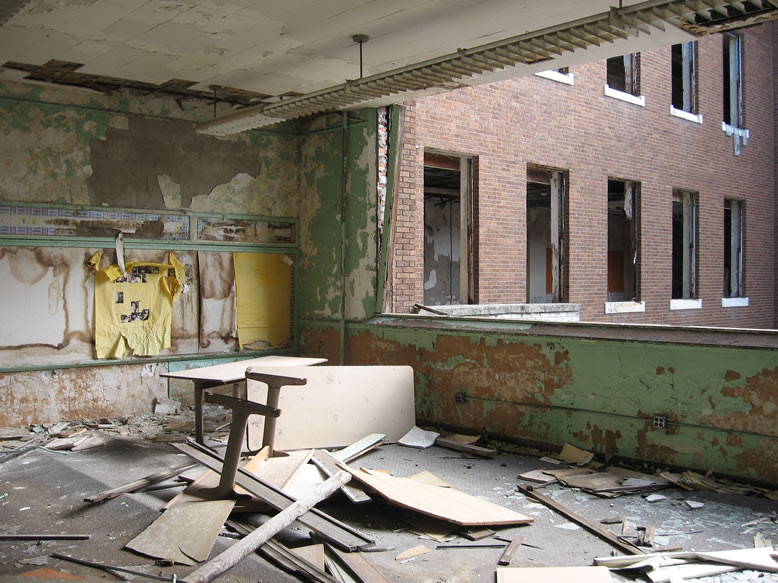 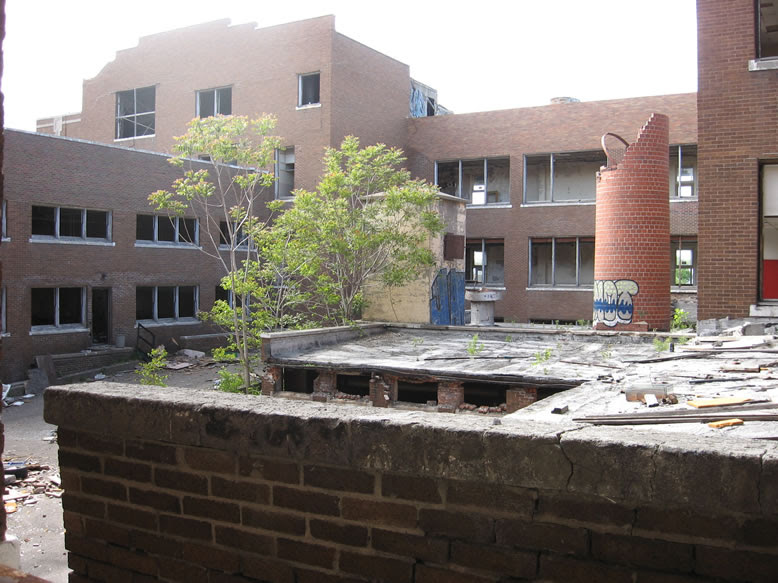 You don't often see concrete stairways like this in schools, usually factories: 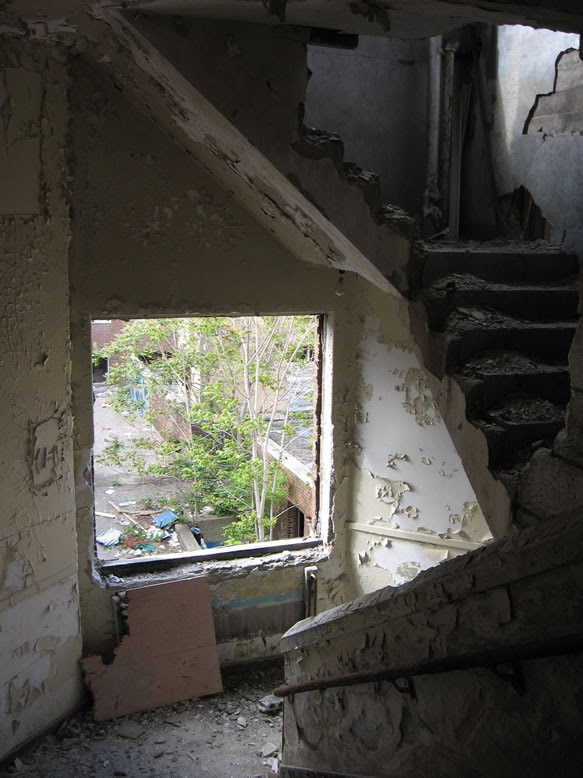 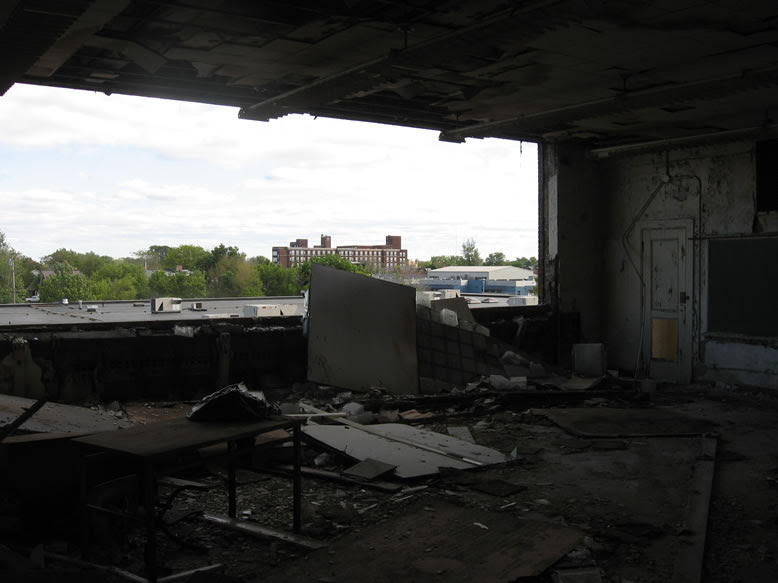 Perhaps one of the most depressing (and ubiquitous) things about exploring abandoned schools are the "farewell" messages commonly left on the chalkboards on whatever day was the final day of class before the school was shut down, still visible after all this time: 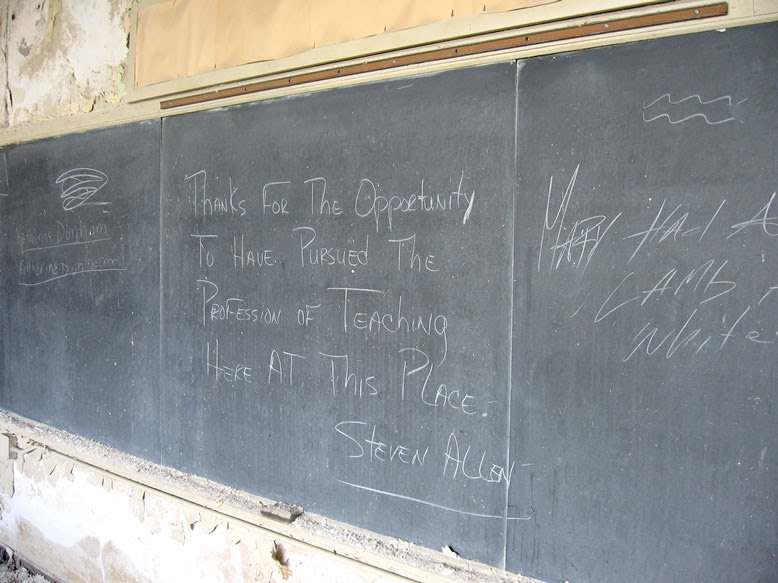 Even to the most battle-hardened and jaded tourist of Detroit's abandoned places, these personalized memento-moris must pull at the heartstrings at least a little bit. 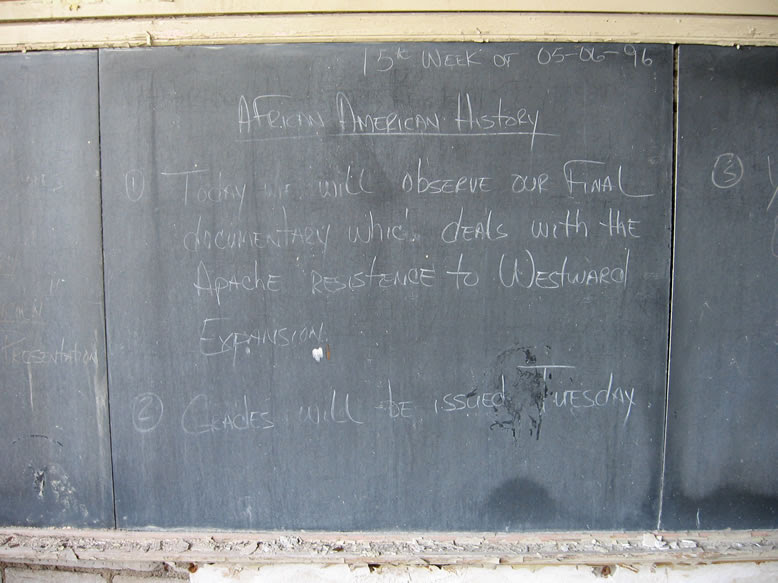 Then again, there are always the comedic geniuses that come along later, keeping things light-hearted: 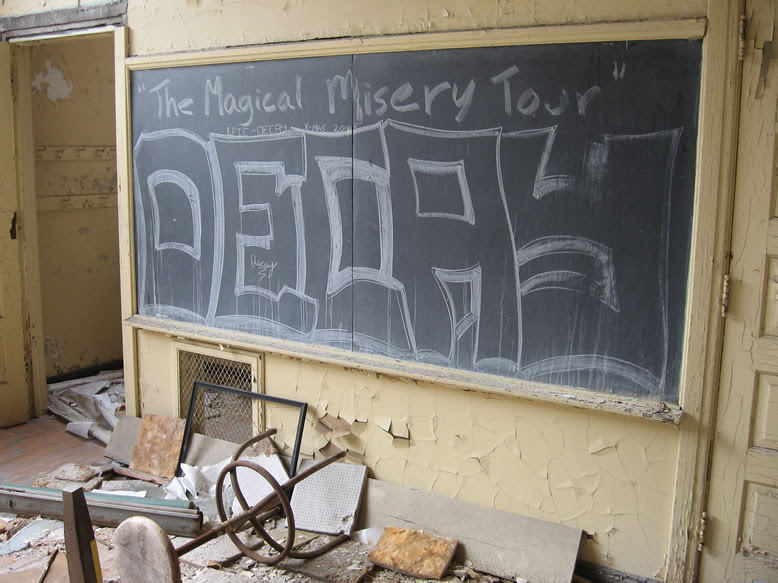 Interesting how the plaster melted away here to reveal old exterior brick...I get the feeling this school was added-onto a few times: 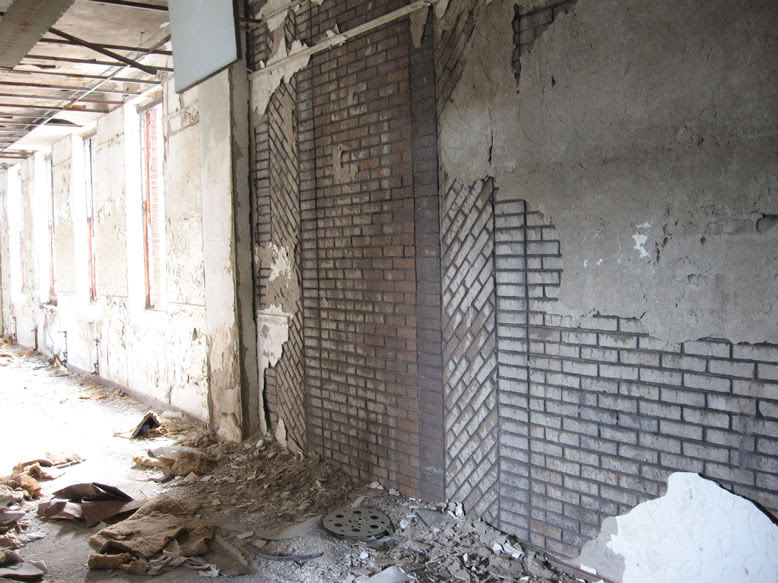 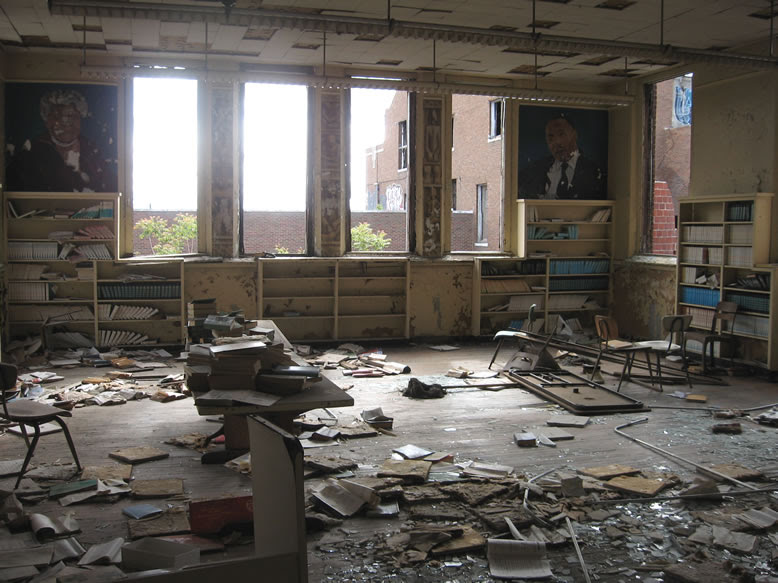 You can see by the different window dimensions what parts of the building were added at different times...the smaller, more spaced out windows were undoubtedly the older sections, I would assume: 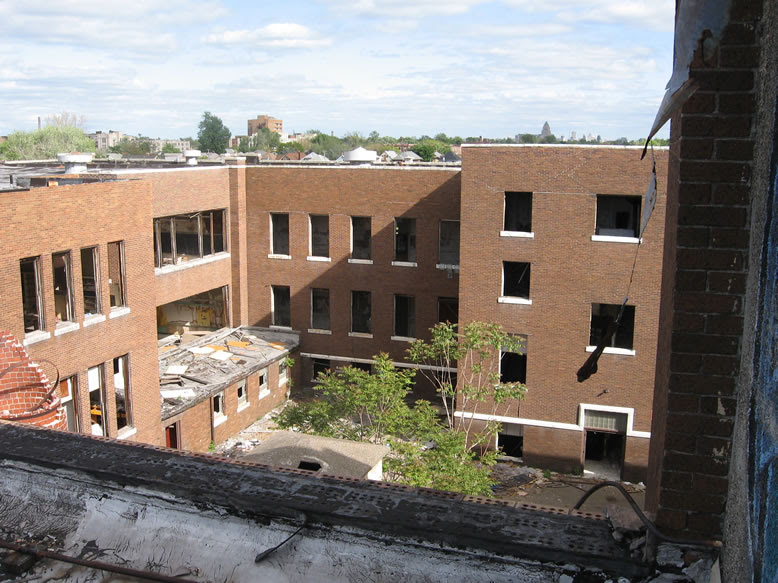 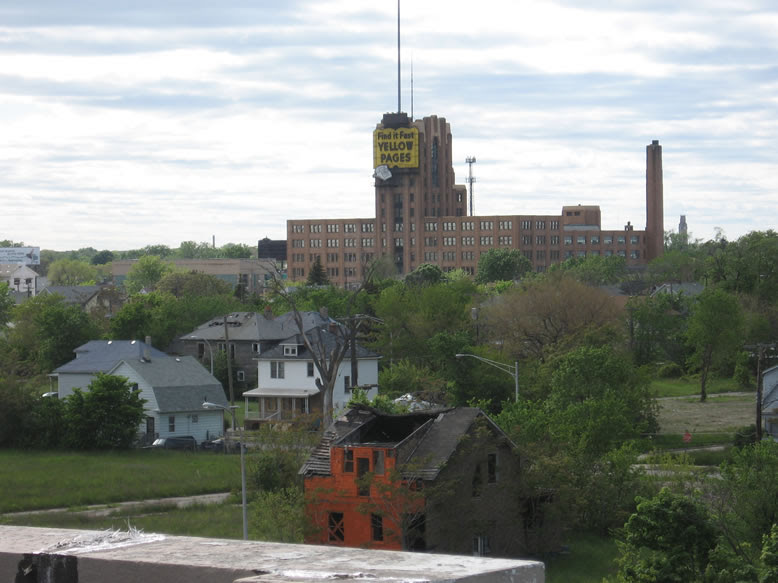 The orange house in the foreground of that photo was one of the ones that were painted "Tiggerific Orange" in order to "bring awareness" to the plethora of abandoned buildings in Highland Park.

Looking down from the roof at the Davison Expressway, which I don't think has experienced a traffic jam since the 1980s: 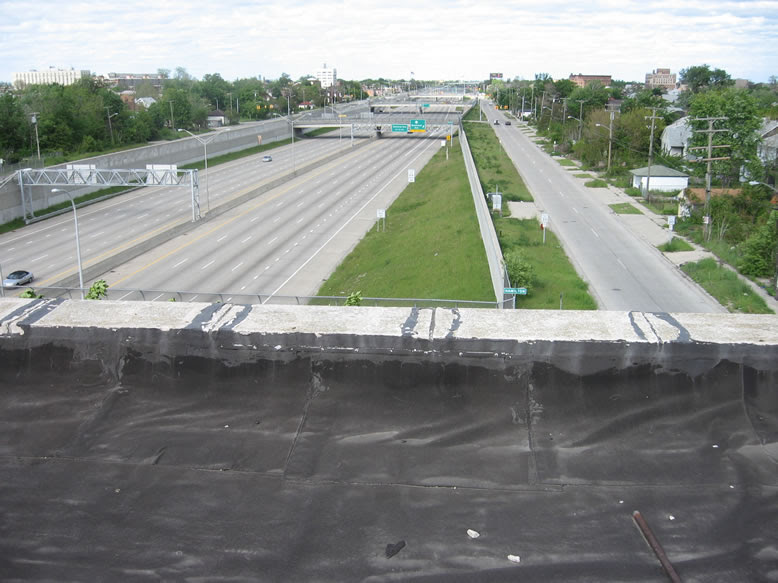 Here is a really cool historic photo from the Library of Congress showing the school and the old retaining wall of the Davison before it was totally rebuilt. That photo is labeled as having been taken in 1996. 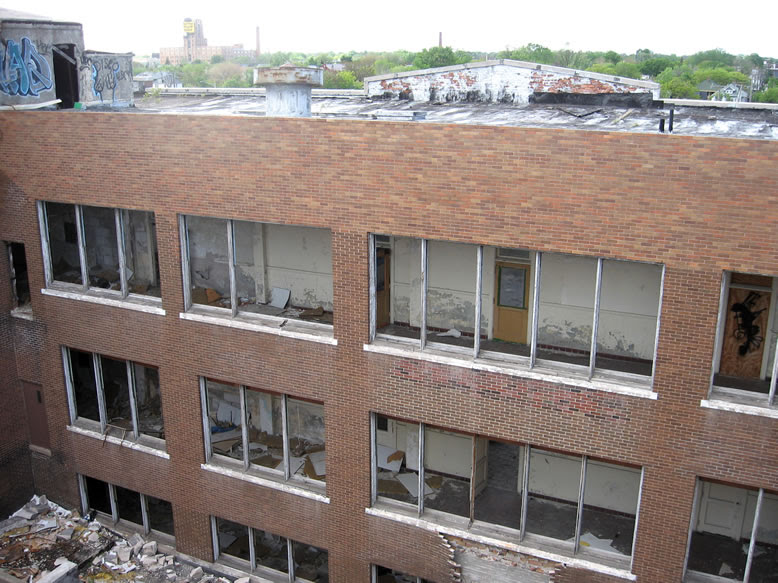 On our way out we stumbled upon the swimming pool, hidden in a dark room. Usually you don't see swimming pools in elementary schools, so perhaps at some point Willard housed other grades? Or maybe it's just a reflection on how prosperous Highland Park used to be. 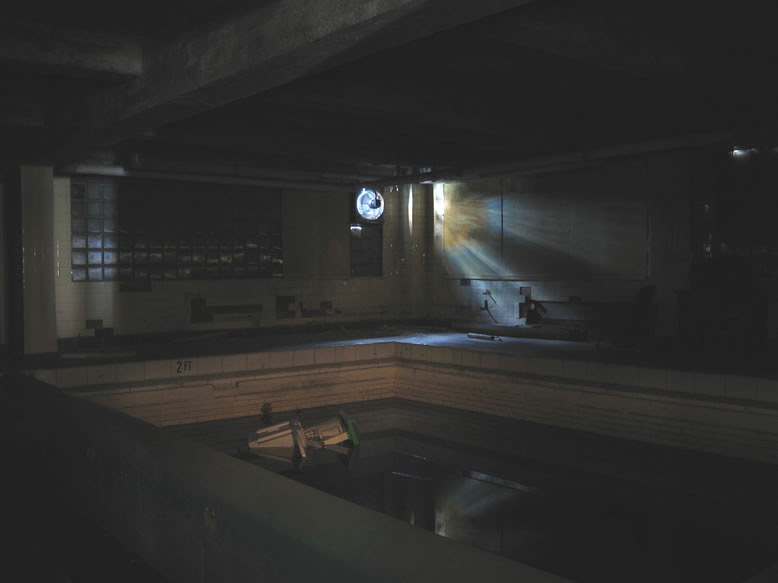 Just in case you forgot just how long ago this was: 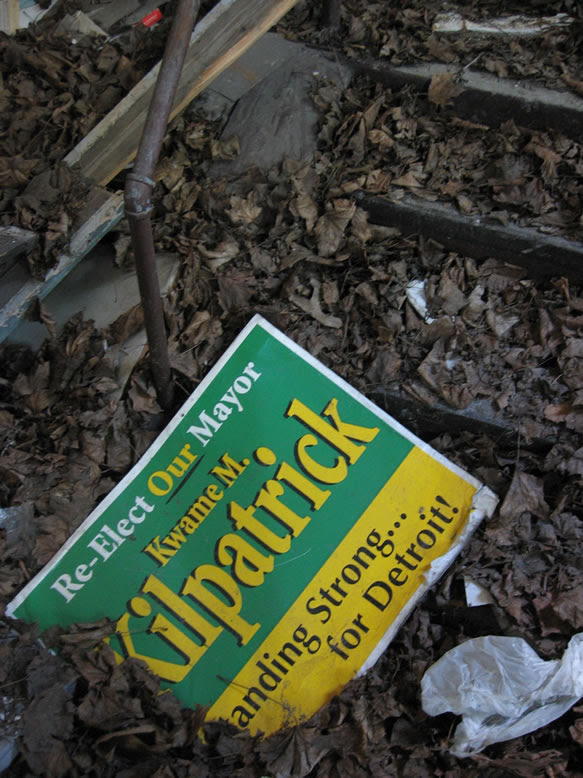 This school was demolished in 2012.