In Detroit's Oakwood Heights neighborhood lies a doomed firehouse that once was the quarters of Engine 48 of the Detroit Fire Department's 7th Battalion. This whole neighborhood now sits in the fallout zone of the new Marathon refinery that is being built down the road. They are buying up all the land surrounding their plant, and are either buying out any remaining homeowners who have not yet mutated, or slowly killing them with poisonous emissions and occasional late night explosions.

All existing structures will be demolished in the next couple years in order to create a "buffer zone" around the refinery, effectively erasing what little remains of the unique community of Oakwood Heights, and completely deleting any hope this neighborhood might've had. The police have stopped patrolling, and the arson problem that was already serious before Marathon wrote Oakwood Heights' death sentence then ran totally unchecked. 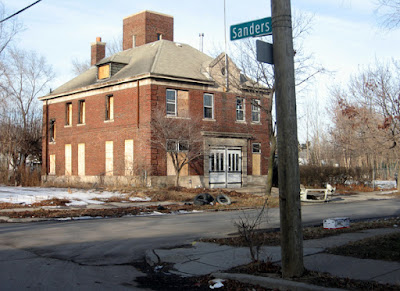 The only bulwark that would have stood against this slow holocaust was Engine 48, but according to the book Firehouses of the Detroit Fire Department by Jason J. Frattini, they relocated to 2300 Fort Street in the Boynton neighborhood in March of 1980. Because Engine 48's district is in the very southwestern corner of the city, and is separated from other districts by the Rouge River, it is the only engine company in the Detroit Fire Department that operates a "quint" rig, meaning that it can perform the capabilities of both a ladder truck and an engine, at least long enough for reinforcements to arrive if needed. Engine 48's quint is a 2002 Pierce.

Now that the Fort Street bascule bridge is out of commission long-term for demolition and reconstruction it is more important than ever that Engine 48 be able to work independently, since the chances of Engine 29 coming from Delray to assist on a call are much slimmer. At time of writing, both the Jefferson Avenue and Dix Avenue bascule bridges are also out of service as well. 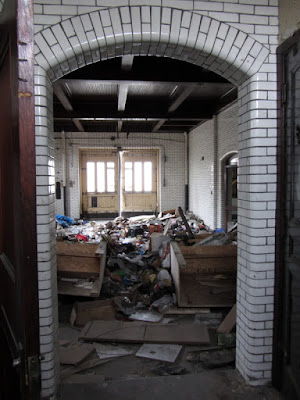 Engine 48 was organized here at Sanders & Bayside in November of 1924, and it was designed by Charles Kotting of the architectural firm of Chittenden & Kotting, who designed many of Detroit's firehouses in this era. 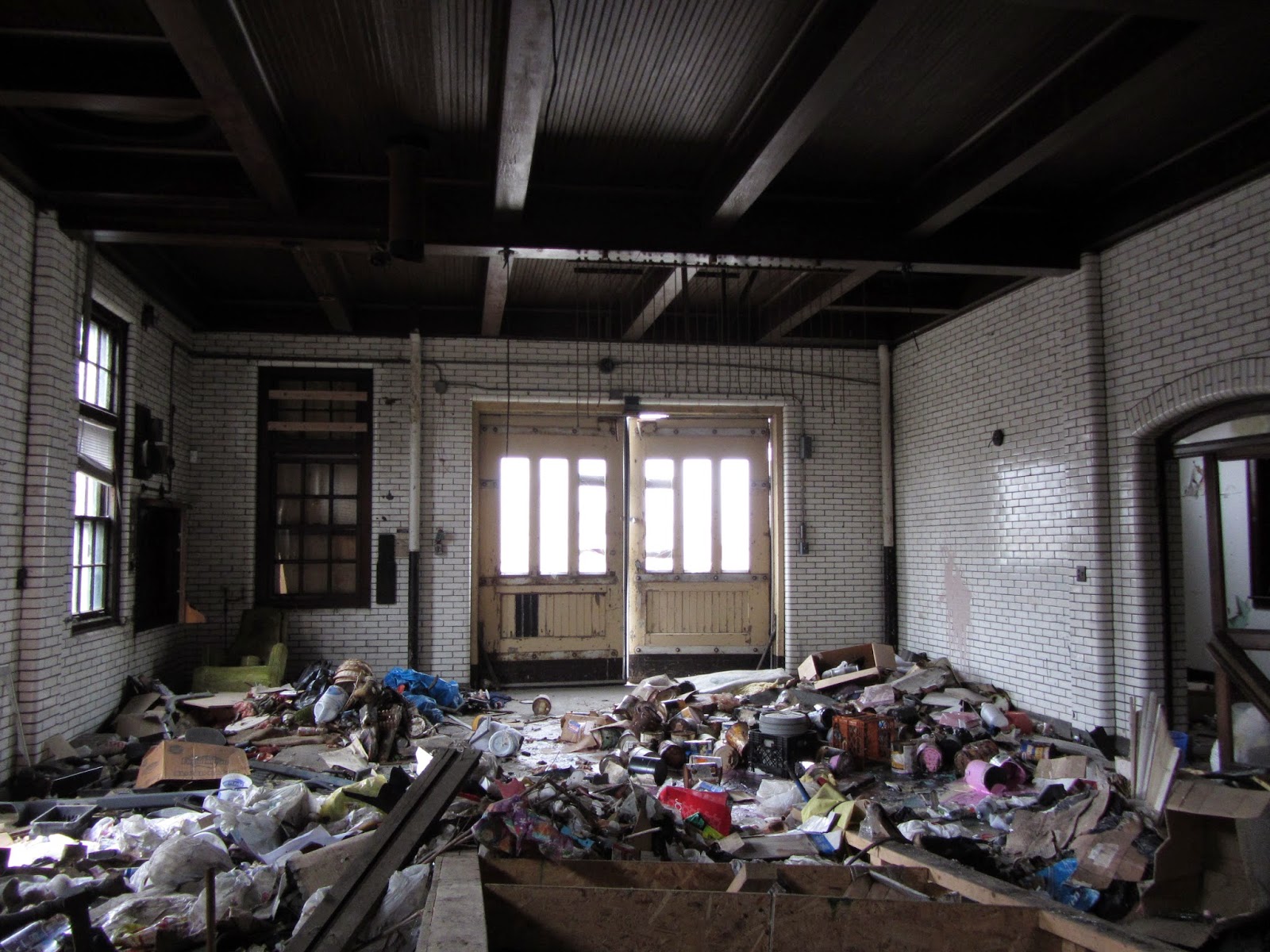 From late March to early April 2013 it was reported that Engine 48's new quarters had been left without electricity or telephone service after a storm, and furthermore their alarm system had been out of service for weeks. A backup generator provided by the city did not work, and firefighters were forced to rent one in order for their station to remain operational. 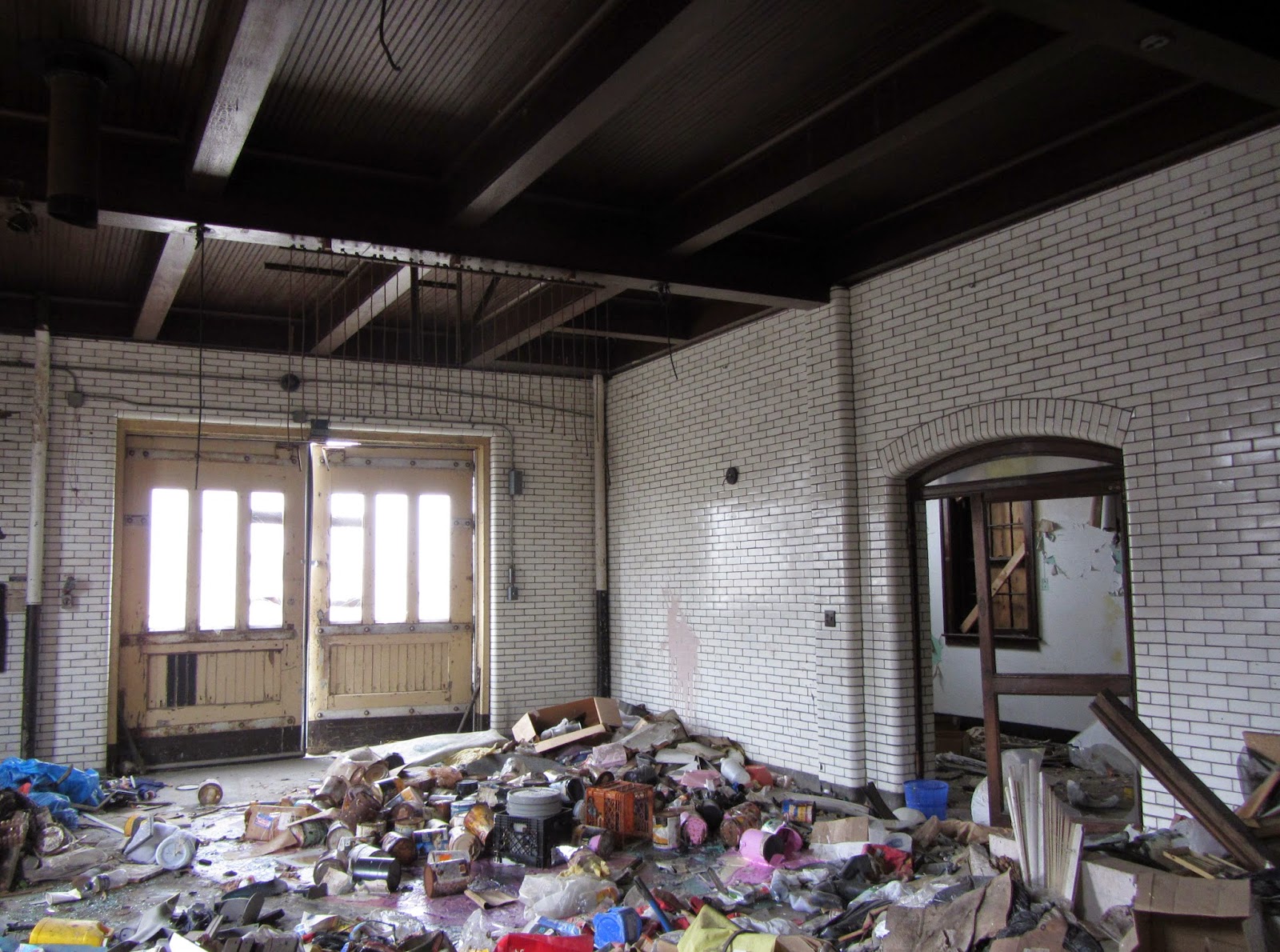 Another extended power outage at Engine 48 was reported in September of 2013, where firefighters were forced to live by candlelight. Their food had spoiled, they had no hot water, and they were forced to park their rig outside because the apparatus doors would not open without power. I have a feeling that the publicity received from this, and the now infamous "popcan alarm system," as well as a host of other glaring, vital equipment failures in many other DFD firehouses is what prompted city officials to recently send out a memo forbidding firemen from speaking to the media, under penalty of disciplinary action.

When the film documentary BURN came out a few years ago, it too depicted the DFD's shortcomings in a way that probably did not sit well with city hall. But you can't hide the truth from the taxpaying public—especially when it directly affects their community's safety. 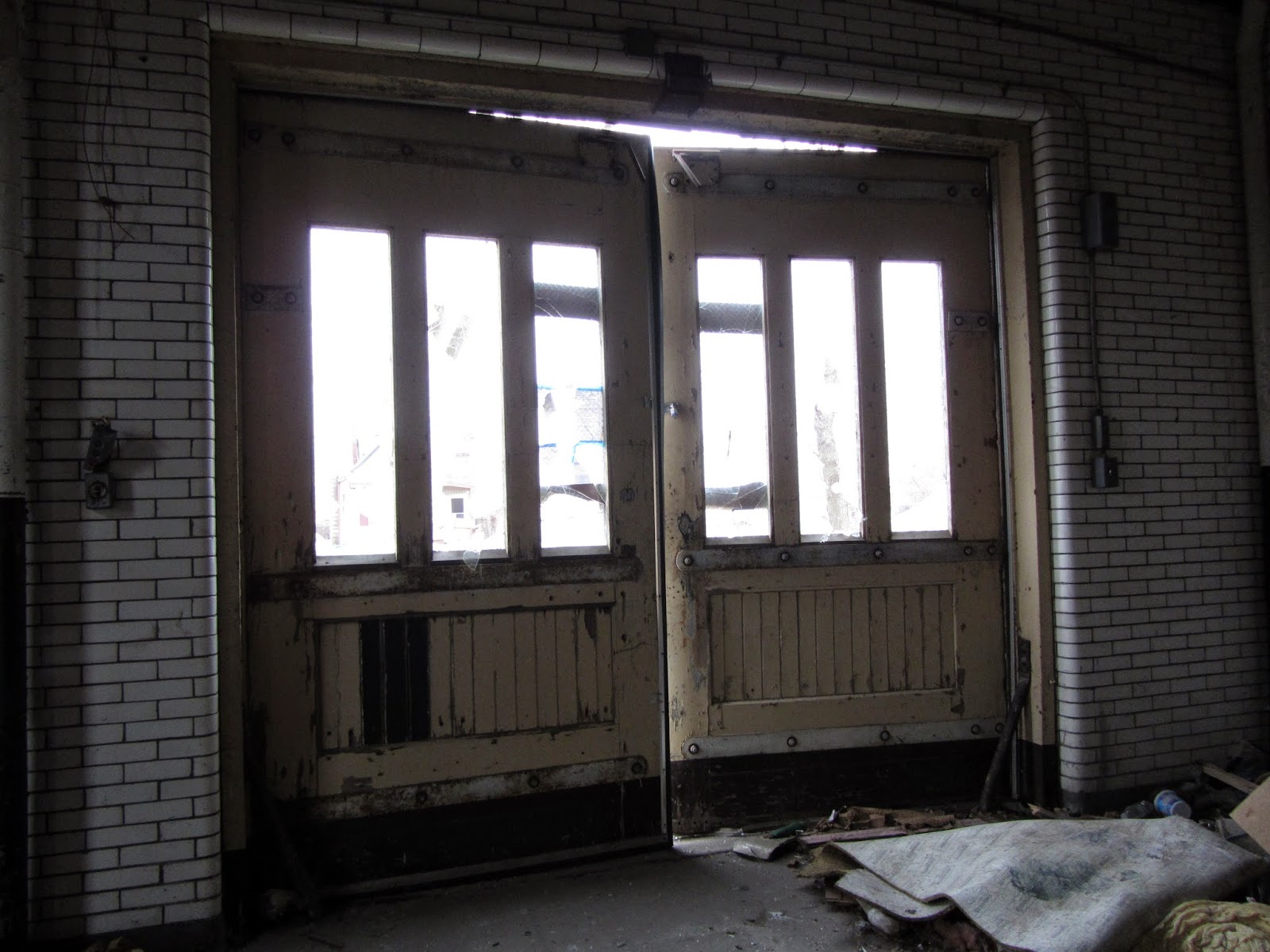 On the detroitfirehouse website a person named Greg Johnson commented that he used to live across from this firehouse at 651 Bayside back in the 1980s, and said "the guys were fun to hang out with when I was young...I miss Captain Bill with his sidekicks Mark, Raulph, and Charlie." He also said he remembered Engine 48 responding to a fire at the nearby salt mine sometime around 1982.

I have read elsewhere that the Tac 4 unit moved into this quarters when Engine 48 moved out, and occupied it until about 1983 when they too were disbanded. At some point after that it was sold again, and was reportedly used as a private residence in the mid-2000s. 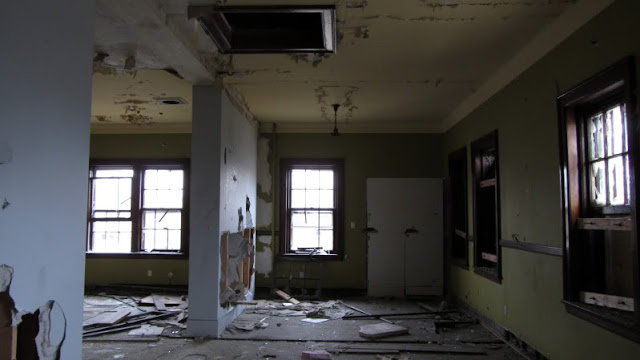 Upstairs were the living quarters for the firemen, complete with beautiful original wooden window casements. 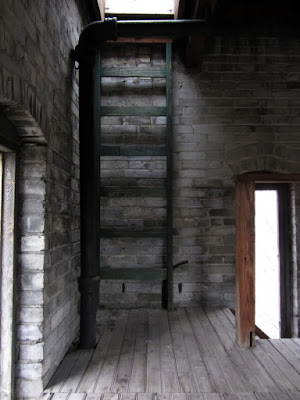 I ascended the fire station's hose tower and was treated to an impressive view, ugly and industrial though it may be. The new refinery, to the west: 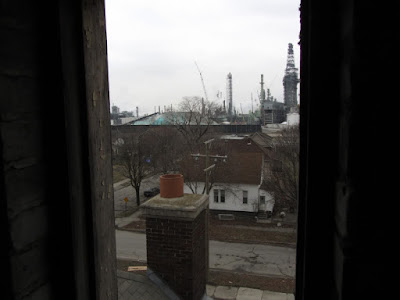 To the south, the headframe of the Detroit Salt Co. mine: 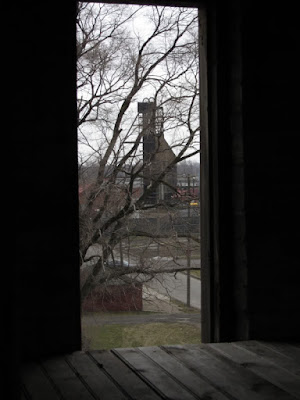 The Ford Rouge Plant churning away in Dearborn, just to the north: 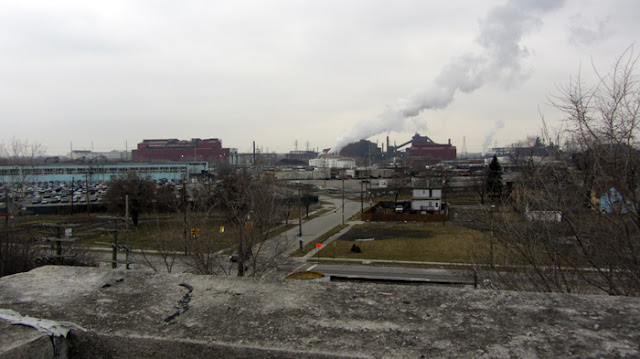 One of the operating refineries of the Boynton area: 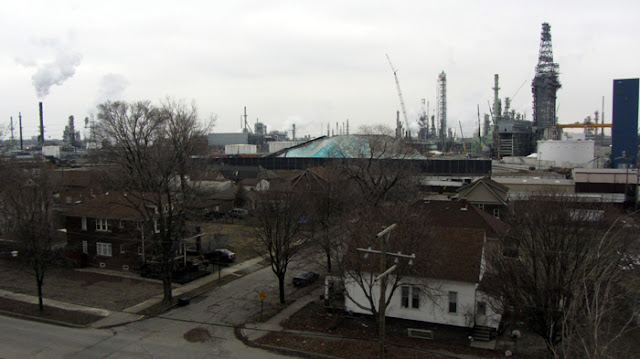 And a wider shot, showing the new one under construction to the right: 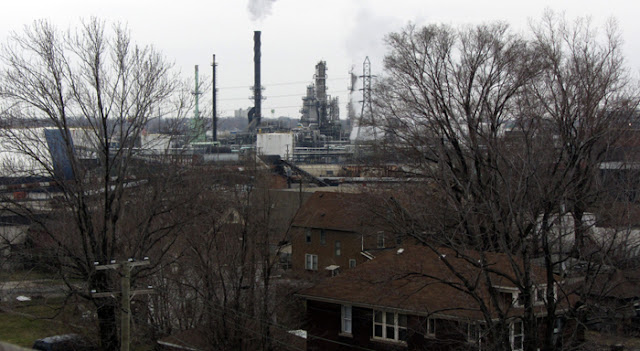 The grand sweeping skyline of beautiful "Chokewood" Heights, and the equally grimy Carbon Works neighborhood, with the scenic Fisher Freeway grade-separation looming over everything: 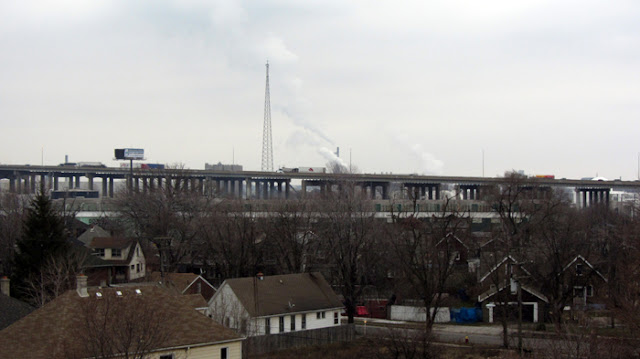 Zooming in on the new refinery: 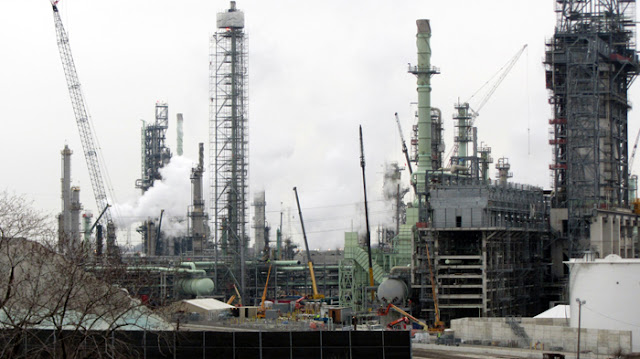 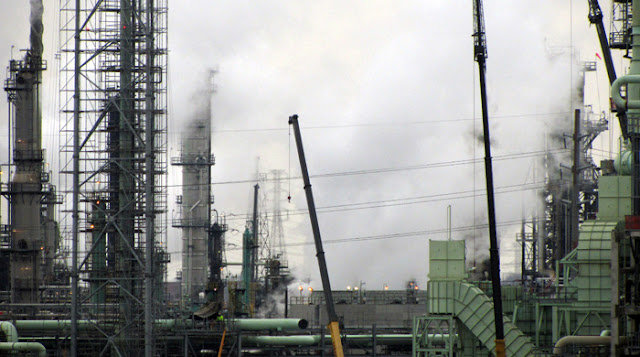 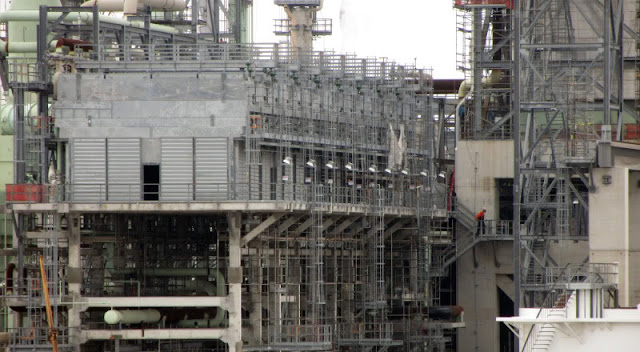 Sometime before April of 2012, the arsonists completely gutted this old firehouse too. No more enjoying the view from the hose tower for me. 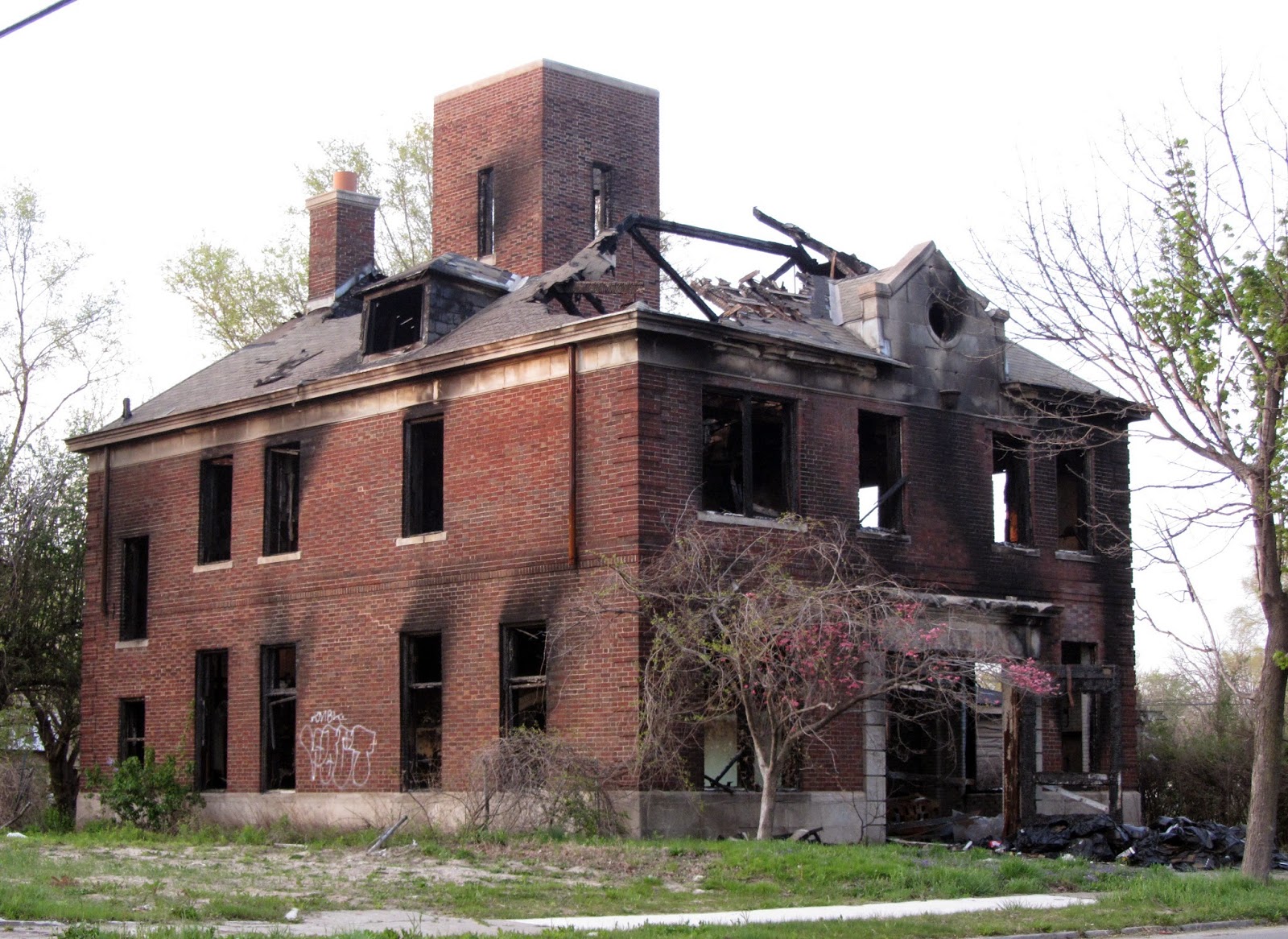 Here is another post where I talked about the abandoned firehouse of Engine 22.