The G.W. Ferris School at 60 Cortland Street, Highland Park was built in 1911, designed by local architect Wells D. Butterfield, and today sits abandoned in one of the most desolate parts of that city: 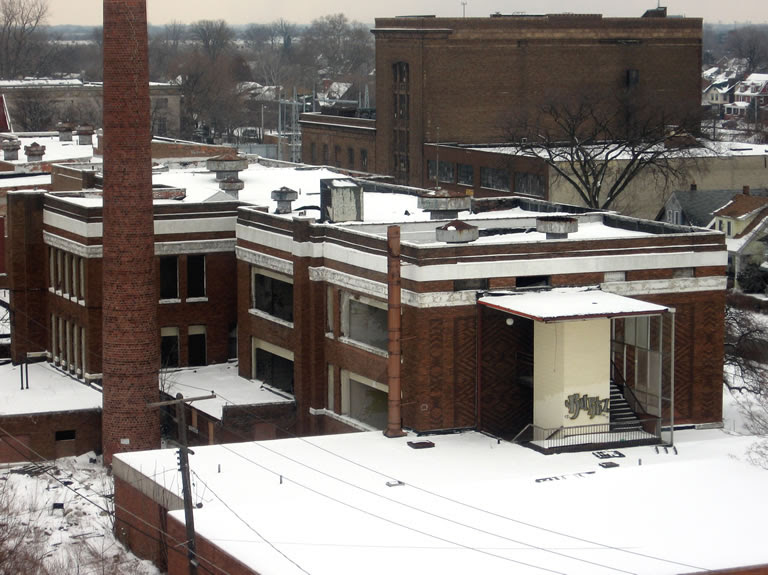 The above view of the school came from the Roselawn Apartments down the street, in 2008.

Plans were already being made to expand the school before it was opened, and during the open house a map of Highland Park showing the location of every student's home was put on display, partly to illustrate to parents why they should support additional funding for expansion. 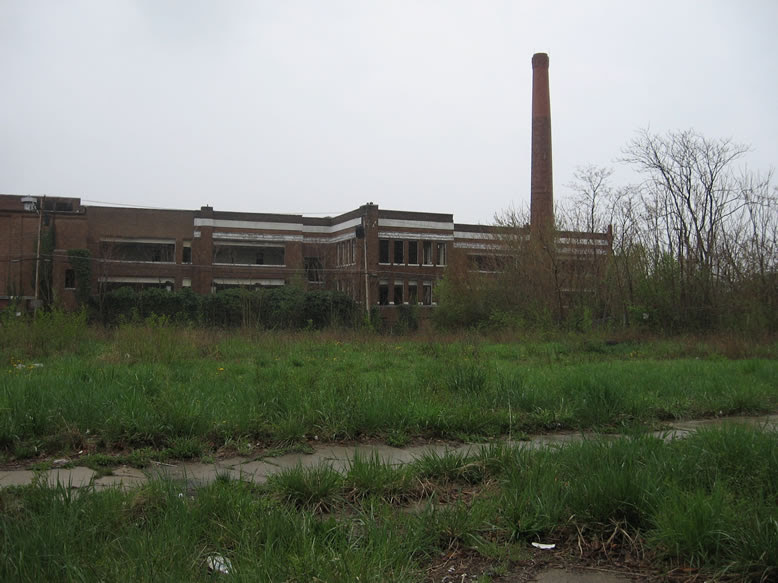 Not only was expansion being planned for the school before it opened, but it was being opened before it was even completed! The architect reported at the beginning of October 1911 that the first floor would be in enough of a state of completion and enough chairs would be secured so that classes for some of the grades could begin the following week.

Meanwhile construction would continue on the rest of the school. If this isn't a testament to how ridiculously fast Highland Park's population exploded in the Model-T era, I don't know what is. Perhaps this also is why the building has such an odd, unresolved shape; it is hard to tell where the front or main entrance is, since there seems to be no symmetrical center; it's just a big sprawling building that kept getting added onto as money and construction workers became available. 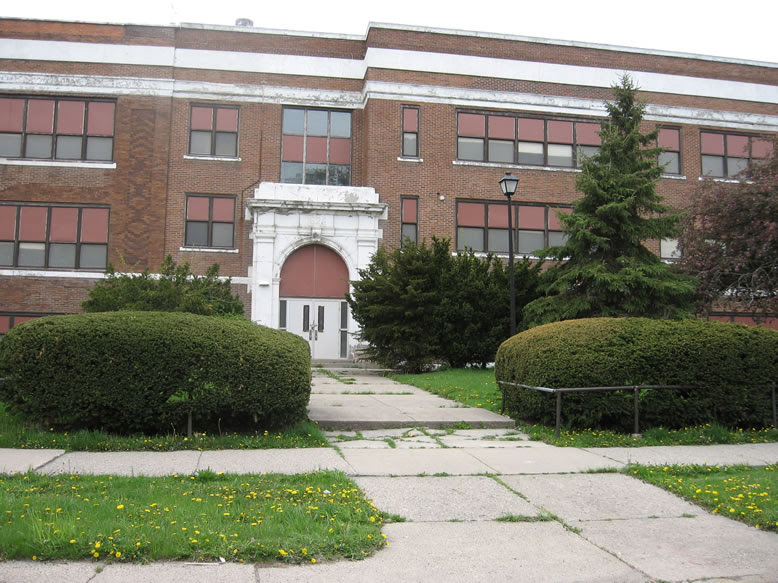 The school was named after the late George W. Ferris, one of the first school board members in the village of Highland Park, who also physically helped build its first school, the Stevens School, so that it could be completed as quickly as possible. He is not to be confused however with the George W. Ferris who lived around the same time, inventor of the Ferris Wheel.

Teachers and staff for Ferris's opening were borrowed from other schools, until new staff for the school could be hired. The first acting principals of Ferris School were T.J. Knapp and E.H.E Mumford. 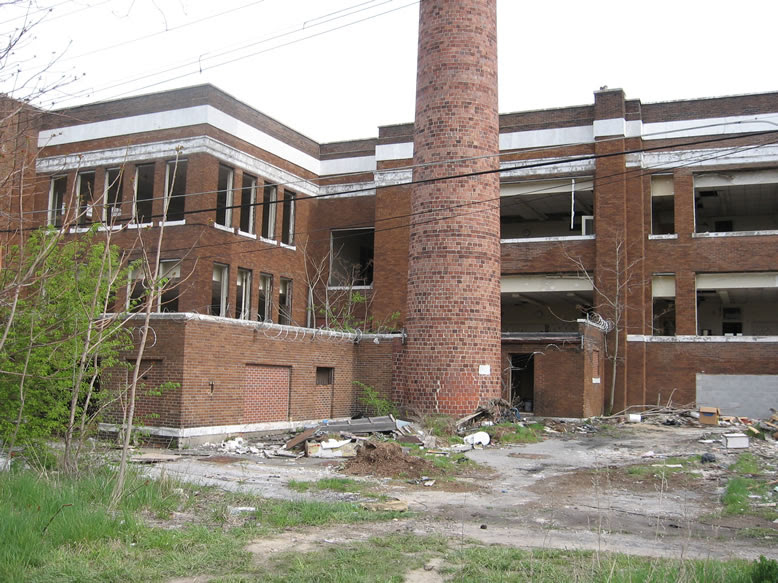 It's not every public school that has a razorwire perimeter installed around its roofline like a prison, but we're in Highland Park now: 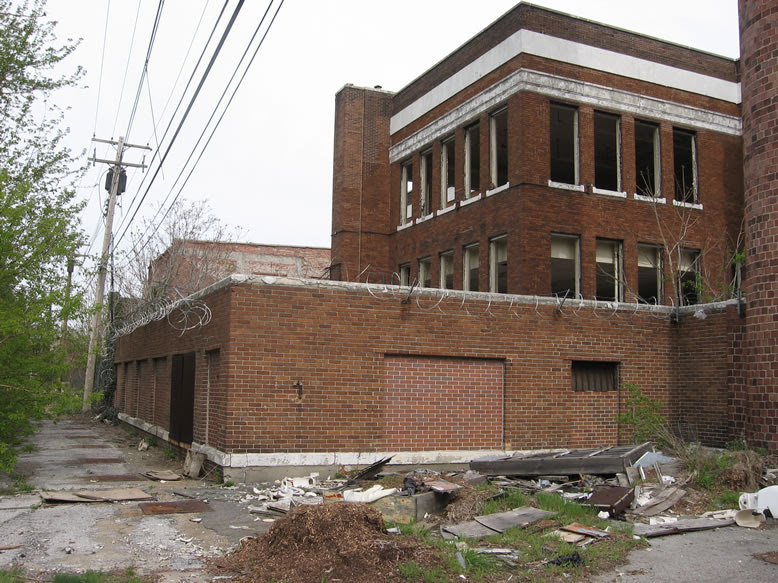 Inside near the main stairwell was this very fancy fountainback, probably made of Pewabic Tiles, and dedicated to Beatrice Reilley, who I believe was another Highland Park educator: 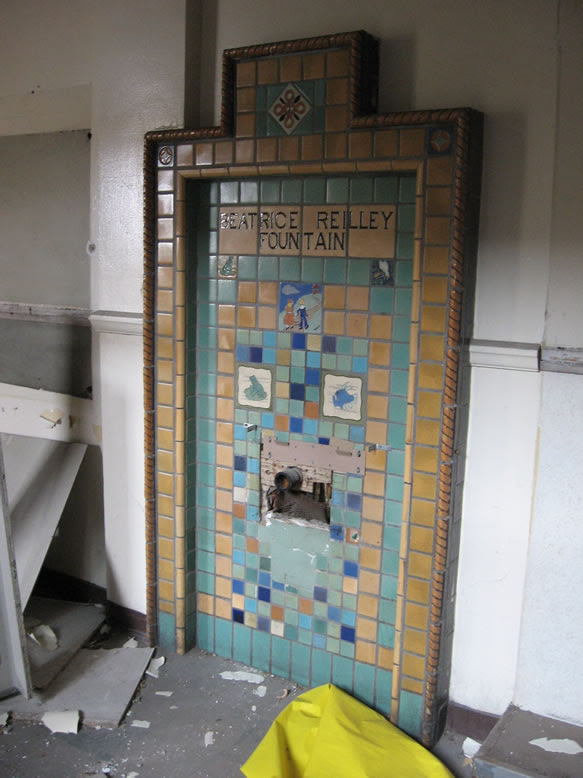 The fountain itself has of course been heisted for scrap metal. 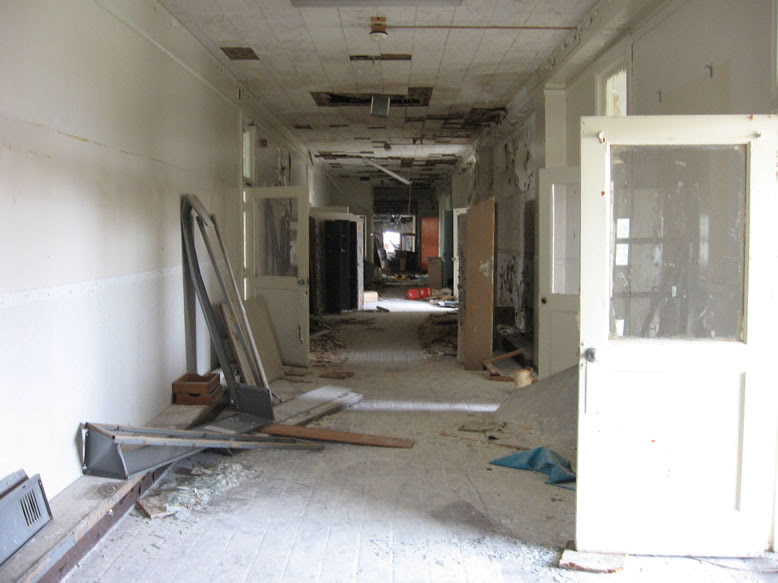 Other than the fancy fountain, this cafeteria with an overgrown courtyard in the middle of it was probably the most interesting feature of the school: 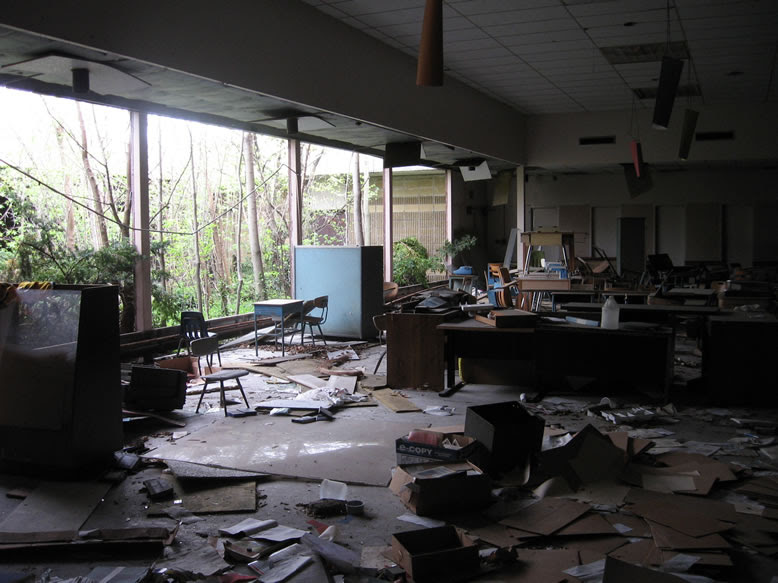 It illustrates that the school was built-onto yet again in the latter half of the 20th century. 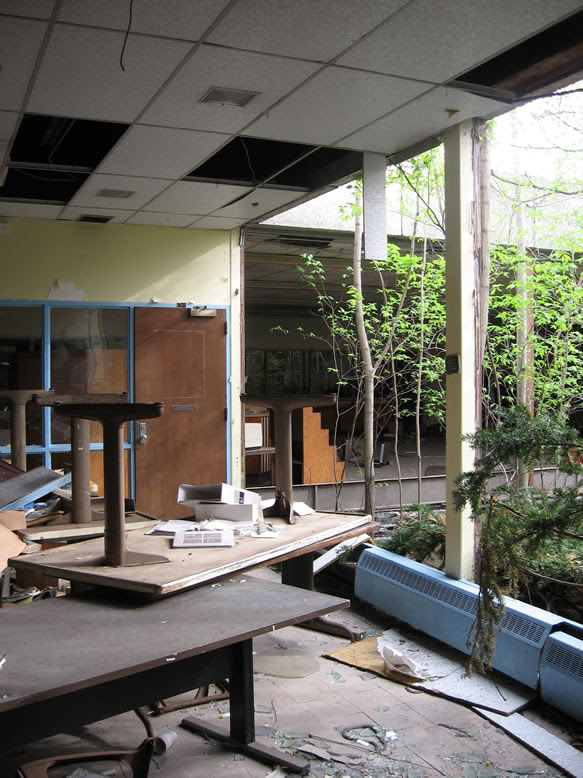 Up the alley, the shell of yet another burned-out apartment building can be seen: 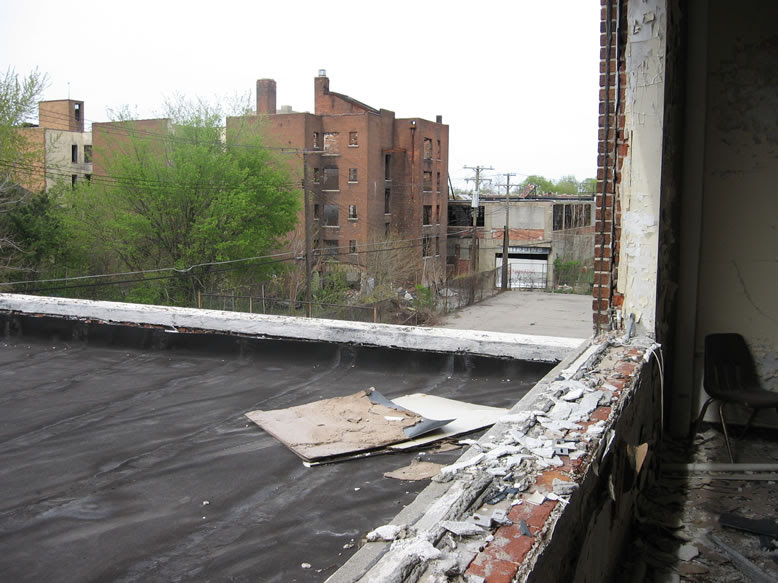 Looming opposite from us was a view of 70 Highland Street and the several other neighboring vacant apartment buildings: 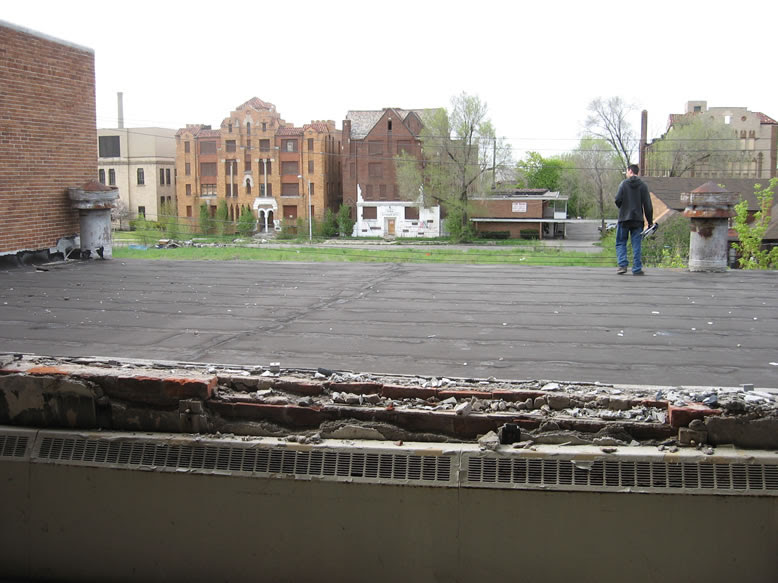 As everyone knows by now, the near-volcanic expansion of Highland Park in the first half of the 20th century was balanced by an equal and opposite depopulation in the latter half of the century. Sort of like the "Oscillating Universe" model proposed by Einstein where each "Big Bang" is followed by a "Big Crunch." 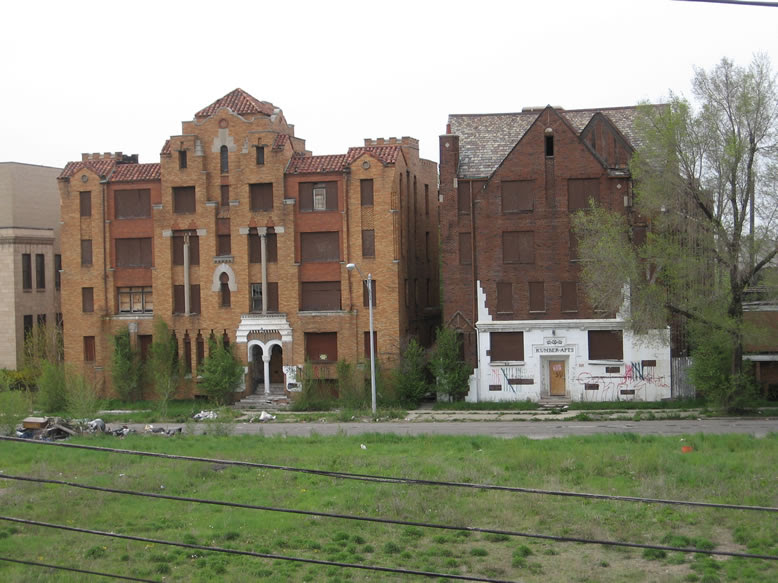 Highland Park has just about reached its point of quantum singularity, I'd say...meaning that pretty soon it will only be able to expand again. 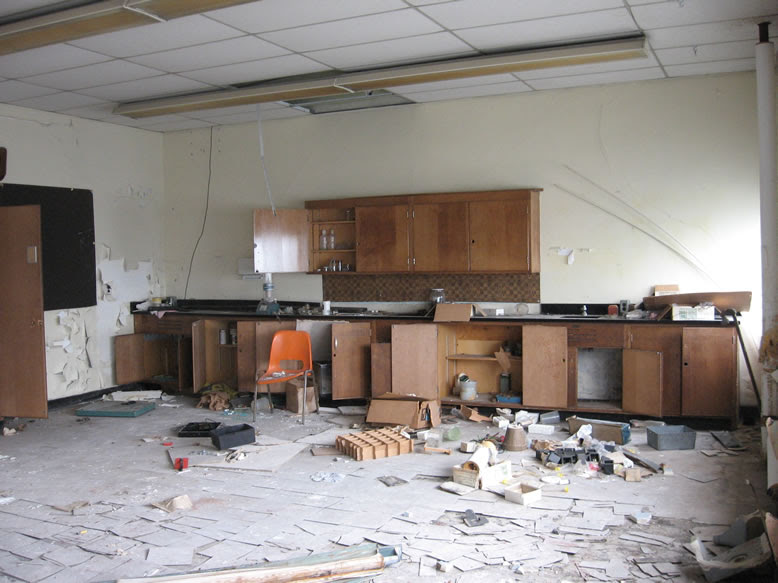 I found this historic photo in the book Kindergartens of the Public Schools, Highland Park, Michigan, apparently showing elementary-age children getting a head-start on manual labor skills: 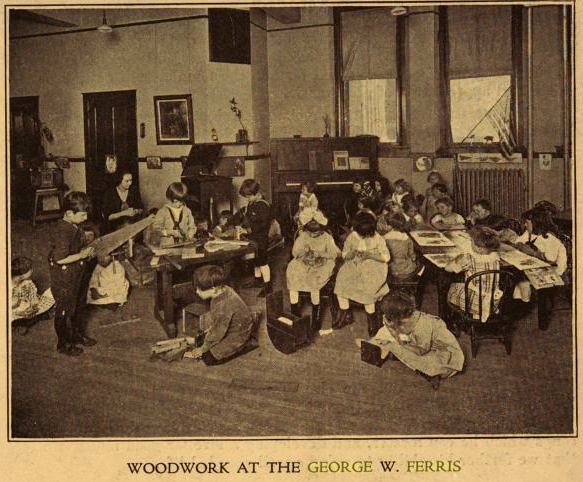 At some point the Ferris School switched over from being an elementary to a junior high school, which is what it was when it finally closed in the 1990s. 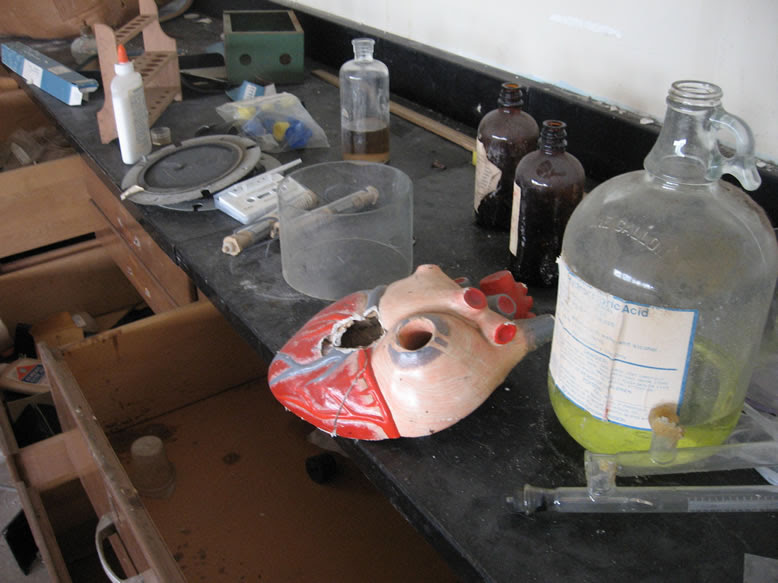 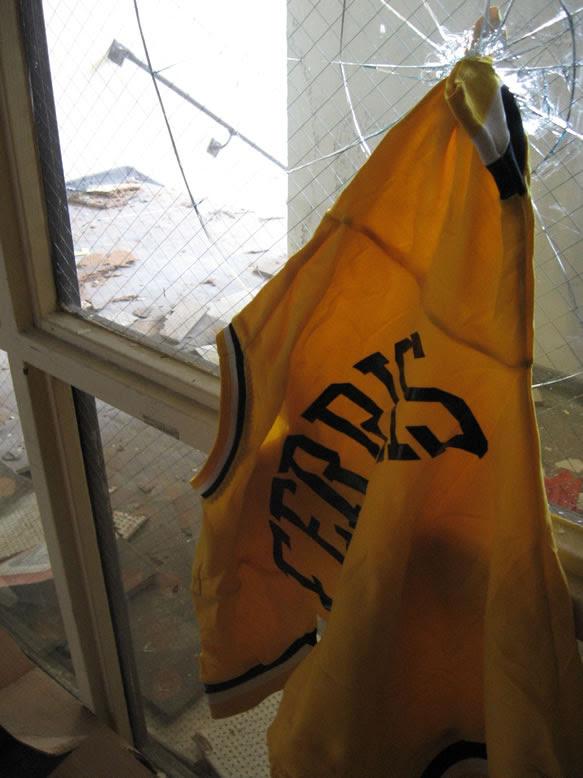 Ferris School was supposed to have been demolished like the Willard School, but that has not happened as yet. 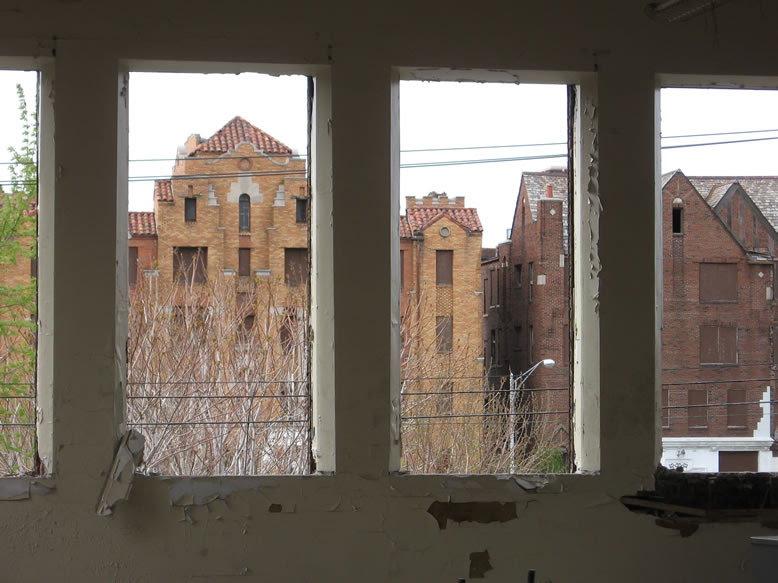 This stairwell was another tacked-on modification to the building in the late 20th century: 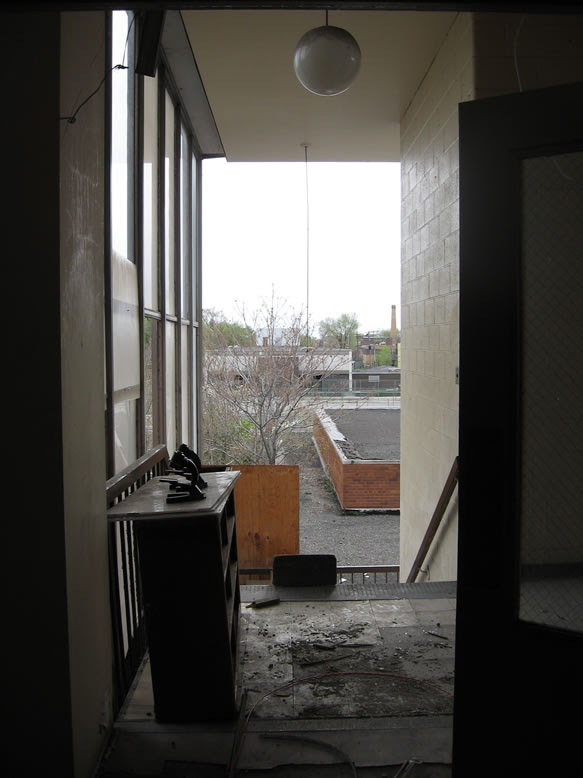 This is one of the older stairwells: 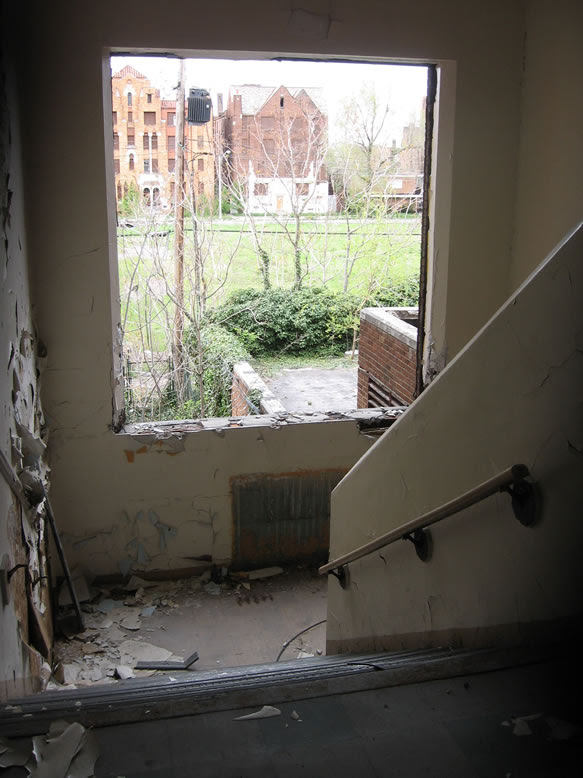 A Detroit Edison substation across the street, and the distant downtown Detroit skyline behind it: 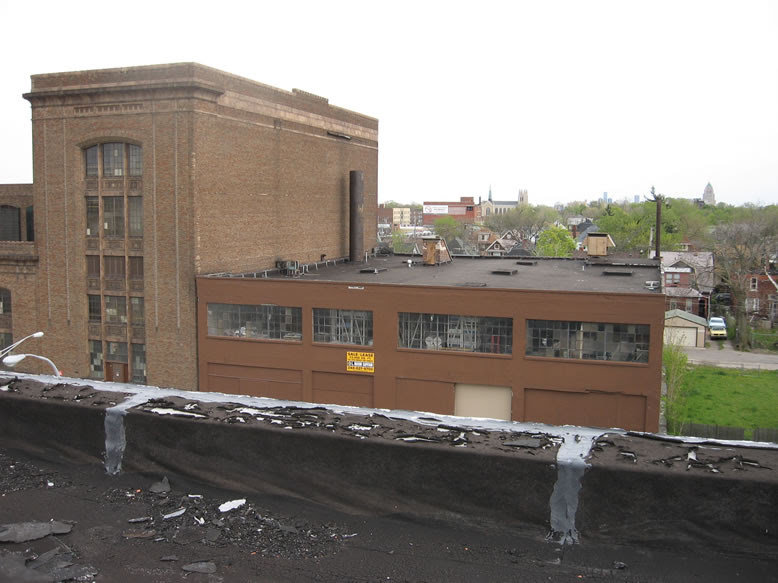 From the roof, the demolished Sharon Hall can be seen at the right of this photo: 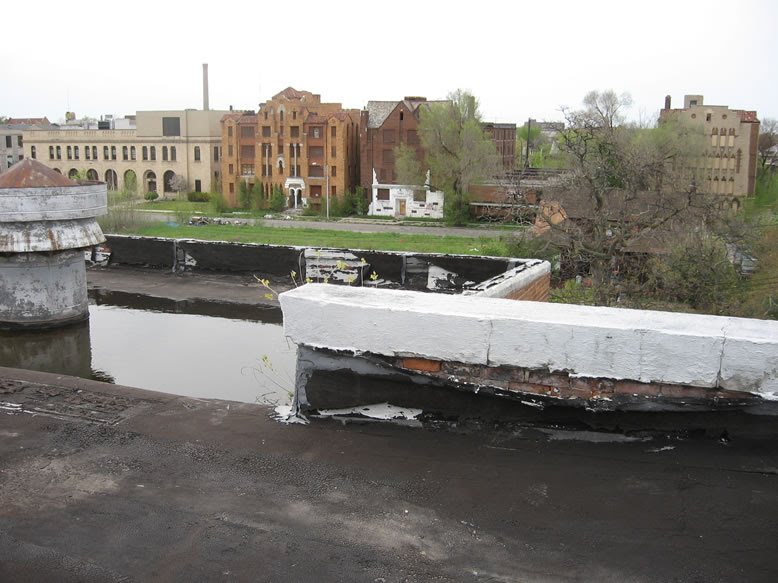 Detroit seems so far away... 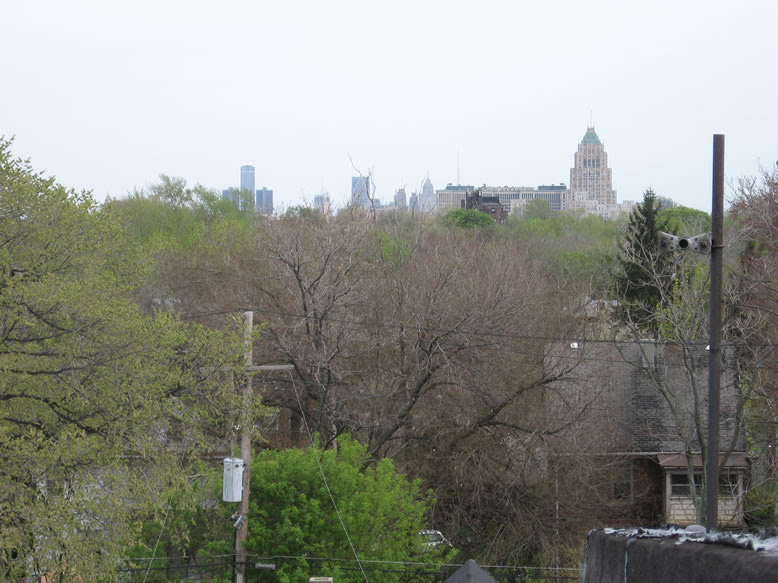