One Gargoyle. Just One.

An exploitable opportunity was identified. It was too juicy to pass up. 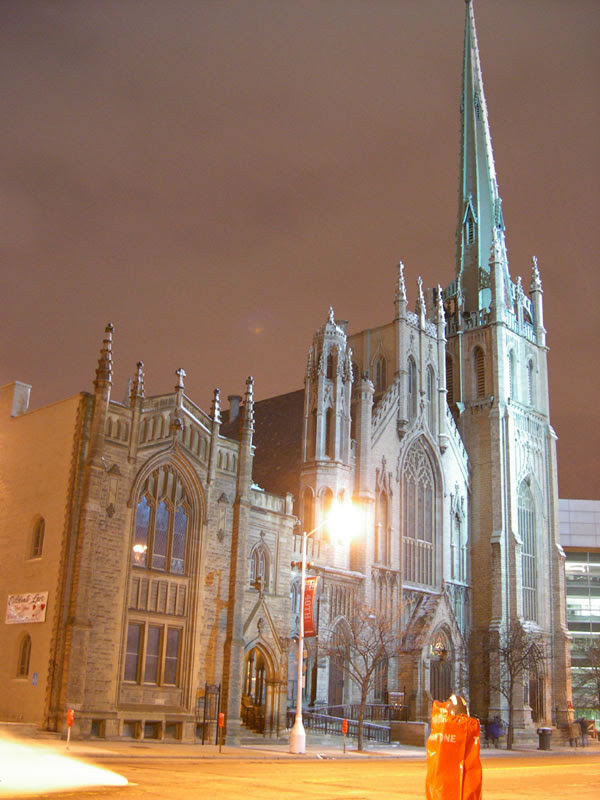 I'm not sure my partner derived the same thrill from this as I did, but oh well. Once in a while, it is nice at least to explore something that isn't an abandoned, dilapidated mess, but rather well cared for. 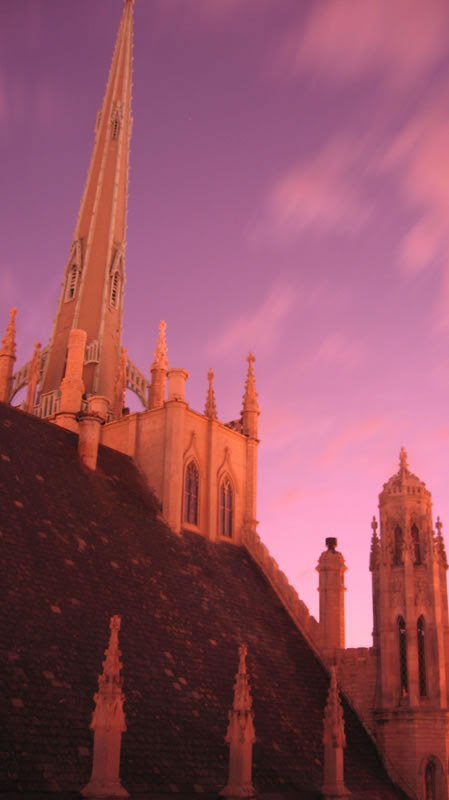 Unfortunately I was so excited I forgot my camera was set on 16:9 panoramic mode for most of the night, even for the vertical shots... 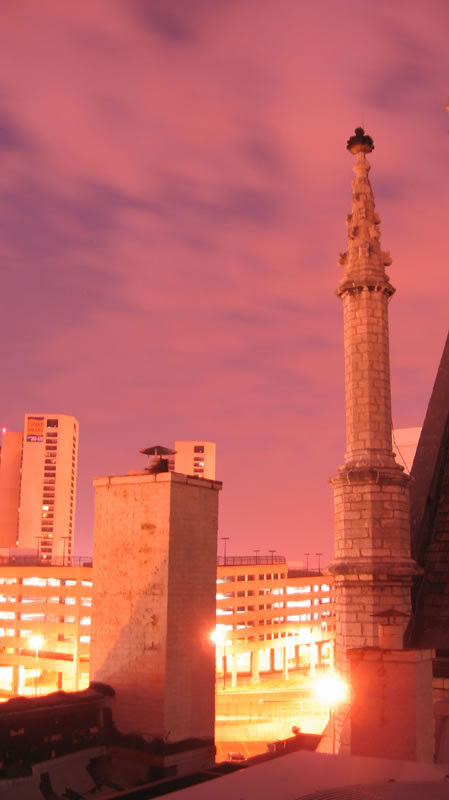 Fort Street Presbyterian Church is the product of an influx of English immigrants in the 1830s and 1840s, and was an expansion of the Second Presbyterian Church founded in 1849. The first church plot was located at 188 Lafayette, on land donated by Lewis Cass himself, but it was considered "too far out of town," and it was traded away to acquire a building at Wayne & Lafayette until they could afford to erect their own permanent structure. 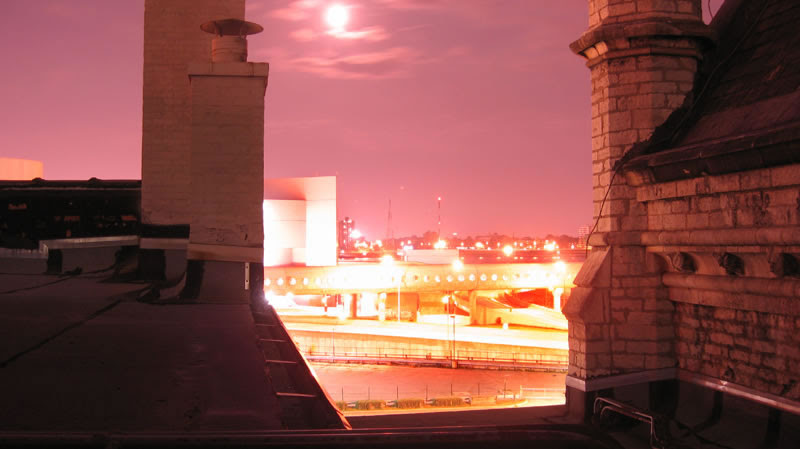 Architects Albert and Octavius Jordan were hired to design the church, and it opened in 1855 (they also designed the St. John's Episcopal Church on Woodward a few years later). The limestone was quarried in Amherstburg, Ontario, and at that time its steeple was the tallest structure in Detroit. In 1876 however, this church was completely consumed by a fire, causing that steeple to topple over into Fort Street. On the exact same architectural plans, the church was completely rebuilt again, but the roof was burned off a second time in 1914. Again, the roof was rebuilt according to the original specs. 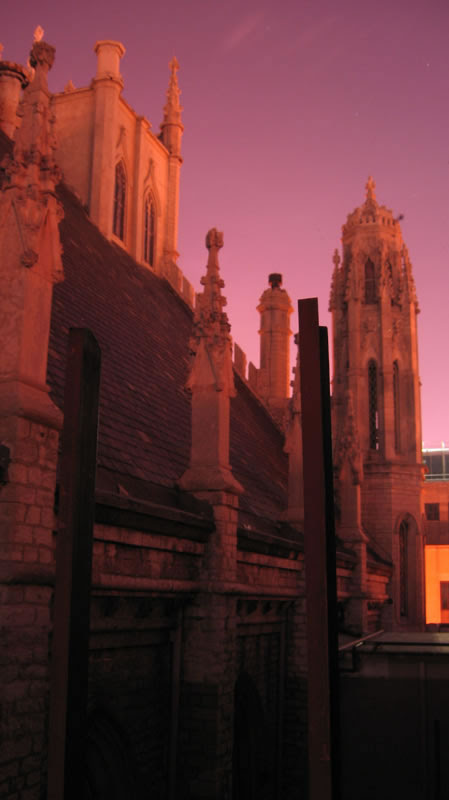 According to the Detroit Historical Society, this church sponsored one of the first Boy Scout troops west of the Alleghenies and during World War II, this gymnasium was used as a dormitory for servicemen who were constantly coming and going at the Union Depot train station that used to be across the street. 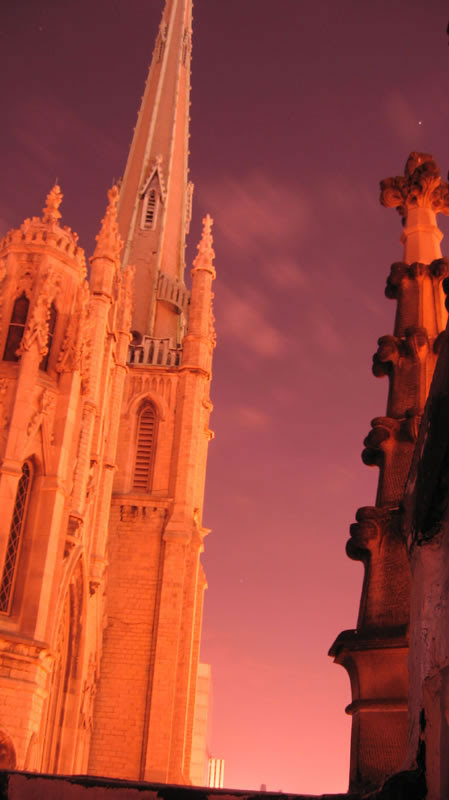 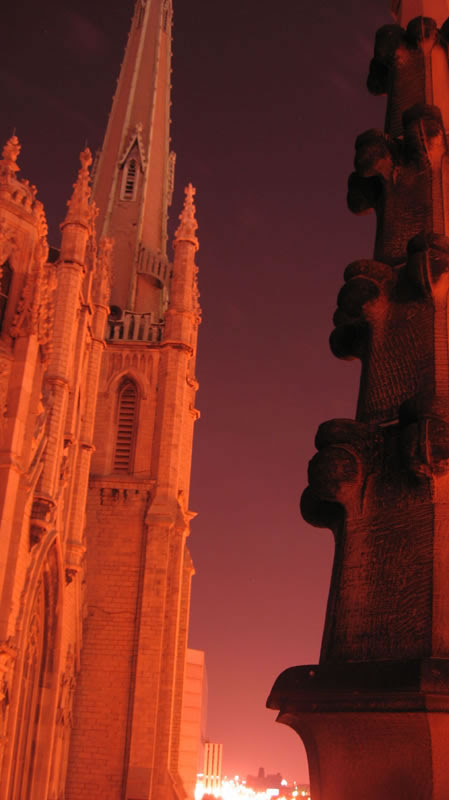 It is one of the handful of 1850s-era Detroit churches built of limestone block. The gymnasium addition we were on the roof of was built later, of course. 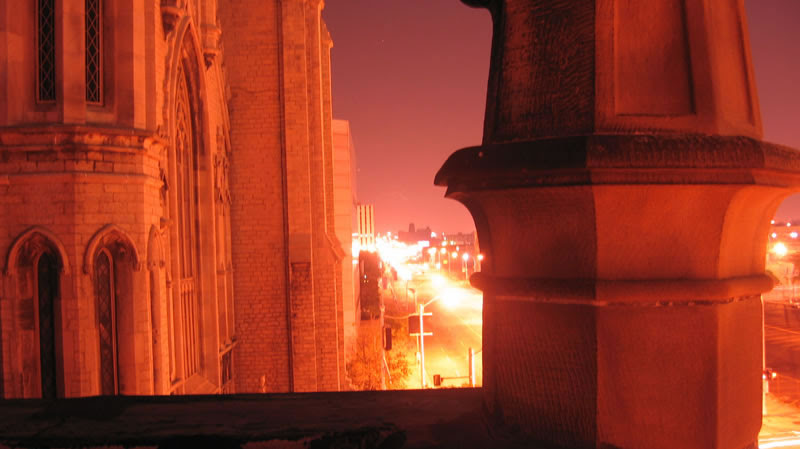 Fort Street Presbyterian has an excellent choral and organ music program, with upcoming events posted on their website. 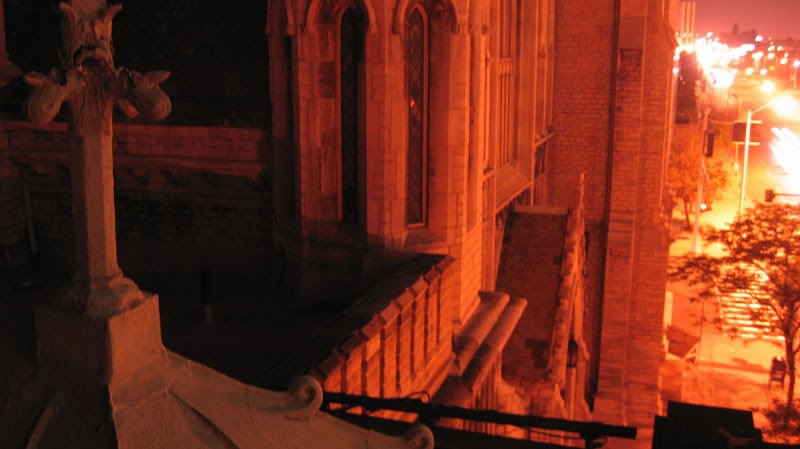 As you can see, the dark Fort Shelby Hotel had not been renovated yet by this time: 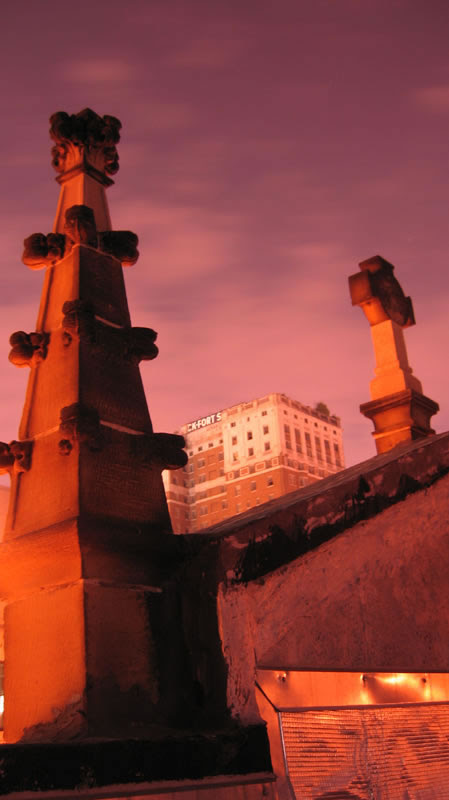 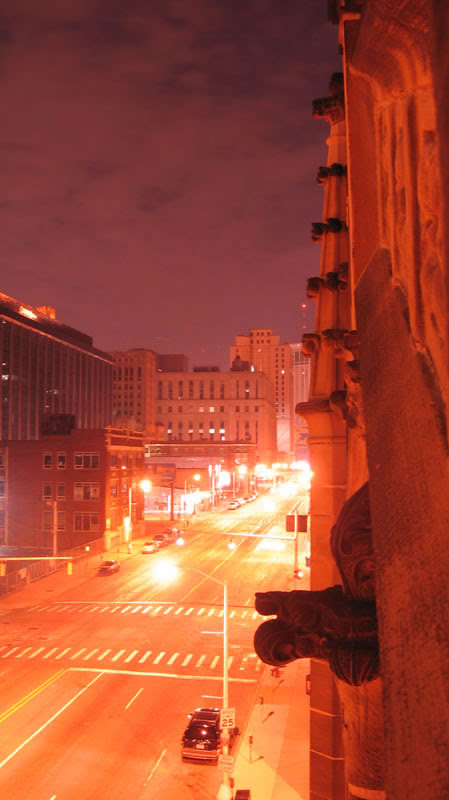 The gymnasium was the part of the roof I was on: 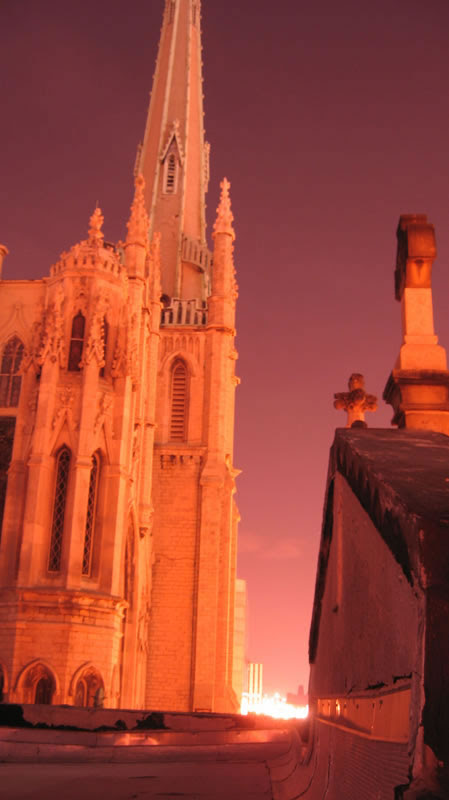 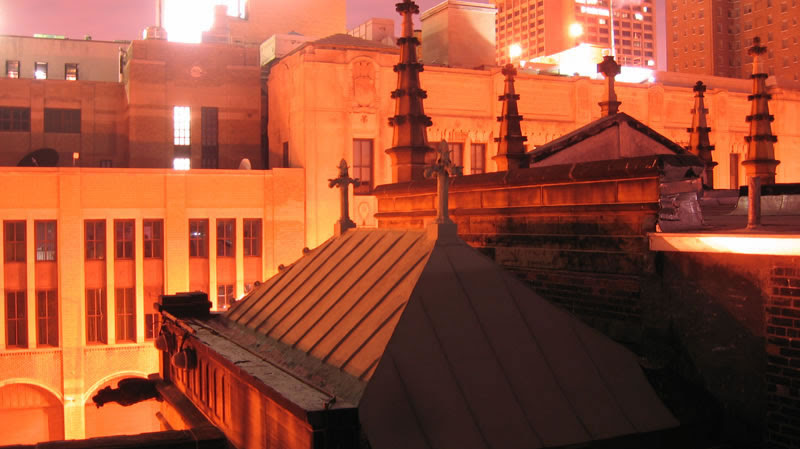 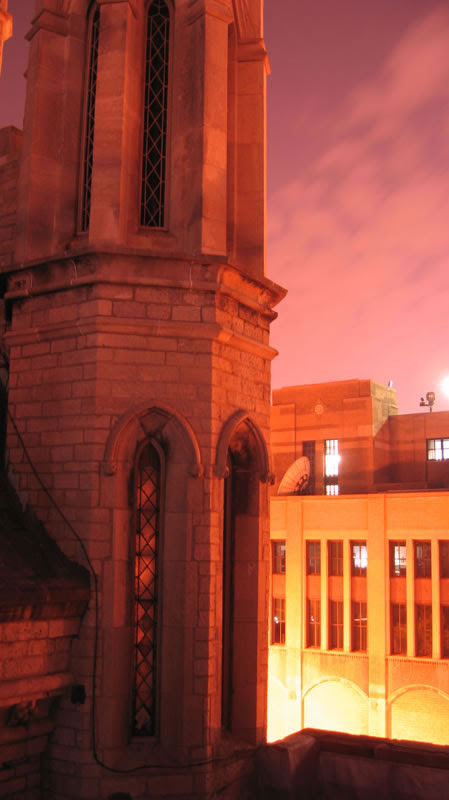 I can't remember why I didn't scale the rest of the way up the roof here, but I'm sure the excuse is too feeble to stand. Now there is a security guard who keeps an eye on this side of the building, so a return trip is essentially out of the question. 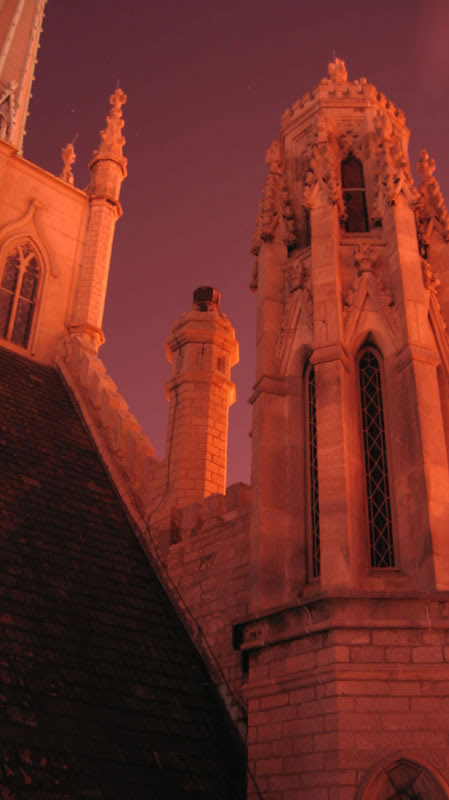 And here is the one single solitary gargoyle that guards Fort Street Presbyterian... 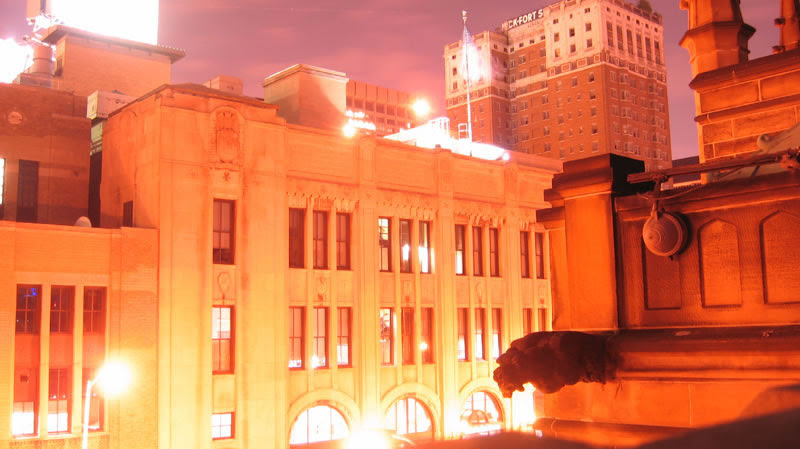 ...he is such a badass that he can handle this all by himself.* 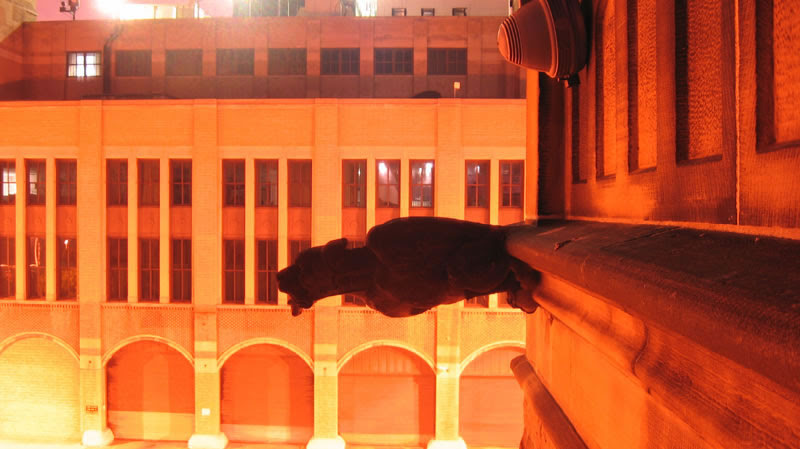 I must have thought the orange sodium shadows of the tree on the ground looked cool: 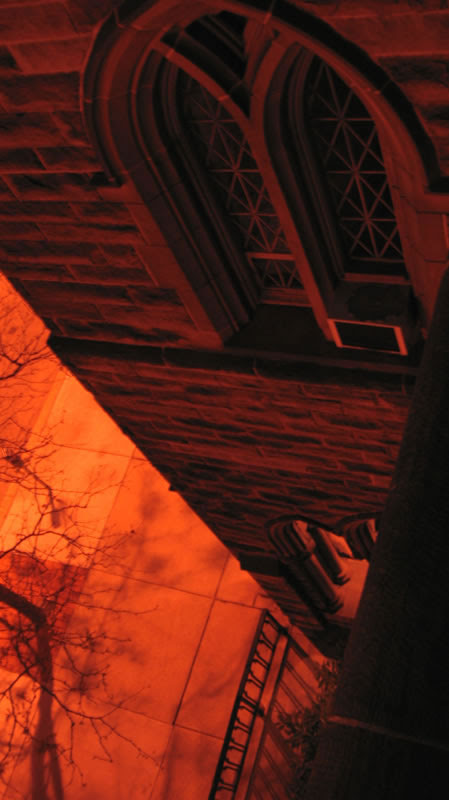 Moonlight peeking out from behind a chimney: 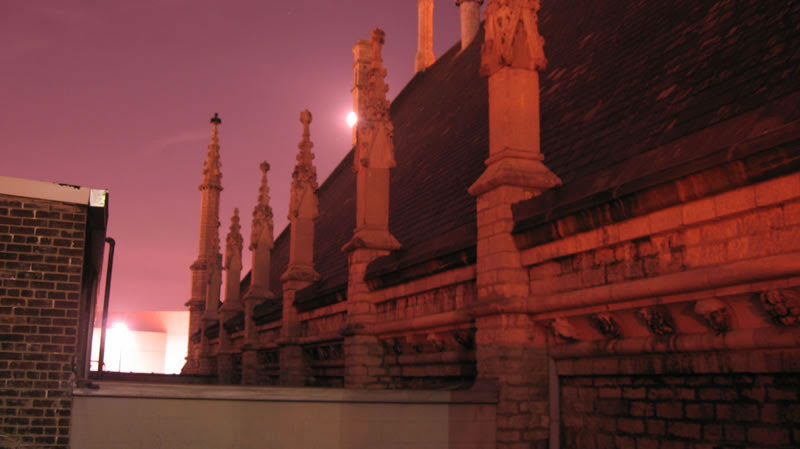 So what does the inside look like, you ask? 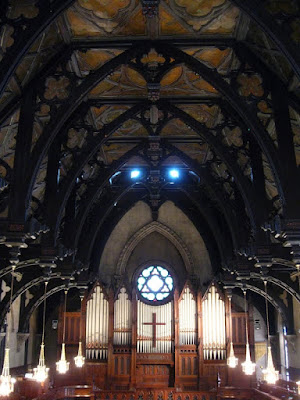 I came back at some point later to visit the church and see about sneaking into that one little tower...but the way was blocked by a horrifying mass of filth-ridden cobwebs: 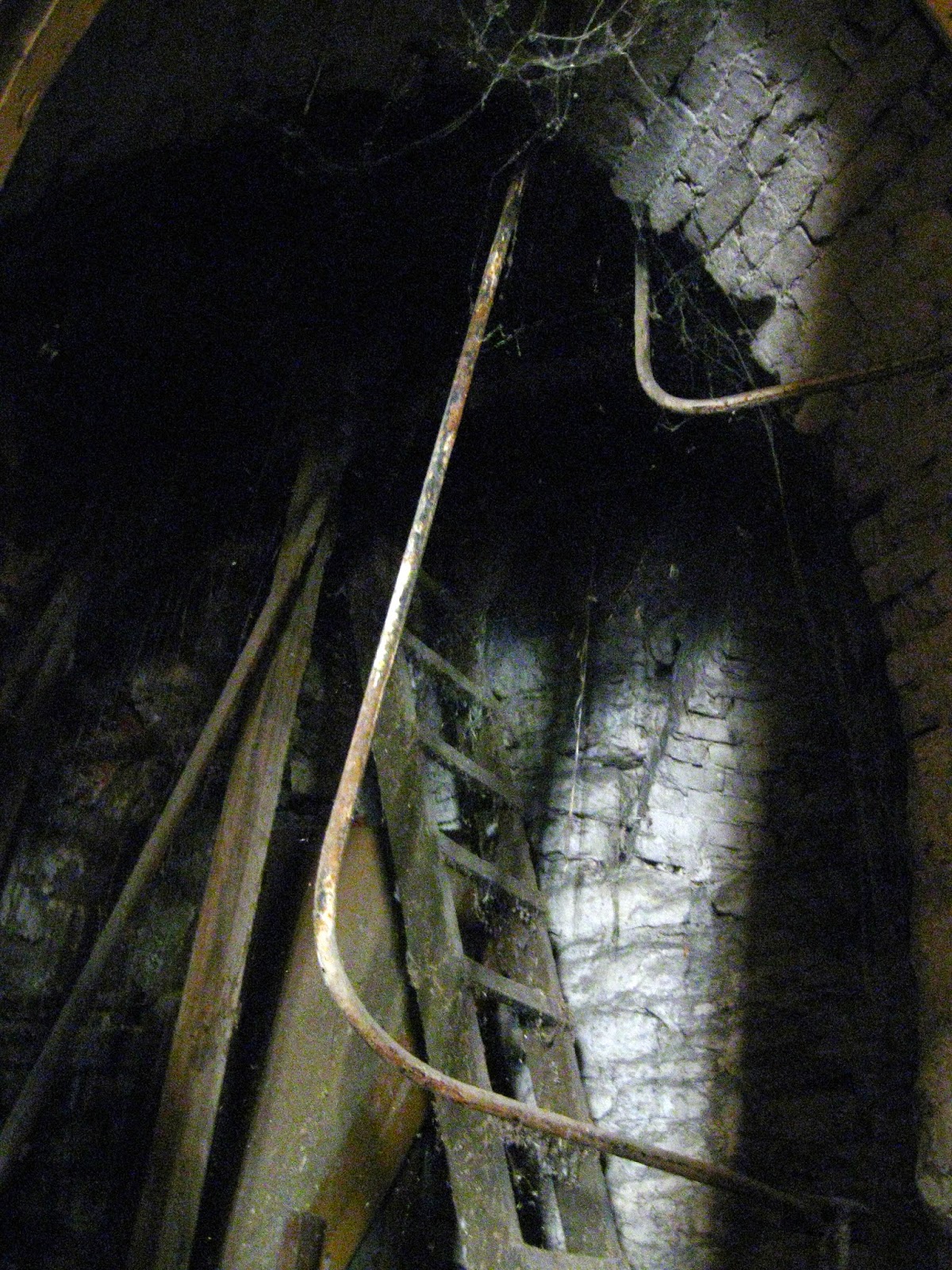 Better view of the horror, via flash: 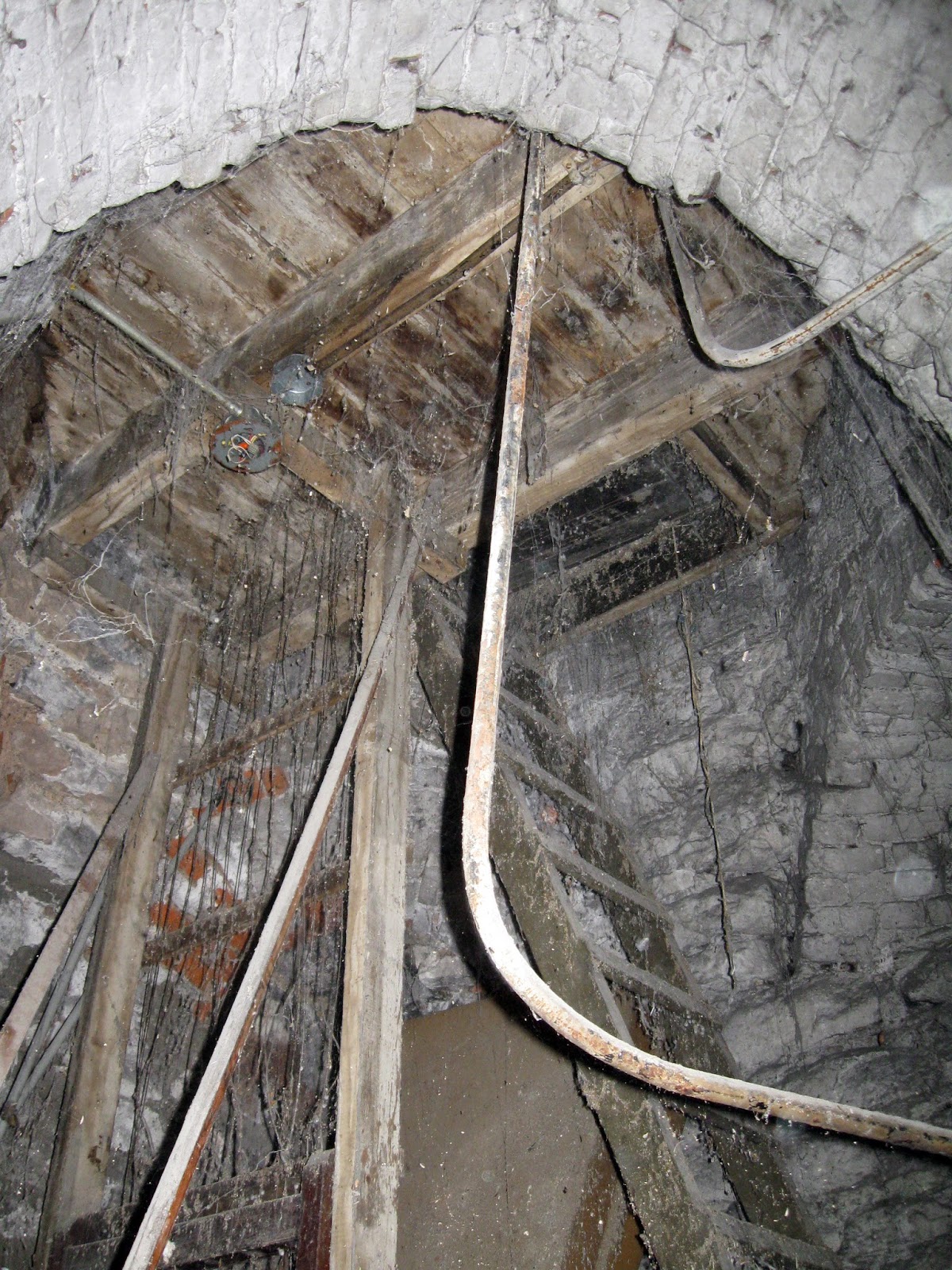 Oh well, maybe some other time. 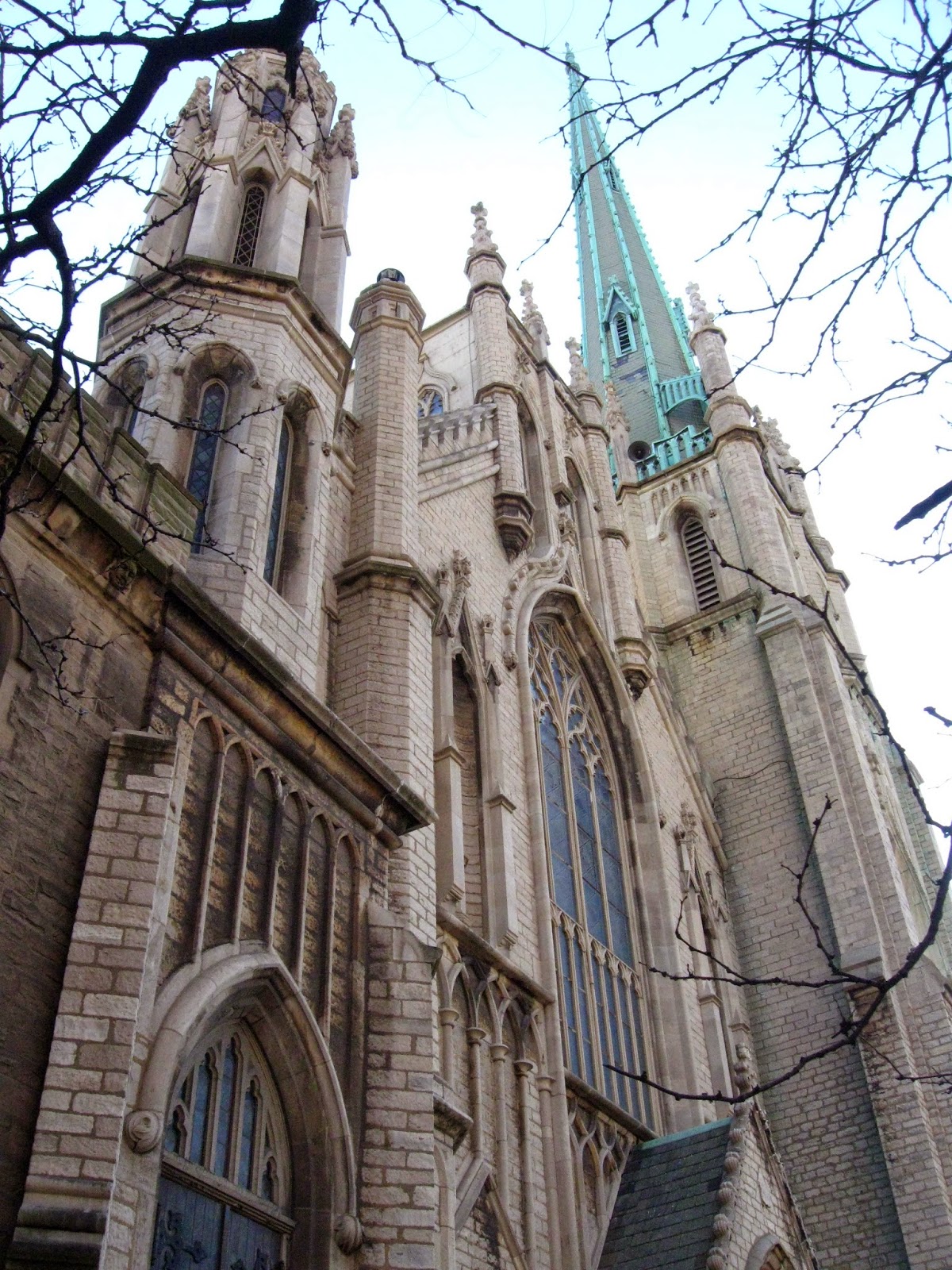 On a side note, recently the supposed smugglers' tunnel leading from the basement of Tommy's Bar on 3rd Street was investigated by archaeologists, who have suggested that the blocked-off tunnel may have once connected to the basement of Fort Street Presbyterian. Here is my photo of that tunnel: 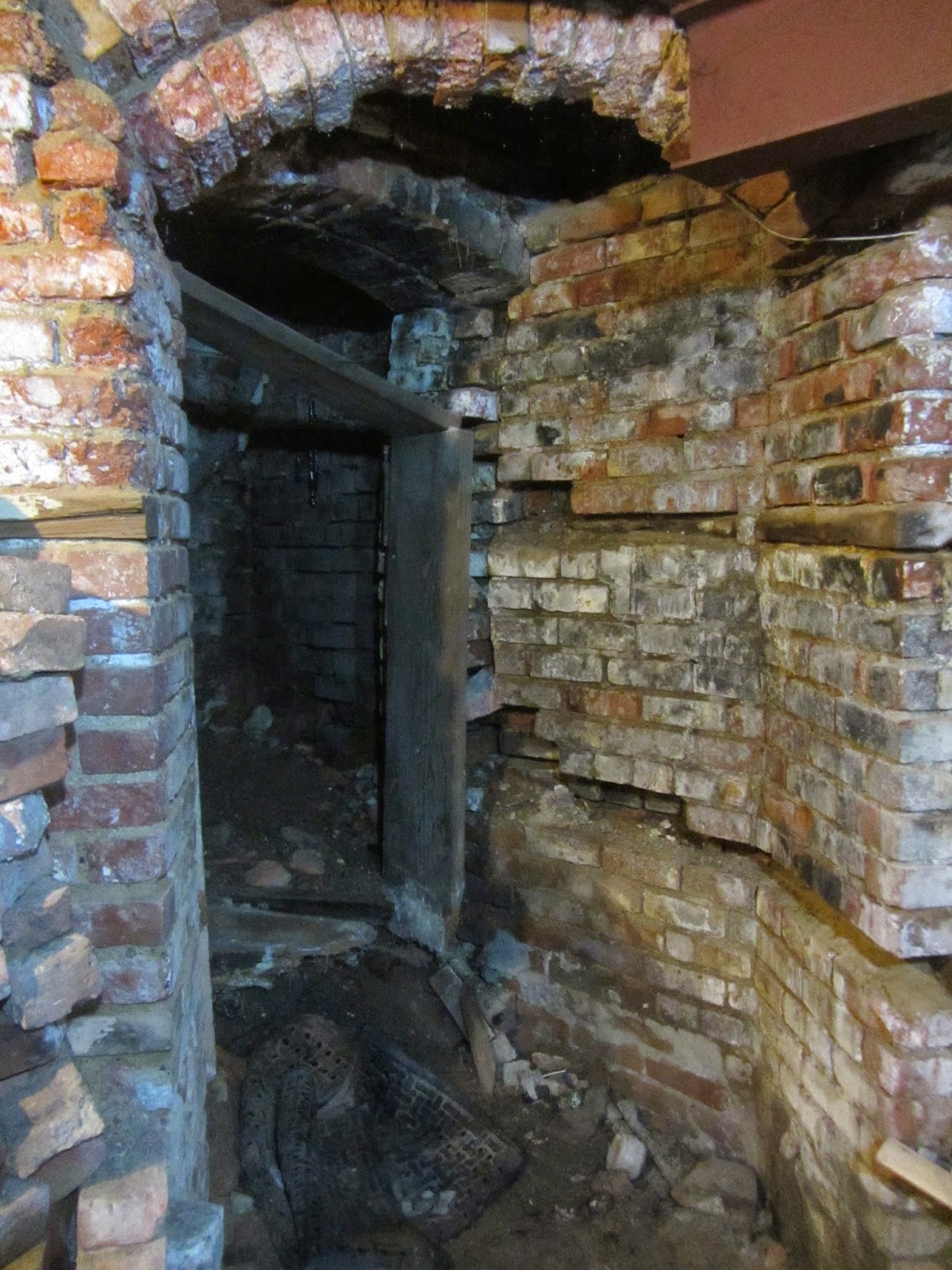 *I recently learned via conversations with Jeff Morrison, author of the new book Guardians of Detroit, that there are in fact other grotesques present on the church, but they are not easy to find.