Cruising down Hines Drive always took me past this weird old one-room schoolhouse next to Nankin Pond, which I found unique because it had actually spawned a good-sized 1960s-era elementary school off the back of it. It closed down eventually and stood empty for awhile, leading me to believe that I might be able to sneak in there soon. Then one day I noticed, to my horror, that demolition had started. 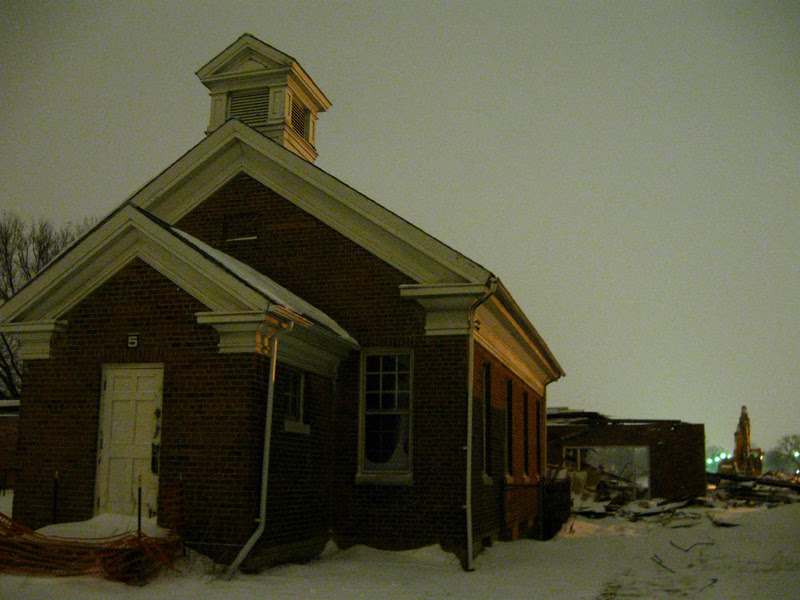 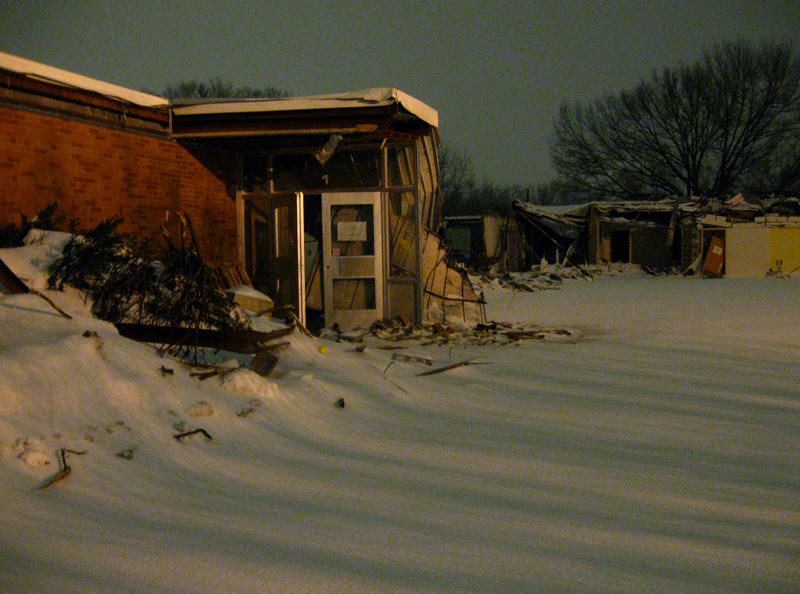 So in I went, hurdling over knee-high drifts of icy snow into the shredded guts of the modern school, as the waving tree branches cast wildly moving shadows from the pale streetlights across the powdery debris fields. 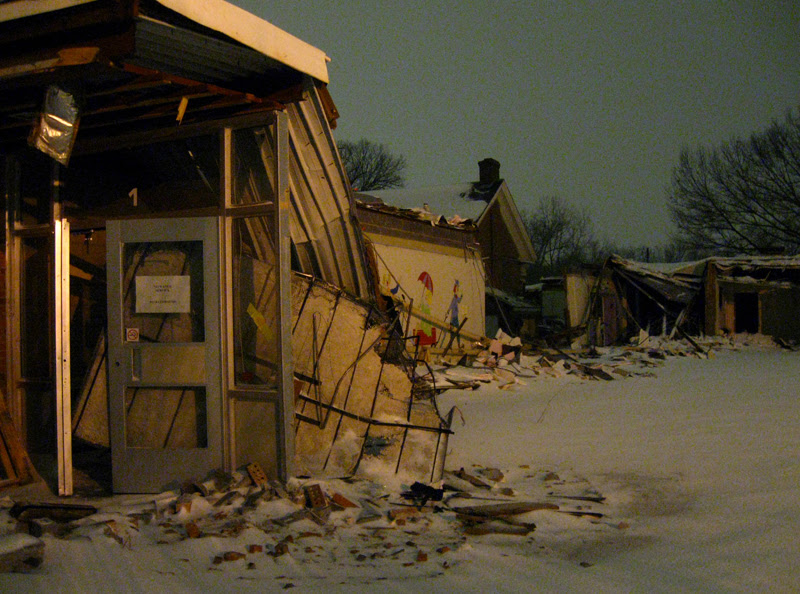 The scene was just plain eerie...and was only enhanced by the fact that I had already been out at the bar drinking all night by the time I decided to attempt this half-baked plan. 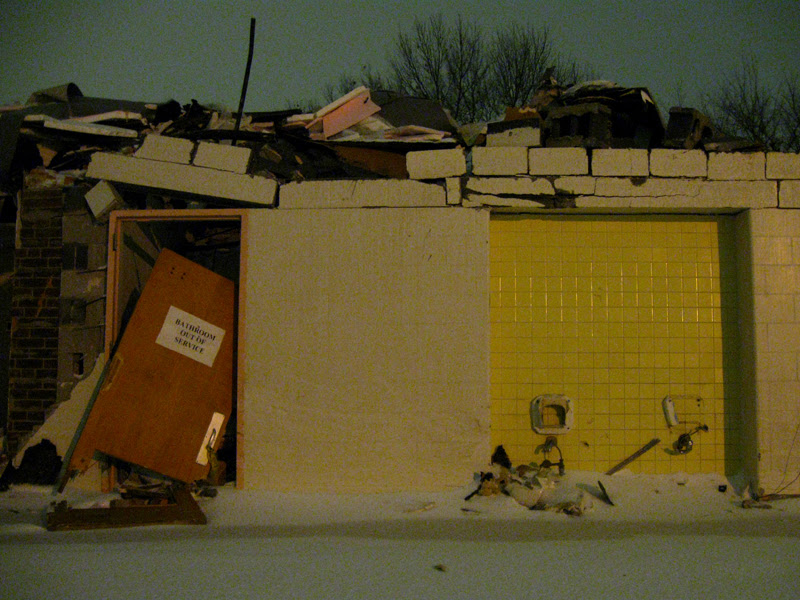 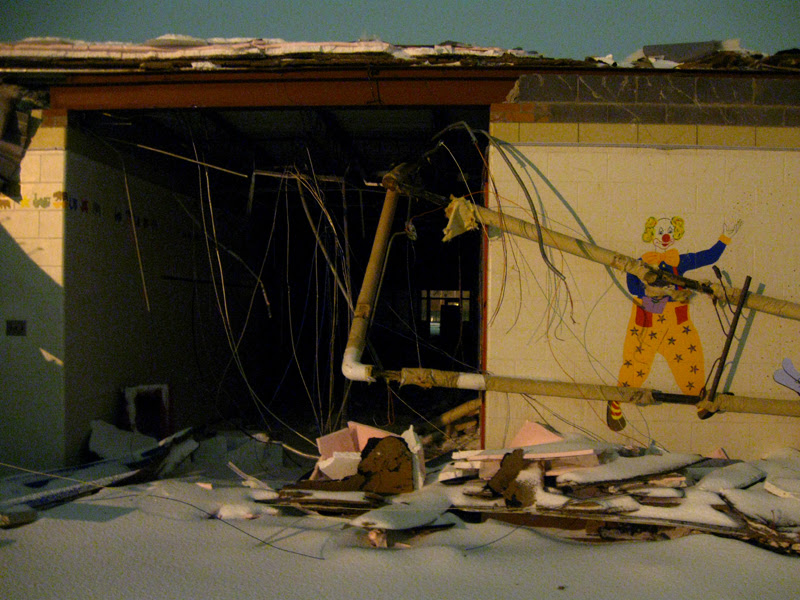 Approaching the rear of the old school, hoping to find a way inside: 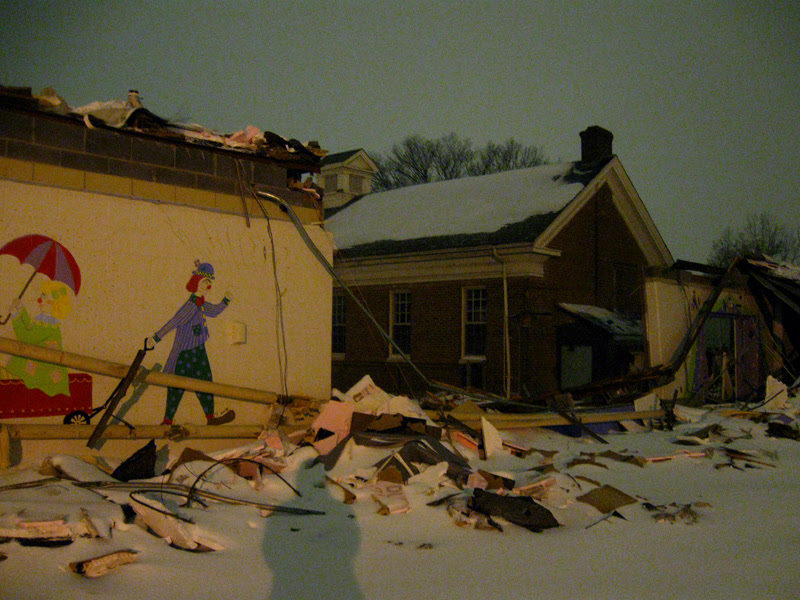 As it turned out, this one-room schoolhouse--the Nankin-Mills School--was not nearly as old as I suspected; but it was much more historic than I had counted on. According to the book Westland by Daryl Alan Bailey, this structure was built in 1937 by none other than Henry Ford, to replace the old c.1856 Perrinsville Schoolhouse at 31755 Cowan Road, which still stands today and can be seen from Warren Road.

Ford had this school built to accommodate the children of his Nankin-Mills plant workers, which was part of his Village Industries. Ford went as far as to model this school after the old Perrinsville School, and even rehired Mildred Harris, the teacher from the old school, according to Bailey. The old Nankin-Mills still stands across from the school, a gristmill from the 1860s that Ford converted; for some reason, Henry Ford fetishized old mills and schoolhouses, and just about anything that reminded him of the nineteenth century way of life that, ironically, his industrial inventions were in the process of wiping out entirely. Today the Nankin-Mills plant is open as a visitor center and history attraction. 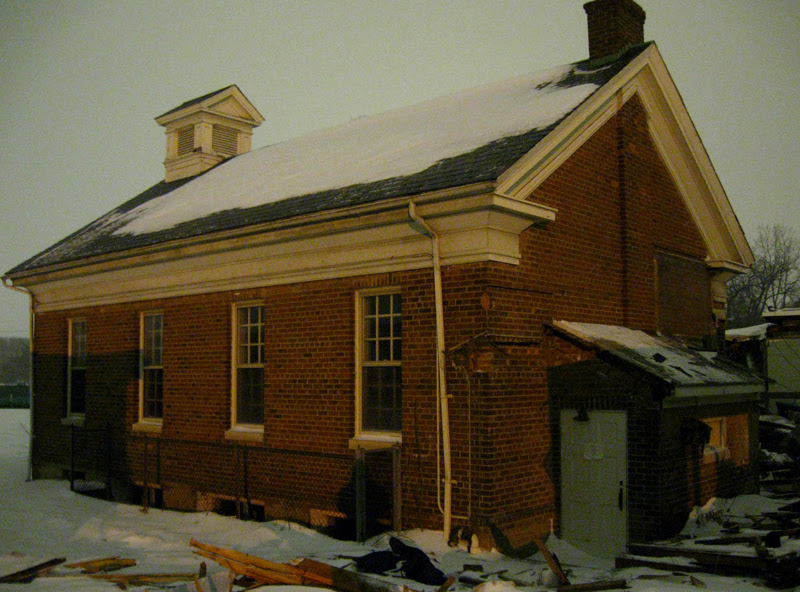 Happily, I found a way inside the old school that didn't involve getting maimed.

The main differences between this schoolhouse and the pre bellum one it replaced were the addition of electricity, plumbing, modern heating, and a basement. The desks also had swivel chairs, but true to Fordist nostalgia, the building itself could've fooled anyone into thinking it was actually built in the 1850s (myself included). Unless you are really good at identifying brick types. 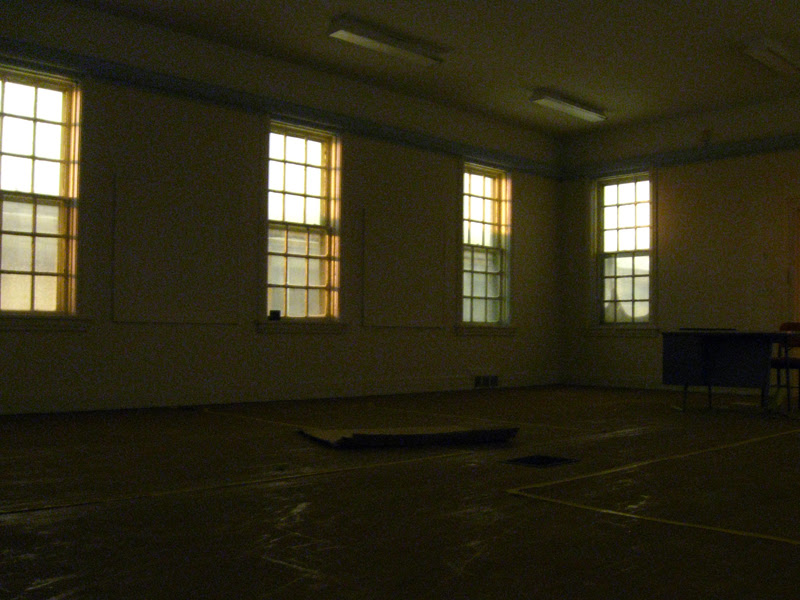 Daryl Bailey goes on to write that once on a visit to this school, Henry Ford's wife Clara ran her white glove along a windowsill and it got coated in dust. According to Bailey she left the glove there on the sill as a reminder to the janitor--who was a full-time Ford employee--to keep the building clean. Yikes. The fastidious Henry Ford could not abide by dirt or any kind of uncleanliness whatsoever, and I can only imagine what would have happened if Henry himself had found that dust.

Unfortunately there was nothing left inside the schoolroom, so I went downstairs. There, I found that they had apparently built a tunnel at one point between the old and new sections of this school: 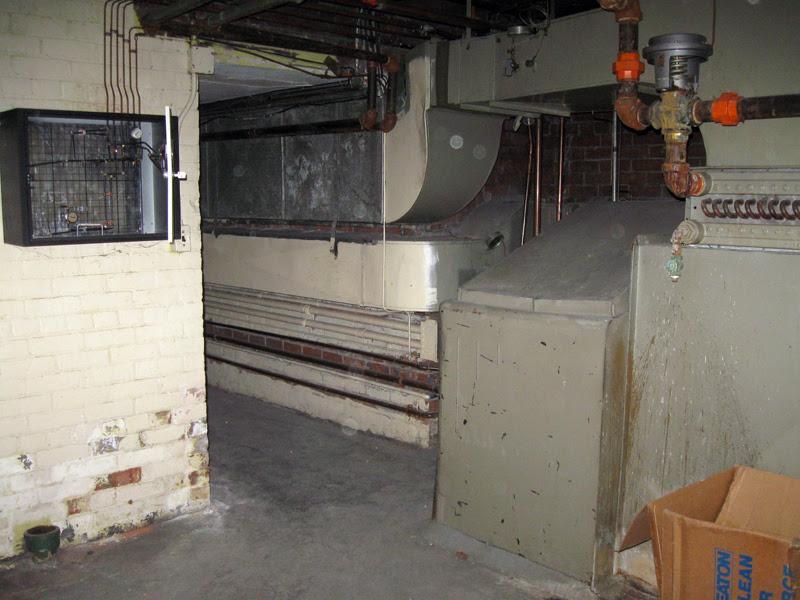 On one wall of the brick foundation was a small fireplace: 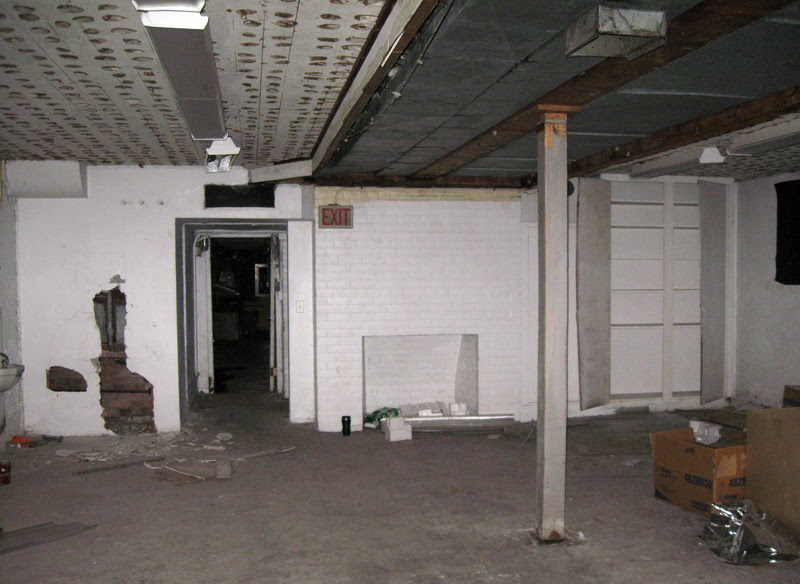 Henry Ford sold this school to the Nankin Mills school district for $1 in 1946, two years before he died. According to a recent article in the Observer, the modern add-ons to it began around 1959 and Nankin-Mills School was renamed the Perrinsville School. Creative. 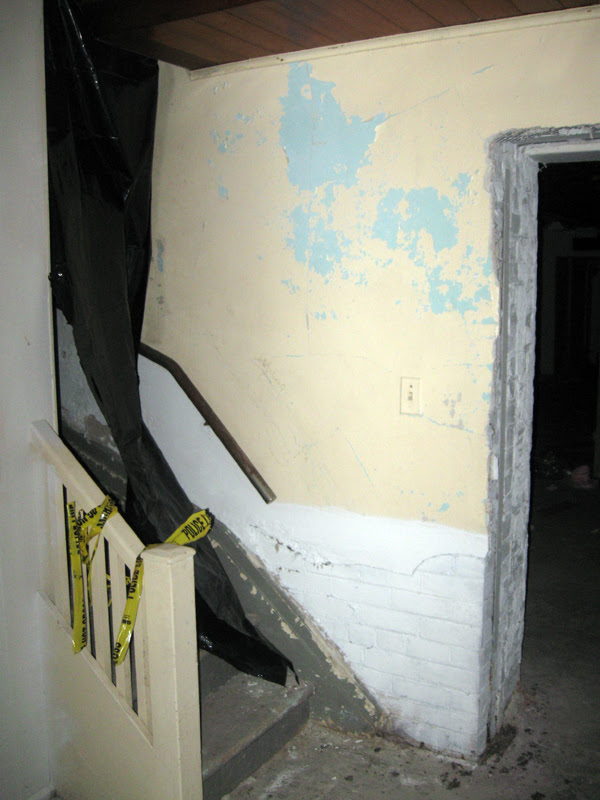 Livonia Public Schools acquired the building in 1969 when the district boundary lines were redrawn. I'm not sure what function the old schoolhouse played as part of the new complex, but the elementary school continued operating until 1982, when it housed several Livonia Public Schools departmental offices until 1998. It was rededicated as an "early childhood center" at that time, but closed for good in 2008. 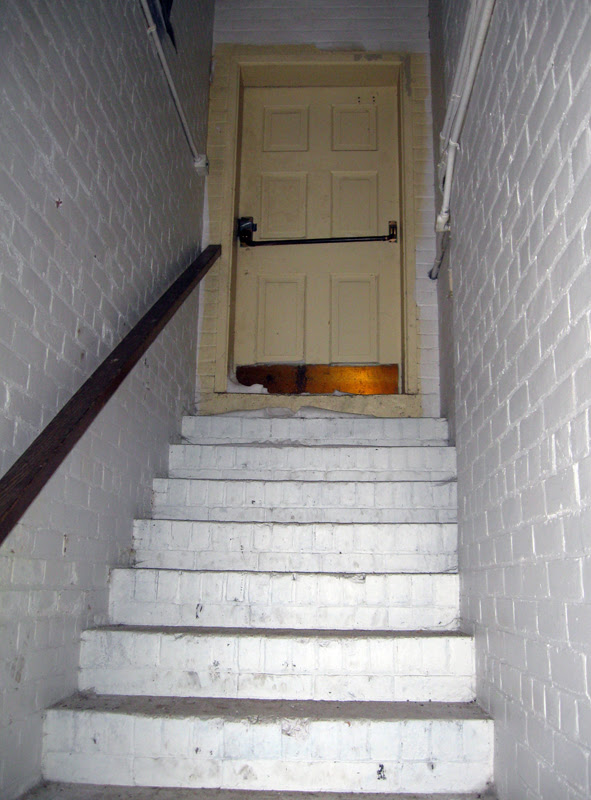 This one-room school building was recently purchased by Greenmead Historical Park in Livonia, who have plans to move it to their site on 8 Mile Road. Unfortunately, the plans do not include taking this fabulous brick basement, which will be filled in. Personally, I really wish they would just leave the damn thing where it is. 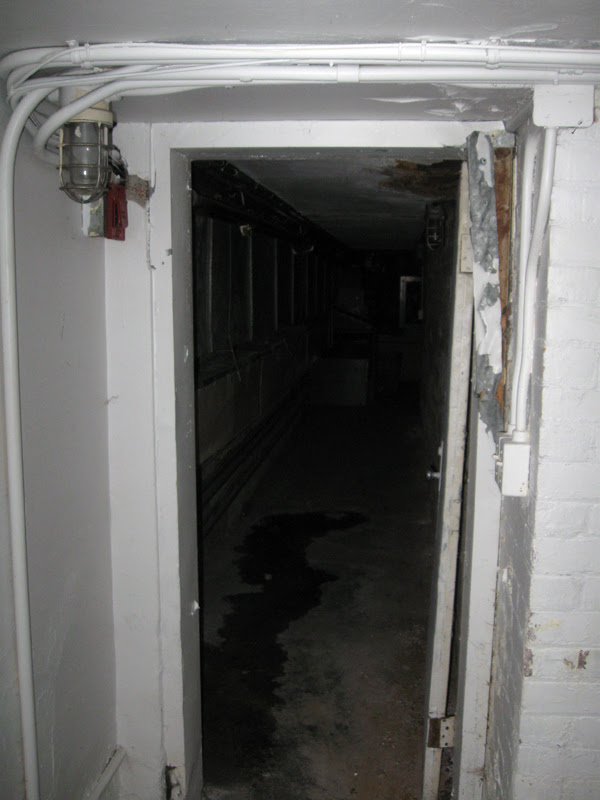 Inside the small gymnasium of the modern school, I could hear the bitter winds still raging outside: 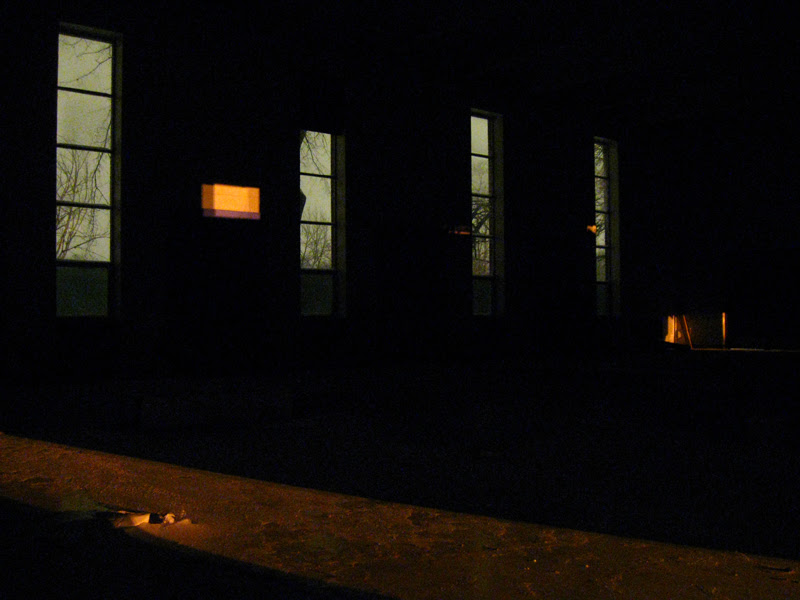