Coloring Outside the Lines

If you've ever cruised through Flint, Michigan and looked up from the expressway to see that big old abandoned school with its perpetual "FOR SALE" sign that was visible at the I-475 / I-69 cloverleaf, you were looking at the Clark Elementary School. 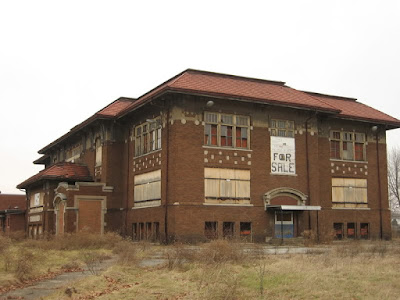 The school stood at 1519 Harrison Street, was built in 1912 and closed by the Flint School District in 1971, though I can't imagine it has been sitting vacant all this time without having some other use in the meantime. 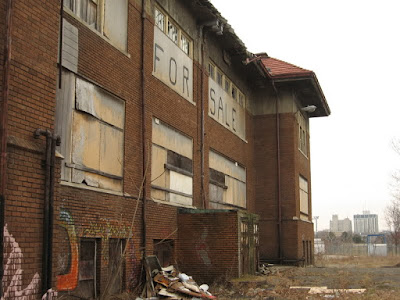 A book by the Genesee County Historical Society says that the first Clark School was built in 1878 and named after John Clark, a local druggist and doctor who worked at the nearby Michigan School for the Deaf (which I visited in an older post). Mr. Clark was also considered the "father of the public school system in Flint," according to the book.

This bigger, more modern school building replaced the 1878 schoolhouse in 1912. Supposedly the architects "realized they had made a mistake" when a structural support was found to be obstructing the middle of the gym upon its completion, making it a little hard to play basketball. I guess I didn't actually make it into the gym to see whether they corrected this or not. 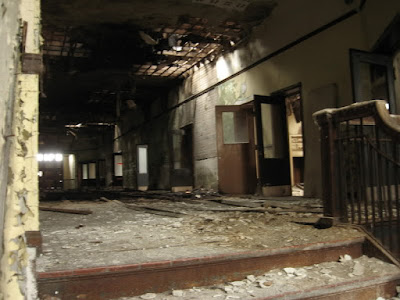 Since Flint's population surged with the arrival of mass production jobs at General Motors much in the same way that Detroit's did, the Clark School adopted "units" of 300 children each to alleviate classroom overcrowding. These were located on Lippincott and Pingree Street, near Dort Highway. 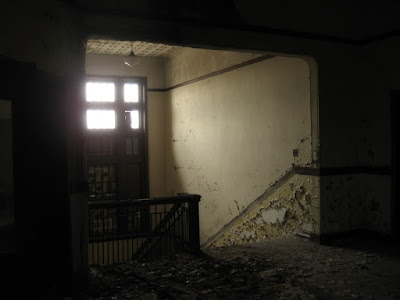 Though its student body was a racial mix by the 1930s, Clark School was almost exclusively populated by black students through the 1950s to early 1960s. The c.2015 book Demolition Means Progress: Flint, Michigan, and the Fate of the American Metropolis by Andrew R. Highsmith talks about segregation in Flint's public school system, and explains that by gerrymandering district lines Flint school officials were able to maintain the white exclusivity of the nearby Pierce Elementary School while keeping blacks at Clark Elementary. They did this even though some African-American students lived much closer to Pierce. 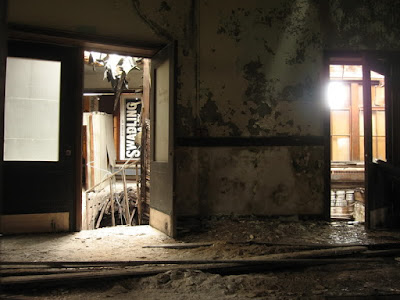 As I discussed in a few older posts, the Detroit Public Schools was notorious for the exact same practices. Though undoubtedly, if the Flint school board had not done this there is a good chance that white parents would have thrown a fit if their children had to go to school with blacks anyway. 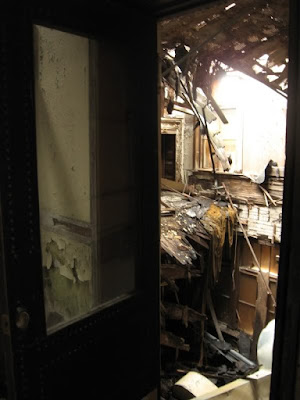 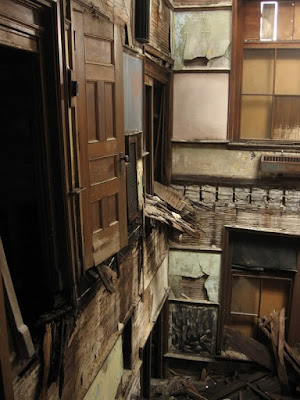 Not surprisingly, the aging Clark School was decaying and overcrowded by the time Pierce School was built, but the board still went out of their way to make sure that white students were allowed to transfer to the new school, while requests from black students were denied, Highsmith wrote. Apparently the school board redrew the district lines every time a black family moved onto a white street.

Highsmith said that while this institutional racism affected all of the schools in the district, it was the most pronounced here between Clark and Pierce Elementaries. 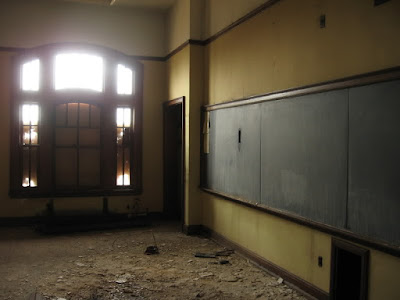 The austere building across the street from the Clark School was the Golden Leaf Club, a lounge that was legendary among Flint's African-American community. It was founded in 1921 and has remained in business ever since; a good blog at flintexpats.com tells much of its colorful history. Sammy Davis Jr., Dinah Washington, and Malcolm X were among some of the big names that have graced the Golden Leaf with their presence. 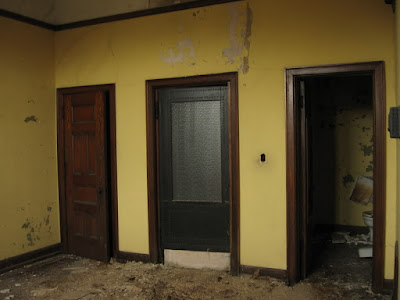 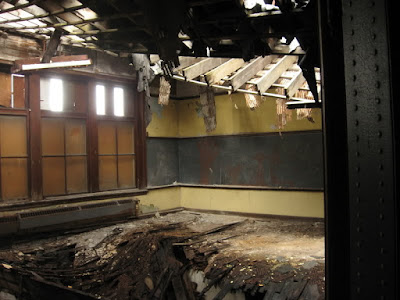 In fact I think some of the Golden Leaf patrons might have been eyeballing me while I was standing outside taking these photos—since there is literally nothing else on this street to look at besides the club and the abandoned school, I'm sure they've gotten pretty tired over the years of people messing with it, painting it with graffiti and such. On the bright side it sounds like the Golden Leaf is no longer "members-only," and allows anyone to attend their musical performances. 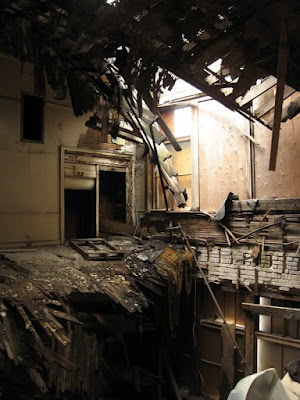 As you can see the damage in here is pretty epic, and I'm starting to think that maybe this school has sat abandoned since 1971? 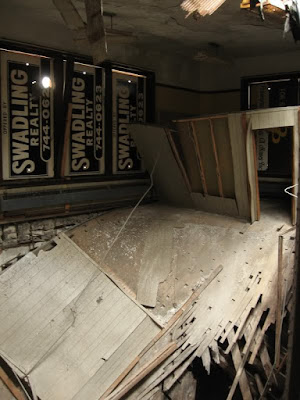 Either that or a more recent fire opened up the roof and allowed total water infiltration to rot the structure to the core. 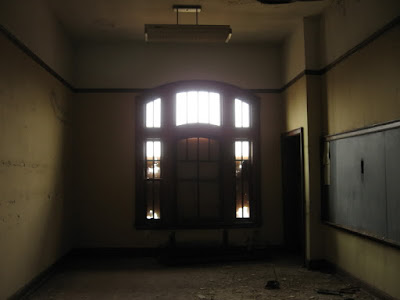 There wasn't much of it left that was even viable enough for me to walk on. This next shot was taken from the basement, and from there you can see almost all the way out through the roof: 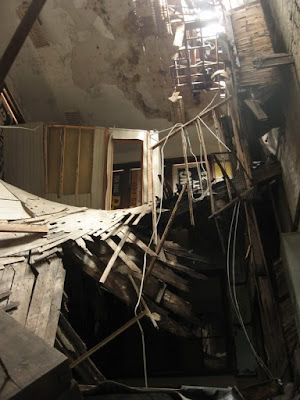 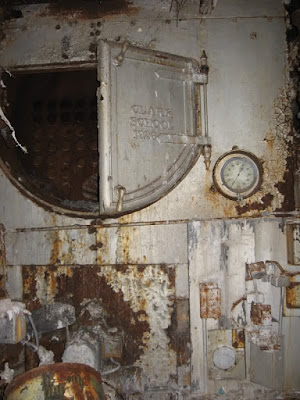 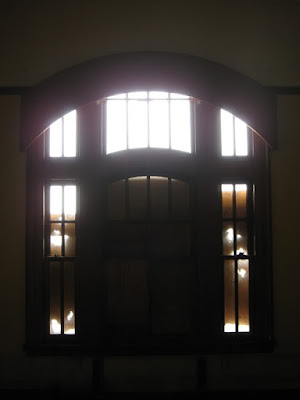 According to an article at mlive.com, the Genesee County Land Bank demolished the school in July of 2014, using $406,200 in Michigan Blight Elimination Grant funds. "The money is part of a settlement between the state of Michigan and various financial institutions stemming from improper handling of mortgages leading to the financial crisis in 2008," according to MLive. Twenty other such commercial demolitions were scheduled to be carried out with the same funding...wow, I didn't realize there was still that many buildings left standing in Flint.