The Detroit Public Library is celebrating its 150th anniversary in 2015. This will be my third and final post about a former DPL branch library in the city this year.

This unassuming building in Detroit's Islandview neighborhood is the John S. Gray Branch Library, which I visited on a suitably gray foggy day. Even the bricks that the building was made from were gray. 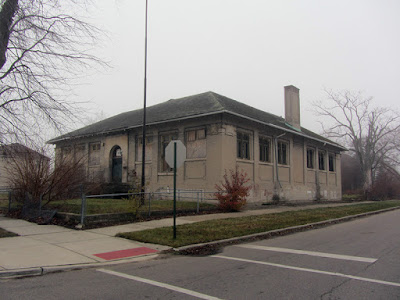 Detroit's historian, Clarence M. Burton, writes that John Simpson Gray was born in Edinburgh, Scotland in 1841. His family emigrated to Wisconsin in 1849 and established a farm before moving to Detroit in 1858. Young John Gray got his education here to become a teacher in Algonac, Michigan, but he moved backed to Detroit a year later to join the toy store business his father had started.

In 1861, Mr. Gray started out on his own business venture, a candy manufacturing business named Pelgrim, Gray & Co., at 143 Jefferson Avenue, which soon became Gray, Toynton & Fox, and moved to Woodward and Bates Street. By 1881 this candy company was the largest in Michigan, employing 200 people at its peak. Gray was reportedly also something of an abolitionist according to Burton, though it is not stated whether he served in the Civil War. His office was at 37 E. Woodbridge Street. 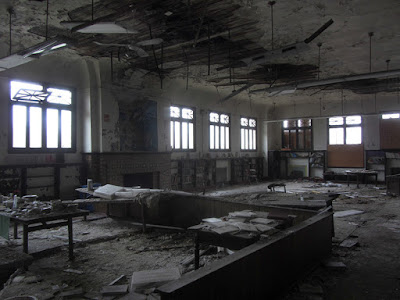 John S. Gray then began investing in northern Michigan lumber and Detroit banks. Despite being Scottish, by 1894 he was president of Detroit’s German-American Savings Bank, which (as I detailed in a different post) soon became the First State Bank. He also served on the Board of Library Commissioners, which is how this building came to be named in his honor. Ren Farley notes that "quite a few" prominent Detroit businessmen served on the Library Board in those days. Gray's term on the Board of Library Commissioners lasted from 1897 until at least 1903; he was its president in 1900. 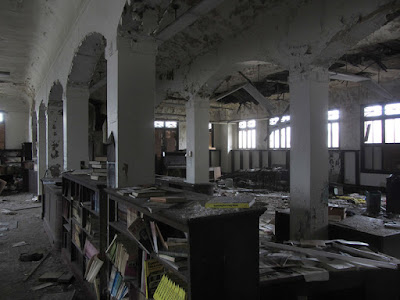 Mr. Gray also personally bankrolled the birth of the Ford Motor Co. (the first iteration of it that was successful anyway). Though he was reportedly sure the venture was doomed to fail, Gray was convinced in 1903 by his nephew Alexander Malcomson to break off a $10,500 investment to get that young punk Henry Ford started up. Gray ended up being the first president of Ford Motor Co. as well, until his death in 1906. Henry Ford eventually paid Gray's estate $25 million after buying back his shares in 1919.

His son Paul R. Gray continued his legacy at the helm of the National Candy Co., as vice president of the Gray Motor Co. and the Knock-Down Mfg. Co., and he was a member of the University Club and Detroit Boat Club. As far as I can tell John S. Gray's family was not connected to Edward Gray, the real-estate man who created Gray Haven. Coincidentally enough, Edward Gray also had deep ties to Ford Motor Co. as an engineer when he helped Henry Ford develop the first moving assembly line for the Model-T. 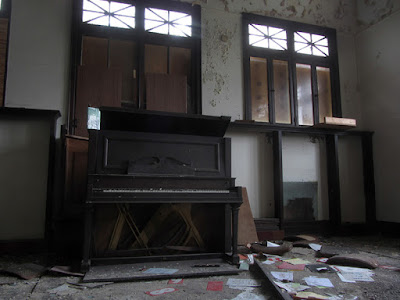 The historical document Detroit Public Library Branches, 1914 says that this structure was built in 1913, designed by prominent Detroit architects William Malcomson and William Higginbotham, who also designed 75% of the Detroit schools built prior to 1923, including the original Cass Tech and the building we now know as Wayne State's "Old Main." They also designed landmark churches, and Henry Ford's former home at 140 Edison Street.

Although the Detroit Public Library Commission was getting money from the Carnegie fund to help build branches at the time, this one was funded entirely by the city at an original cost of $9,750. 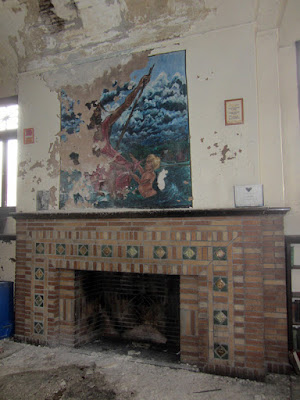 The mural above the fireplace here appears to depict a scene with Poseidon, the Greek god of the sea, and Triton, his messenger (though forgive me if it's been like 20 years since I read Bulfinch's Mythology). 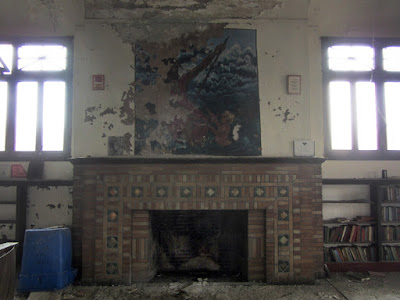 The wood trim and shelves in the library are stained oak, and these appeared to be Detroit's famous Pewabic tiles around the mantel. 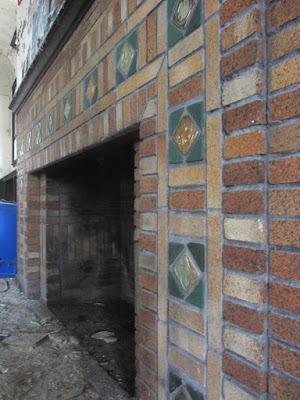 There was a 400-seat auditorium in the basement, though it was now totally devoid of any interesting character or flair, so I didn't bother with a photo. Basement auditoriums were another feature common to Detroit branch libraries of this era. There were a lot of old donated clothes on the stage that had been left behind. 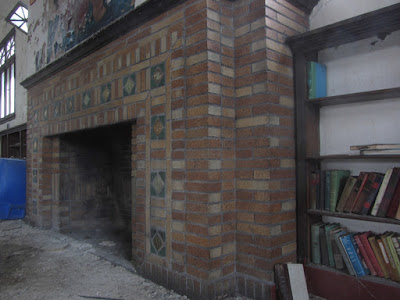 The structure is fairly well damaged in spots, but overall still salvageable. 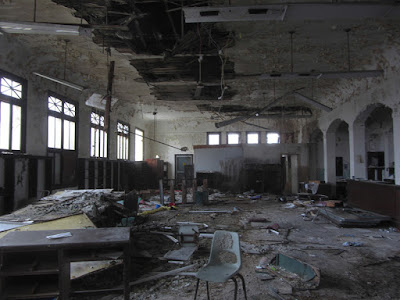 During the 12th annual meeting of the Michigan Library Association, held at the Fellowcraft Club on October 10th, 1902, Mr. Gray was given the honor of making the opening address on behalf of the Detroit Library Commission. In remarking on the development and proliferation of public libraries in America in those years immediately following the establishment of the Carnegie libraries, Mr. Gray proffered a statistical comparison of Detroit's present population increase versus its increase in book readership over the same ten years:

Those are pretty heartening figures, given today's climate of dullardly ignorance and illiteracy. 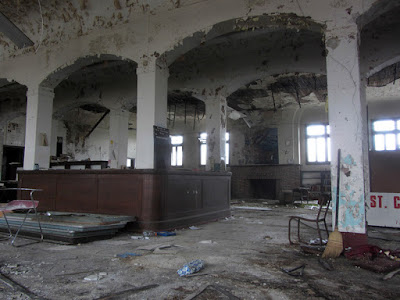 You may have noticed that this library's interior floorplan was very similar to that of the Hosmer Branch, with a double row of columns starting at the main entrance and separating the building down the middle into two halves, which would have been filled with tables and chairs for patrons, with clerical offices in the rear. The main bookshelves were along the outer walls while the circulation desk was also placed in the center of the room so that the librarian could have an unobstructed view of the stacks in all directions. I read somewhere that this was done in the old days to allow the librarian to more easily monitor the room to make sure no one was stealing books.

I guess that was more prevalent back when books were more valuable, and they were still a primary source of entertainment--kind of like how people used to steal CDs years ago, but now you can't even give them away. If only book theft was still a problem today--at least then we could say that people were actually reading! 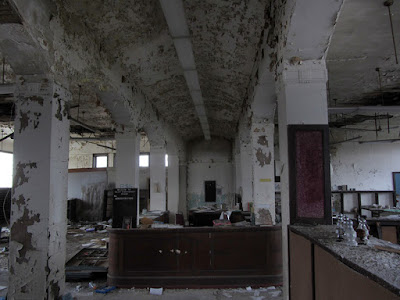 I suppose the idea of the building being divided into two equal halves could also hearken back to ancient Greek or Roman civic architecture, where everything had to be in geometric balance. 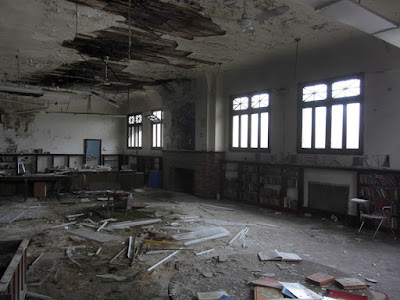 As an example of community activity and involvement at the library back in the old days, I found a blurb in the Detroit Public Library's newsletter Library Service in 1920, which told of an exhibition of 20 photographic Salon prints that was put on display here. The prints were the work of Dr. Oscar Fisher who lived at 507 Field Avenue (not far at all from this library), and would be displayed during the first week of May. His work had previously been shown in Los Angeles, Toronto, and Pittsburg, as well as appearing in some magazines. 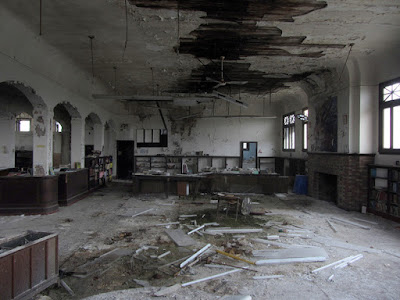 This building was abandoned in 1975 and the John S. Gray Library was moved to the Butzel Family Center on Van Dyke Avenue, though it was still abolished by the DPL a few years later. 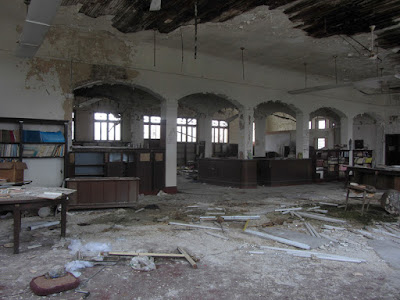 This building didn't stay vacant for long before it was moved into by a new entity, "St. Christopher's House," which was listed in a 1977 telephone directory. They were a community outreach program operated by a nearby church, and provided services like helping disadvantaged people find housing, clothing, and food, as well as mental health programs and treatment for substance abuse.

An entry on nonprofitlist.org says that St. Christopher's House also provided ministry and self-help to all who seek it. On the mantel I found a certificate that indicated they still occupied the structure in 1998, and another listing showed them active as late as 2001. 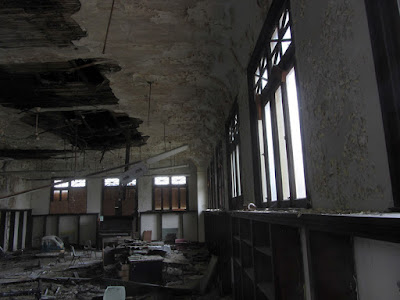 I wonder if the Bobbsey Twins ever visited Detroit... 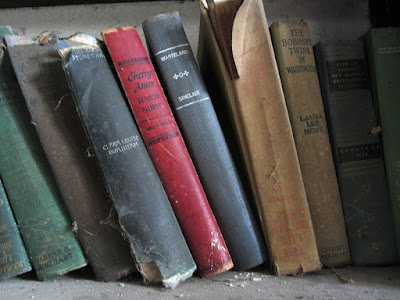 "The Bobbsey Twins in Detroit" would likely be a most unfortunate tale, of potentially Shakespearean-caliber irony and tragedy. Reshelve that one from juvenile to adult fiction. 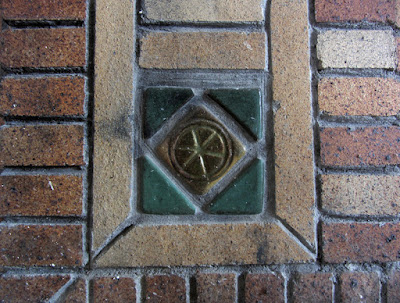 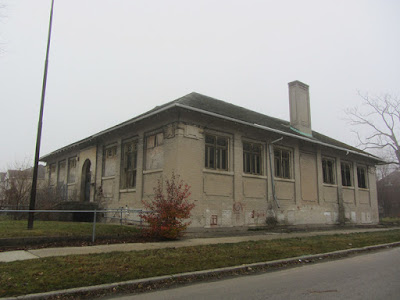