My exploring partner "Chisel" and I decided to scope out some stuff along Detroit's east riverfront one day, and we ended up in an industrial wasteland from the turn of the century that pretty much still remained in that time period. It seemed like a scene out of H.G. Wells' Time Machine, possibly the most desolate landscape I had yet found in Detroit. Freight rails that hadn't been used in at least four decades appeared in the street or sidewalk here and there, intersecting it or dead-ending at the wall of a newer building, or for no reason at all.

The street ended at an open gate across from the Detroit Gray Iron Foundry, which seemed to lead into a wilderness of sorts. The sign on the fence warned something about hazardous materials, so we drove right in with Chisel's car, being wary only of broken glass and nails. Here in the parching, late July sun we saw a near mystical change in landscape...once we crossed the threshold of that gate, we left behind the grimy industrial nightmare of Detroit and found ourselves in another realm entirely. It was like the scene from The Wizard of Oz where Dorothy steps out from the drab world of black & white to one of eye-popping color. 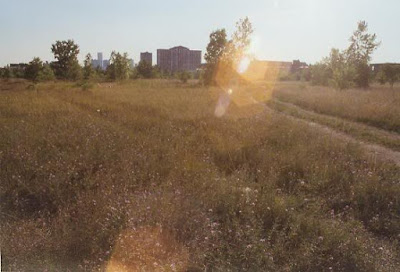 To our left was a crumbled ruin of what was perhaps once a small factory, apparently built over 100 years ago judging by the architecture, but everything else was a barren prairie; green grasses and gentle hills stretched out as far as the eye could see. The city we had just been in the middle of had disappeared, the paved street had turned to a crude dirt two-track, and we now found ourselves in the middle of a wilderness that resembled the Great Plains. At times the grasses were so high that unless we stood on the car's doorjamb, we could not see any of the tall buildings that loomed in the distance, and the only other sight was that of the Detroit River off to our right. The constant white noise of traffic and other city sounds had abruptly ceased, and were replaced by the swishing of wind in the weeds and the rattling of cicadas and grasshoppers. 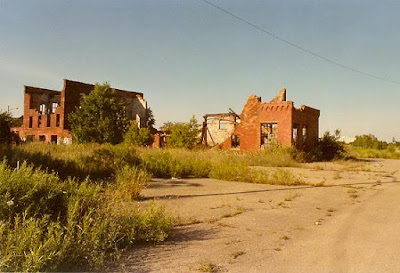 According to the 1922 Sanborn maps of this site, these buildings were not associated with the Uniroyal Tire plant, as is popularly believed; the Uniroyal parcel started about 75 yards past this building. These ruins were part of the Detroit City Gas Co. Station "B," which stored large amounts of natural gas for public lighting. This building contained a machine shop, carpenter shop, locker room, and laboratory in its taller portion, while the shorter (collapsed) portion housed three engines and three gas exhausters according to notes on the map, probably used for pumping or pressurizing the gas. There were also two large gasometers on the opposite side of this building, as well as a handful of smaller ancillary structures and railroad sidings.

Another building of equal size and shape to this one used to sit perpendicular to it as well. Further east into the prairie, just before the Belle Isle Bridge, once sat the famous and venerable Detroit Stove Works. Even the original Oldsmobile plant used to stand here before burning down in 1901, giving birth to the classic story about rescuing the prototype "Curved-Dash Runabout" by pushing it out the doors of the burning plant, and that model going on to become the most popular car in America. All of this went on before a Uniroyal tire was ever made here. 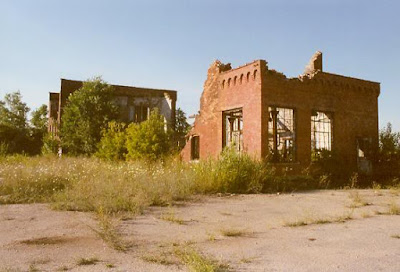 We stopped and got out to investigate the collapsed heap of red brick that obviously dated from turn-of-the-century Detroit, and had probably burned down at least five or 10 years ago. I slowly climbed the ancient pile and thoughtfully combed it for anything of interest, or which might tell some story. Only a few walls remained standing; the rest had collapsed inward, almost as if the overburdened fire department had never managed to respond to this building's demise. Trees and bushes had long since begun to sprout up through the wreckage.

As I stood atop the debris and looked out in all directions away from the ruin, I still could see very few signs that we were still in fact in the middle of one of America's largest cities, and not lost in some godforsaken prairie. My brain had just switched over from "city mode" to "camping mode," in fact. The only living things I could see or hear were the seagulls that flew near the river. Eventually a ship went by, and I also noticed the top of the RenCen peeking up over the green horizon like a sentinel...so far away it seemed. From all we could see, this is what it might have looked like to Antoine Cadillac when he first landed here and founded Detroit over 300 years ago. 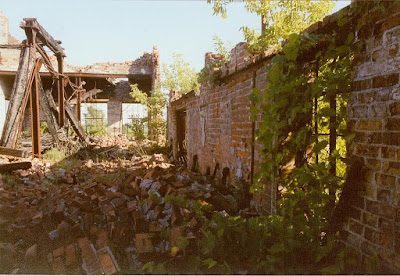 Since you might have come here expecting some Uniroyal Tire history, here it is. According to The Technology Century, by the dawn of the 1900s there were four major rubber companies: Firestone, Goodrich, and Goodyear in Akron, Ohio—and the U.S. Rubber Co., which started in Connecticut in 1892 and would eventually become Uniroyal. Ferris E. Lewis's book Michigan Yesterday & Today starts the story in Chicago however, with the smaller Morgan & Wright Co., which became world-famous for making double-tube bicycle tires. A double tube meant that there was both an "inner tube" and an outer casing. Morgan & Wright also had a small factory in Detroit, here at the foot of Bellevue Avenue where the mammoth Uniroyal Tire plant would eventually grow. The double-tube style of tire had caught on in Europe with cyclists, and it soon became the standard for the Detroit auto industry.

In 1900 Morgan & Wright Co. became one of the many tire patent holders that the U.S. Rubber Co. were buying up, which was about the time that pneumatic tires were becoming a thing for cars. Previously, motor cars rode on solid rubber tires or on troublesome single-tube pneumatics, so naturally U.S. Rubber saw a new opportunity for the Morgan & Wright product. It was also during that time that the American automobile industry was coalescing in Detroit, so U.S. Rubber moved their production here, where they built onto the existing Morgan & Wright plant and began producing by 1906.

U.S. Rubber quickly became the biggest player in the tire industry, and according to Rubber: An American Industrial History by Quentin R. Skrabec, it also became the biggest producer when it acquired Morgan & Wright and their Detroit plant. U.S. Rubber expanded the plant in 1906 Skrabec said, and it became the largest tire plant in America. This was a good move because automobile production in Detroit would double by 1908 with the advent of the Ford Model T, although General Motors still would make up most of U.S. Rubber's orders for tires (Henry Ford favored Firestone, and would eventually get into making his own tires at the Rouge). 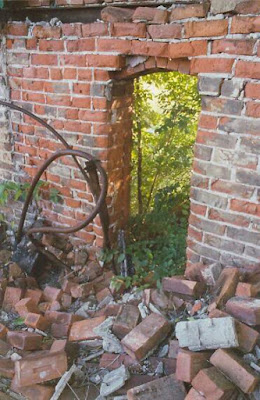 U.S. Rubber were also in the best geographic position out of all the other national tire makers, because they were the only one based in Detroit. They would not always occupy that top spot however, as the big three tire makers of Akron, Ohio would soon fight back. According to The Motor Way, Cadillac contracted with Morgan & Wright to equip half of its total produced cars with their tires for the 1907 model year.

According to the trade publication Electric Vehicles, Morgan & Wright bought more adjacent land in 1917 to expand their plant again, and it was said that at that time there were still buildings from the Michigan Steel Boat Co. standing on the property to be purchased. By the 1920s U.S. Rubber changed their name to the U.S. Tire Co., and in the 1960s, U.S. Tire changed their company name to Uniroyal. As of the 1980s when Ferris Lewis was writing, the Detroit Uniroyal plant was still "one of the world's largest tire plants." You might also recall that one of Detroit's most recognizable landmarks was created by Uniroyal, the Giant Tire on I-94. Lesser known was this wall mural on the side of the plant that interestingly depicted tires in the form of a cornucopia.

The Uniroyal Tire plant closed by 1981 and sat abandoned until it was demolished in 1985. It was so big and so sturdy that it took a year to demolish the whole thing. A good photo on Flickr by Michael G. Smith shows the mammoth plant as it looked in both 1906 and in 1983. Despite being in a prime waterfront location, due to the cost of cleanup the site remained a contaminated wasteland until 2011 when work began on developing the parcel. 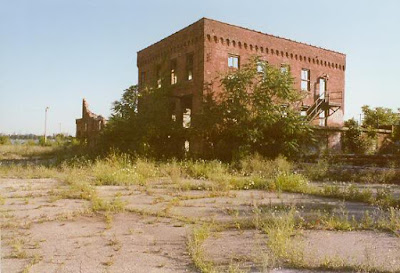 This next building is labeled as a "tool & supply house" of the Detroit City Gas Co., on the aforementioned 1922 Sanborn map, though sadly I didn't bother to go look inside it at the time, being more interested in the natural scenery around us that day. 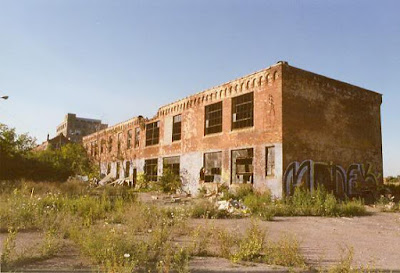 Chisel and I got back in the car and decided to head further down the heavily rutted trail to the east; we bounced and jarred along in our seats and the weeds brushed into our open windows. I was afraid we'd crack the oil pan or radiator on a rock, but Chisel's poor little '91 Taurus kept crawling along. We finally came to the end of the road. It stopped at the edge of the Detroit River, and we got out to investigate the cement embankment. In fact we were able to go out and walk along it for some ways. Trees were growing out of its cracks and there were old nightcrawler tubs littered about, telling us who usually came out here. It was the perfect place to get away–forget Belle Isle...if it's solitude you want, here it is. One might even be able to poach deer back here, and for all we knew people probably did.

Running along the cement breakwall, about ten feet back from the water we noticed what used to be some kind of tunnel, though its roof had collapsed. It was by sheer accident that I noticed it was even there; all that revealed its presence was a glimpse or two of its interior through gaps in the chunks of foliage-swathed concrete that once comprised its roof. It was now more like a trench of fragged concrete salad that had been completely in-filled by grass, weeds, and moss. Saplings shot up from it too, forming a hedgerow along the river. I could not discern its original purpose, though inside I could see that it resembled a typical steam service tunnel. A couple manholes were also to be found amongst the rubble on the forest floor.

Chisel and I eventually left after our quiet, tree-shaded respite with the river to head back to the city, almost for fear that if we didn't soon, our way back would disappear forever. Here was the silhouette of the Detroit Gray Iron Foundry coming back into view: 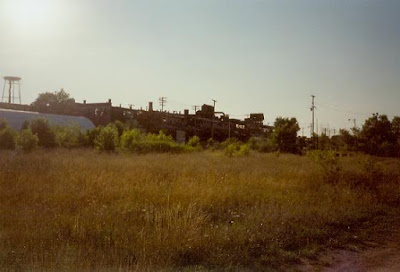 Inching the front tires back out onto a paved street from that wilderness and merging onto Jefferson again was just as uncanny as it had been to enter the strange wasteland. It felt weird, like we had just come back from visiting another planet.

Several years later I did return to this site with a few friends to drink some beers down by the river on a muggy summer's night. This concrete embankment used to skirt around the Detroit Stove Works, and was the one that I believed to have a tunnel or pipe trench behind it: 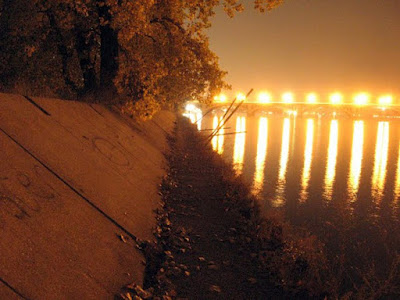 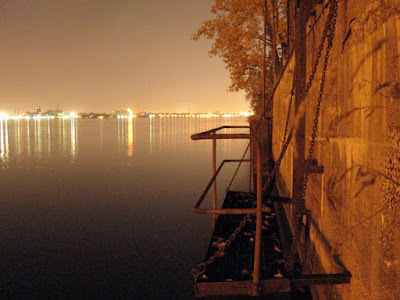