There was a four-story apartment building that we wanted to check out on East Jefferson near the Hannan Memorial YMCA. In fact, it stood directly next-door to Detroit's famous Pewabic Pottery workshop. 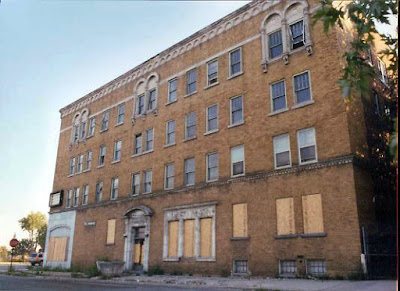 The apartment building was called The Pembroke, and looked like it had been built in 1926 or 1927 if I had to guess. The Sanborn map for 1929 shows five storefronts in this building facing Jefferson Avenue, one of which was a drug store at the time. The apartment entrance was on the east side of the building however, giving it an address of 1409 Hurlbut Avenue. That address brings up lots of Google Books hits in university alumni directories from yesteryear, as well as one from the United Spanish War Veterans Encampment rolls, all of which listed peoples' names and addresses.

Here in a c.2007 Google Streetview image, you can barely see the Pewabic Pottery workshop hiding in the deep shadow of the Pembroke:

The Streetview images also show old signage from a party store called Jones Market that once occupied the storefront.

Here is another photo I found in the DUCP from 1976...apparently the liquor store used to be called the "Sand Bar" (a pun on being close to the waterfront), with a bait shop next-door:

We had to do some pretty awkward climbing through dense bushes to get in, after which we got the feeling that this building was being kept secure to keep it from going to hell and making Pewabic's surroundings look bad. We found ourselves in the courtyard and squeezed in. 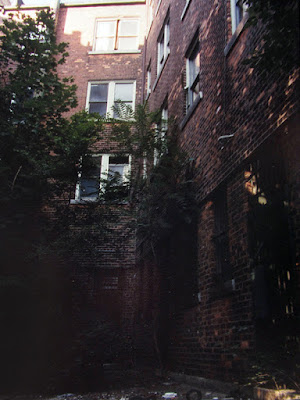 The building had power on–at least in the basement–we noticed, which seemed odd. Other than that, it was a typical apartment building in Detroit as far as I could tell. It was in relatively decent shape, a good candidate for restoration I thought. The interior was not all that exciting or noteworthy, and I had a hard time getting a good overall shot of the lobby. 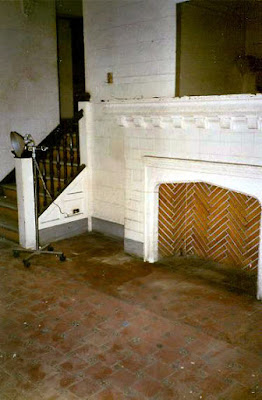 Though that was when I noticed the lobby floor contained small insets of Pewabic tile...which I guess you might expect from a c.1920s building constructed next to a famous architectural tile-maker at the height of their popularity. In fact I'm a little surprised that the Pembroke was not more embellished with Pewabic appointments than this. 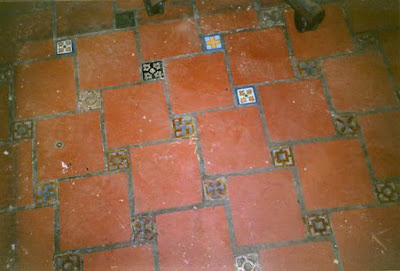 On March 29, 2008, Pewabic Pottery had this building demolished for a gravel parking lot—or so I initially thought when I saw the results. An article at modeldmedia.com explains that Pewabic actually hoped to reuse the Pembroke as a new clay studio building, but it was determined that the building was too large for their plans. So they called the Architectural Salvage Warehouse of Detroit to have it deconstructed as opposed to demolished, meaning that architectural pieces and materials from this building would live on to be reused elsewhere, and Pewabic would build their new studio building in its place once they raised the money. The total cost of the Pembroke's removal was said to be $190,000 including hazmat disposal, site prep, fencing, and landscaping, according to modeldmedia.

The photos I saw of the demolition however seem to show not deconstruction, but a standard tear-down with an excavator toppling the fully intact building, which still had all its windows, doors, and architectural details in place. Apparently there must've been some change of plan, because I don't believe the ASWD's deconstruction team owns any heavy equipment. I hope someone at least salvaged these Pewabic tiles from the lobby before they tore the place down. 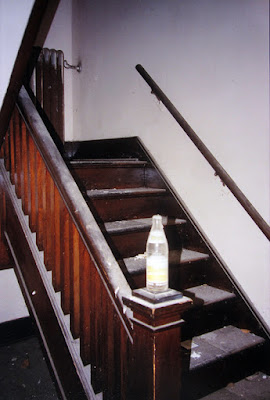 The stairways in here were wooden and beautiful, which caught me off-guard since I was expecting the usual 1920s steel stairs. Anyway, here was the photo I had come to take: 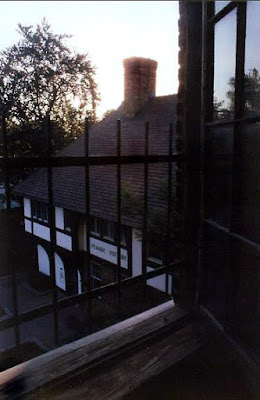 After I clicked my camera shutter, I looked down and was startled to see a man standing below, looking directly up at me. We locked eyes for a second, and instinctively I leaned back from the window out of his view, though there was no denying that he had seen me. His glance was not friendly, either.

I quickly found my partner "Chisel" and told him what was up. We went to the roof and searched the ground below to see what the man was up to. There he was, sitting next to our car in the Pewabic Pottery parking lot, talking on a cellphone. "Uh-oh." 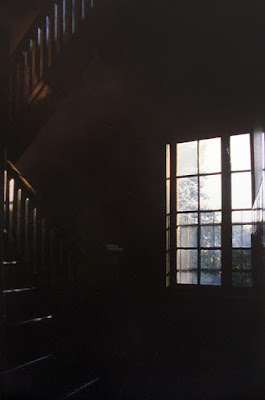 We knew we had to get out of there in at least a moderate hurry, so we ran downstairs to the door we had come in through, only to find that it had been freshly padlocked...dude had sealed us in! We were a little concerned about the fact that our car was obviously being guarded, but this development was even a bit creepy. At least we could still get out through a window high over the back alley.

We hopped out and walked around the far side. Since I was the only one who had been spotted Chisel nonchalantly went to get his car after walking around the block, while I strolled in the opposite direction waiting for him to pick me up. 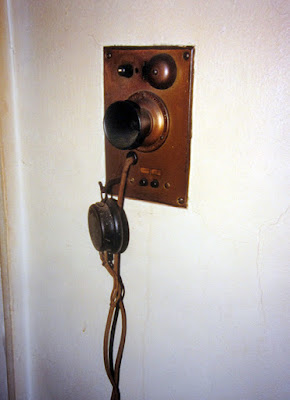 When he came up to his car the man asked him if he had just been in the building. Chisel said "Nope!" and through talking to him found out that the man was a neighbor who was paid to "keep an eye on" the Pembroke. Whoops.

Chisel casually drove west down Jefferson until he was out of sight, before turning back into the neighborhood to come get me and head east on Mack. Time to lay low for the rest of the day. 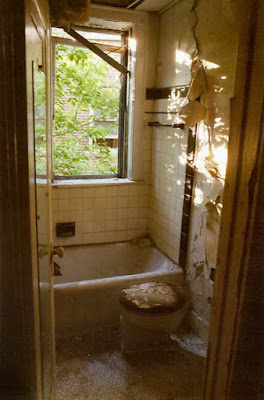 The huge building way off in the distance in this next shot is the old City Waterworks, and beyond it the Detroit River: 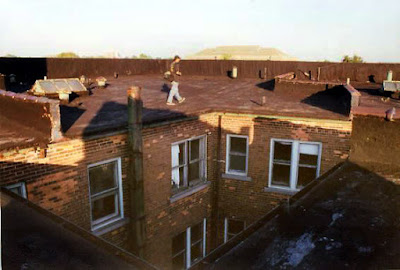 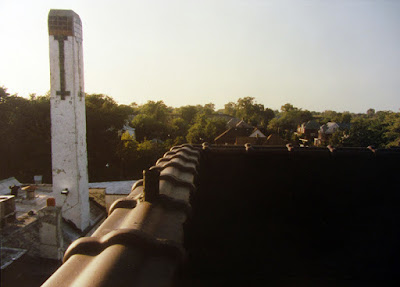