Everybody has seen the weird "space igloo"-shaped geodesic dome house on Vernor behind the Michigan Central train station, and a few people even have a vague idea that it was somehow connected to Jack White of the famous local band, White Stripes. The dome has been vacant for a few years now, and one night I happened to notice the door ripped open, so I snuck a peek inside. The brief history of this unconventional home is actually a lot more colorful than I would have ever suspected. 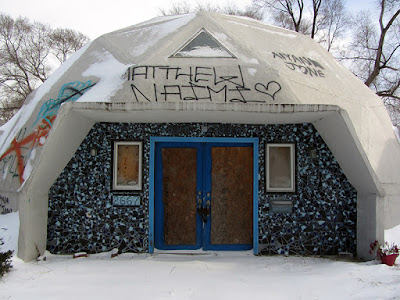 This house was built from 1997 to 1999 by Leo Gillis, a musician and audio engineer who is the older brother of Jack White (real name John Gillis). Some have even suggested that Leo was the more talented of the two, but I am not familiar with either of them and have no opinion on this. Anyway, Jack White lived nearby at 1203 Ferdinand, not in this house. 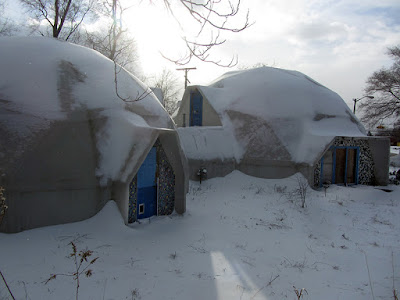 According to an article in the Metro Times, Leo lived here with his wife Parkii, an artist, and their sons Zachary and Ari, plus a rat, a cat, and two fish. Leo was always fascinated by the innovations of forgotten American designer and architect R. Buckminster Fuller, who came up with the idea of using geodesic domes as practical houses in the late 1940s, during the housing shortage after World War II.

Henry Ford Museum in Dearborn even has a huge exhibit showcasing Fuller's designs, including the only remaining Dymaxion House prototype in existence. Fuller also designed a streamlined, three-wheeled vehicle called the Dymaxion Car. 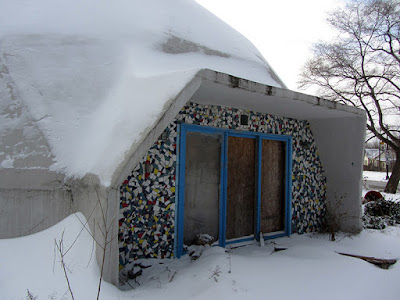 The reinforced-concrete geodesic dome is claimed to be the "lightest, strongest, most cost-effective structure ever devised," the article said. The domes are fireproof, impervious to earthquakes, can withstand winds of 150mph, and are easy for anyone to assemble, usually costing 1/3 of what traditional houses cost to build. They're cheap to heat too--by hot water circulated through a series of tubes in the floors of the domes.

Even though Fuller's designs were often superior and more economical than contemporary ones, none of his inventions ever caught on. He promoted sustainable living and the most economical use of space and materials. Fuller was also one of the first to base his inventions on renewable energy such as solar and wind power, in an era when society was burning up fossil fuels as fast as it could. 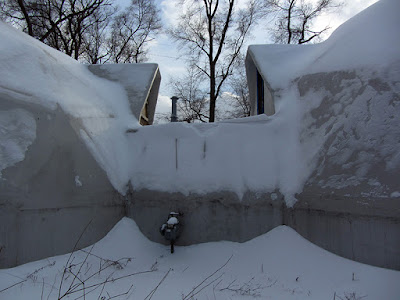 According to another article, the Gillis dome house tended to attract a lot of curious visitors, who apparently came in a never-ending stream of people knocking on the door to ask questions of the Gillises about their unorthodox home. They didn't mind giving tours of their place, since they built it to make an artistic and environmental statement, and to expose the public to alternative modes of living. "It's my mission in life to get at least one other person to build a dome before I die," Parkii said. 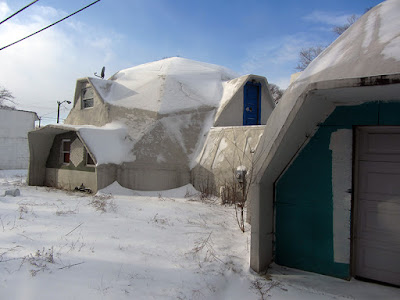 Some of the "quirks of dome living," as the article puts it, were a strange proliferation of spider webs high up on the ceiling, which had to be brushed off occasionally with a long-handled broom. Another thing that I personally noticed right away was the fact that all sound had a strange reverberatory effect inside the hard-walled dome. I think carpeted floors would probably counteract that though. 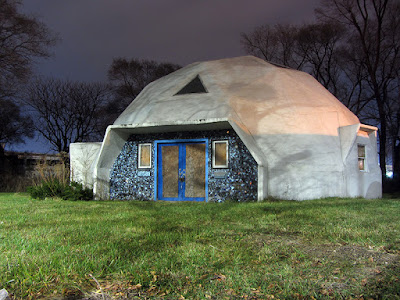 The Gillises paid $105,000 to build this house from a kit made by American Ingenuity, which is 2,400 square feet and connected by a passageway to the smaller 1,600-square-foot "garage" dome. "I think there’s something to be said for not living in square rooms," Parkii told the Metro Times. "It opens up your creativity. We noticed a change in the kids right away." The Gillises symbolically broke ground on the same day that the old Hudson’s department store was demolished downtown. They claimed their heating and lighting bills ran 40% less than they were paying in their old bungalow. 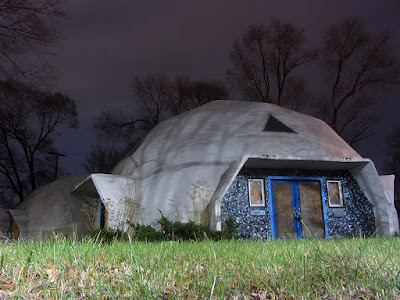 The tile mosaics around the doorways were done by Parkii, and according to the Metro Times there was also a Pewabic tile above the entrance emblazoned with the words, “Celebrating 300 years of life in Detroit” (though it has apparently been removed). The interior design was also Parkii's work. The front room was originally adorned "with glittery stars, blue candles, cobalt and slate tile and a long steel dining table." The family room was gold, brown, and red...to each his own, I guess. The Gillises also stated that they eventually wanted to produce their own renewable electricity on site, and to one day get off of the commercial grid. 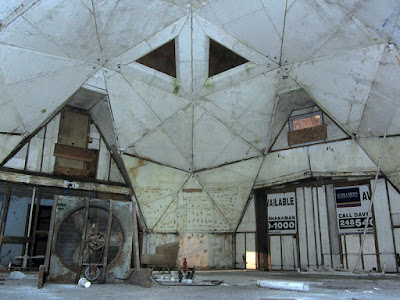 There is a thread on the detroityes.com forum about the dome house, and even a few interesting comments left there in 2009 by someone claiming to be the person who helped Leo Gillis build it. Under the screen name "Baphomet," he explained that he was a structural iron worker by trade, and he helped Gillis build the home for his family "on a shoestring budget" over the span of two years with the occasional help of some friends and volunteers. 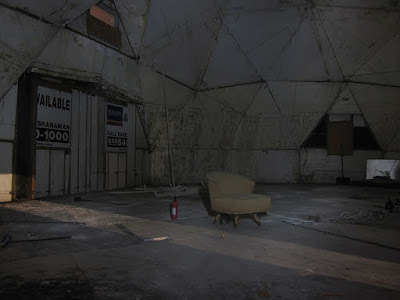 He then also strangely mentions that "Leo and I are both initiates of the Argentum Astrum, a lineage type order founded by Aleister Crowley in 1907." I'm not sure what that has to do with the domes, but you may recall that I talked about the infamous occultist's connection to Detroit in the early 1900s in an older post about the Masonic Temple. Baphomet claimed that aside from music, Leo wrote about "number theory, Aleister Crowley, and qabalistic theory, among many other things."

Baphomet went on to reveal a darker side of the dome's history, which began when they started digging to pour the concrete footing for the house. Of course I have no idea if any of this is true or not, but this is what he said...


We found what we believed to be human femur bones, one was intact and the other broken. At this point we should've stopped and called the authorities, however we knew that this would halt the building of the domes forever, so...we said a prayer and tossed the remains back into the hole and kept going. 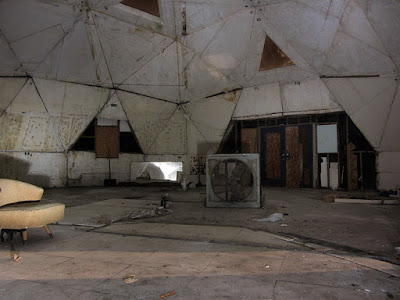 Since much of Southwest Detroit is basically built on top of an extensive ancient aboriginal burial mound complex, finding bones is certainly a possibility for anyone who digs in the area. Anyway, Baphomet said that later on while erecting the structure over the spot where they found the bones, he slipped and fell 12 feet, sustaining a back injury that he says still torments him to this day. Leo ended up getting divorced, and the Gillises moved out of the dome. Leo rented the property out, and a few years later a Detroit police officer allegedly "wandered up on the porch and shot herself," dying near the same spot that the bones were found. 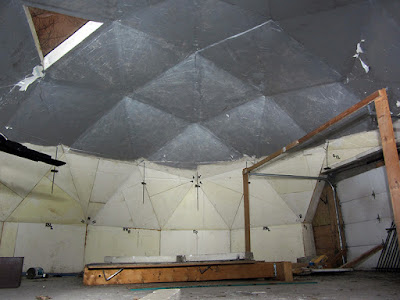 There was also a rumor that while the domes were being rented there had once been a shooting during a party at the house, and that there was a big blood stain left on the carpet from this (which was all gone by the time of my visit). Supposedly, the domes were being used as an after-hours venue at the time, like a "blind pig" of some sort.

The story goes that during the alleged party "two guys busted in with shotguns" but there was an off duty Wayne County Deputy at the party who fired on them with his pistol, killing one of them in the doorway and wounding the other, who tried to escape but didn't get very far. Baphomet corroborated this story, adding that the shooting happened near the same spot where the previous accidents had occurred. 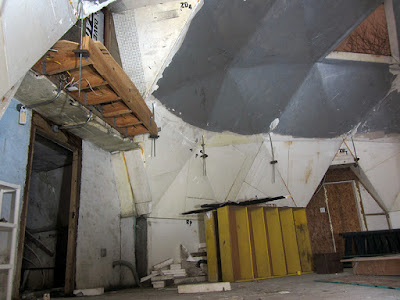 He then went on to share some less gruesome information about the house, such as how the floor in the kitchen was allegedly made from marble that was salvaged from the nearby Michigan Central Station, and that the smaller dome had a 1,000-square-foot loft that was used as a recording studio.

During my visit I saw no such loft, but that would explain why the walls in the small dome were painted a different color about halfway up, and there was a set of dismantled iron stairs laying nearby; most likely the second floor was removed at some point. Apparently the doorway up there allowed one to "walk out onto the roof and into another doorway to the upstairs of the other dome." 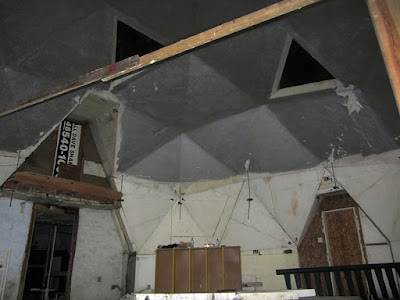 The Metro Times article backed up his claim that there was a second level with a studio:


The secondary dome serves as a two-car garage, with winding metal stairs leading to Leo’s recording studio. His alternative rock band, Catalyst, recorded there, as did his punk rock group, The Teenage Alcoholics.

Leo and Parkii did in fact divorce and move out of the home as Baphomet stated, and an article in the Detroit News reveals that the Gillis geodesic dome was one of the many properties rented out to tourists during Super Bowl XL in 2006. The asking price was $1,300 for a day, or $8,400 for the duration of the event. I'm not sure if anyone actually took the owners up on that offer, but it certainly doesn't look like $1,300-per-day material at the moment. 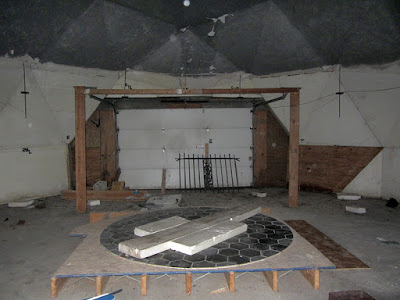 In February of 2012, Curbed Detroit reported that the Gillis Dome had been sold to Angel Gambino and Scott Griffin, the developers behind the 2051 Rosa Parks project. 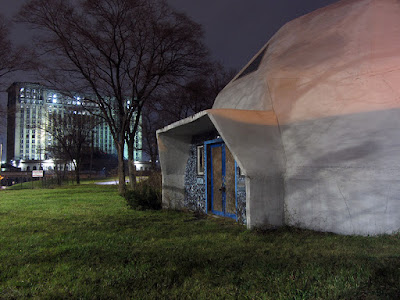 As of December 2015 the domes still appear to be abandoned, and Leo J. Gillis is an archivist at the Interlochen Center for the Arts in northern Michigan. Not a bad gig, I say.

Update: As of January 2019, the dome was just sold again to Christos Moisides for an "undisclosed sum." With the recent purchase of the train station by Ford Motor Co. signaling a sort of ribbon-cutting for unfettered gentrification of the areas surrounding Corktown, I'd say the "sum" is pretty damn high.