Young Man, There's a Place You Can Go

One summer's morning, we checked out the Hannan Memorial YMCA at 10401 East Jefferson Avenue. We had never seen inside an abandoned YMCA before, so I guess it seemed novel at the time. 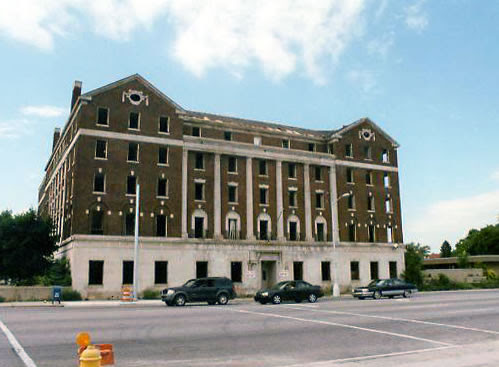 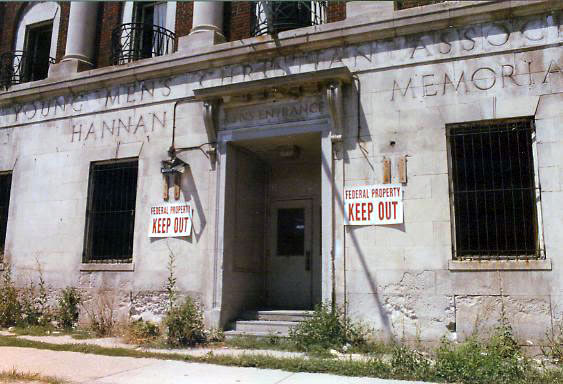 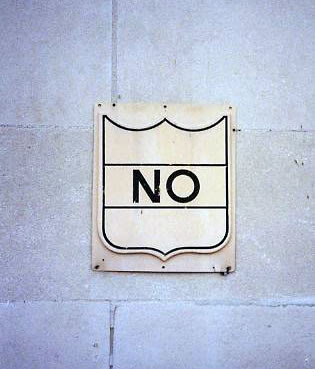 ...Well, we did anyway. There was also allegedly a policewoman who lived in the house kitty-corner from this building, who was said to keep watch for anyone sneaking in. Sadly, that apparently was still not enough to keep people from making off with its entire sheet-copper roof at some point.

Looking at the exterior styling queues reminded me quite a bit of Ypsilanti State Hospital: 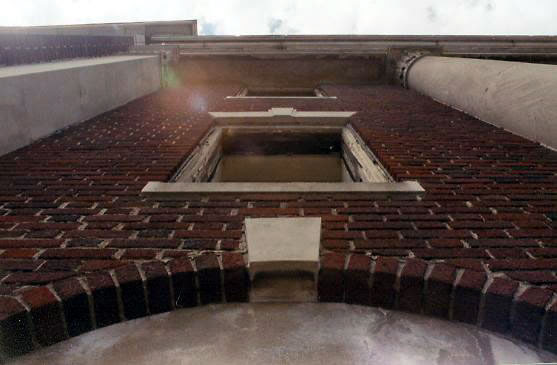 Not intimidated by the presumably defunct surveillance camera outside, we walked in and discovered to our surprise that the building still had electric power turned on! Apparently someone had disobeyed the (in)famous imperative, "Would the last person out of Michigan please turn off the lights." 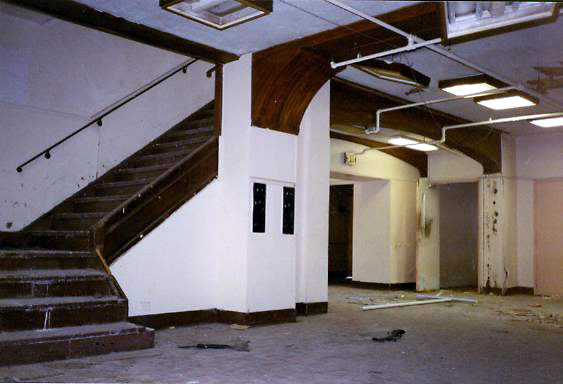 Despite the ugly modernizations that had been done, it was evident by the fancy wooden arches in the lobby that this place had once been rather snazzy. Here is a brick fireplace, framed by nice dark walnut panelling, though I could have done a much better job photographing it: 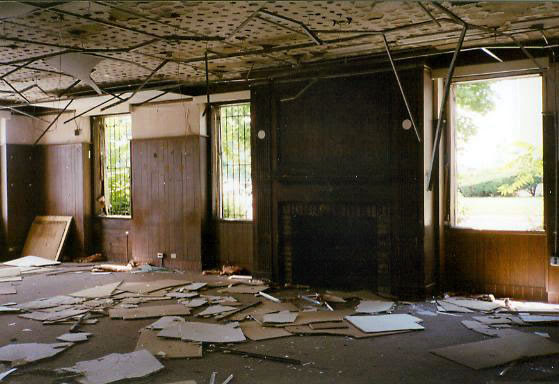 This YMCA was built with money willed by the legacy of William Washington Hannan, a local real estate mogul who was apparently successful enough to have a bungalow for himself on Russell Island (which is actually the northeastern-most tip of Harsens Island). He also originally owned the parcel upon which this YMCA sits.

Patriarchal Detroit historian Clarence Burton rambles on about W.W. Hannan for a full three pages of his The City of Detroit, and includes a photograph of him as well. Back in "the day" Hannan was one of the founders of the National Association of Real Estate Boards, and in fact he was also the investor who built the Madison-Lenox Hotel downtown, as well as the Pasadena Apartment Hotel, on East Jefferson. Burton writes that Mr. Hannan staked his reputation and everything he had upon those first two ventures, and came out very successful in the end, calling them "monuments to his name in Detroit." 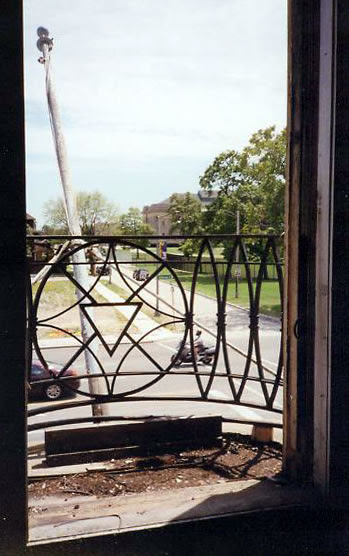 Hannan of course went on to much more success in the Detroit real estate business, but that's where he got his start. There is also a pair of stained-glass windows in St. Paul's Episcopal Cathedral bearing his name, and that of his wife, Luella. Their foundation was started in 1925 and continues its work today. For what it's worth, there is also a Hannan Road in western Wayne County, which might also be named after them. W.W. Hannan died around 1918, initially leaving $10,000 each to the YMCA and YWCA of Detroit, according to an article in the Detroit Free Press at the time. That's not quite how it worked out, though.

Another article from 1919 announced that Hannan's main gift to the people of Detroit was a trust fund of $2.5 million to be for erecting a monumental music hall next to the Detroit Public Library, called Hannan Memorial Hall. It was to be the city's musical center, and also a place for important oratory, at least according to his widow, Luella, though she later changed her mind. The book An Illustrated Inventory of Theater Buildings in the Detroit Area by Andrew Craig Morrison says that the project "never got off the ground," and Mr. Hannan's memorial took on a different form several years later, as this very YMCA building. 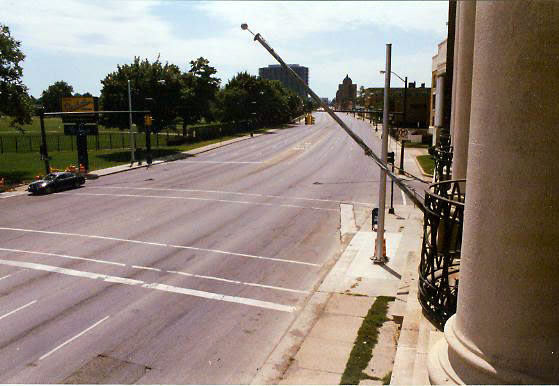 A 1921 article explained that Mrs. Hannan eventually filed a lawsuit to put a stop to building the Hannan Memorial Hall, on the grounds that there wasn't really enough money to properly fund and maintain the caliber of structure befitting of a place next to the library, reasoning that the money instead should be directed to playgrounds, parks, and recreational facilities for children. Furthermore, with Orchestra Hall just recently erected uptown in 1919, it would be senseless and redundant to spend the money building another music hall. 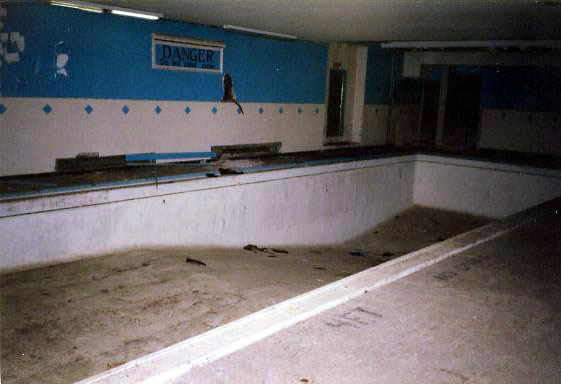 At any rate, this YMCA was fashioned in the Neo-Georgian style by local architect Robert O. Derrick in 1927, two years before he was commissioned to design the magnificent and world-famous Henry Ford Museum in Dearborn. Derrick had designed Edsel Ford's Haven Hill Estate in 1923, and according to W. Hawkins Ferry, he also designed the Grosse Pointe Yacht Club in 1927, as well as several prominent Grosse Pointe homes and the Jennings Memorial Hospital (also on East Jefferson Avenue). Derrick may have also had a hand in designing the Clark Building at 25 Grand River, which I explored in an older post. Hawkins asserts that this YMCA attested to Derrick's skill with the Georgian style of architecture as used in urban areas. The Hannan Memorial YMCA was even featured on the front cover of the 1929 Michigan Architect and Engineer, Volume 11.

According to a book by Geoffrey Upward, the reason Robert O. Derrick was chosen to design Henry Ford Museum (instead of, say, Albert Kahn) was because of one night in 1928 when both men were aboard a steamship to Europe. Ford knew that Derrick was aboard, and invited the architect to his party for tea one night, and they got to talking. Derrick was also friends with Henry Ford's son Edsel and his wife Eleanor, who of course were very active in the Detroit art and culture scene. 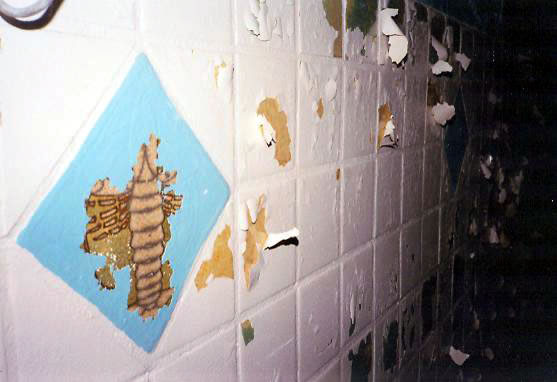 The pool was tiled with Pewabic(?) insets on the walls. Unfortunately, these tiles were painted over at some point, one of the many modern rehabs that had been inflicted upon the beautiful old building. A history timeline at ymca.net tells of the importance of swimming to the "Y" program:


In answer to a YMCA campaign “to teach every man and boy in North America” to swim, George Corsan arrived at the Detroit YMCA in 1909 to teach swimming using radical new methods: group swimming lessons and lessons on land as a confidence builder. In Newark, New Jersey, alone, he taught 800 boys to swim in just four weeks.

There were also many "black" YMCAs built in 1910. They provided clean, safe dormitory and dining facilities, "which were a boon to black travelers, especially servicemen, in a segregated and discriminatory era." Upstairs we found the small, uninteresting resident rooms that "Young, Christian Men" had lived in. 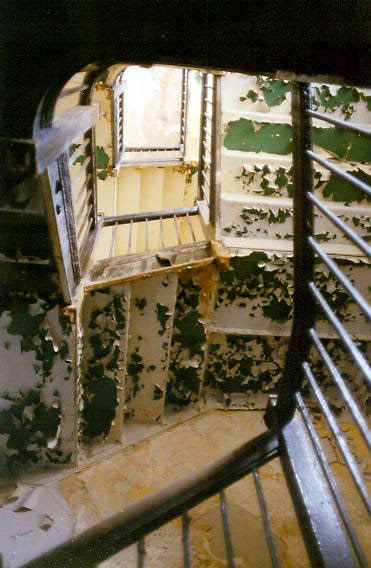 Clarence Burton wrote that the Detroit Young Men's Christian Association was on a campaign of expansion and building in the years when the Hannan YMCA was built, with their offices downtown at 200 Association Building, Grand Circus Park. A handy finding aid description in the University of Michigan Bentley Historical Library's archives goes into more detail:


From 1910 to 1930 the population of Detroit trebled. The growth in YMCA membership more than matched the city's rapid population growth, moving from just under four thousand in 1910 to fourteen thousand in 1930. It was immediately clear that the Downtown YMCA building would be unable to provide convenient access to its facilities to all interested men.

Burton said that by 1931 there were to be nine branches opened across the city, including this one. There was the Downtown Branch at Adams & Witherell, the Fisher Branch at Dexter & West Grand Boulevard, the Hamtramck Branch at 2912 Caniff, the Northern Branch at Woodward & Winona, the Northeastern Branch at 10102 Harper, the Railroad Branch at Livernois & the Michigan Central RR, the St. Antoine Street Branch at 635 E. Elizabeth, and the Western Branch on Clark near Dix (Vernor), which I explore in a different post. A $5 million fundraising drive was held in 1925 to finance the building of these branches, largely underwritten by the philanthropy of several prominent Detroit families, including the Fords, Dodges, Kresges, Fishers, and Hannans. 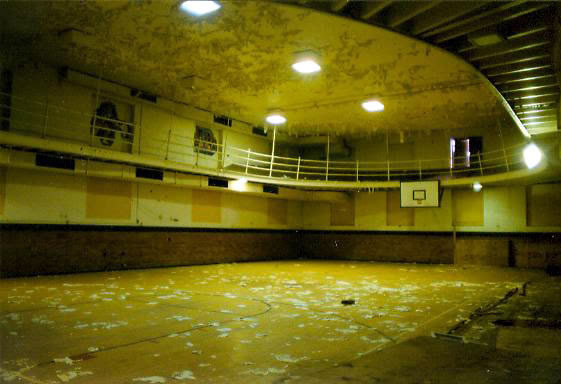 There was a big gymnasium on the top floor, with its big lights still illuminating the falling paint chips, and a running track around the upper deck. Center court was painted with the logo of the Detroit Job Corps: 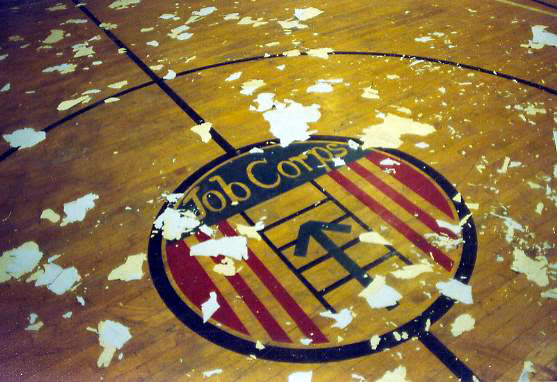 According to a recent article by Joe Guillen of the Free Press, this building was converted from a YMCA into a U.S. Job Corps center in the 1980s, which was the last taxpayer of record, and, I presume, also the reason for the "Federal Property" signs.

Detroit-ish.com claims that the YMCA's membership was dropping because it was struggling to get younger members, but the real reason it died was because of a brazen murder that took place there around that time. That website says that one night in the late 1980s the desk clerk was killed by some unknown assailant, after which membership at the YMCA plummeted to almost nothing, prompting the transfer of the building to the Job Corps program. In 1999, the Detroit Job Corps Center moved out to a new home on the west side. If I'm not mistaken the Job Corps was also quartered at Historic Fort Wayne at some point in the 1970s. 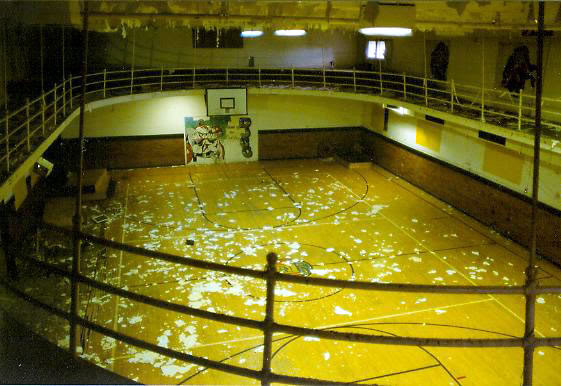 I took the opportunity to stick my head out some windows for shots of the admittedly spartan architectural details: 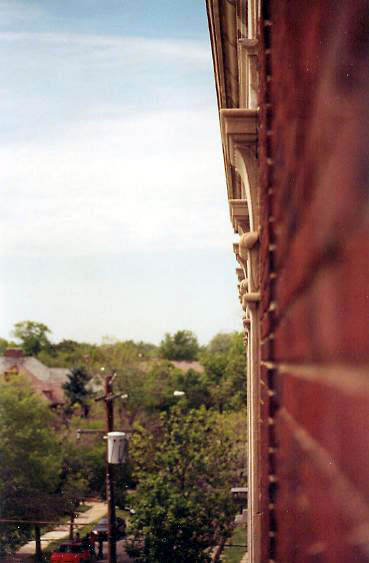 Looking down the columns: 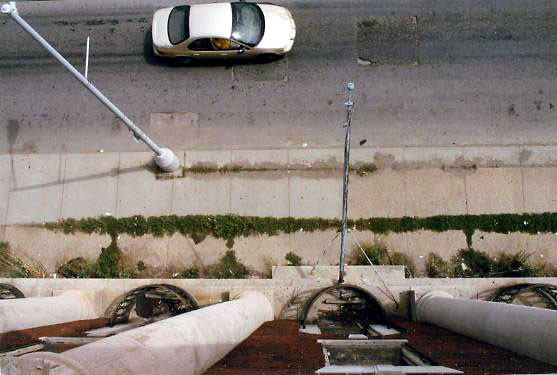 Looking out one of the oval attic windows, west on Jefferson Avenue toward downtown: 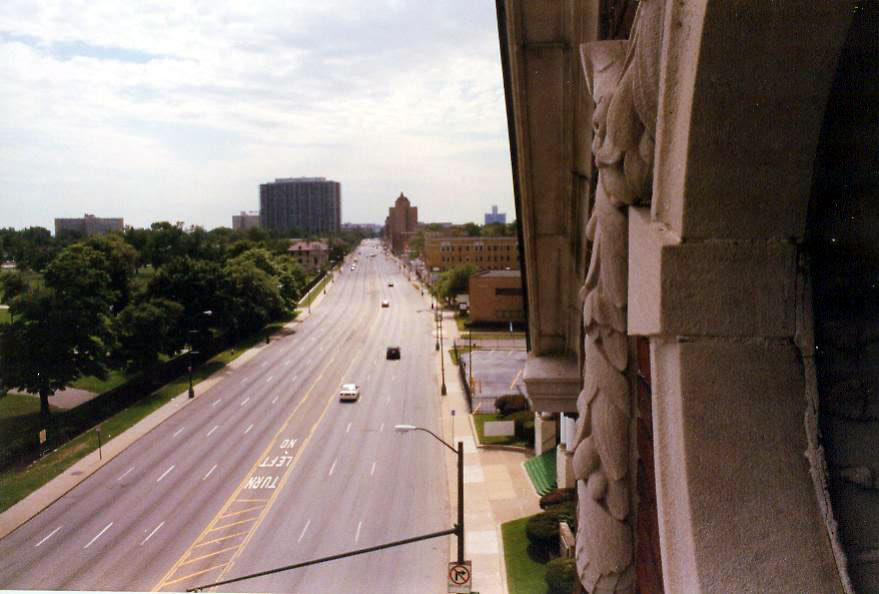 Directly across the street was the old City Waterworks: 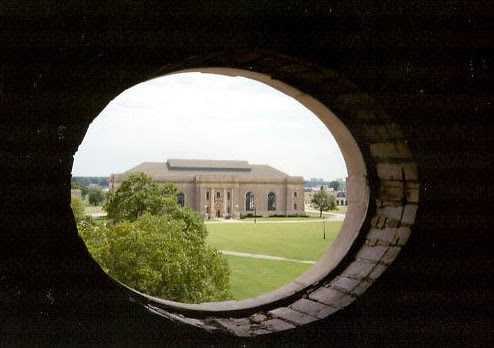 Normally the waterworks building can only be viewed from far away via the sidewalk, so I attached the zoom lens to see what I could do from up here: 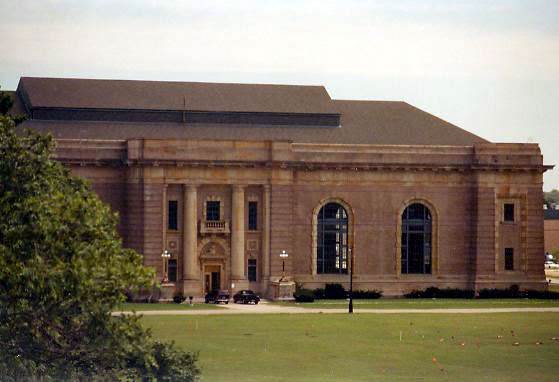 Turning my lens back down Jefferson Avenue, here is a compressed shot showing the apartment towers of Indian Village, as well as the Hurlbut Gate, which once allowed public access to the Waterworks Park (in the days before terrorism)... 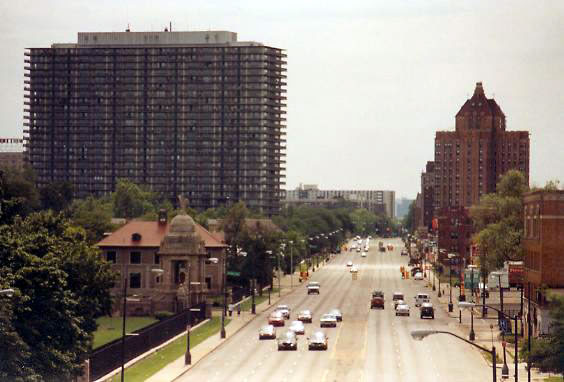 Again, a big portion of the roof on this place was sheathed in copper, and I'm sure that someone made themselves rich overnight when they turned in all those tightly rolled-up bundles, and folded flashings. 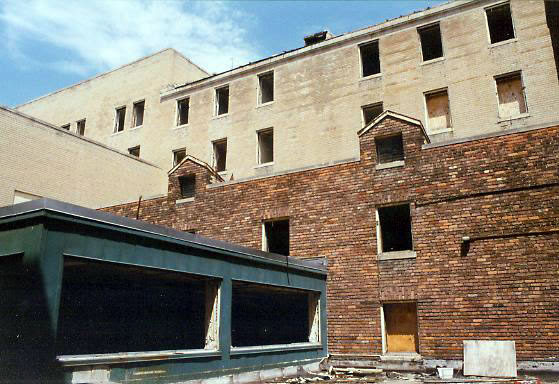 There was a little bit of a balcony up here in front that undoubtedly would have made for a nice nighttime chill spot facing the river: 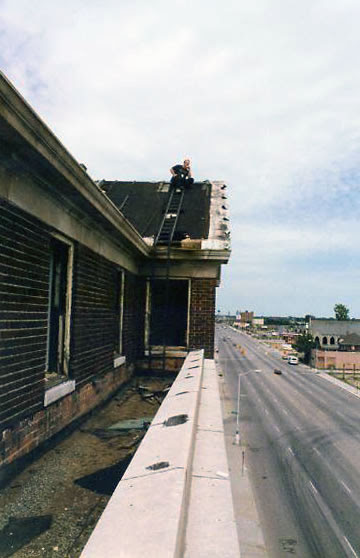 Upon leaving, we could smell gas wafting out of the basement and into the street so strongly that it almost knocked us over. We contemplated calling the gas company to have it checked, but as it turned out someone had already reported it.