One of the more overlooked buildings downtown is the three-story structure at 122-126 Lafayette Boulevard--though it actually sits directly next to one of the most famous eateries in the city, Lafayette Coney Island. It also used to sit up against the now-demolished Lafayette Building. 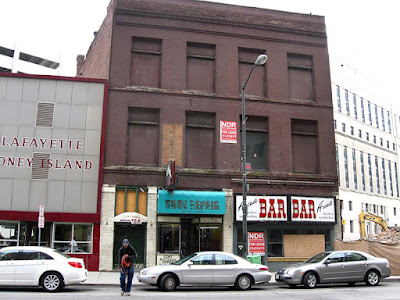 Because this building has storefronts on two different streets, that made researching it difficult since I had to look up all the potential addresses for both sides of the building, both before and after the city-wide address renumbering of 1920--which yields a total of 11 different addresses this building could have had. The building is marked on the 1921 Sanborn map with the word "Drugs," I assume meaning that it was a drug store at the time. Its address prior to the city-wide changeover was 16-18 Lafayette (or 31-35 Michigan Avenue). The structure seems to appear on the 1897 Sanborn map as well, and was subdivided up into three stores.

When we went, the Lafayette Building had just been torn down, and the gaping crater still remained: 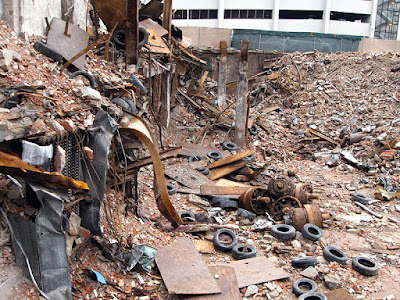 If I recall correctly the door we were able to get in through led straight up to the second floor, while the shoe repair shop and Arcade Bar (aka, the "BAR BAR") remained separate. We recalled fond memories of a decade prior, from the night we snuck into the Lafayette Building for the first time; afterward we had adjourned ourselves to the Arcade Bar for some post-mission beers to wash down all that asbestos. The bathroom was in the basement, and there was a fellow down there at the sink cutting up cocaine on a magazine cover who was thoughtful enough to ask if I wanted some, though I had already inhaled my quota of white powder for the day. I see that the bar has recently reopened as St. Brigid's Bathtub Pub.

Anyway, there wasn't much to see here on the second floor, though I knew the third floor was a treasure trove based on my first visit a couple years prior. 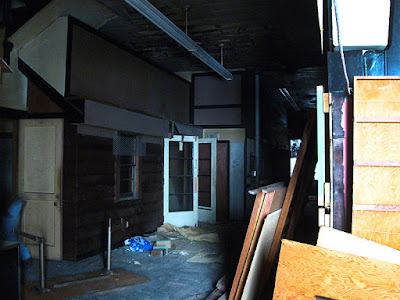 The first time I ever went into this building, I jumped down onto its roof from a 4th-floor window of the Lafayette Building and climbed in through the roof hatch:

Looking back up at the Lafayette, towering above:

This new parking garage occupies the spot where the old Detroit Free Press Building used to stand, until 2006:

The J.W. Weeks & Co. Detroit City Directory for 1879 lists the Christadelphian Society at "No. 16 Lafayette," who met every Sunday at 10:30am. I'm not for sure that this building was standing in 1879, but it could have been. The same directory also shows the Freund Bros. at 31-35 Michigan Avenue. According to a 1907 issue of The American Stationer there was a William Freund & Sons that made stationery and was based in Chicago, but I'm not 100% sure this was the same business.

This building was also home to the venerable downtown merchant Walter's Pipe Shop until it closed a few years ago. If I'm not mistaken Walter's had been in business in the Lafayette Building when it was built in 1923, then moved here after that building gave up the ghost.

The Johnston's Detroit City Directory for 1855-56 shows the address of 16 Lafayette to be the home of Robert Lee Barrowman, manufacturer and dealer of hats and furs, though I doubt that this building had been erected as early as 1855.

A c.1918 Michigan Manufacturer & Financial Record shows the Acme Drug Co. at 33 Michigan Avenue, which the Department of Labor lists as having 16 employees in 1920. An issue of The Era Druggists' Directory from 1921 still lists Acme in this building, at a new address of 127 Michigan Avenue.

The third floor was absolutely jam-packed with stuff; it had been a travel agency at some point before it closed and was full of racks and racks of vintage pamphlets and maps of various places. There were also a bunch of old vintage drug bottles full of pills as well, and while none of them were especially fun sounding, it would seem that they were indeed leftovers from the Acme Drug Co.'s occupancy of this building. 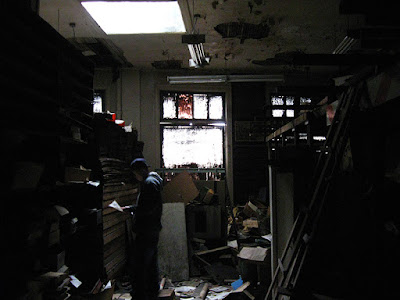 So, we spent a lot of time rifling around in this junk for anything interesting. A lot of the drugs and pamphlets dated from the 1950s to 1970s or thereabouts, if I recall correctly. One pamphlet I found here ended up proving rather useful, an advertisement for the Hotel Fort Wayne. 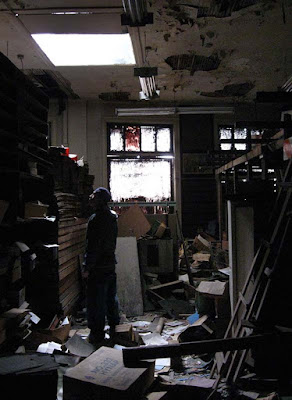 That rectangular opening in the ceiling was a skylight, which was where most of the light in here came from, considering the fact that all of the window glass had been painted brown: 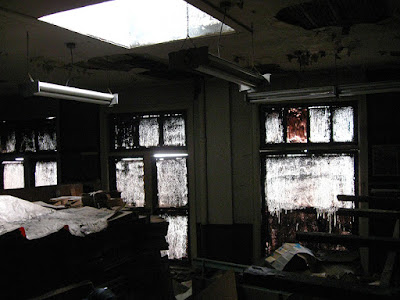 Up top it was clear that the demolition of the Lafayette Building had dropped a lot of debris down. 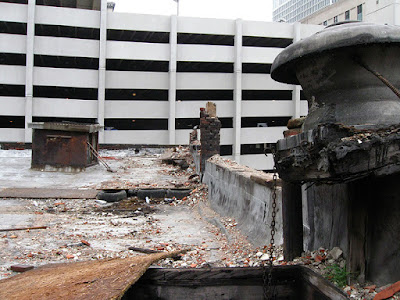 This was one of those really short rooftops where you feel like everyone in all of the surrounding buildings is staring down at you from above, about to call the police. 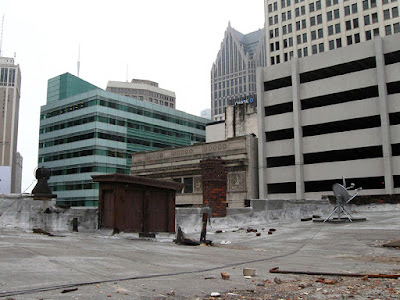 There's the First State Bank, which I recently wrote about in another post: 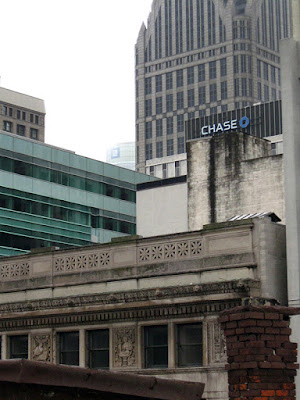 Lafayette Boulevard sure looks one-sided now that the Lafayette Building is gone... 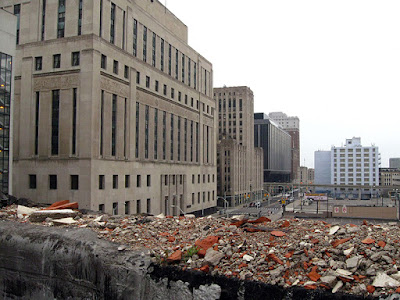 The white, three-story building seen in the background here, 201 Michigan Avenue, was quietly demolished a year or two later in favor of a parking lot even though there wasn't a single thing wrong with it: 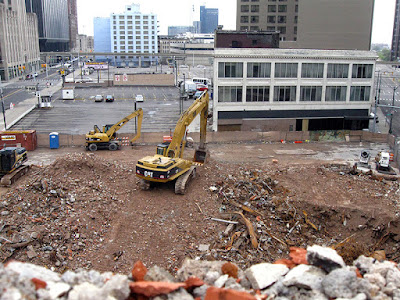 Clearly this building needs some work, but it ought to make an excellent rehab project. 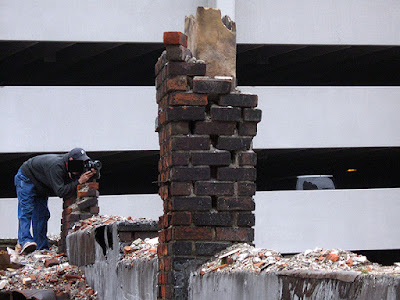 UPDATE: My colleague Rob Klatt informed me that he has two older photos of this building that show the transom window above the doorway (seen in the first photograph of this post). He said that before the window was boarded up, you could see that it was a triptych of leaded glass and colored medallions depicting windmills:

Rob said he was unable to find any connection of the building's history to the windmill motifs.