Day 3.
Like yesterday, I woke to find the sun already above the horizon, despite the fact that I had wanted (and expected) to wake up at or before sunrise. I guess I was getting babied, sleeping on these cots in these fancy cabins. It was about 8am...I quickly made another small fire to warm some water for a cup of coffee. Sure was a nice luxury.

Returning to the cabin to drag up my gear, I then made a decision that would greatly affect the remainder of my stay on this island. I figured that since I was essentially going to be returning along this same path to get picked up tomorrow that I could leave behind most of my gear and travel lighter. Judging by the fact that I had made it across the whole southeast portion of the island yesterday in a mere couple hours, I figured that covering the northwest half would be just as easy, and I could probably even return back here to this cabin to camp again.

Something in the back of my head however told me to at least bring enough with me in case I had to stay overnight out in the bush for whatever reason. Luckily I am not brash enough to completely ignore that particular little voice. I knew I needed to bring some food and water at the very least, and seeing as I didn't want to carry all that in my hands or pockets, I knew I pretty much had to carry my pack.

And if I was carrying my pack I might as well carry my sleeping pad and wool blanket. I guess I could leave my heavy sleeping bag here for retrieval later since it was the single widest, bulkiest item I had, and its position at the top of my pack was what gave me the most trouble with negotiating the fallen trees on the trail.

I slung my lightened load over my shoulder and rammed headfirst into the series of pine-scented barricades, the battling of which would comprise much of my activities for today.

The sunlight filtering through the enchanting groves of trees gave the forest a very convincing magical feel. Despite being the most traveled of all the outer islands, Minis Gitigaan still feels as pristine and wild as any place I've been. Most visitors to this island probably never venture far from the harbors.

My course for today would be to leave the town of Success via the Harbor Trail heading northwesterly toward Indian Harbor, where the Native American cemetery lay (MAP). This would be a trek of about two miles, so I should get there pretty soon. It had also been the site of an Indian village, in olden times.

It wasn't very long however before the gauntlet of fallen trees across the trail would force me to rethink my strategy. I was getting my ass kicked here…I mean these things were down every ten fucking feet. It was not possible to just walk, I was constantly climbing over, through, around, or under shattered evergreens on my hands and knees every few minutes. It was literally easier to bushwhack than to follow the fucking trail! I finally got fed up and blazed a beeline for the beach. Granted, the beaches on this island are gravelly at best and often mucky, but at least I could walk a straight line and see where I was going. The trail was faint enough even without a pile of broken trees across it, so I figured this was the best option.

I think the peak seen in the distance is Mt. Pisgah, over on Beaver Island:

Traveling across the stony terrain of the shore was not as bad as I predicted, and soon enough I found myself at Indian Harbor. Now the only trick was finding the trail again so I could go to the burial ground. A river emptied here into the marshy bay, and I poked in and out of the tree-line in search of the trail. I found scraps of it but nothing contiguous enough to make me feel like I was on the right road.

At last I came across a large clearing that had more old gnarly fruit trees in it, and a path running through it up into the woods. Here also was the old rusted McCormick mower that Ruchhoft had reported spotting many years ago.

Here I sat down and removed a few layers of clothes, as the sun had begun to warm things nicely. I then continued up into the woods where I found what might be a makeshift hearse, so to speak?

Remember, the tribes still use this cemetery for burials even today, and they would have to have some way to bring both the deceased and the materials to construct their spirit house up the narrow trail from where they land their boats on shore. I can't think of anything else this contraption might be?

Here also is where I began to encounter a few specimens of Minis Gitigaan's reputedly large snake population, sunning themselves on the trail. Another 15 minutes of walking brought me back into the bright airy hardwoods, and I found myself before the sign that welcomed the traveler onto sacred ground.

I offered the last of my tobacco here at the entrance to the cemetery and began to look around.

I have struggled with the question of whether it is respectful to publish these photos publicly, but the fact is the location is not kept a secret, and so far to my knowledge it has never been desecrated by anyone. By showing this unique sacred place I hope that it will help broaden knowledge and understanding of Michigan's first people and their culture, without cheapening it into a tourist attraction or mere photo opportunity.

Its remoteness has protected it for centuries; it is extremely time consuming and expensive to even get out here, which keeps it outside the reach of trifling people. If you do happen to find yourself here, I would hope that you treat it with reverence and respect.

Some standard tombstones were present here as well.

There were beads and decorative accoutrements used to personalize some of the spirit houses:

I had seen this one before, on the web page that had originally alerted me to the presence of an Indian cemetery on Garden Island, written by a Polish couple who traveled to Grand Haven, Michigan to buy a sailboat, and sail it all the way back to Poland, documenting the adventures they had along the way. It was finding that web page that made me seek out and buy Ruchhoft's book.

Anyway, the stone on the front says "Anungoday, Bright Star of the Universal Space:"

…or at least it used to.

There were so many tiny little spirit houses haphazardly tucked away in the brightly scintillating glades of this oak paradise, it seemed as it there was no rhyme or reason to it--everywhere I looked there was another one or two.

And even more were in such advanced decay that they scarcely still existed but for a small pile of shaped wood.

Suddenly I came upon the spirit house of Keewaydinoquay, the woman who lived in the northwestern corner of the island in what is called the "Shawboose Cabin" on the map.

All I knew of her was that Ruchhoft had written that she was an "Indian lady" better known as "Kee," "who does research on herbs and herbal medicine on the island in the summer months." It turns out that Minis Gitigaan is also a place where many rare endangered herbs and wetland flora can be found, perhaps owing to the island's past as an ancient aboriginal "garden."

It hadn't occurred to me that she would have passed away already, but I guess she was probably pretty old. Her stone says she was born in 1918 and died in 1999. Oh well I guess I can't pay her a visit for tea, heh.

I was out of tobacco, so I left an offering of some of my trail mix, being that one of the places I had hoped to get to was her cabin. I didn't know it at the time, but Kee was a multi-faceted person with a very fascinating and colorful history, which I will delve more deeply into later.

I was on the lookout for Pete Monatou's grave, but I did not see it. You may note that his last name translates to "spirit." Kee's full name, Keewaydinoquay, translates to "Woman of the Northwest Wind."  What a strange island, and strange cast of hermit-like allegorical characters inhabiting it--they almost didn't seem like real people; more like just fanciful names of genius loci, or guardian spirits who protected their opposite ends of the island after death.

Here is an old postcard image I found of what the burial ground used to look like decades ago...there were many more spirit houses in the past, it seems: 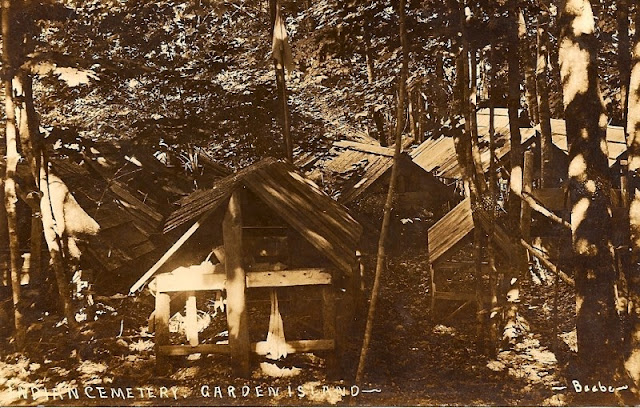