Along Federal Street at Junction Avenue, just south of St. Hedwig's church, deep in the heart of Southwest Detroit, lie the remnants of the Federal Motor Truck factory: 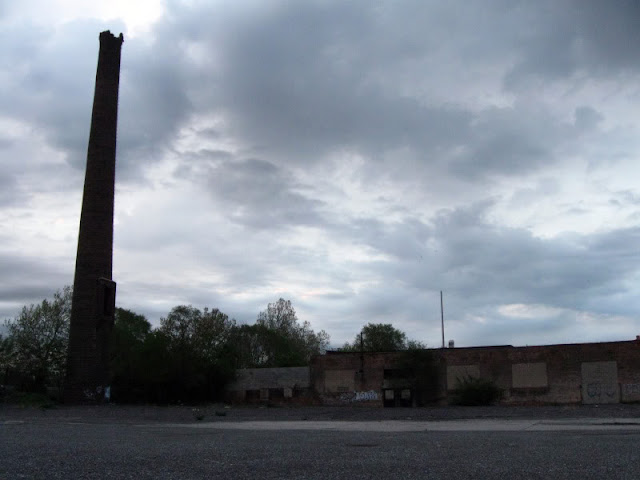 “Since 1910 Federal Trucks Have Been Known in Every Country—Sold on Every Continent” says Robert Gabrick in his book Federal Trucks Photo Archive. Martin L. Pulcher (I have also seen it misspelled "Plucher" and "Pilcher") was vice president and general manager of the newly formed company, and I have also read that he had formerly been with the Oakland Motor Car Company prior to heading Federal. From 1910 to 1959, Federal was an independent truck maker that assembled over 160,000 trucks for all types of uses including delivery vans, buses, garbage trucks, fire trucks, wreckers, and over the road heavy haulers. Whatever the application, Federal's motto was, “You can expect years of faithful service.”

An article in Old Cars Weekly by Rolland Jerry said that most Federals were powered by Continental engines. Diamond T was their chief rival, who competed against the conservative no-frills Federals by going for styling points, which obviously worked. Diamond T surpassed Federal in sales after 1928, and never lost the lead. But thanks to that conservativeness Federal actually did pretty good through the Great Depression, which was rare for independent carmakers. The Federal plant was about 500,000 square feet in size and employed 600-700 people. They saved cost by producing their own bodies in-house as opposed to farming that expensive component out to Fisher, Budd, or Briggs. 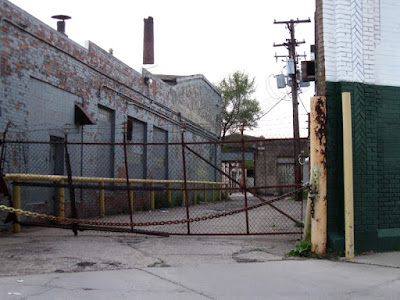 The building on the right, which recently housed the Mexicantown Flea Market, has been demolished since I took these photos in about 2007.

Rolland Jerry went on to say that Federal did supply a few trucks to the military during WWI, but this business became their bread and butter after 1934 as the U.S. Army drastically built up its vehicle fleet. According to the book The United States Army and the Motor Truck: A Case Study in Standardization, by Marc K. Blackburn, the company president, M.L. Pulcher, was instrumental in working with the U.S. war department in modernizing and standardizing their fleet of motor vehicles between the World Wars, in order to streamline the military's interactions with the auto industry. During WWII Federal produced 11,338 military vehicles, according to the Federal Trucks Photo Archive by Robert Gabrick, winning the Army-Navy “E Pennant” four times for production excellence. 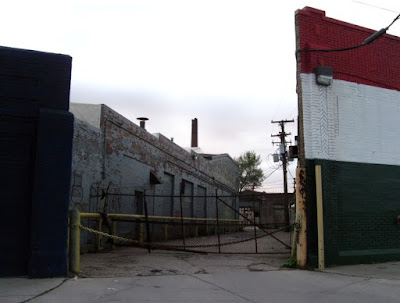 I imagine it was rather convenient that the Federal Motor Truck Co. plant was located but a few mere miles from Fort Wayne, which during World War II became the Motor Supply Depot of the entire U.S. Army, and served as the shipping point for all Detroit-built vehicles and parts used in the war effort--especially trucks. In fact, Fort Wayne's internal newsletter was named Truck Tracks after all of the myriad trucks that were to be found parked there at all times. It was later touted by General Patton and many others that the mobility of the U.S. Army in Europe facilitated by the trucks it used for moving men and supplies was the primary reason why they were able to secure victory there. And it may have arguably been that prowess that was a prime contributing factor to the rise of the tractor-trailer trucking industry as a means of shipping goods on American roads in the post-war era.

If Federal managed to stay healthy through the Great Depression on military contracts, they enjoyed the zenith of their existence during World War II, but after those flush years of nonstop production had waned, the plant on Federal Street found itself with spare time on its hands again. According to another article by Rolland Jerry, Federal therefore turned back to their roots--small output of custom built purpose-specific heavy duty rigs; they made airfield tractors and refueling trucks for the Air Force's new giant bombers during the Korean War. In 1952 the company was merged with Fawick Airflex Co. out of Cleveland, and military truck orders for other countries around the world started coming in.

The new Fawick management eventually sold the company again to Napco Industries of Minneapolis. Unfortunately due to toughening currency controls in the 1950s, the foreign market almost completely went away for Federal, and overseas manufacturers starting up. The Big Three also got into the heavy truck market a little more strongly, and Federal simply did not have the dealer network to compete with them. 1954 was the last year for production at the Detroit plant, and all the machinery was pulled out, most of it transferred to Minneapolis, but the hallowed, 600-foot assembly line was allegedly sold to a truck plant in Turkey. Napco continued making Federals in Minneapolis for military and foreign sale, but by 1959 closed up shop and the Federal name faded into history.

An interesting discrepancy came up when I checked the Detroit Historical Society's Arsenal of Democracy Project to see what specific items were made for the war effort in this plant. Interestingly enough, the only result I found was for the "Republic Aircraft Products Division," at 5914 Federal Street. According to that list, they made "aircraft engine toppers, guides, rollers, valve locks, seats, aircraft engine parts." Seems like a tight fit to have both Federal Motor Truck and a separate aircraft parts maker in the same little plant, unless they were one and the same. A 1925 city directory however lists the Federal Motor Truck Co. at 5780 Federal.

Interestingly, I then found The Automobile Trade Directory for 1921, which shows England Mfg. Co. at the 5914 Federal address--a company that the Ternstedt Division of Fisher Body Corp. bought up that year. According to this article, England had been turning out stampings and selling them to Fisher Body for awhile (for use in International trucks, if I understand correctly), so I assume that this must have also been Federal's body maker.

So naturally I went to the Sanborn map for Detroit, 1910, which shows Federal Street to be “Leavitt Street,” and the triangular site of the plant is occupied by Union Transfer & Storage Co., who the map says warehoused “farm machinery” in the mostly wooden structures. The Lowrie & Robinson Lumber Co. Yard and Planing Mill were shown on the western half of the site. Apparently Federal Motors didn't exist yet.

The Sanborn for 1924 shows Leavitt Street to be renamed “Federal,” and the Merchant’s Warehouse Co. is listed in the easternmost tip of the complex, with the W.J. Burton Co. Sheetmetal Products in the next buildings to the west, up to the address of 5680, whereafter the Federal Motor Truck Co. occupied everything west of there to 5900. The last buildings to the west over next to Hammond St. however are labelled as Ternstedt Mfg. Co. Plant #3, "manufacturing automobile hardware & sheetmetal goods," with a machine shop in front, a “factory building,” and iron foundry to the rear. Apparently my earlier hunch about Federal's body shop was correct.

The Sanborn for 1950 shows Socony Vacuum Oil Co. Inc. in the easternmost building and The Burton Co., “manufacturers of sheetmetal products,” in the next three buildings to the west, with Federal in the remainder. It shows Federal’s Service Department at Hammond St. between Ranspach St. and the Michigan Central RR. The building at 5914 Federal was at that time occupied by the Sealy Mattress Co. as a factory. By 1969 the Directory of Michigan Manufacturers shows Brown Reliable Bedding Co. at 5914 Federal, making mattresses.


A current view of it on Google Maps shows the structure to be collapsed, with smoke wafting out of it as if it had recently burned down (rotate the view to the east to see it before the collapse).

It is my understanding that, fittingly, as of at least a couple years ago this blank piece of land where the old Federal plant buildings used to stand has served as a place for semi-truck drivers to park overnight, and patronize the services of the local lot lizards.