After spending quite some time reverently wandering this strange and beautiful place, I reversed my course down the path and met up with the main trail again to head north along the Schoolhouse Trail. 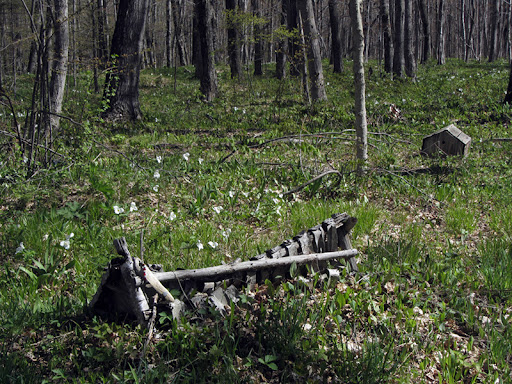 I soon came across a large boulder in the woods that seemed totally out of place. Because of the one on Beaver, I wondered if it had been part of any ancient solar calendar for the agrarian race of great ancestors who gave this island its name, or if it had merely been dropped here by a glacier. 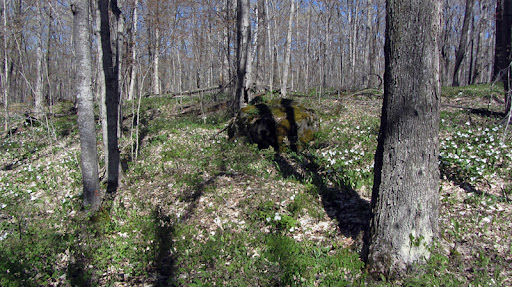 I was now on the lookout for the "Axe-Wielder's Clearing," though Ruchhoft says that the house of the "Axe-Wielder," whose real name was Keewaydin, no longer stands. Ruchhoft describes Keewaydin as a "modern Indian," who was so skilled with an axe that his feats in splitting wood were legendary.

Allegedly his skill improved after a few drinks, and he was reputed to have had the only cabin on the island with perfectly straight walls. I did find what I thought to be remnants of some structures, though I am not sure what or who they belonged to. The first looked like some kind of agricultural items, boxlike, perhaps related to beekeeping or botanical experiments? 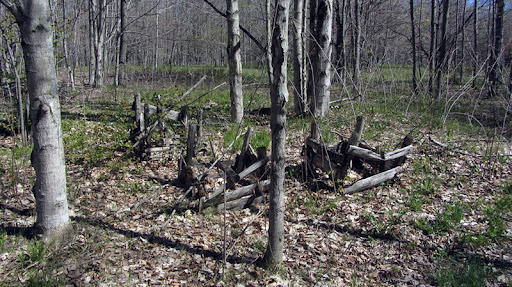 Here was what could have been a cabin or shed, at the edge of the clearing: 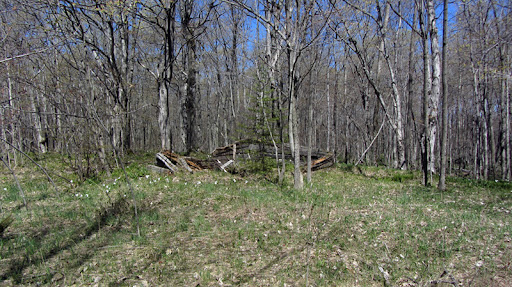 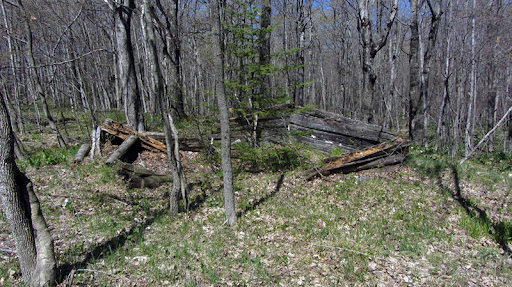 Several yards away was this smaller ruin: 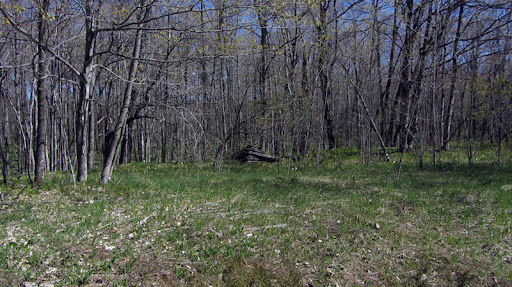 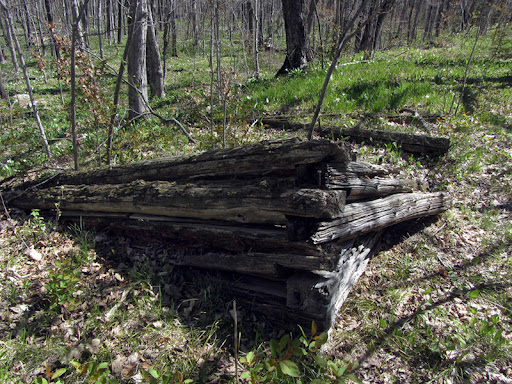 And behind it was a depression like those I had found on High Island, probably a root cellar:

A modern wire nail (as opposed to a black-smithed spike), indicating this structure was either built or repaired within the 20th century: 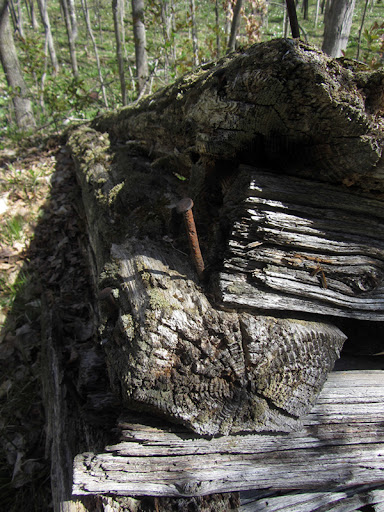 Ruchhoft also wrote that the schoolhouse which had served as the namesake of the next clearing, the Schoolhouse Clearing, existed only as a "few shattered remains" hidden in a copse of trees at the edge of the field. The north end of Minis Gitigaan was popular with several families of Danish immigrants who moved here from a certain part of Denmark back in the 1900s, taking a shine to it because it reminded them of their homeland. They had all been acquainted back home, and one family followed another, and their enclave represented the only significant white attempt to settle Minis Gitigaan.

The Schoolhouse Clearing was also my next waypoint; in the center of it I should find a fork in the path leading to either the Boatbuilder's Clearing, or the Dane's Farm. My intent for now was to go left and head to the northwest corner of the island to see what ruins remained there, slowly working my way down the shoreline to eventually pick up the trail again and return by the right fork.

I am not sure I ever did find the Schoolhouse Clearing however. I did find a fork, and there was another trail marker there but the "YOU ARE HERE" map was missing. Even though I was not in a clearing, I assumed I was in the correct place and that it was merely regrown, so I took the left fork (faint and barely legible though it was), and continued hiking.

Can you spot the trail? 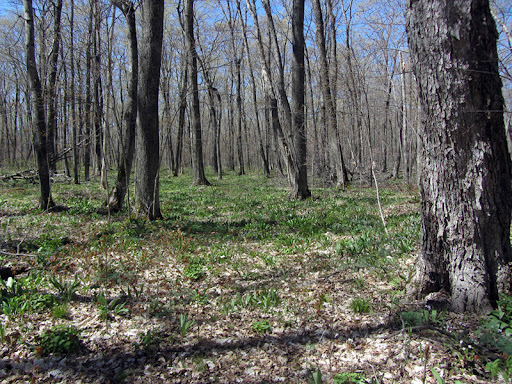 This reminded me a bit of Pete Monatou's Trail, because my only clues were the apparent spaces or avenues between the older trees, and from aging evidence of trail-clearing that had been done in the past, namely finding sawn logs on the ground: 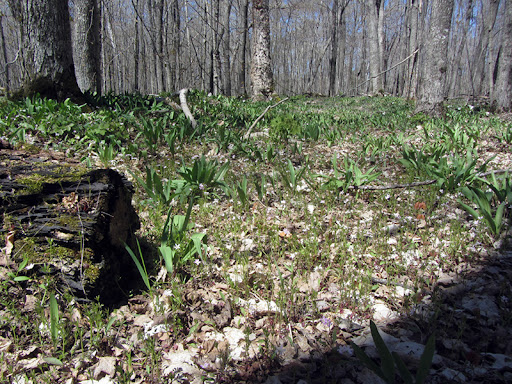 They were sawn a long time ago, but you can tell they were definitely cut and not merely broken. 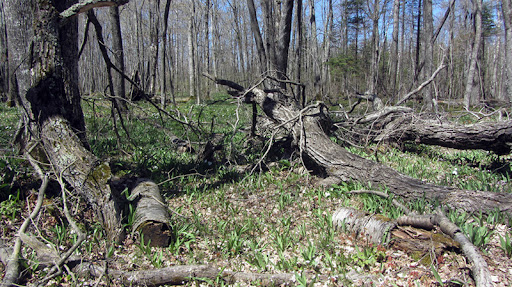 Even these clues were desperately sparse however, and I was obliged to keep a constant check on my compass bearing. As I began to come back within the girdle of the coastal cedars however, I found at a certain sudden point that the trail dissolved into nothingness. Despite my best efforts, I could not determine any direction it might have continued in, though I circled and circled and tried observing things from different angles. 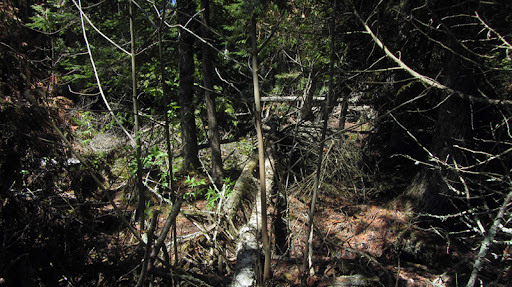 It was just gone. And I was too far down it now to bother going back, so I decided to pick an azimuth bearing and blaze my way to the shore. Unfortunately I was now surrounded in cedar swamp. I was really curious as to how I had lost the trail, or what trail I had indeed been on, if not the correct one. Oh well, only one way to solve this now--get to shore. I felt pretty confident that I could bushwhack this swamp easily enough; judging by the hints of blue sky ahead I felt like I was maybe only a couple hundred yards from the lake. I could already hear the distant surf. This was going to suck, but oh well. 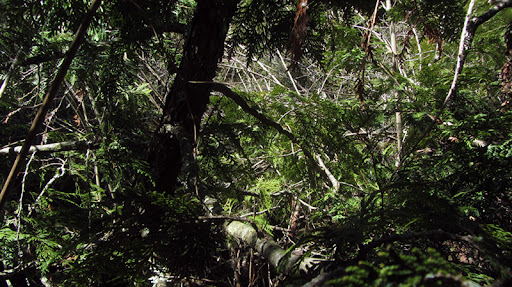 I barged my way through the dense overgrowth like a gorilla, thankful that I had in fact lightened my pack before starting out this morning. I balance-beamed over giant fallen rotting trees to avoid getting sucked into the bog or getting a twisted ankle, and kept checking my compass every few minutes. Sure enough, heading northwest was leading me to the sound of the waves, so everything seemed to be lining up correctly.

Much to my chagrin this morass didn't seem to be coming to an end as quickly as I had estimated. After 30 minutes I was still pushing my face through the thicket of slapping boughs and climbing over the jumble of loose logs. The branches were grabbing at my gear and holding me back with all their might, and I was working up a sweat fighting for every inch. Too late to turn back now.

Finally, I emerged into the daylight again, surrounded by the deep blue arc of the great lake. Ahhh. 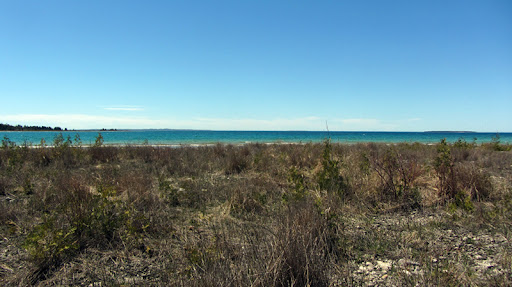 I sat down on a rock and took off my pack to rest and remove the handfuls of cedar potpourri that had accumulated in every one of my pockets and folds of my pack. Here is the wall of trees I emerged from: 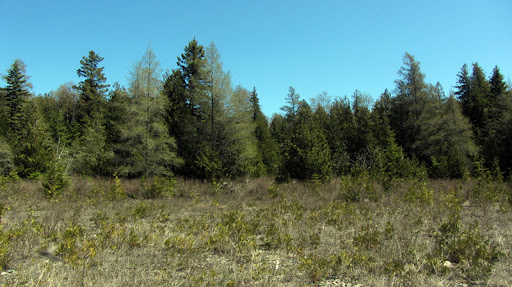 Something strange occurred to me however. The distant island I could see on the horizon immediately across from me looked familiar…it looked like High Island: 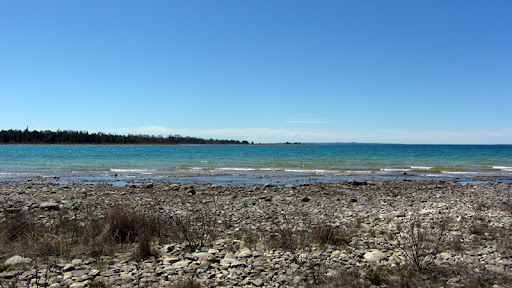 Sure enough, the extremely unique silhouette of High Island's bumpy dunes stood before me on the horizon. There's no other island that it could be. The smaller shapes of Whiskey Island and Squaw Island appeared just north of it, no mistake. But, if that's the case, then…I am on the western side of the island, not the northern end. Uh-oh.