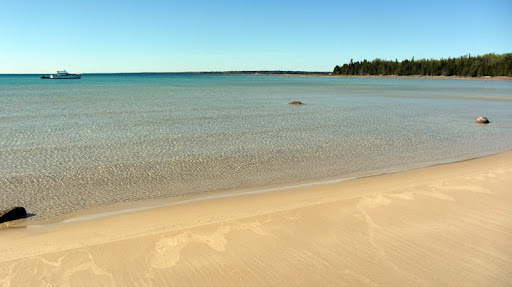 I sat down on the picnic table at Northcutt Harbor with extreme stiffness and watched, panting, as Jon shut off the motor, dropped anchor, and untied the landing boat. From across the water I could hear him whistling cheerfully as he prepared to come ashore. Ahhh….what a beautiful day.

As Jon stepped ashore, he asked me with an exuberant candor how my stay had been. Perhaps he did not see the extra gray hairs on my head, or the deepened worry lines carved into my face by this ordeal, haha, as I struggled to prepare a suitable response to his ironic line of questioning. I heaved a sigh and slowly groaned, "This place took me to f@#$%n' school, man."

The description lasted until we got all the way back aboard the Liberty, and continued in great detail well after we had gotten underway out of the harbor. He was just amazed at my reports on the trail conditions, but he was absolutely astounded at the amount of distance I had covered this morning. "God damn, that must have beat your feet up something terrible, walking on all those rocks!" He also said that he would look into doing some trail clearing, ASAP. I estimated that it would take several guys with chainsaws and at least five gallons of gas to make a dent, to which he again widened his eyes in amazement and pondered assembling a posse of Beaver Islanders to come help out since the DNR does not allow motorized equipment such as Bobcats on the island. 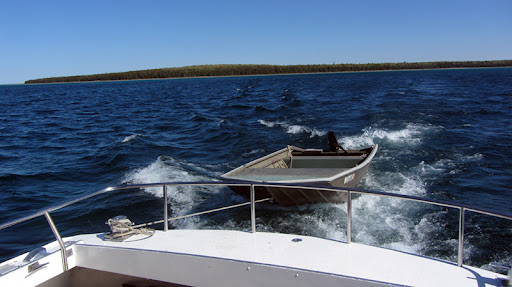 I laid back in my chair and watched the mysterious island shrink behind us. It reminded me of the time I had done this exact same thing when sitting on the ferry leaving Isle Royale after surviving my ordeal there...the kind of over-the-shoulder look you give when you stumble away from a fistfight that that you just lost. 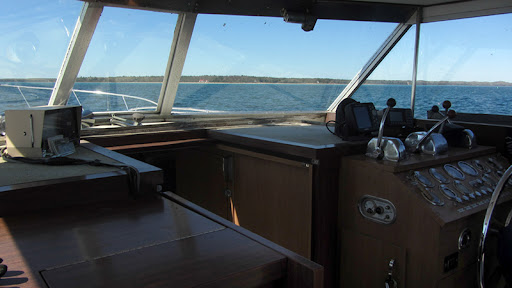 My trip was not over yet, however. I still had about a day left on Beaver Island before my return to the mainland. I would spend this evening there and leave early in the morning on the first boat to Charlevoix. There were a few things of interest within walking distance of St. James Harbor that I could check out at my leisure.

Once we had docked at Captain Bonadeo's place again we decided it was time for breakfast, so we headed down the street of the sleepy little town to the local eatery. I ravenously consumed a large portion of island-priced people food, having been on the all-nut-&-berry diet for too long. Coffee was a welcome substance in my system as well, as Jon and I chatted at length about Detroit stuff. After we parted ways I made my way to the local chamber of commerce, which is a minuscule little building. The only maps of the island they had were humongus, and cost $5…whereas my pocket now contained a scant $3. So the guy in the office allowed me to take a picture of the one on the wall for free: 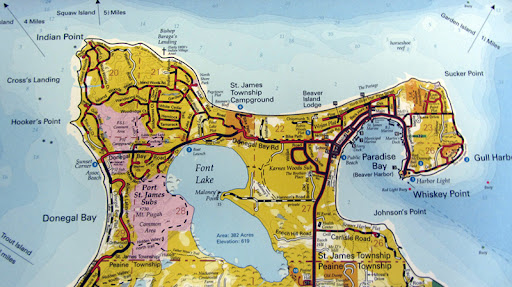 All I needed was the top portion anyway, since I wouldn't be able to go any further than that without a car. Both this guy and Jon had told me there is a public transport bus/van that you can call to take you pretty much anywhere you want for free, and I pondered doing this in order to visit the lighthouse on the southern tip of the island, but decided to stay in the northern end. Today was going to be a lazy day, because I was now feeling very tired. It was only 11:30am, and already I had done more hiking this morning than I usually do in an entire day. 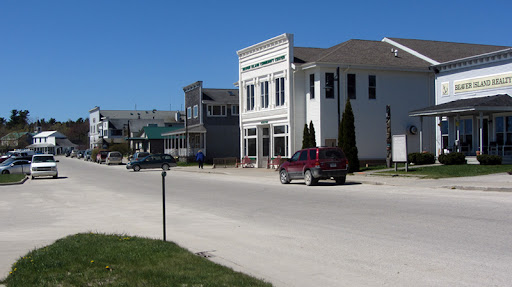 Jon had asked me what my plan for lodgings was going to be, and I said that I planned to camp somewhere. He informed me that there was a large sand dune to the northwest of his dock, up Donegal Bay Road, and half a mile from that was a campground and a county park. This sounded good to me. I began walking up the street to the end of the main drag, where the Mormon Print Shop still stood. 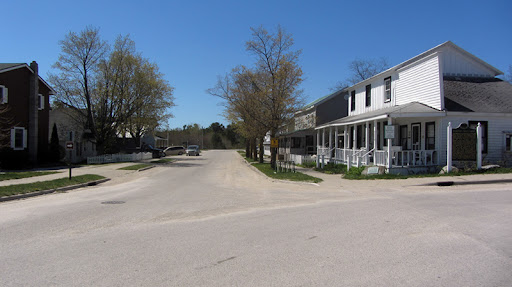 It was the sole remaining building on Beaver Island that dates to the days of King James and his Strangites. Today it is the island's historical museum. 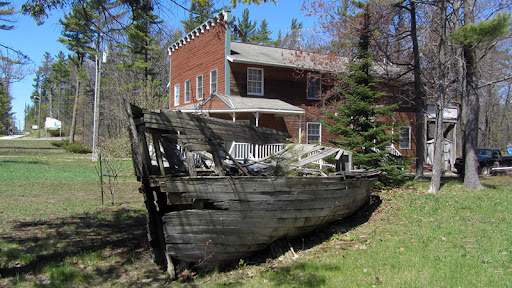 When I finally reached the campground, I was very tired indeed. But I realized that I still only had $3 in my pocket, and that the campsite fee was $5. I guess I could just camp without paying, but I decided it better to just stealth camp somewhere else nearby instead. There was a very nice view over a cliff here, and the cool perfect breeze drifting in off the water to rustle the shade-giving trees was absolutely heavenly. 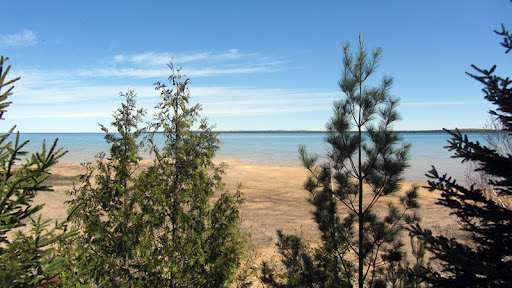 I sat my heavy pack down and laid here against a stump for at least two or three hours, just daydreaming and relaxing with my socks off. No one else was around. The island that is in view across the water is the one I had just come from, Minis Gitigaan.

After I felt like moving about again, I decided it was time to check out this dune. The abandoned cell tower sat next to it. Jon had pointed this out to me from the water yesterday, blaming it as the reason why his phone doesn't work as good anymore. 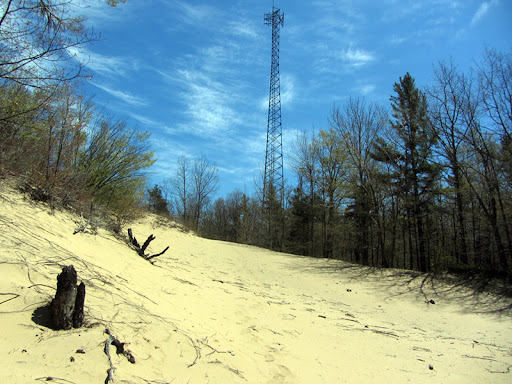 I pondered climbing it for the assuredly kick-ass view that must be had from up there, but it was surrounded in a big mean fence that looked troublesome to climb at best, so I let it go in favor of lounging about on this nice warm dune sand for a couple more hours.

A few yards away was Font Lake: 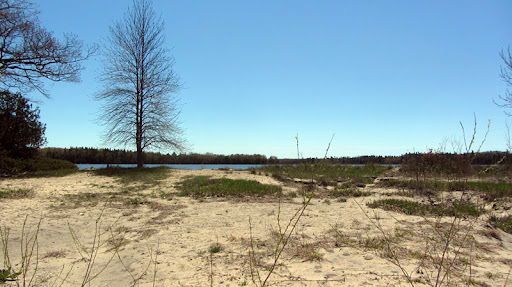 I noted that the water level seemed curiously higher than the ground I was standing on at the bottom of this large sand bowl. In the wooded glen immediately adjacent to this dramatic dune area I found a nice place to hide my pack, and potentially set up my stealth-camping spot for the night. But I still had several hours to kill before the sun would be down. I decided that an unencumbered hike out to Indian Point would be just the ticket to burn some daylight and see some sights. 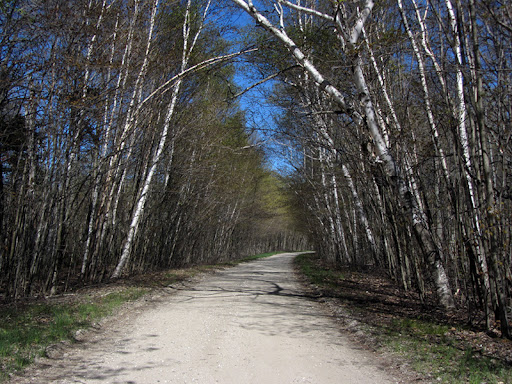 It was about a five mile walk from where I was. The significance is that this was a place of council for local tribes going back to ancient times, if I recall correctly. 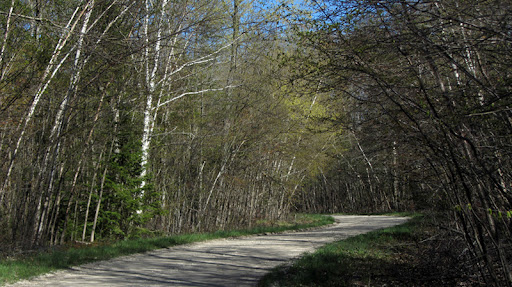 What I didn't realize is that it was now all private property basically. I also got confused by the "road system" here…I would wager it was put together by developers, not a road commission. Case in point, Indian Point Rd. does not go to Indian Point.

Anyway, I set out and ran into a weird old geezer with a long scraggly beard and a walking stick out for a stroll with his wife as I was sitting at a confusing crossroads trying to analyze the picture of the map in my camera's viewer. He asked where I was trying to get, and said that I would be better off following the shoreline. I didn't mind that idea at all but it seemed to me that it was all private. He pointed me back to where I had come from and said to walk down in the woods over there and that's how you get there. He said you have to cut through private property but it's okay, everyone does it.

So that's what I did. Immediately I came to the dead-end which looked mysteriously like a driveway. The house looked dilapidated like it was abandoned, and this old Opel with an Ohio plate sat next to it, so I figured this was the ticket--clearly no one had been here in a long time. 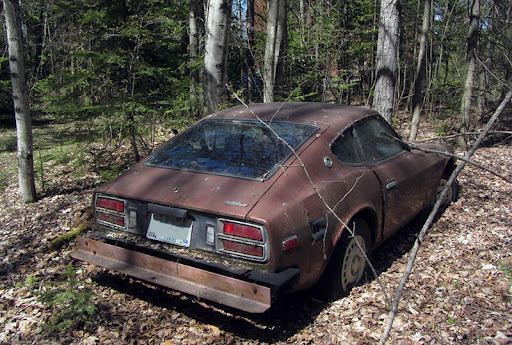 The old man had said to go past where the driveway ends, and cut down to the beach so I did, cautiously as I entered the yard. Suddenly, I realized there was a man sitting quietly in a lawn chair here enjoying his waterfront view. Surprised, he asked me what I was doing. "Uhh, this old weirdo told me it was cool to cut through your yard, I guess?"

With a furrowed brow he told me that indeed I can get to Indian Point this way if I wish, but that this was private land. I sheepishly apologized and decided to just go back to the confusing roads. Anyway I did finally make it to Indian Point right at the peak warmth of the day, and removed my boots to bury my weary feet in the cool sand. 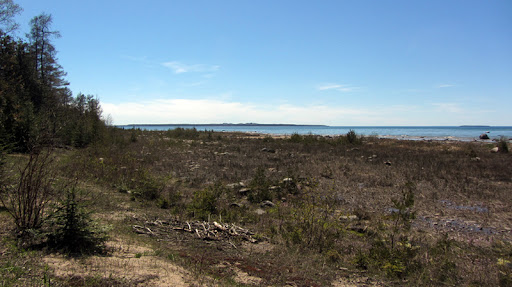 It was all private lots there too, but I managed to spot an undeveloped wooded lot for sale between two occupied ones and jumped into the trees to clandestinely make my way to the beach. In the shimmering distance past the clouds of midges, there was that humped silhouette of High Island again, beckoning from the horizon. 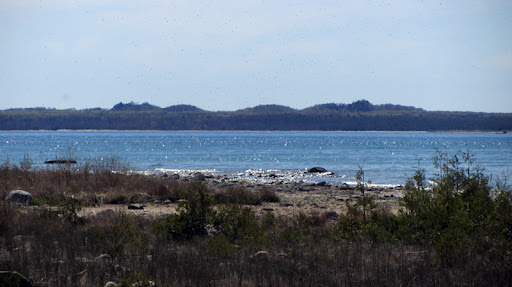 For some reason I had thought that there was something to Indian Point, like a huge sandy dune cliff overlooking the lake, or a historical marker, or...something. But there was nothing here of note except some gaudy modern house off to the left. I felt like I should probably have gone to see something else with my time. I made the best of it though, taking the opportunity to relax and soak in some rays for a couple hours before lazily making my way back to my camp.

When I arrived back, I spent more time laying on the warm sand reading from Ruchhoft's book as the sun went down on this phenomenally gorgeous day. I rolled out my bag and slept under a pine tree in the wooded hollow adjacent to the dune.


Day 5.
In the morning I awoke early and began hiking back into town to make sure I got a ticket for the first boat to the mainland. 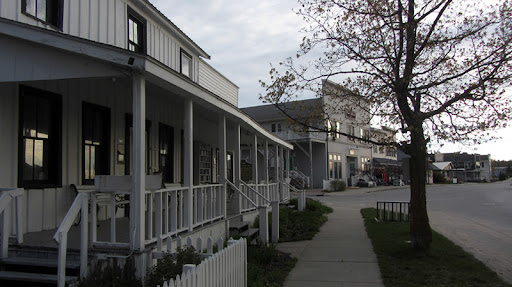 Next to the old Mormon Print Shop I noticed the remnants of the old Beaver Island Jail, built in 1910 and burned in 1930: 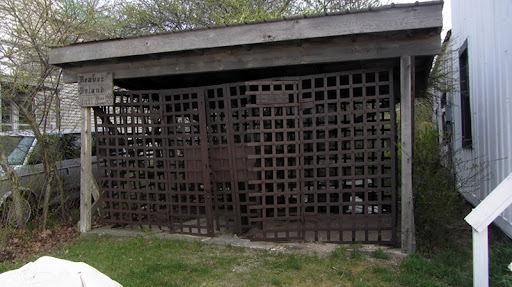 Barely visible is the maker's nameplate stating it was made by Adam's Steel & Wire Works, Joliet, Illinois. 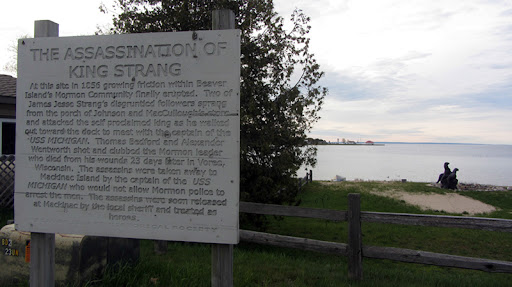 It was a gorgeous morning in the harbor. I sat sipping some free coffee from the ticket office as the ferry was loaded with cargo. 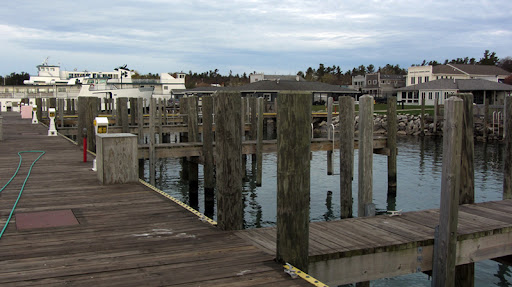 The winds coming off the lake were quite brisk, even a little too cold to stand out on the deck as we got underway. 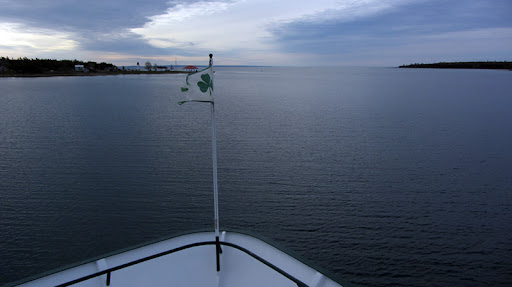 A little side-story regarding the Irish culture here. In 1938, according to the Lansing State Journal, Alan Lomax, an agent of the Library of Congress’s Archive of American Folk-Song recorded two versions of a c.1874 ballad called “The Gallagher Boys,” about the brothers Johnny and Owen Gallagher and their friend Tommy Boyle, who had tried to sail back from Traverse City in a storm and were lost on Lake Michigan.

One of the singers was Dominic Gallagher, whose father had sailed to Traverse City with the Gallagher boys but was convinced by the captain of another ship to wait out the storm. Dominic recalled "seeing his father walk very much alive into what was supposed to be his wake." You can listen to Lomax's recording of the ballad HERE. 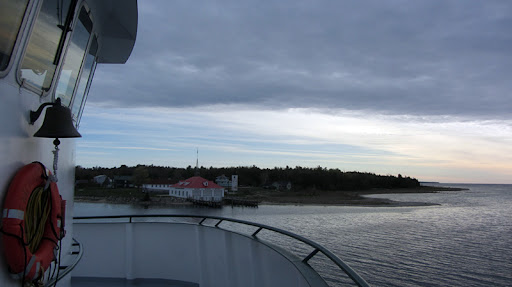 The piers of the Mackinac Bridge, seen in mirage to the east: 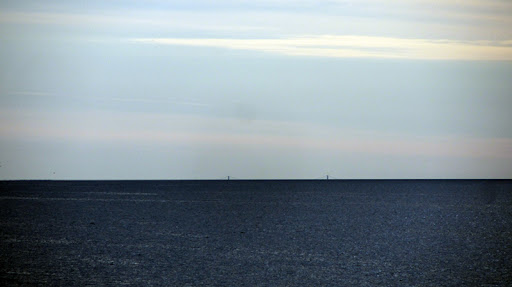 The lake was eerily placid and reminiscent of my return trip from Isle Royale: 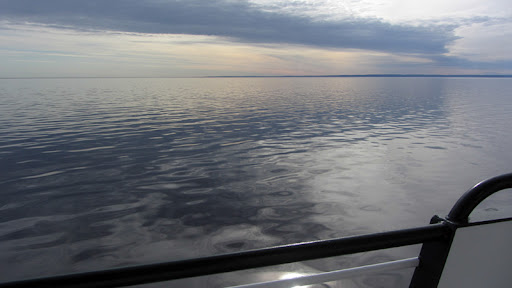 The 130-foot ferry built in East Boothbay, Maine rode perfectly flat, and again I was nearly the only person aboard on this ride. As we continued south, the image of the Mackinac Bridge, over 37 statute miles away, was swallowed up in maritime mirage as it went behind the bony arm of Waugoshance Point: 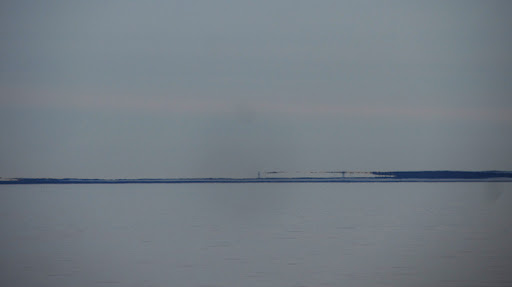 Around that time I also sighted the tower of what I can only imagine to be Waugoshance Shoal Light, or Ile Aux Galets Light, both essentially abandoned. 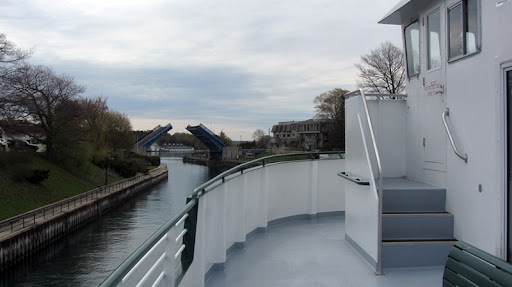