Into the Den of the Demon Rum

The city of Detroit actually has islands within it…and I don’t mean Belle Isle, or Fordson Island, I mean up in the neighborhoods of the east side. There are five: Grayhaven Island, Harbor Island, and Klenk Island, as well as Riverfront-Lakewood Park, and Mariner’s Park, though you’d be hard-pressed to recognize them as islands at a casual glance. They all reside near one another, in a neighborhood called Fox Creek, or "Creekside," near the border of the Grosse Pointes (MAP). They were actually carved out when canals were dredged through this neighborhood in order to better accommodate residents of a nautical persuasion, so they aren't true islands per se. Nonetheless, they are a nifty little feature.

I learned of this canal neighborhood probably six or seven years ago when the area caught my eye on a map. Driving along the main canal down Alter Road, I spied through the deep overgrowth what looked like a tunnel sticking out into the water…perhaps even an old Prohibition smuggler's tunnel...?  I planned to someday return for a closer inspection, though I held no especially high hopes of accessing the tunnel, as this was a pretty sequestered neighborhood; the islands are so small that people who don’t live there would easily be picked out.

Getting Sloop into action with his canoe was the perfect way to effect this investigation. This was just such an interesting little corner of the city anyway; what better way to explore it than by boat? Our trip to Peche Island the day prior left us wanting more, and since the boat was already lashed to Sloop’s truck we figured why not take it out again early the next morning too?

I rolled into the neighborhood just after dawn, and Sloop was not too far behind. I scoped out some good places to launch. A local guy was casting into the creek, and we chose an old abandoned boat well next to the old abandoned party store / bait & tackle store to toss our canoe into the water.

Somehow we managed to completely miss the actual boat ramps less than 100 yards from this spot. I blame inadequate coffee.

Beyond the bridge there is access to the main body of the Detroit River:

However, we were here to snoop about these canals, and maybe catch some garbage fish. 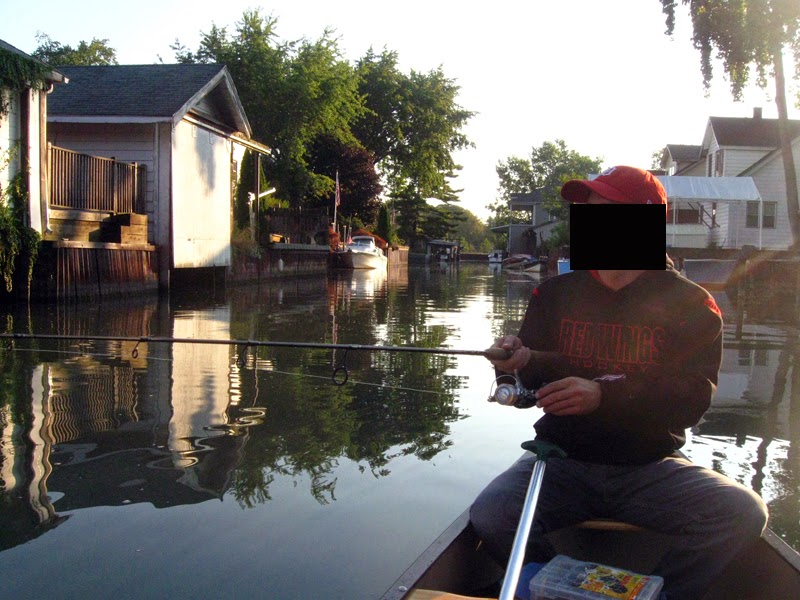 Pretty much everyone agrees that the canals were used by rumrunners as a convenient means of evading and hiding from revenuers during Prohibition. The quick and sheltered access directly from the water to private residences no doubt made it hard for revenue men to intervene in time to stop a smuggling run. One blog asserts that at one time there were even "many more" canals than there are today, "offering prime hiding spots for the rumrunners, but over time they have been filled in by erosion." I have found that mentioned by at least one other source as well.

For most of America, the Prohibition Era lasted from 1920 to 1933. But Michigan banned the sale of alcohol in 1917, becoming the first state to do so. Part of the reason that most of the nation's illicit booze flowed in from Michigan was because we had three years of smuggling practice already by the time it hit the rest of the nation.

According to the detroitarchitectjournal written by Robert Saxon, Jr., the Fox Creek takes its name from the Fox tribe of Native Americans. As I mentioned in my earlier post about Maheras Park there was a battle here in 1712 known as the Fox Creek Massacre, wherein the Fox warriors attacked Fort Pontchartrain under pretense of securing a British alliance against the French. The French defenders and some of their native allies pursued the Fox party all the way to this spot where the battle took place and up to 200 Fox tribesmen were slain, depending on which source you adhere to. A historical marker stands in Grosse Pointe, but that is not where the battle occurred.

Robert Saxon, Jr. goes on to say that by 1750, the area was sparsely settled by both Native Americans and French settlers. In 1837, on the site of an old windmill, the Windmill Point Lighthouse was built to help guide the increasing amount of steamship traffic. With the expansion of Detroit, the bucolic Grosse Pointe area became the summer resort of choice for the budding city's elite, and the draining of the Grand Marais swamp began in 1874 (shortly after which the Windmill Point Lighthouse was rebuilt).

In 1880 Saxon says, the Wayne County Drain Commission first authorized the conversion of Fox Creek to a canal. In 1907 the city of Detroit annexed this land, which had previously been known as the village of Fairview, amid concern that Fairview's sewage dumped into the Fox Creek would contaminate Detroit's drinking water. Between 1913 and 1918, the Detroit Motor Boat Club and the General Aeroplane Company both occupied this area next to Windmill Point; General Aeroplane was a commercial airplane builder.

Saxon says that in 1918, William C. Klenk bought about 100 acres of this area for the development, which on the whole was known as the Grand Marais (Great Swamp), and created "new waterfront housing opportunities" by digging three canals where the Fox Creek Canal met the Detroit River, creating Klenk and Harbor Islands, which continued to grow through the 1920s. I have also heard however via other sources that the canals were almost complete as early as 1907.

The canals were built in part with public monies and originally they were going to be accessible to the public. But legal issues arose later when Mr. Klenk sank barges at the entrances to the canals to keep people from "boating by." The matter went to the Michigan State Supreme Court, in the case of Lapire v. Klenk. Via a state document I was able to verify the date of this case as 1914, so it would seem that the canals did indeed exist at least in some form prior to the start of Prohibition in Michigan in 1917.

The court sided against Klenk, and the canals have remained publicly accessible. Allegedly another canal existed connecting the Fox Creek to Connor's Creek, but was refilled by Klenk at some point.

Some expensive seawall damage due to neglect...

On another trip one year later, I passed this same spot and that sailboat had sunk in its place. I wasn't able to get a photo however because I was the one driving. 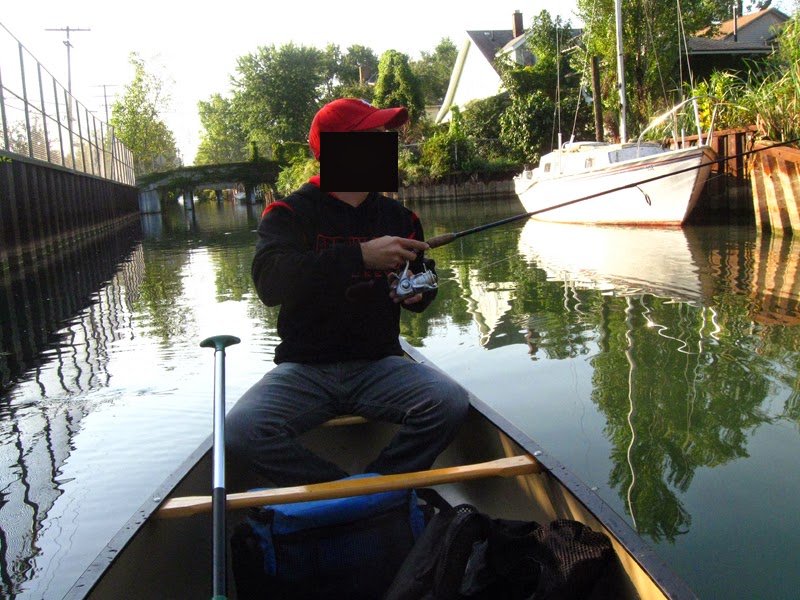 I read that at least one building stood in this area before the canals were dug, and that was Klenk's Lighthouse Inn.  Naturally Klenk dredged around his inn, forming Klenk Island. A thread on the DetroitYes forum indicates that Klenk's Inn was what actually later became the Detroit Motor Boat Club. Looking at Klenk Island today, I don't see the Inn or where it would have sat, unless it simply looks like a normal-sized house.

According to the recent book Detroitland by Richard Bak, the famous pilot Charles Lindbergh's ma lived at 178 Ashland, on the Fox Creek. There she "awaited the word of her son's victory or death," according to an article in the New York Times for May 22, 1927 printed following news of the first solo trans-Atlantic flight.

"Mrs. Lindbergh, who teaches chemistry at the Cass Technical High School, conducted her classes as usual yesterday," the article went on to say. She was at home when she was given the news, and was met by reporters from all over the world, and in the following days many curious onlookers "happened" to pass by her house on this dead-end street. The tulips, and the cherry tree she was standing under while talking to reporters are no longer there.

One half of the foundation of this structure had apparently been undermined and gave way, sinking the one side.

I did my best to deal with the harsh contrast between the dark and light areas, so forgive these photos. 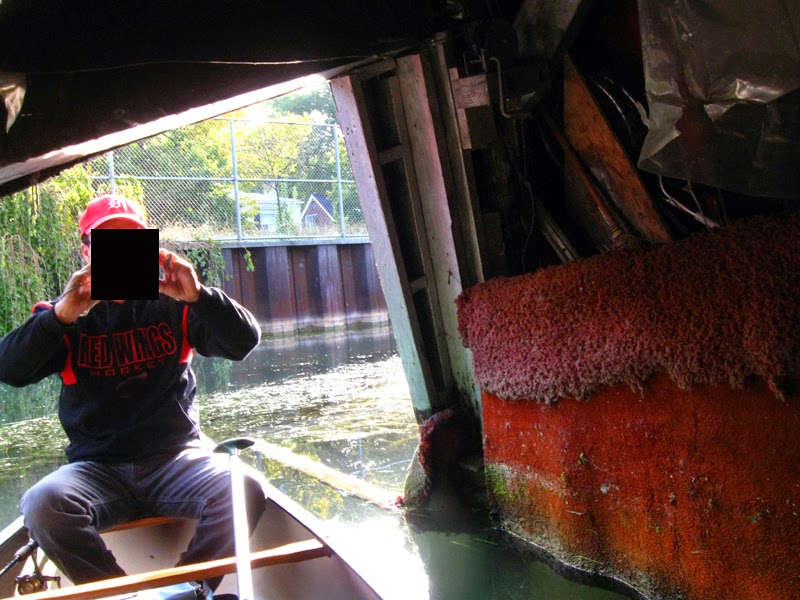 As it turns out it is also rather difficult to get a steady exposure when your platform is bobbing on the water. Again, I did the best I could.

Most of the properties along the canal were abandoned and completely overgrown:

Here was a secluded boat well that you could probably use for smuggling in the present day:

I found this to be one of the more charming boat houses:

I wonder how often there were Detroit-style boatjackings back when more people lived here? Seems like it'd be pretty easy to slip up in someone's boathouse at night and heist their watercraft. 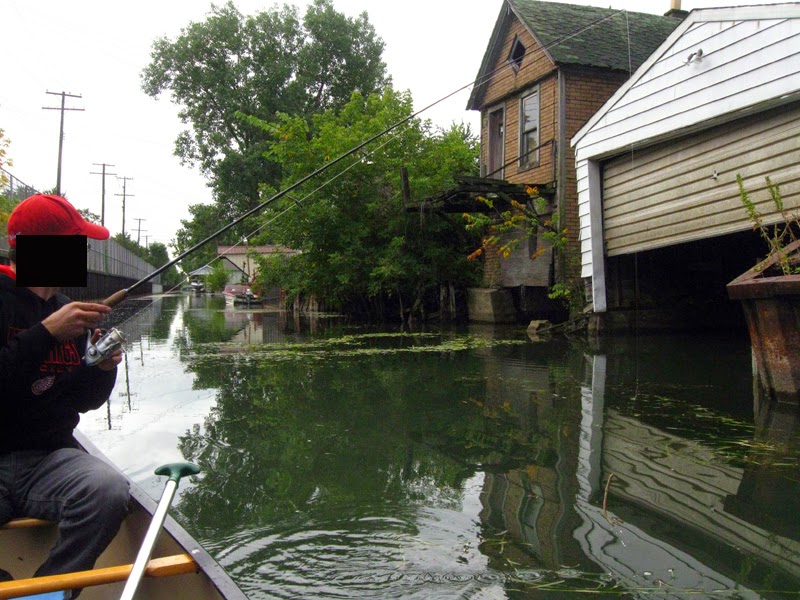 Another fork in the road; going left would take us back toward Harbor Island:

We chose to continue north up the Fox Creek. 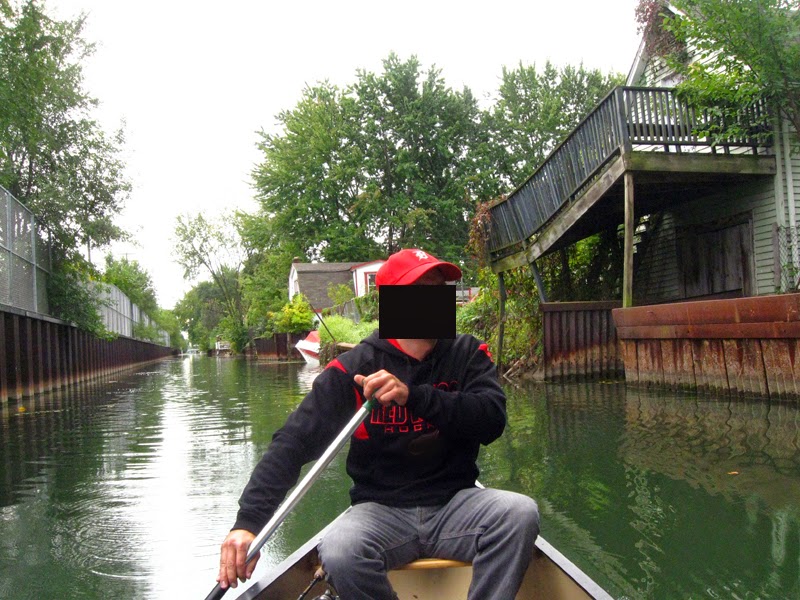 "What was that? Did you hear that? Sounded like banjos..."
"Paddle faster."

We were nearing the end of the Fox Creek canal, but I knew that beyond this fallen tree was where the supposed tunnel was that I wanted to check out, so we laboriously made our way under the monstrous trunk and through the branches. 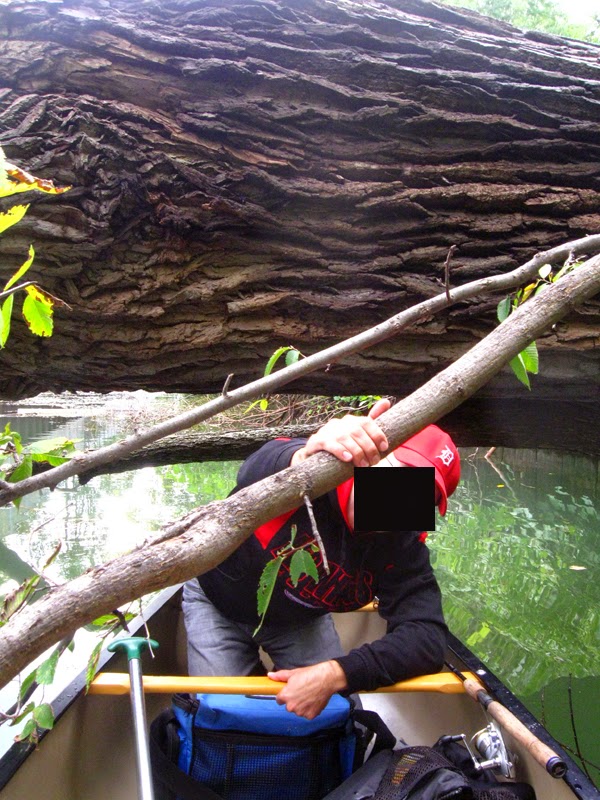 And here it was:

Well it certainly is a tunnel...

Huh...it looked like a staircase was at the other end:

Yep that's definitely what it was, unfortunately due to the tight quarters, it wasn't advisable to try and get out of the canoe to see where they led.

Which kind of makes me wonder about their utility...who would make a tunnel for boat access that doesn't have enough overhead clearance? But yet, the stairs were right there, so obviously someone had designed this for some kind of deliberate below-ground access purpose. It would be a pretty tight fit for most motor boats, so the notion of this being a rumrunner's tunnel seems challenged, but you never know.

All I know is carrying a crate of whiskey or a barrel of beer out of a boat and into that stairwell doesn't look like fun.

The tunnel dock belonged to the house on the corner lot where the creek makes a 90-degree turn to the west to go under Ashland Street. So essentially this particular lot has water access on two sides.

I want this house.

Wait, maybe this side door was where they unloaded their demon rum? 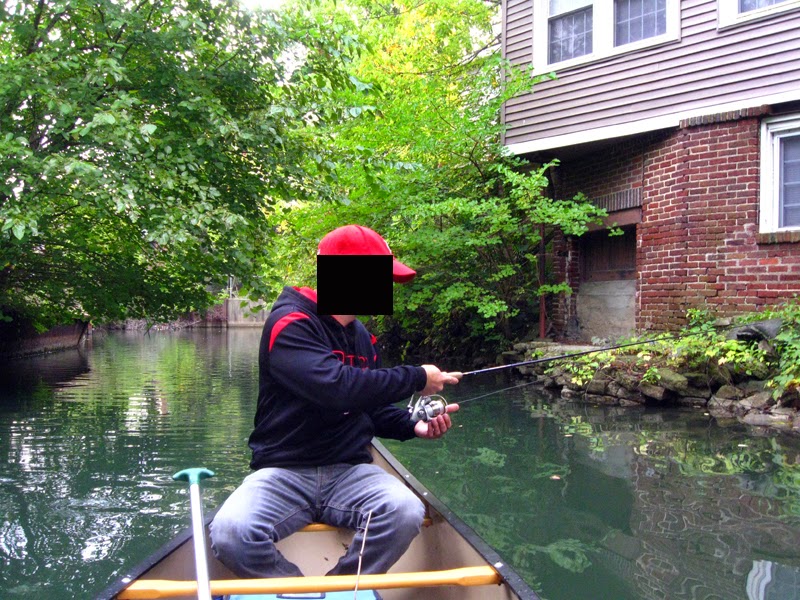 Now how sweet is that? A garage door that opens up onto a canal to the Detroit River and the Great Lakes? Yes please.

I believe this is either Manistique Street or Jefferson Avenue, and the creek is covered from this point north...the outfall is barred with an iron grating:

From what I understand it connects to the Connor Creek just west of here. At any rate this was as much as we were going to be able to explore of the Fox Creek.