A tall building at the corner of Highland and Third in Highland Park was once the Detroit Osteopathic Hospital. It has been listed at two addresses--188 Highland, and 12523 Third. We snuck in through an entrance on Third Street, so I'll go with that one. 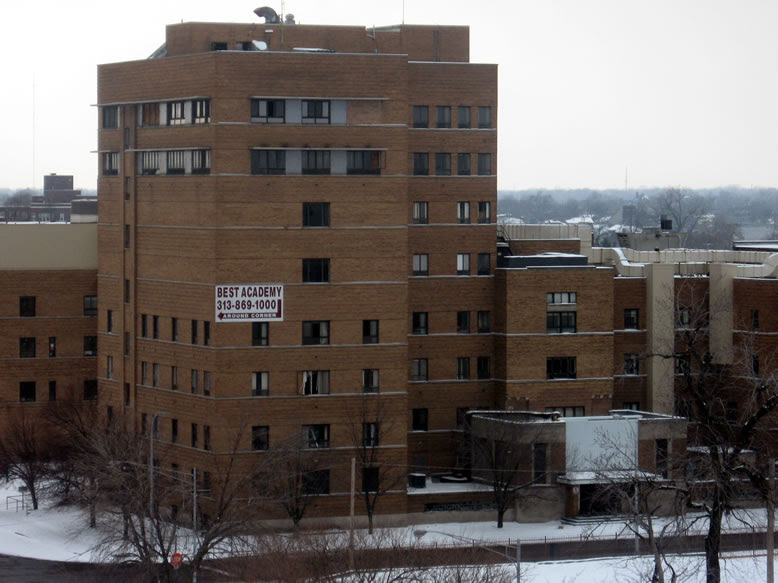 This place wasn't exactly abandoned when we visited...more like partially vacant; there was an educational center operating in part of it called the BEST Academy. 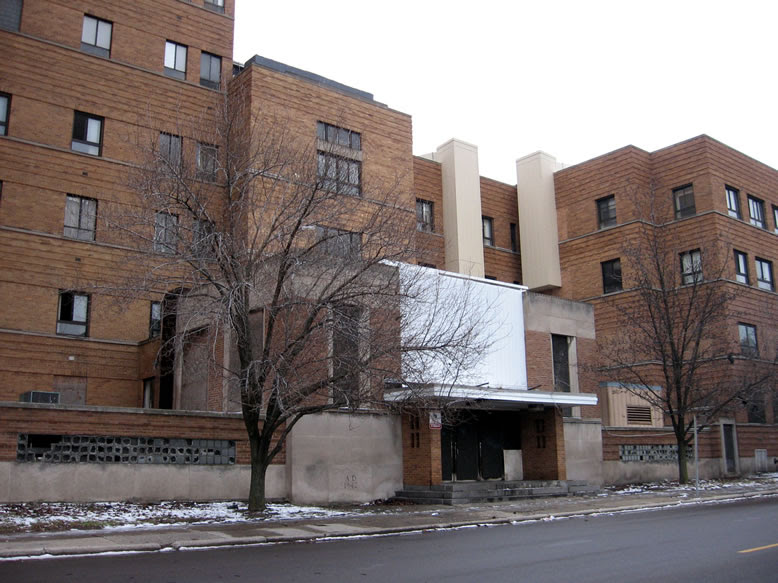 In case you were wondering what osteopathy is, Merriam-Webster defines it as "a system of medical practice based on a theory that diseases are due chiefly to loss of structural integrity which can be restored by manipulation of the parts supplemented by therapeutic measures (as use of drugs or surgery)." The word "osteo" itself is Latin, meaning of or relating to bones. 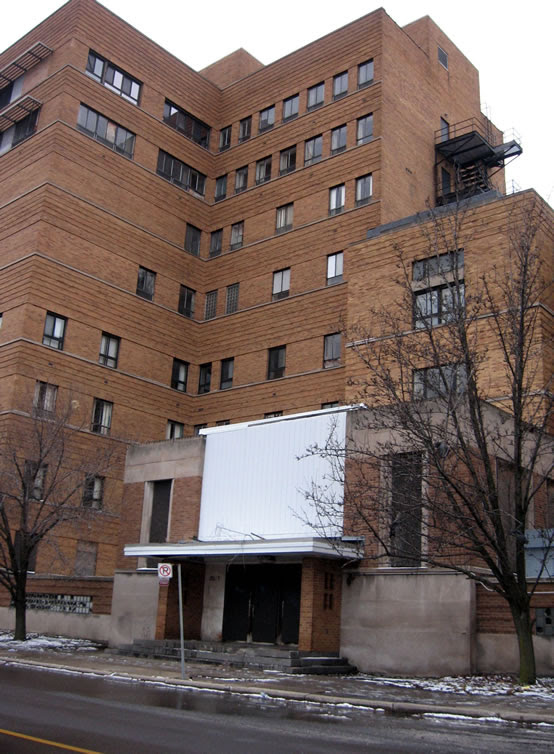 As Patricia Ibbotson writes in her book Detroit's Hospitals, Healers, and Helpers, Detroit Osteopathic Hospital (DOH) was built in stages, the first of which began in 1919, much to my surprise. I had assumed that this place was entirely built in the late 1930s or early 1940s, judging by the architectural style, but it turns out that the DOH started by building onto an existing house.

Judging by the photo in her book the eight-story tower was not built until after 1937, and perhaps as late as the 1950s. At any rate the lobby ceiling here was very much 1990s'd-out: 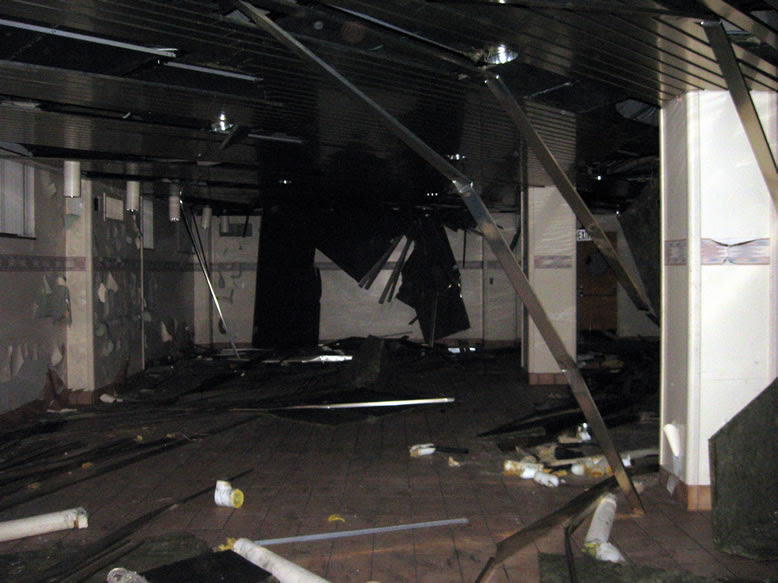 According to the book Osteopathic Tales by Arnold Melnick, Detroit was something of a hub of the field, since it had two hospitals dedicated to osteopathic medicine at one time, when most cities only had one if any at all (the other one was Art Centre Hospital). Detroit Osteopathic closed in 1992 when it was merged with St. John Detroit Riverview Hospital, which has also subsequently closed.

Sadly there wasn't much left behind in here like there was when I went through Greater Detroit Hospital a few years prior, but then again this hospital wasn't suddenly shut down by court order, it was merged with another hospital, so I assume most of the equipment and material was transferred or sold, instead of left behind. Looks like they left behind an incubator though: 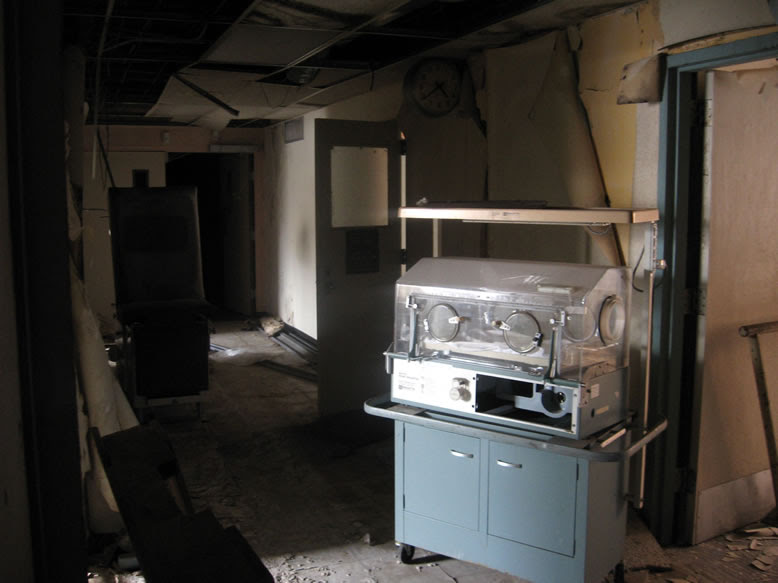 A book called The DOs: Osteopathic Medicine in America suggests that one of the problems that ended up hurting many osteopathic hospitals like DOH was their location. Because of population and demographic shifts, both rural and urban osteopathic hospitals found it difficult to continue operating, while those in suburban locations often faired much better, because that was where the wealthier residents moved to after leaving the city centers of places like Detroit, Chicago, and Philadelphia. The government reimbursement rates the hospitals received for providing care to the uninsured poor was lower than the reimbursement rates offered by privately insured middle-class patients. 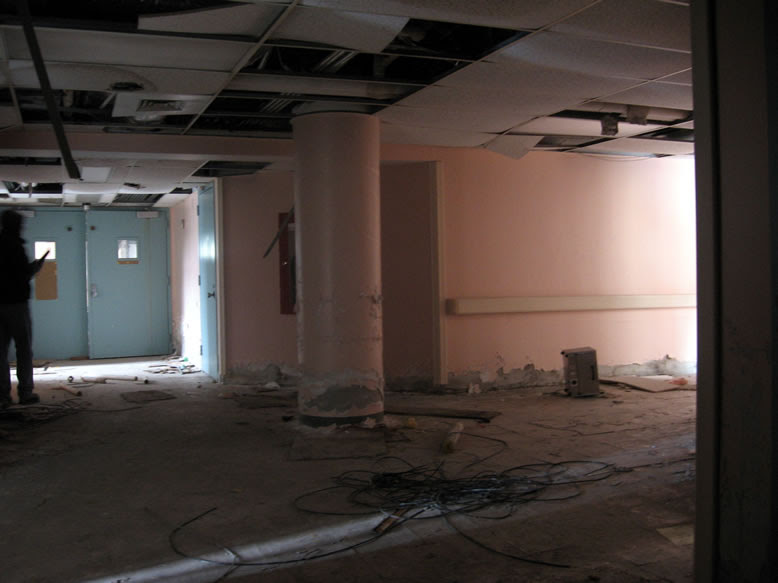 Another opinion piece similarly observed that due to the "elaborate system" of reimbursement now used by insurance carriers, the days of small independent osteopathic hospitals were gone. In it, an osteopathic practitioner named Dr. Niru K. Pandeya laments the loss of the dedicated osteopathic hospital in general, because it means that there are now fewer places where students can get real-world experience in that field of medicine while in university training. 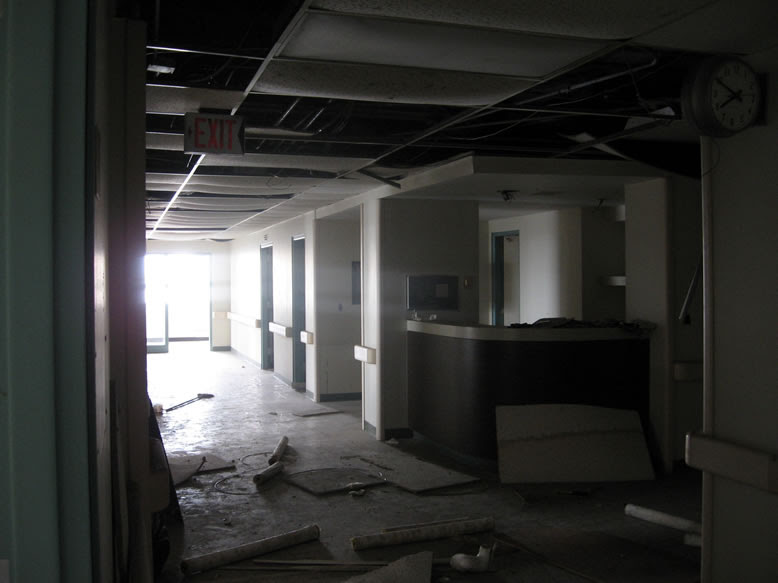 A Dr. John E. Upledger wrote an autobiography wherein he recalled his experiences in osteopathic medicine, and the time he spent interning here at DOH in the 1960s. "Detroit was one of those all-too-common institutions," he said, "packed full of patients, where the doctors had all the latest equipment, but where...very, very few physicians ever bothered to inquire about an ailment's primary cause." 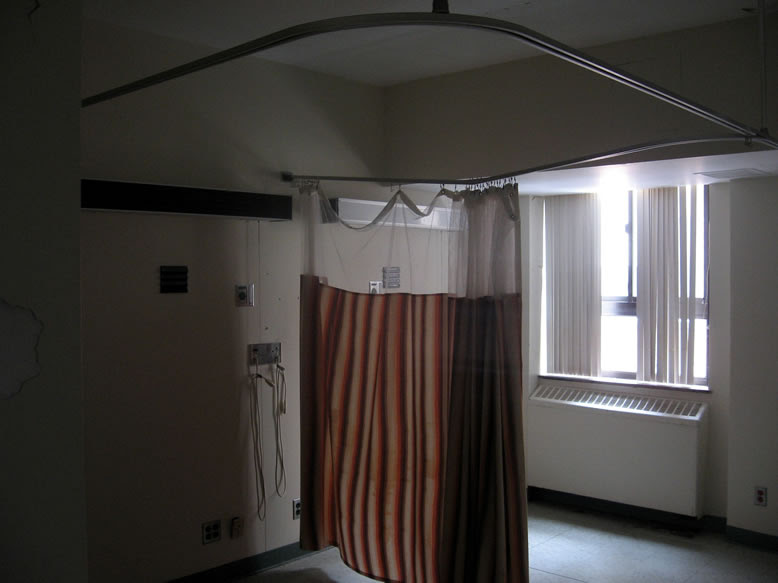 Upledger also alleged that there were a fair number of incompetent and corrupt physicians at DOH, and lots of malpractice that went unaddressed while he was interning there. I suppose that shouldn't come as much of a surprise to anyone, but maybe back in the '60s crappy doctors and bad hospital practices weren't taken for granted like they are today. 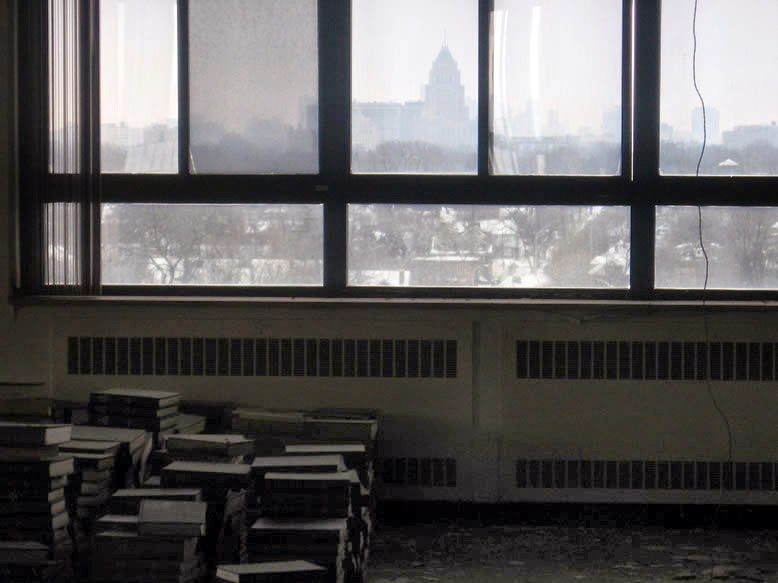 Ibbotson notes however that the team doctors for the Detroit Lions, Tigers, Pistons, and Red Wings were all staff members of this hospital. 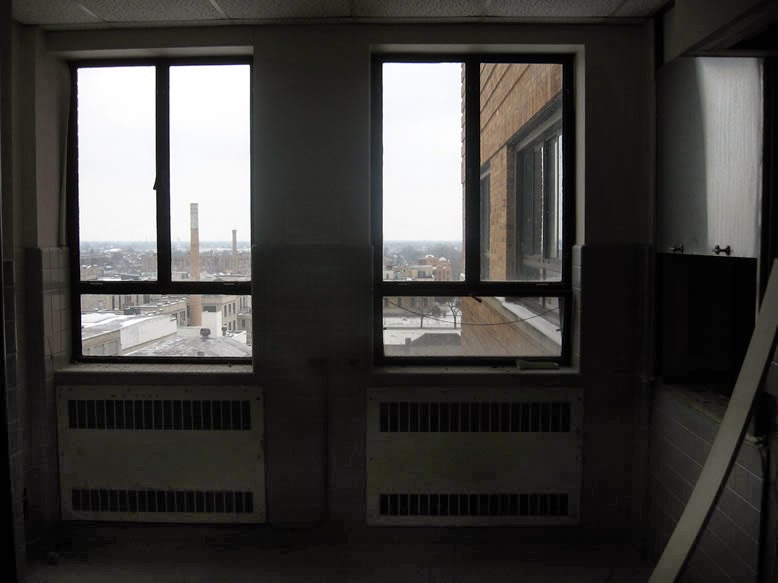 Unfortunately the windows in here didn't really open, and they all had these screens on them, making photos through them kind of tacky, so up to the roof we went. 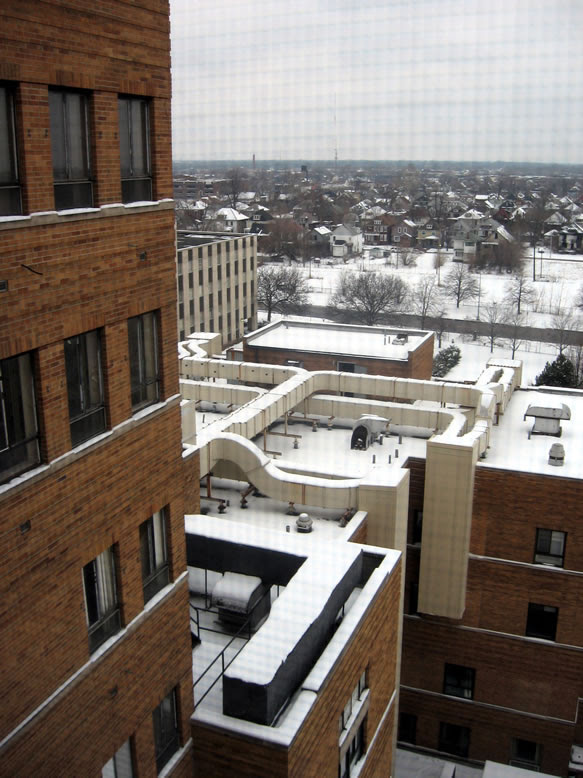 The addition of exterior fire escapes and a tangled web of ventilation ducting seems to imply that hospital building codes may have changed a bit in the last half century or so, heheh... 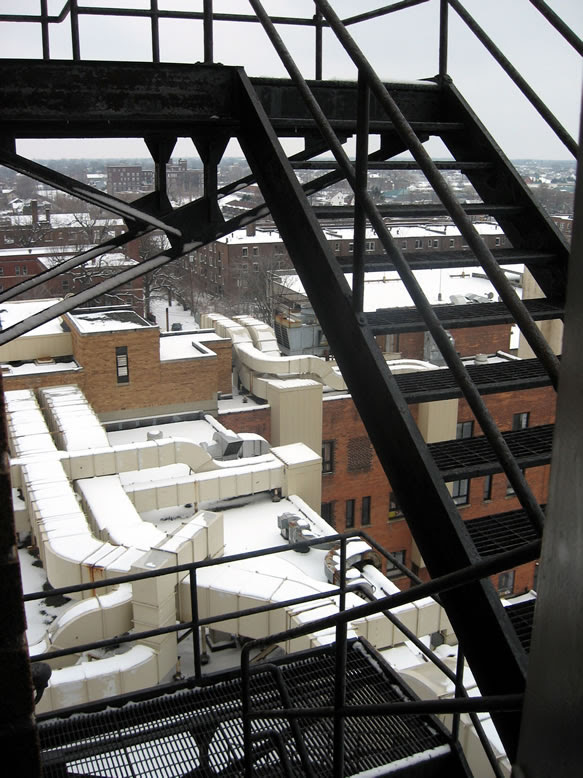 But it's not everyday you find a spot that's eight stories high, in a part of the city other than downtown. The view from here promised to be unique, and so far the most interesting thing about the place. Here was the Roselawn Apartments down the street, which we had just checked out 30 minutes earlier: 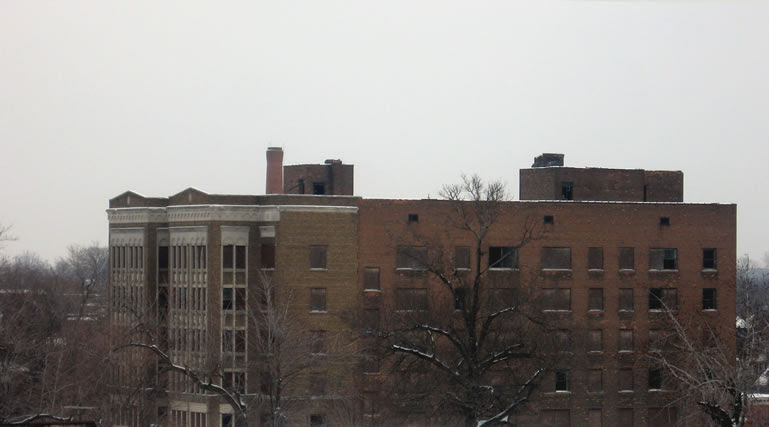 The chimney stack across the street goes to the boiler plant that fed this hospital, and I assume that if they had any backup generators that that's also where they were. 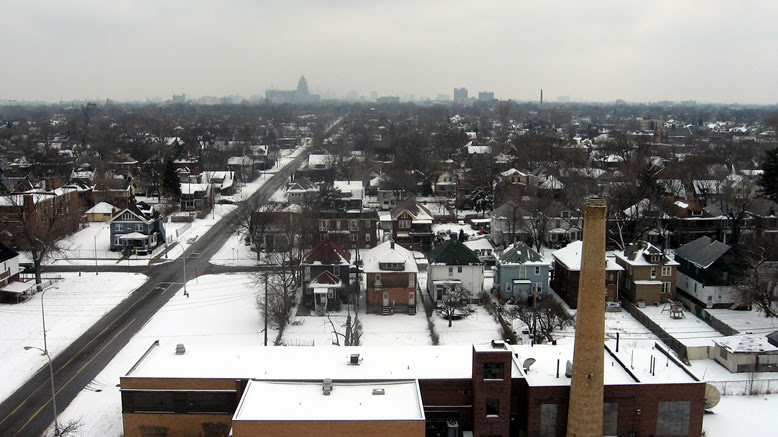 The tower of Henry Ford Hospital is seen in the distance, as well as the smokestack of Herman Kiefer Hospital: 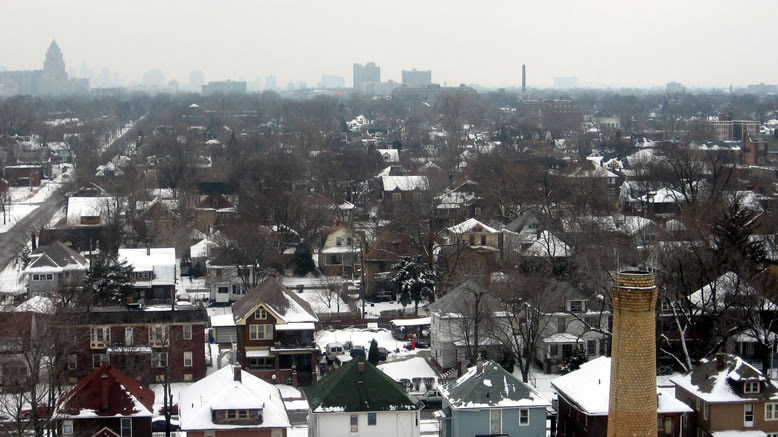 Like a medieval church the Cathedral of the Blessed Sacrament, seat of the Catholic Archdiocese of Detroit, lording over its surrounding feudal village in the geographical center of the city: 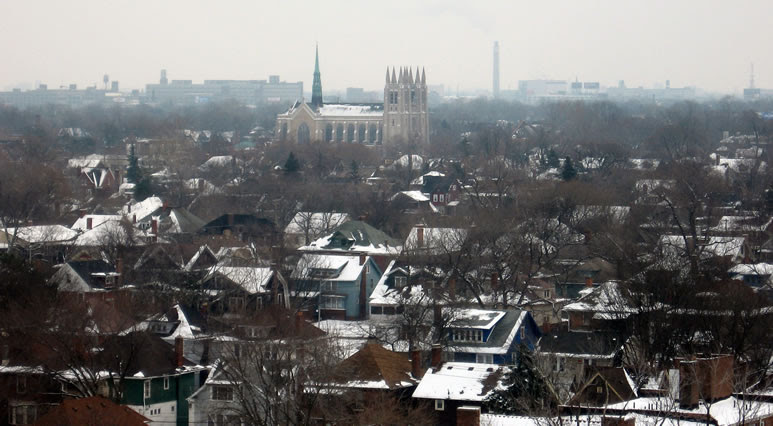 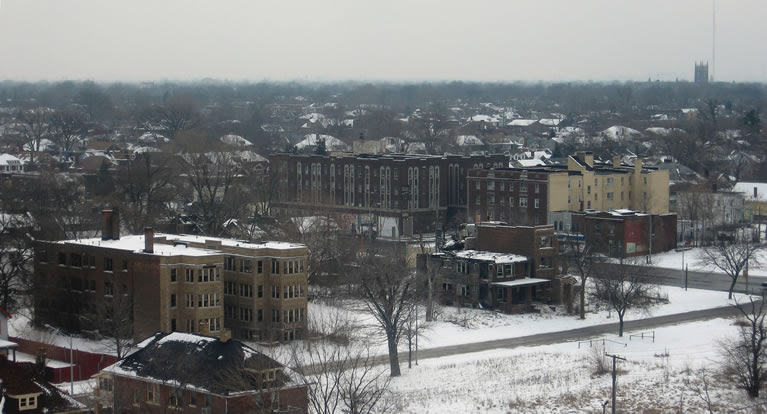 Here you can see the charred ruins of the Highland Park Fire Department station on Sturtevant: 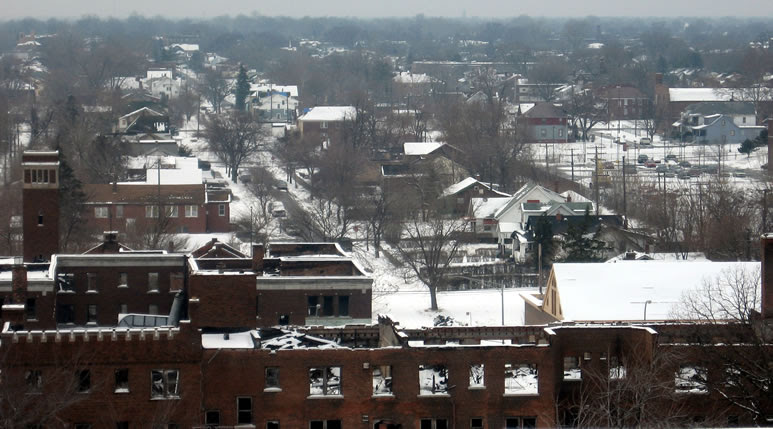 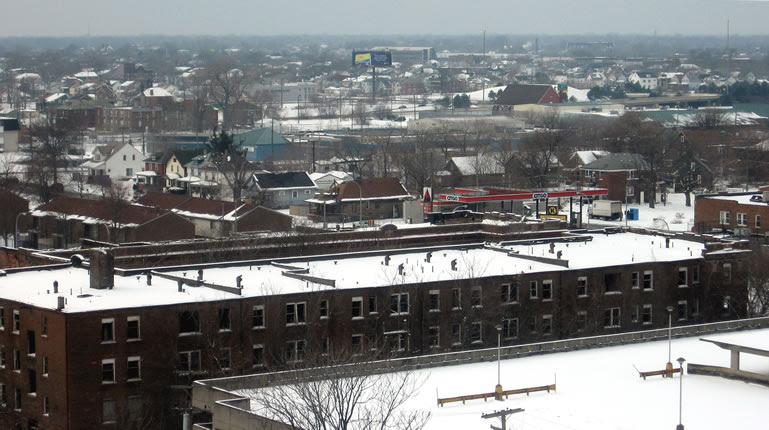 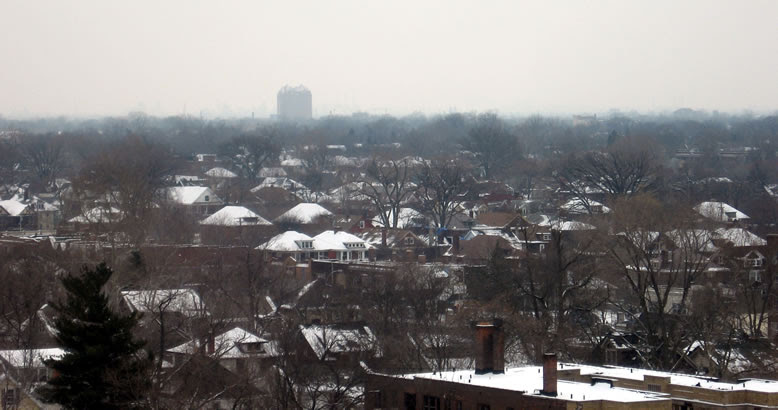 Michigan Central Station in the distance: 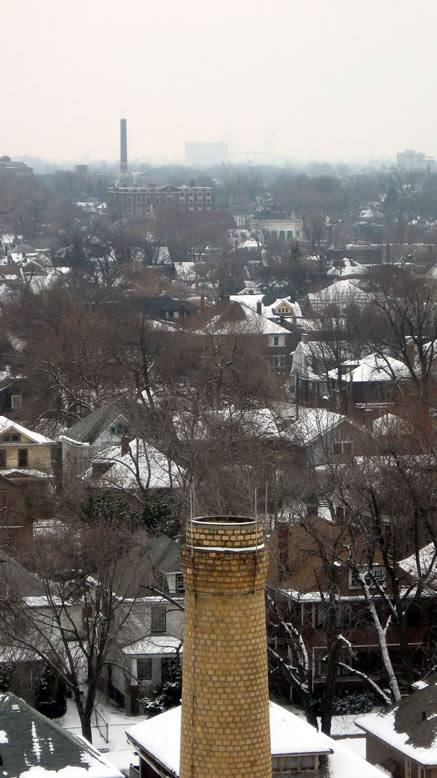 Looking northeast to the Ford Model-T Plant, and the Hotel Granwood: 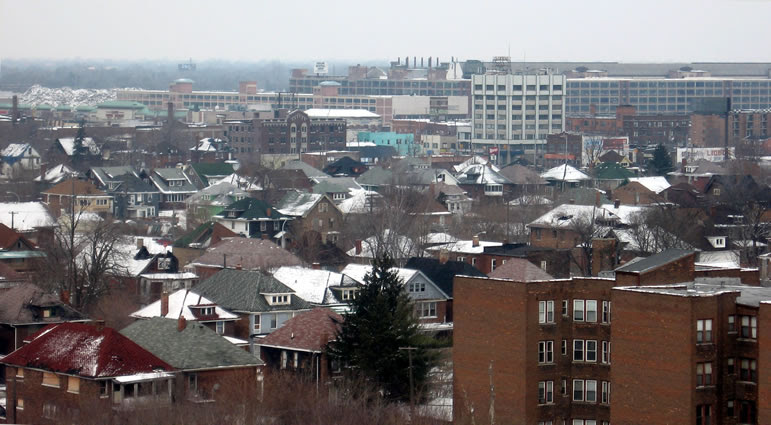 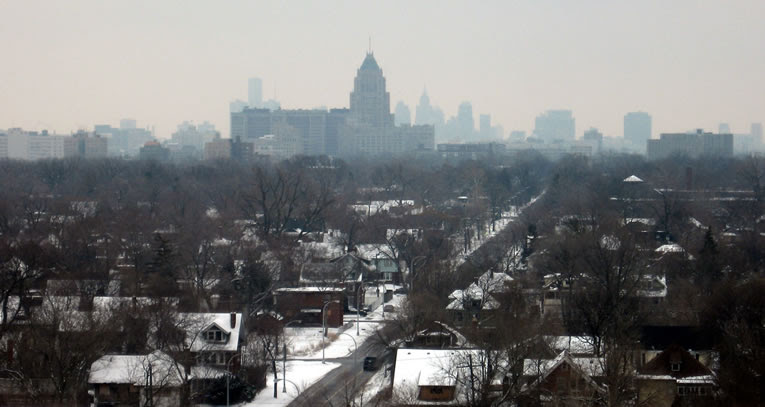 Highland Park High School, just before its plug was pulled: 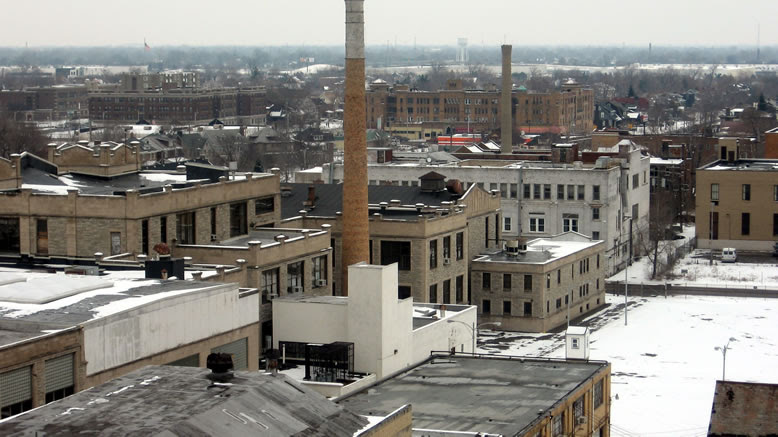 In the distance behind it can be seen the Highland Towers apartments. 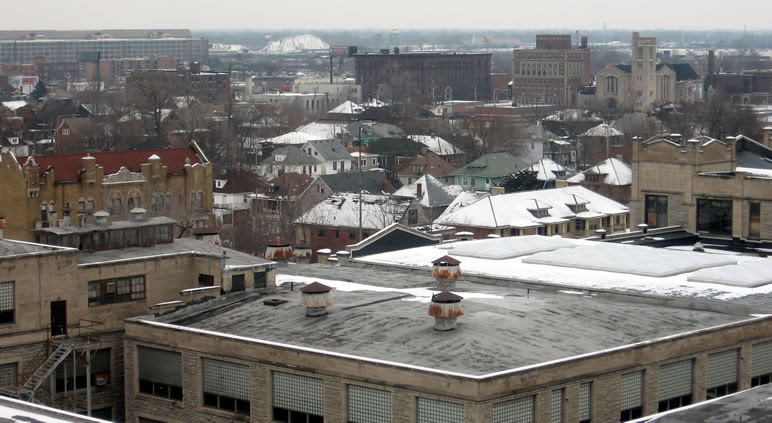 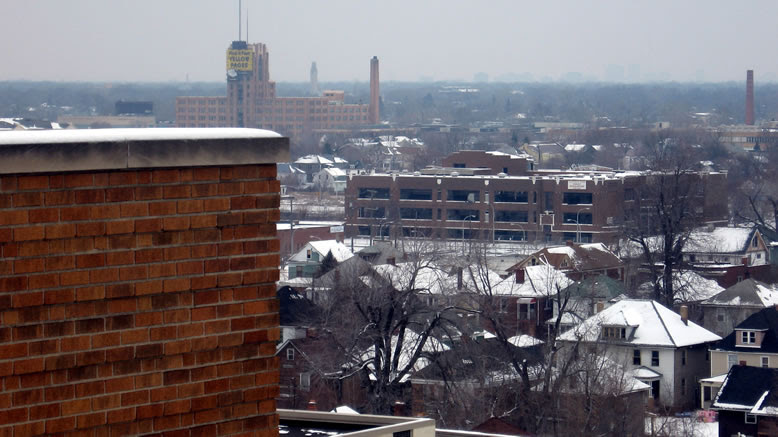 Down in the basement, we found that there was a steam tunnel passing underneath Highland Street to a small powerplant (whose smokestack is seen in the above photos) 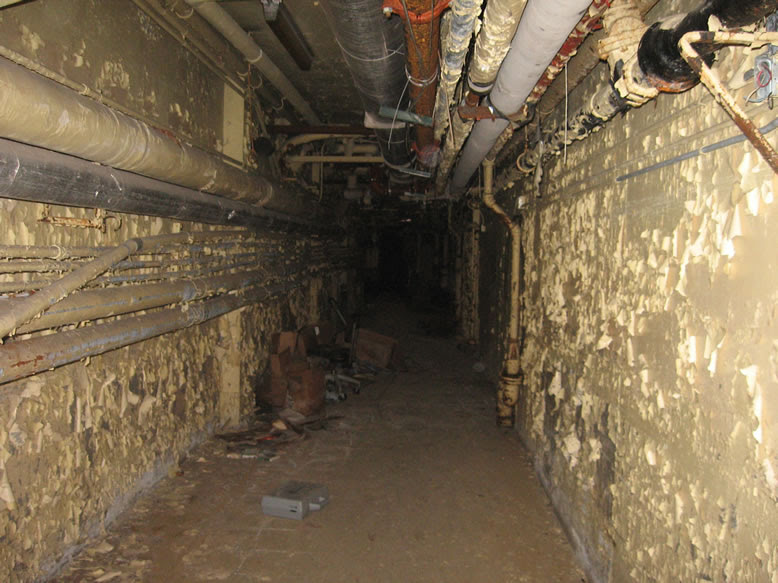 There was nothing really worthy of photographing left behind in the powerplant however. One nifty souvenir I did find in the hospital was this patch, which I think would've gone on a nurse's lab coat: 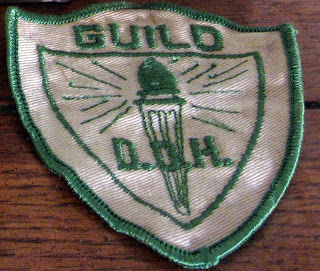 The letters "D.O.H." of course stand for Detroit Osteopathic Hospital.