Another of the more seldom accessed "skinny buildings" downtown was the ten-story Detroit Life Building, which was one of the rare examples of Mike Illitch ever actually doing anything with one of the abandoned buildings he owns besides demolish it. There were rumors for a long time that it would be renovated into the new headquarters for his Little Caesar's Pizza empire, but that seems to have gone little further than a new roof and a quick clean-out of the interior, because it has yet to reopen or see any further renovation work to my knowledge. 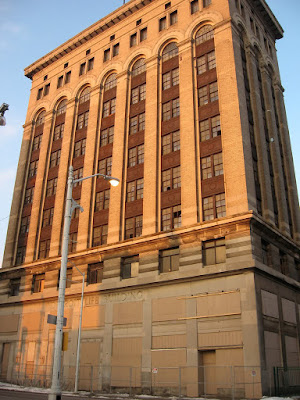 It was originally opened in 1923 by the Detroit Life Insurance Co., who occupied the top four floors, and the rest was other leased office space. The building was designed by architects E.B. Arnold & Ralph F. Shreve, who were based in the Humber Building in Highland Park. According to an ad in the 1925 Michiganensian, Anchor Fireproofing Co. (the contractor that did the interior tile fireproofing partitions of the new University Hospital, Literary Building, and Nurses' Home of University of Michigan in Ann Arbor) was headquartered in here as well.

The building went vacant in 1977. Illitch's original plans for it predictably involved tearing it down, but he was thwarted by the fact that it became part of the Park Avenue Historic District in 1997. Stupid history--always getting in the way of commerce, and dragging this country down! We should ban history! 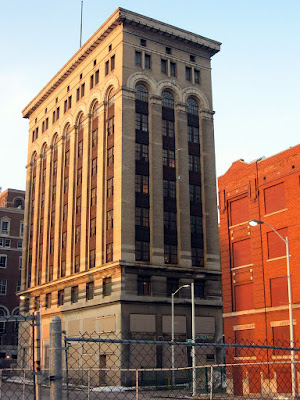 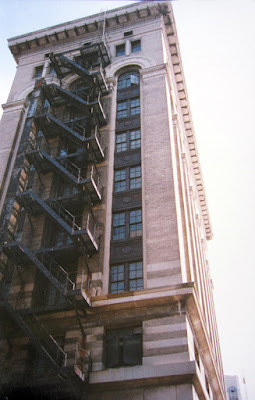 Although it looks awfully barren and ghostly today, in 1923 this stretch of Park Avenue was booming as an extension from prestigious Grand Circus Park, and according to the Detroit Historical Society, "Detroiters began to perceive it as their city’s version of New York City’s Fifth Avenue." Of course Lew Tuller was expanding his empire up that thoroughfare at the time with the construction of several new hotels designed by Louis Kamper, but as the Great Depression so often did, it put a damper on those grand visions. 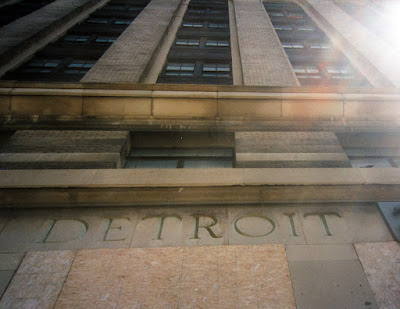 Once I-75's trench chopped everything north of here off from downtown, the area died. Downtown essentially became an island surrounded by a concrete moat, and everything both inside and outside it slowly fell into ruin. 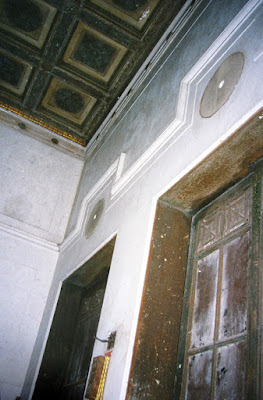 An ad in a June 1928 issue of the Free Press boasted that the Detroit Life company held $74 million of life insurance in force on its policyholders. Mr. M.E. O'Brien was president of the company, and had been since 1911. Another ad from 1925 indicated that the company was growing so rapidly that over $2.7 million worth of new policies had been written and placed in the single month of March that year. One of the ways in which the company originally attracted members was by arguing that the banks of the east coast had made themselves the financial center of the nation due to money invested by the midwestern states for a lack of home-based institutions, such as Detroit Life. "Why not keep a part of this vast amount at home?"

The Zimmer-Keller, Inc. advertising agency was also based in the building, as well as Showalter-Associates, Inc. The latter was a firm newly founded in 1928 by Capt. Floyd Showalter (a WWI fighter pilot) to serve as Detroit's latest contribution to the aeronautics industry by retaining airport consultants, planners, architects and engineers. They occupied suite 223, and its associates included Ralph F. Pinner, Raymond H. Wilcox, J. Ivan Dise, and John H. Schumann. Architect John Ivan Dise is probably best known for designing The Boulevard Temple at Rosa Parks & W. Grand Boulevard, as well as many fine homes in the area. 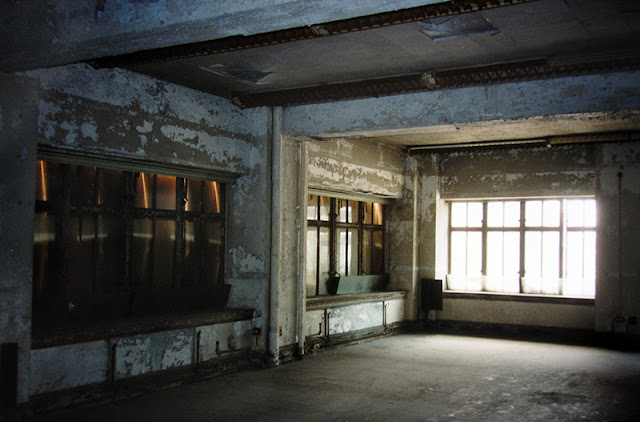 Detroit Life Insurance Co. was in federal receivership court in the mid to late 1930s however--no doubt due at least in part to the Great Depression--and was reorganized. Mr. Louis H. Charbonneau seems to have been its president at that time.

By the 1930s the well-known local women's fashion merchant Winkelman's was also based in this building, having just started their first store at 5832 W. Fort Street in 1928. This remained the location of Winkelman's company offices until they eventually relocated to the suburb of Livonia. Winkelman's had 41 stores across Michigan when they finally went out of business in 1998. 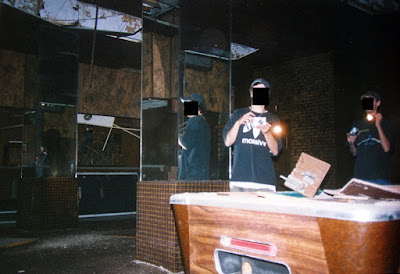 When we first accessed this building in July of 2004, it was in fairly sound shape, if a bit empty. The main floor however was home to a bar that had left us a pool table and old arcade machine to fiddle with...Asteroids DeLuxe, dood: 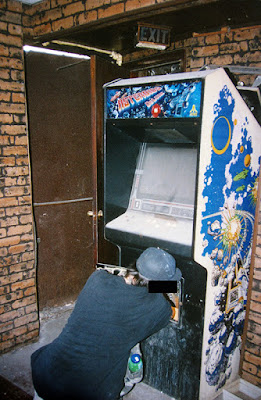 ...while this old Goebel's sign now hangs on my basement wall to this day: 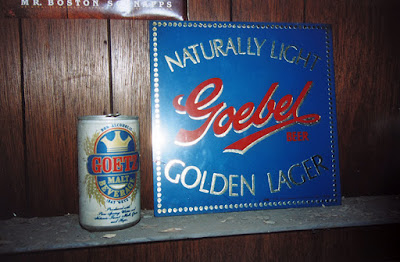 Goebel's was brewed by Stroh's once upon a time, if I'm not mistaken.

The lack of much to see on most of the rest of the floors meant we headed up toward the top floor pretty quickly. The elevator shafts in this tower had a neat spill of light coming through them thanks to the classic glass doors and windows on the backside of the structure as well: 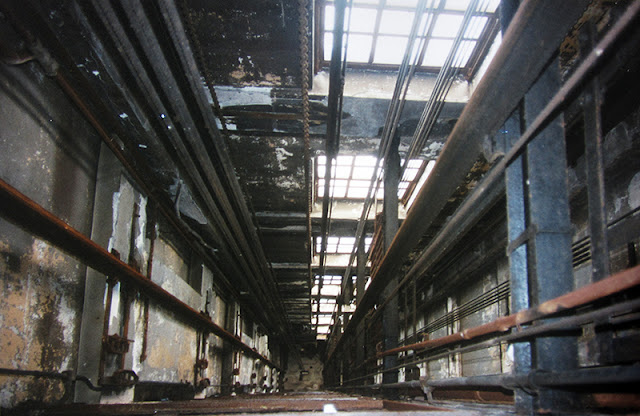 Office space within this building seems to have been on the market quite a bit after the 1940s. The 10-story tower was sold in 1950 to steel company executive Mervyn Gaskin, the same guy who bought the ailing Music Hall three years later and converted it for "Cinerama." Prior to that, the Detroit Life Building had been occupied by the Michigan Unemployment Compensation Commission. The Builder's and Trader's Exchange of Detroit was based in the building in the 1960s. 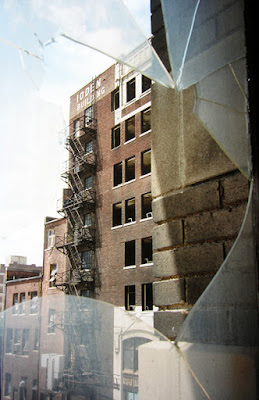 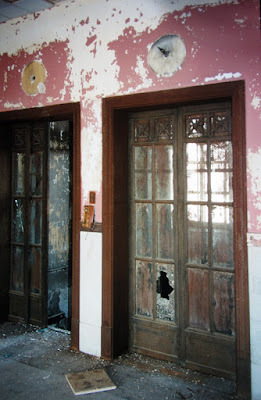 As it turned out--and as things so often go in this business--every other group in town at the time also recognized the same window of opportunity and made their way into this building within days of my own visit, including Wide Open and Detroitblog.

Usually these buildings have their own "hallmarks" or features that everyone seems to focus in on photographically. The Detroit Life Building was no exception, and had several cliche shots that everyone took, namely the stairway... 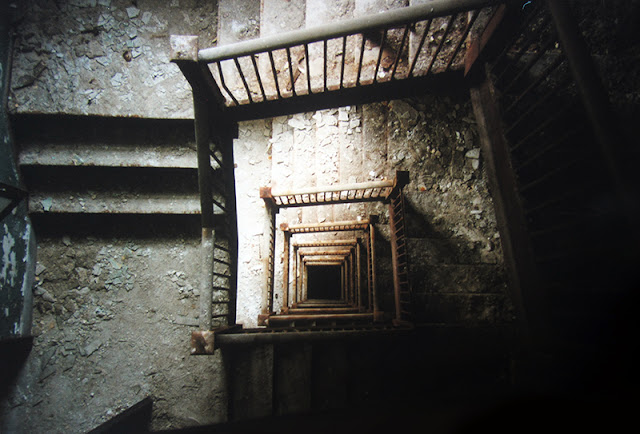 ...the room with the carpet of plants... 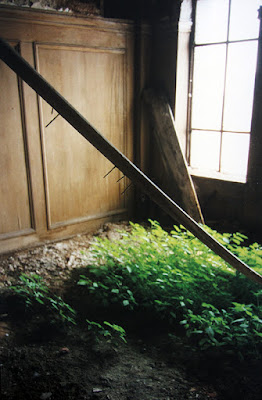 ...and the top floor with the arched windows, which was my personal favorite: 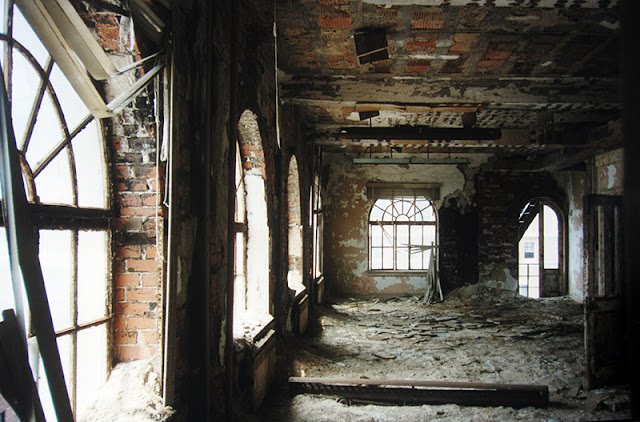 I don't know what it is about arches, but I have always loved them. Especially when there's a bunch of them in a row. Across the street could be seen the equally abandoned Iodent Building (right photo below)...you'll notice that Tiger Stadium is still standing in the distance: 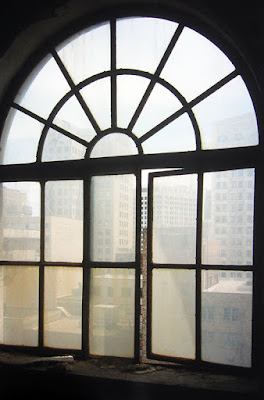 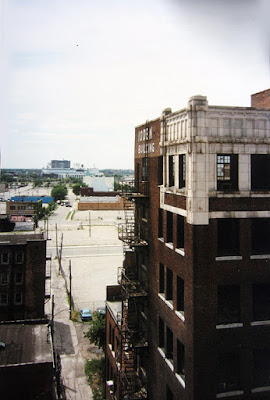 I never did make it into the Iodent Building before they renovated it, but Detroitblog John did. From what he told me, I didn't miss out on much. 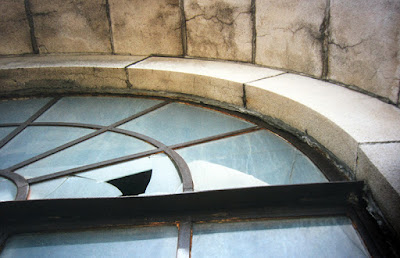 Though the top floor of this place was in melted shape, it was evident that the building was still structurally sound: 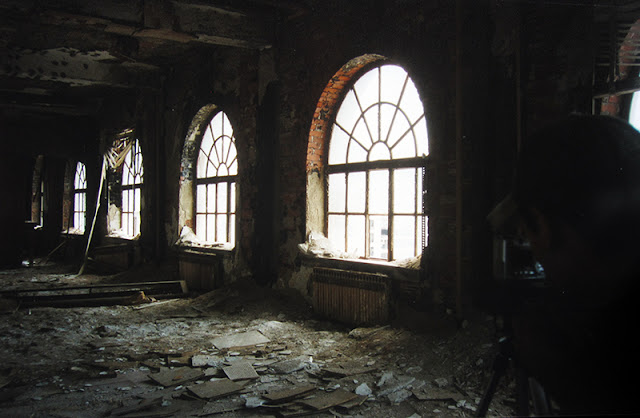 The big arch-windows-floor was the eye candy that I had come to see this building for, and I was very pleased to see that the whole floorplan was basically open, offering an unobstructed view of all of them. I would keep it that way if I were to renovate it.

There was also a very decent view up Park Avenue, and over to the State Theater. Unfortunately the old rusty window sashes could not be coaxed into opening much further than that, hence these odd photos: 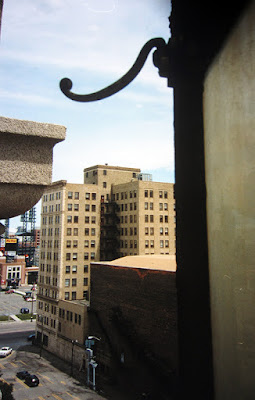 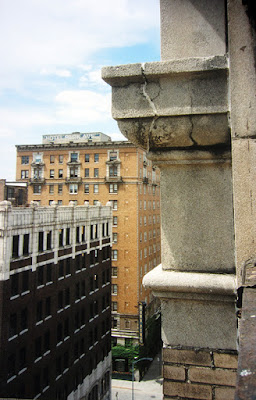 One other unique thing about this building was a very wide cornice overhang, much like that of Michigan Central Station. I hung myself over the edge to try and get a decent vertigo-shot looking down: 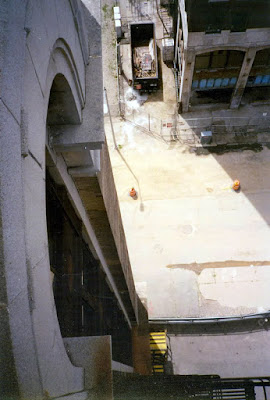 It was very awkward because I had to hook my arm not only outward, but also downward under the hanging cornice in order to get the building in the shot...something that can be a little nerve-wracking when you're floating 10 stories above the street on a crumbling masonry shelf that likely hasn't been properly maintained in about four decades. 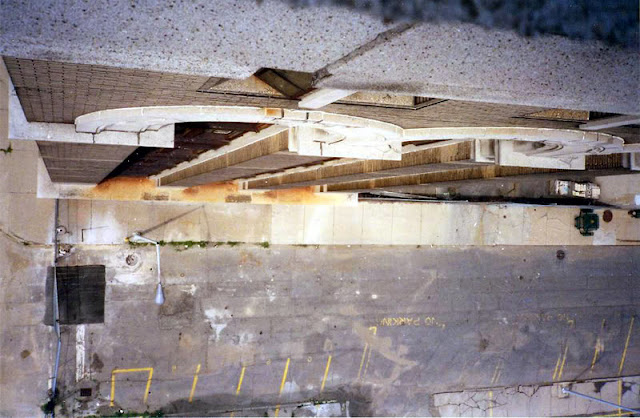 I kept waiting for the giant slab of terra cotta I was laying on to just let go of the structure and free-fall to the street below. 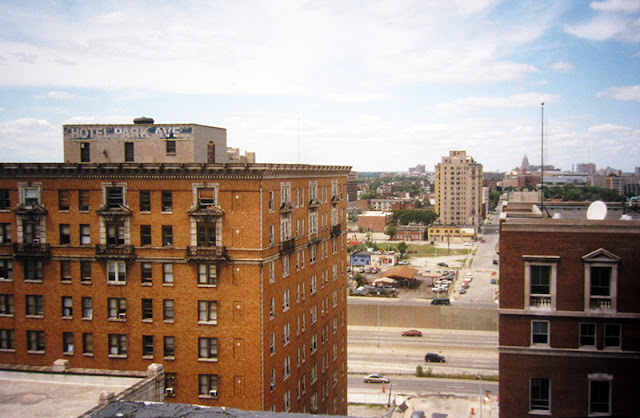 From the fire escape looking up, you can see just how far that cornice sticks out: 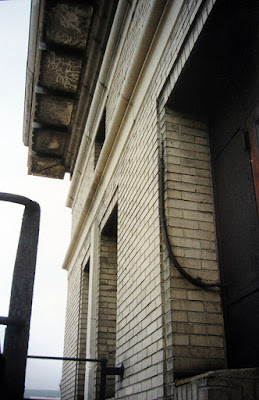 There were the usual roof trees as well... 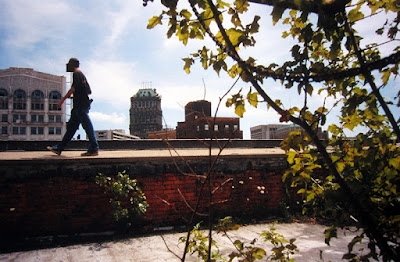 Looking over toward Comerica Park: 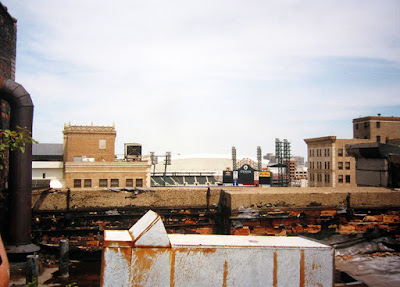 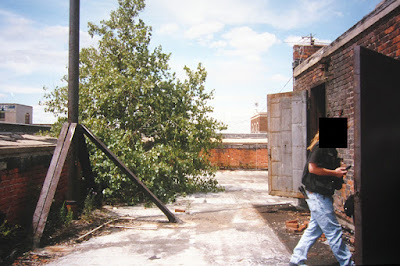 From the roof we noticed that to our surprise, there was a white Cadillac parked in front of the old Chin Tiki restaurant a few blocks away, and the door was open--maybe now was our chance to suave our way in for a peek at this abandoned curiosity. We walked over there to see what was up. 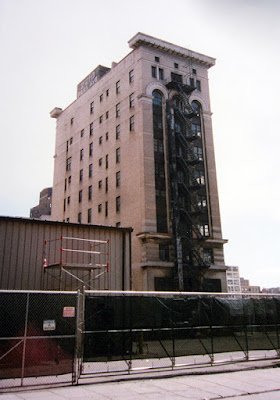