Death In the Long Grass 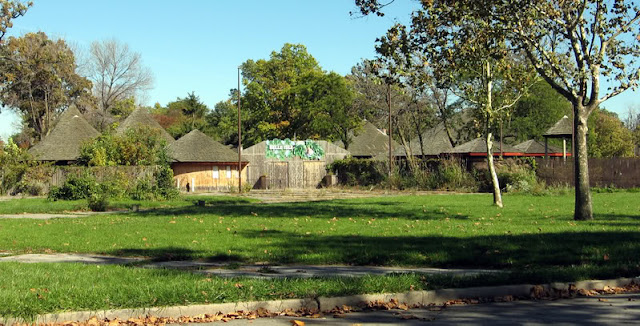 The Belle Isle Safari Zoo closed in 2002 (because of the usual BS). It lies in the middle of the island, surrounded by a swampy woods on one side and the street on the other. Now that Belle Isle has officially become a state park, we can probably expect this eyesore to be cleaned up or disposed of soon. 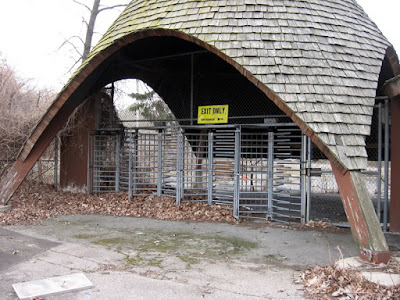 Some of my comrades had gotten in early in 2008, though I think they went through a massive hole in both the fences where a large tree had fallen and crushed them flat in a windstorm. When I came to pay my visit a few weeks later, the tree had been chainsawed up, and the outer fence was mended. I was bummed, but I knew I could climb the damn fences if I really wanted too, so I began a slow casual circle of the perimeter to look for easier spots in which to do so.

A small stream (much too wide to jump) ran through the zoo property, though the perimeter fences dipped down into the water to prevent either humans or animals from using that as a possible ingress (or egress) route. At least three such fences cordoned off this waterway, like submarine nets or something. As I continued around to the backside through the woods and swamp, I noticed that a couple huge wild turkeys meandered around–on both sides of the fence. It was weird...almost like the prisoners had taken over the prison.

I continued on and found what looked like a grave marker, obviously of some poor lost soul who sank into the Swamps of Sadness while trying to assail this place. It was just in the middle of some copse of trees and brush, not even close to anywhere that it might be seen by anyone. Bizarre. The only sound to be heard on this grey April day besides the wind was the forlorn groaning of passing freighters sounding their horns as they rounded the isle. 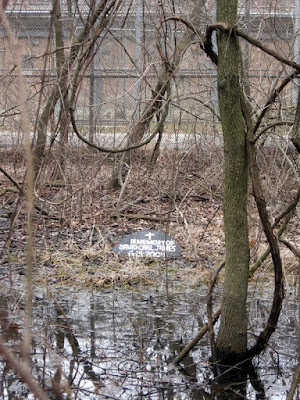 I found a couple potential places where the outer fence might be easy to hop, but again there was always the inner fence to contend with as well. Both were topped with barbwire. By the time I completed my circuit of the zoo, I came to a gate facing the street which had a huge enough gap in it for me to squeeze through, and beyond that another gate with a gap underneath big enough for me to slide under. With a quick look around, I forced myself through with a quickness, having not seen a soul about. On the other side of the inner gate I saw an old faded Detroit Police Harbor Master boat laid up in storage. Apparently extended storage... 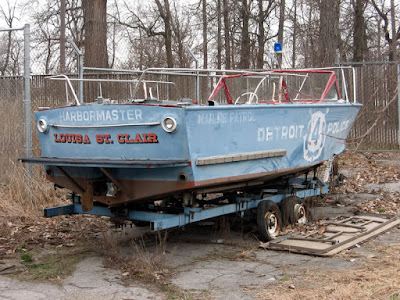 The boat was old enough looking to where it could've possibly been one of the ones used in Detroit 9000. 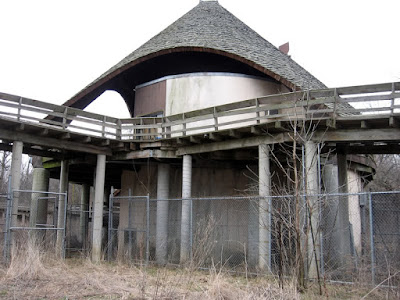 The way this place was set up with the huts reminded me of either the Ewok Village in Return of the Jedi, or Rivendell from Lord of the Rings. Of course there was a super-strong Jurassic Park vibe too. I poked inside a couple of the hut structures and found there to still be power on. Crawly had reported that on his expedition they found handling collars for "big cats" in one of the cages. 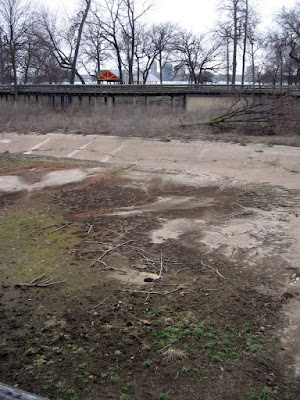 I explored through what seemed to be replica African Savanna terrain, which had been allowed to grow wild since I had last been here as a kid. The occasional tipped-over tree added an especially forlorn appearance to this moribund landscape. The winding elevated boardwalks snaked every-which-where, and below them were fenced passages, apparently for zookeepers to move safely between animal holding areas. Visitors would view animals from the boardwalks above. A couple of the larger holding areas had vast concrete basins that perhaps simulated watering holes on the African plains. 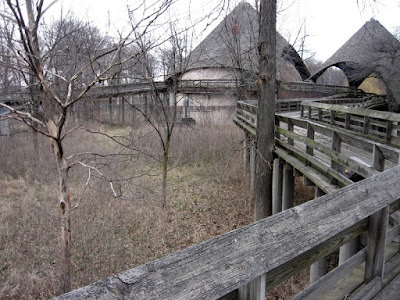 It started to rain. I kept getting an uneasy feeling like I wasn't alone...the sight of open cage doors everywhere and the overall feel to the day made for an uneasy ambience. I kept waiting to hear a deep, bloodcurdling growl from somewhere unseen, followed by the rustle of grasses, a flash of stripes or talons, and to be torn to ribbons by a Velociraptor. I was beginning to ask myself, "What would Peter Hathaway Capstick do?" 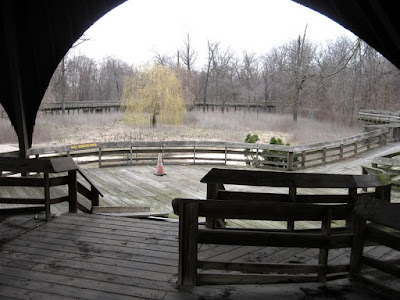 The dense (though leafless) foliage gave me a feeling of isolation and insulation, but on the elevated walks I was able to see to the street if I wanted to. And I was beginning to notice DPD cars circle the place, more than normal. 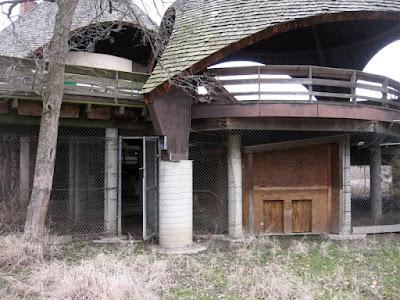 Maybe my mind was just playing tricks on me, but I could've sworn it was like they were looking for me. Belle Isle had its own precinct station (a mere 300 or so yards away), and on a weekday noontime in shitty weather, they certainly had little to do in the way of normal policing, and I'm sure they must have their own keys to the gates to this place, so I was increasingly nervous. By the time I saw two patrol cars prowling together on the backside of the perimeter, I was formulating an escape plan in earnest. 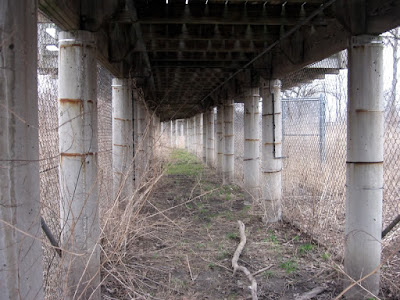 I had cover and camouflage on my side, but this place was difficult to navigate; not all of the fenced-in corridors under the boardwalks were unlocked, and not all the cages were either, meaning you could get in on one side but not necessarily out on the other. And going between the boardwalk and the ground meant climbing, because there were no stairways except in the domed huts. For awhile I was trapped in one of the big, open pens, and couldn't figure out a way to get back up on the elevated walkways. So I got frustrated and scaled the side of one. 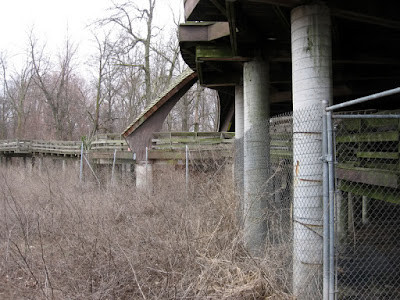 I obviously couldn't exit the zoo by the same way I came in, since the cops undoubtedly knew about that way in, and if they were indeed on to me, they would be watching it from afar, waiting for me to emerge so they could pounce. 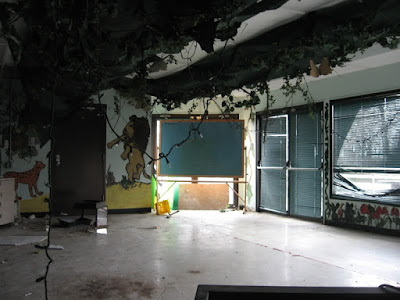 What it seemed like was they knew I was here but were not letting on...which is what was freaking me out. I would have to hop a fence on the back perimeter in the cover of the woods that I had scoped out earlier as a potential entrance. That way I could take my time and no one could see me. 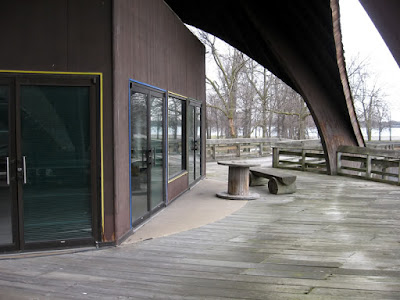 But what I had not realized was the fact that I was now on the wrong side of the river, meaning I would have to ford that mucky shit if I wanted to get to the safe side where that easy spot was. My only other option was to go to the very far end by where I parked, which, unfortunately offered the least cover from the road. I tried it, but the fence climb was too tough and would require tight-rope walking across the barbwire of the two fences before I could drop down on the other side. 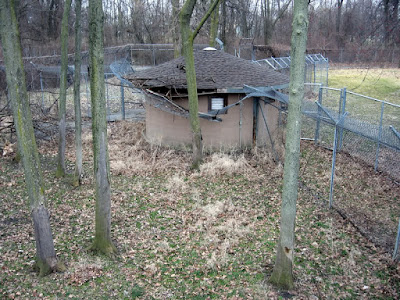 Somewhat exhausted from my cursory attempt (and having been totally spotted by a passing car–which luckily was not a cop), I retreated some and dropped down into a position of cover under one of the walkways that terminated at the river's edge. Here I came across a pile of old moose antlers, which I found...odd.... 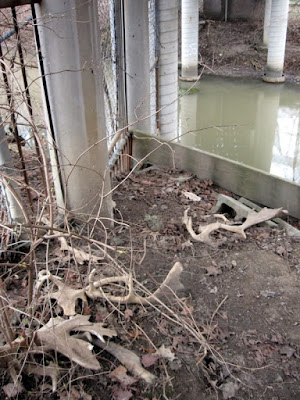 I resolved that perhaps my best option was to hop the fence here and do a crouched crawl along the muddy riverbank, down below grade where I could not be seen from any angle, then push my way underneath the fence that I had scoped before. There were a total of three such fences blocking the river like submarine harbor nets, the outermost of which had a shy spot blocked off by a railroad tie that had been wedged in place. I had made a mental note earlier that it could be moved easily enough, if need be. I was increasingly feeling like some kind of fugitive, though I still had no definitive proof that I was being hunted. 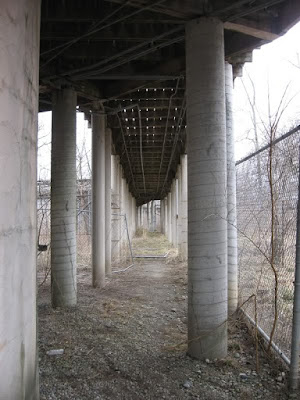 There were so many puns and references to old movies and such going through my head it was ridiculous. I even started humming Weird Al's "Jurassic Park" song to myself. 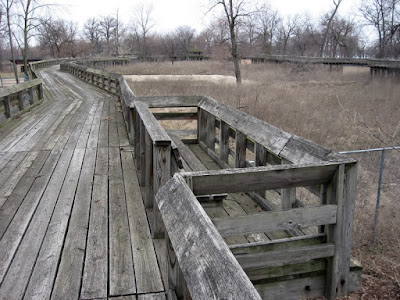 So I advanced downstream to the next fenced corridor, which dead-ended at the river, and painstakingly climbed the fence that separated it from the riverbank. Dropping down to the mucky, smelly, scummy bank, I was glad at least it was not muggy summertime or bug season yet. However I was still nearly soaked with a mixture of rain and sweat. I made slow headway in pushing my way through the brush at water's edge while in a low, squatted stance. Now I really felt like I was an escapee from some Viet Cong jungle prison.

It took about ten minutes of hard slow work to make it within sight of the last fence across the canal. I slunk up to it and began pulling the railroad tie back, and moved it aside. Hmm. The gap there was a little bit smaller than I had remembered. I tried gingerly a couple times to curl myself under there, and soon feared it was not gonna be pretty. I planned it out so that if I grabbed a certain little clump of grass on the other side, while gripping a knot of tree root on this side, I would be able to slink under with no problem. 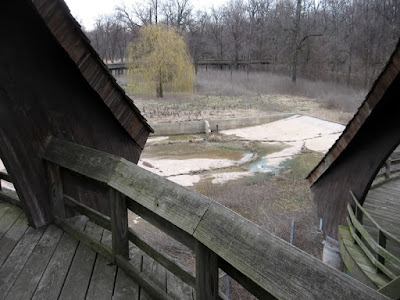 Instantly my plan went awry. The sharp, poky ends of the fencing grabbed my jacket and belt and held me like the closed jaws of a crocodile. I was fatigued already from the rigors of my adventure and present escape, and started to slide down into the mud. Swearing, I watched myself become more and more damned as I struggled to avoid going into the river or eating worm food face-first. As I tried more and more urgently to push myself through, I saw myself go deeper and deeper into the slime until it was a forgone conclusion that I was not getting out of this without a desperate, muddy struggle.

My whole right half was now thrust smartly down into the pasty shit, and I could feel the cold dampness soaked through past my long johns to bare skin. Swearing some more, I gave up trying to keep clean or stealthy and yanked myself the rest of the way through, clawing my way back up the river bank like a prehistoric amphibious beast leaving behind the primal sea to go on land and walk erect. 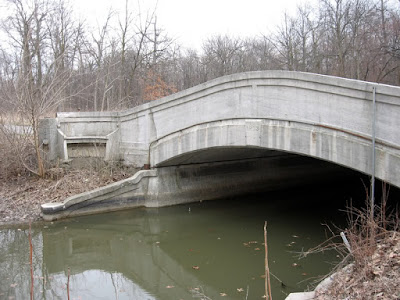 I sat down on the lumpy grass overlooking the stagnant grey river and took a rest while my exasperation cooled to resignation. I had perforated my pants, coat, and unmentionables; my boots and whole right side were liberally coated in slick, stinking mud, as were my hands. Of course I had just vacuumed out my car the day before...so much for that. As I drove away there was not a cop in sight. It began to rain harder.