Traverse City Asylum's first superintendent, Dr. James Decker Munson, was as much of a pioneer in the concept of "therapeutic landscape" as Dr. Thomas Kirkbride himself, asserts Heidi Johnson in her book Angels in the Architecture, and he lavished great care and expense on the grounds of the hospital, in the belief that "Beauty is therapy," as he put it.

And not only did the concept of therapeutic landscape remain attached to asylums, but Johnson argues that it also impacted the formation of the "City Beautiful" movement, and the building of aesthetically pleasing public parks and spaces such as those designed buy Frederick Law Olmstead (i.e., Belle Isle in Detroit, Central Park in Manhattan, etc.).

In other words, beautiful architecture and landscaping needn't only be reserved for those committed to mental institutions, but all the "harried souls" living in American cities could benefit from some respite from the overcrowded, polluted, industrializing cities of the late 1800s--hopefully reducing the number that would eventually need to be committed as a result of being unable to cope with the drudgery of dirty city life.

Superintendent Munson, a native of the Pontiac area, often brought back exotic species of trees from his various study trips abroad for planting at the asylum's grounds, which were eventually turned into an arboretum. One of the massive black willow trees that still stands today is the largest known such specimen in the entire state. The asylum's dairy farm was also renowned for its quality, and could lay claim to breeding a world champion milk-producing cow named Traverse Colantha Walker, between 1916 and 1932. 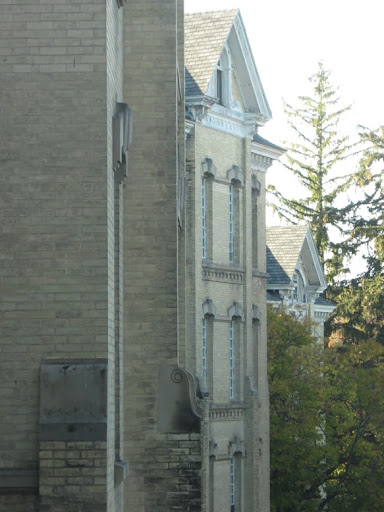 The asylum closed in 1989, having admitted and released some 50,000 patients by then. Of the first 492 of them admitted by 1886, the bulk came from Canada, England, Germany, Ireland, New York, Scandinavia, and other locations; only 56 of them were Michigan natives, which goes to show just how many of northern Michigan's residents in those days were recent immigrants come looking for work in the mines and lumber tracts of the north, or to farm.

In the book Traverse City State Hospital by Chris Miller, he says that the "asylum bed races" on Front Street have long been a part of Traverse City's National Cherry Festival, where pairs of employees would compete to see who could make the fastest institutional bed on wheels. This is vaguely reminiscent of the Outhouse Races in Trenary, in the Upper Peninsula...what it is with turning unlikely pieces of furniture into vehicles in this state, I'm not yet sure. 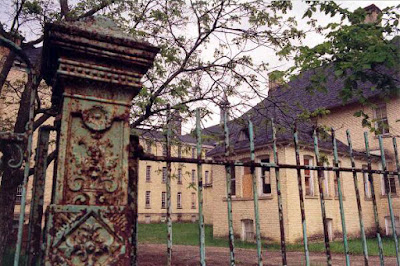 On my return trip (a week after my first one in June, 2004), it was another sunny day, and the construction workers were out and about again. A lot of progress had been made in that short week, and my entrance on Building 50 had been sealed. We had breakfast in the coffee shop again, which was doing brisk business. 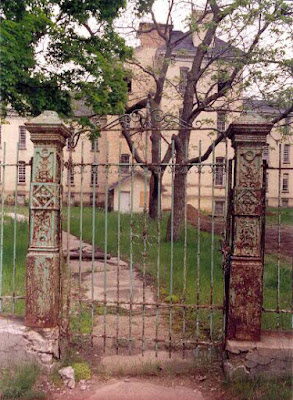 Our first target was Cottage 40, and we got in with no problem. Right off the bat, we found tunnel access. It was a round tube lined with the same yellow brick as the building was constructed of, but only about three feet high, so we had to crouch. Cold air blew in from the mouth of the shaft. We followed it for quite a ways, through several twists, turns, and downhill slopes until we decided it best to not get separated from the others. 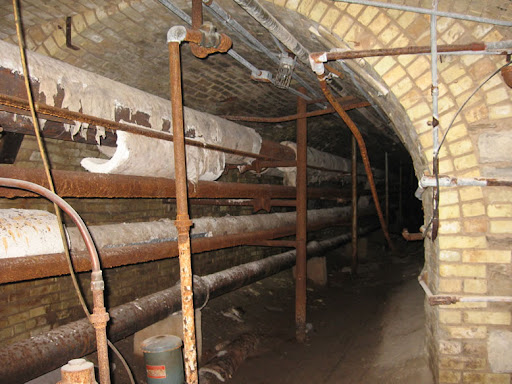 These are actually photos of one of the full-sized tunnels under Building 50 (the Kirkbride). 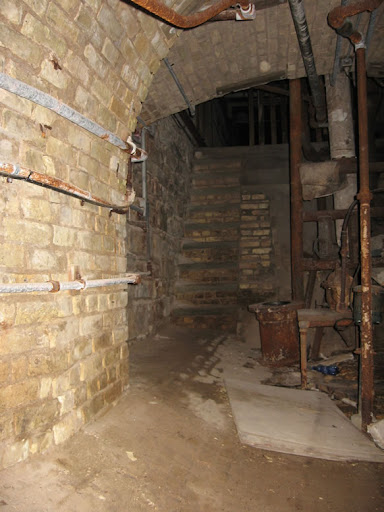 We used the tunnel to gain access to Cottage 34. In the attic we found something that I had not noticed on my first visit...under the pointed "witch-hat" roof of the round turret, a circle was formed on the floor by the burned-down stumps of 13 candles; apparently there are goth kids up north too.

We also realized that inside the buildings, there was almost no vandalism to be seen anywhere, contrary to common practice in the Metro-Detroit area. All tagging was done on seemingly designated bulletin boards and chalk boards, which were positively overloaded with the names and doodlings of those who had gone before. 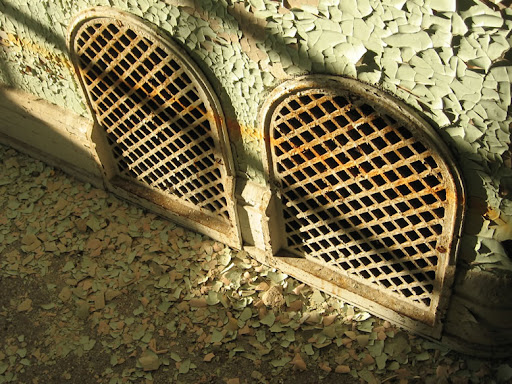 We emerged from Cottage 34's still-open window, and retired upon the trimmed lawn directly in front of it for a brief rest. Sitting in the shade of a tree, enjoying the cool breeze, we just couldn’t get over the fact that no one seemed to care about trespassers here...it seemed like a free-for-all for just about anyone to come and waltz in. 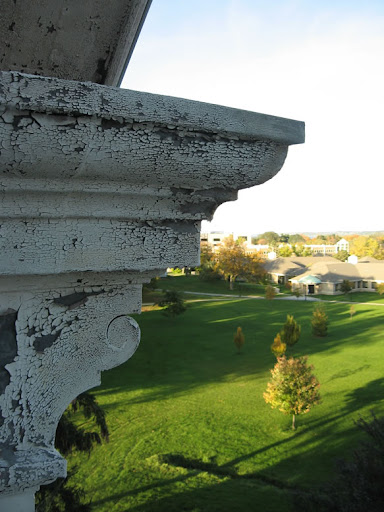 It was bizarre, almost unreal, but no one abused it...if this had been in Metro-Detroit, the place would be completely destroyed in weeks. Every window would be smashed, debris strewn about, holes knocked through walls, a few arsons would have been set, and spray paint would cover every reachable surface. 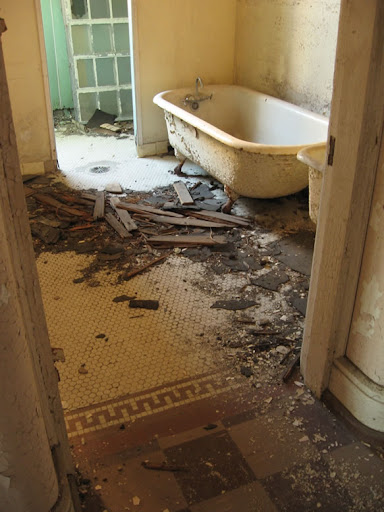 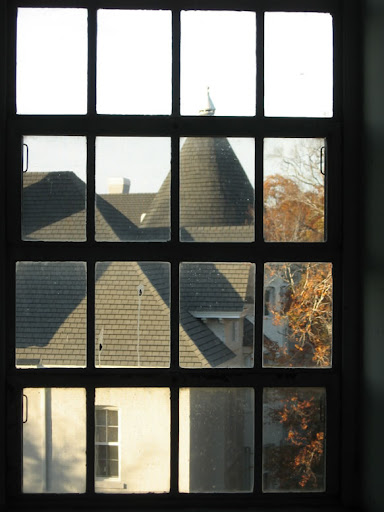 Yet here everything was treated with a strange reverence, it seemed. 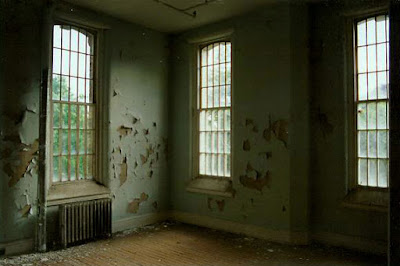 I have made at least four more trips to the asylum since that time. In total, I estimate I have visited it at least seven times since 2004, and witnessed all the changes going on there slowly taking shape. 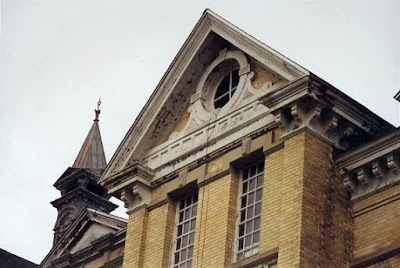 The condition of the buildings varied greatly; some areas were almost in mint condition while others were being sucked into the tenth level of Hell: 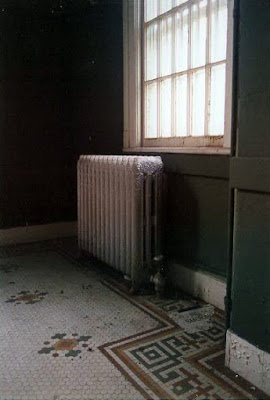 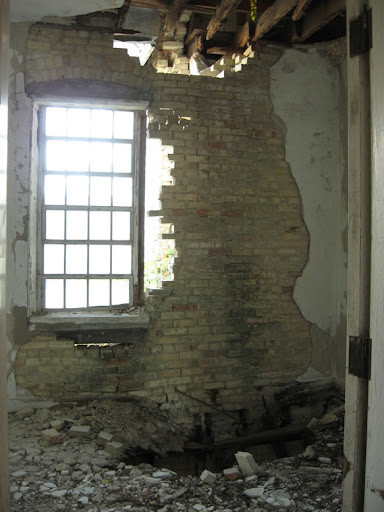 Down in the basement it was a labyrinth of brick support arches: 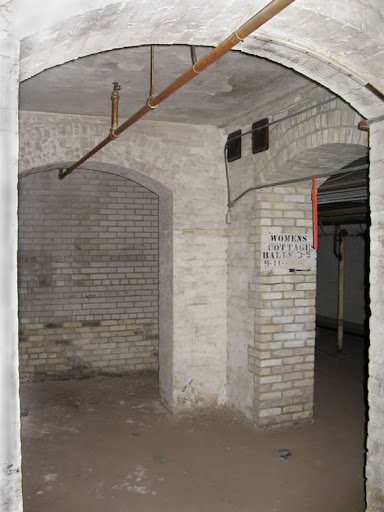 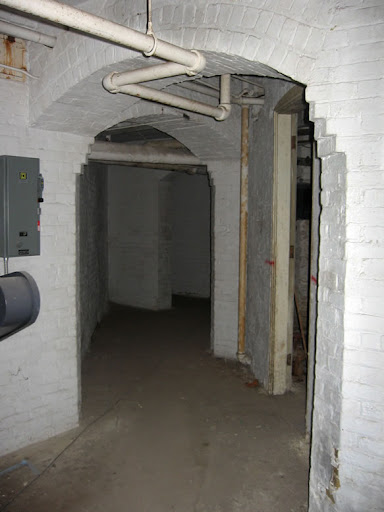 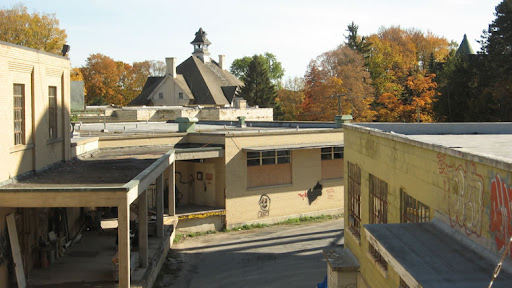 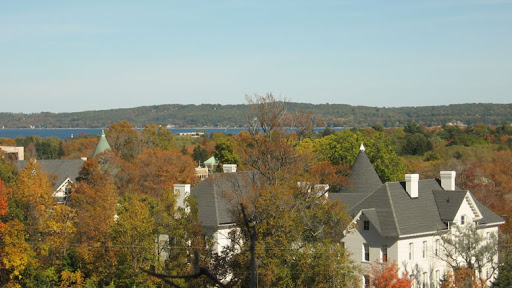 Some of the windows in the Kirk were still the old original wooden sashes: 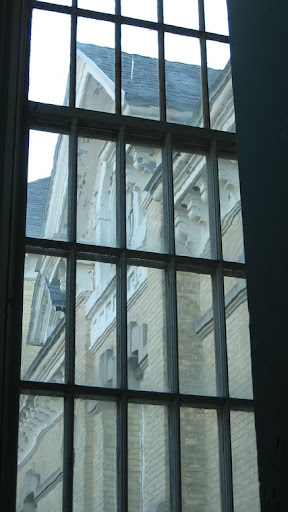 The door hardware and floor tile were equally well preserved in many places: 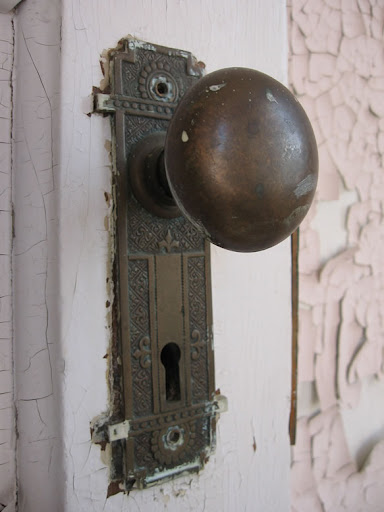 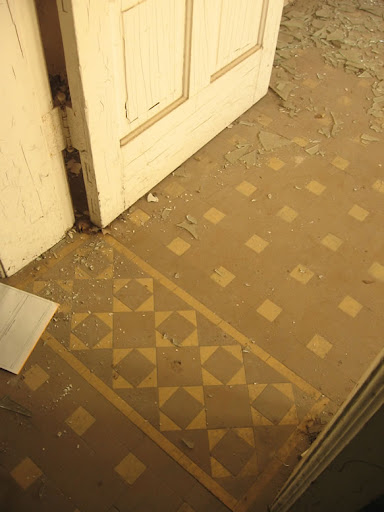 I made it up into the humungous attic, and wandered extensively through the winding corridors. 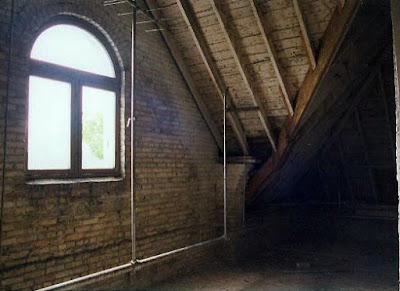 There I discovered a ladder that led up into one of the vent cupolas:

Of course I felt the need to go up there. I free-climbed precarious wooden beams up into the structure of the tall spire: 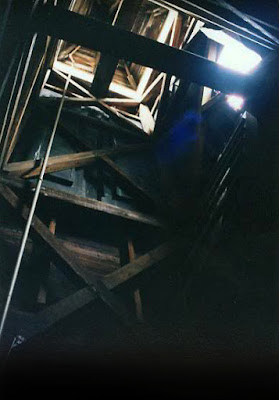 Halfway up, a broken panel in the side of it gave me a view out across the roof of the asylum:

I continued climbing, to eventually peer out over the grounds through the opening at the top...to gaze out over the town and to Grand Traverse Bay:

What made this somewhat harrowing is the fact that I was essentially standing on top of a vent shaft that extended from here all the way to the basement--approximately a seven-story drop, if I fell. The other thing that was a little unnerving was the presence of extremely large beehives in the corners of the cupola, but they all seemed to be abandoned. Which is good because I could see myself trying to hurriedly climb down while being stung by a cloud of angry bees, and it not going so well. 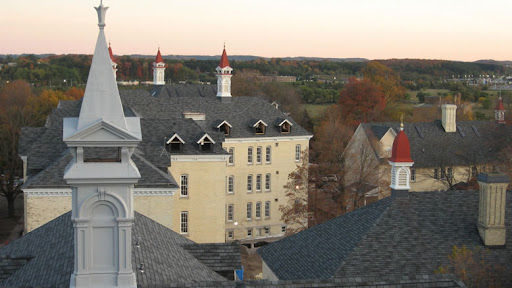 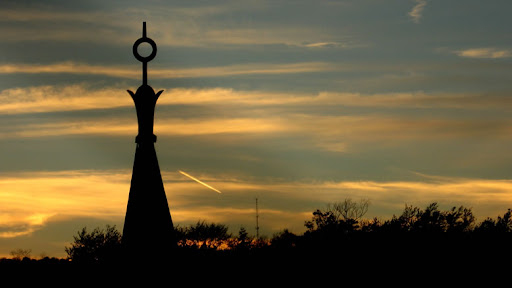 I decided to stay up in the spire to watch the moon rise, and while I couldn't get a decent picture of the big red face of the full moon climbing over the horizon, I enjoyed the experience supremely. It was a very reflective moment. I also realized that if I hung around even longer, it would afford me the opportunity to explore the asylum in the dark, which was something I had never done here before.

Now that the developers had opted to floodlight the outside of the building at night, it resulted in some very weird lighting inside the structure.

There isn't much out there on the to-do list that's more...flavorful, shall we say, than tiptoeing around a 120-year old asylum in the dark.

Back outside, the cream colored brick looked just as cool:

This is the end of Building 50's female wing, where the most violent patients were kept at one time:

The full moon now sat well up in the sky, casting its pale argent glow over the many architectural details of the sprawling old building. 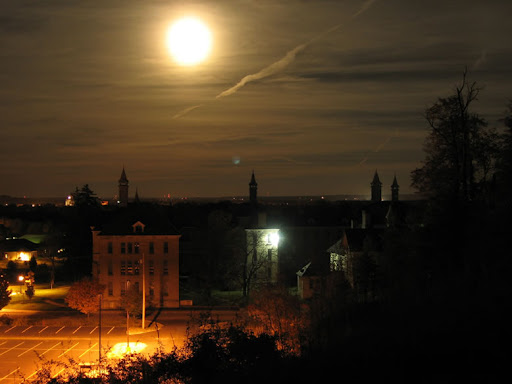 CLICK for the next episode, "The Traverse City Code."