The Silk Road Wound Through Michigan

Wow, the internet really is something, eh? Without leaving my chair I was able to learn about and quickly locate an abandoned silk mill in Ionia County in the small, quiet town of Belding. Once, however, this town was not so easily dismissable; it was the hub of a great American industry.

I remembered seeing the Belding silk industry mentioned in my copy of the c.1927 book, Michigan's Thirty-Seven Million Acres of Diamonds...

The Flat River cradled the mill town of Belding, and the industry it spawned there:

Seeing photos of a gothic clocktower lording over old redbrick mill buildings got my heart rate up. Hank and I saddled up the Buick and set out westward along I-96 through the driving rain. Three hours later we arrived in Belding, and the weather had abated into a gloriously sunny day. The sight of the various old brick mills along the Flat River running through town was just mouthwatering.

Finding a way through the fence was not hard. We crossed a former railroad trestle but had to sit and nonchalantly wait while some yokuls fished old scrap metal out of the river bottom (one guy was in waders). They were pulling up old railroad spike plates...2010 was desperate times, and scrap iron was still worth something.

Anyway it took them almost an hour to bugger off so we could make our way in.

Being totally boarded-up made it mostly dark inside.

According to the website of the Alvah N. Belding Public Library (which is where we parked),

Among the permanent industries of the United States were the silk manufacturing plants of the Belding Brothers & Company. They had mills located in four states and Canada - Rockville, Ct, Northampton, MA, Belding, MI, Montreal, Canada, and Petaluma, CA. All these mills ranked with the very best from the point of view of modern factory construction, mechanical equipment and liberal management.

What makes a record of the Belding Company’s enterprise particularly interesting is the humble way in which it was started. The foundation of it was laid in 1860 when Hiram H. Belding and Alvah N. Belding started from their home in Belding, Michigan (the western homestead of the family after leaving the east in 1858) selling silk from house to house. This silk was purchased for them by their brother, Milo M. Belding, who was then residing at their common birth-place, Ashfield, MA. This enterprise soon assumed the form of a large business and in a year after starting, the Belding brothers had extended the scope of their trade until it required the services of several teams, and embraced the largest part of the jobbing trade in sections in which they were operating.


In 1866 the Belding Brothers began manufacturing silk thread in Rockville, CT. In 1872 the increased demand for their products compelled them to build an additional mill in Northampton, MA, where they manufactured various broad goods and embroidery silks of every description. The brothers found expansion necessary and established themselves in Belding, Michigan in 1890. The Belding location was their largest single enterprise, operating four mills. Mill No. 1 was for silk thread exclusively, Mills No. 2 and 3 for fabrics and Mill No. 4 for manufacture of sewing and embroidery silks of every description as well as a variety of crochet cotton.

We found the base of the smokestack to be resting on boulders:

The interiors reflect the hodge-podge add-on way in which this mill was built up over the decades--like any good mill! Lots of variety.

According to Dunbar's Michigan, A History of the Wolverine State, Belding Bros. & Co. employed 1,200 people by the year 1909--one quarter of the town's population. In fact the town was renamed Belding in 1871, in honor of the Belding family (it had previously been named Patterson's Mill). After wandering through the dark for some time we found the staircase to the clocktower.

Seemed like a very long climb...we hit landing after landing, and the stairs got narrower & narrower... As we neared the top, we found a darkened level with a small room in it, which housed--

Made in Detroit, even:

At long last the uppermost floor was reached, which contained the clock faces:

As the Belding Library's webpage explains, in the true paternalistic style of an old-school company town, the Belding Bros. Co. built housing for its workers.


The conditions at Belding, Michigan, were such that it became necessary to employ large number of young women who were not residents of the town and in view of obtaining the most intelligent and desirable class, which the nature of their business required, the Belding Brothers & Company built and maintained three high-class boarding houses, “The Ashfield,” “The Belrockton” and “The White Swan,” with ample accommodation for one hundred and twenty-five persons each.

The dormitories were all handsome pieces of architecture and were fitted with all the modern conveniences of their day. Steam heat, hot and cold water, baths, electric lights, free libraries, and comfortably furnished in order to afford the young women employed by Belding Brothers & Co. as good a home as could be found only among the more prosperous citizens of the country. Maintenance of these buildings was not philanthropy, but a business proposition. The Belding Brothers experience had taught that highly intelligent, contented, well-paid employees would produce goods of superior quality and would inspire the success of the establishment. The dormitories were presided over by a matron and governed by rules and regulations similar to those of college dormitories of previous years.

Today, all of the old dormitories have been torn down except the Belrockton, which acts as the Community Center, and houses the Belding Museum.

Notice the lightbulb sockets for illuminating the clock face:

Here was the gearbox that drove all four clock faces in synchronization:

Again, as with any company town, all the other amenities were provided for as well. After all, why would you want to live anywhere else? Heh.


Belding Brothers & Co. had also a well-established corporation hospital at Belding for the convenience and welfare of their employees and their families. The charges were very modest, the equipment modern, and staff well-trained.

Dunbar says that company operations to moved out of Belding due to a more attractive offer from a company based in Putnam, Connecticut in 1925 to relocate there. The new Heminway management of the company was attracted by this and moved out of Michigan. "Adjusting to the loss of its biggest employer was painful but Belding survived, as did the Belding name, which continued to appear on the spools of thread used by dressmakers across the country."

According to the HAER, the Mill #2 was used exclusively for the manufacture of silk cloth until it was closed and dismantled from 1935-36.

There was yet one more level above us--the belfry.

The bell however, was absent. 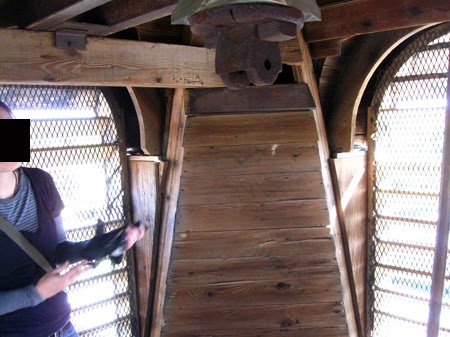 The striker at least was still here:

We were the equivalent of about seven stories above the ground...the view was excellent.

Across the courtyard, we could see another shorter tower...it looked like a watertower whose roof had been chopped off:

Also in the distance to the upper right, is the Alvah N. Belding Memorial Library, who have provided this quick run-down of the four mills:

· Mill #2 (aka White Mill) was built in 1901, a clock tower was erected there in 1903. This building is also standing. It is located directly west of the Alvah N. Belding Memorial Library.
· Mill #3 (aka Electric Mill) ws built in 1909.
· Mill #4 (aka as Richardson Mill) was built in 1886) – It was built and immediately sold as the Richardson Silk Mill because the Belding Brothers did not want their name associated with it until they were certain it would be successful. It was reacquired in 1907 - This building is still standing. It was converted to Richardson Silk Mill Apartments 1986.

We spent about an hour here in the clocktower, just reveling in the coolness.

Our descent back into the completely darkened regular levels of the mill came eventually, but mostly so that we could make our way to the next point of interest--the watertower.

The stairway to reach it was much the same as the clocktower's stairway.

The climb was shorter, but the view was just as good. And we had roof access. 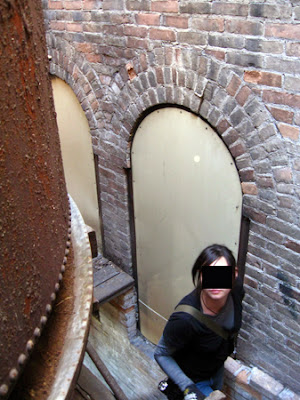 In the far distance beyond the clocktower I could see the Richardson Mill, which had been converted to apartments in the 1980s:

After this we went down again for a well-deserved more thorough inspection of the rest of the mill below us.

What a nifty old cupola.

There were now some huge well-lit sections with a production line partially intact as well.

Belding also played a part in the important refrigeration industry in Michigan...

Here is an excerpt of an article from MLive, describing the uses the plant went through after it ceased silk operations in the 1930s:


In 1890, Alvah Belding and his brother, Hiram, established Belding Brothers & Co., which became a national leader in the production of hand-sewing silks for embroidering, crocheting and darning. The firm later manufactured sewing thread, fabrics and satins, employing 500 to 750 people at its peak before closing in 1932.

The mills were purchased by Greenville-based Gibson Refrigerator Co., which converted them into a plant for central and room air conditioners.

Gibson Refrigerator's roots date to 1877, when cabinet makers produced wooden ice boxes at Belding-Hall Co. in Belding. Belding-Hall was purchased in 1908 by Frank Gibson, and the ice-box production was moved to Greenville. Gibson Refrigerator was bought by Hupp Corp. in 1956 and sold in 1967 to White Consolidated Industries Inc. In 1986, Sweden-based Electrolux AB bought White Consolidated, which later became White-Westinghouse.

The Belding air-conditioner plant was operating as Belding Products when it closed in February 1988, with White-Westinghouse moving the operations to Edison, N.J. The factory had employed nearly 450 workers.

The assembly lines you see here today are leftover from that phase of the mill's history, where it made air conditioners. I originally hypothesized the genesis of a world-class silk industry in Belding to be a direct effect of being located so near to the world-class furniture industry in Grand Rapids, Zeeland, and Holland, Michigan.

Regardless, I truly am descended from a once-great and revered state. European nobility were known to patronize the works of the Dutch-blooded furniture makers on Michigan's western coast.

A more modern addition to the plant:

I found the main power room, with all the massive disconnects and breakers for commercial power entering the mill. I noticed there was no powerplant in the complex--remember, this mill was literally a mill originally and used water power. The next building to be built after this one, Mill #3, was the first one built for electric power.

Just outside this room in a small courtyard was a collection of monstrous old transformers.

Heading back inside, the sun was starting to settle into the west and cast those golden rays of pure artsy-fartsiness into the mill, better known as "The Magic Hour."

Time to run around and kick up some dust off the floor, then hurry up and get a picture!

I also noticed that some of the bricks strewn about were stamped with the name of the company/town on them:

I was not smart enough to steal one.

The main courtyard was where I wanted to be during the sunset, to catch the awesome glow of red brick in the dusk, so that's where we wrapped up:

All told, we spent several hours in the mill. We finally adjourned ourselves at dusk to the nearest pub for some beers and chow.

References:
Michigan's Thirty-Seven Million Acres of Diamonds, by Clyde L. Newnom
http://www.mlive.com/grpress/business/index.ssf/2008/09/clock_running_out_for_repairs.html
Lower Peninsula of Michigan, An Inventory of Historic Engineering and Industrial Sites, HAER, 1976
Michigan, A History of the Wolverine State, by Dunbar & May
http://www.belding.michlibrary.org/about-us/anbl-history/belding-brothers-company-silk-manufacturers.html