Off Millionaire Street, on the south side of Calumet (technically the village of Osceola), stands the tall rockhouse of the Osceola #13 Mine. From the highway one can see its massive headframe towering above the simple peaked roofs of the little hamlet. 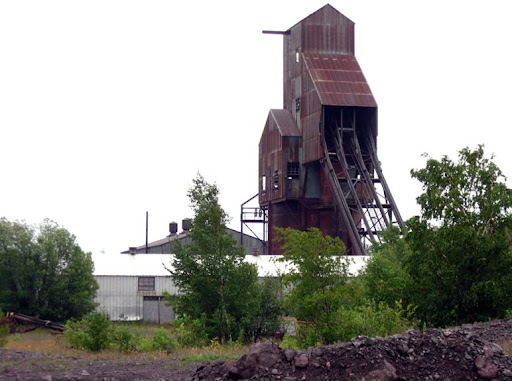 As I reached its foot I could see by the old hoist implementia scattered about on the ground, and I remembered seeing pictures of this gear on CopperCountryExplorer, especially the large hoist drum. 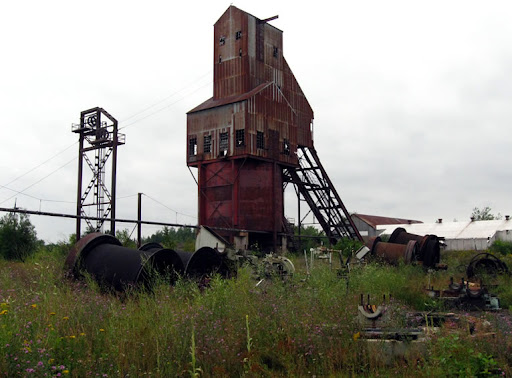 
The Osceola Mining Co. was organized in 1873 and worked the Calumet Conglomerate. In 1877, the Osceola Amygdaloid was discovered. In 1879, it merged with the Opechee Mining Co. to form the Osceola Consolidated Mining Co. In 1897, the company opened up the Kearsarge Lode by starting the North and South Kearsarge Mines. In 1909, Calumet & Hecla took control of Osceola and later merged it with its operations in 1923.

Larry Molloy's Guide to Michigan's Historic Keweenaw Copper District says that the #13 shaft was worked by Calumet & Hecla until 1931. In the 1950s, C&H de-watered the lode by turning the Tamarack Mine's #5 shaft into a pump, so they could reopen the Osceola #13, which they worked until the 1968 labor strike, at which time all C&H operations were closed for good. 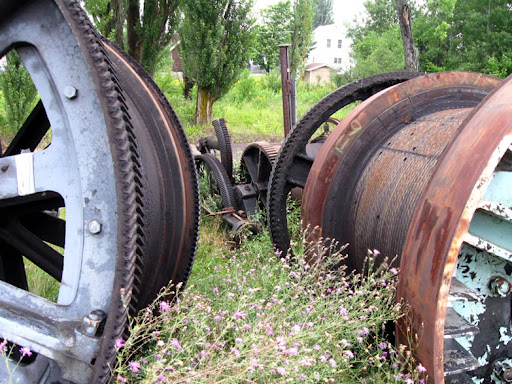 This was a pretty intact location compared to the typical copper mining site in Michigan, by virtue of the fact that it had been in service into the 1960s (making it one of the last operating shafts in the Keweenaw). Once again, note that the angle of the tramway leading from the headframe down into the shaft house mirrors the angle at which the mineshaft is struck. So, about 45 degrees; similar to most other shafts in the Copper Country. Looking around I could see these buildings were all pretty well sealed up, and in fact stood in the backyard of what was now a garage of some kind. 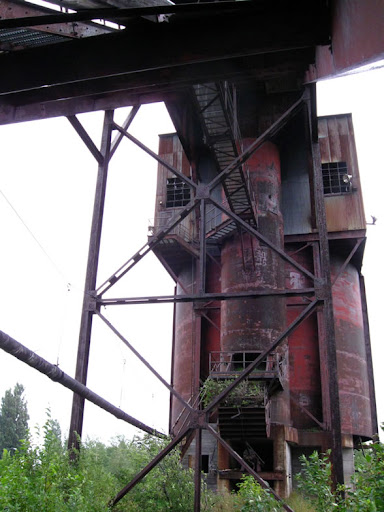 I noticed that one could get up on some of the catwalks if so inclined, and I pondered doing this, though the proximity of all the houses somewhat dissuaded me. Finally I realized that if I climbed up on the tramway and activated my natural cloaking device, I would be essentially invisible to anyone. 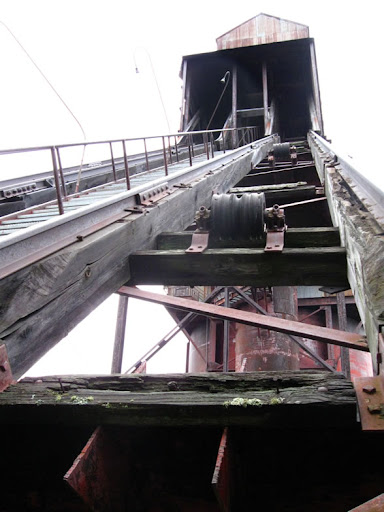 I did this, and painstakingly crawled up the stairs to the first catwalk: 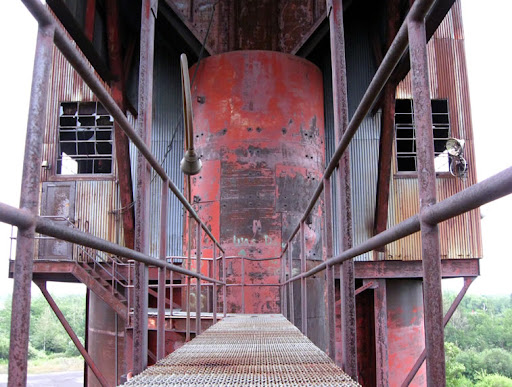 I went out on it and tried the door into the headframe but it was jammed shut. In the cold, wet, gusting wind, I rushed back to the blind spot in the tramway, and contemplated crawling up the scary ladder that would suspend me over the ~70-foot drop below. Yeah, it was a little creepy. But it was a sure way straight into the headframe. I swallowed the fear and went for it, crawling the tiny ladder as the wind whipped me with cold rain, hoping no one had dialed the sheriff yet. Here you can see where the stairs end and the tiny ladder takes over: 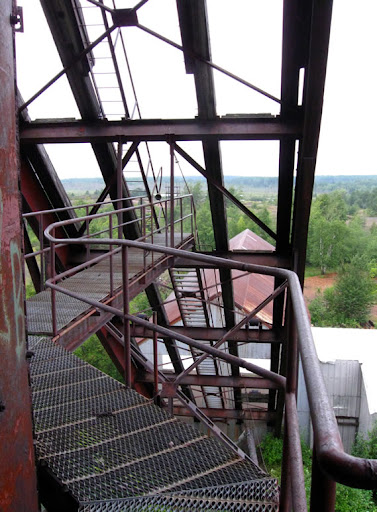 Looking back down toward the shafthouse: 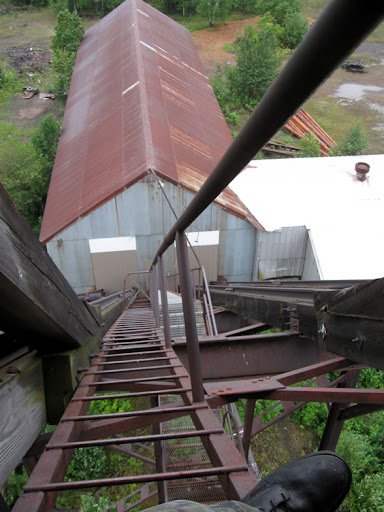 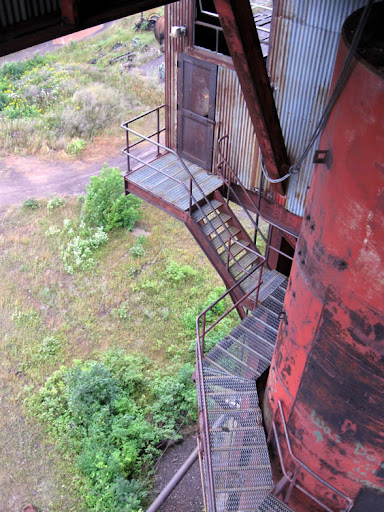 The ladder ended on a wooden platform near the rock chutes that dropped straight down to the hoppers below where ore was loaded in train cars. This structure was about the equivalent of a 10 or 12 story building.

What you're looking at is the guts of the mine's rockhouse; this structure's purpose was simply to crush and sort the material brought up from below into two piles: poor rock, and copper ore. In other words, waste, and product. 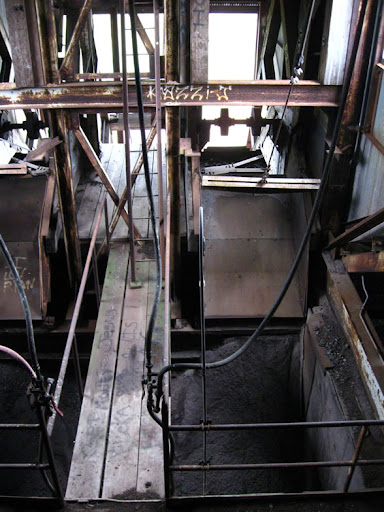 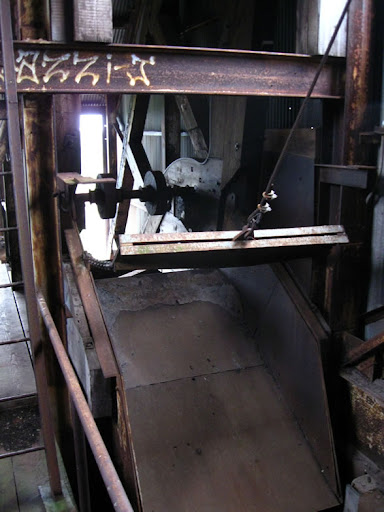 When the skips come up the tramway full of freshly blasted rock from the mine, they get dumped into bins here and crushed into manageable pieces by a 40-ton steam hammer, before being separated into their respective chutes—the poor rock gets dumped on the tailings pile, while the ore is funneled into a hopper that dispenses it to railcars waiting below. The ore then travels to the stamp mill, and finally the smelter, before it becomes real copper. For a more detailed anatomy, see Mike Forgrave's excellent diagrams.

As soon as I was inside, the rain started a full downpour again; now I was glad I had made the choice to go in. I dug the maze of odd apparatus in here for quite awhile, marveling that no one except local punks had probably ever really done this. Soon I saw the way up to the top where the massive pulleys were: 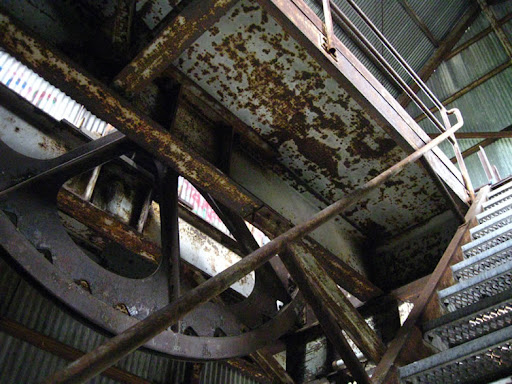 These wheels (called "sheaves") are about 14 feet in diameter: 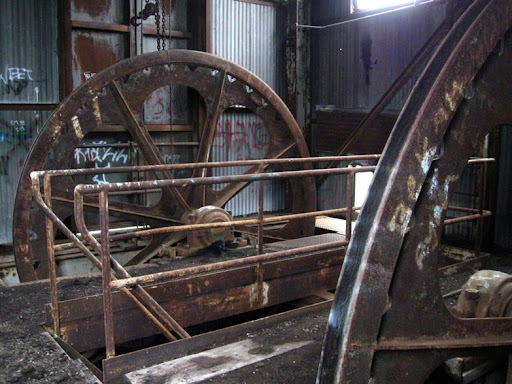 Their purpose is to guide the tram cables from the engine house where the hoists are, all the way down the mine shaft where it lifts the trams in and out to remove ore from the mine: 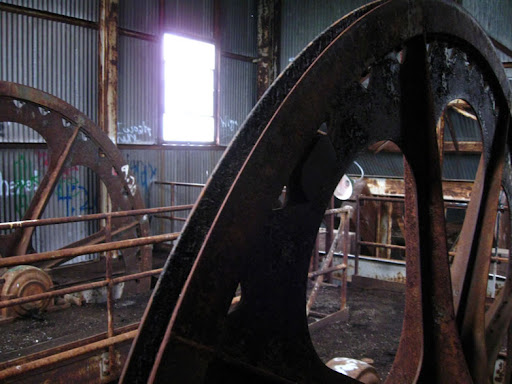 When the rain paused, I had a dizzying view from the top...below is the engine house, with my car nearby: 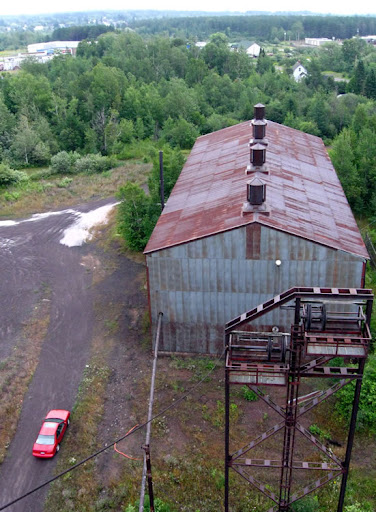 A few levels down, some chutes—on what I believe is the rock crusher: 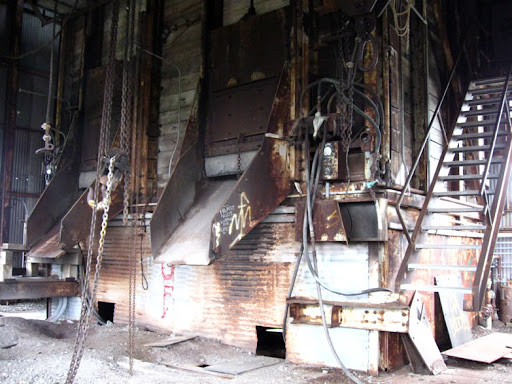 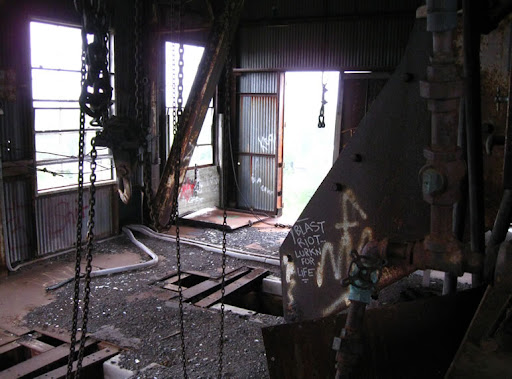 View out the window, with the pulley stand superimposed on top of the engine house: 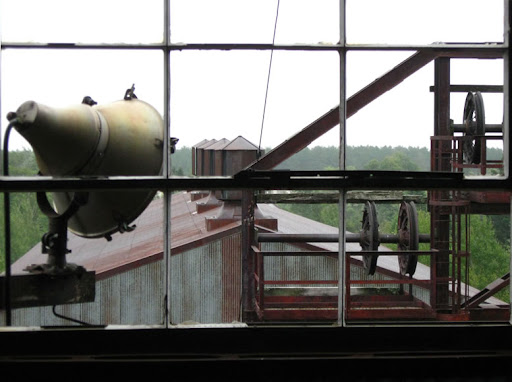 I got a real kick out of exploring this one…ruins are one thing, but you rarely if ever get to go up in one of these babies. There’s only a few left standing in all of the Copper Country. The old headframes were made of wood, and any steel ones that ceased operations prior to WWII were then dismantled and melted down into battleships. So only the most productive and longest-lasting mines remain fully preserved like this. 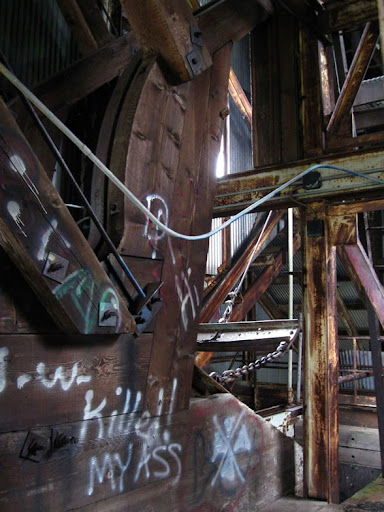 I watched out the windows as the sky let loose horrendous torrents of water on the village of Osceola. The rain squalls were so heavy that I could feel the whole headframe moving as it was buffeted by the weather. I realized that since I would have to wait for a break in the downpour to descend the steel ladder and tramway again, time would be of the essence, so I went back to the wooden platform to wait for that break in order to spring into action without wasting a moment’s time. I had to sit there for quite some time, but I didn’t mind. It was really something to watch that rainstorm. The sound and smell of it were quite soothing actually. Finally I made my exit, and hit the road south to the Houghton Lift Bridge again. 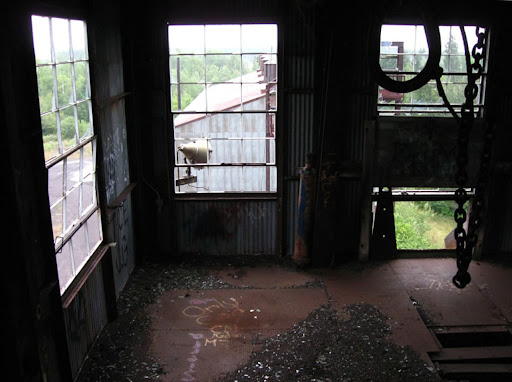 I stopped in Hancock to eat breakfast at the Kaleva, another all-Finnish diner nestled in an old sandstone building perched on a switchback mainstreet that wound up the hill from the great and wide Portage Canal. The town of Hancock itself (like its sister, Houghton) is perched on a hillside, and is peopled almost exclusively by the descendents of full-blooded Finns who emigrated in droves to come work the mines here in the 18-1900s. Nowhere in the world besides Finland itself is there a higher concentration of Finns. 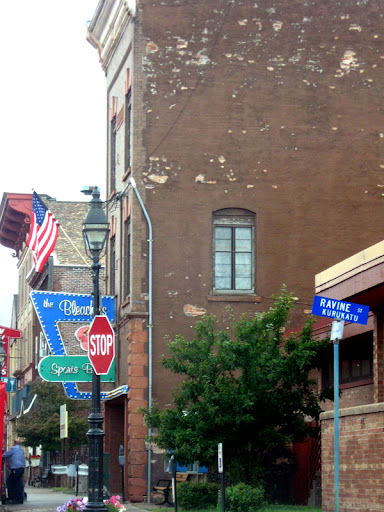 The lightpoles and storefronts all are adorned with both the Finnish flag and the American flag. It’s really quite a sight.

Email ThisBlogThis!Share to TwitterShare to FacebookShare to Pinterest
Labels: Houghton County, Osceola Mine #13