The Michigan factory where the iconic American taxicab had been built since forever, is being demolished. As a one-time cabbie myself, I have a bit of sentimentality attached to this one.

The company is Checker Motors...


I had been looking for an excuse to drive out to Kalamazoo for quite some time. I just love that town for some reason. Lots of good (and humorous) memories there. My cousin went to school out there. And lots of memories hanging out in all the old paper mills too. 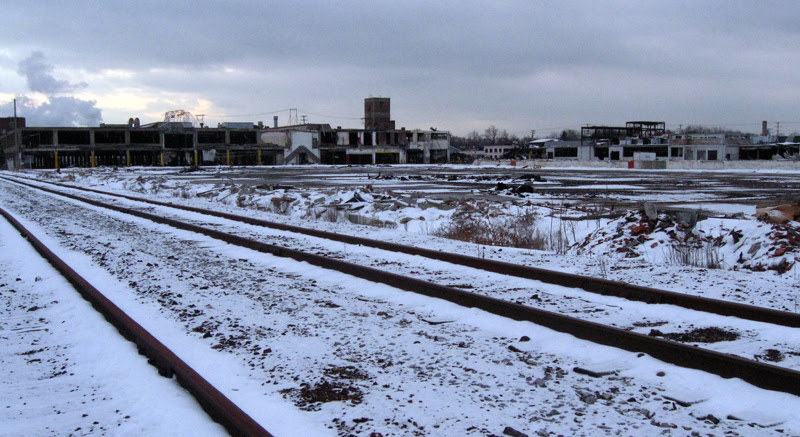 I knew that the Checker Motors Corporation had their old headquarters and factory out there on the north end of town, but I was under the impression it was still in use to some extent. Recently Kalamazoo's native son and fellow trespasser David Kohrman told me about the announced demolition of the Southwestern Michigan Sanatorium and he also mentioned that the Checker Motors Plant was actually already under demolition. Not only that but part of Plant #1 had burned down in a massive arson on Devil's Night this year. 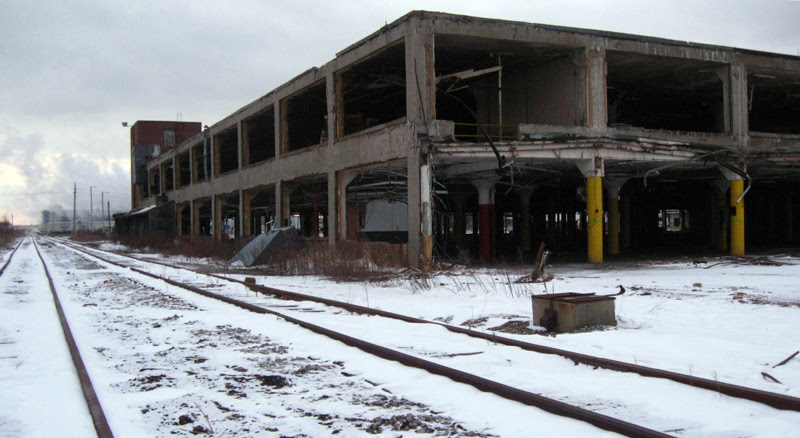 I was stunned by this, and immediately resolved to make an emergency trip out there to see if I could get a taste of it before it went all the way down. I managed to get Hank to tag along for the trip...and hopefully we could also make one last tour of the Kalamazoo Vegetable Parchment Co.'s plant as well before demolition on that got too far along. 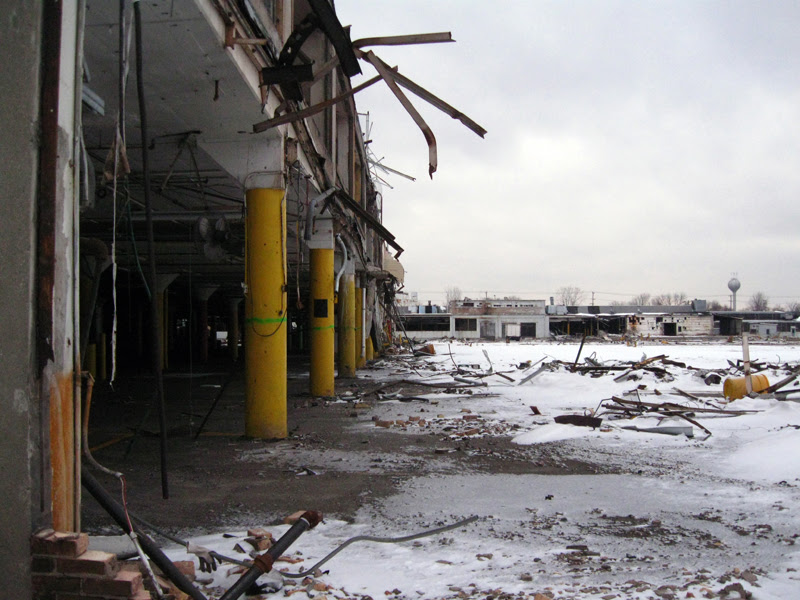 I had the day off, but I was scheduled to do a tour of the old Wayne County Building until 1pm, which would eat into our time for going out west to K-zoo. As it turned out, I was even later arriving in K-zoo than I expected, as I managed to sneak up into the tall tower. Normally I would never keep a friend waiting, but that time it was important!

Hank and I arrived in town just before sunset and met David on the side of the road near the old Checker test oval, where he gave us the skinny. Unfortunately it was so late he didn't have time to stick around, so Hank and I parked and made our way alone up the railroad tracks that led past the factory. Demolition had indeed begun but there was still a lot left, even though Plant #3 was totally gone. 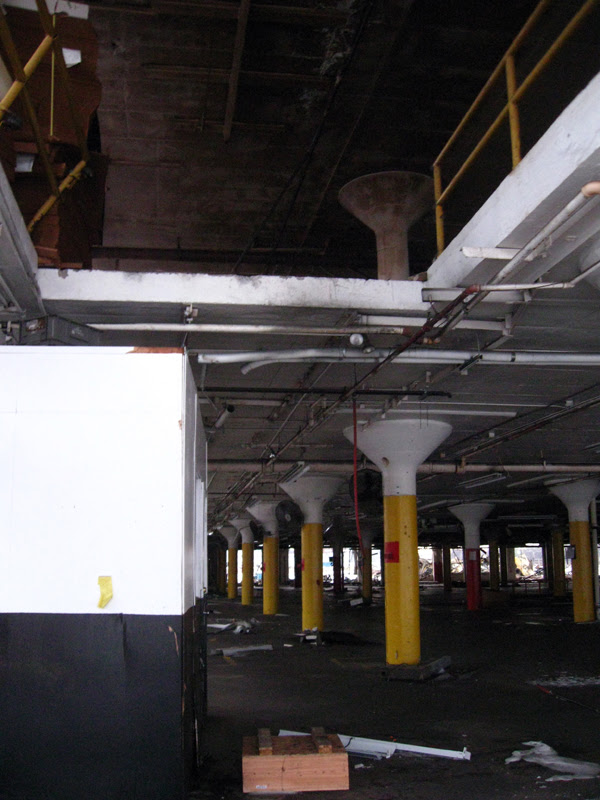 Looked to me like this place could be another Albert Kahn design...my colleague David Kohrman later informed me that this was in fact an Albert Kahn building, built in 1929 as the body plant. Mr. Kohrman recently authored an article on Checker Motors for the Kalamazoo Public Library. 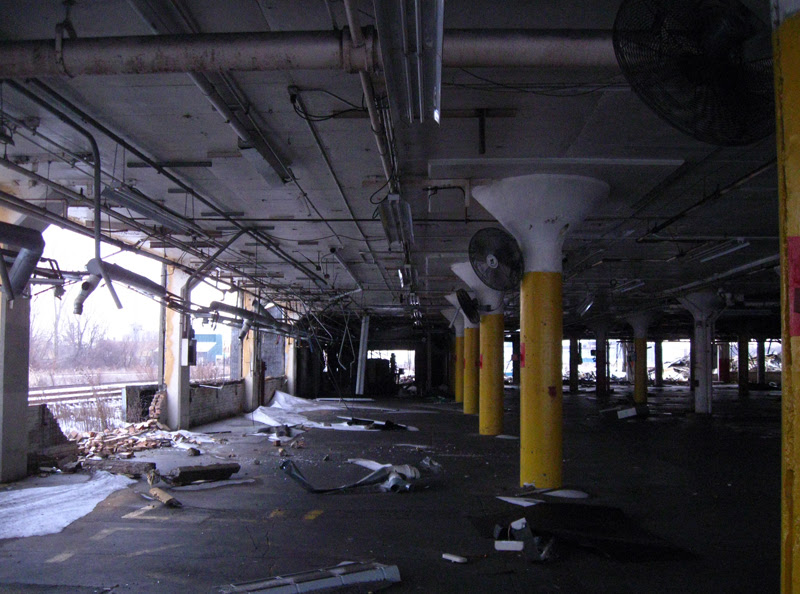 Checker Motors was founded by Morris Markin in Kalamazoo in 1922 after he merged two nearly bankrupt companies (one of which was Commonwealth Motors), in order to fill an order by Checker Taxi Co. in Chicago for cars to use in their fleet. Markin bought the buildings previously used by Handley-Knight Co. and the Dort Motor Co. Body Plant for his production facility; Detroit, Lansing, and Flint were not the only Michigan cities to have a strong automotive industry. As well as those marques just mentioned, Kalamazoo was also home to the Barley Motor Car Co. 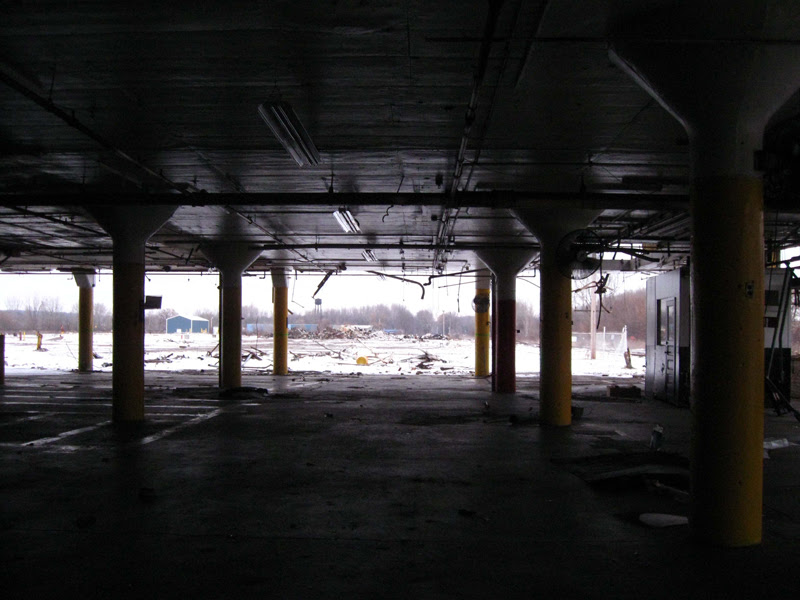 Markin eventually acquired Checker Taxi as well and began producing the classic cabs, while simultaneously owning and running the company that operated them--a company that was in direct competition with New York's Yellow Cab, owned by John Hertz. I believe this is why he was taken to New York State court in 1964 on antitrust charges. Rather than allow another body maker to step in, he began selling Checkers in New York. 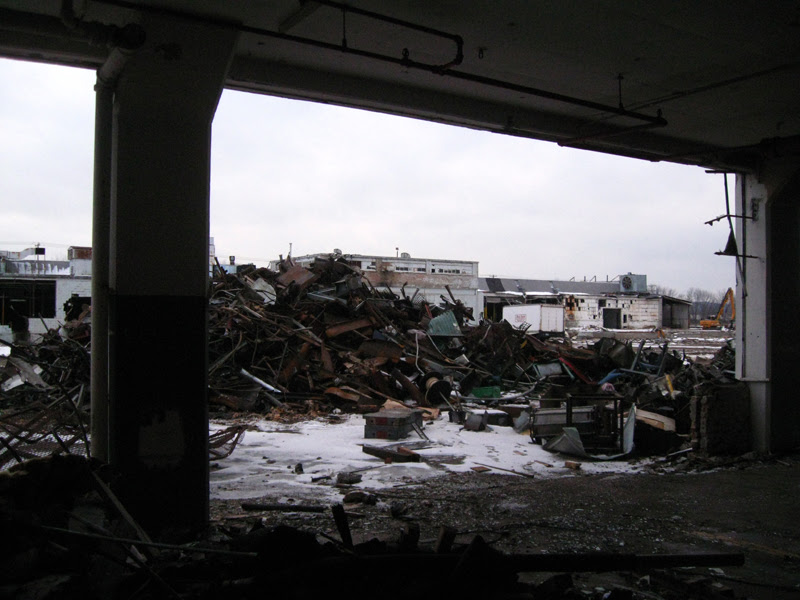 Eventually in 1958 Checker Motors began selling consumer passenger cars, and even though total production volumes were still only in the four-digit range, Markin's company turned a profit every single year until 1981--that's 60 years, which has to be some kind of a record. Checker also supplied OEM body stampings for Ford and Hudson truck cabs, and truck bodies for REO Motor Car Co. They also built trailers for Sears-Roebuck. 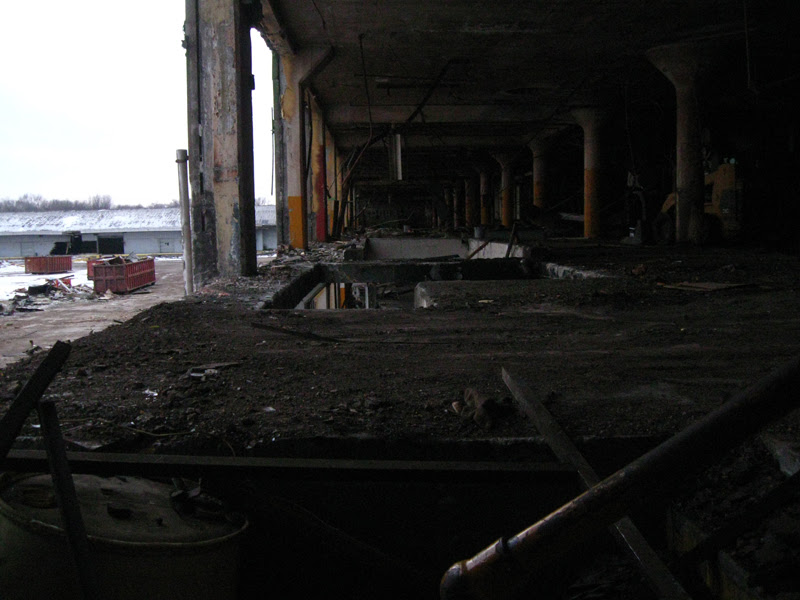 Checker Cabs were originally powered by Continental Motors engines (based in Muskegon and Detroit), but eventually switched in 1965 to Chevrolet engines. Near the end of their taxicab production run in 1982, some Checkers came equipped with the Oldsmobile diesel 350s. 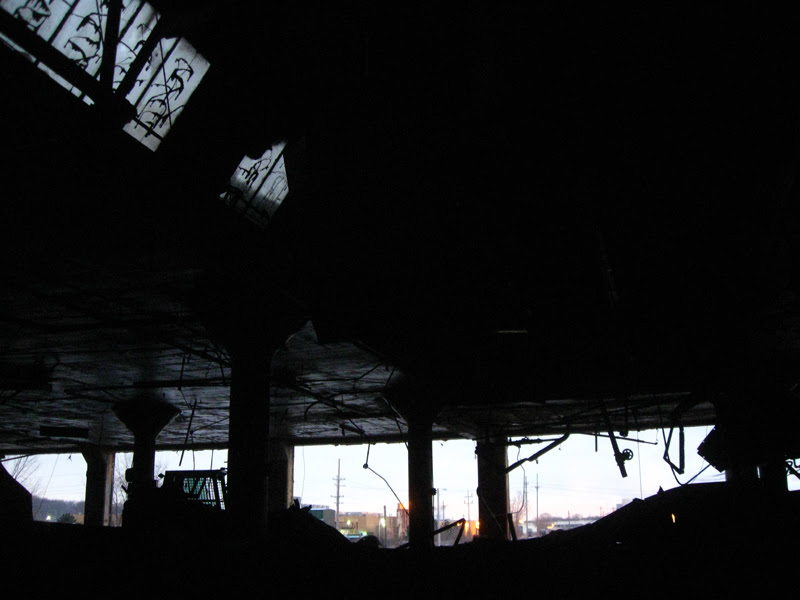 Checker also built a few prototype GPs (jeeps) that were tested by the U.S. Army prior to American involvement in WWII. They were called the "Bantam," and featured four wheel drive and four wheel steering. 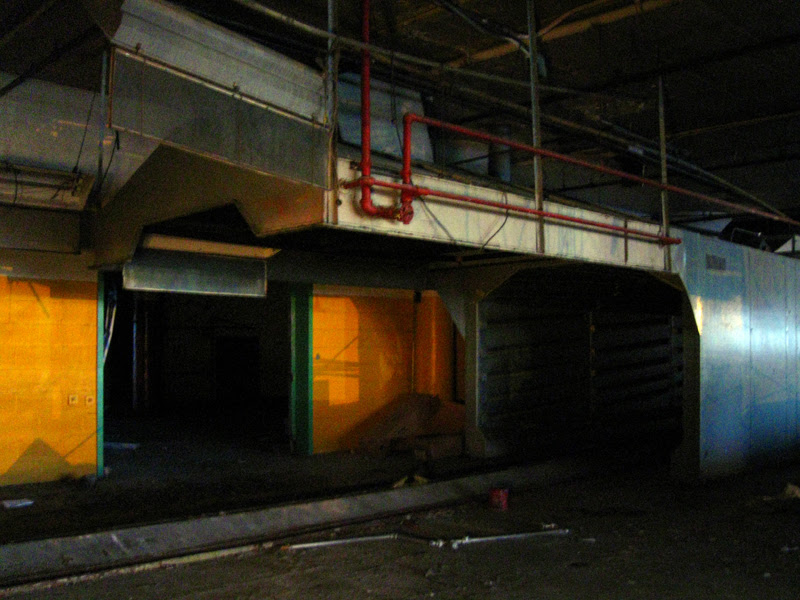 During the war, Checker built tank retrieval trailers, tank recovery vehicles, and several types of trailers. One Checker-built GP still exists and is at the Gilmore Car Museum, not far from here. 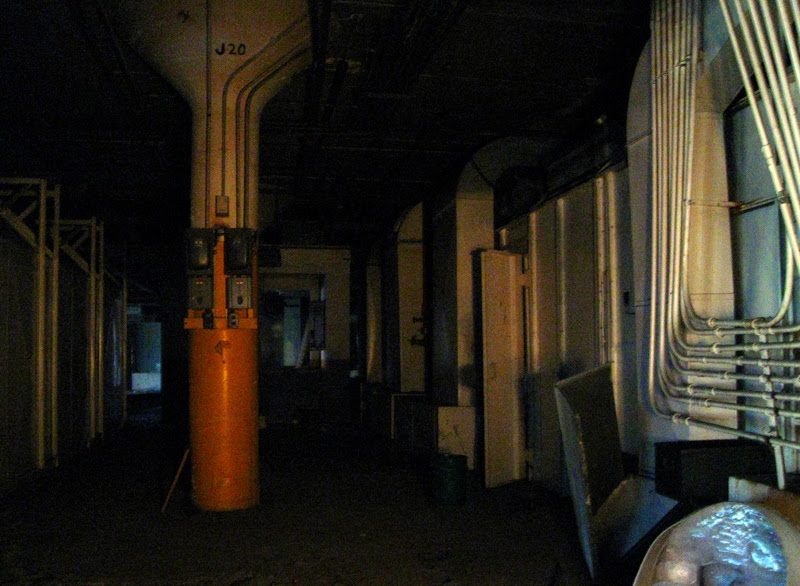 In my lifetime Checker cars were always old-fashioned, in stark contrast to regular consumer passenger cars, holding onto that old 1950s body style for decades. The reason was for ease and economy of repair. It was designed to be a fleet vehicle, and it had a reputation for being indestructible even under the hardest use...but that stubborn anachronism is also what made it iconic. Part of the reason is that being such a small company, Checker hardly had anything in the way of a design department--it was merely housed in an unused corner of the plant that they half-assedly partitioned off from the production floor with some tarps.

I worked on one built in the '80s, and it was basically just like a Chevy truck under that 1950s skin. Even though production of the Checker taxicab ended in 1982, they remained in use on the streets of Manhattan for almost another three decades, attesting to their durability...the U.S. Army probably could have stormed Bastogne with a couple Checker cabs just as easily as with the Willys jeeps they adopted. 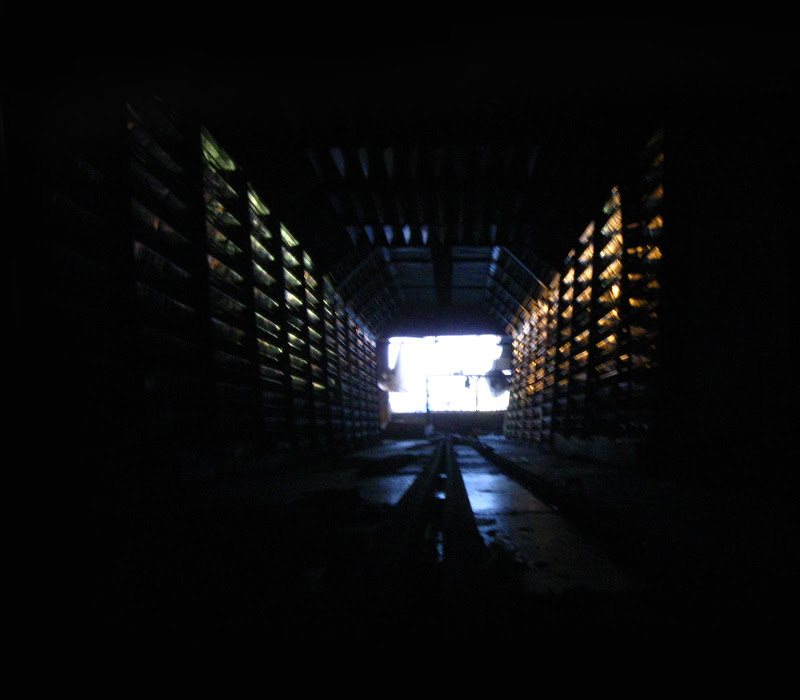 After Morris Markin died in 1970, retired GM President Ed Cole bought into Checker with the intent of rejuvenating the company. His plan was to buy Volkswagen Rabbit chassis and have them shipped from the new VW factory in Westmoreland, PA to Kalamazoo where they would be cut in half and lengthened by inserting a section with a higher roof, and call it a taxi.

This never came to fruition however, because Ed Cole died when his private plane crashed during a storm near Kalamazoo in 1977. 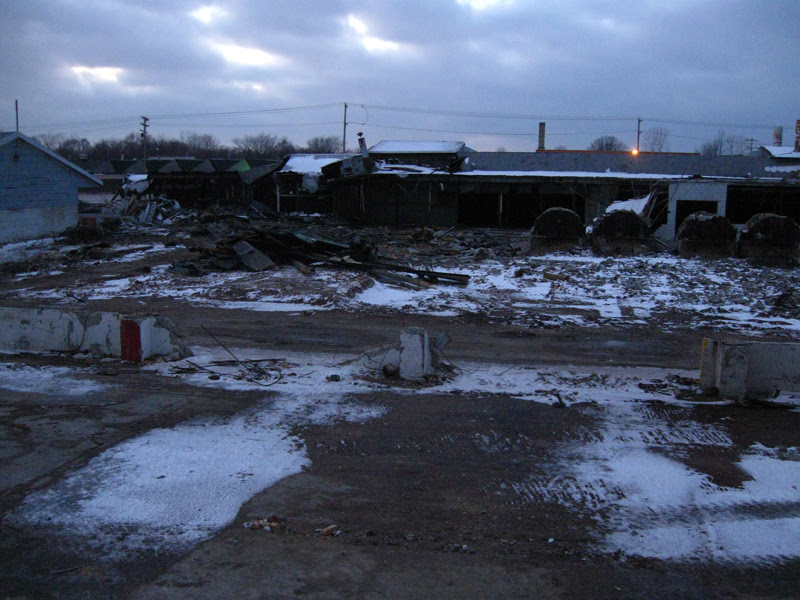 The Checker plant was even used as a set for the 1978 comedy starring Richard Pryor and Harvey Keitel, called Blue Collar.

In the early 1980s, New York City loosened its taxi regulations, allowing standard production sedans to operate as taxis, which basically meant that the Big Three automakers could start selling Crown Vics and Caprices to the taxi companies. Checker Motors was unable to compete in that kind of market, and in 1981 posted their first fiscal loss since going into production in 1922. 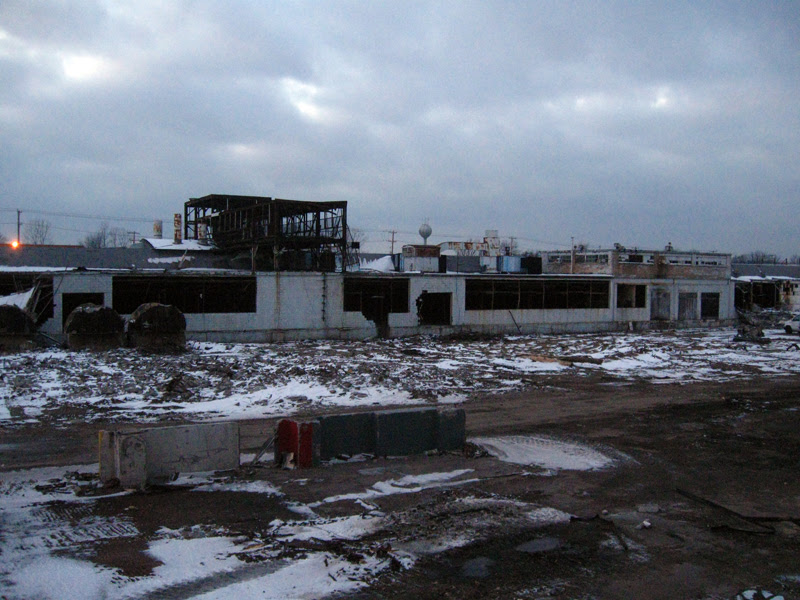 Checker lived on however as a parts maker and supplier, traded hands and was renamed several times up to 2010, while still under the ownership of David Markin, son of Morris Markin. Checker did body stamping for various GMC and Chevy truck lines, and made some chassis components for Cadillac. They also did work for Chrysler LLC, Navistar Inc., and GM Shanghai. 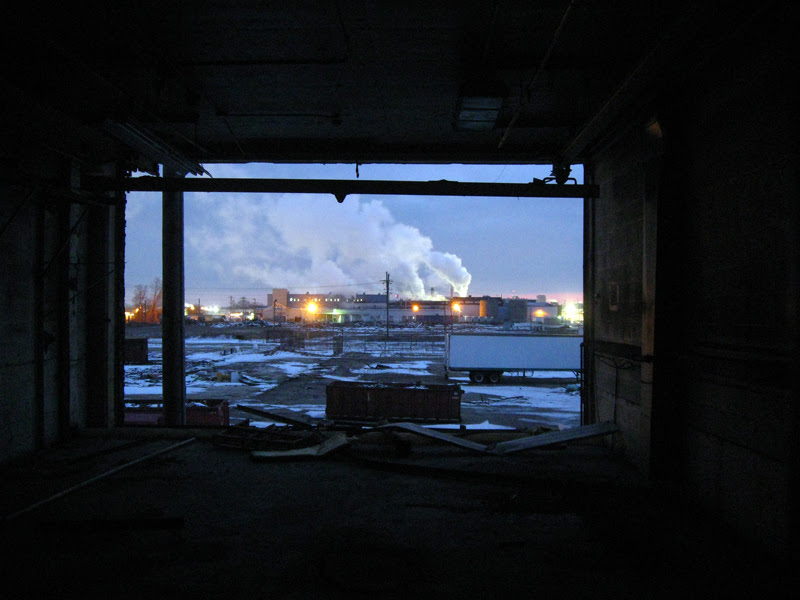 At the time the automotive industry crashed in 2008, Checker employed 340 people in Kalamazoo. 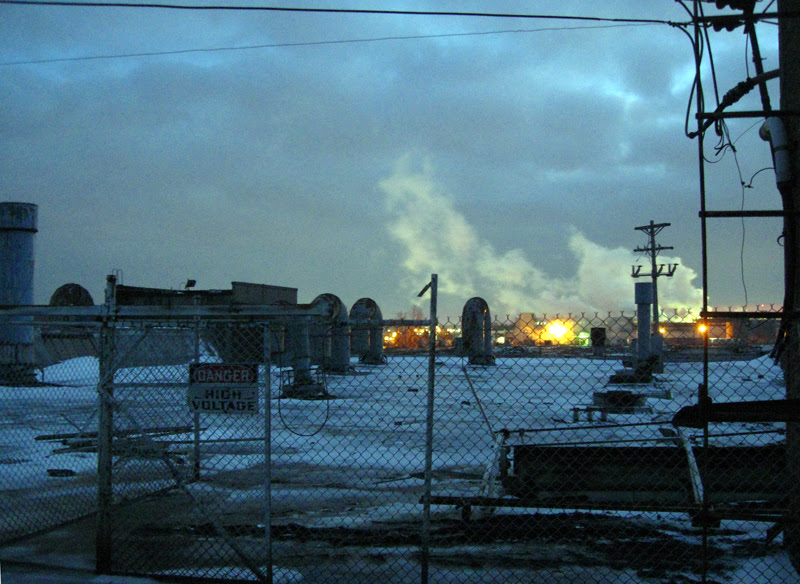 However, David Markin was one of the people who fell victim to notorious asshole Bernie Madoff, and in January, 2009 Checker filed for bankruptcy, making them the 8th-largest auto supplier to go belly-up...just before GM and Chrysler went down for the count. 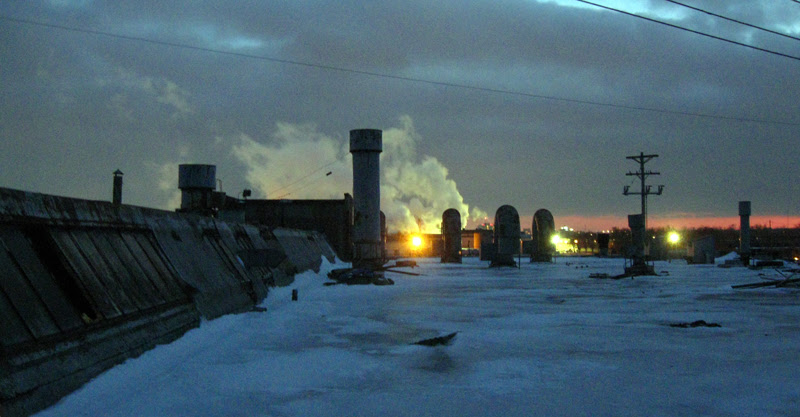 After some court battles with their union, Checker was allowed to market themselves to a potential buyer, and were bought up by two Canadian suppliers for $650,000 and $950,000 each. However, it was said that "much of the company's machinery could not be sold because, in the wake of downsizing throughout the automotive industry, the market has been flooded with similar equipment." 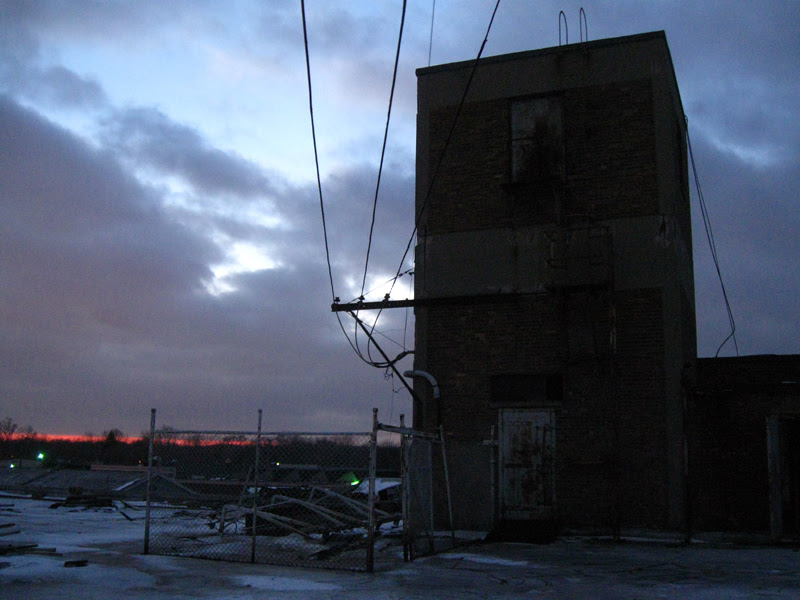 I can personally vouch for that, having seen the piles and piles of now-surplus assembly line equipment in the various recently closed GM plants I've explored. 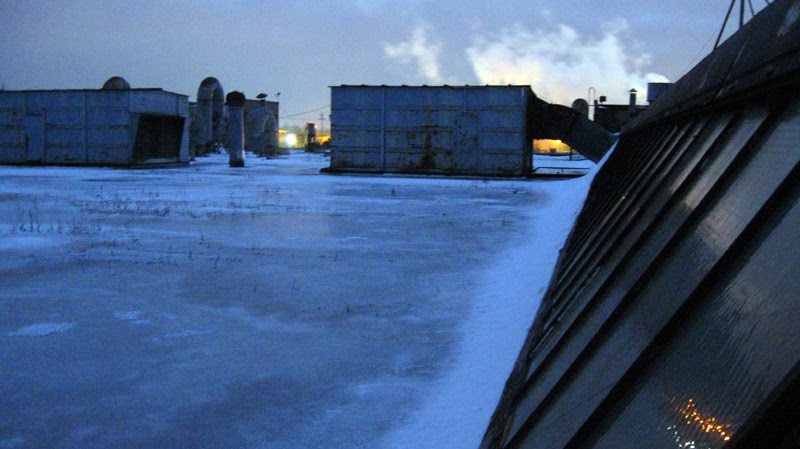 The remaining tool & die equipment from Checker was shipped to Canada to make the Buick Lacrosse. 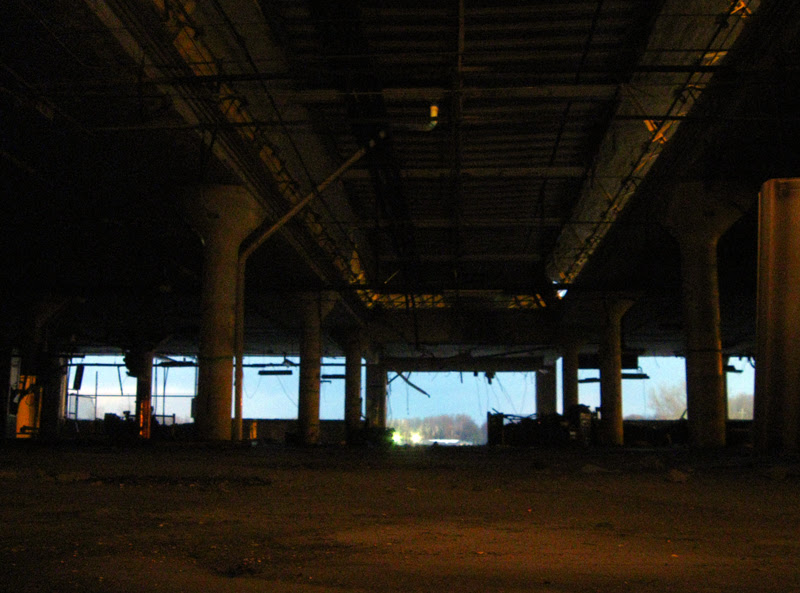 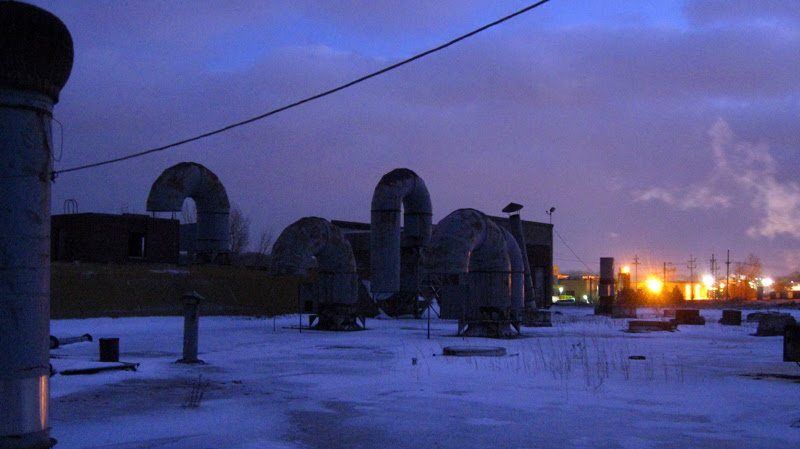 This is Plant #1, part of which burned on Devil's Night in what was probably Kalamazoo's worst blaze in many years: 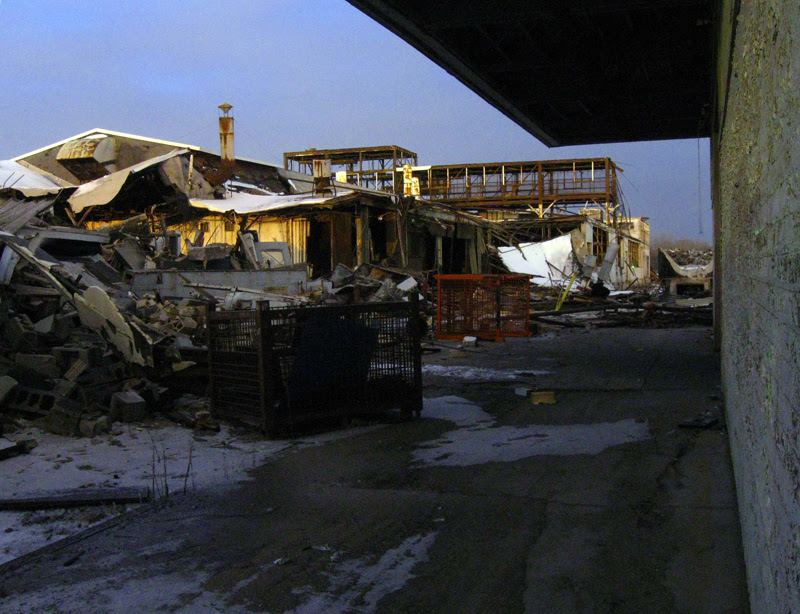 The Checker Motor Company ceased to exist on January 14, 2010 with the sale of its Kalamazoo headquarters. It sold for only about $3 million to the Jones Group, who sold off the assets and would clear the 72-acre property. Checker president David Markin was quoted in the New York Times as saying, "It's finished. Our family is very distressed about the closing of the company, but it became inevitable."

The last Checker Motors taxicab used in New York City was retired in 2010. 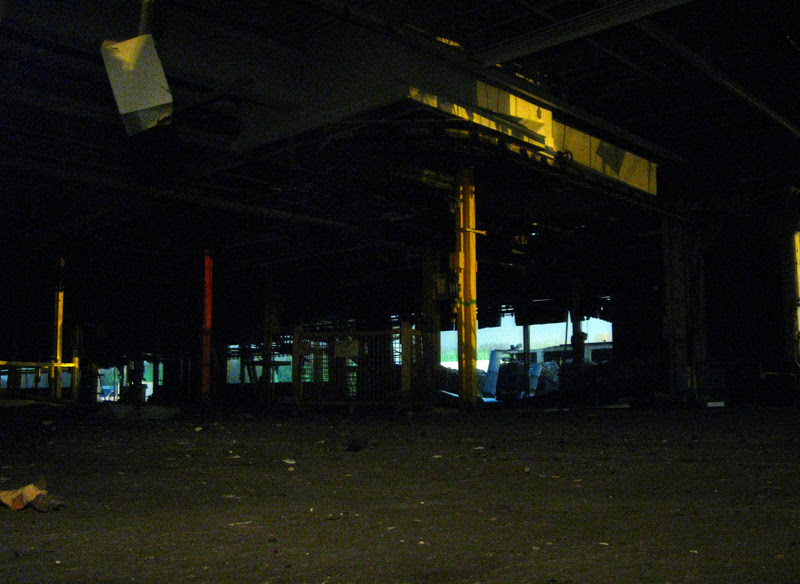 Rogue journalist Charlie LeDuff is known for his choice of a Checker as his personal car, which he used to escort TV personality Anthony Bourdain around Detroit for an episode of his show. 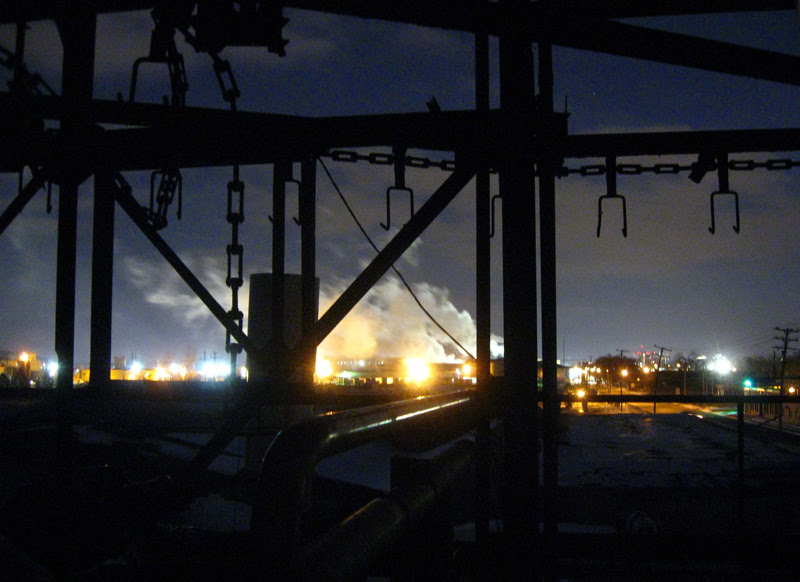 This is Louieland. You want America, go outside!