Where History Goes to Die

Remember that scene in the end of Raiders of the Lost Ark?

The white boat is the lifeboat from the William Clay Ford, a freighter in the Ford Motor Company's fleet that hauled coal and iron ore to the Rouge Plant since the 1920s. The ship has since been decommissioned, but her forecastle was grafted into the structure of the Dossin Great Lakes Museum on Belle Isle. 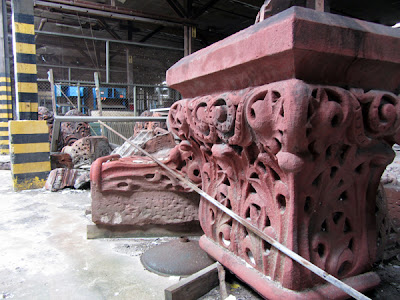 See if you can figure out which building these decorative pieces used to be part of.  Here's a hint.  It was torn down in 1974. 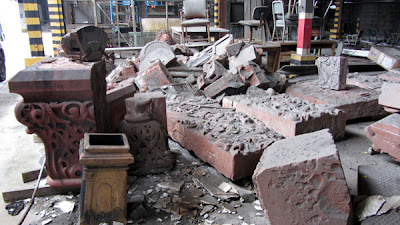 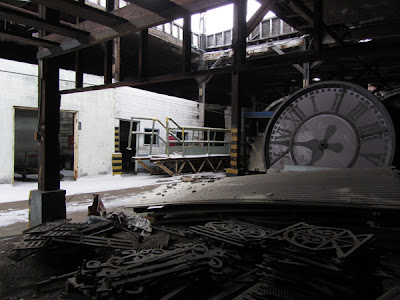 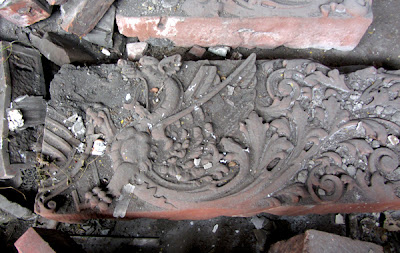 This stuff made me think of that part in the beginning of H.P. Lovecraft's Call of Cthulhu... 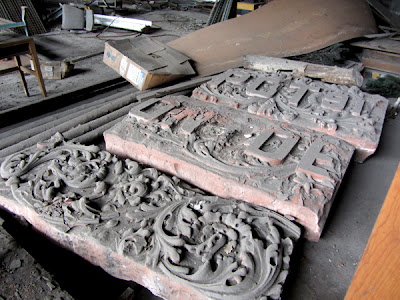 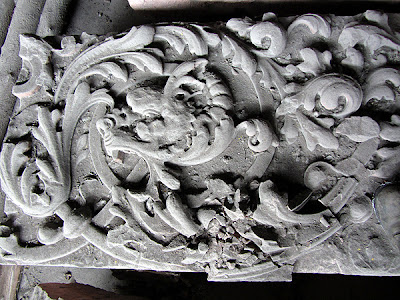 This guy definitely looks like he comes from the Outer Rim: 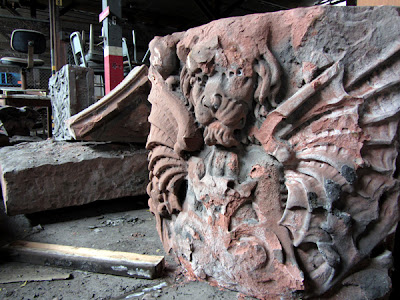 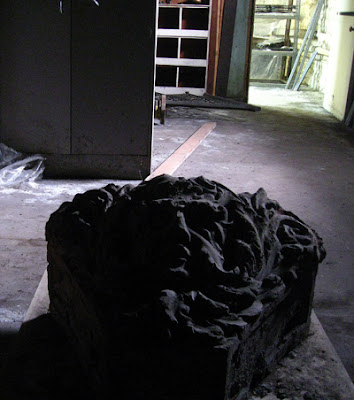 Give up? They're pieces of the old Union Depot at Fort & 3rd Street. 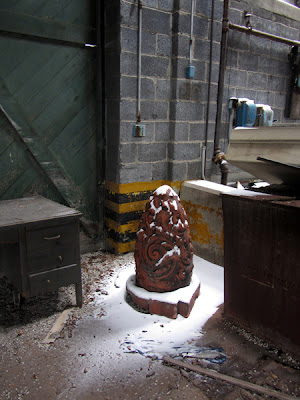 Plaques.  There are a lot of them in here: 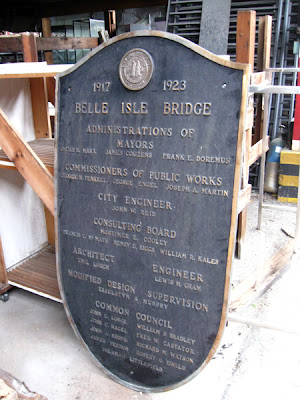 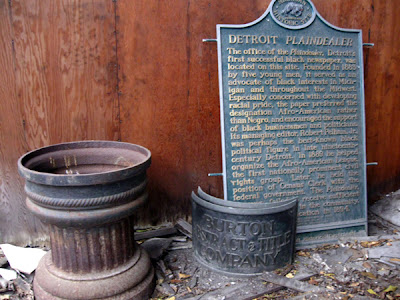 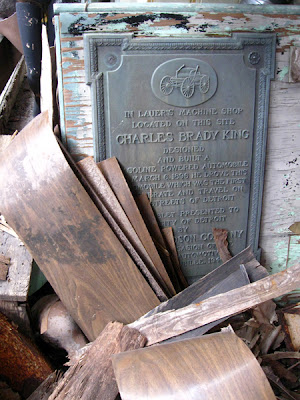 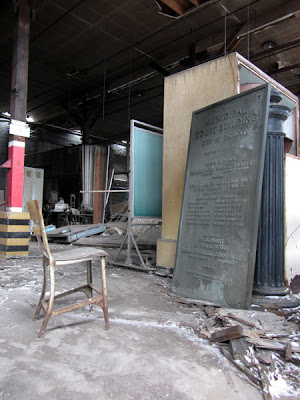 That last one (and the lamp posts behind it) comes from the City of Detroit Municipal Court Building: 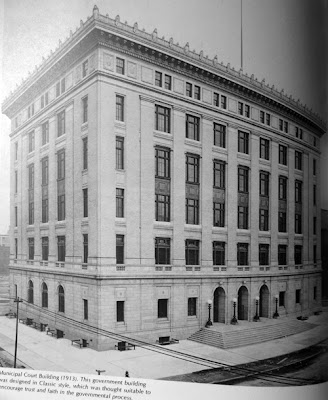 According to what's written on the plaque, construction for this building started in 1915, under Mayor Oscar Marx's and Dept. of Public Works Commissioner George Fenkell's administrations.  The architectural firm responsible for its design was the great Smith, Hinchman & Grylls.  This building stood on St. Antoine, and according to the book Smith, Hinchman & Grylls: 125 Years of Architecture and Engineering, its design was supervised by Austin Howe, and was later used as the Recorder's Court...


The grandeur of the exterior continued inside in a variety of marbles, bronze fixtures, and plaster ceilings.  When the new Murphy Hall of Justice court building was erected in 1971, the old building was doomed, and was demolished shortly thereafter.

It was where the famous trial, The People of Michigan v. Ossian Sweet took place in 1925, and Clarence Darrow delivered his seven-hour-long civil rights landmark closing statement, and Presiding Judge Frank Murphy instructed the jury that "a man's house is his castle." I have a hunch that this decayed item was the witness stand from that courtroom: 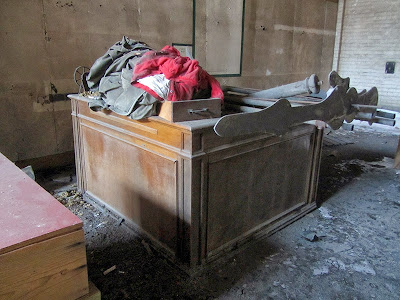 (The clock hands sitting on top of it also went to Union Depot.)

Interestingly enough, this next building also used to stand on St. Antoine, and was likewise called the Municipal Courts Building:


It was torn down in 1962 (around the same time as Old City Hall), and the Frank J. Murphy Hall of Justice now stands on the spot.  In its later years it was also used as the Detroit Police Academy, and the cops who worked there reportedly referred to it as the "Triple Nickel," in reference to its address, 555 St. Antoine (probably while wiping powdered sugar from their lips).

Therefore, I have to assume that these two court buildings stood during the same time period, shared or traded the function of Municipal Court over the years, and were actually across the street from each other.  Cursory Googling turns up little else about either of these structures.  Furthermore, I have a hunch that all three courthouses were designed by Smith, Hinchman & Grylls.

A huge clock, that perhaps once hung in the lobby of the Union Depot on Fort Street...the faces of the clock are solid marble, while the body is wood: 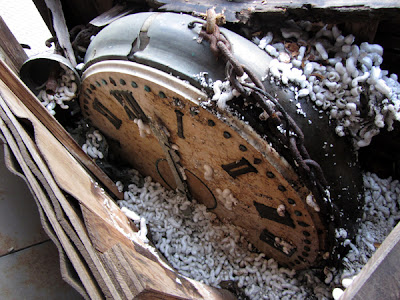 Miscellaneous decorative iron fencing, taken from the front yards of the Gilded Age mansions that once graced areas such as the Cass Corridor, Brush Park, and East Jefferson, most likely demolished by the 1960s: 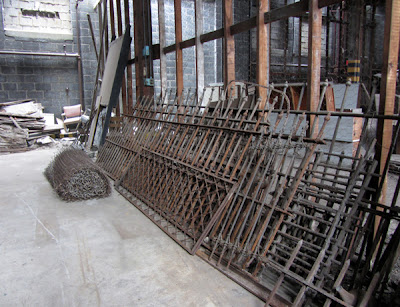 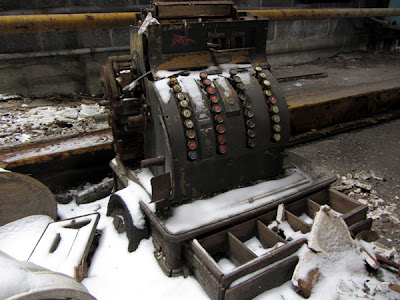 An iron lung, marked "HKH," most likely meaning that it had been taken from Herman Kiefer Hospital, which was originally built as a tuberculosis sanatorium: 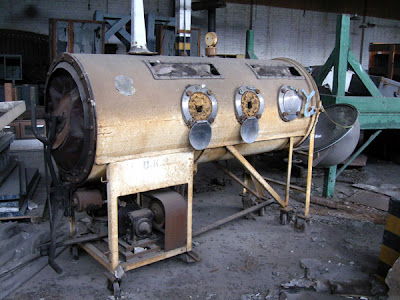 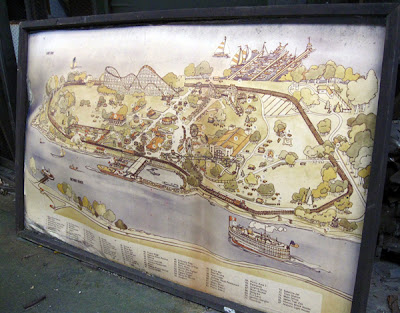 Another angel has lost its parish: 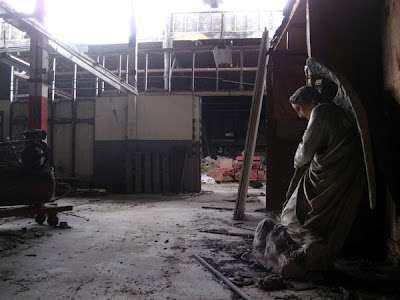 Hidden upstairs, all by itself, what appears to be an ancient birch bark canoe: 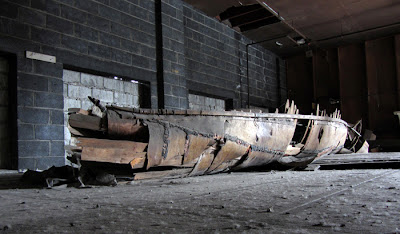 I have no idea how old this thing is, or where it would have come from, or how long it has been sitting here but if it isn't antique then it is definitely the real thing, and more than just a museum reproduction...with remnants of pine sap seals at the joints. It's a bit creepy, yes.

These Argonath-ish dudes are from an Albert Kahn / Corrado Parducci structure, the Maccabees Building on Woodward: 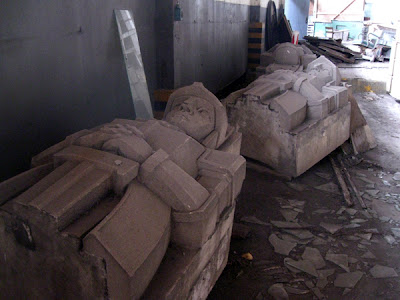 I hear they were removed because they were later found to be too heavy for their support structure at the crest of the building, but I think it may've been just as much to dumb-down the architecture of Detroit's aging building stock in an era (ahem, 1950s) when sleek and streamlined was the "in" thing (though oddly enough the automobile styling of the era was quite the opposite, and filled with bric-a-brac). I find it hard to believe that an Albert Kahn building would contain any such design flaws.

Nonetheless, a pedestrian was killed on Woodward Avenue in 1959 when a piece of stone ornament fell from a downtown building, and the city's Buildings and Engineering Dept. went on a crusade to remove excessive, dangerous cornices from downtown buildings. 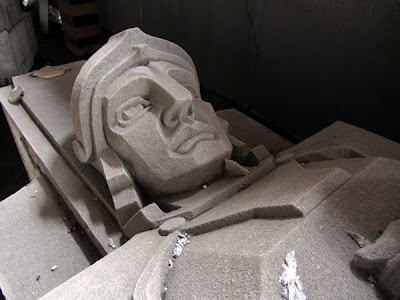 The clock faces however I'm not sure whether they're from Old City Hall or the Union Depot:

These might be from a church, or the steamship City of Detroit III?:

Sources cited in this piece:
Smith, Hinchman & Grylls: 125 Years of Architecture and Engineering, by Holleman & Gallagher

Email ThisBlogThis!Share to TwitterShare to FacebookShare to Pinterest
Labels: Warehouse 2