Day 4
Dawn started to hint of its coming, and this time when I awoke to find that the rain had stopped again, I took that as my queue to break camp while I had the chance. I looked west and saw another dark rain squall coming in, so I acted in earnest. No sooner had I fit all my gear back into the pack and started donning my hoodie than it started pouring again. I threw my pack on and draped the camouflage poncho over myself. Checked my compass and started walking.

I had decided to forfeit the trail and the stupid map and just hike the beach the rest of the way. I didn’t feel like dealing with mosquitoes or wading through wet foliage the whole way through the woods, plus the beach is an infallible way to get to the docks. The halfway point would be Vessel Point, and I had about two miles to hike today. Which is good because I fully intended to go very slowly, ha. For some reason I was very sore in my hips and back and feet and…well everything. Although I'd only hiked 11 miles yesterday I had a heavy pack, and it seemed like something on it, perhaps the height of the hip strap, was out of adjustment.

As I trudged the pathless beach in the downpour, I stopped often; about every couple hundred yards to just stand still and rest. Not because I was that beat, but because I wanted to savor the last bit of this voyage. When I arrived back in the “Village,” I was the only person about. Place was deserted. Obviously I was very early, so I meandered around in the cold, wet, windy morning. In front of the rangers’ houses, I saw this windlass, no doubt a remnant of the old lifesaving station: 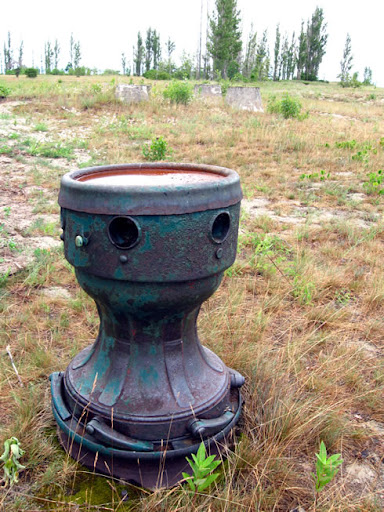 Note the four ruined concrete footings in the background as well. 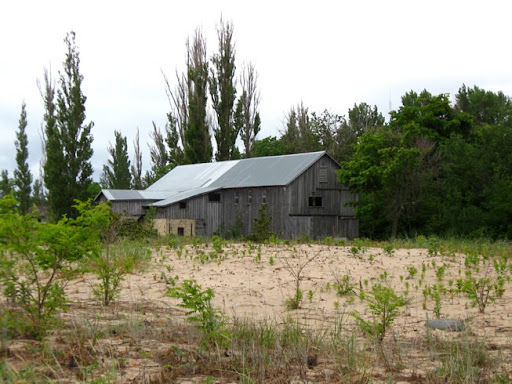 I also checked out what I think was the sawmill built by Peter Stormer using archaic equipment salvaged from the old Crescent City mill. 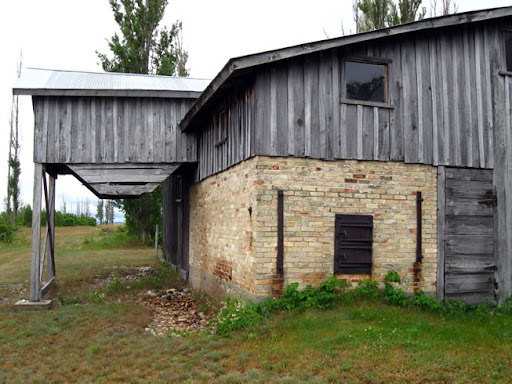 More people began filtering into the “Village” and soon after, so did the ferry. We lined up our gear on the dock and jumped aboard. I could not yet tell whether the seas would be rougher today, though it sure didn’t look friendly. Despite the moodiness of the skies, the ride back to the mainland was very smooth and enjoyable, and I went up above decks to take these pics: 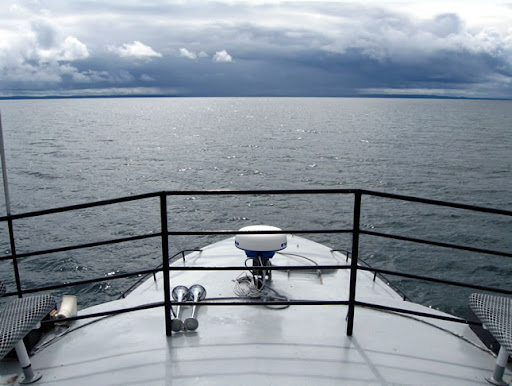 Off the bow, rain squalls still assailed the mainland. 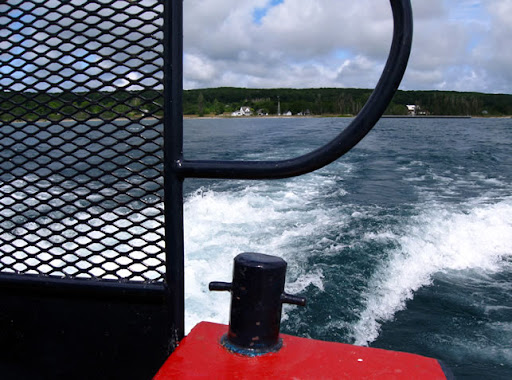 Looking aft, the island disappears into the distance. 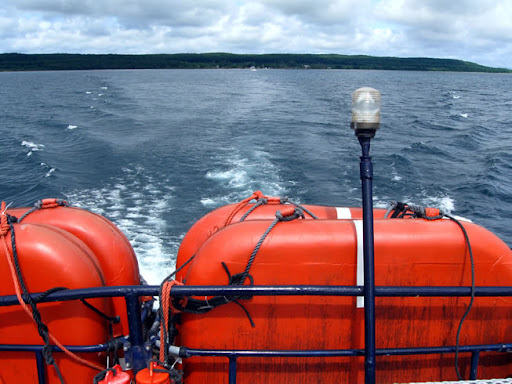 Here’s a zoomed shot looking south at about the halfway point in the journey; the white speck at right is the Manitou Shoal Light: 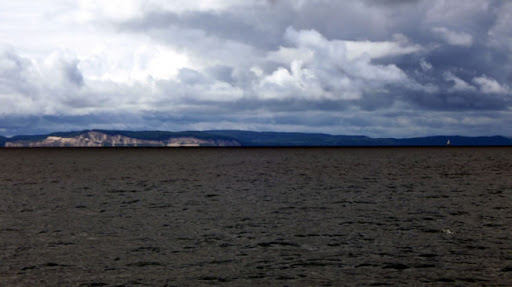 Here is another view south some time later, this time you can see a passing freighter, and at right is the edge of South Manitou: 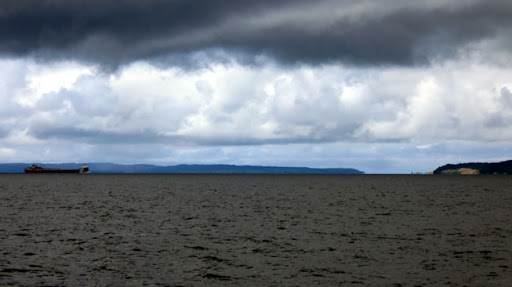 I also sat on the fantail this time, to enjoy the (relatively) nice weather with some of the returning Boy Scouts: 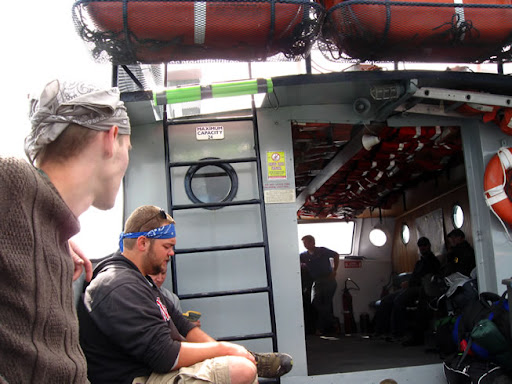 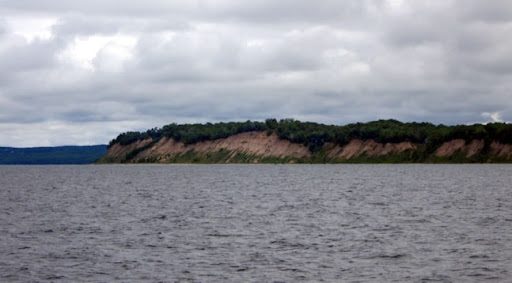 As we put ashore, the weather became more friendly, and I was immediately stoked for some food and a beer. I patronized one of the establishments in Fishtown, and gobbled up some awesome whitefish.

With this leg of the journey complete, I retrieved my car and began climbing back down out of the Leelanau to Traverse City. Rolling down M-22 is some scenic driving...some of the best in lower Michigan. I had plenty of time to make a return trip to Newaygo, and when I arrived I drove straight into the county park. 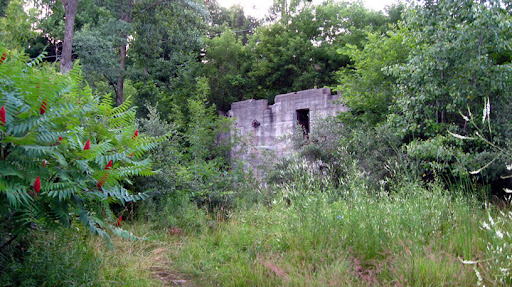 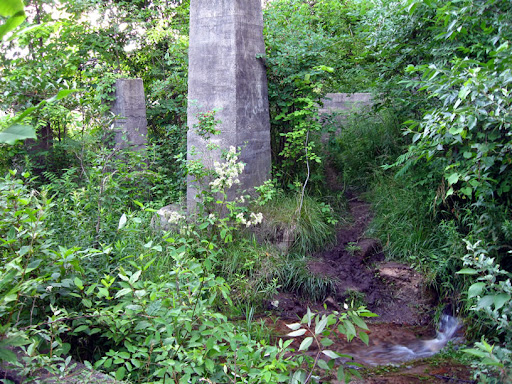 This was a lot easier now that I wasn't trying to do it in the dark. 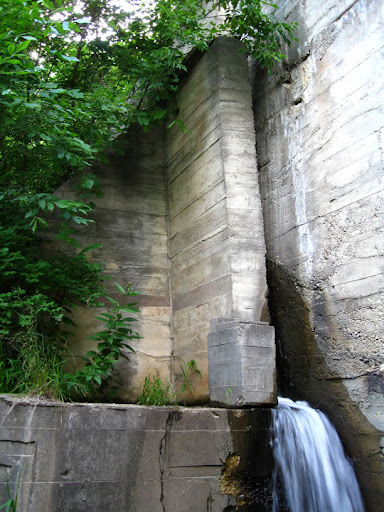 Just within the verge of the river’s wild overgrowth hid monstrous, heavy geometrical shapes of unknown function, little removed from the wild, cyclopean ruins of H.P. Lovecraft’s nightmare cities of betentacled Elder Gods...the cracked pillars and fallen arches of his eldritch utopias, ringed ‘round and subdivided by rivulets of tiny crystalline streams and waterfalls trickling amongst the standing stones, wrapped in their verdant foliage and creeping vines. 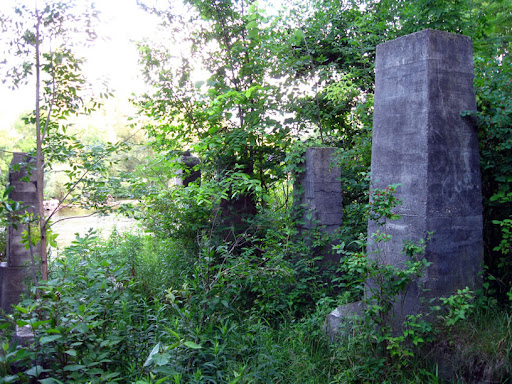 It still left mysteries to be solved—was this actually the Penoyer Mill I sought, or was it some other dam or mill? 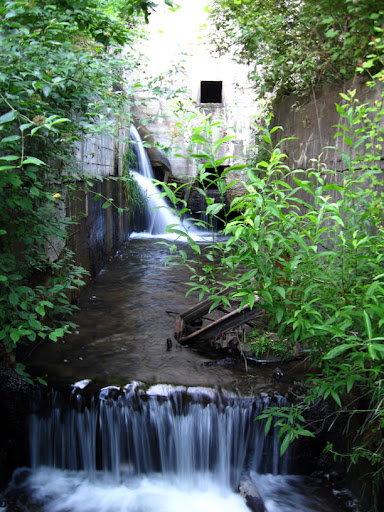 It definitely seemed like a dam was part of these ruins' original function. Whether it was built to power a single mill, or was a hydroelectric dam for municipal power was not readily discernible through the heavy overgrowth. Nor could I tell how many more ruins there might be or might have been. Furthermore, I was of the understanding that the Penoyer Mill was located on the nearby Penoyer Creek, not the actual Muskegon River…. 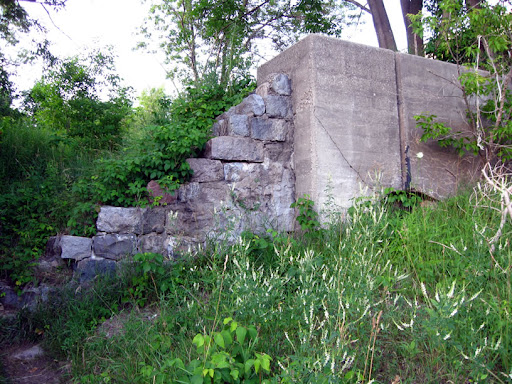 According to the Newaygo County Historical Archives,

By 1853, the Penoyer mill was no longer operating, and that year all the Penoyer properties at Newaygo were sold to the Newaygo Company, a group of lumbermen from Glens Falls, New York, who lived in an area of the white pine belt that was already feeling the pangs of timber depletion. Newaygo at that time was touted as having "water power ...unsurpassed by any village in the State," and as if to establish this boast, in 1854 the Newaygo Company opened the largest water powered sawmill in Michigan, taking the source of its power from the mighty Muskegon, rather than puny Penoyer Creek.

Probably the Penoyer mill was left to fall into decay, and its dam to be slowly eroded away. Details of its demise are not known, but it is believed that today "only archaeological remains of this pioneer operation are to be found.” 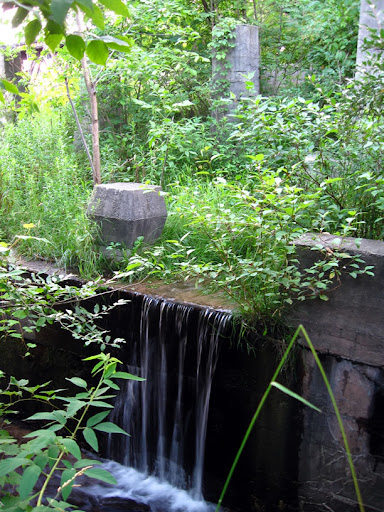 Off and on over the years I'd tried to find this location's true history, but the internet was of little help, until I came across something called the Croton Hydroelectric Plant. But I soon realized that that was an incorrect assumption as well. The fact is, there are (and were) a lot of dams in Newaygo County. 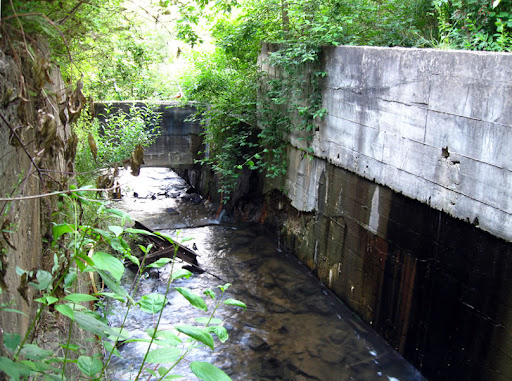 Thanks to the October Project, I finally figured out recently that these ruins actually belonged to the Newaygo Portland Cement Co., built from 1899 to 1900, and found a few historical photos there as well. According to them, this site was also home to several other manufacturing concerns, the first of which was the Newaygo Furniture Company in 1884. Rowe Mfg. Co., the Newaygo Separator Company, and Newaygo Engineering each successively took over use of the site prior to 1899. 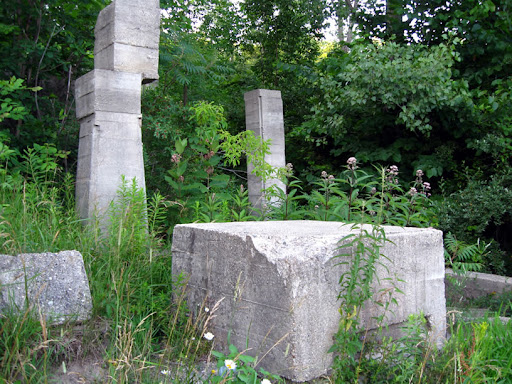 I was then able to find the site talked about in the Geological Survey of Michigan Lower Peninsula 1900-1903, Vol. III Pt. III, which calls it "one of the finest designed and equipped plants in the State of Michigan." The marl for the cement was taken from a series of six lakes located within five miles of the plant. Water for the cement slurry was drawn from the Muskegon River, which was agitated and handled entirely by compressed air; the Geological Survey notes that the efficiency of this system "cannot be overestimated" due to the fact that the typical centrifugal pumps used for that process were costly to run and wore out frequently. Of course the drawback to hydro-powered mills with line shafts is that if there is a breakdown somewhere in the driveline, the entire plant grinds to a halt. Newaygo overcame this hurdle by building an electric powerhouse...

The absence of line shafting is noticeable, each machine being equipped with an individual motor, in some cases two, which enables the mill to continue in service in case of break down of one of the motors. The automatic system for controlling the compressed air is admirable. 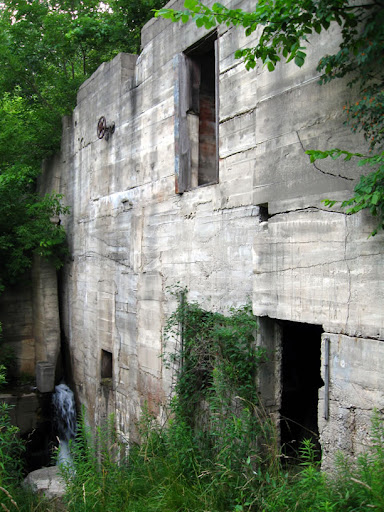 The powerhouse of course used hydroelectric power, whose original generators were powered by a rope transmission system from the turbines, which still rested in their housings as of 1976 when the HAER surveyed and compiled an inventory of historically significant engineering sites in the Lower Peninsula. 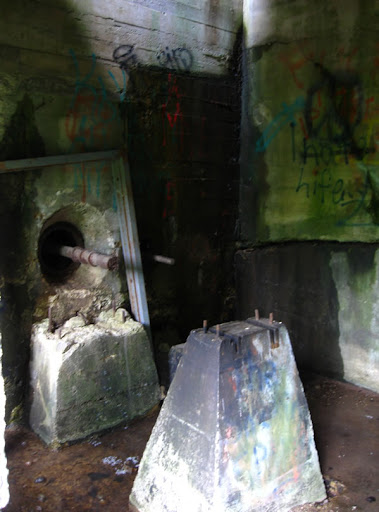 The Geological Survey continues to laud the Newaygo operation, claiming that "the cement produced by this plant is first-class in every particular, and the machinery is the best of its kind." For more technical information and specifics on the plant's processes, go HERE and scroll down to page 36. 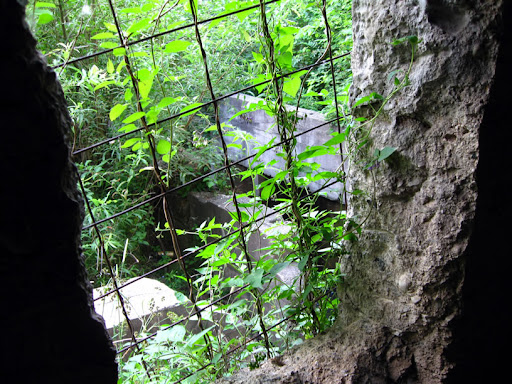 The story of the discovery of marl deposits in Newaygo County, and the founding of this plant was related in the May 9th, 1899 Grand Rapids Herald:

A year ago Charles E. Greening, of the firm of Greening Bros., extensive nurserymen at Monroe, was on a business trip through the northern part of the lower peninsula. On May 23 he delivered an address at Newaygo, and the day following joined a fishing party at Pickerel Lake, near that village. While sitting on the trunk of a fallen tree, Mr. Greening observed that the roots of the tree were covered with a white substance resembling snow. His curiosity prompted him to taste it and he detected in it a strong flavor of lime. He sent a sample to the Agricultural College for analysis, but never heard from it.

A few months later Mr. Greening met Prof. Fred H. Borradaile, State analyst, and gave him a sample for analysis. When the latter reported he startled Mr. Greening by urging him to go to Newaygo at once and buy up all the land containing the deposit that he could get his hands on, explaining that the substance was a most valuable specimen of marl.

Mr. Greening hastened to Newaygo and immediately purchased about 1,000 acres of land surrounding four little lakes, the shores and bottoms of which contain unlimited deposits of marl which is said to be of a finer quality than any heretofore discovered in this country, the analysis showing 96 per cent of carbonate of lime, with little or no trace of iron. Within a short distance of the marl beds there is to be had an abundance of clay, which is an essential in the manufacture of cement.

Construction of the Newaygo Portland Cement Co. began soon after this article was printed.

Standing on top of the larger structure: 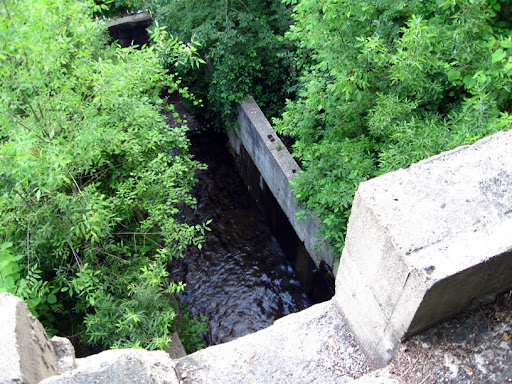 The Newaygo Portland Cement Co. sold the dam to Consumer's Power Co. in 1916, and by the 1920s the cement plant ceased to be in operation. 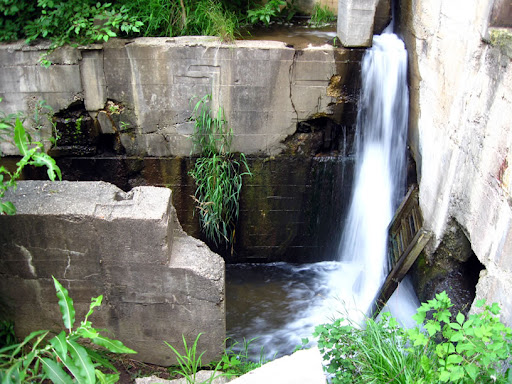 The dam was demolished by the 1970s, and the many small waterfalls you see there today are caused by the Penoyer Creek as it trickles down through the ruins to meet the Muskegon River on its way to Lake Michigan. 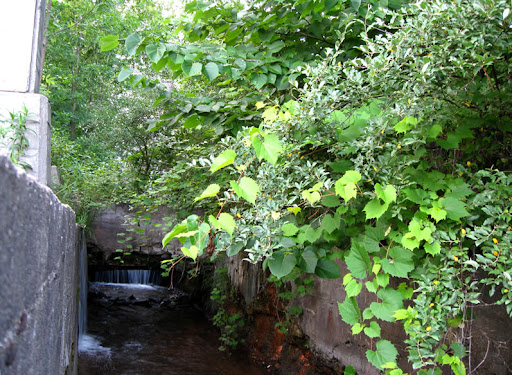 I hiked north on the highway up to the actual Penoyer Creek crossing, to see if I could get down and hike along the Muskegon River: 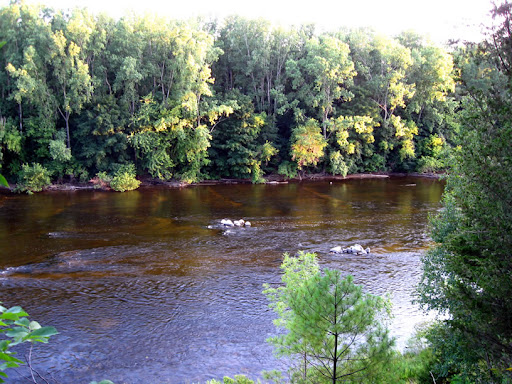 I kept walking over the M-37 bridge and looked down to see another old reservoir house of some kind by the train tracks, not visible to motorists on the bridge. Was this part of the old Penoyer Mill? 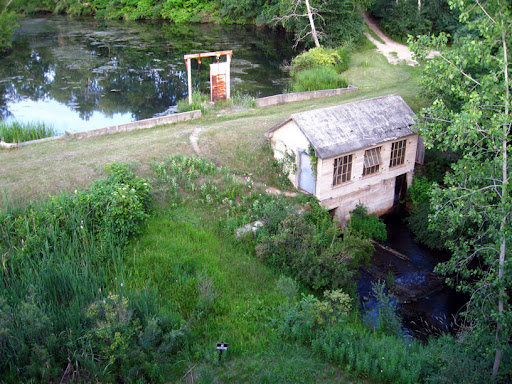 In recent years I learned of another question mark in this area that has me curious to go back for a second look—another ruin along the creek. Was that yet another older dam or mill site?

Regardless I was very satisfied in what I had seen, and that I had stopped in Newaygo again; this far surpassed my expectations for a site that I knew almost nothing about—essentially a ghost footnote in my studies of Michigan’s past…of the type that usually end up in an empty field or fruitless day of bushwhacking and endless exhausting hiking without aim. It took me five years to figure out what exactly what these ruins used to be, but sometimes that is the name of the game. Ironically, the online photos of the October Project that led me to the answer were posted merely one month after my visit to the ruins. It was just a matter of figuring out the right search terms to key in. 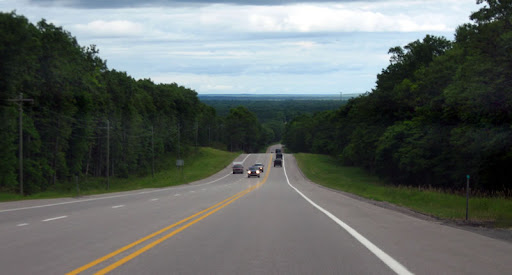