In April of 2006, Chisel and I peeked briefly into the former Garfield Manor, an apartment building at 71 Garfield Street. Because there were some sketchy doings afoot in and around the front of the structure we snapped a few hasty pictures and went on our way. 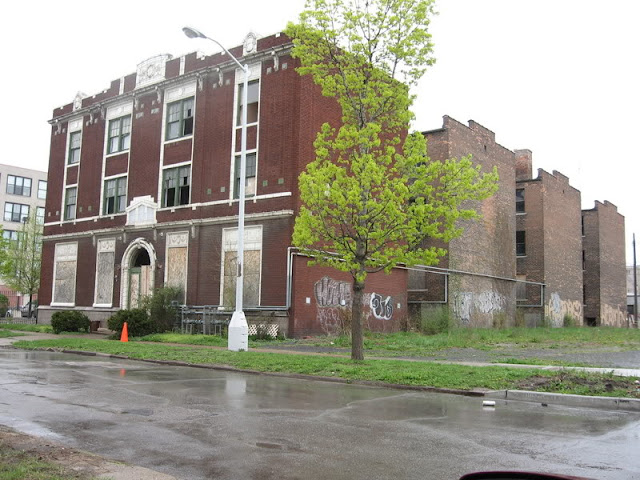 Garfield Manor was built in 1922, and its renovation was completed in 2010. 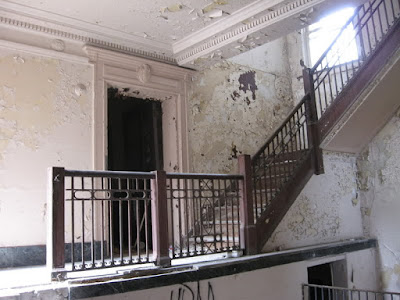 Even though I only have a grand total of four photos of the joint, in light of the fact that they show it in a pre-renovation condition, and in light of the fact that I will probably never have another use for these photos, I guess it's worthwhile to post up this very short entry. Maybe the people who live there now will appreciate seeing how much was done to bring this place back to life. 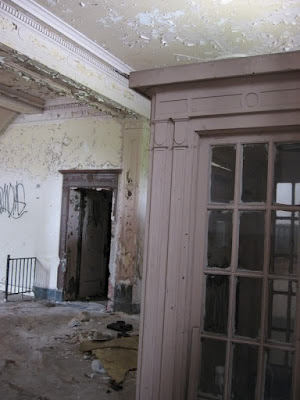 Apparently this street, as well as East Canfield and East Forest, are part of what is considered the "Sugar Hill Arts District," which is listed in the National Historic Register. I honestly had to look it up because I assumed that since there is no actual hill that it was something that some developer or some hipsters made up after the building was renovated in order to make the area seem more savvy.

But according to what little I could find with a brief internet search, it dates back to the 1940s when downtown was undergoing a lot of change and residents began moving up Woodward. It also includes the only building along Woodward that was not affected by the "Widening of Woodward" around 1936—the Edwin S. George Building—the rear of which is visible in my first photo. Unlike any other building, Woodward Avenue actually curves around it.

From what I've heard, the planning commission for the widening of Woodward Avenue was headquartered in that building, and in order to keep from being disrupted by the reconstruction work they had the road built around the building instead of moving it like all the rest. Why they couldn't have just chosen a building on a different street that wouldn't be disrupted by the project is anyone's guess, so it sounds like an urban legend to me, but nonetheless Woodward Avenue does curve around it. This guy offers a slightly better explanation, though it doesn't explain why the shift was done at Garfield Street. 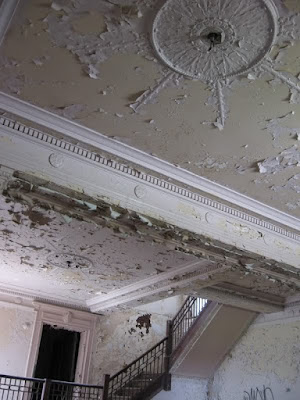 One thing I can definitely say is that in April of 2006 when I took these photos, there wasn't a hell of a lot in the way of hope or optimism of any kind of revival for Detroit like there is now in April 2014. The former Hotel Melrose about a block to the south has likewise shared a similar revival.

...Unfortunately, the York Apartments directly across the street from Garfield Manor did not fair as well, and was demolished after being set on fire several times.