'Til I Reach the Highest Ground

On the east side of Woodward at Rosedale Street, there used to stand the Rosedale Theater: 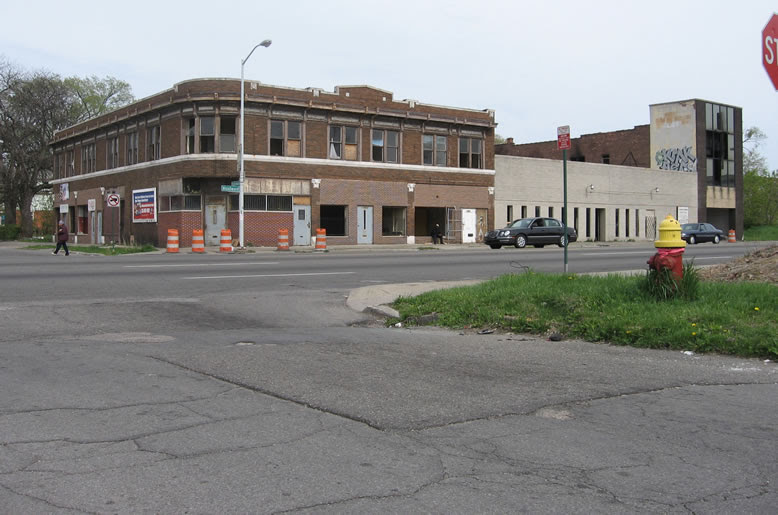 The old address was 11520 Woodward Avenue. According to WaterWinterWonderland, it opened in 1915 and closed in 1954. One former patron who lived in the neighborhood recalled that the Rosedale used to host a pie-eating contest during intermission on Saturdays. Usually the Saturday programming was geared toward kids and tickets costed 12 cents. On Sundays, the movies would change up and the tickets were 14 cents. 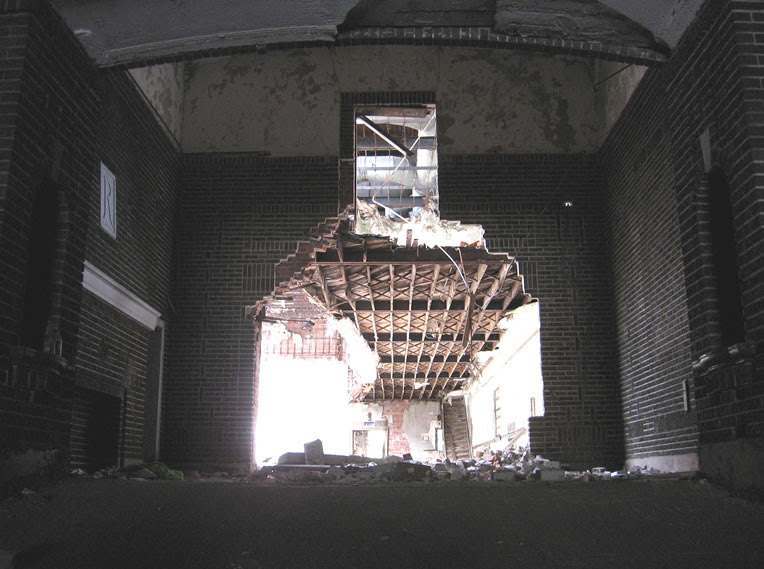 According to cinematreasures.org, the Rosedale was designed by Detroit architect William Buck Stratton. He also designed the Jewel Theater on Gratiot Avenue. Stratton is better known for his work on Pewabic Pottery, the Women's City Club Building, Brodhead Naval Armory, and the Scarab Club.

I assume this "R" on the fireplace stands for Rosedale: 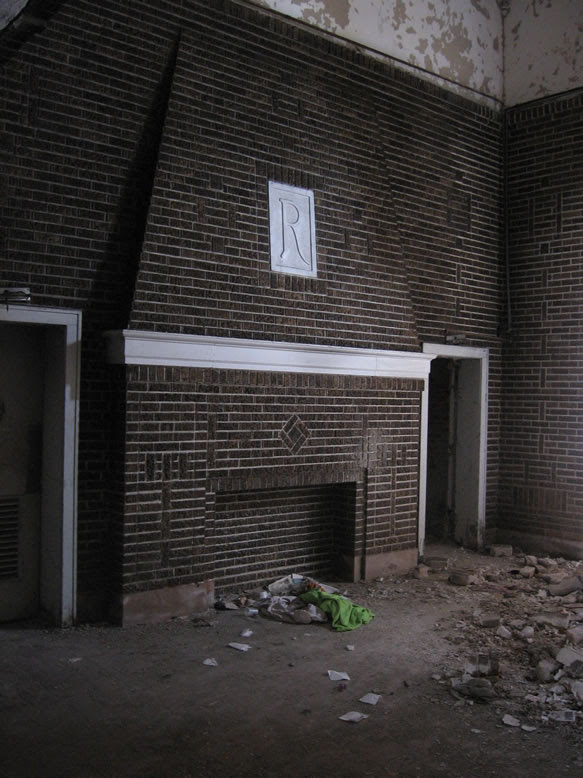 The Rosedale Theater had a Velvet Gold Fibre Screen installed, according to the 1917 Michigan Theater Review. This invention was marketed by one L.J. Gardiner of the United Theater Equipment Co. of Detroit. According to its advertisements, the Velvet Gold Fibre Screen would save the proprietor of such an establishment up to a mind-boggling $5 on his electric bill every month. It was also claimed to have been more durable and longer lasting than any other screen.

UTE's full-page ad went on to boast that six of the major downtown Detroit movie houses at that time were using his screens (Majestic, Madison, Washington, Adams, Broadway-Strand and Drury Lane), as well as New York City's most fabulous palaces, the Rivoli and Rialto Theaters. Other blurbs in the Michigan Theater Review mentioned many other theaters across Michigan that had Velvet Golds installed. 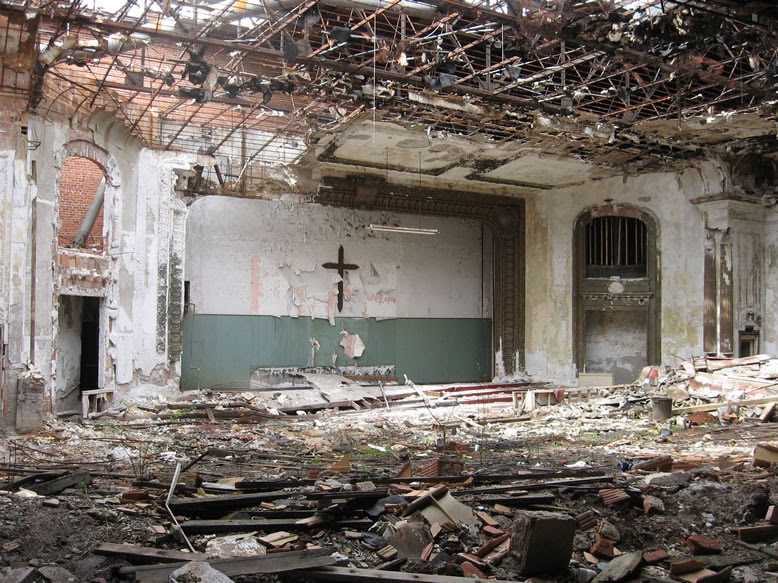 The defunct Rosedale was bought in 1955 by Pastor Bishop C. L. Morton, Sr., whose congregation, Greater Mount Zion Church of God in Christ, held church there until the 1970s.

Here's another "R" on the centerpiece of the proscenium...what do you suppose it stands for, rubble? 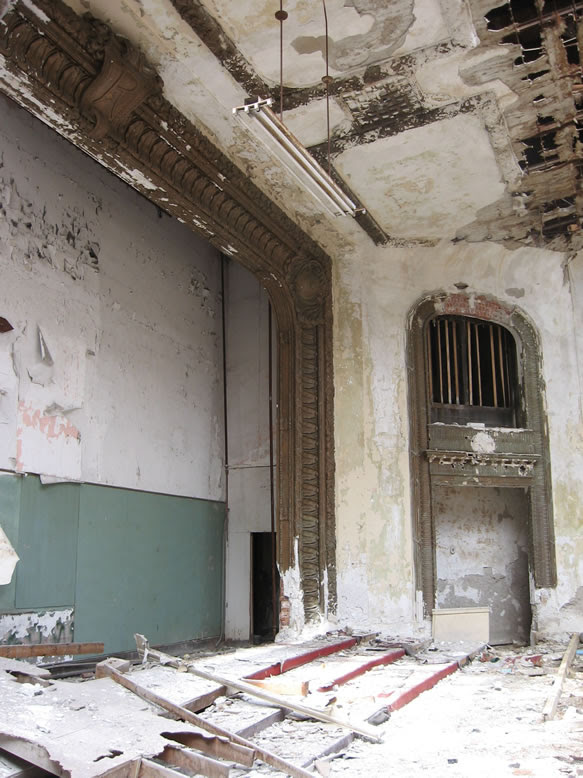 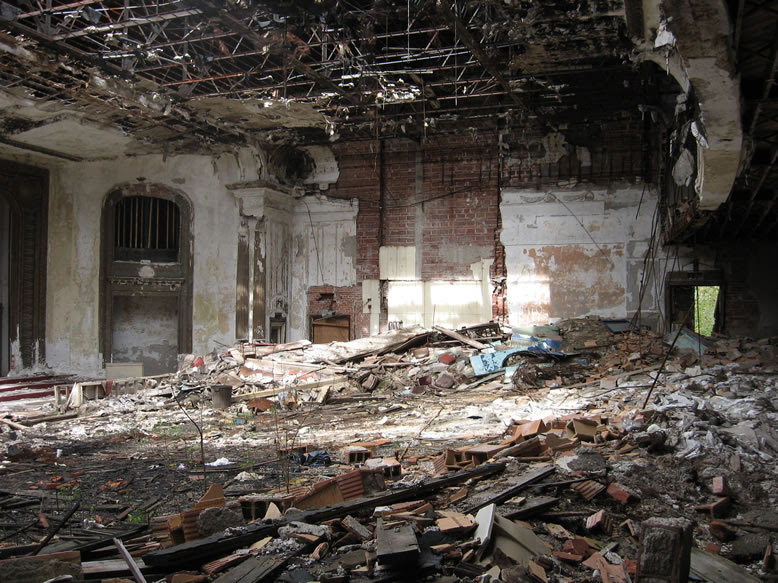 From the photos at the cinematreasures link, it seems as though some of the ornamental plaster work was thankfully salvaged before the place was demolished. 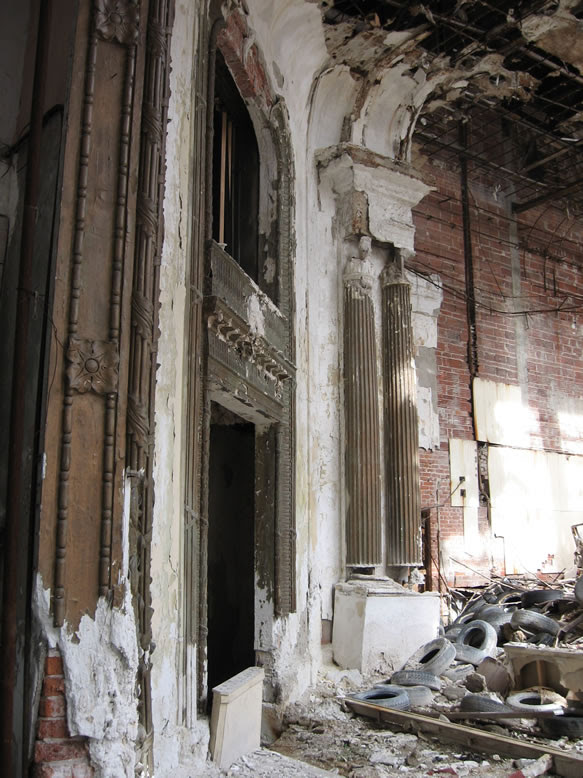 There wasn't much left of the place. A Kimball 2/12 theater organ was supposedly original to the building, but was not still there as far as I could tell. 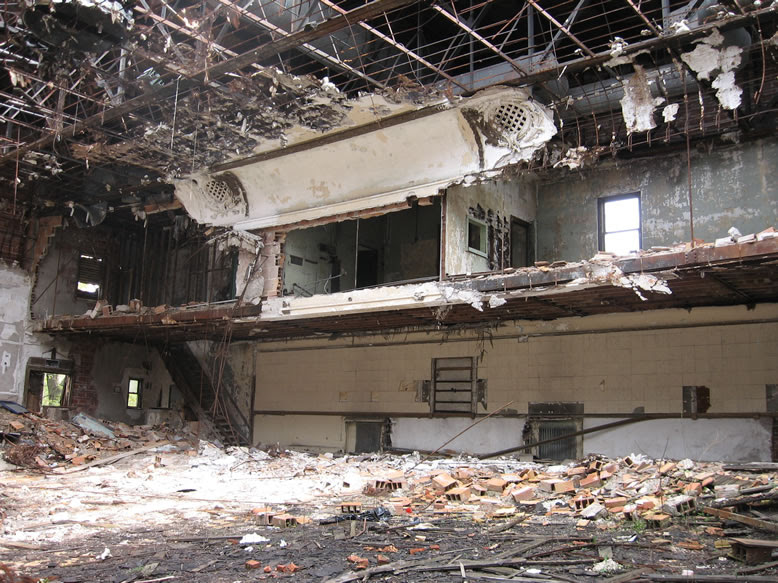 Out back between the two buildings, it was a jungle: 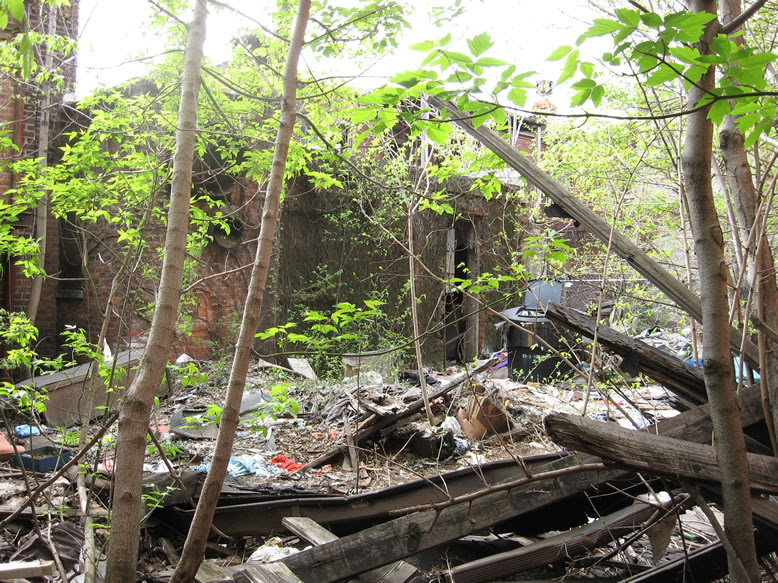 We then stumbled into the other church that occupied this block, Higher Ground Ministries: 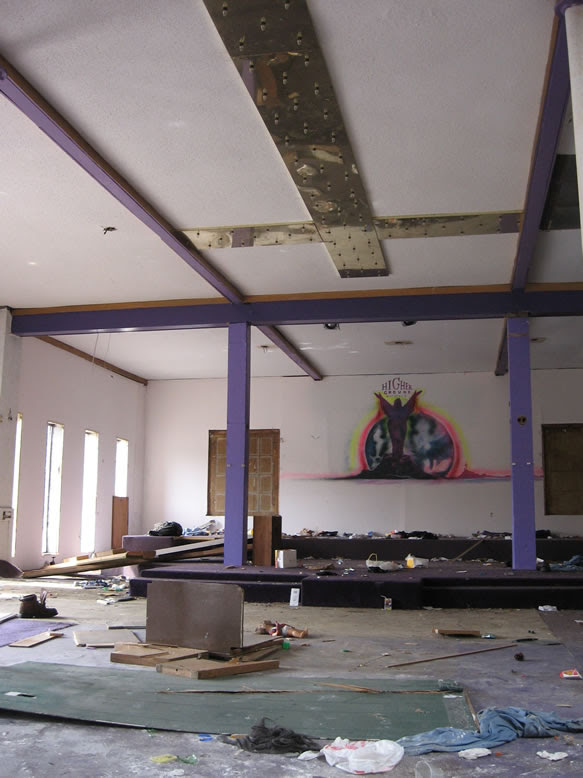 Keeping the Stevie Wonder song out of my head now was an impossibility. I think this website might be the same church: http://www.hgmfc.org/content/history/, and there is also another Higher Ground Ministries operating down in River Rouge. Interestingly, Higher Ground also seems to have launched a landscaping business, giving jobs to hard-to-employ men in the city: http://www.higherground-landscaping.com

The older building on the north corner of the block was last used as apartments, it seemed, but it looked like a mass eviction had taken place at some point in the recent past. 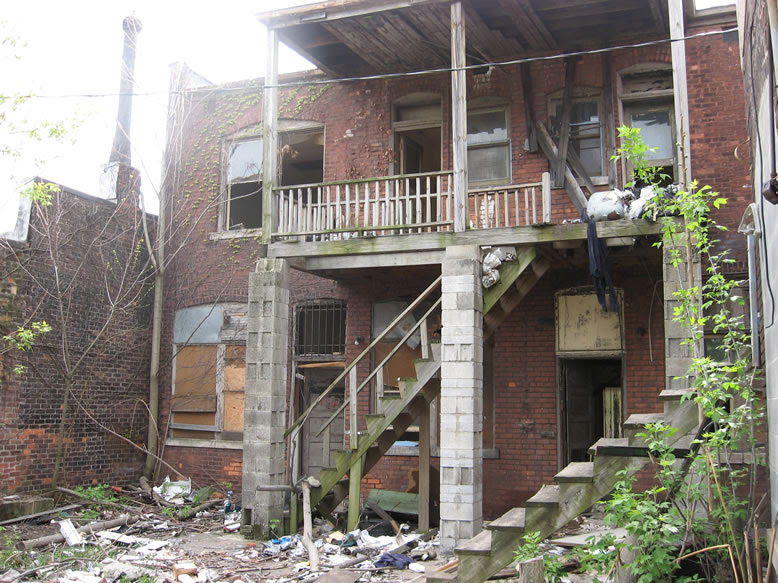 At a back door that lead to the basement, we figured out what the loud sound of rushing water was that we had been hearing for the past 20 minutes... 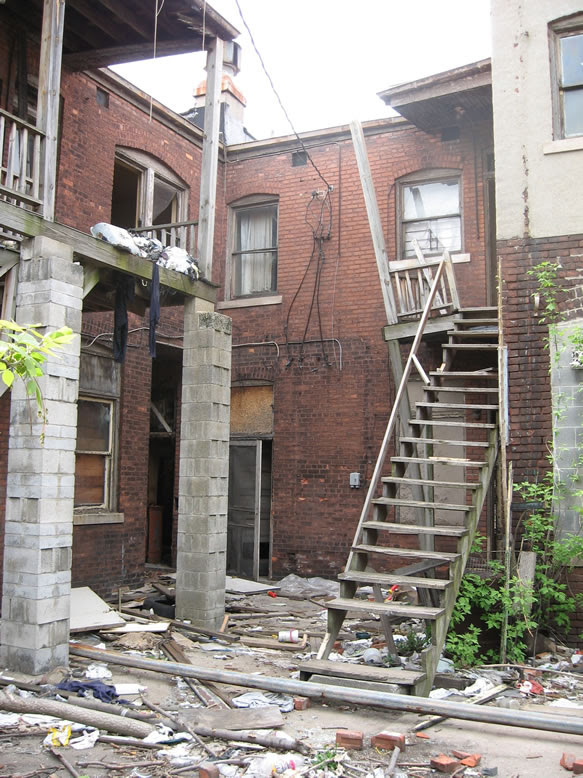 ...We looked down the stairs into the dark and could see a raging river coursing past the bottom of the steps! The strong odor of chlorinated water emanated up from below as well, smelling like a mall fountain. 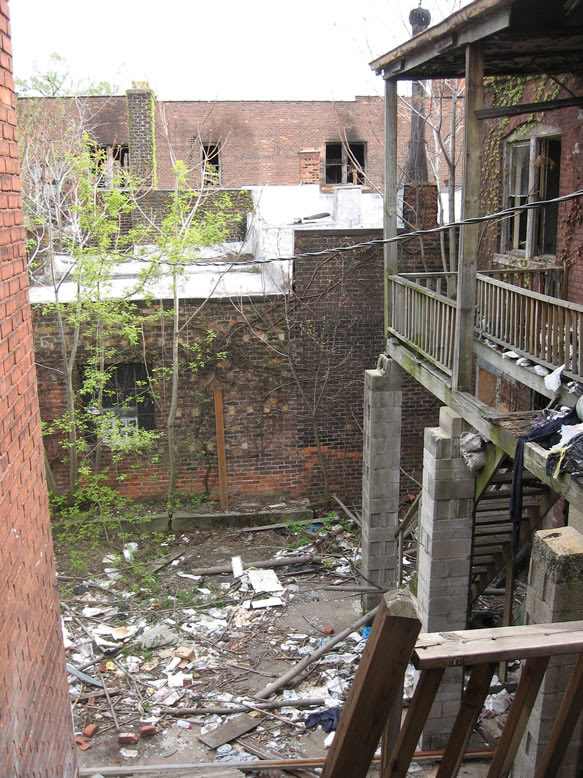 The Rosedale Theater, and Higher Ground Ministries were demolished in June of 2007. Today the lot is still vacant, seven years later.