As you can see, both myself, and the city of Detroit itself have a "thing" for the tall skinny abandoned buildings. The Vinton Building at 600 Woodward Avenue is such a tall, skinny building--and as such, almost all my photos of it are tall and skinny. 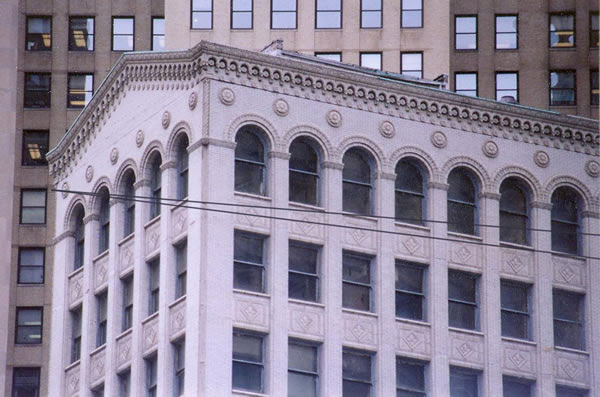 I find them aesthetically appealing, probably because of their novel shape, in this era of sprawling single-story crapboxes that are being built almost exclusively today. And of course, it was designed by everyone's favorite architect, Uncle Albert Kahn.

Its white-glazed brick style closely follows in the pattern of his earlier Kales Building, which according to W. Hawkins Ferry's book The Legacy of Albert Kahn, was an influence of the Daniel Burnham tradition that was then in vogue. The American Institute of Architects Guide to Detroit Architecture states that the Vinton Building was completed in 1917 for the Vinton Construction Co., with a bank on the first floor, and that not only is the Burnham influence evident, but also Arts & Crafts, Prairie, and industrial influences "merge here in a solution that is uniquely Kahn." 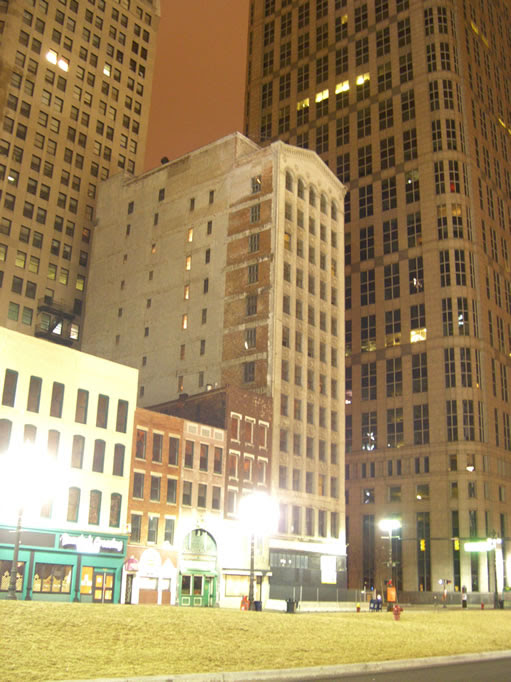 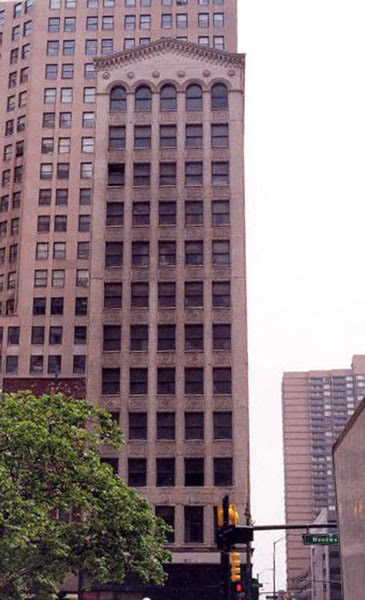 One fairly warm spring night, Chad and I were riding back from somewhere along East Jefferson as a serious storm was brewing. It was the first electrical storm of the year, and we decided to stop and check on the Vinton. Just as we got downtown it began downpouring rain in buckets. The dark, empty city streets intermittently illuminated by the sudden flash of lightning made for quite the atmosphere as we moved quickly to the rear alley of the building, where behind a large dumpster we found there to be a hole in the ground with light emanating up from the building's basement.

We could not have asked for a better moment or better cover. We quickly lowered ourselves into the jagged crevasse onto a ladder of dirty pipes and conduits, amongst the alley refuse and other unmentionably filthy residues that collect in alleys and wash off in sudden rainstorms. The smells of the alley juices were enhanced by the fact that they were now trickling between our climbing fingers and funneling down onto our heads in little rivulets as we worked our way lower into the narrow gap to find ourselves in the meter room of the basement.

It wasn't long before we cautiously crept our way upstairs to stand inside the narrow, mostly-stripped lobby of the Vinton Building: 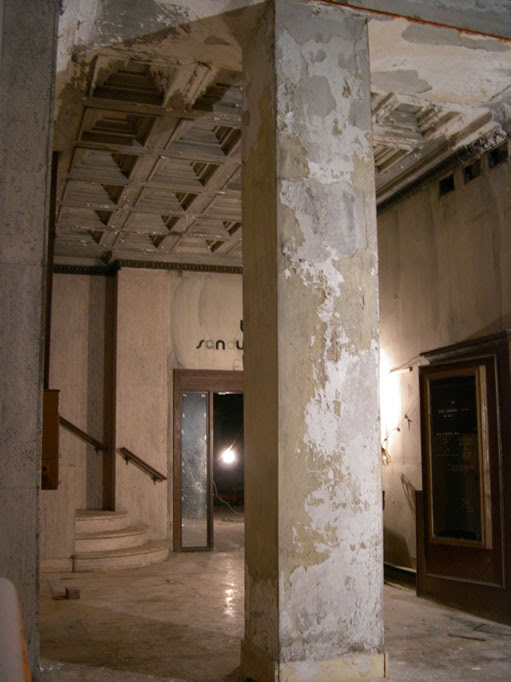 Power was of course back on (or still on) to the building, at least temporarily, which made for better photo-taking conditions, if adding to the nervousness of sneaking around a building that could potentially be alarmed. We saw no signs of an alarm yet, though. 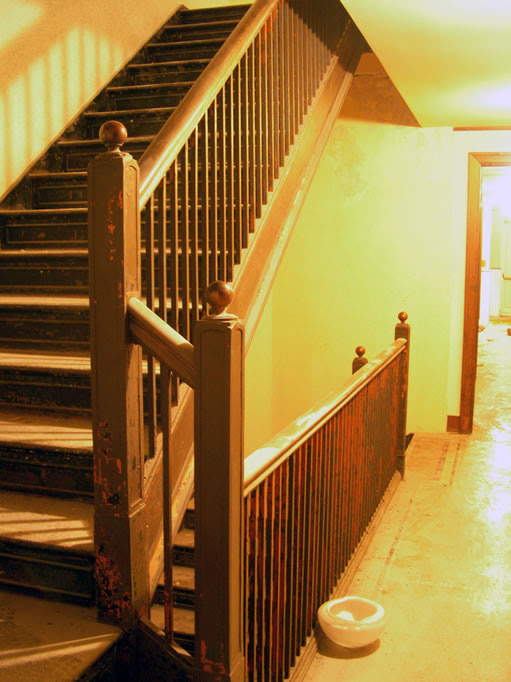 We found most of the building's floors to be cleaned out, so we moved quickly to the top floor and the roof. It was the fancy arched windows of the 12th floor that I really wanted to see.

A rainy view down Congress...unfortunately very few of the building's windows could be opened: 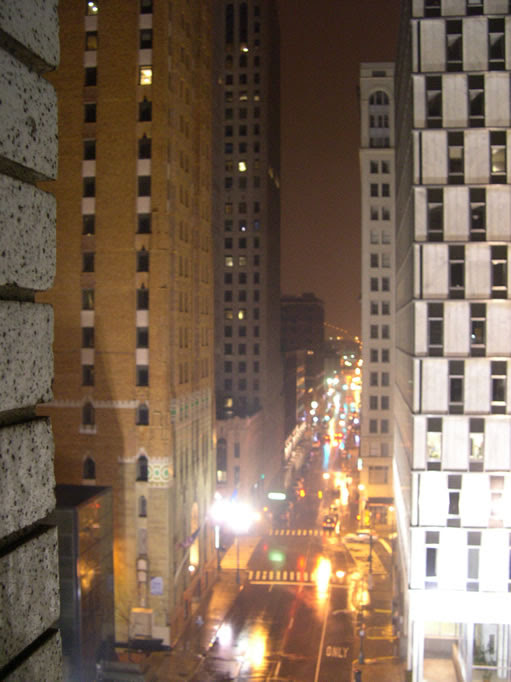 The Vinton Family name is one of the more prominent in Detroit's history. According to The City of Detroit, Michigan, 1701-1922, Volume 4, by Clarence Monroe Burton, G. Jay Vinton was one of the more memorable businessmen and financiers of "old Detroit" who was in large part one of those who helped build it into a modern metropolis. His Vinton Company was "one of the strongest concerns in Detroit," and at the time of Burton's writing was the oldest contracting company in the city, whose carpentry work was "greater...than any other company in the city." It was founded in 1858 by G. Jay's father, Warren G. Vinton, who I believe made his money in the lumber business as well as carpentry. 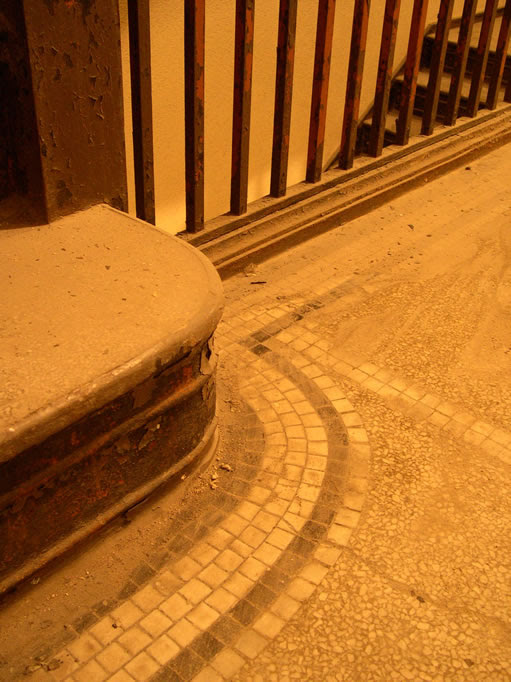 After 1895 the Vinton Co. expanded their business to include not only carpentry but steel, brick, stone, and cement construction, and eventually employed over 1,500 men. 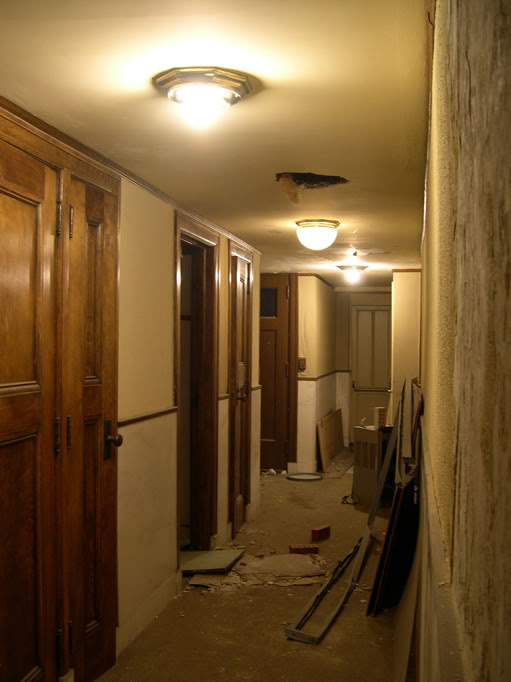 To list the Vinton Co.'s accomplished contracts on Detroit buildings would be to attempt a Homerian catalogue of ships, but I shall name some of the more important ones that Burton has included: the Masonic Temple (old), Michigan Central Depot, the YMCA, Detroit Athletic Club, Detroit Boat Club, Detroit Opera House, St. Paul's Episcopal Cathedral, several of Detroit's "finer school buildings," the Fine Arts Building, Free Press Building, Grinnell Building, Belle Isle Aquarium, the Lenox, the Charlevoix, Detroit Stove Works, the Packard Motors Plant (as well as those of Hudson, Chalmers, Hupp, and others), Detroit City Hall, the Wayne County Building. I would also have to imagine that they did the construction of their own new headquarters building here as well.

Rain-slicked architecture, viewed by carefully hanging over the buildings cornice with my camera held out in one arm, while trying to keep it from being inundated with water: 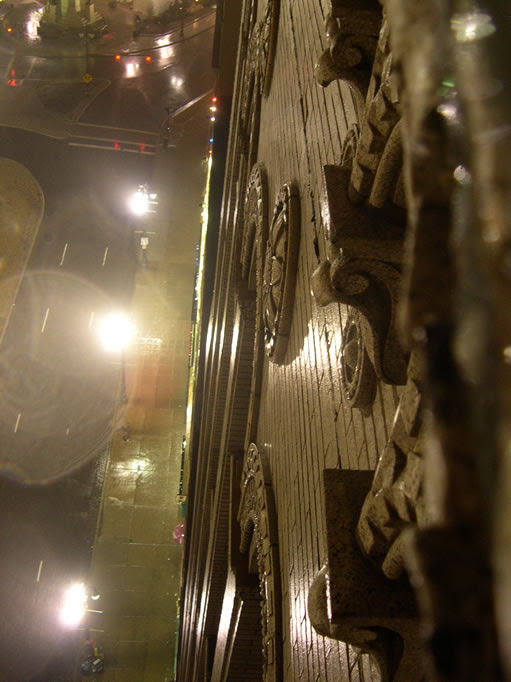 The building is listed in the National Historic Register, and there were plans announced in 2005 to renovate the building, but as usual they seemed to languish indefinitely once the initial clean-out occurred. Only as of 2013 has the building seen any further development, when it was purchased by Dan Gilbert, though it has yet to reopen. 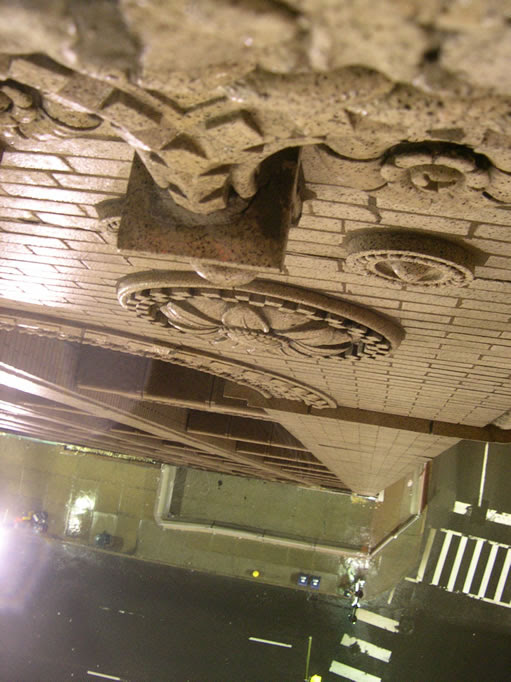 Dizzy yet? It's kind of hard to compose these shots well. 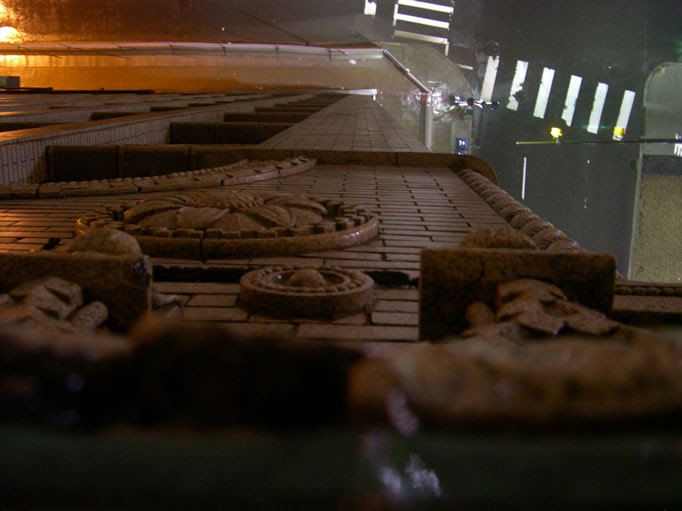 Now this has to be my favorite one: 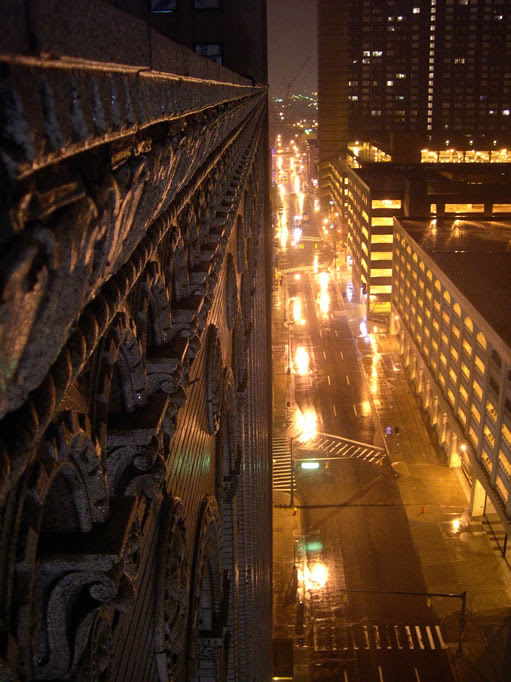 Chad, bravely huddling in the rain to get his roof photos...notice the old "Bank 1" sign: 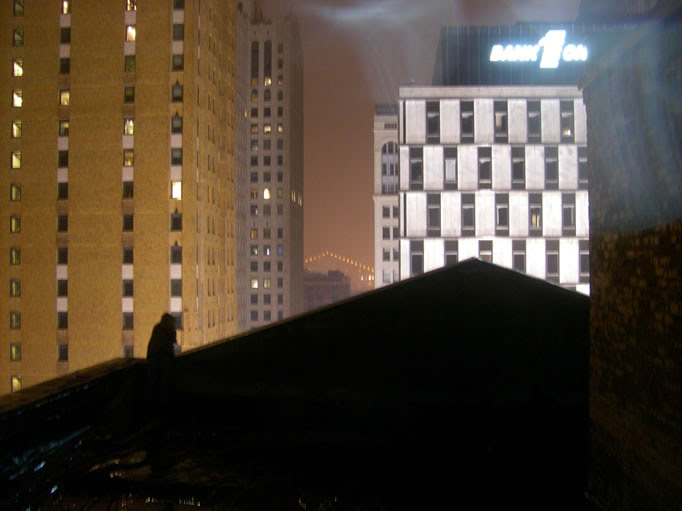 The RenCen, casting its Barad-Dûr-esque beams of light through the rain: 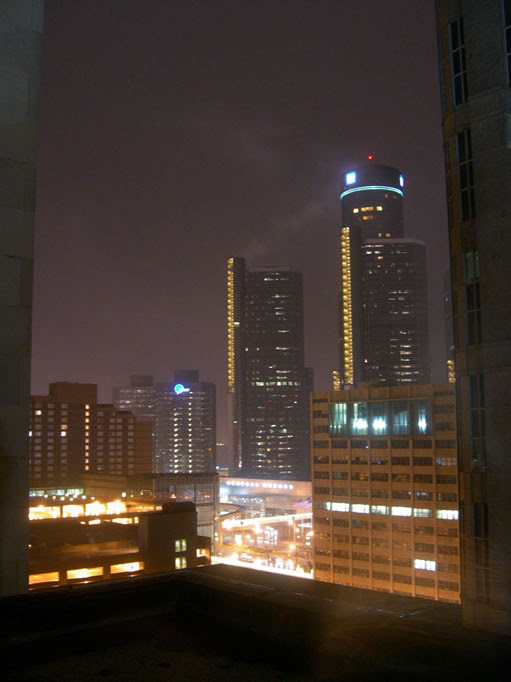 I didn't get many more photos that night simply because I didn't want to risk filling my camera any more full of water. I did return the very next night, as I recall, with Detroitblog John, who had also been eyeing the building for a long time. He noted in his writeup for the Vinton that it had been constructed on the site of what had been a T.B. Rayl store since 1876.

As it turns out he is the one standing in the middle of my next shot...I suppose I was too impatient to wait for him to move: 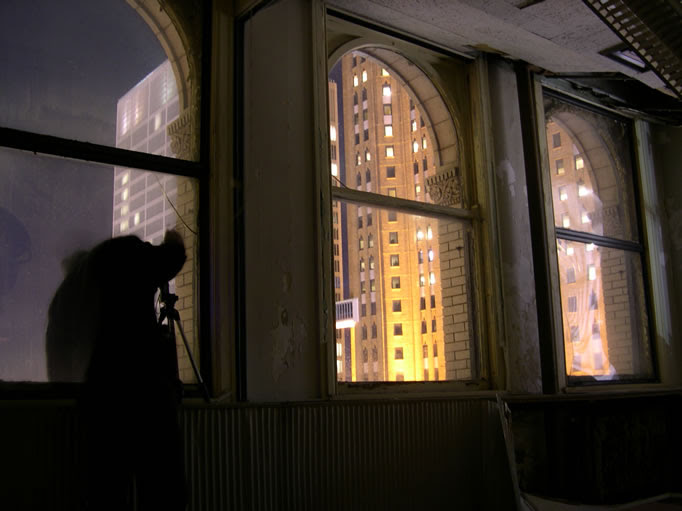 Though it was originally built as the Vinton Co. headquarters, it didn't stay that way for long. Soon, the usual insurance agents, real estate companies, and attorneys filled its offices. The Guaranty State Bank on the first floor also took over the building and (and naming rights to it) in 1922. Detroitblog noted in his March 2006 entry, aptly entitled "Identity Crisis," that the building then continued to change its name many more times through to the 1980s (at least once per decade), as different companies moved in and out. 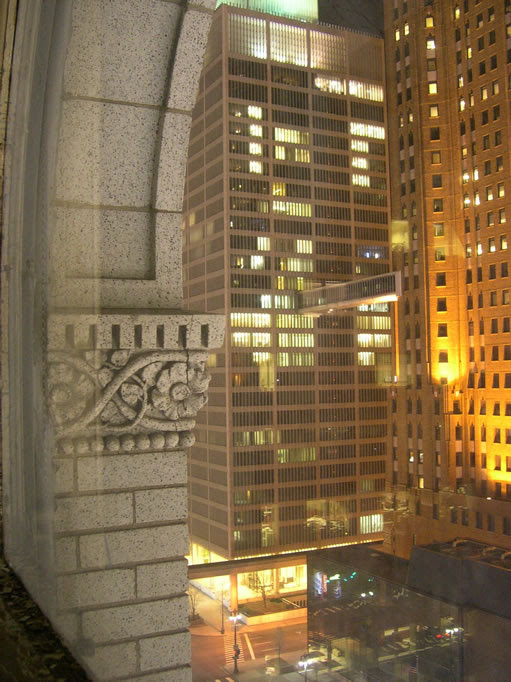 By that time most of the tenants had disappeared, slowly closing down one floor at a time, until--as usual--only a restaurant or similar small business occupied the ground-level storefront. The 1990s were a litany of lawsuits regarding unpaid taxes and questions of ownership while the structure remained empty and decaying.

View toward the Detroit River and Hart Plaza: 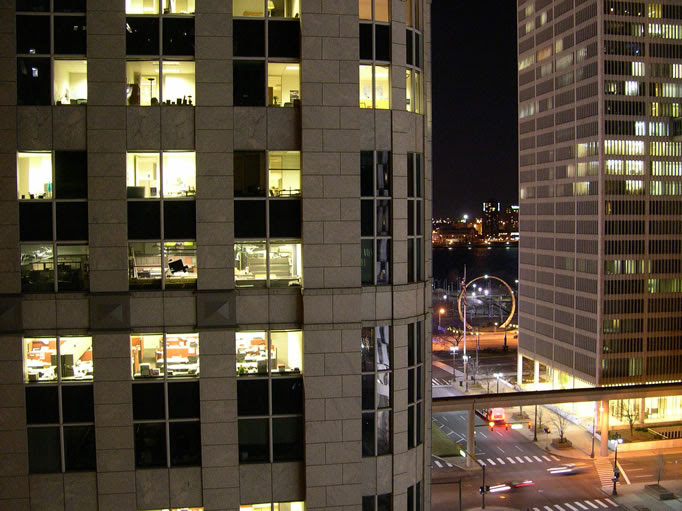 The old MichCon Building, with its strange skybridge link to the Guardian Building: 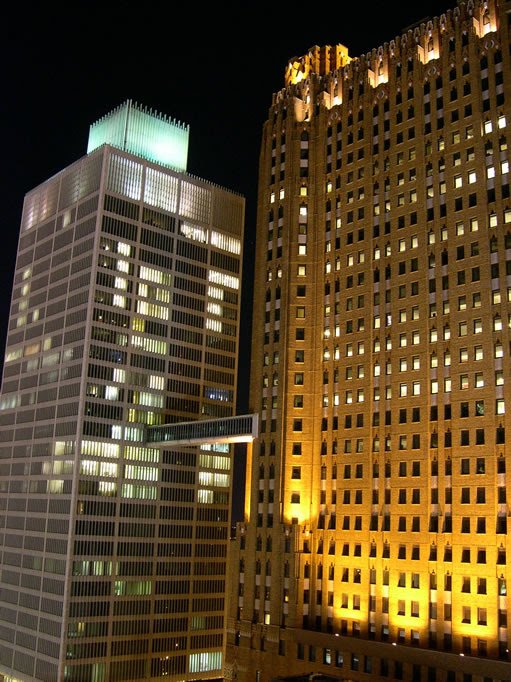 Looking straight up from one of the very rare windows in the Vinton Building that actually opened, you can see some of the dimly-lit terra cotta details of the window arches and the National Bank looming over it: 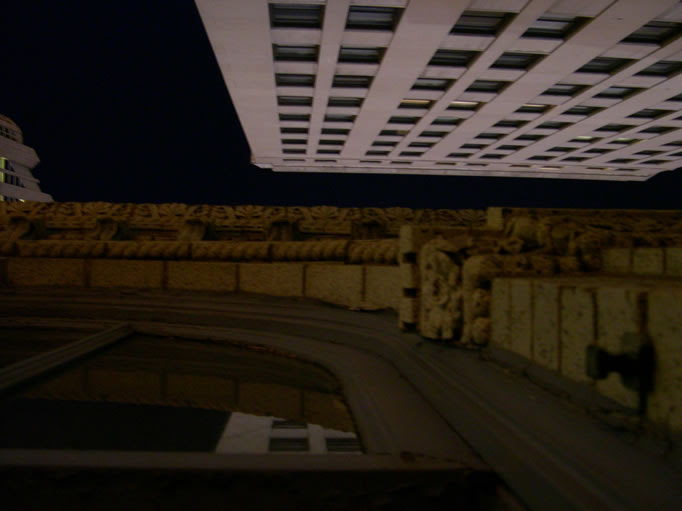 A view of the roof looking west, without a torrent of rain obscuring the view: 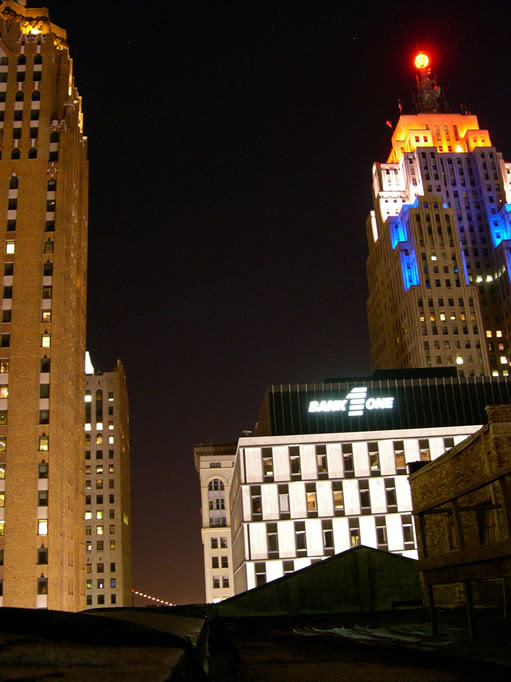 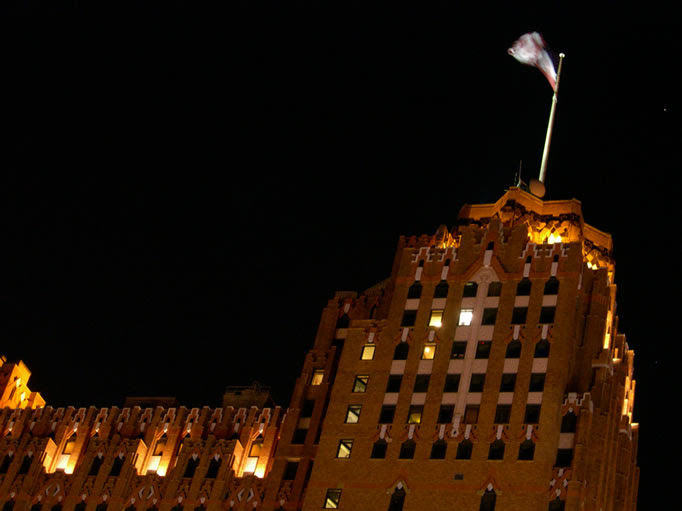 A view of Campus Martius across the front facade of the Vinton Building's uppermost reaches: 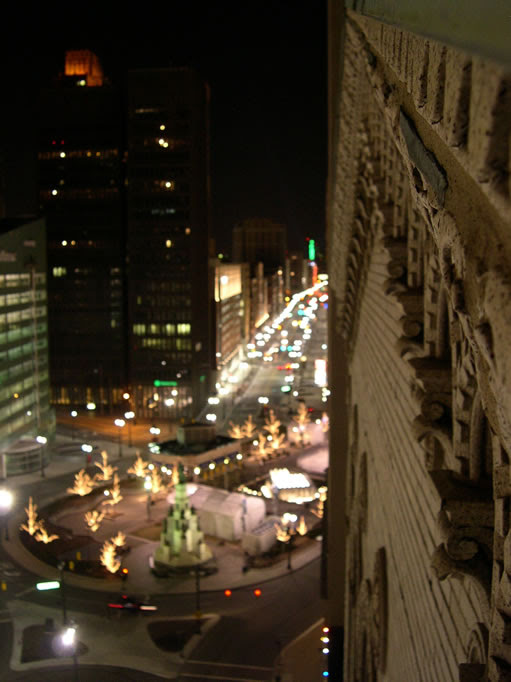 The "looking-down shot" is one of my favorites, if you hadn't noticed: 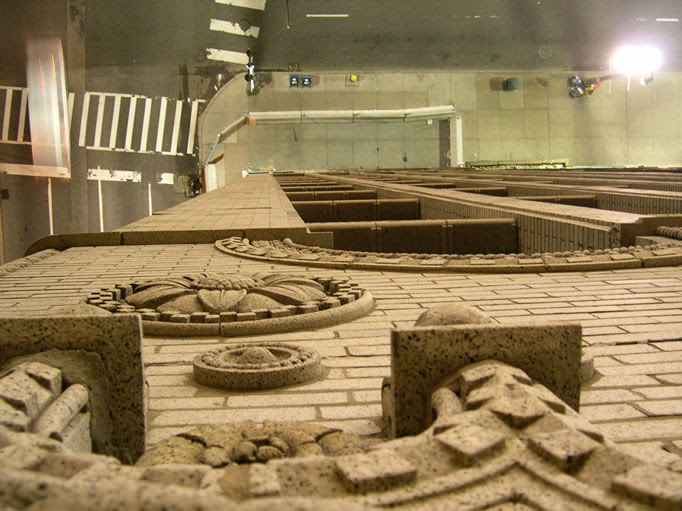 The hulking National Bank of Detroit looms over the Vinton's elevator penthouse: 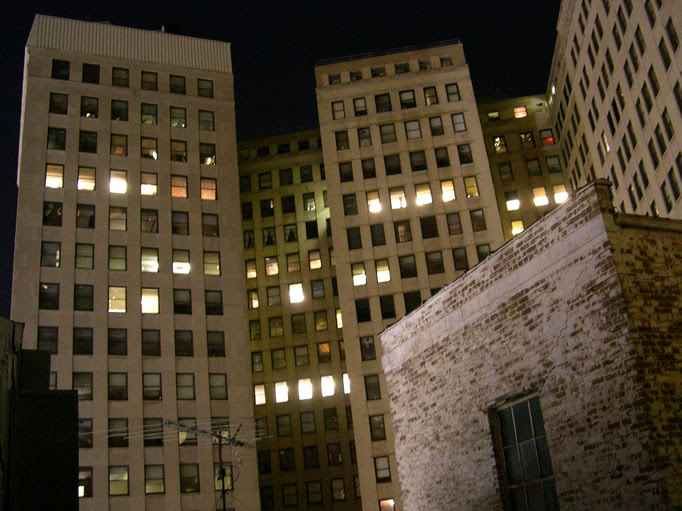 View from the fire escape on the rear of the building, hanging over the alley between the Vinton and the mammoth National Bank of Detroit Building: 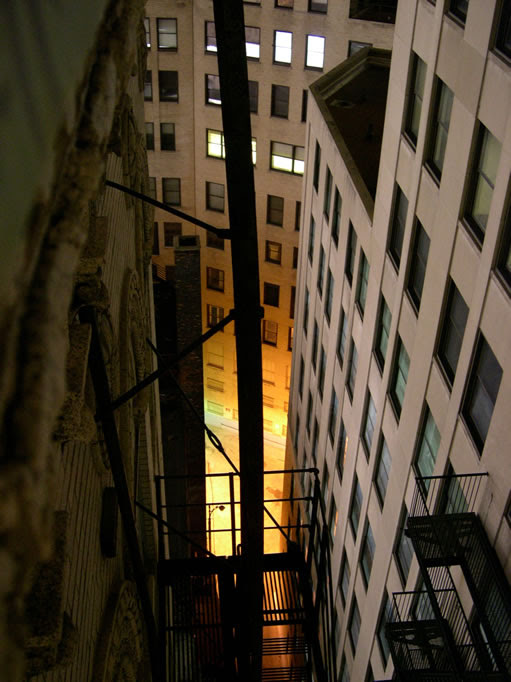 A couple days later we returned for another look during the daytime, since our way in was still exploitable. It would not remain so for very long: 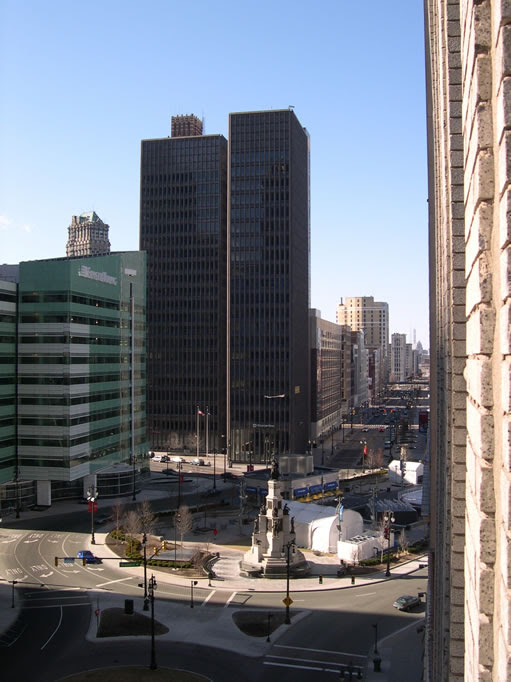 Long view up Woodward Avenue, with the Fisher Building in the distance: 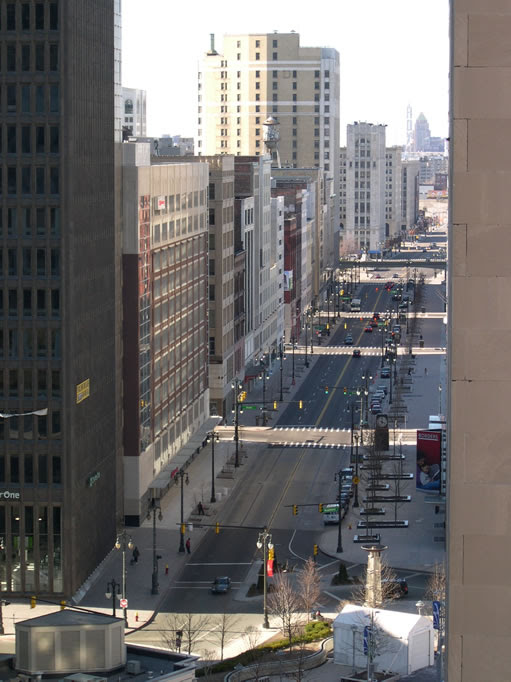 View down Woodward to Hart Plaza, with a tugboat on the Detroit River: 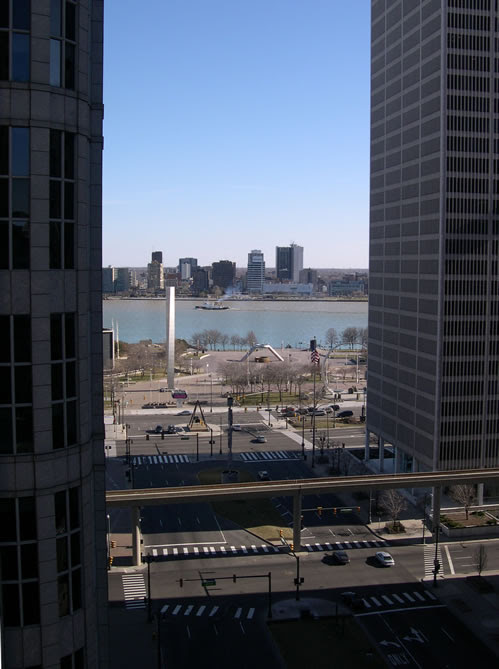