Well aware that the date of Super Bowl XL was looming, Chisel and I stepped up our game in 2005 to get to as many of the at-risk-of-demolition structures as possible. One of the ones you may not remember was the William Apartments, across from the Masonic Temple and the Hotel American (Fort Wayne): 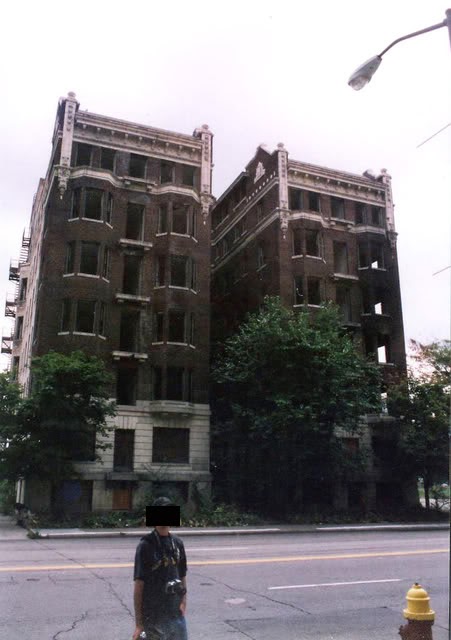 Again, these shots were scanned from 35mm film using c.2005 technology...and you'll find that my camera had a helluva light leak. 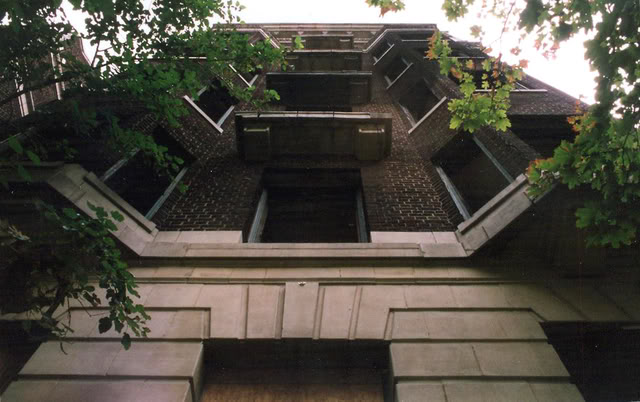 If you did happen to hear about the William, it was probably because of the sudden fire that occurred on the upper floors before it was swiftly torn down. Big coincidence, huh? Masonic conspiracy, perhaps? Heh...I'm not sure, since there wasn't much going on that far uptown during the Super Bowl.

Another factor is that all the attention was focused on the much more contentious Madison-Lenox and Donovan Building demolitions, while lesser-known landmarks such as the William simply went gently into that good night without a fight. There also used to be another abandoned apartment building named the Westchester adjacent to the William, but it too was demolished. 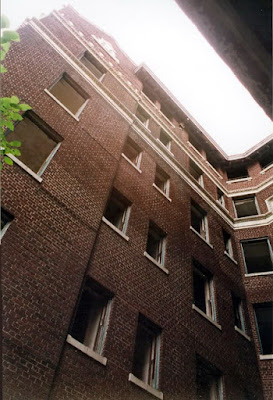 We talked to a guy in the lobby here who had lived at the Eddystone until recently, and he told us that when the dead hooker's body was found there and the place got bricked up, this building was where a lot of the residents moved to.

He warned us to be careful if we ventured to the lower floor, because there was an old man who lived there in the darkness from the completely-boarded up windows of that wing of the building, who was extremely ill-tempered, and known to attack people in the dark. Chisel and I each raised an eyebrow; that was the exact part of the building we had entered through. 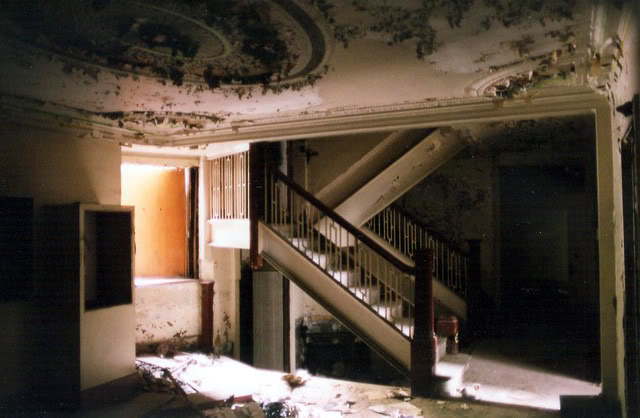 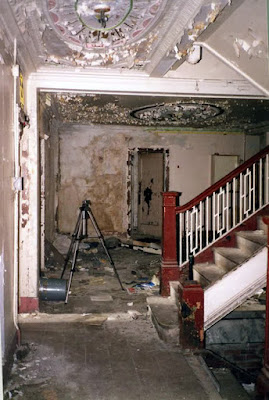 Here, if you click on the next photo below and look close, you can see an escutcheon just below the fancy center window with a big letter "W" on it: 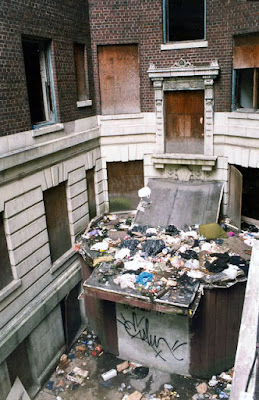 I would assume that stands for "William." 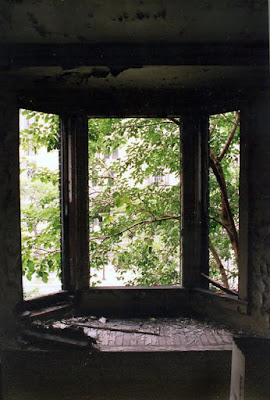 Built in 1917, the William also bore the names Prince Rupert Apartments, Temple Court Apartments, Pringle Hall, Almeda Apartment Hotel, and Temple Towers at different times, according to Detroitblog's 2004 writeup. Its address was 439 Temple Avenue and it was designed by architect Joseph P. Jogerst, who also designed the Belle Theater, and the Stratford Theater on the city's west side. 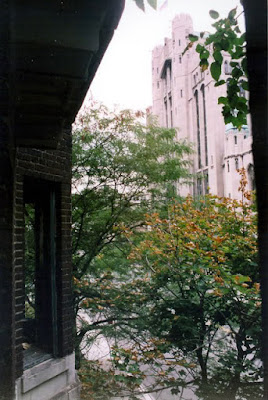 After a stint as government-subsidized housing, it closed in the early 1990s and promptly became a squat palace. In 1998 the city tried to sell the building for a token price to the Cass Corridor Neighborhood Development Corp., who planned to turn it into an AIDS victims' shelter, but this fell through. 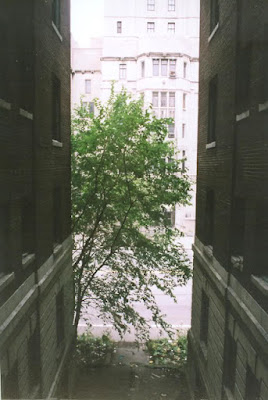 "This proposal," as only Detroitblog can express so eloquently, "went over like a lead balloon at the Masonic Temple, whose management envisioned the place as a launching pad from which a gaunt army of diseased derelicts could prey on the well-to-do, older suburbanites who frequent Masonic Temple shows." 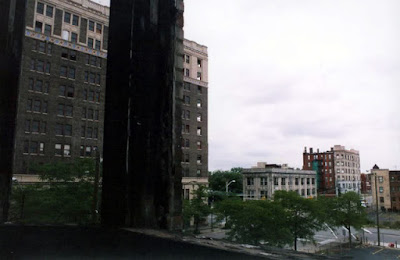 It was so bad, that the Shriners (who accounted for a third of the temple's income) threatened to break ties with the temple if the shelter deal was allowed to go through—which would have surely resulted in the closing of Masonic Temple. As a result the HUD withdrew support, the plan fell apart, and the shelter never materialized. 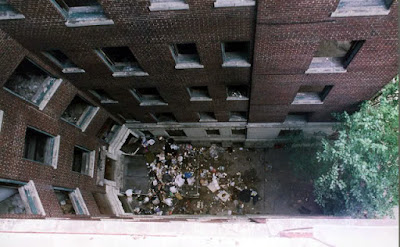 Instead of becoming an AIDS shelter, the building continued to sit vacant infested with squatters, and began a downward slide into decrepitude. I guess the Shriners sure showed us, huh? 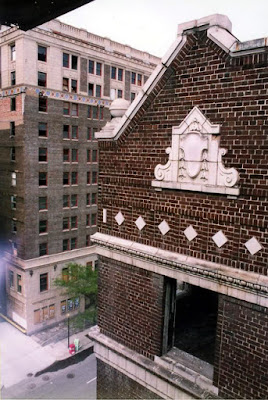 I can only hope that current leadership within the Shiner organization, and Masonic Temple is more enlightened these days. 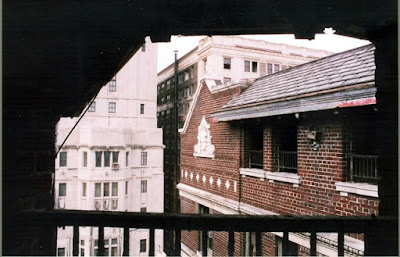 There was a nifty roof terrace, or whatever you want to call it, wrapping around the entire horseshoe-shaped courtyard of the building at the top level: 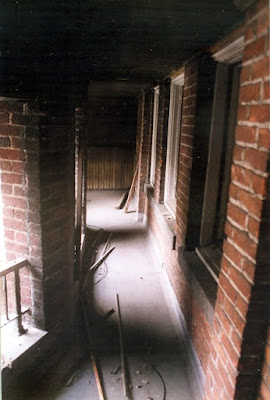 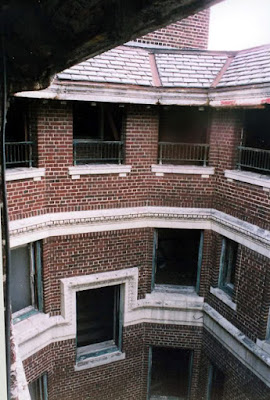 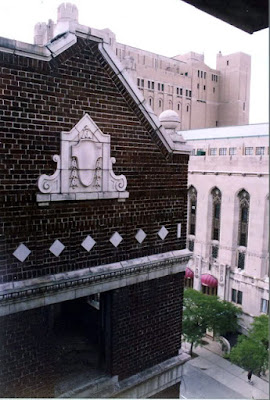 The roof here actually seemed to be in fairly decent shape. Here is a great view of the Masonic Temple towering nearby...I explored it in a very detailed older post: 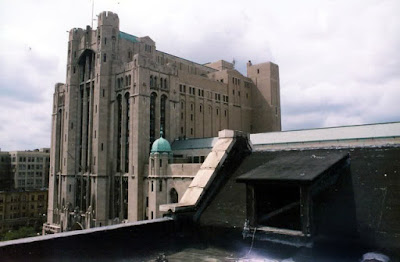 The similarly abandoned Hotel American (Fort Wayne), across the street: 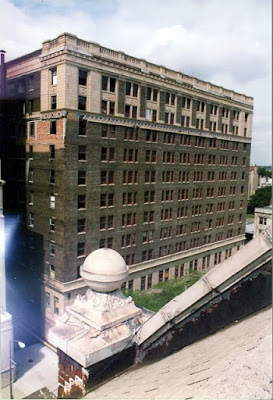 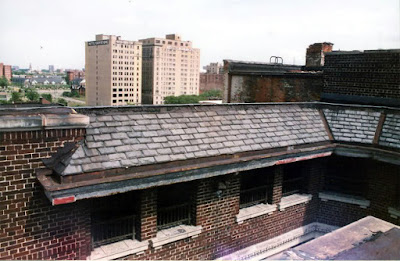 Before it was demolished in 2006 the William was completely surrounded in a vast parking lot, owned by the Ilitch family. The parcel where this building used to stand has since been absorbed into the Ilitch parking lot empire. However, according to the "Terrible Ilitches" social media watchdog, city records still show it as being owned by the City of Detroit.... 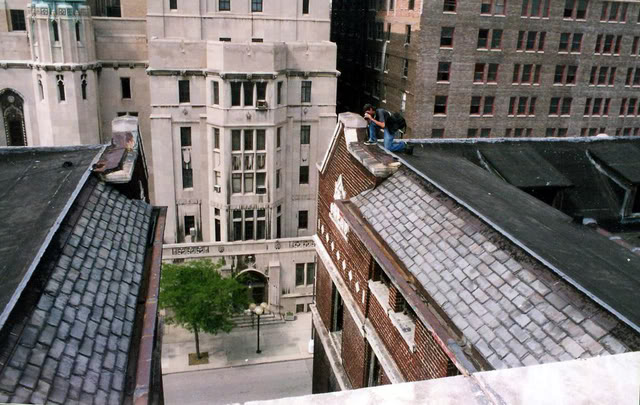 The property had been owned by the Detroit Housing Commission since 1968, and on October 24, 2017 a resolution introduced by City Councilman Gabe Leland was passed to transfer it to the Planning and Development Department. Shortly afterward, the property was paved over and fenced into the surrounding Ilitch-owned parking area, although there is no further record of any sale or lease of the property. So either the Ilitches are illegally usurping taxpayer-owned public land for profit, or someone in city government gave it to the Ilitches in exchange for some under-the-table favor? 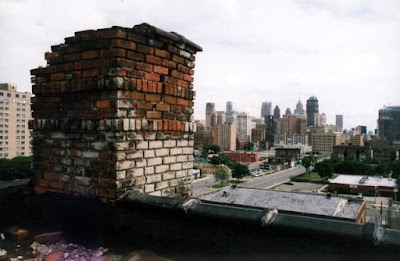