No More Trucking for Pontiac West

In February of 2008, I received word that the old GM Truck & Bus plant (aka, Pontiac Assembly West, aka, TPC Validation Center) had been totally shut down and vacated, and that the only other person there was a guard who said the plant would be transferred to a demolition company later that month. He also said that GM would cease guarding the grounds until then.

This of course set off alarm bells in my head and plans were made immediately to take advantage of this window of opportunity. At the time the bay doors of the plant were wide open, and only the fence acted as a barrier against trespass in this time of high scrap metal prices and legendary, Robin Hood-esque copper thievery.

Knowing that we had a mere window of about one week to explore this place before the demolition company put guards in place, my colleague Sloop enlisted my aid for a 6.5-hour mission of documentation and petty larceny.

Because once again GM had moved out, leaving everything behind, to what had to amount to millions if not billions of dollars in equity in materiel alone. Perhaps a sale had been conducted, or was about to be conducted, but almost everything still remained in place at the time we visited.

It was bitter #$%&@ing cold out, but we had no choice but to dress warm and brave the elements. Once inside, we could hear a very loud, strange moaning sound from the vicinity of the bathrooms, as well as spattering water. A vast ice floe told us that the pipes had burst, and the bizarre howling sound was that of cold wind funneling through the fractured plumbing of the toilets. The temperature outside was in the single digits, but the air inside may have dipped below 0F.

Like Detroit, nearby Pontiac was clustered with GM plants, but was also the cradle of its own budding auto industry in the early 1900s, especially concerning trucks. The old Jewett Plant still stood on Telegraph Road (but is now demolished), which was a brand once part of Graham-Paige Motor Co., which built trucks back in those days. But it may be the only remnant of the numerous and now-defunct truck makers that took root in Pontiac, most of which were formerly located where the now-defunct Pontiac West Assembly plant stands. In fact, it was many of those small companies that were conglomerated by GM to form what is now known as GMC.

In 1900, Grabowski Power Wagon (eventually bought by Dodge I think) operated three truck plants on Saginaw Street near where Rapid Motors would in 1905 be manufacturing 2-cylinder trucks. It was this site that would become the Pontiac West plant you see here. Reliance Motor Truck (1904-1908) sold to Crescent Motors, then moved to Pontiac and in 1908 combined with Rapid Motors, at which time they became General Motors Truck Co. (hence Rapid Street, which forms the northern boundary of the modern-day GM plant). Yellow Cab (1928-30), first made in Chicago, moved to Pontiac and became General Motors Cab. They were made until 1938, mostly from Chevy bodies with some truck driveline, and longer chassis.

A Michigan DEQ document notes that three of the buildings that were to eventually become Pontiac West were acquired from the Wilson Foundry Co. in 1937, a firm that manufactured castings such as motors. By 1943, Yellow Truck & Coach was added to GMTC, completing the division that from then on would be known simply as GMC. I bet you owners of GMC trucks had no idea that your vehicle has no less than four bloodlines from combined companies whose names no one now remembers. It has been 106 years that truck manufacturing has taken place on this piece of land.

In 1972, Pontiac West became a GM Truck & Bus Division plant, but by 1994 GM announced the plant would be idled. 4,000 workers were employed there at that time. Signage on the front office of the plant indicated that the other GM divisions housed here at the time it was shut down included the Pontiac Pre-Prototype Operations, and their North American Materials Testing Laboratory.

If you own a GMC Sierra or Chevy Silverado with a VIN code "O," "E," or "V," then it was assembled here in Pontiac.

By the way, that UAW flag now flies on my basement wall.

By 1997 the facility was in use once again, under the name GM Truck Validation Center, building platforms for trucks. Sloop said that in 1997 the entire plant had been overhauled and made completely state-of-the-art at that time.

However it is evident in these photos that older portions of the plant remain, because as you can see that the classic 1920s Albert Kahn-style columns of reinforced concrete are present, namely in Building 20:

It is hard to convey just how cold it was in the plant that day...I can't even look back at these photos without shivering.

One of the first things we did was rummage around in some of the offices and locate official GM denim jumpsuits to put on over our clothes, both to help protect against the horribly frigid air trapped inside the plant, and to make ourselves look like we belonged here. 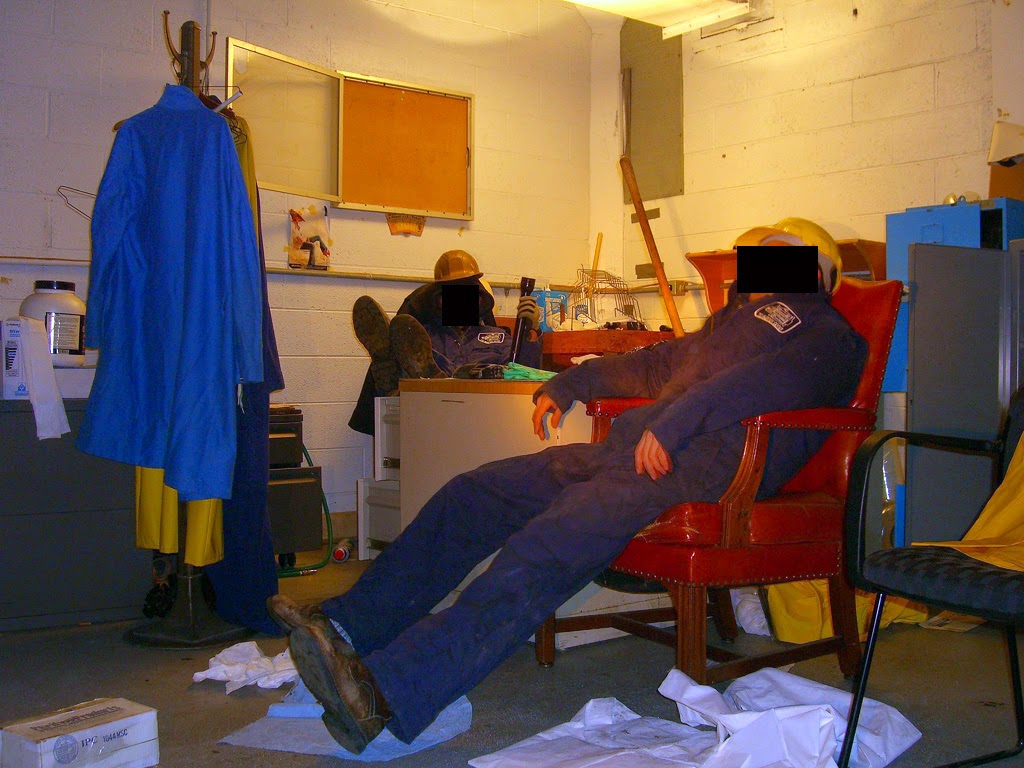 ...Then we took a union break.

BBQ chicken wings, Guns & Ammo, and a Chevy piston. They go together like work and napping:

Bran-new in the box Starrett caliper micrometer set...these represent a fraction of the top-of-the-line tools and equipment that will probably get demolished with the plant:

Pallets full of aluminum 4-cylinder Chevy S-10 engine blocks...these were all orange-tagged "REJECT," but nonetheless the core value, or scrap value of this pile represented a small fortune to someone like myself:

We came across a couple not-so-well-hidden UAW flop spots, made from the foam that is normally used as the padding inside the seats of your car, and a couple gaming rooms for playing cards, etc.

Once again, everything is made from stuff found around the plant. Notice this gaming table is held up with yellow safety cans:

We even found one flop spot up on a catwalk that was actually still occupied by a sleeping UAW guy. Apparently nobody bothered to wake him up when the plant shut down and it was time to leave: 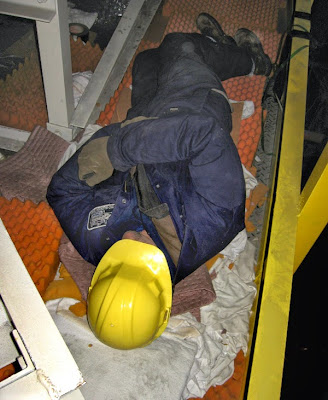 We gave him a nudge and said it was his turn on the PlayStation but he just mumbled and rolled over….

We got to the roof and realized we could go up on the big GMC billboard that has advertised to everyone driving up Woodward for decades. The tiny, distant building on the horizon at extreme left is the Daimler-Chrysler headquarters in Auburn Hills:

Once up on the billboard's catwalk, I noticed that in small faded paint at the bottom once read “Plant Tours Daily:” 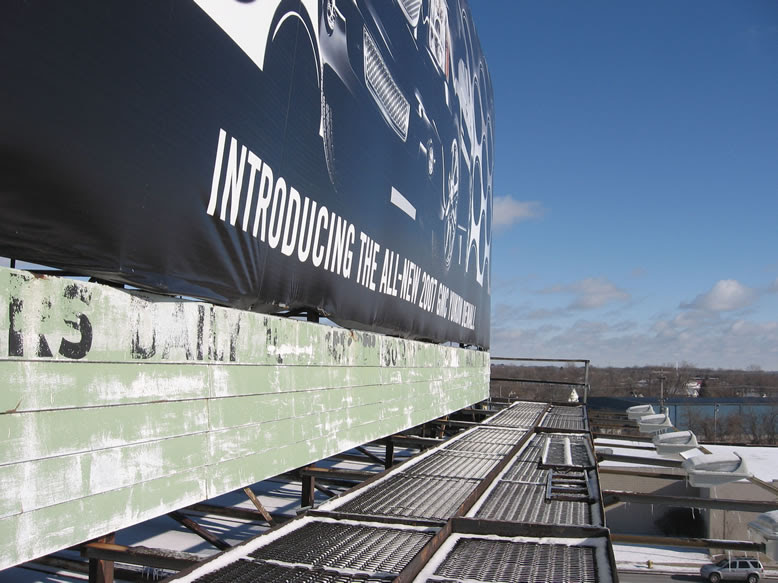 It’s been awhile since they’ve done that, I bet. I can just imagine how that would have gone...

"And if you look to your left (past the glaring safety violations), you'll see one of our bran-new models rolling down the assembly line (with a guy sleeping off a hangover in the trunk)!"

"On your right you'll notice one of our ace plant managers, using a stopwatch to record just how fast we're falling behind our European and Japanese competition!"

"Up ahead we will get to see a typical workplace accident in progress, as a blue-collar man is maimed because of the way our corporate policies and blind upper management have resulted in dangerous conditions in order to make up for a slump in sales (and vindictively stick it to the UAW over concessions they pried out of us last contract) by laying off workers, so that he is forced to do extra jobs that used to be performed by two other men!"

Though most of the plant is wrapped in that eyesore white corrugated aluminum, there are spots where the old brick architecture can still be seen:

The huge white thing on the horizon in the next shot is the also abandoned Pontiac Silverdome, former home of the Detroit Lions (which I also managed to infiltrate before it officially closed, in an older post):

One of the more amazing finds we came across were the trunks of unused spaceman-style fireproof suits. I had to help Sloop get into the damned thing, because it's as heavy and cumbersome as a medieval suit of armor: 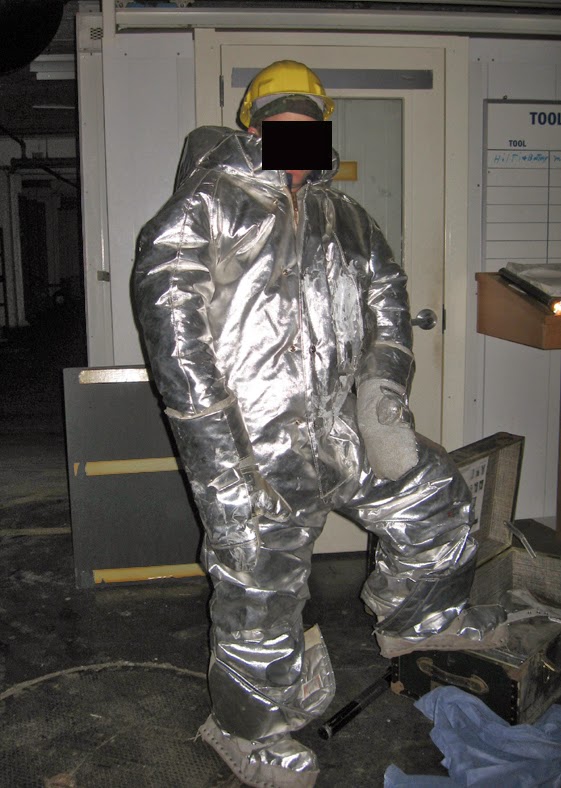 We wanted to loot one of the suits so badly, but the logistics of getting it over or under the tall fence around the plant in anything resembling a discreet manner pretty much precluded that. I can only imagine each of these suits costs thousands of dollars.

Here was a booth for some kind of coating bake process, I presume, or something else that apparently involved high heat: On the assembly line in Plant #5 we found there to be auto parts still sitting in their containers, such as coil springs and entire front steering linkages for S-10 pickups…bran-new, waiting to be installed, not even collecting dust yet.

This plant is one of the bigger ones I've ever explored, sitting on 133 acres and with 1.68 million square feet of space under-roof.

The assembly line track ran through the floor and snaked around the entirety of Plant #5.

A welding station, with protective blinds:

I can only imagine the salivating hoards of scrappers who were watching this joint before it was torn down, hoping to sink their teeth into it. Many of them were probably former workers here—who know just what has been left behind—or who at least wanna clean out their office better. Many cubicles I saw had everything still there, as if the employee was merely on smoke break.

A drawing room in the materials / prototype testing lab:

A glimpse into the mind of the world's largest corporation: 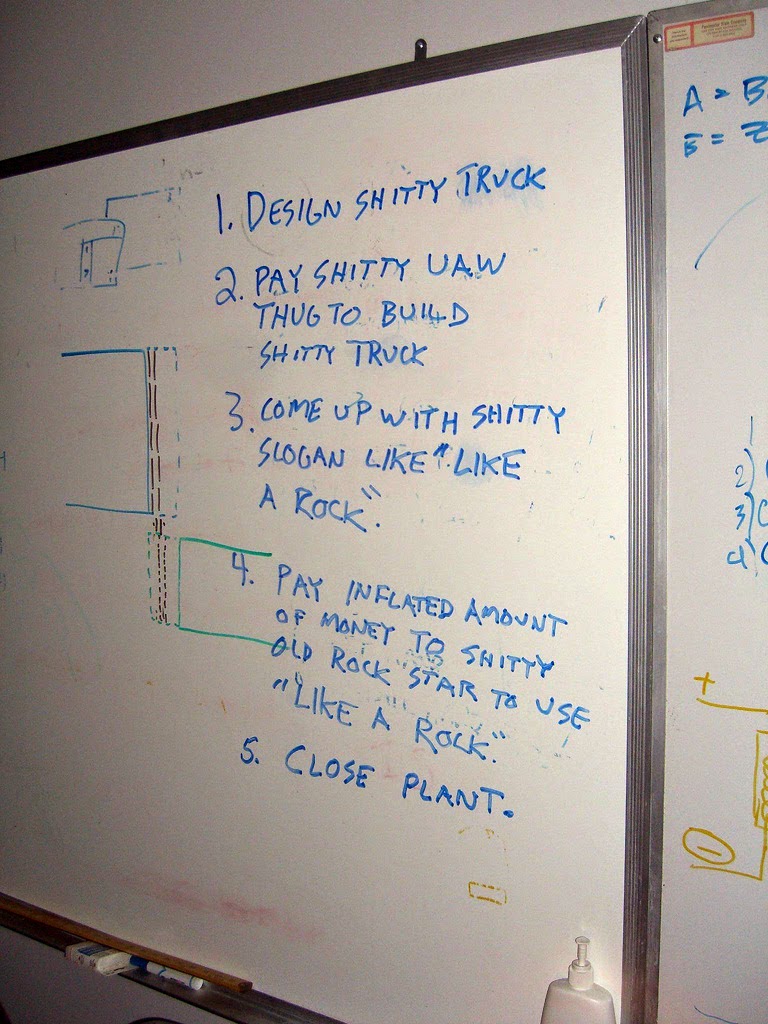 Looks like the "body drop" portion of the assembly line:

I have remarkably few photos from this plant despite the fact that we spent over six hours exploring it, partially because there were so many dark areas, partly because the severe cold sapped my camera's batteries prematurely, and partly because my hands were so cold that most of the time I didn't want to bother taking my gloves off to use it.

But I have rarely if ever seen a more complete and modern plant left abandoned like this with so much stuff left behind.

In 2009—one year later—the Pontiac East Plant was slated to close down as well, essentially gutting what was left of the city of Pontiac's manufacturing core. Today Pontiac West, Pontiac East, Pontiac Central, and the Fiero Plant are demolished.