The old downtown Detroit of soot-stained Victorian houses and cedar-block streets was almost entirely laid flat long ago, and starting in the 1950s the "future"-ization of Detroit's riverfront began with Hart Plaza, and the Civic Center. Since it has been pretty much set in stone at this point that the old Joe Louis Arena has a date with the wrecking ball, I figured I could do a little something on that topic, seeing as this whole area is likely to be transformed again (most likely for the worst). 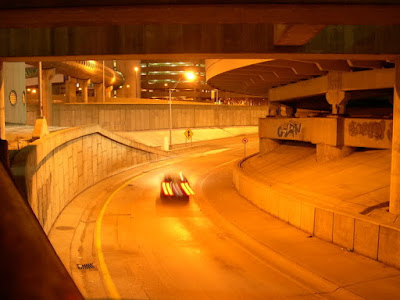 I’ve always gotten a kick out of this jungle-gym of the concrete jungle, despite its belonging to an era of design that I usually scowl upon... 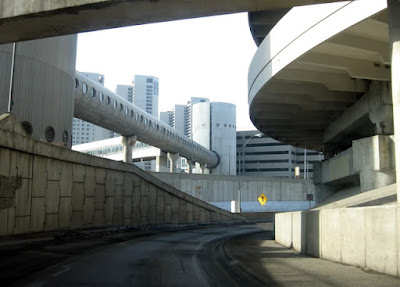 ...this is the kind of built environment that captures a kid's imagination (as it did mine). 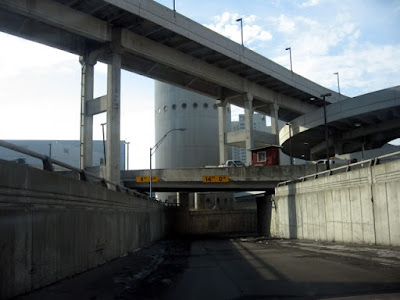 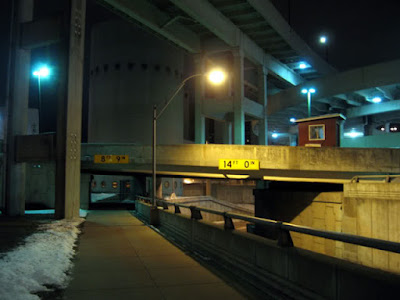 I’ve been to many Redwings games or other events at the Joe, and almost always entered the arena through what is now called the Gordie Howe Entrance. To do so you must go through these futuristic "people-tubes," and to get up in the tubes, you have to go into the silos, or "nodes" that contain the spiral ramps leading up: 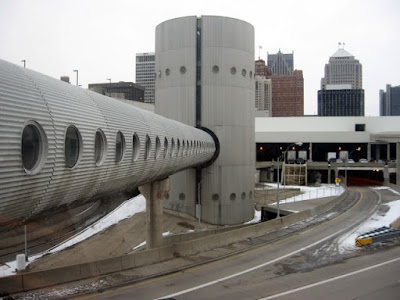 While I can't find much specific info about the pedestrian "tubes and silos" themselves, there is further reading on the Joe and its infrastructure HERE. He notes that all these tubes and things are mostly extraneous infrastructure, essentially a band-aid to try and give pedestrian access to a windowless compound landlocked in a sea of bald concrete that discourages interaction with the surrounding neighborhoods. Though I have to wonder if it is just mostly another sign of lazy-American syndrome that it has been branded as such.

I personally have no problem finding my way around the area, and I think it's fun to move around in all this "extraneous" infrastructure; it is a lot more fun than simply crossing a street on a regular boring old crosswalk (yes, I was that kid who was still trying to play in the cheese maze at Chuck E. Cheese's when I was probably a little too old for it). I also do not have a problem finding the local bar before or after a game. I think the people that complain about this sort of thing are often the type who are not inclined to hang around in the city anyway.

I don't think the problem is all the architecture's fault, I think it's largely us. These kinds of vast, inhospitable concrete fortresses exist because the masses demand it—we just want to see our hockey, get in our car, and race back home to the 'burbs to continue vegetating, where there are no people of different skin colors or lower economic statuses to challenge our worldview. Detroit essentially ceased to be a city in the 1980s, and today only seems to exist to facilitate events at arenas designed for people who don't live nearby. Until we change that, we can only expect more isolationist architecture. And for that change to come we need to change the way we live and think—and that is unlikely to happen soon, based on what I'm seeing. You're reading this on a smart phone while driving on a freeway, aren't you?

But enough of my silly pontifications. The insides of the silos look like this, if you look up... 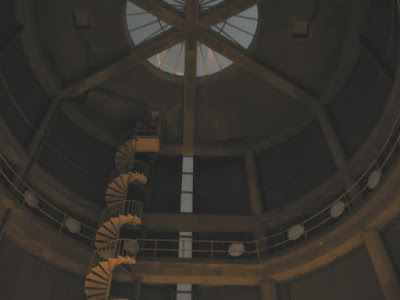 ...which if you're a suburbanite, you do a lot of when you're downtown. Just messing with you.

As far as I know these towers are only open during events, such as hockey games. 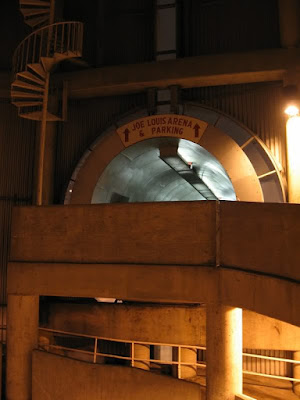 For a long time I’ve eyed that spiral stair with a mind to climb my ass up there, regardless of whether the hatch was unlocked at the top or not; I just never quite got up the guts. And that pole’s slippery...if you were to fall off it, there’s a pretty wicked drop down to the concrete if you slip and go the wrong way. Another problem is that this tower is usually packed with people going into the arena, so that means there could be a security person at hand (or some easily rattled law & order suburbanite ready to call the cops on anything remotely inappropriate). But other than that, there was nothing stopping anyone from helping themselves and climbing the bastard.

Well one night I had my buddy Sloop in tow, and noticed that the crowd was kinda sparse, since we were a bit early. On top of that, the friggin' hatch was obviously wide open: 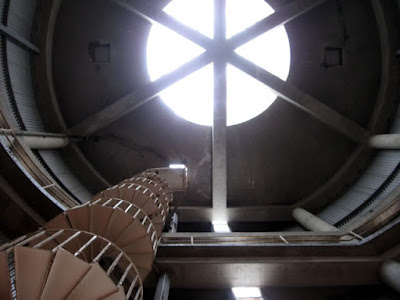 I paused long and looked at that pole, trying to miracle myself up it. I could feel myself climbing it. Sloop had kept going into the arena without me…so I tore myself away and ran to catch up with him. We decided we should try it on our way out after the game, but I knew in the back of my head that I was probably not going to feel like it by then. 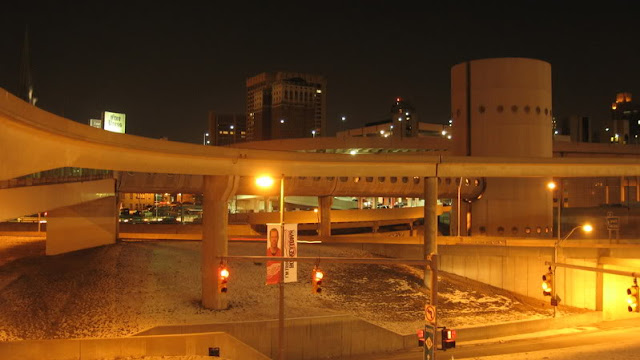 As per usual, the tubes were packed with people trudging back to their cars after the game. We got to the top of the ramp in the tower again and stopped, Sloop asking whether I was gonna try it. We both started making excuses and balking at the notion. 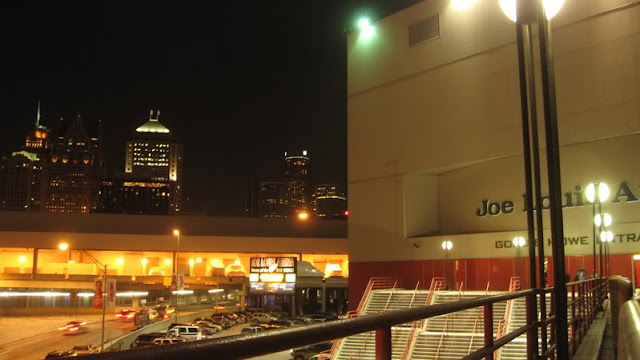 One of the ubiquitous wheelchair panhandlers was camped out on the top of the ramp as well, hustling change from the fleeing spectators. We sat there working up our courage, but the $8 beers sloshing around in my stomach were weighing me down. I stood on the railing, just to see how far up the pole I could reach. Pfft! Not even halfway, and my huge work boots were hardly suited to the task of pole-shimmying. Quickly, the crowd began to thin. 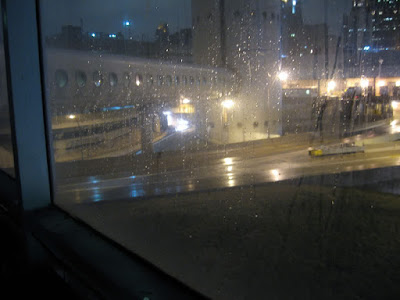 We were sitting there all alone now, looking over the situation and just milling about, casually BS'ing with the wheelchair dude. He knew what we were up to, and said he’d never known anyone who had ever got up there. He proffered that it might be easier to climb up the rounded mouth of the tube, and then stretch yourself over to the bottom of the spiral steps. I began putting my gloves back on and grabbing on to the side of the tube to climb my out of shape ass up there. It’d been a long time since I’d been able to do some real climbing. It took a bit of fumbling around up there and some coaching from Sloop and the other guy down on the ground, but soon I was in business.

My "ground crew" coached me as I went up…the guy in the wheelchair announced he used to be a "B&E artist," and that this kind of thing was "his specialty." Do tell! 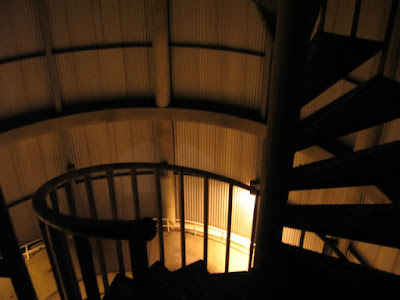 Finally I dragged myself up onto the bottom step of the stairs and began greedily ascending. The futuristic tower reminded me of Cloud City from Star Wars, or the Titan II missile base I explored in Colorado with Drew and Cavemonkey. Looking up, it reminded me of the part in Charlie and the Chocolate Factory when they drink the forbidden pop and start levitating toward that huge fan... 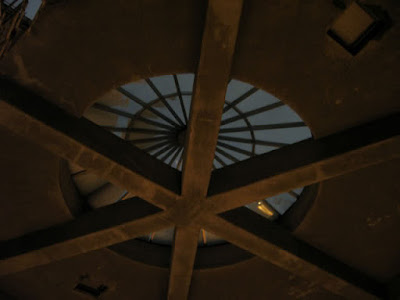 I stopped at the catwalk midway up to drunkenly try and shoot some long-exposure photos without a tripod: 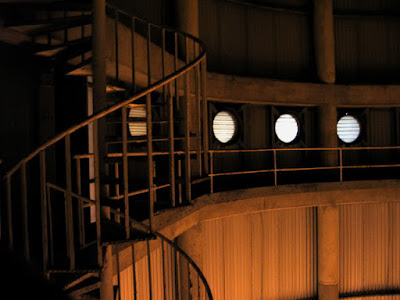 My ground crew looked on with grins of approval: 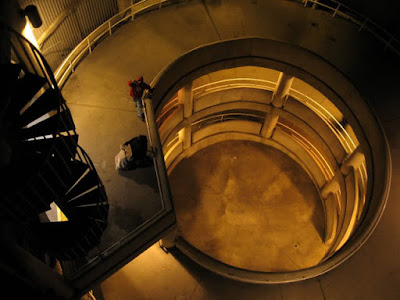 I continued to the open roof hatch with haste, and Sloop began his ascent behind me. Popping out on top, I beheld the sodium-illuminated glory of Detroit at night, and the glassy surface of the semi-frozen river: 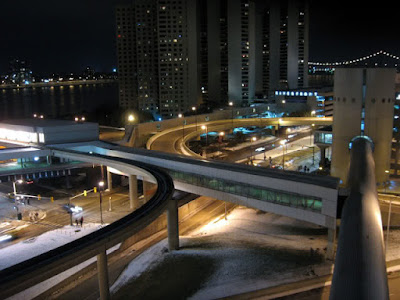 The concrete jungle-gym spread out directly below me with cars occasionally shooting past in all directions: 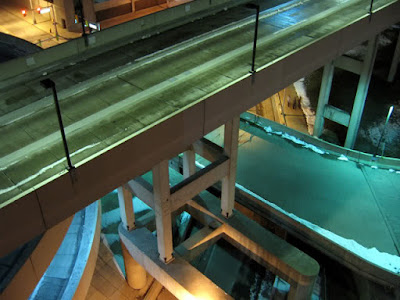 Downtown itself was framed by the gem-shaped skylight roof: 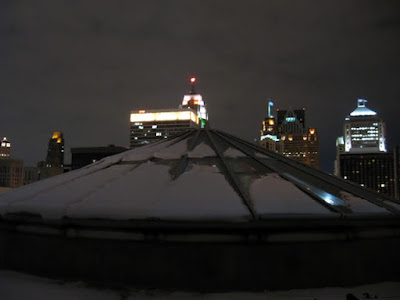 Forgive my blurriness…it’s hard to hand-shoot 1-second exposures with giddy climber’s hands and no tripod: 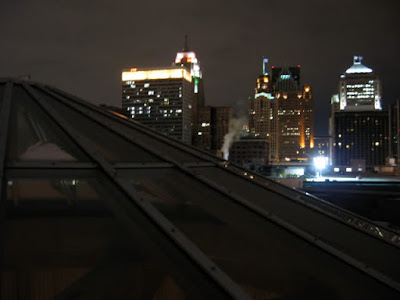 The Joe itself was now almost deserted, the throngs having vanished like a hot fart in the cold wind: 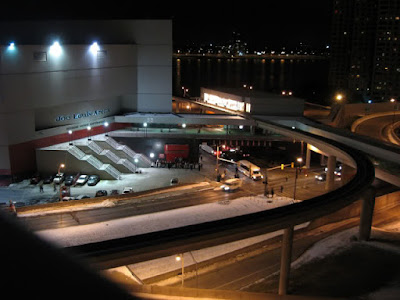 I peered down into the skylight and saw our wheelchair buddy roll away: 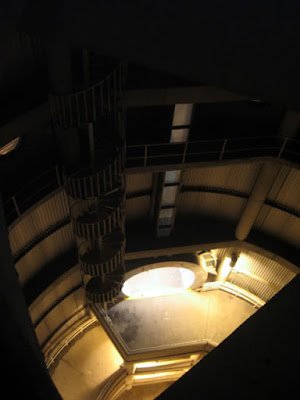 We posed for a picture with Sloop's camera, and an improvised tripod, which made for much better results...I'm the one on the right: 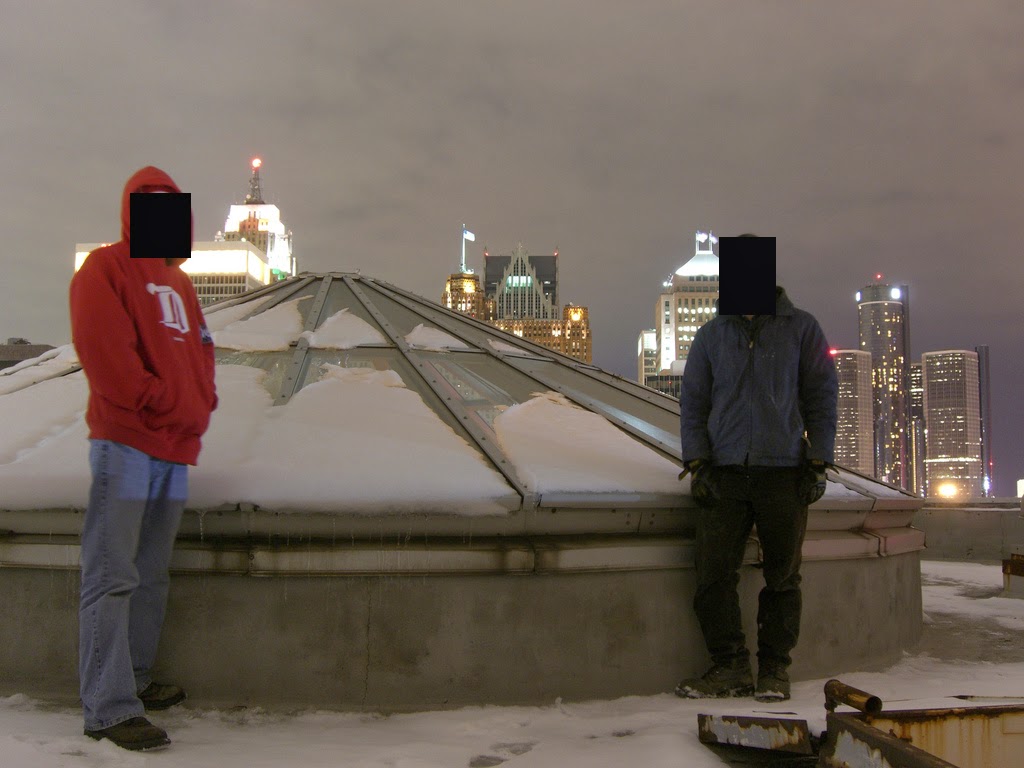 Just to the north of us was the spiral Cobo Roof deck ramp... 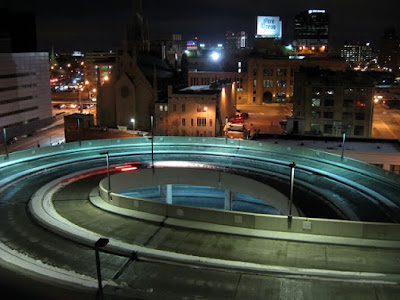 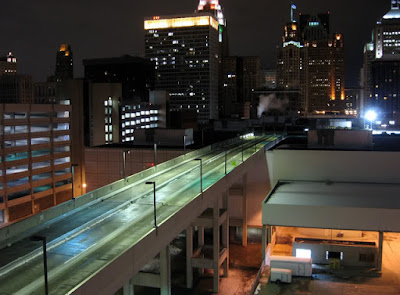 As well as the newly renovated Fort-Shelby Hotel showing lights in its windows for the first time in decades... 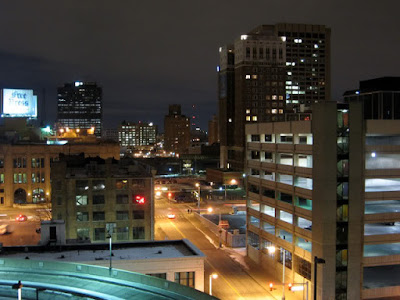 …and the rear of the practically ancient Fort Street Presbyterian Church, which I have also climbed the roof of, in a different post: 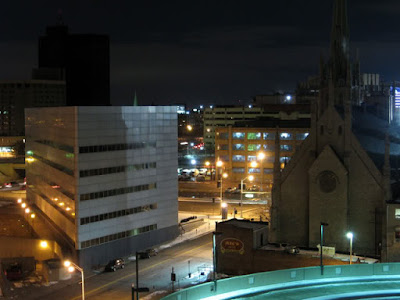 It sits next to the shiny silver Wayne County Community College, which stands where the old Union Depot used to be. If you’ve seen the movie Detroit 9000, you might remember the shootout scene filmed there. The huge, blackened skyscraper in the distance in that shot behind it is completely vacant. Notice also that Tommy's Bar is still called Mac's On Third. 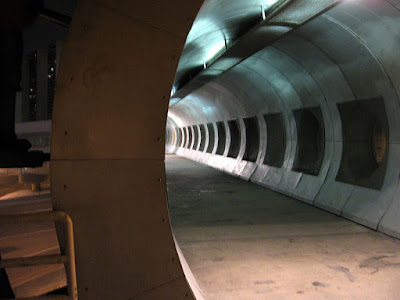 Of course we had to come back down and get the hell out of there before the place was locked up for the night. 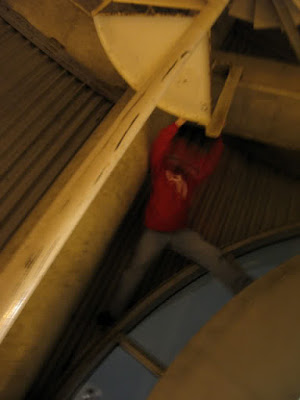