The unsuspecting St. Petri Evangelical Lutheran Church located at 2281 Pierce Street does not show its true age. It actually is an old German congregation's sanctuary from the 1870s that has evidently been the recipient of several facelifts (or face-drops, if you prefer). Despite its prominent location near a main artery of the city, it was a long time before I managed to wander inside for a look. 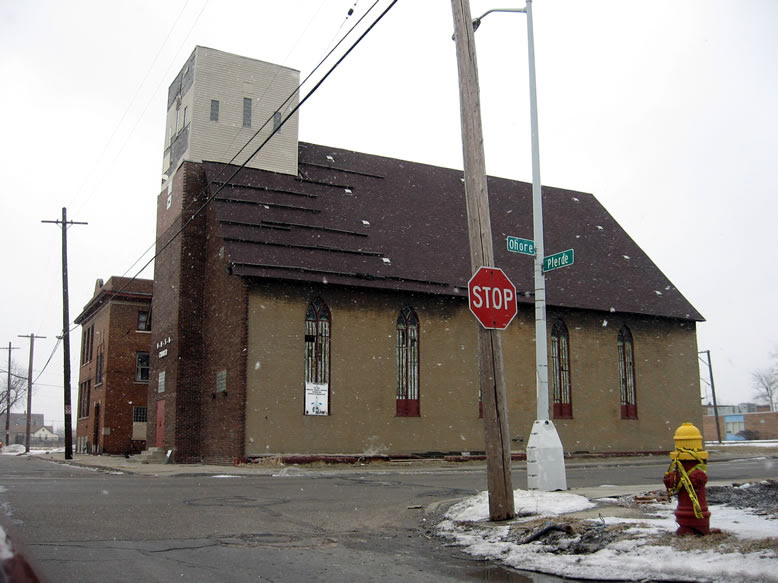 The smaller building next to it was the St. Petri Schule (school), erected in 1912. According to the Journal of the Common Council for 1908, this church was located on part of the former James Campau Farm (when the church seems to have applied for a deed modification perhaps regarding the construction of the school). 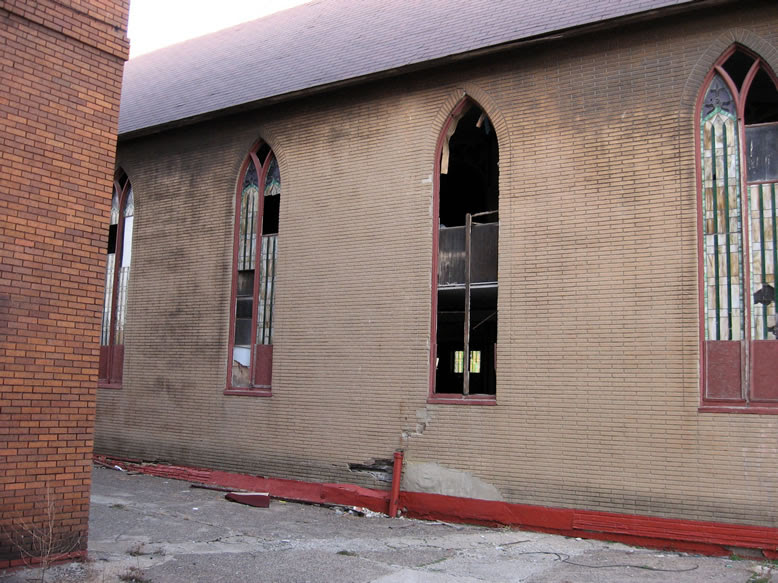 From what I can tell, there were at least three St. Peter (Petri) German Lutheran congregations founded in Detroit. The first St. Peter's started under Rev. J.F. Winkler in 1846 in a log cabin somewhere outside the village of Detroit before moving up Gratiot Avenue to the suburb of Eastpointe as the village became a city, where they still operate today. Another St. Peter's Lutheran started in Detroit in 1930 as a German-Transylvanian congregation and later moved to Warren.

The c.1889 book The History of Detroit and Michigan or the Metropolis Illustrated by Silas Farmer seems to finally indicate the church that we are dealing with here, though he does not mention either of the other St. Peter churches. Farmer includes an illustration of what definitely appears to have been this building--in its better days--on page 622: 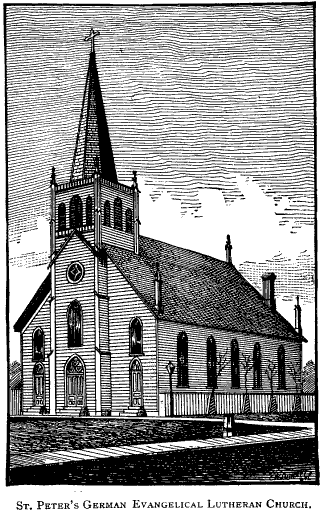 Farmer says this congregation was started at the northwest corner of Chene and Pierce in the spring of 1878 under Rev. Emil Dankworth, and the building was consecrated that June. Farmer writes that the sanctuary seated 1,200, and in 1880 there was a total of 750 communicants. Rev. Dankworth died in the spring of 1887, to be succeeded by Rev. C. Fredenrich. That autumn, he in turn was replaced by Rev. G. Schramm.

From what I can tell, St. Petri's dead were interred at Trinity Lutheran Cemetery, which is the one that sits on Mt. Elliott, across the railroad tracks from the Packard Plant. 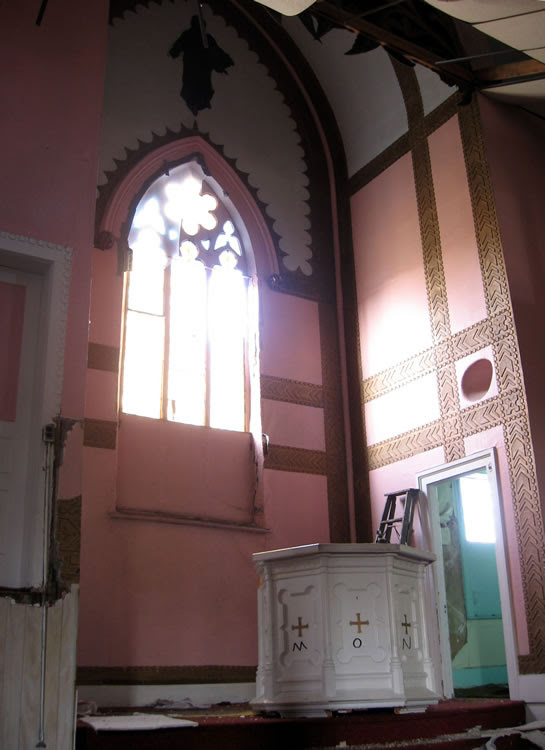 The letters hanging on the front of the church in my first photo stand for "Universal Hagar Spiritual Church Association," which was established in the Black Bottom neighborhood on Columbia Street near St. Antoine by Father George William (Willie) Hurley and his family on September 23, 1923.

Hurley founded the church "for many reasons," mainly that of "aiding drifting humanity." Father Hurley declared that God "showed him the U.H.S.C. in the form of a brown skinned damsel and said unto him, 'this is your wife, take care of her.'" They later moved to Gratiot Avenue, and after a couple more years Father Hurley saw the need for a seating capacity of over 400, so a building was bought at 944 Napoleon Street. 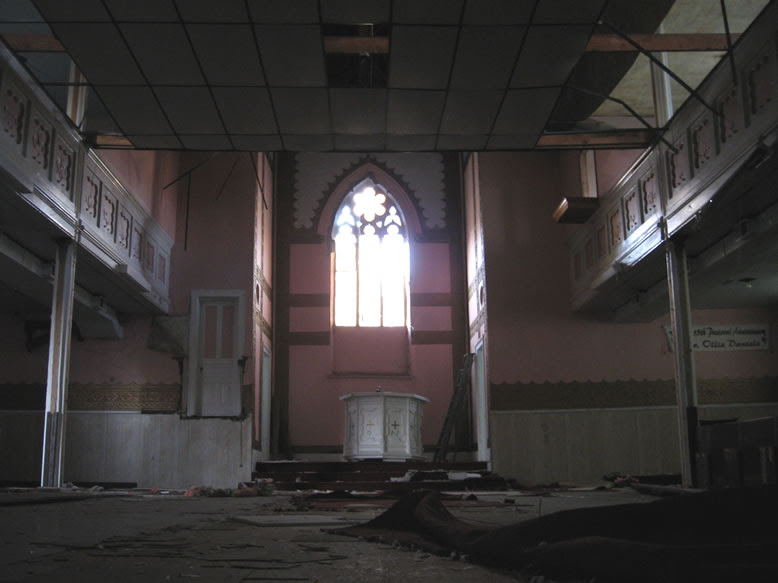 Around 1945 St. Petri merged with St. Thomas Lutheran at 8690 Chapin Street, and the UHSA purchased this former German Lutheran church. As you can see they made some modifications, but most of the old Victorian decor still exists, faded and cracked though it may be.

I explored another 1880s-era German Lutheran church like this one nearby in a different post, the Bethany Evangelical Lutheran Church. 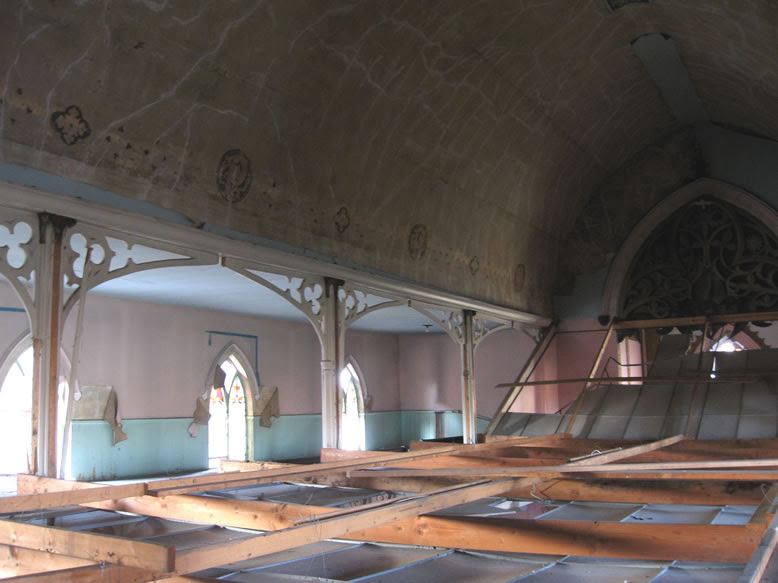 According to the UHSA's own website, today they have churches in Michigan, New Jersey, New York, Pennsylvania, Georgia, South Carolina, Ohio, Indiana, Illinois, Maryland, Virginia, Wisconsin and Connecticut. They also have a rather unique mission statement:

It is our mission to offer mankind a true knowledge of God and to give our members a higher moral, religious and industrial education. This mission is more than just church service but may also involve self awareness seminars, economic development workshops, health seminars, financial planning etc. We are interested in ministering to the whole person. 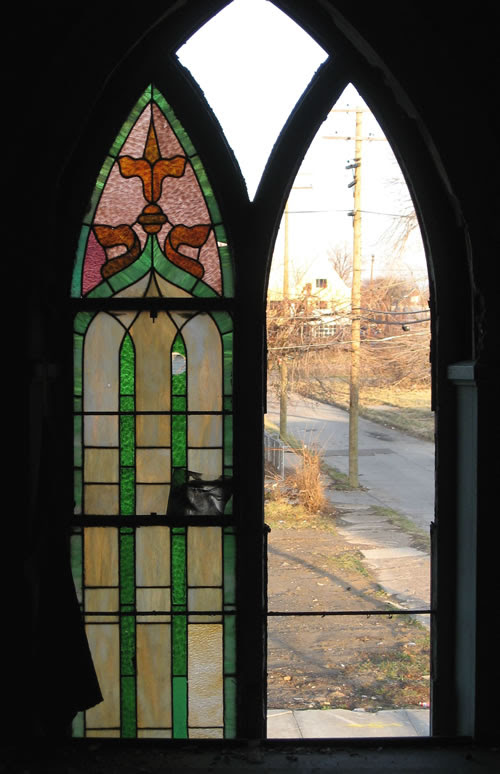 According to the book The New Black Gods: Arthur Huff Fauset and the Study of African American Religions, by Edward Curtis IV and Danielle Sigler, Father Hurley's UHSA Church would become the "nation's largest black Spiritual church," and Hurley even called himself the "Black God of the Aquarian Age." 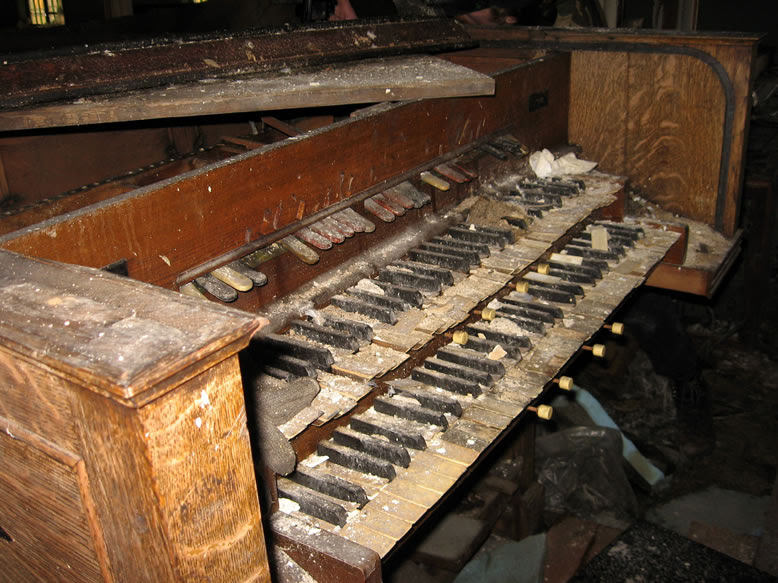 Fr. Hurley published what Curtis and Sigler called a "remarkable" pamphlet in 1930 entitled "Arabian Science" under the pen name Aboonah Adam, in order to promote linguistic competence amongst his followers.  This, he hoped, would increase freedom for "American 'Ethiopians,'" who he felt were held back due to lacking a mastery of the English language. 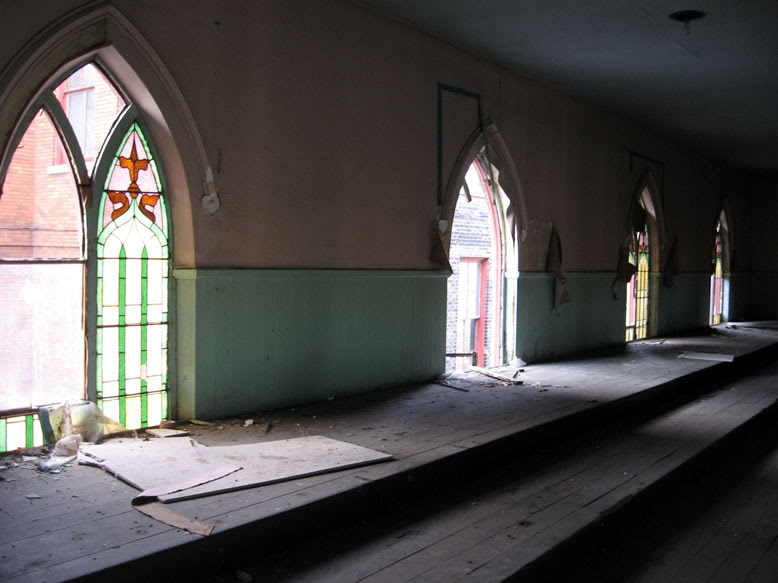 Fr. Hurley's "Islamic phase" however, as Curtis and Sigler put it, was brief. He seemed to absorb Islam and Arabic into his "heterogenous Spiritualist practice" as he had so many other dogmas, and kept moving. 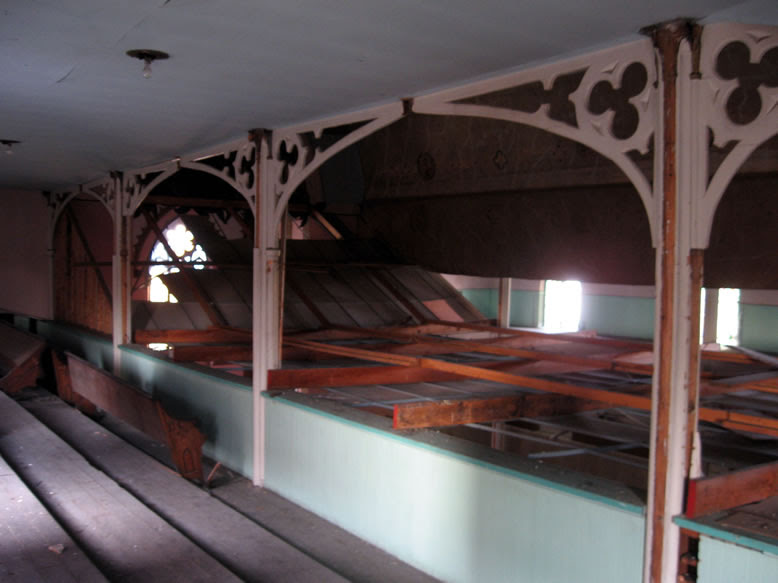 It's actually pretty amazing how intact the original interior decor of this place still was, in spite of the exterior being almost unrecognizable. 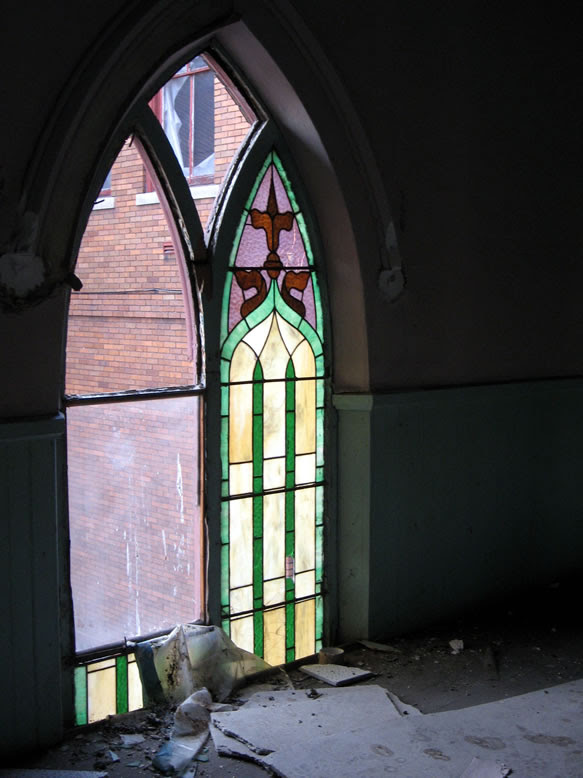 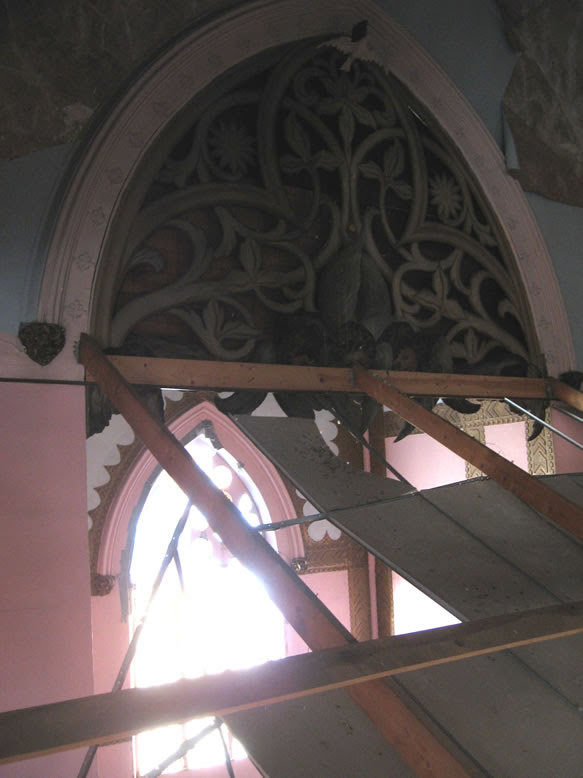 In April of 2010, the UHSA moved into a new national headquarters at 555 Oakwood, Detroit. 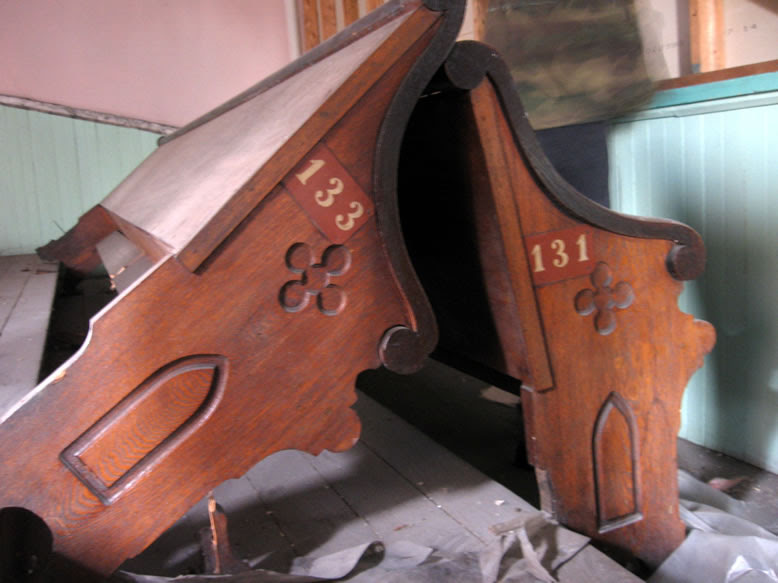 This church was demolished in February of 2013, at the outset of the much heralded Detroit Blight Authority headed by developer Bill Pulte, wherein a 10-block sector of the city deemed as "blighted" was leveled in a matter of days with no announcement or public explanation from city officials until after work was completed.

I sure hope someone at least stole the pews and salvageable windows before that happened. 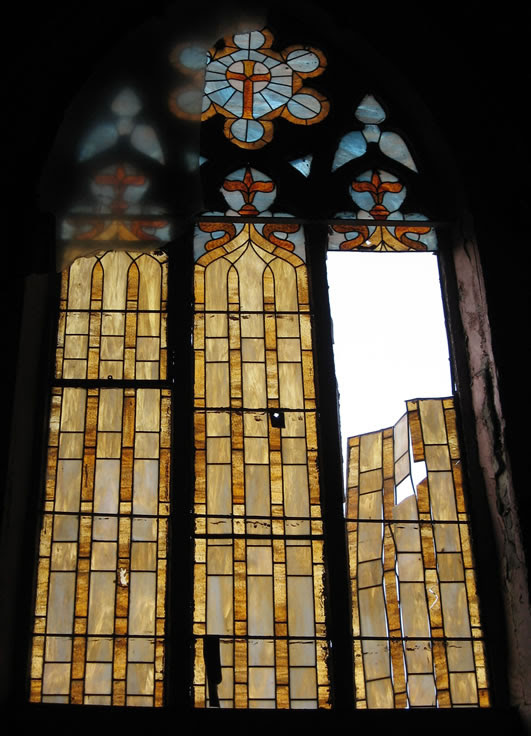 I went into the school briefly, but there wasn't much left in there worthy of photographing...unless you like looking at fecal splatters and discarded prostitution paraphernalia. 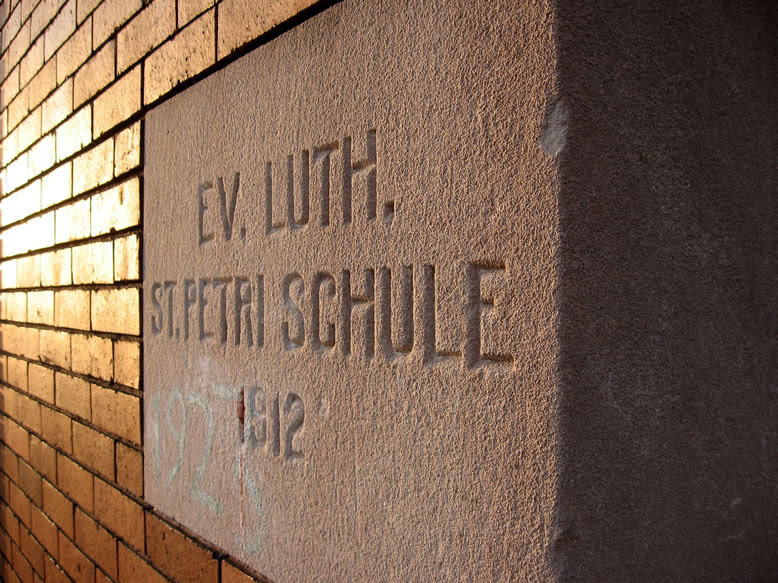