Far away from the touted "incandescence" of Detroit's gentrified Midtown and Corktown, lies the smelly putrescence of the Carbon Works neighborhood. It is a corporate wasteland held almost completely in the thrall of zillionaire industrialists—or, at least held in the legacy, or fallout zone, of said industrialists—where the glowing optimism of the "rebirth" is hard to come by, since the old Detroit of toxic waste and anarchy is still very much in effect at the moment. Despite its small size, the Carbon Works neighborhood is peppered with industrial scars such as the Peerless Cement Plant, and this place:

Next to a pile of road salt about the size of a cathedral stands this pile of ruins at 123 Crown Street, near Forman Street, which as far as I can tell was last known as the Harridon Terminal Wharf, but was originally a c.1900s lumber yard. I think it may have also been used by Morton Salt, or the Detroit Salt Mine nearby.

According to the Port of Detroit World Handbook for 1989, Harridon Terminal Inc. had been part of the Port of Detroit for almost 4 years, and its primary activity was the flow of raw materials, both domestic and export. The site, owned by the Kramer Brothers, started out in various export steel products from the automotive factories, machine turning companies, and steel scrap dealers. It also operated as a trucking terminal and had Conrail service, with a 350,000lb railroad scale. The steamship agent for the Harridon dock was Armon Ship Agency. 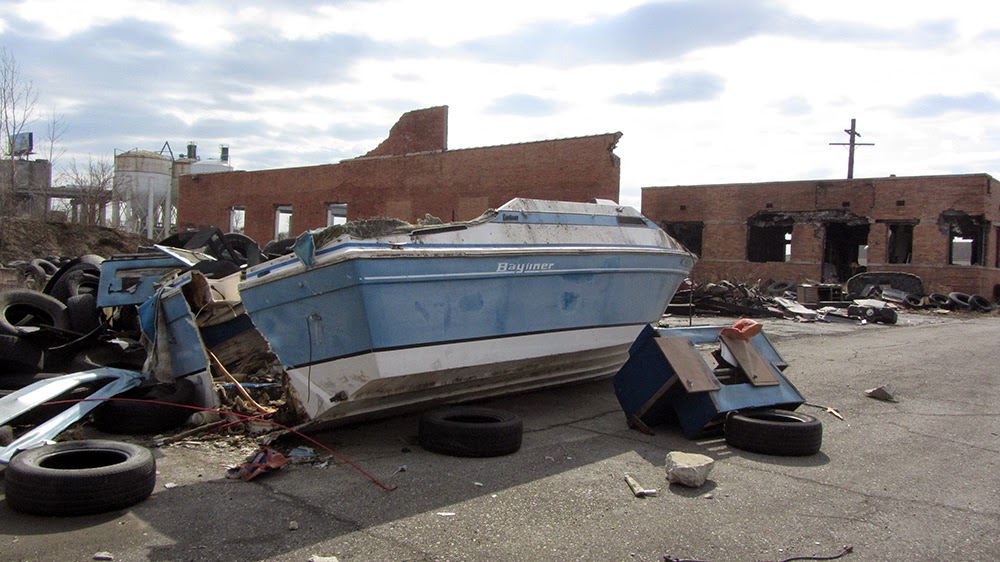 Today the last standing walls have finally been demolished, but if you tune in to Google Maps you might still be able to see what the building looked like before it was hit by a 10-megaton blight bomb. Using that, I was able to match up its shape to some Sanborn maps to see what it was.

The Sanborns for both 1910 and 1923 show this block and this building both occupied by the Thomas Forman Co., who had a flooring mill, a warehouse, drying kilns, a woodworking shop, and a lumber yard here. They kept an average of three million feet of lumber on hand, and had a complement of 160 employees. 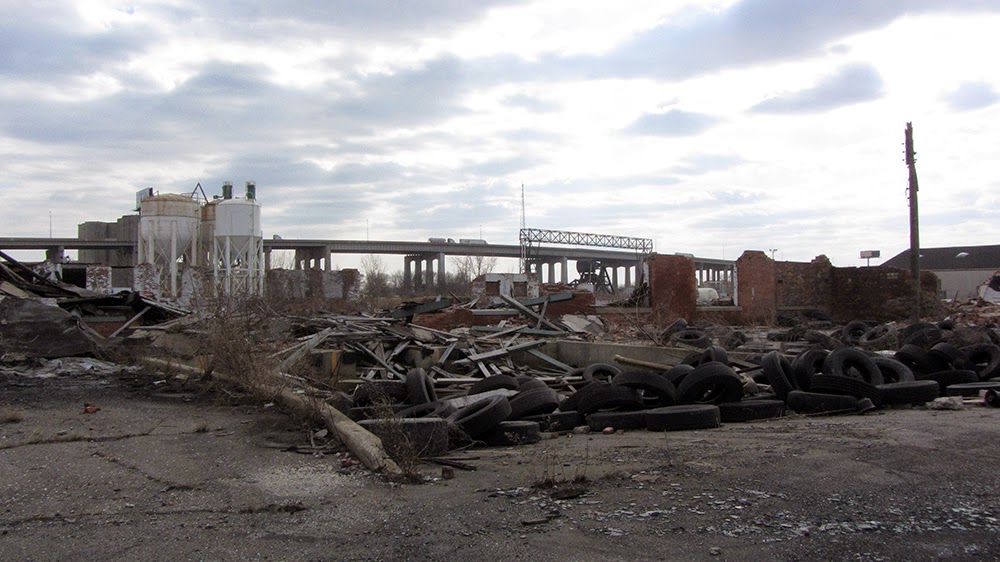 According to The Book of Detroiters by Albert Nelson Marquis, Thomas Forman was born in Indiana but came to Detroit in 1879, where he was partner in Dickerson & Co., a hatter, but soon went north to Petoskey, Michigan in pursuit of the logging industry and a wife. Rarely are both of those things found in the same place, but nevertheless Mr. Thomas came back to Detroit from Petoskey in 1893 married, and at the helm of his own self-titled lumber concern.

The Michigan State Gazetteer and Business Directory for 1907-1908 says that the company was incorporated on January 10th of 1905, sat on a Pere Marquette RR spur, and had a telephone number of South 38. 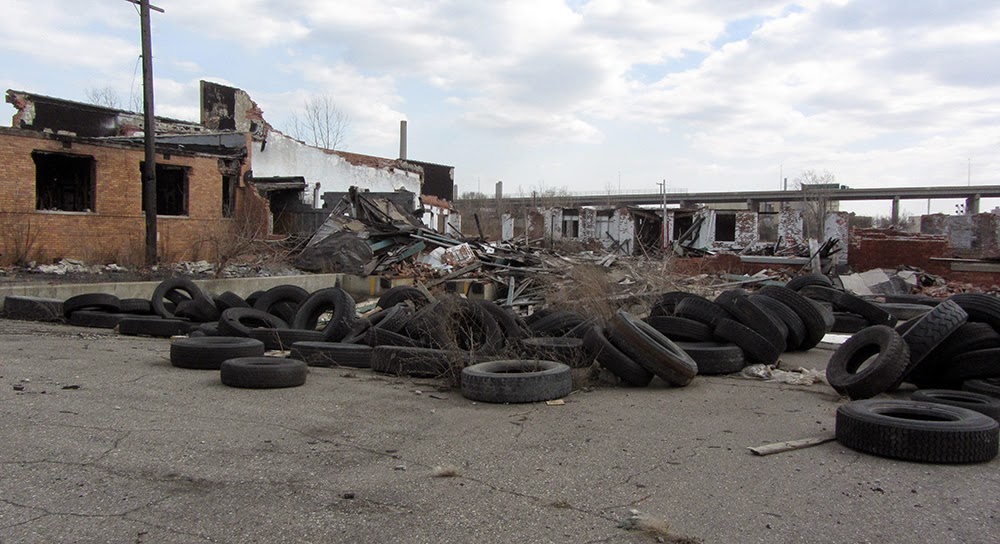 The office of the Thomas Forman Co. was then listed at the corner of Fort Street and Gregory Street, and his residence was, fittingly, at 30 W. Forest Avenue. Mr. Forman was a Republican, a Presbyterian, and a member of the Detroit Board of Commerce. An article in The Lumber World, 1909 says that he was the president of the newly formed Oak Flooring Manufacturers' Association as well. Sheesh, there used to be an association for everything back then! 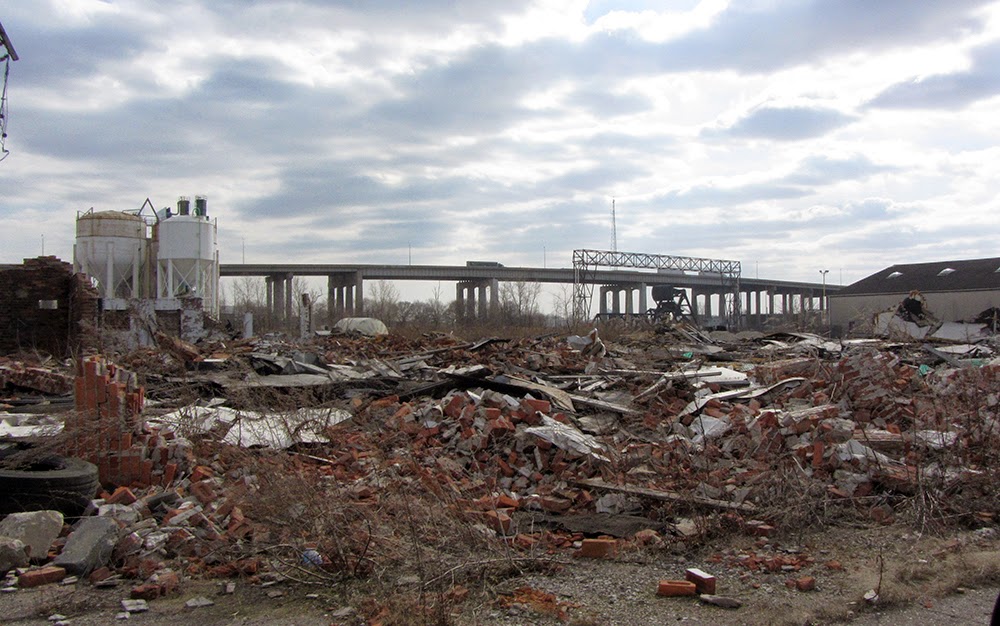 "River Rouge and the western section of Detroit is the logical industrial center of the future," touts one article in the Michigan Manufacturer & Financial Record from 1917. Business leaders and property owners along the Rouge River here gathered at the Detroit Athletic Club to discuss the widening and straightening of the Rouge, so that it could be better opened up for shipping, which would in turn facilitate heavier industry. 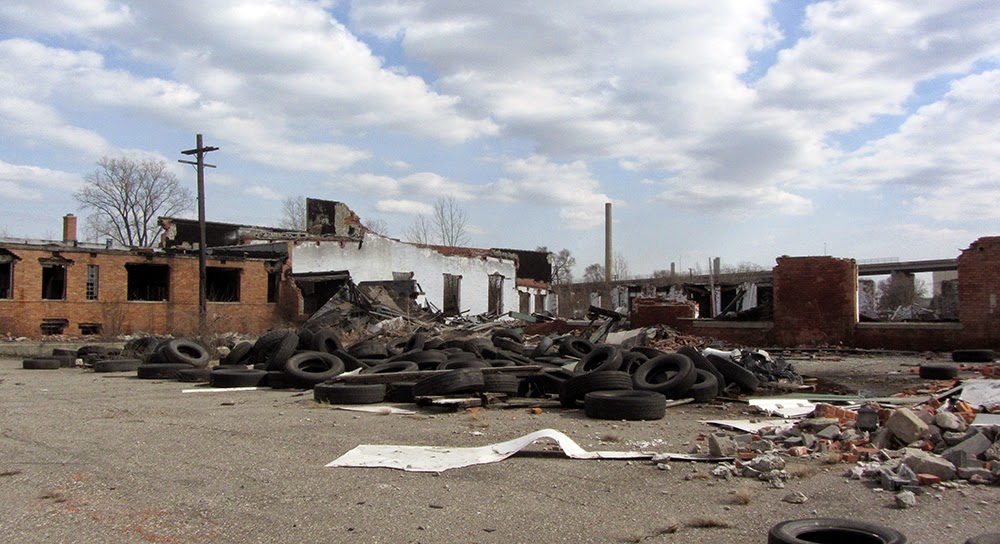 Thomas Forman presided over the meeting, which included several other prominent industrialists, not the least of which was Edsel Ford of Ford Motor Co., J.J. Lynn of Standard Oil, and E. Howard Bingham of Solvay Process Co. 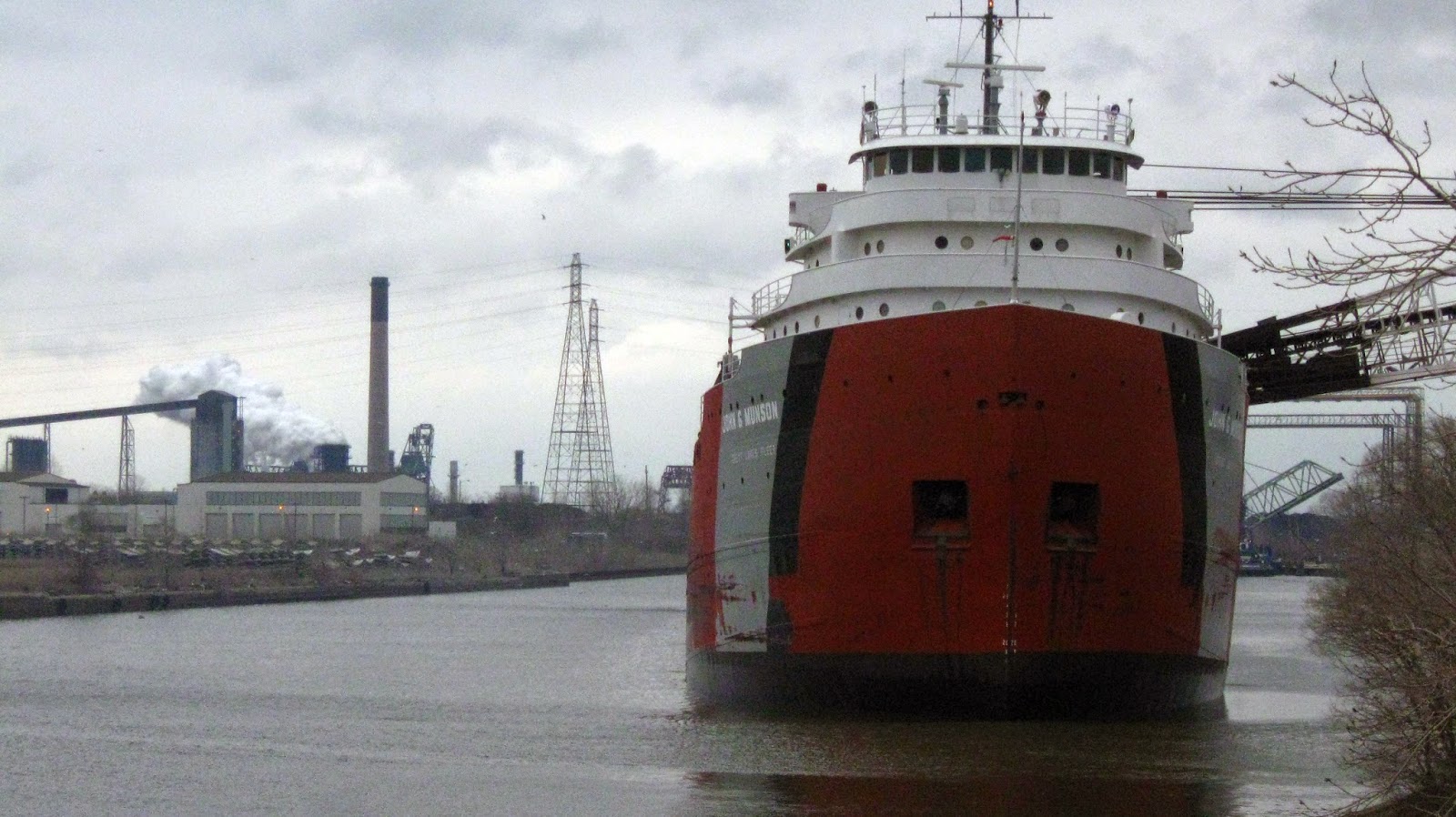 It was this very decision to dredge out the lower Rouge River that facilitated the building of the great Ford Rouge Plant, which would be completed by 1925. Sadly, the building up of the Rouge River also meant the indiscriminate eradication of all the ancient aboriginal burial mounds that once lined it, and the elimination of our chance to learn anything from them. 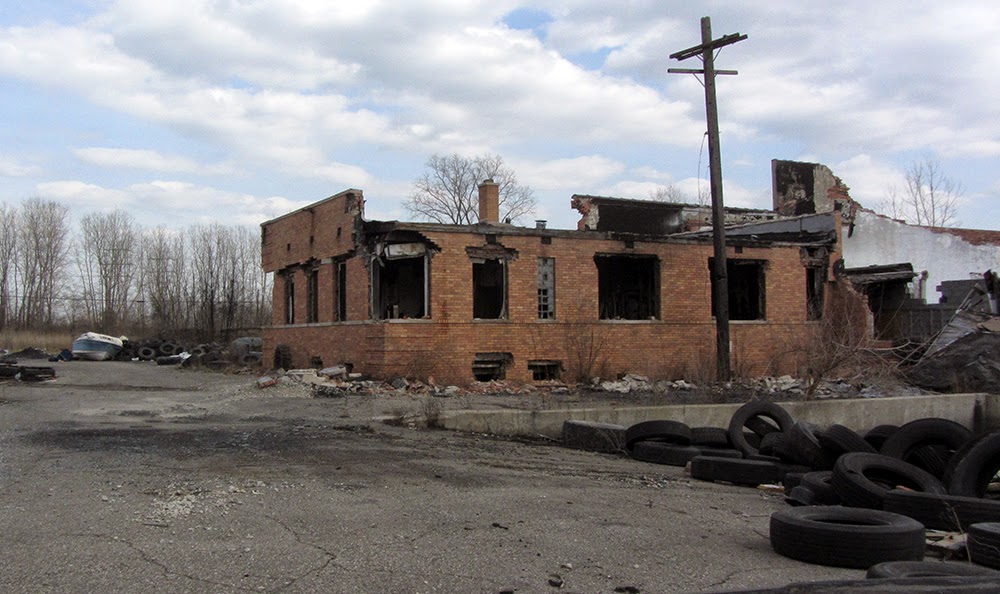 As you can see by the previous photo, some of the buildings in this complex may not have been as old as 1905, and in fact that one says to me a date of more like 1937. These older, white-painted brick walls in the background of the next photo are probably more like 1905: 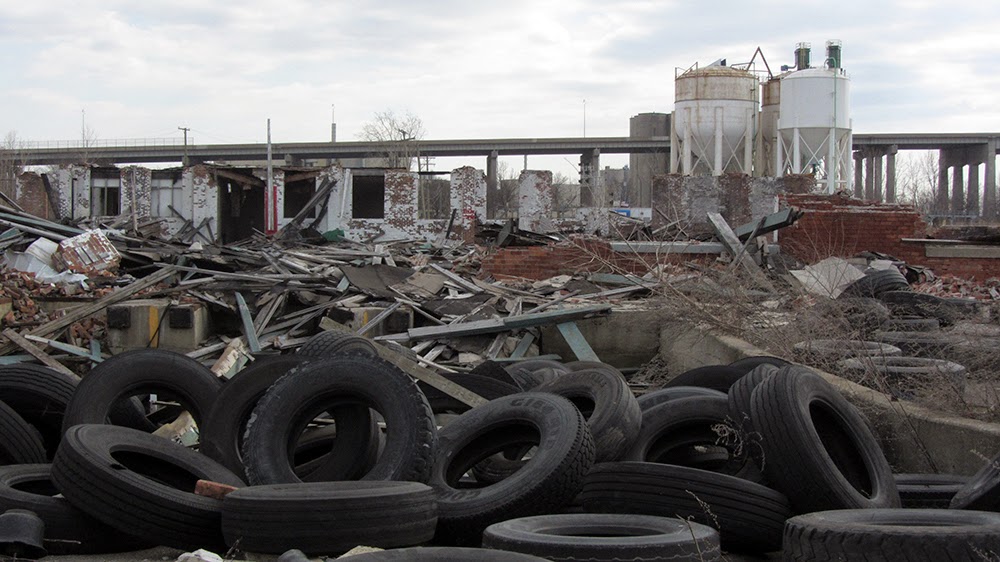 Unlike the glitzy, glamorous neighborhoods closer to the "cool" parts of town that don't give you insta-cancer, Carbon Works—as well as neighboring Oakwood Heights, and Delray—is still being held back by a now-traditional legacy of pollution, abysmal roads, zero police presence, unusable bridges, and extremely un-hip graffiti.