We felt compelled to check out Mammoth Mall perhaps based on its name alone...perhaps just to find out just how mammoth it was. The answer was not very. 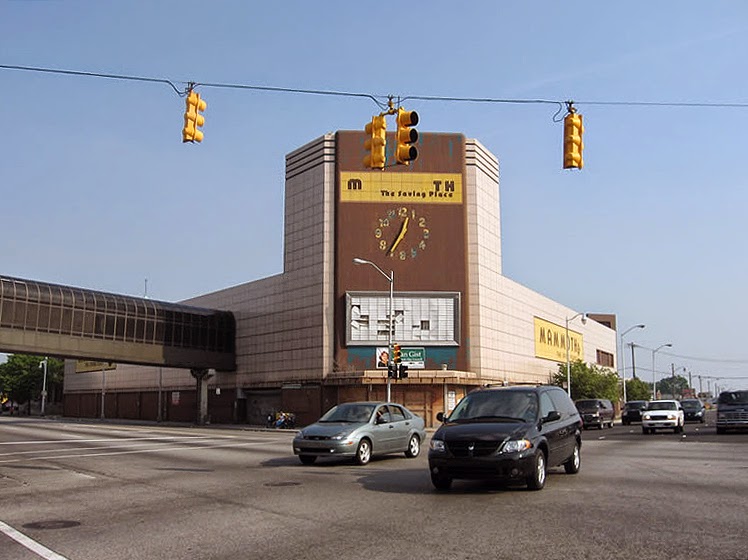 I have a feeling that the rename was an effort at taking a dated old urban shopping center and trying to give it a little more caché to compete with the flashier suburban mega-malls that were still continually drawing shoppers outside of the city. 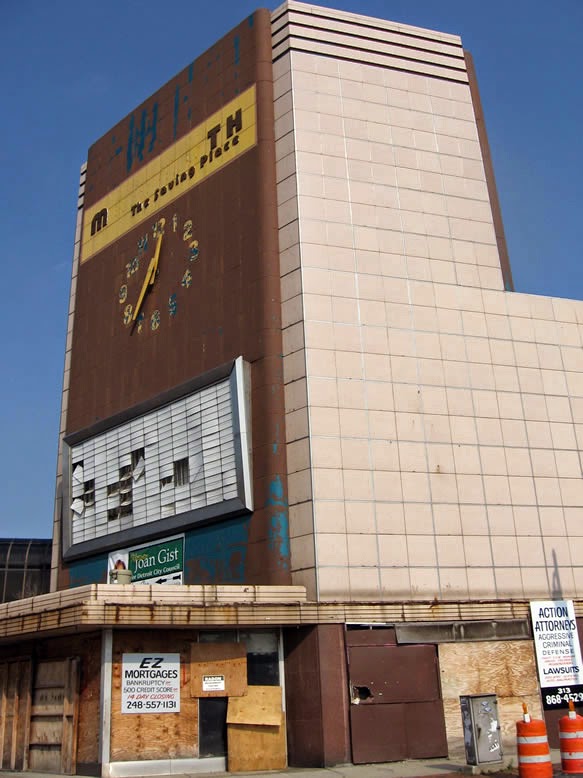 Then I noticed something that gave me a direct glimpse into the Mammoth Mall's origins. Inlaid marble at a now boarded-up entrance displayed a storied name from Detroit's retailing past: 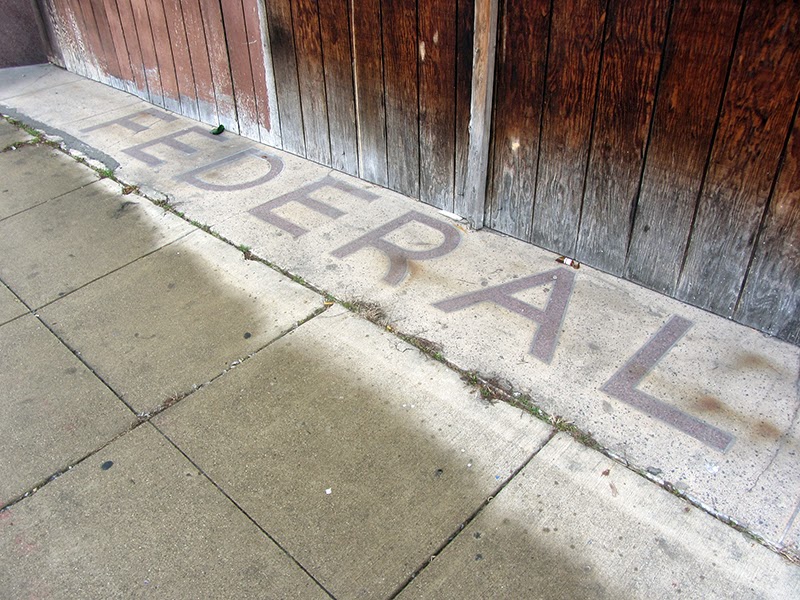 The book Art Deco in Detroit by Rebecca Binno Savage and Greg Kowalski explains that Federal Department Stores was once a chain that got their start here in the 1920s, and had snazzy art deco-styled, neon-lighted locations all over the city, and almost all of them were designed by prolific Detroit architect Charles N. Agree, who also designed many other more famous structures across the city, such as the Grande Ballroom, Vanity Ballroom, and Whittier Hotel.

I saw this bumper sticker somewhere in the Packard Plant, many years ago:

The Federal's in suburban Ferndale at Nine Mile and Woodward Avenue looked identical to this one at Grand River & Greenfield. Federal's had locations in other Michigan cities like Flint, Lansing, and Kalamazoo, and even as far away as Toledo, Cleveland, and Buffalo. According to another book by Sidney Bolkosky, Federal's was owned by the Israel Davidson family; evidently being a Jewish-owned department store was something of a novelty for Detroit according to Bolkosky. 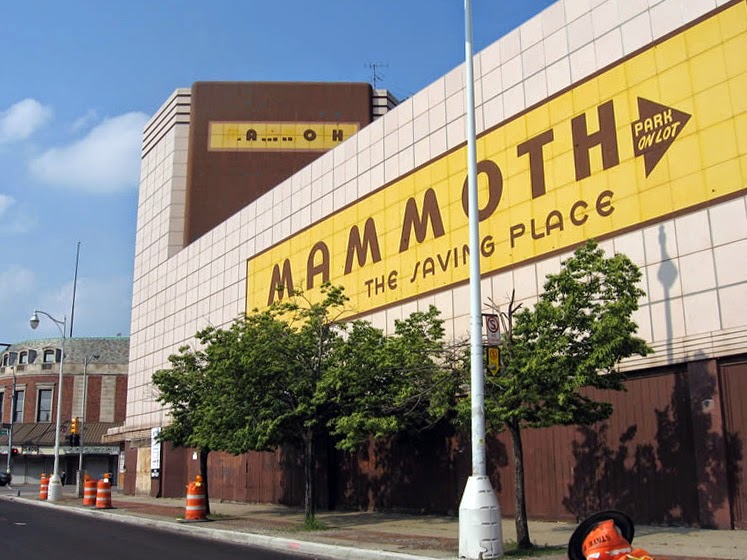 Federal's had 12 neighborhood locations in the city, but none of them were downtown; they were a blue-collar oriented department store alternative to the higher-class downtown giants such as Hudson's and Crowley's.

There was also a Federal's at Grand River & Oakman that was across from a Sears, and I believe I read that there was a tunnel running between them or something to that effect. 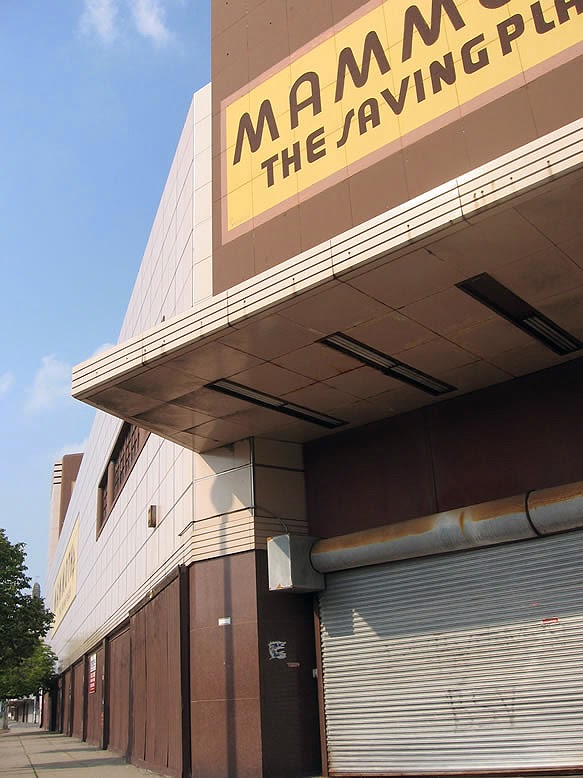 A loose board parted, and we found ourselves standing inside of a big window display, on a big turntable:

We quickly found a mouse-hole that led into the rest of the building, which was mostly a gigantic open space that was lit only by a single "Jesus ray" stabbing down from a hole in the roof: 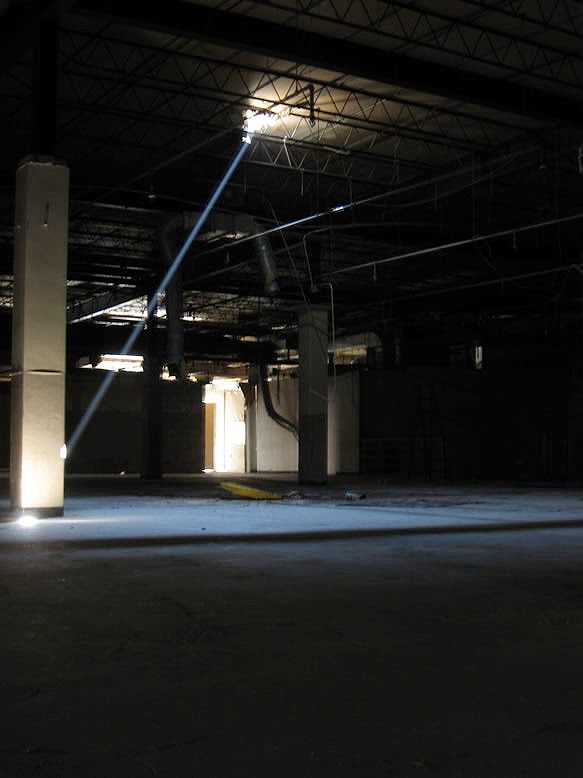 In 1937 the "sit-down" strike craze was sweeping the nation in the wake of the great Flint Sit-Down. Soon non-automotive factories, hotels, and even five-and-dime store employees were sitting down for better wages and conditions. The Encyclopedia of Strikes in American History says that even the larger chain retail stores had sit-downs, especially in Detroit where the strike fever was hottest, and Federal's was one of the ones that was struck, as well as Lerner's, Allen's Shoes, and Crowley Milner's. 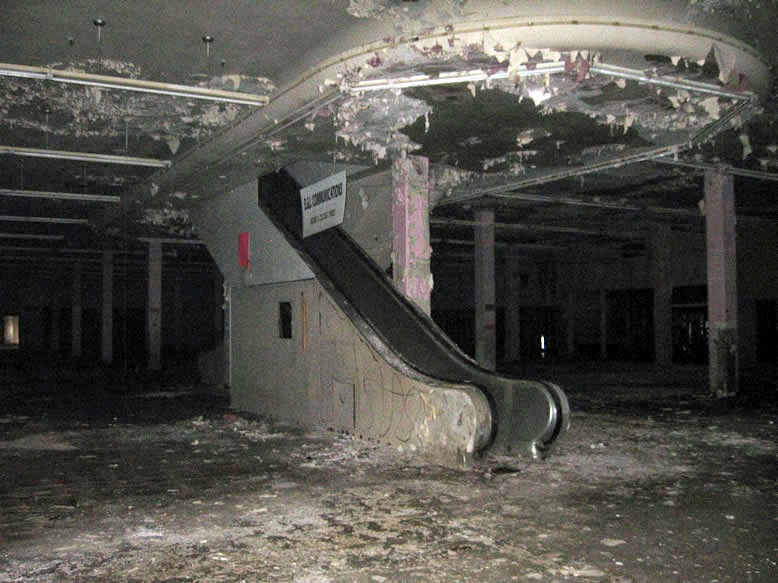 These were usually brief and quite peaceful strikes, but unlike the sit-downs in the factories, these retail store strikes were far more visible to the average everyday person...instead of hearing about some strike on the radio or in the paper, the average person actually encountered it face-to-face, and it interrupted their daily routine, which made the movement all that much more powerful. A lot more of the general public came and went from Federal's Department Store on any given day than came or went from a car plant.

I discussed the incredible galvanizing impact of the sit-down strikes and the organized labor movement on Detroit in older posts about the Kelsey-Hayes Wheel Plant, the Ternstedt Plant, and the Slovak Home. 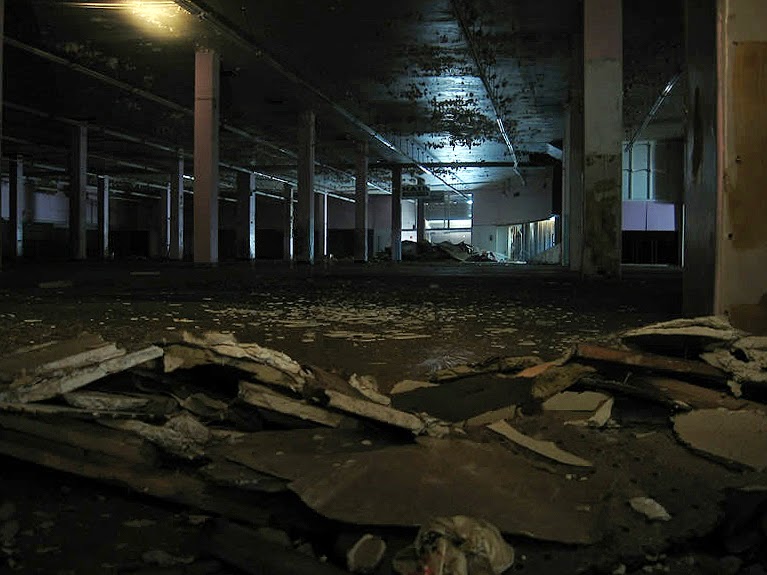 During the 1950s, Hudson's and Federal's both "accelerated their hiring of blacks very visibly," according to a book by B. J. Widick. Hudson's had previously been known for their "brown bag test" hiring standard; if a black person's skin was darker than a paper bag, they would be refused employment--or so my mother told me. Usually they were only allowed menial service jobs, the most prestigious of which was being an elevator operator. 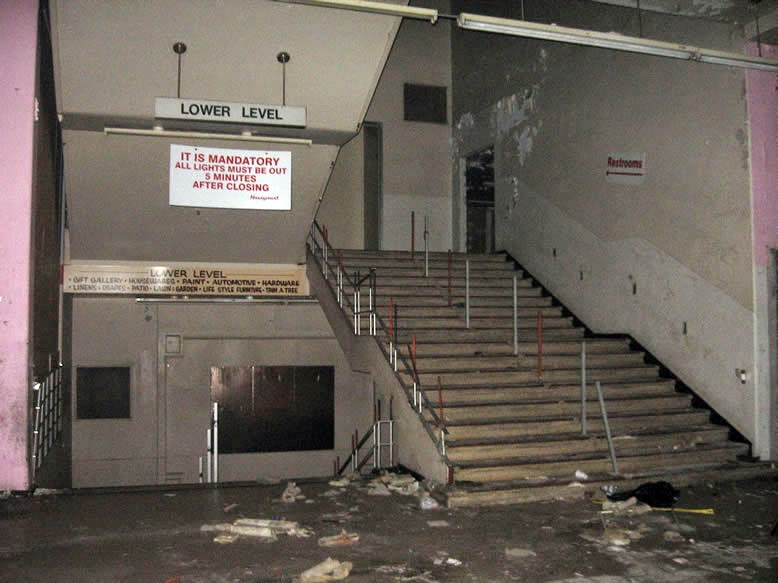 A spread in the February 1964 issue of Ebony magazine tells the story of Yolande H. Chambers. She was a black woman who moved to this neighborhood from Norfolk, Virginia in 1960, and who Federal's hired right to the top of their organization as vice president in charge of personnel, because of her legal training and administrative experience in Detroit's Neighborhood Conservation program. Photos illustrated Mrs. Chambers' many duties, and it was easy to see that the photographer was showing how she was in a supervisory position over many whites, which was still a very rare thing back then. At the time, Federal's had 5,000 employees. 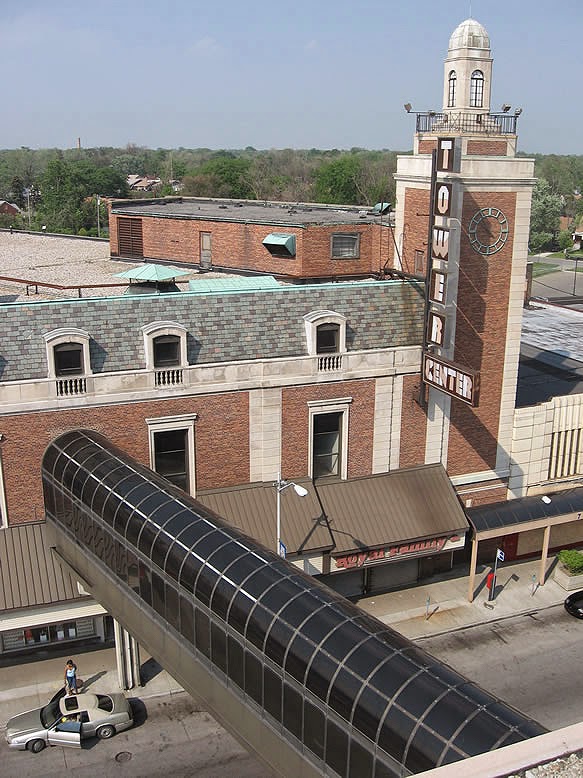 By the looks of this store across the street, it may have been originally built as a Montgomery Ward's.  The view is north, up Greenfield: 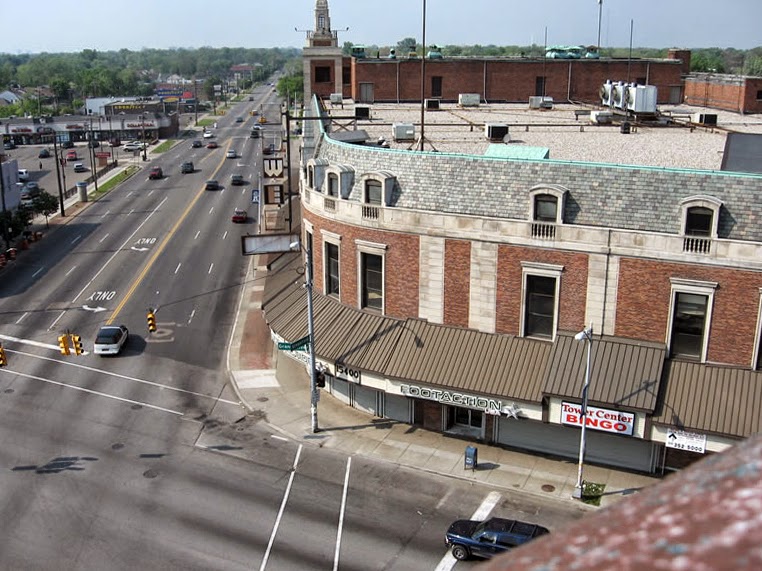 Looking down Grand River, the downtown skyline is hidden in the summer haze, while the brick bulk of the old Michigan Bell Telephone "VErmont" exchange office is seen at right: 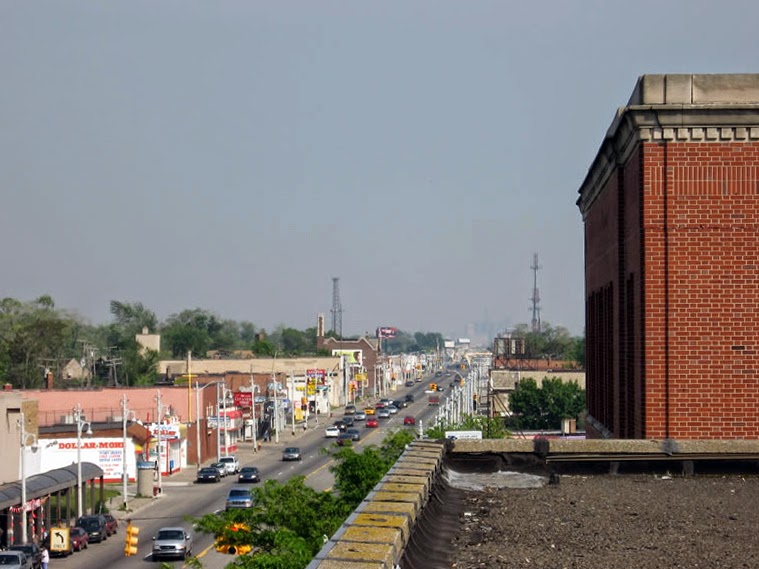 Federal's Department Stores filed for Chapter 11 bankruptcy protection in 1972, and closed most of its far-flung stores, to concentrate on saving its flagships in Detroit and Flint. Federal's was purchased in the late 1970s by "self-help guru" Steven West. Youtube has an old TV commercial for Federal's from 1978, advertising a Thanksgiving Day sale.

A post on the DetroitYes forum from a former Michigan Bell employee said he recalled installing the phone system in this building when Mr. West consolidated the Federal's main corporate offices into part of the second floor. Apparently then, it would seem this was Federal's last stand. 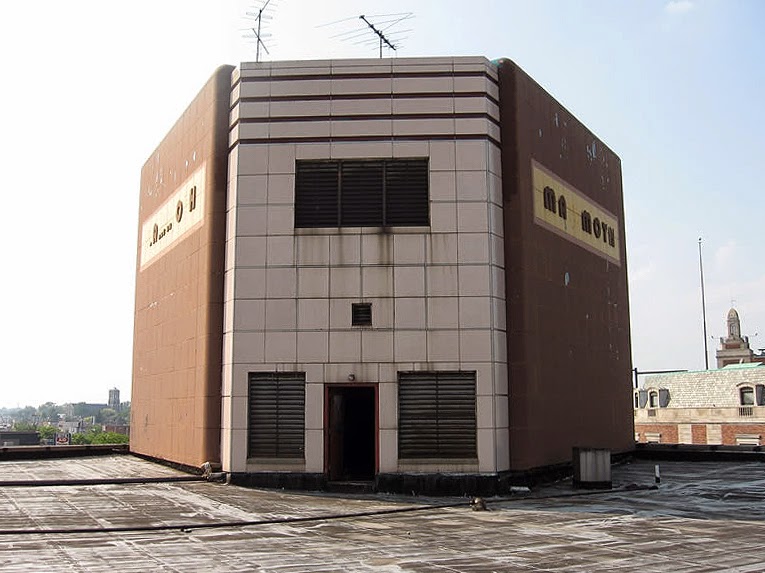 Unfortunately West's enterprise wouldn't last long, and was dissolved in 1980. This store was then taken over as a Kingsway department store location but that too closed in 1990. After that it was bought again and became Mammoth Mall, until it closed for good in 2005. 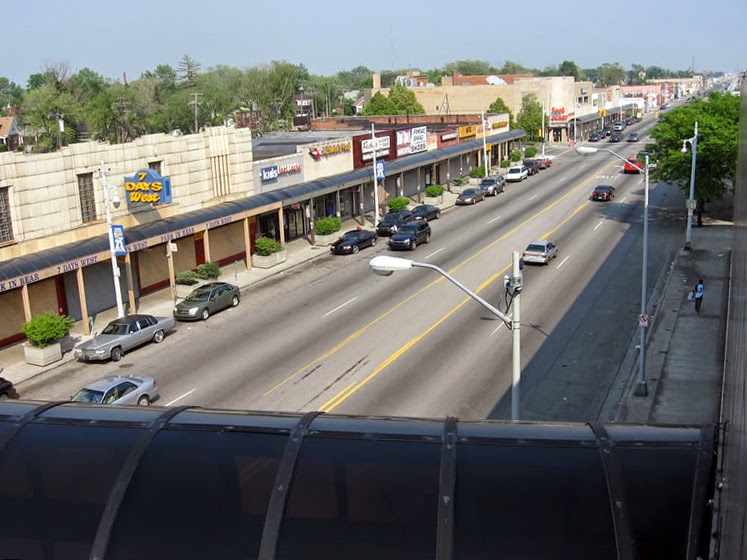 We really didn't find anything of interest in this entire place, except for one remote corner of the smelly basement, where there was one lone store display left behind...a vintage Star Wars figurine display shaped like Darth Vader, in perfect condition:

I figured that had to be worth at least $100 to some geek somewhere, and we hauled it upstairs to loot it, but at the last minute we decided to leave it behind. Perhaps some other person later found it and made some money off of it. A quick Ebay search isn't turning up anything like it, but judging by the prices I'm seeing on some other stuff, I'd say this thing might have brought four figures...

A sign that said “Forman Mills Coming” was posted on the building in 2011, but so far I haven't seen any progress. At least the place has remained basically secured and hasn't been torched yet. To this day there still has never been a real "mall" built within the city limits of Detroit, unless you count the RenCen.