Hit by the Bus


As far as school buildings in Detroit go, the old Mackenzie High School at 9275 Wyoming Avenue stood unparalleled in terms of its physical stature and appearance except for Cass Tech, which was of course "Second to None." Yet Mackenzie was demolished in June of 2012, so that a new modern building could be erected there.

Built in stages from 1927 through the 1930s, the old Mackenzie hardly qualifies as "old" in the scheme of things, since the vast majority of the structures still standing in the city today were built in that exact same time period.

The book does however mention that as the Great Depression was setting in, the City of Detroit remained one of Smith, Hinchman & Grylls' most reliable sources of work contracts, at least until the economy really tanked. Mackenzie, Pershing, and Denby High Schools, as well as the Mark Twain Branch Library, were that firm's big jobs for the city at the time, and Rowland also designed Breitmeyer Elementary School some years earlier.

I think it's safe to say though that if the Guardian Building were a school, it would be Mackenzie.

Mackenzie was where many prominent--and even some famous--Detroiters went to school, including actor Tom Skerritt (1951), Funk Brothers member Dennis Coffey (1959), six National Football League players, and three Super Bowl champions, all of whom were trained under Coach Bob Dozier.

Most people associate Mackenzie High School with Jerome "The Bus" Bettis however, because of his hometown hero role in the 2006 Super Bowl XL, which, notably, was played here in Detroit, to much fanfare. Bettis grew up at 10384 Aurora Street.

The book Frank Cody: A Realist in Education also makes the claim that while principal of Central High, David Mackenzie also implemented what became the first model of modern student counseling, in 1913. By breaking the student body into "houses," and assigning a counselor to each "house," it took a major burden of routine off of the principal's shoulders by essentially giving him six assistant principals--which in turn allowed Mackenzie more time to be an effective administrator.

According to the seminal book about the Detroit Public Schools, Jeffrey Mirel's The Rise and Fall of an Urban School System, Mackenzie High School was part of a racial protest in January of 1962. A redraw of district lines in 1961 suddenly excluded a group of black Sherrill Middle School eighth graders from graduating to the all-white Mackenzie High School. The Sherrill blacks were sent instead to Central and Chadsey High Schools, which were almost all black, and further away from their homes.

The parents organized, the NAACP got involved, and a lawsuit was filed against Detroit Public Schools, alleging that the school board was operating a de facto segregated school system. As a result, changes were enacted upon the DPS in terms of hiring practices and resource allocations, and all the while Detroit continued to get "blacker"...or, less "white," anyway, as whites moved to the suburbs rather than let their kids mingle with those of other races.

You know the rest of this story; we've heard it a thousand times...the '67 Riot occurred a few years later, and Detroit went into an undeniable tailspin before it finally crashed and burned in bankruptcy in 2014. During that fiery week in July of 1967 McKenzie sat a mile outside of the battle zone, but I'm sure emotions ran high in the students as their eastern horizon was completely blotted out with black smoke while Grand River Avenue burned.

Mirel cites an article that says that the principal of Mackenzie was forced out of his post in the second semester of the 1968-'69 school year as the result of "protest and controversy," and that the same thing happened at two other schools.

Mackenzie was the site of another large demonstration in March of 1971 against cuts made that seemed to unfairly affect majority black-attended schools. By this point it seems as though Mackenzie had already swung toward becoming mostly black, and students actually took over the school to protest a majority white school board governing a majority black district, and so that "black militants" could demand changes in staff and curriculum.

According to Mirel "the Detroit desegregation trial" began in April of 1971, since apparently the district was still galvanized along racial lines even after the aforementioned lawsuit in 1962. Racial violence between students also broke out at Osborn High School, where Detroit Police made 15 arrests, after white students antagonized and attacked protesting blacks. 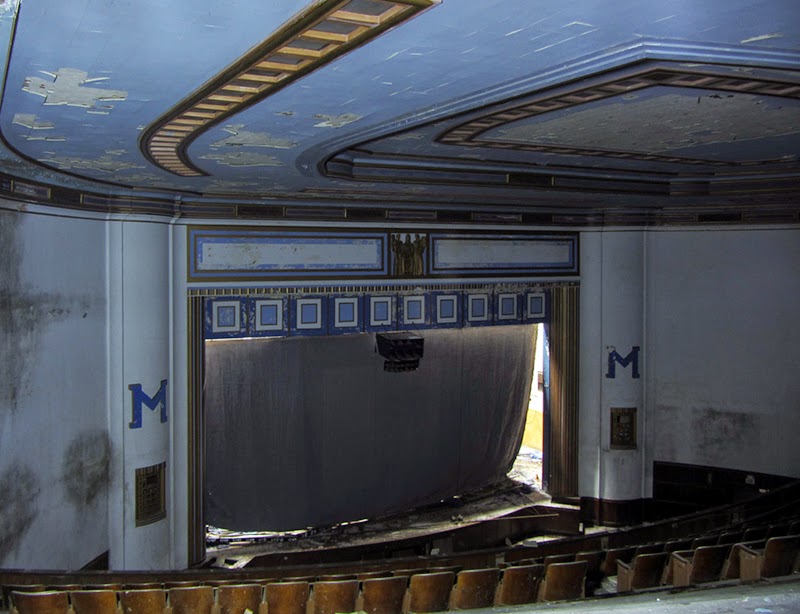 On a different note, Hollywood and TV actor Tom Skerritt may have played on this stage before he was famous. Skerritt is perhaps best known for his roles in such well known Hollywood movies as M*A*S*H*, Alien, Top Gun, A River Runs Through It, Cheech & Chong's Up in Smoke, and Stephen King's The Dead Zone. Skerritt also guest-starred on the popular TV shows Bonanza, Gunsmoke, and Cheers. 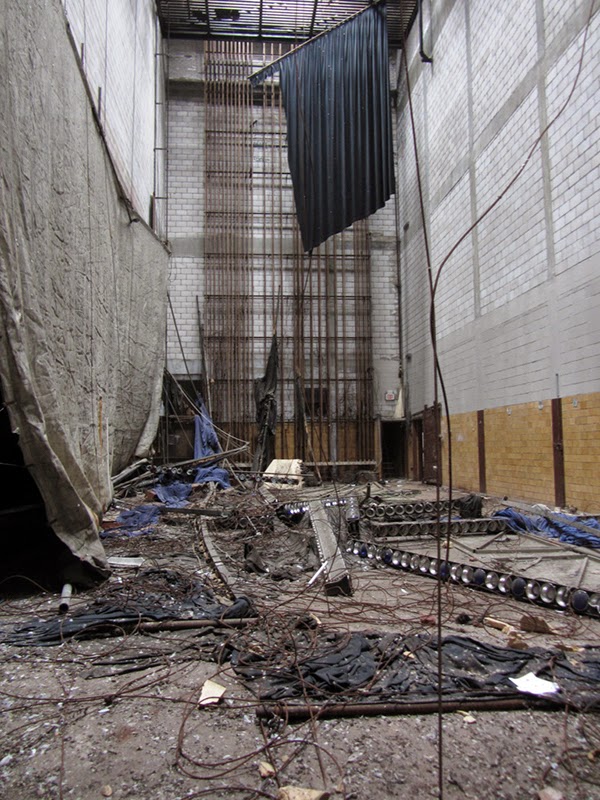 He grew up at 12003 Cheyenne Street, according to the book Home in Detroit. Another famous actress, Ellen Burstyn, lived around the corner from Skerritt when they were both about six years old, but she attended Cass Tech, not Mackenzie. Incidentally, another M*A*S*H cast member, Harry Morgan grew up nearby at 198 Rhode Island Street in Highland Park.

The top of the auditorium led to roof access.

I love how sometimes, in out-of-the-way areas that the public never sees, the builders will use up some scrap mismatched materials such as the beige bricks seen in the previous photo.

The Barton-McFarland neighborhood around McKenzie was still basically hanging on for the moment, and there was a decent view of it from the roof:

As you can see this place was in almost immaculate shape, but for some reason the DPS decided that it needed to be torn down at great expense, and another *new* school built in the same spot, also at great expense. But hey--we "created" like 50 (temporary) construction jobs, right?!

Look at this art-deco powerhouse...the snazz factor is off the charts:

Might be a little too snazzy though, if you know what I mean. Better tear it down, just to be on the safe side--we wouldn't want our children to be distracted by inspiring architecture. You remember what happened when we gave them colored chalk, right?

Here's the clock that faced out over the football field...like the rest of the building's cornice, it's made out of glazed, multi-colored terra-cotta blocks:

Some top pieces are missing however, because there was copper flashing under there that someone needed to perform some alchemy on. Apparently you can now transmute copper directly into crack cocaine...maybe it's because they both start with "c"...or at least that's what I remember from chemistry class anyway.

Going back inside, here was some small lecture room, or perhaps choir room? 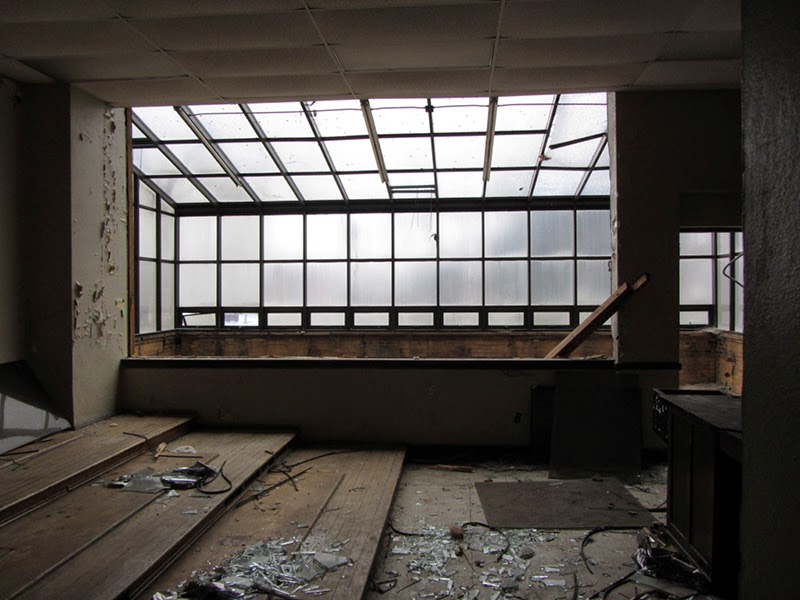 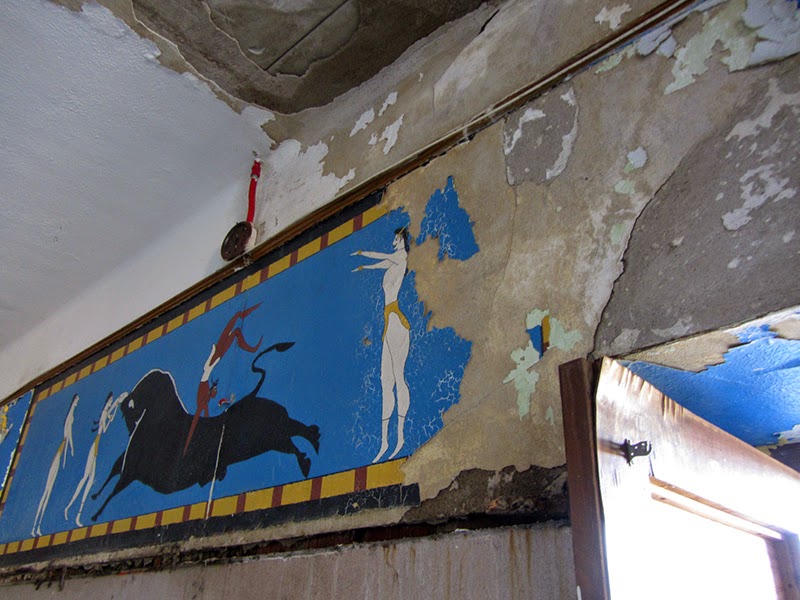 The Stags are Mackenzie High's mascot:

Gym floor is looking a little wrinkly there...I bet it would've been fun to skateboard on.

Locker rooms near the pool...with the lockers "mysteriously" missing: 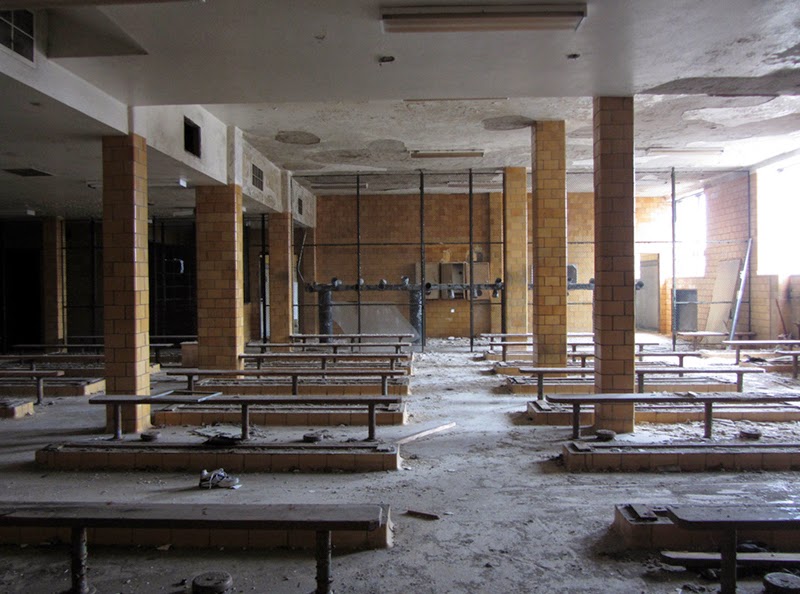 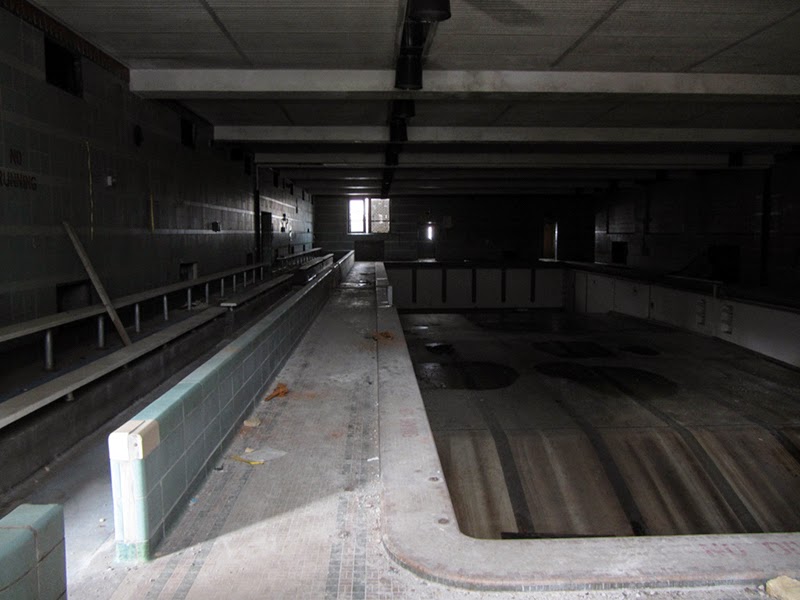 "You Can't Hide That STAG Pride":

These gorgeous built-in wooden cabinets that are found in almost every Detroit Public Schools classroom are one of my favorite things about exploring school buildings...

...despite the fact that it would cost a medium-sized fortune to build classrooms like this today, all of these cabinets are being sent to landfills. Not even the most expensive Pulte-built house in Novi has cabinets this good.

Then there are the sheets and sheets of pristine marble...thousands and thousands of dollars' worth....which Detroit taxpayers paid to have put in a landfill:

If I recall correctly this may have been the ROTC drill hall:

There were many modern additions built onto Mackenzie; this used to be a backdoor to the school, but now it merely led into an annex:

Time to hit up my very favorite part--the library.

The astute observer may recognize a very similar style of decorative woodwork here as was found in the also demolished Mark Twain Library--further evidence that this place was most likely designed by Wirt Rowland. 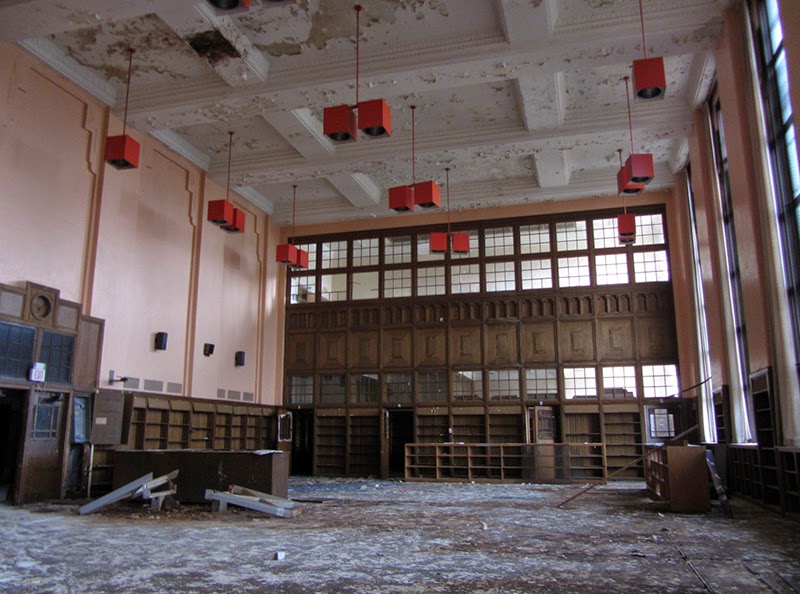 All of this immaculate old-growth wooden paneling is now in a landfill too, by the way. At least someone might have rescued the clock face:

Sorry, I just can't get enough of this...

This landmark has been wiped from the face of the Earth, so I might as well post every photo I've got. 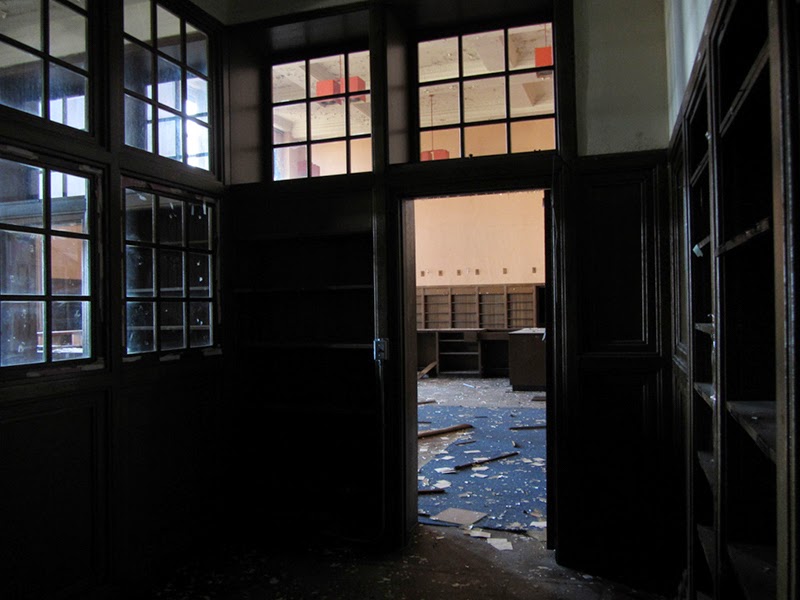 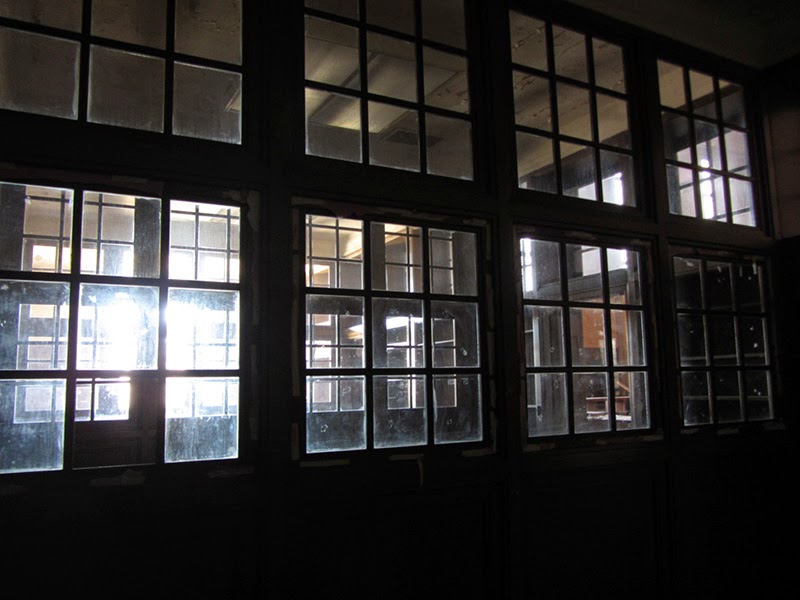 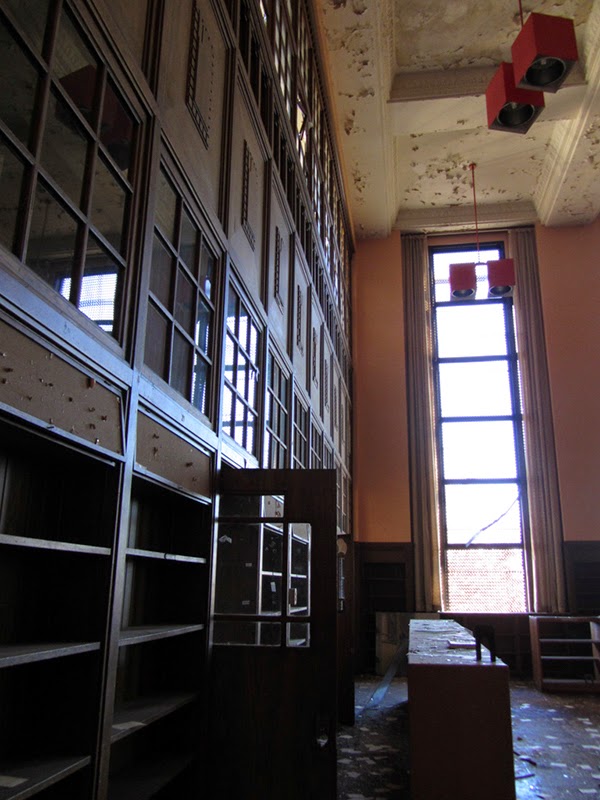 It's amazing what good shape this school was in; renovating it would have cost far less than demolishing it and building another one, but hey--when you're the DPS, you can spend money on whatever you damned well please. 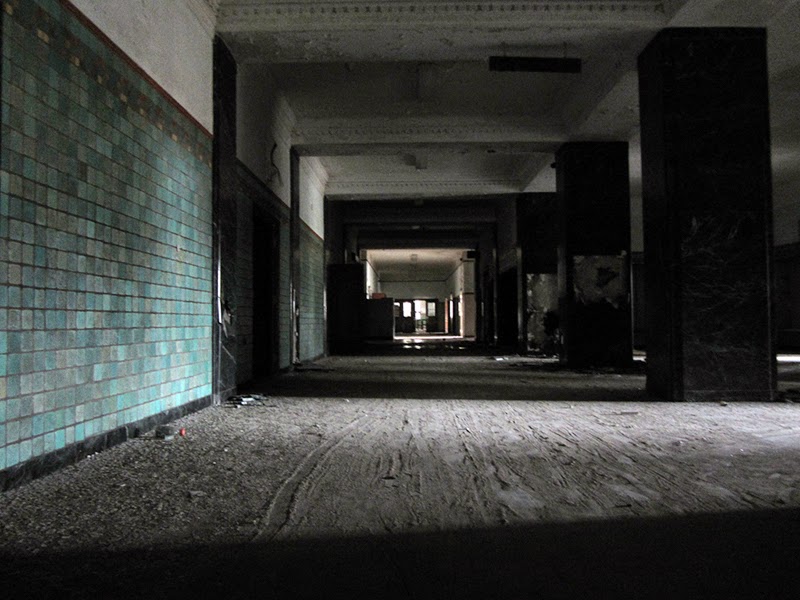 Heading back toward the front lobby and administrative offices, I noticed there was a lot of fancy tile and marble. Of course it was dark and I didn't have a tripod, so enjoy this incredibly amateur photo of a Pewabic tile fountain taken while my camera was balanced on a book: 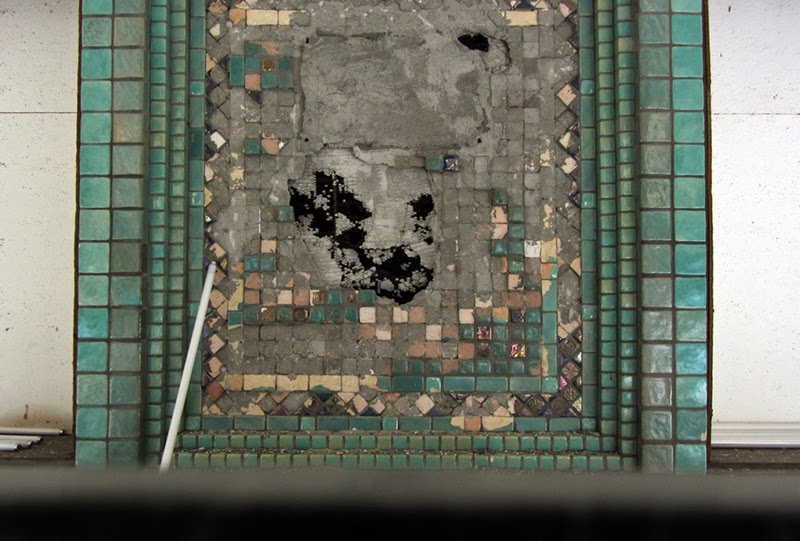 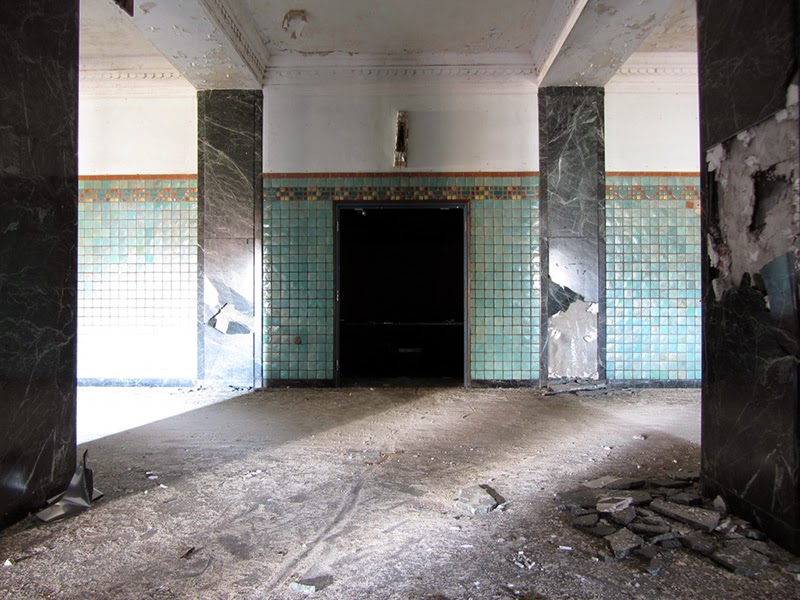 Happily, not all of it went to the landfill or scrapyard...

When demolition became imminent, I rescued one of the massive, intact hunks of glazed orange terra cotta that made up the school's cornice, but which had been ripped out by some scrapper because there was copper flashing underneath it. It weighed about 50 or 60lbs, but I carried it out nonetheless.

The clock from the principal's office now also resides on my dining room wall. I figured the nice rusty / peely-paint patina was perfect as it was. It was driven and synchronized by a central pneumatic system that controlled all the clocks throughout the building, but I have designs on buying a generic battery-powered clock motor to retrofit it and make this baby tell time once again. 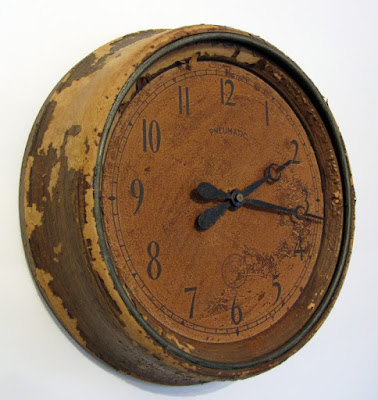